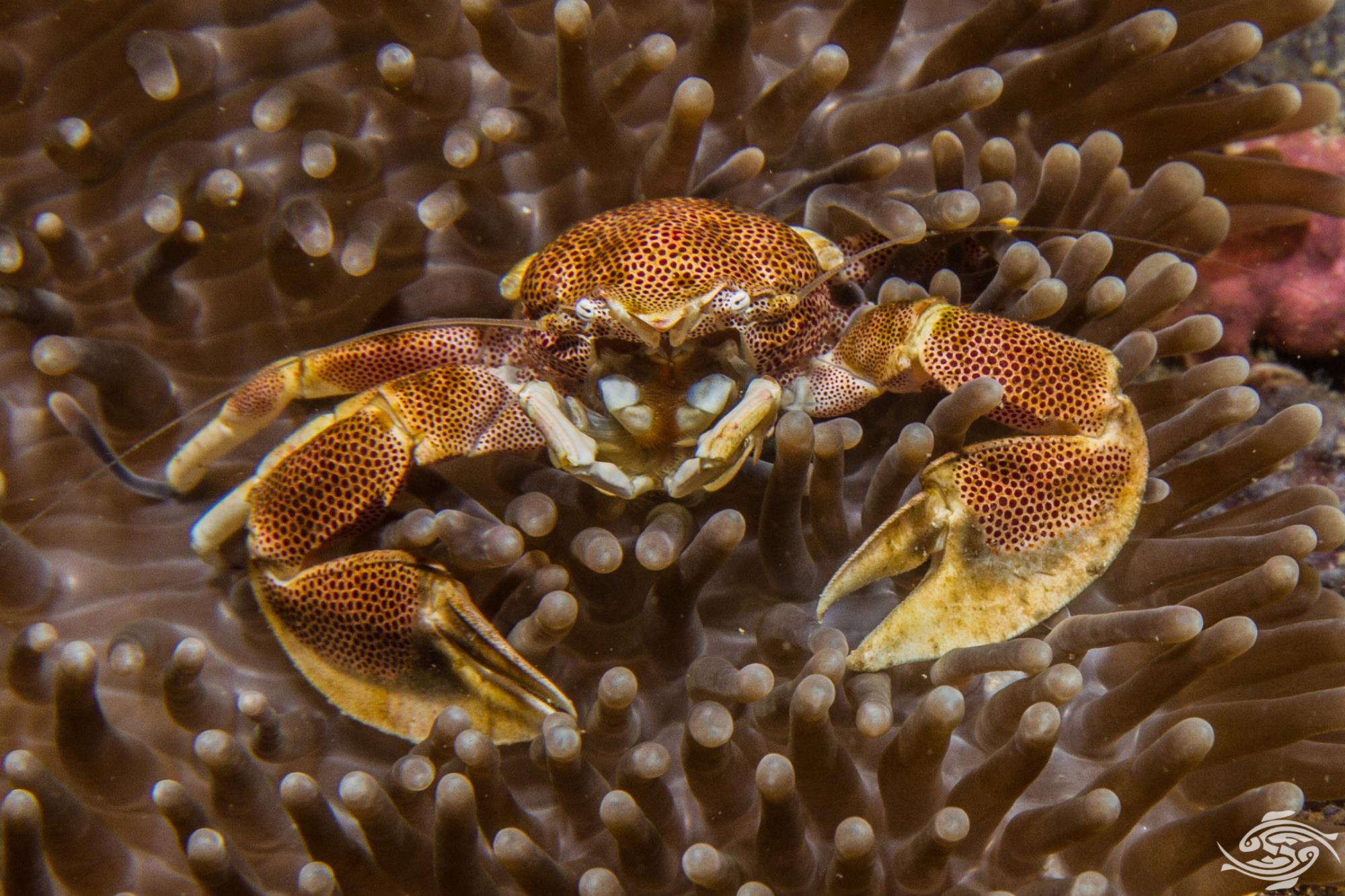 The second is that the white edges of the crab resemble porcelain. They are much prettier just after a shell change as algae grows on their shells, as can be seen in the image above. Their proportionally large claws are used for protection and territorial fights with other crabs rather than for catching prey. 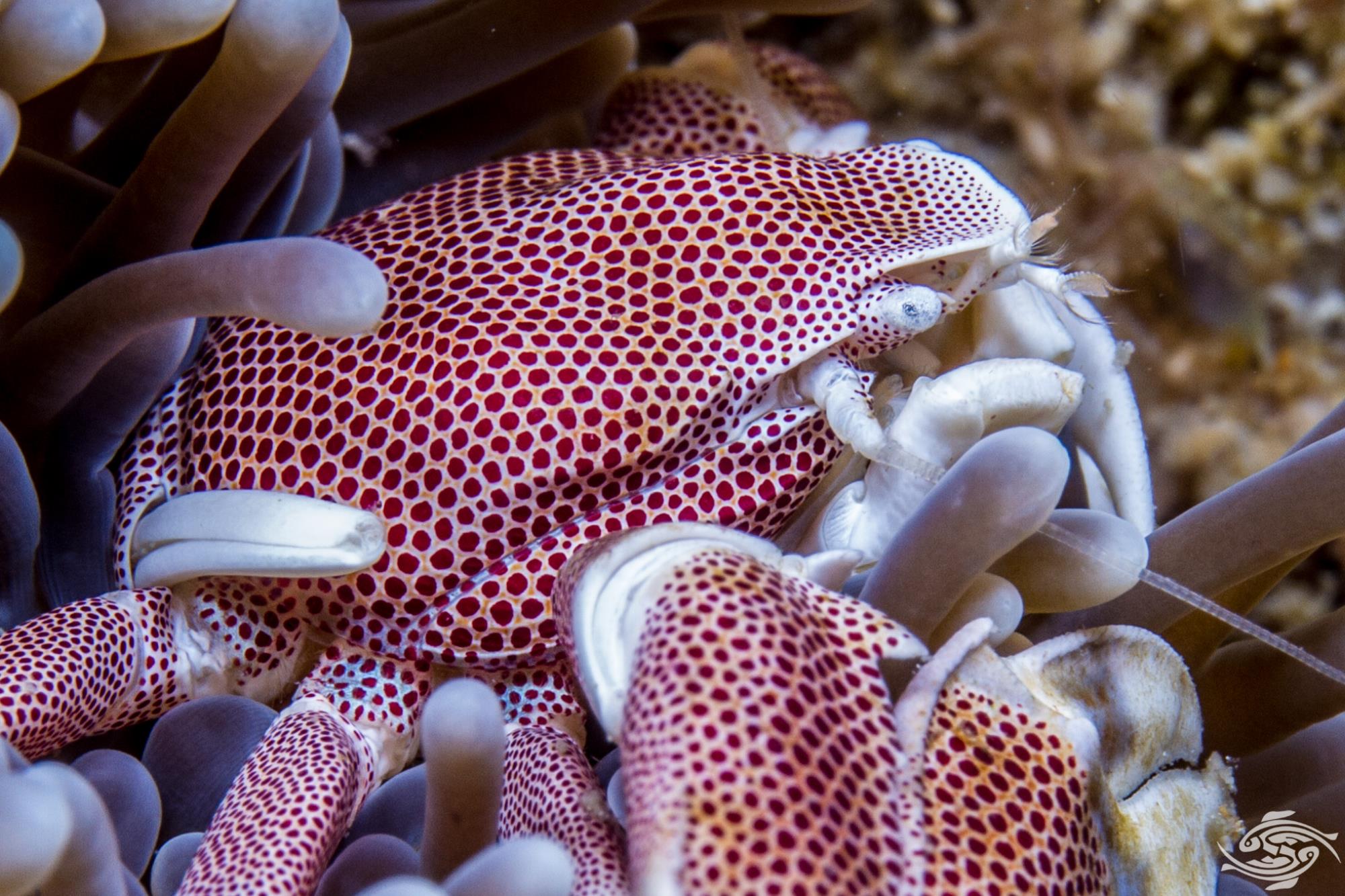 The mouth parts have evolved into finely laced fans which can be seen in the image below. The crab opens and shuts these fans filtering its food out the water. 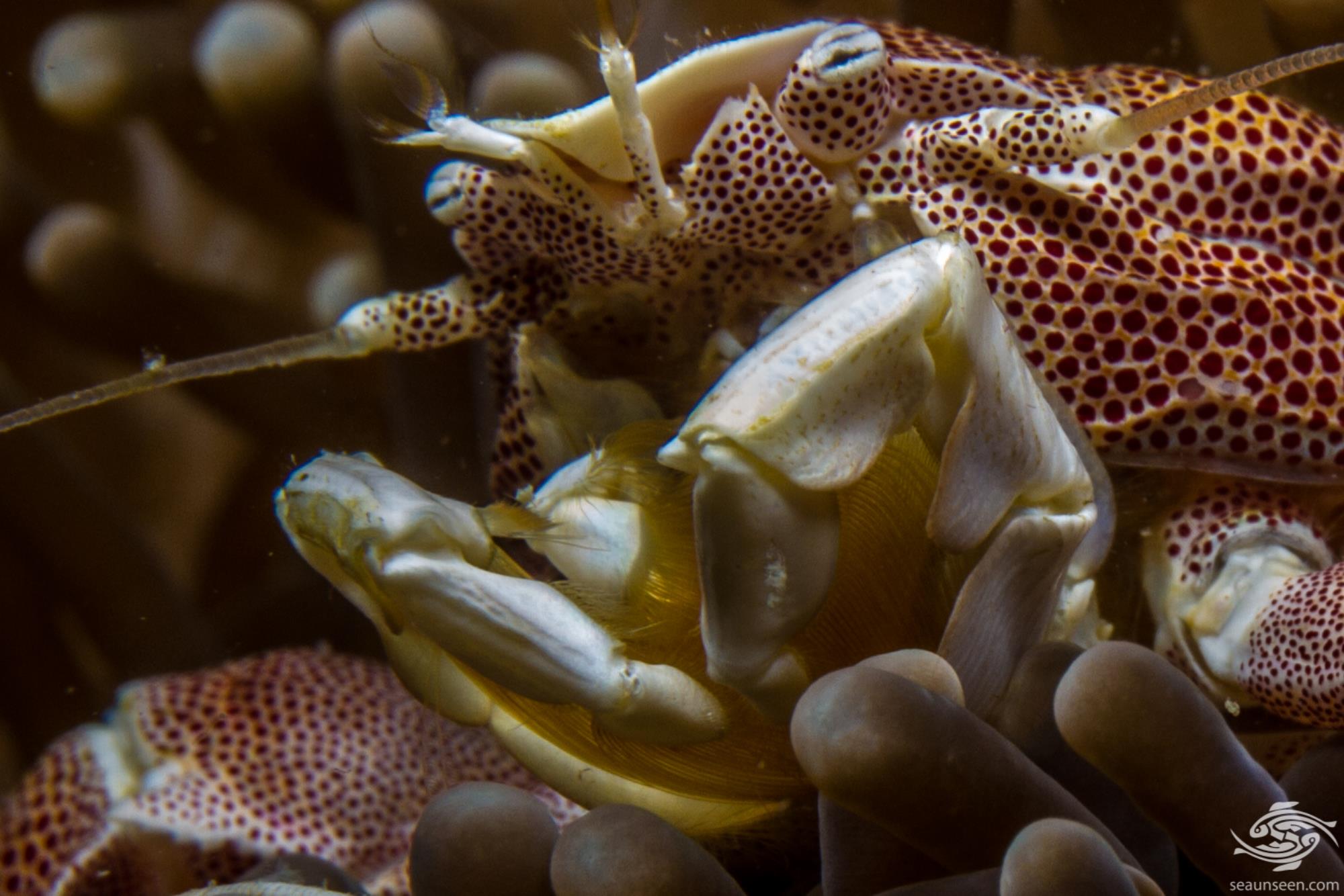 In the image below the crab is opening the fans to filter food out of the water. 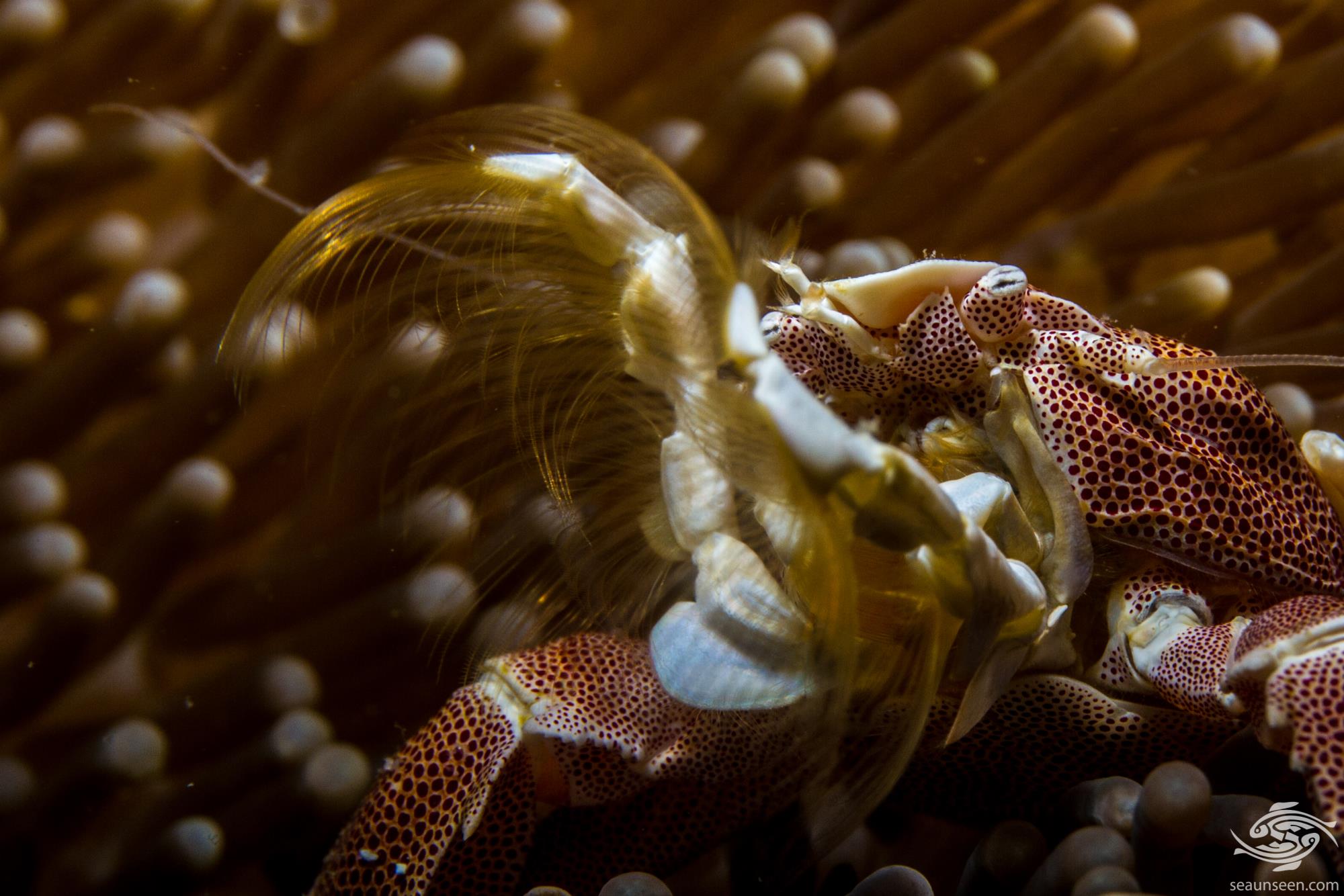 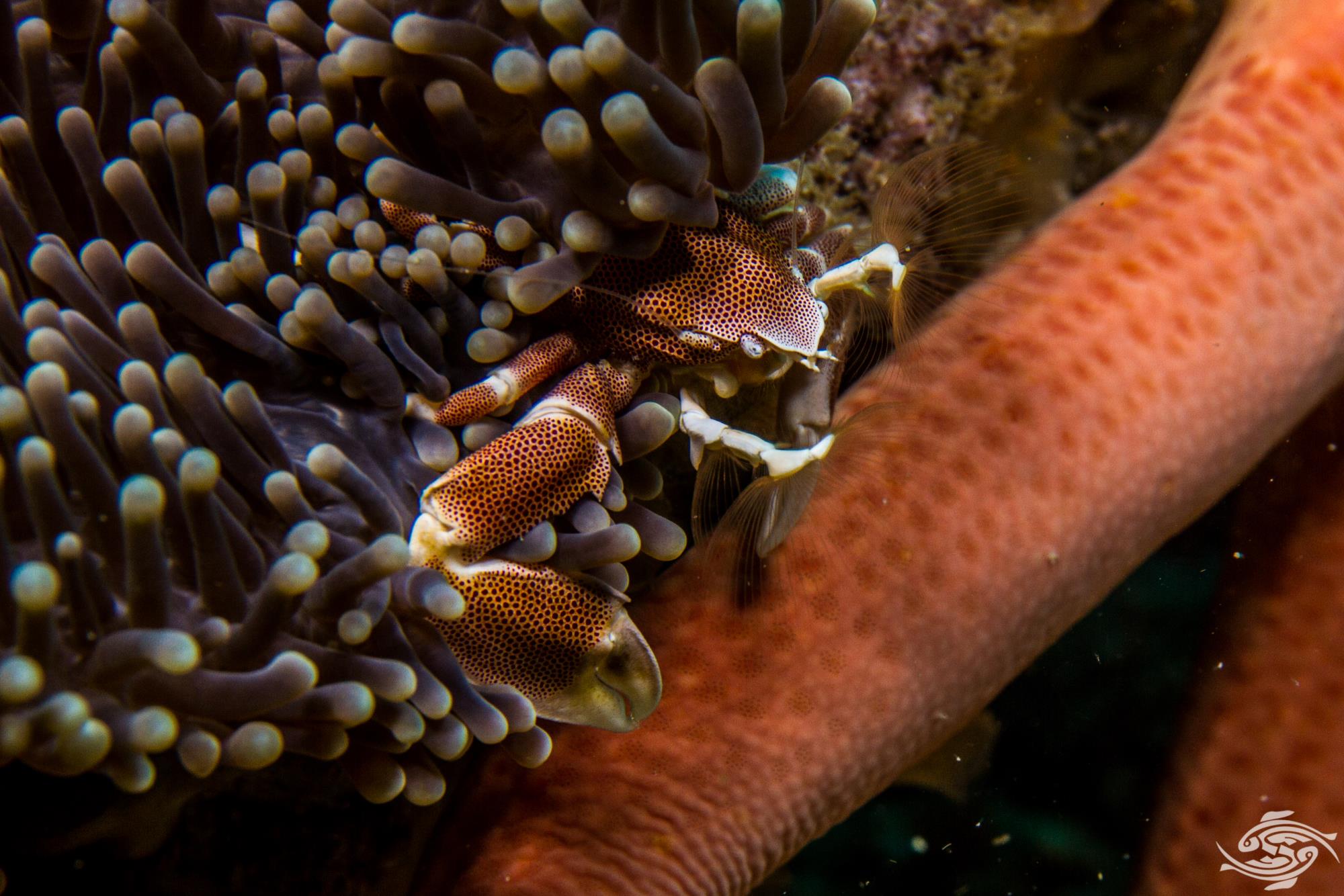 Porcelain Anemone Crabs have a whitish coloured body with red dots surrounded by a lighter red colour. Their claws are proportionally large and they have three walking legs as against a normal crab which will have four, They have a prominent set of feelers which extend outwards and the eyes are on short stalks. Compared to normal crabs the body is slightly elongated. They grow to a maximum width of 5 cm. 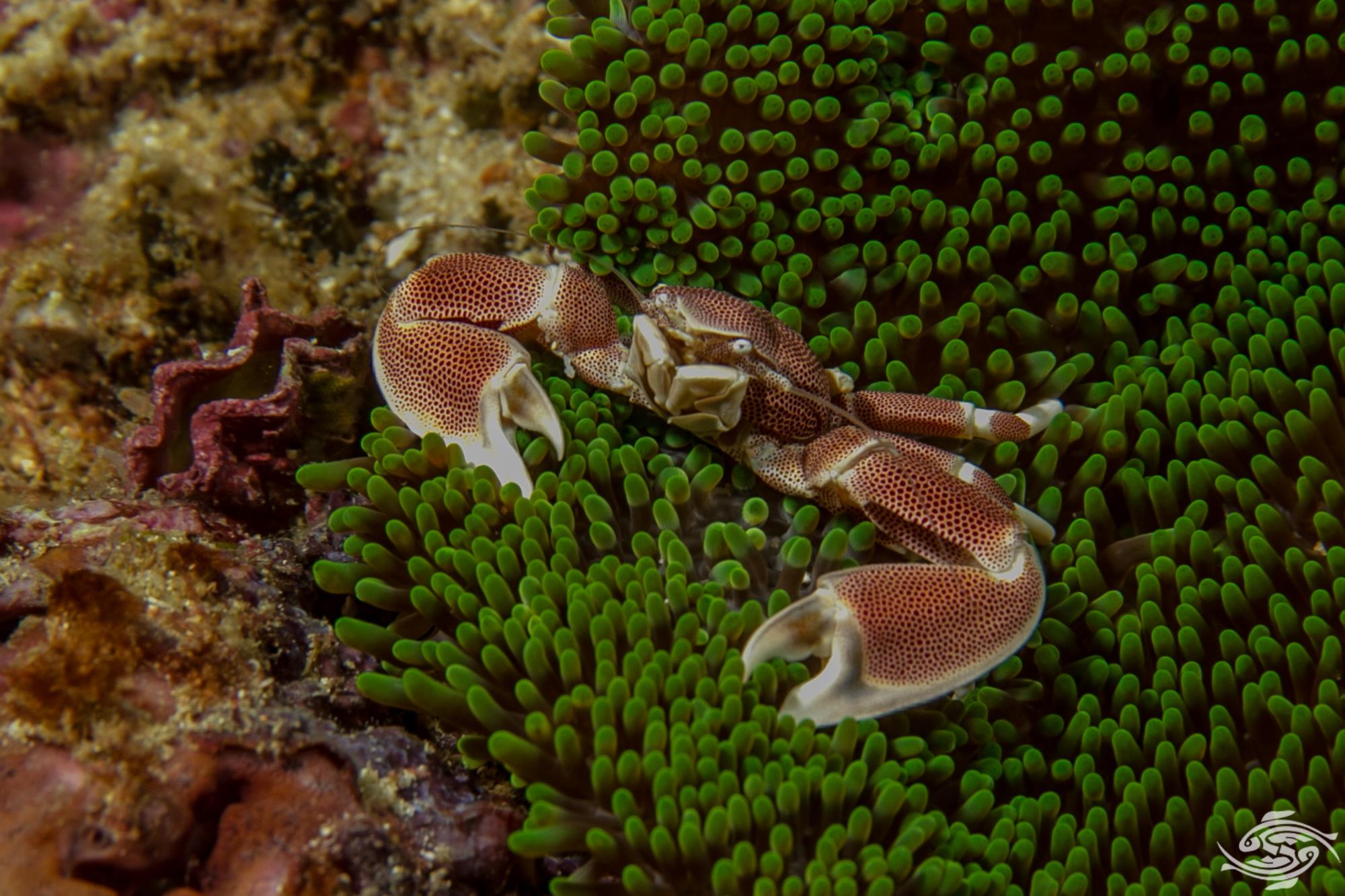 Porcelain Anemone Crabs are quite common and easily spotted if one knows where to look for them. In Tanzania they are most commonly found close to the edges of carpet anemones and adhesive anemones. It is seldom that one sees them very far from the outer edge of the anemone. This allows a quick escape from potential predators under the folds of the anemone. Very few if any predators venture beneath an anemone. Carpet and Adhesive anemones have a particularly powerful sting. In Tanzanian waters one often encounters large carpet and adhesive anemones in the rubble areas between the reef and each usually has at least one pair of Porcelain Anemone Crabs in it.

If one looks around the edges on any of these species of anemones one is likely to find at least one pair but they are quite reclusive often hiding at the sight of a diver. On one extremely large adhesive anemone, I once found three pairs, spaced equidistant around the anemone. Often when one goes close to view or photograph them they will hide under the folds of the anemone.

It is quite fascinating to sit and watch them feeding, flicking their fan like mouth parts open and shut. The resident clownfish in the anemone usually seem to tolerate the crabs as long as they are not laying eggs. If the clowns are laying eggs then the crabs and just about everything else in the vicinity is chased away. 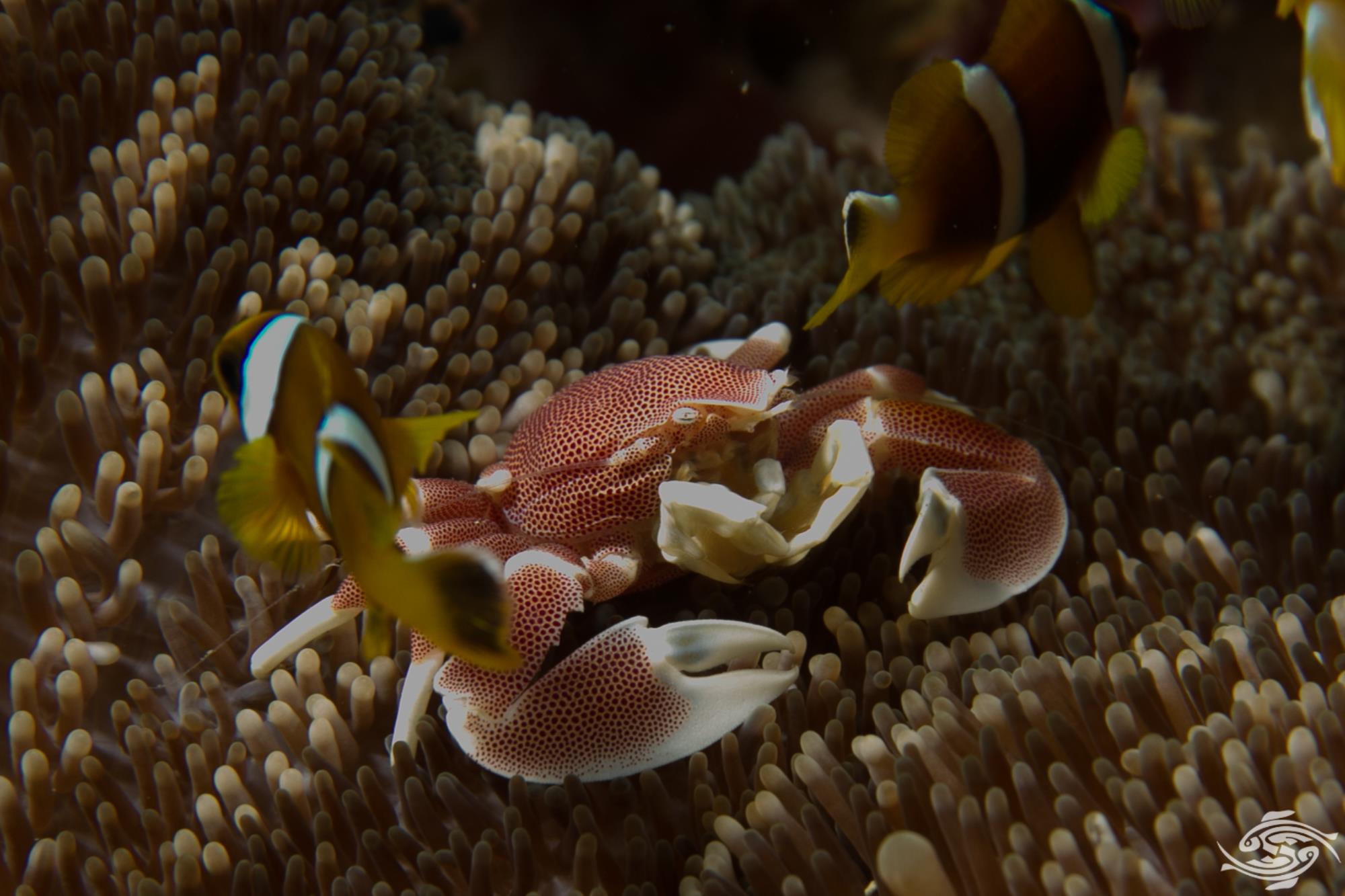 The Porcelain Anemone Crabs are found on coral and rock reefs across the Indo Pacific area. Generally they are only seen on anemones. Sometimes one sees porcelain crabs in the branches of coral but usually on close examination these are a different species. 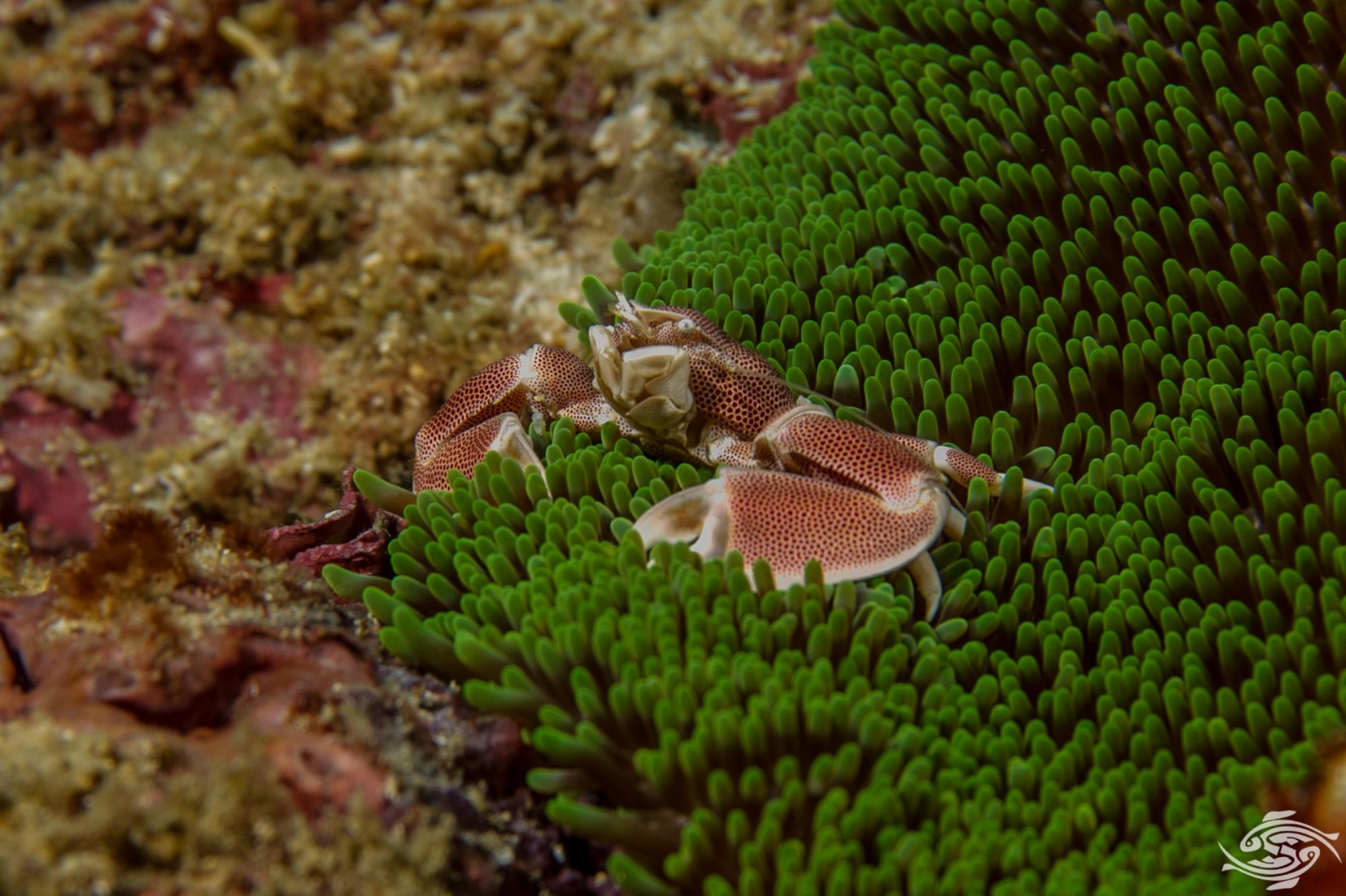 Porcelain Anemone Crab are filter feeders and filter plankton out the water. They are also said to eat mucus given off by the anemone and clean up any debris from within the tentacles. In the image below the  fans on the mouth attachements can be clearly seen. Small pieces of debris and planktonic organisms are filtered out of the water table by repeated fast movements with the fan. The fans are retracted back towards the mouth and the particles are eaten. 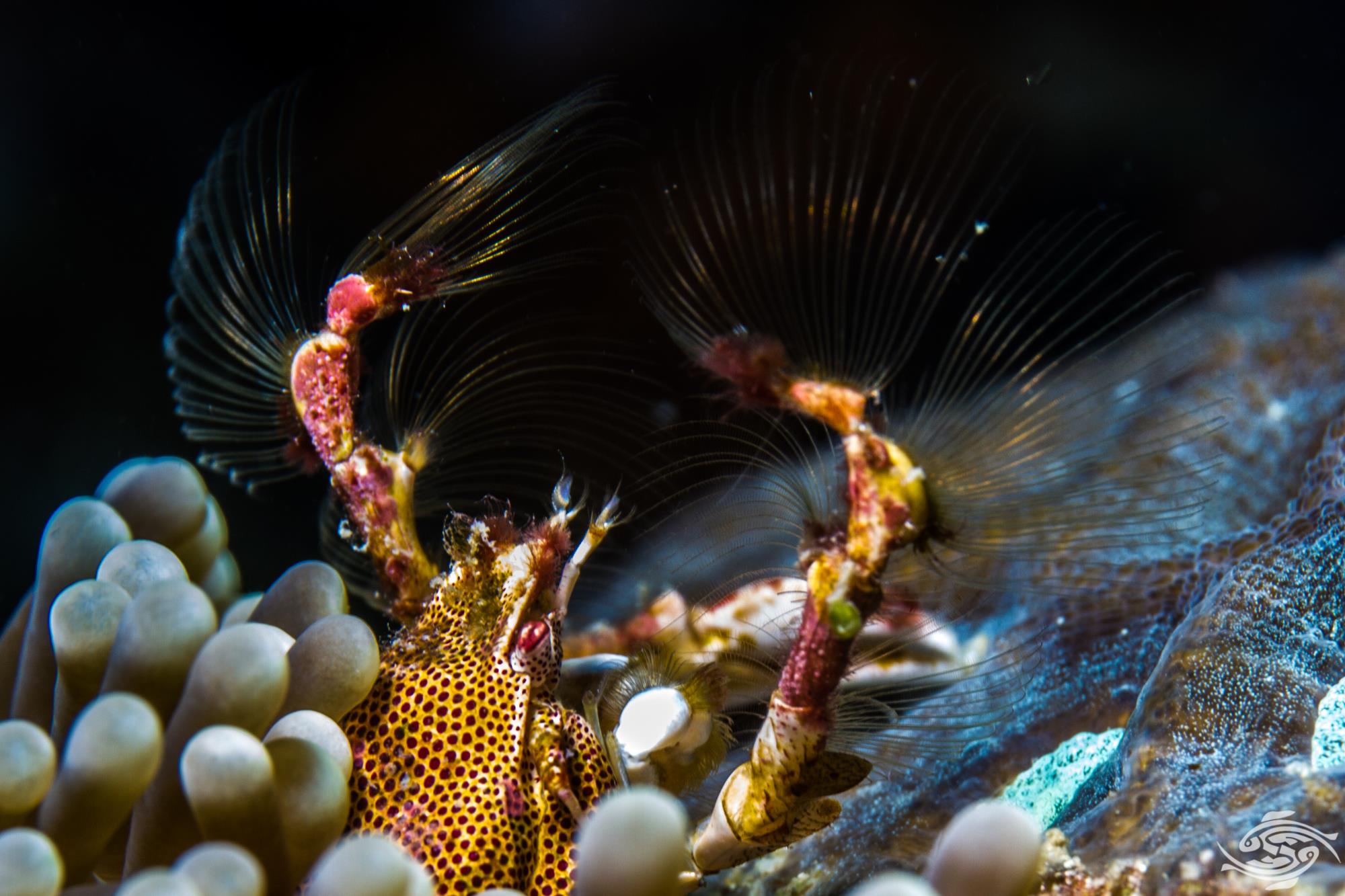 In the image below the fans are folded in. 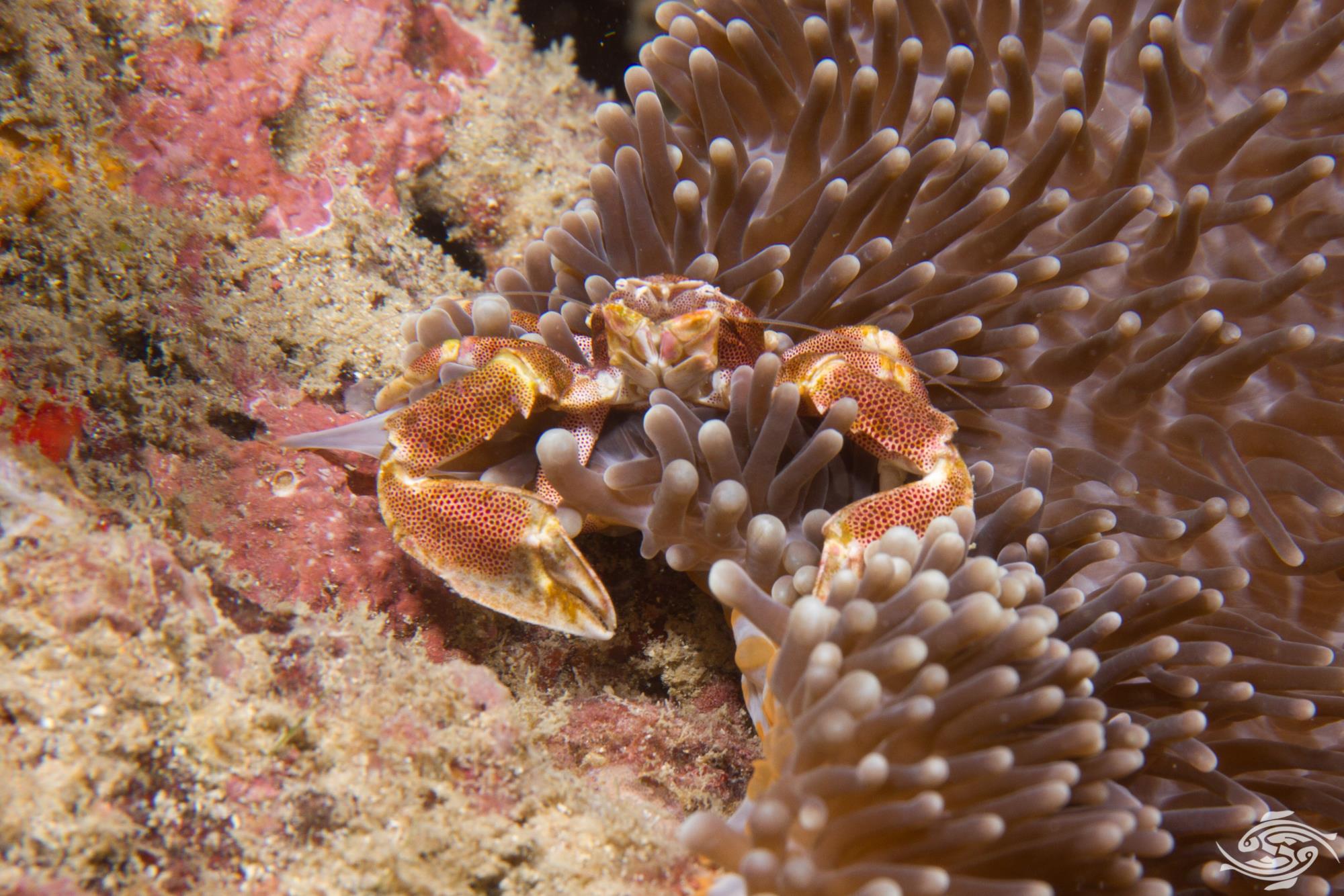 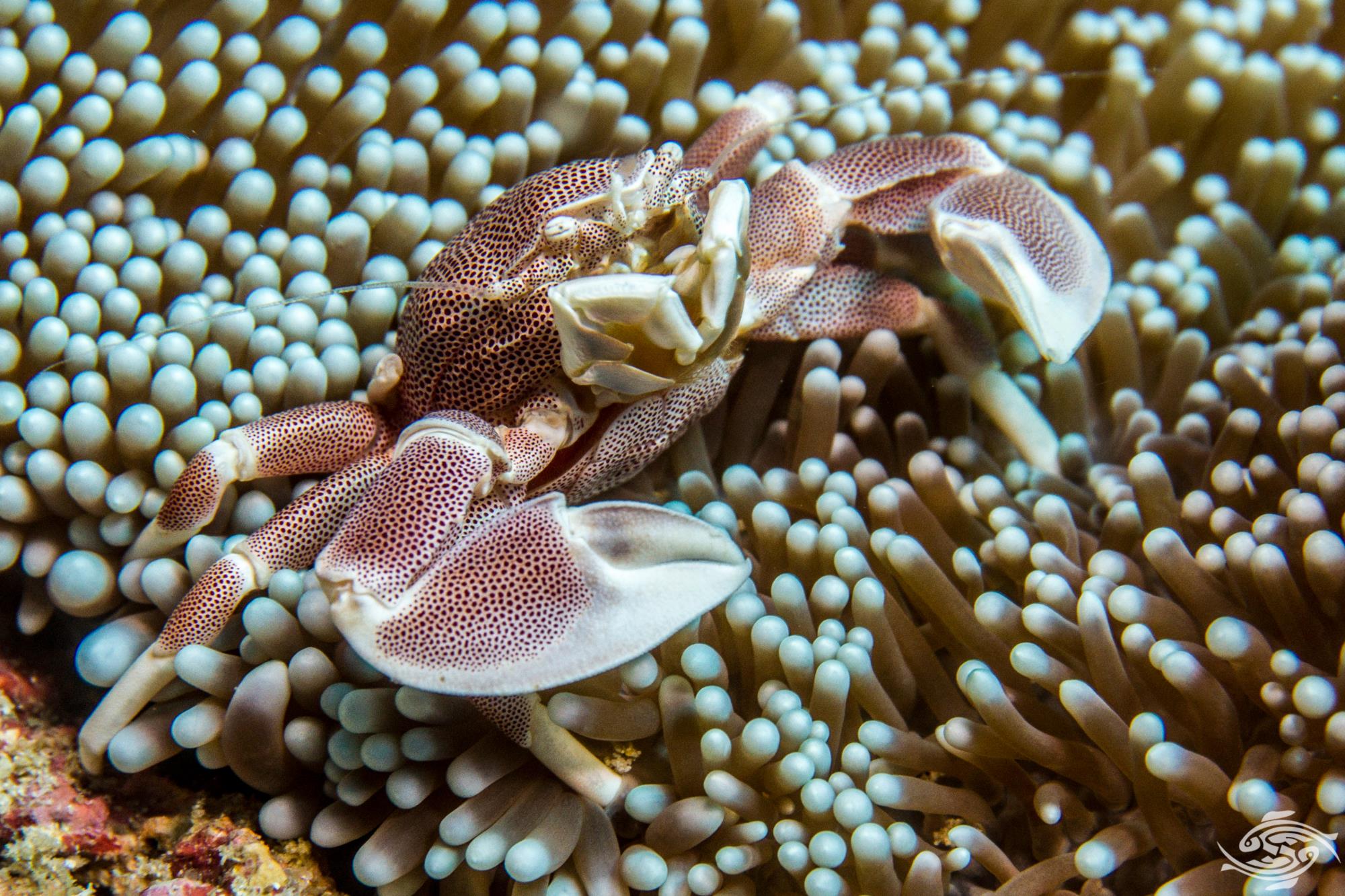 Porcelain Anemone Crab can be kept in an aquarium. Because they are filter feeders they are quite peaceful. Although they do not necessarily require an anemone as a host, they are happier if they have one. Because they also eat mucus from an anemone this helps provides a more natural diet.

While they are unlikely to obtain sufficient planktonic food in an aquarium it is possible to supplement their diet. They can be hand fed with flakes or pellets. Alternatively food can be left in close proximity to them. Brine shrimp can also be drop fed down a tube placed in proximity to them. 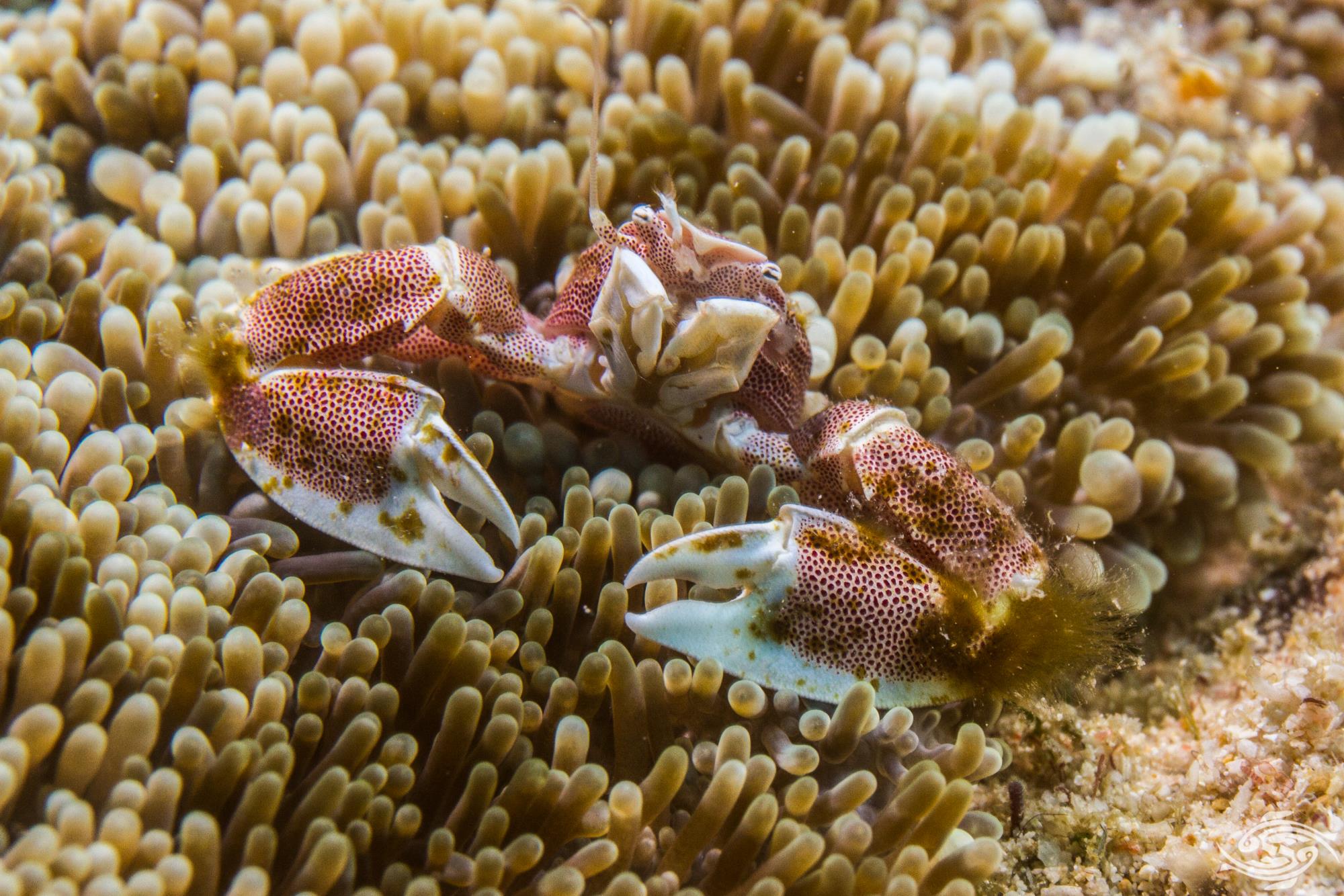 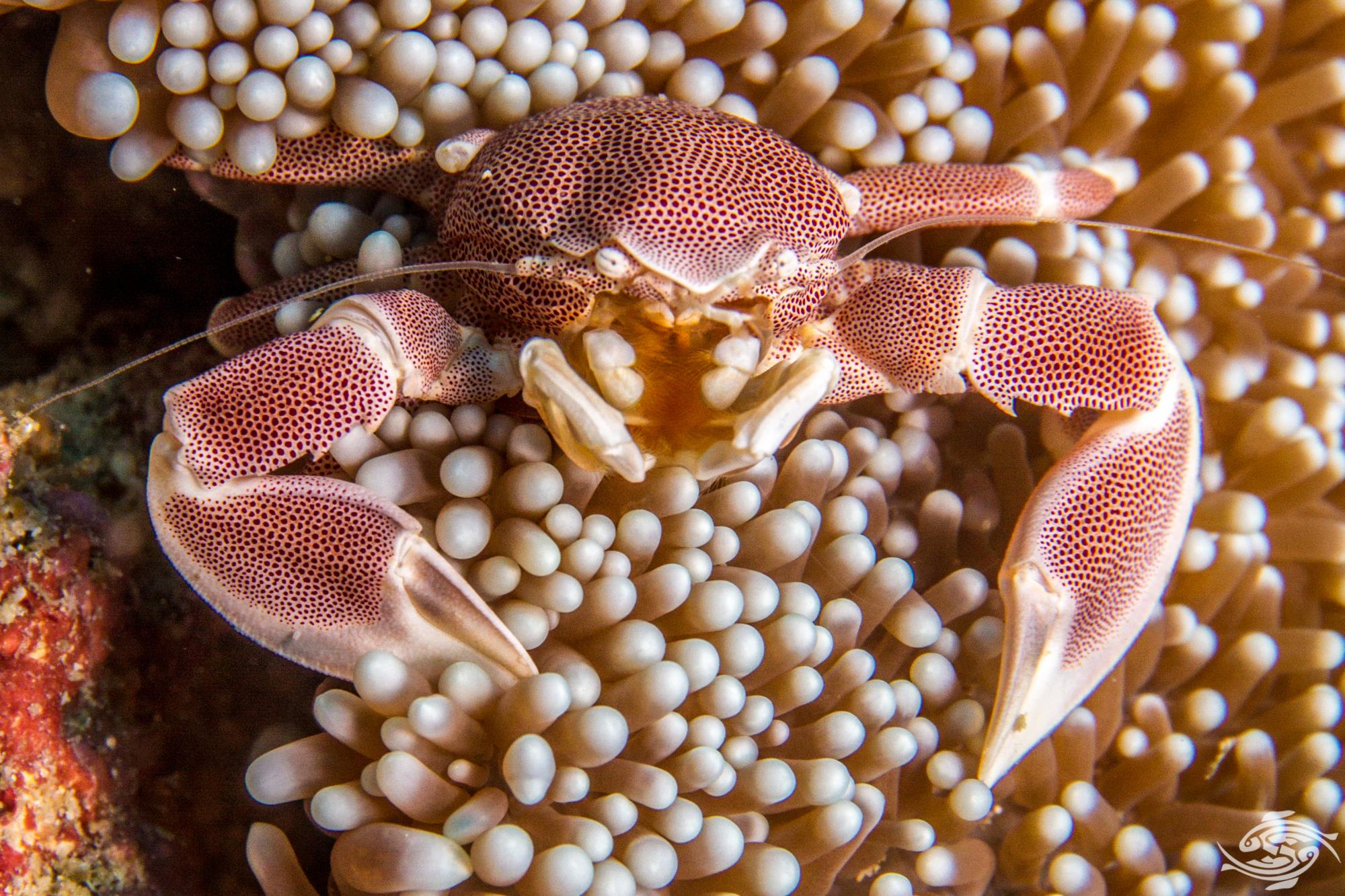 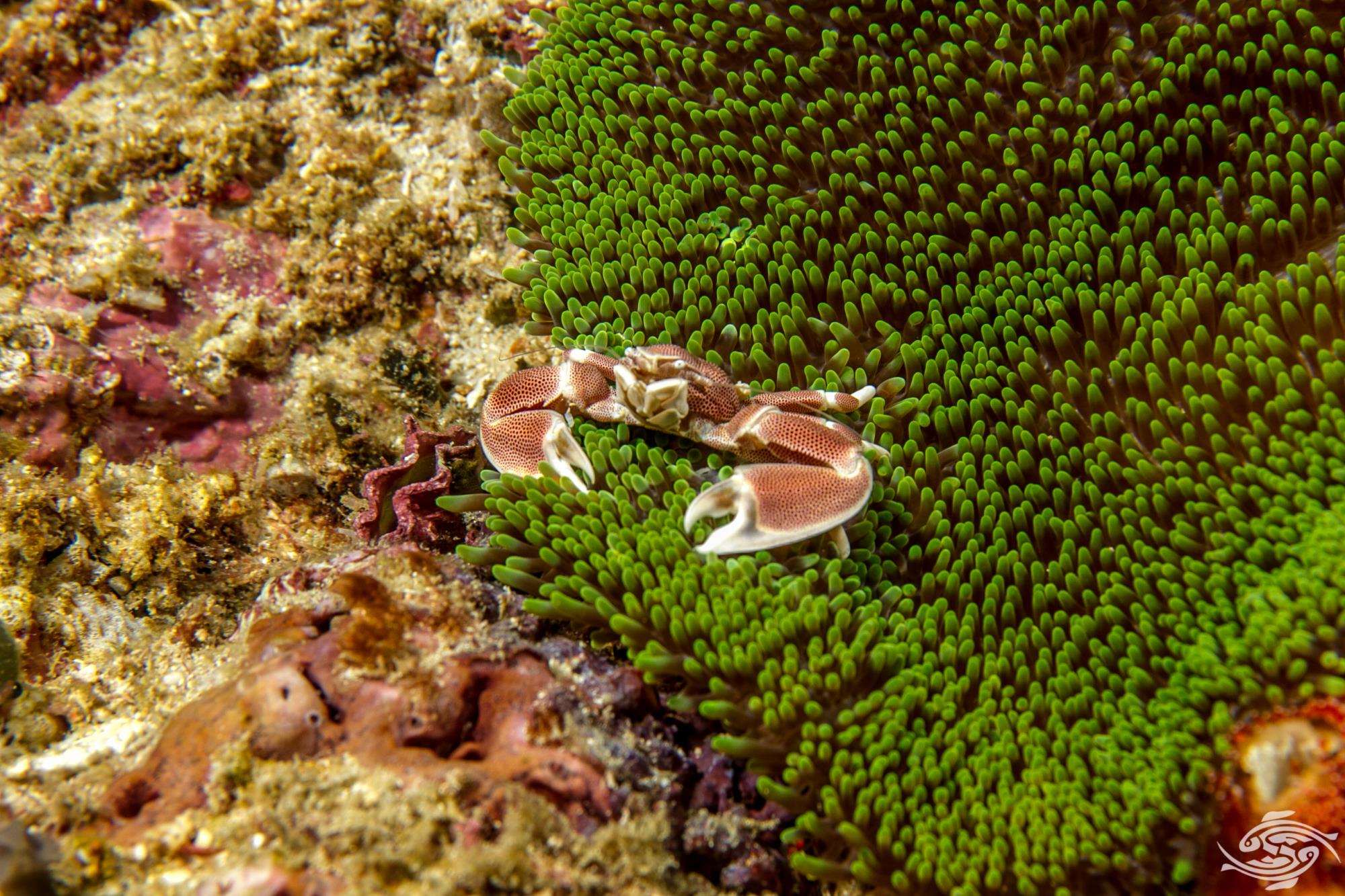 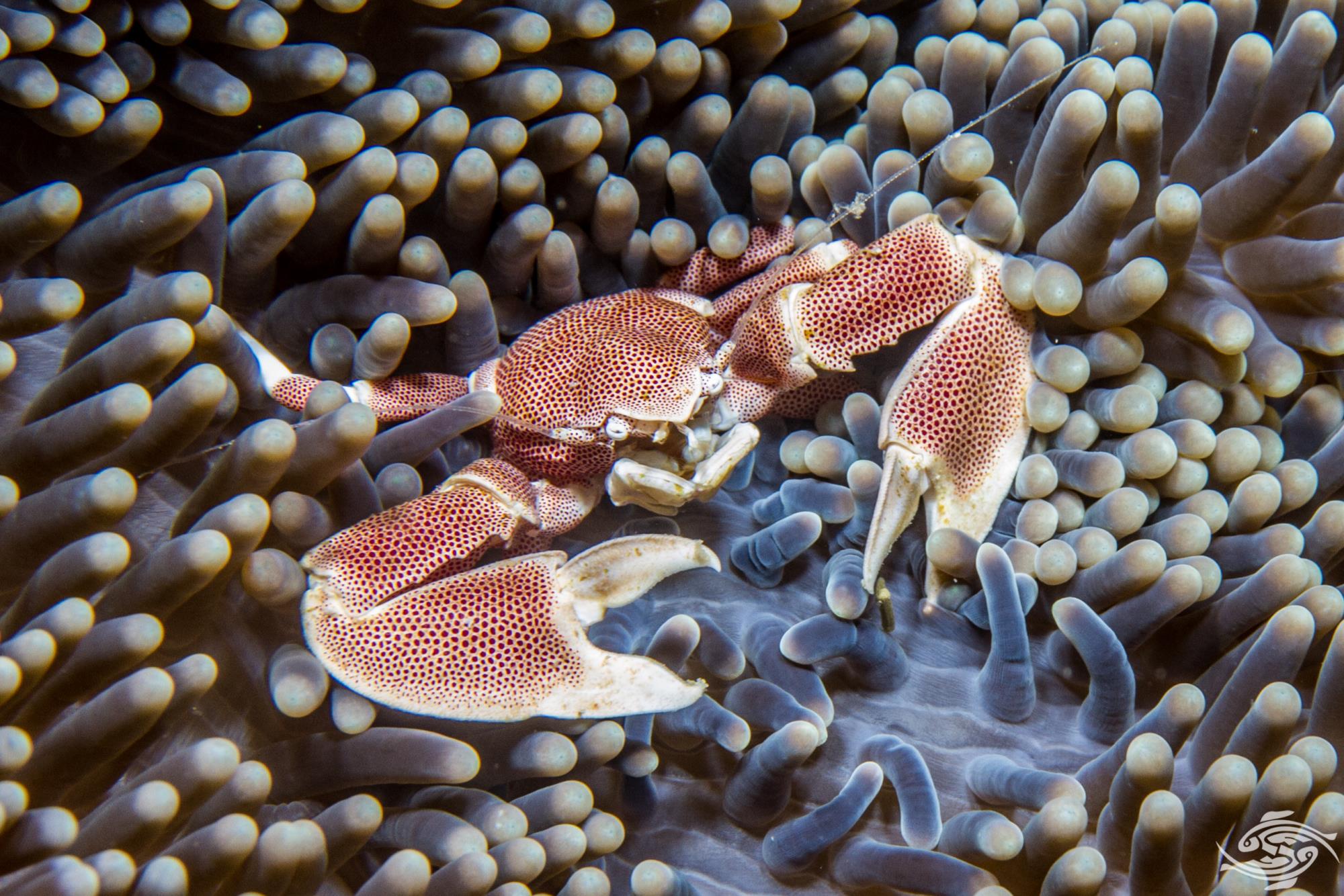