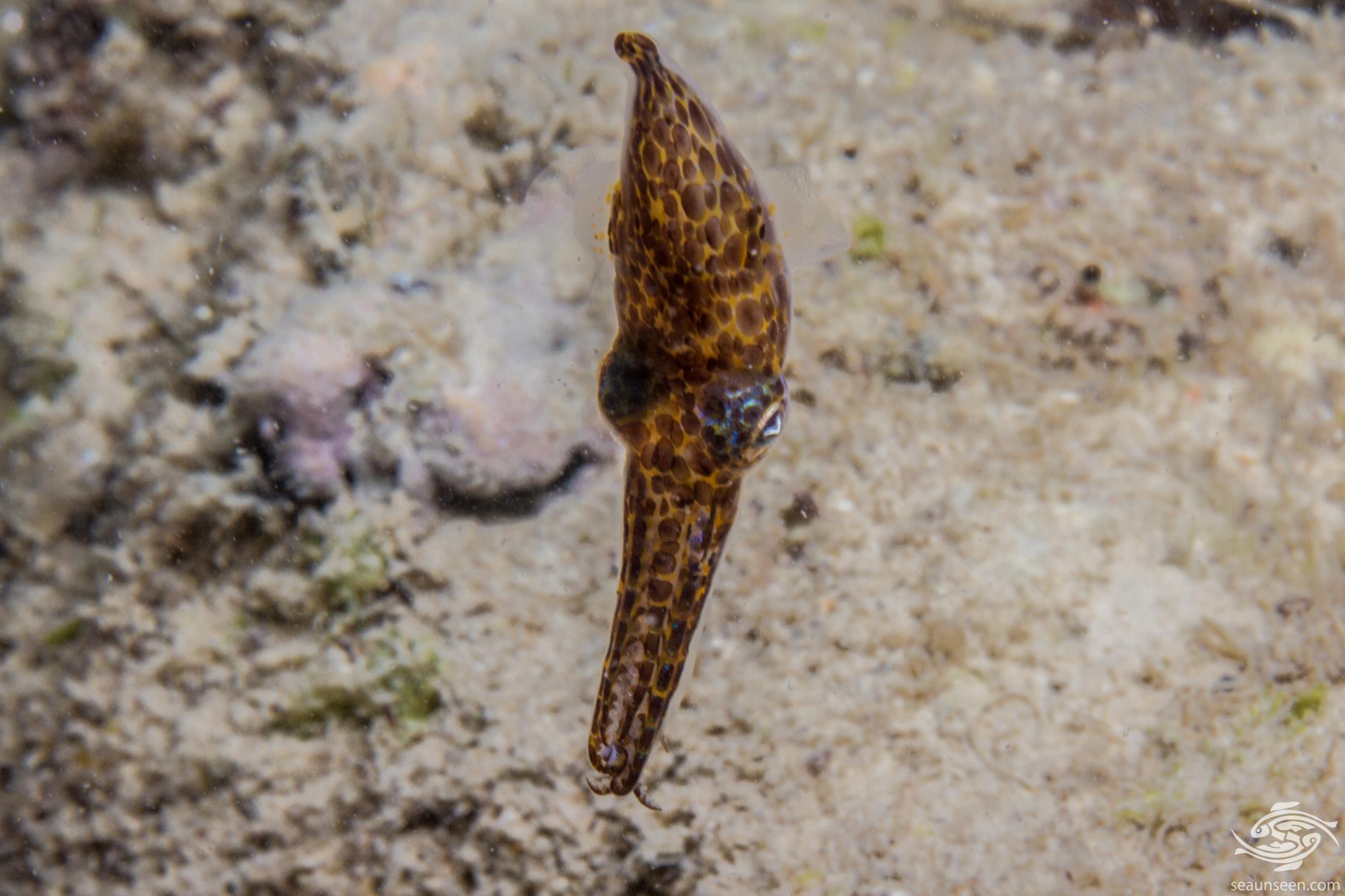 Pygmy squid are technically not squid although they closely resemble them. Instead they fall in the genus Idiosepius. Very little is known of their habits and these found in Tanzania among and alongside the grass beds in the shallows are probably undescribed. 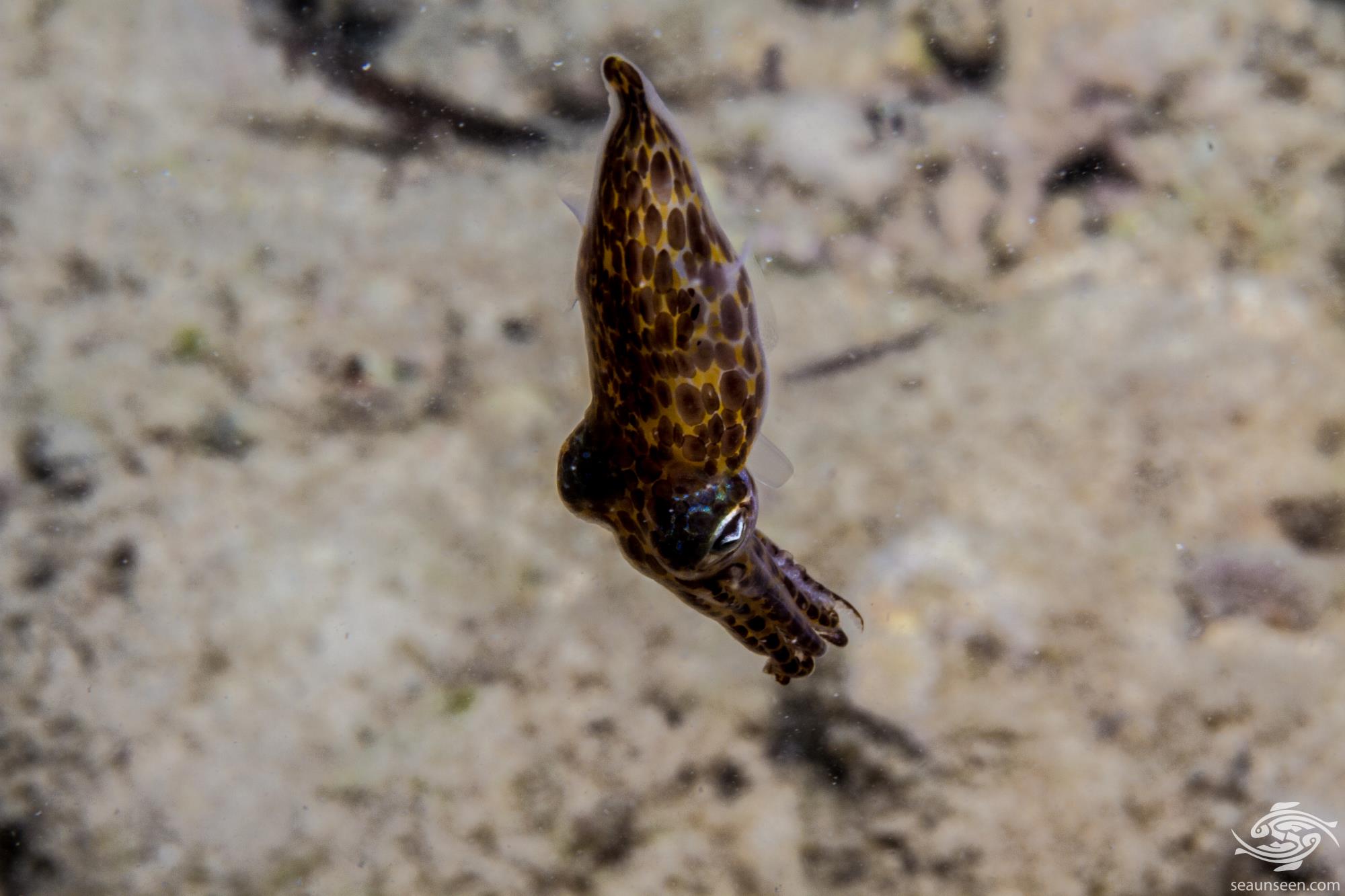 These specimens found in Tanzania differ from the Bobtail Squid we have found in other areas of Tanzania, in that they do not appear to have light emitting organs.  They resemble images of Idiosepius pygmaeus, also known as the two-toned pygmy squid but the head appears to taper more to a point.  Additionally this species is not known from the western Indian Ocean.

They do not appear to resemble Idiosepius minimus either which was described in Mozambique. This species from Tanzania which may be undescribed seem to grow to around 2.5 to 3 cm in length.  If anyone has any ideas on them we would be grateful to hear from you. 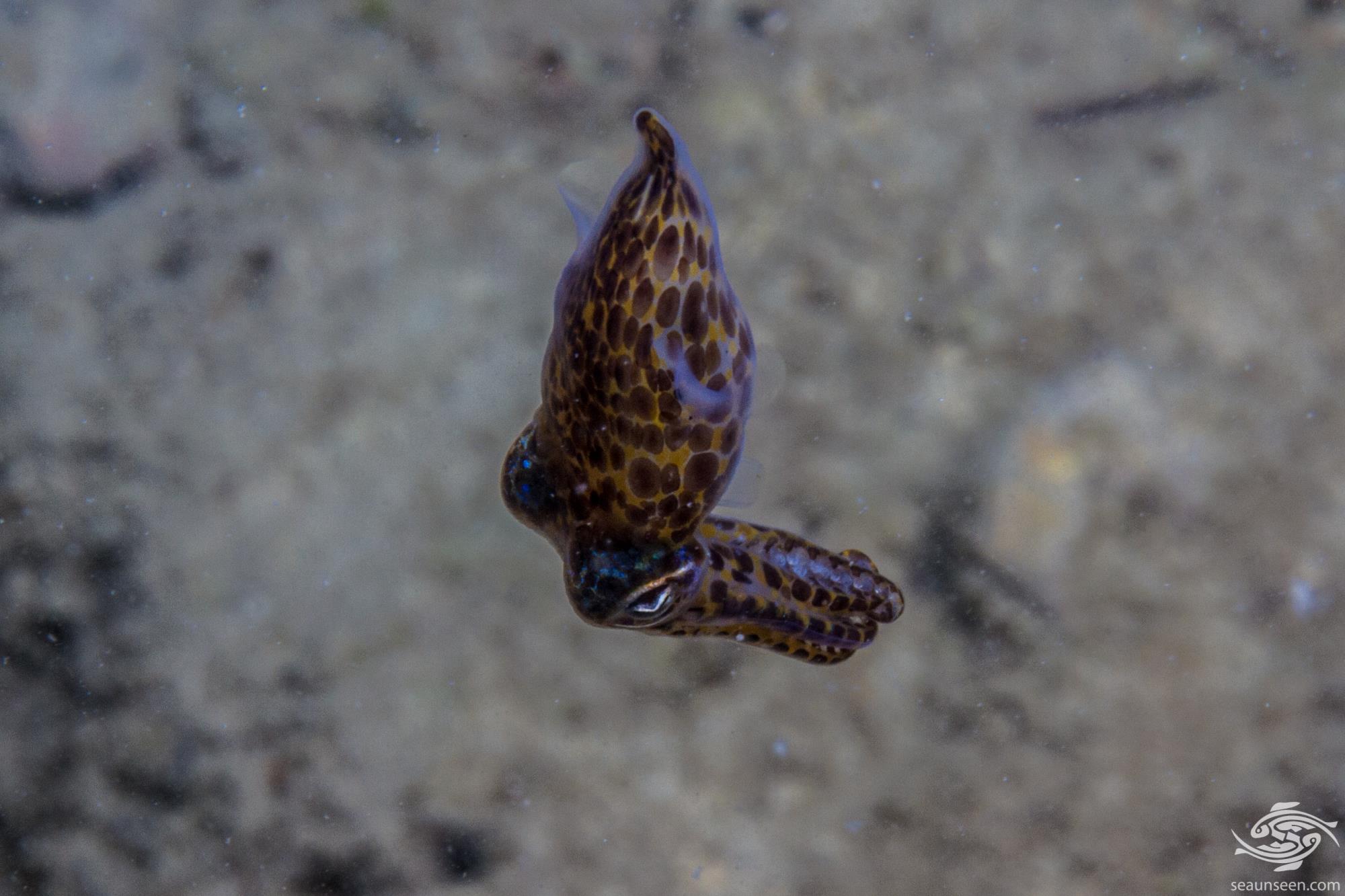 PYGMY SQUID IN THE WILD

We have only found these specimens in the grass beds and over the adjoining rubble at night in Msasani Bay off the premises of the Dar es Salaam Yacht Club.  They appear to be nocturnal as we have only seen them at night.  These specimens were photographed on a low tide in approximately one to two meters of water.

They are quick to dart into hiding in the grass beds and are not easy to photograph. While they are not always active in this area, when they are, they are always swimming in mid water. They are capable of very fast movement when they are frightened and normally dart straight for the grass beds where they hide. Other species in the genus are known to have glue glands which allow them to attach on the sea grass. 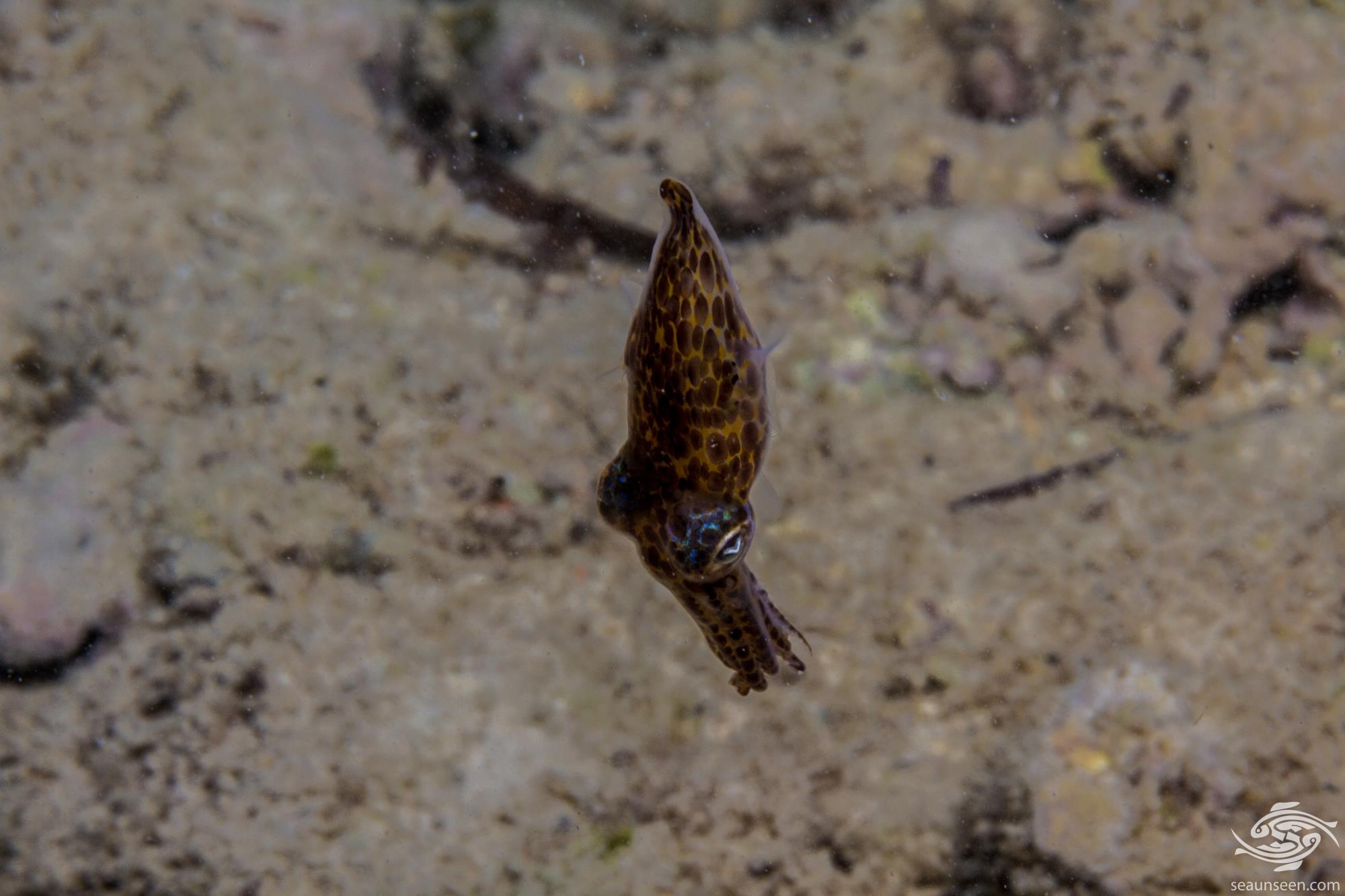 We have only found these squid in one small area near the Dar es Salaam Yacht Club swimming over the grass beds and adjoining rubble at night. We have not found them in similar grass beds in other areas yet. 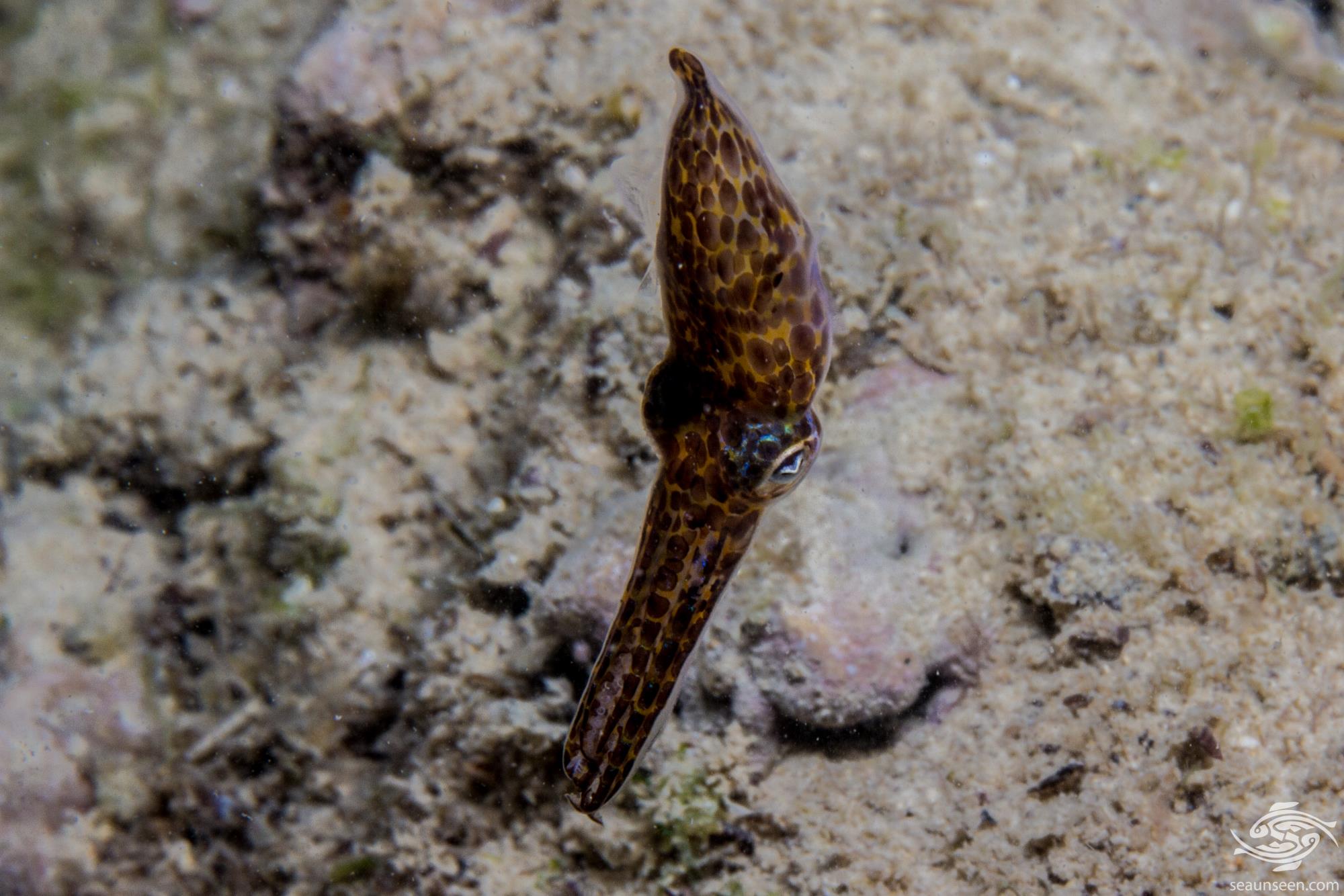 These specimens seem to prey on small organisms swimming above the grass beds but that is slightly speculative. They swim mid water so that is where one assumes their prey is. Other species in the genus are known to prey on small crustaceans.

We have no knowledge of the reproductive habits of these specimens. Other species in the genus are known to lay their eggs on sea grasses and they are thought to have a pelagic stage.