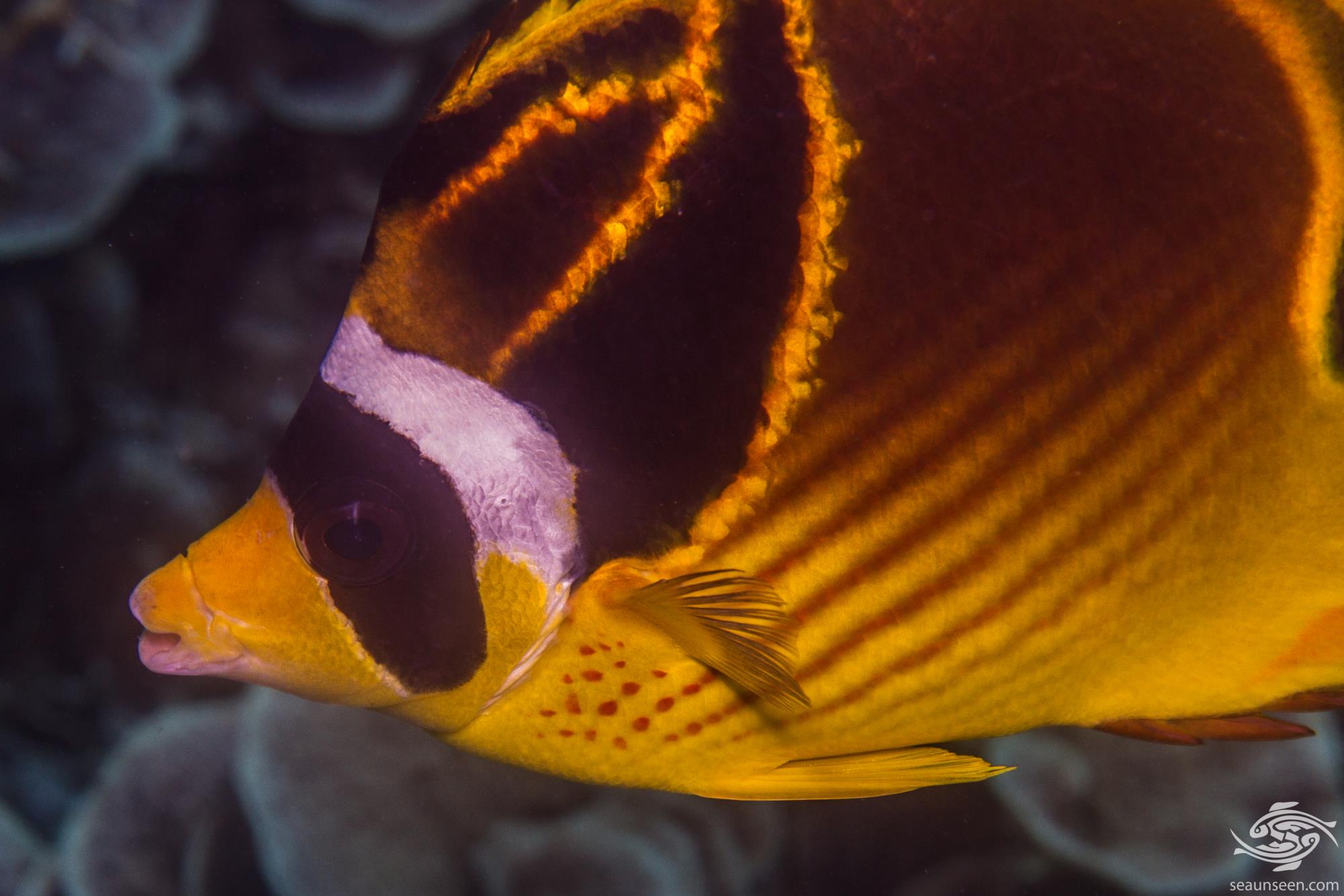 The body of the Raccoon Butterflyfish is a typical butterflyfish shape, laterally compressed and oval with a pointed nose. The main body color is yellow with oblique black lines across the lower rear body, going intoa dark patch that extends upwards. The eyes have a black patch across them , giving them their common name of Racoon. Behind the black patch there is a darker patch intersected by three yellow lines.  The fins dorsal fin is yellow ringed in black and the caudal fin has a black dot on the base. On the rear edge of the caudal fin there is a black line and there is a row of reddish dots just in front of the line.  The pelvic and pectoral fins are bright yellow. They have a pointed mouth with sharp, narrow teeth and grow to up to 20 cm in length. It is impossible to sex them from their looks. 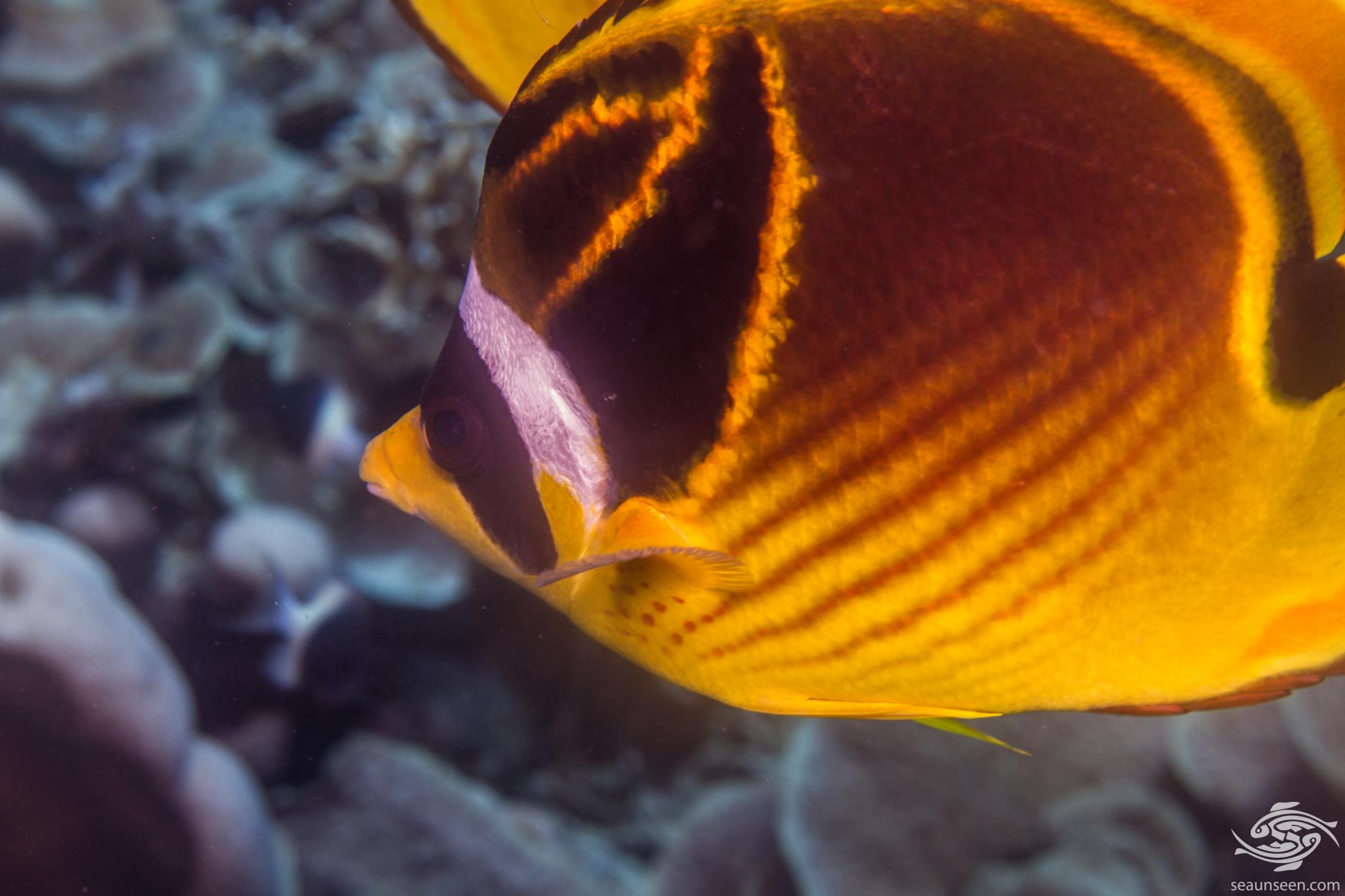 RACCOON BUTTERFLYFISH IN THE WILD

Raccoon butterflyfish are more often than not seen singularly but they are seen in pairs in spring and early summer which is their breeding season. On rare occasions a group of four or five may be seen together and on even more rare occasions larger groups of ten to fifteen fish congregate together. The reason for these congregations is unknown at present.   The adults are usually found from 1 meter downwards to 20 meters. They are mainly seen on shallower reefs in Tanzania but occasionally one will see a large adults on the deeper reefs. They are commonly seen out on night dives as well, particularly in the shallows. Raccoon Butterflyfish darken their colours at night, probably for better camouflage. 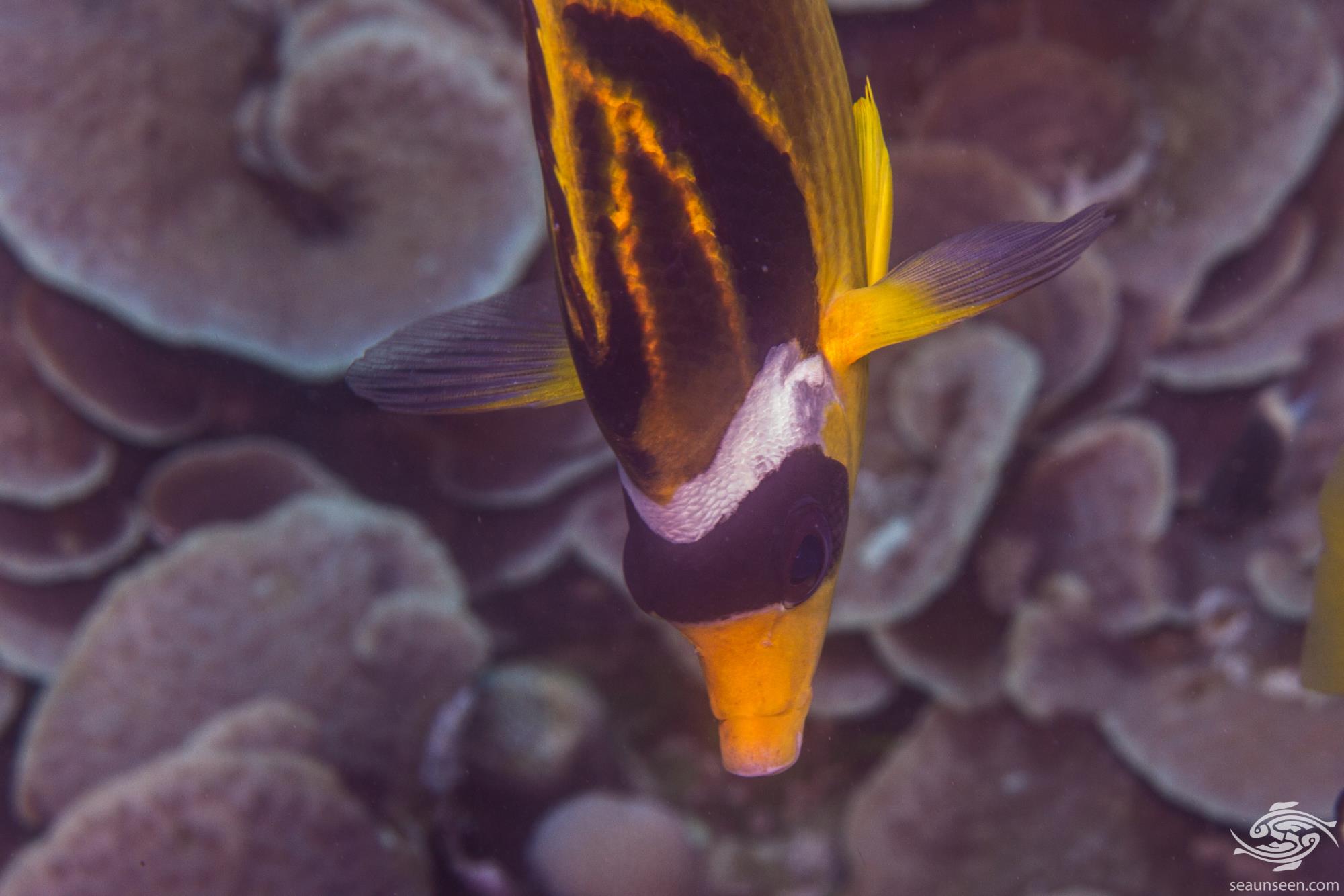 Raccoon butterflyfish are found from South Africa  north to East Africa and across to Southern Japan and down to the Great Barrier Reef in Australia and Lord Howe Island.  In the Red Sea they are replaced by Chaetadon fasciatus which is similar in looks.  They are usually found from 1 to 20 meters in depth in Tanzanian waters but are more common in the shallows. 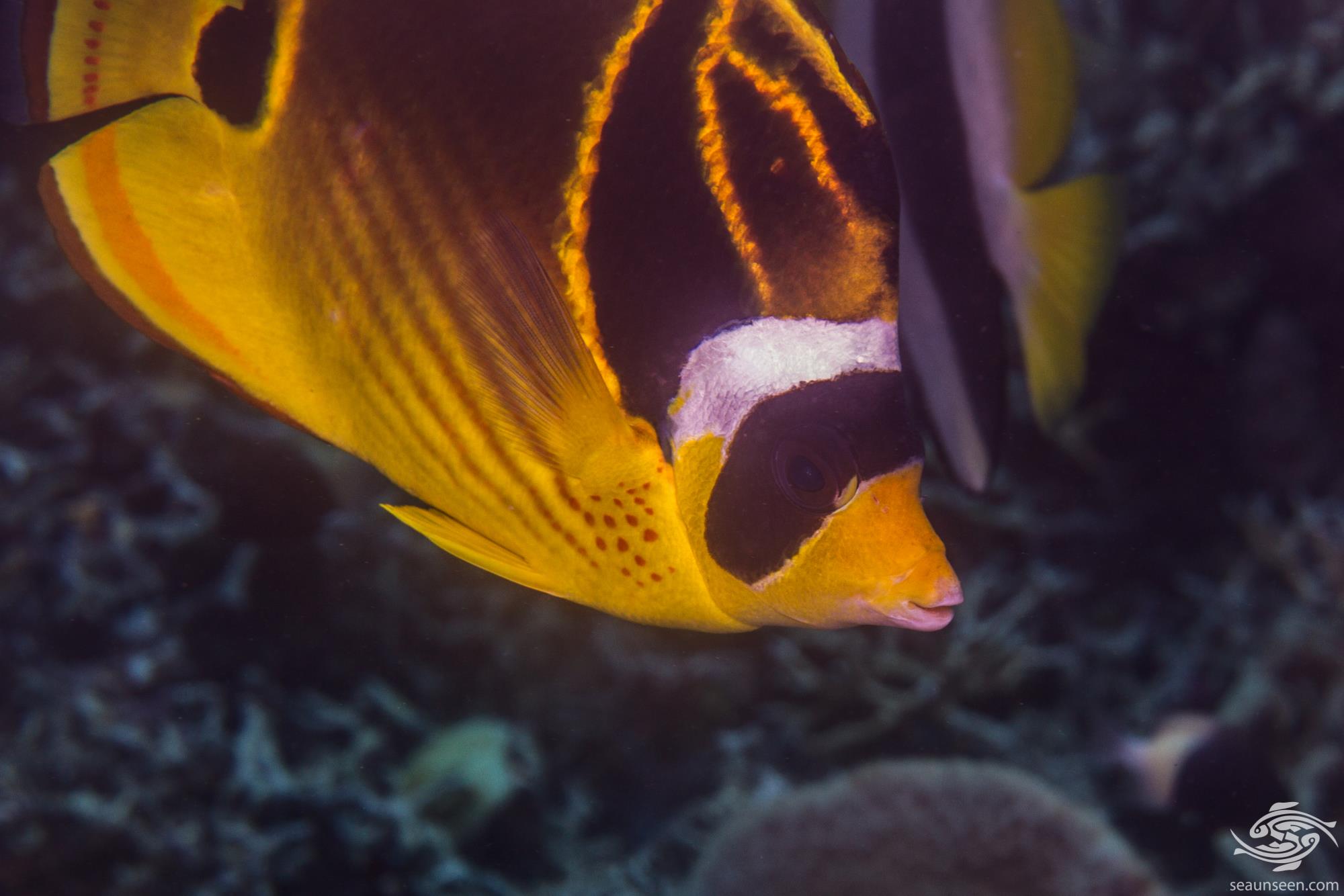 Raccoon butterflyfish are omnivores and feed on a variety of foods ranging from algae, tubeworms, nudibranchs, coral polyps and small benthic crustaceans. One often sees nudibranchs with missing rhinopores and the Raccoon Butterflyfish is a probable culprit. 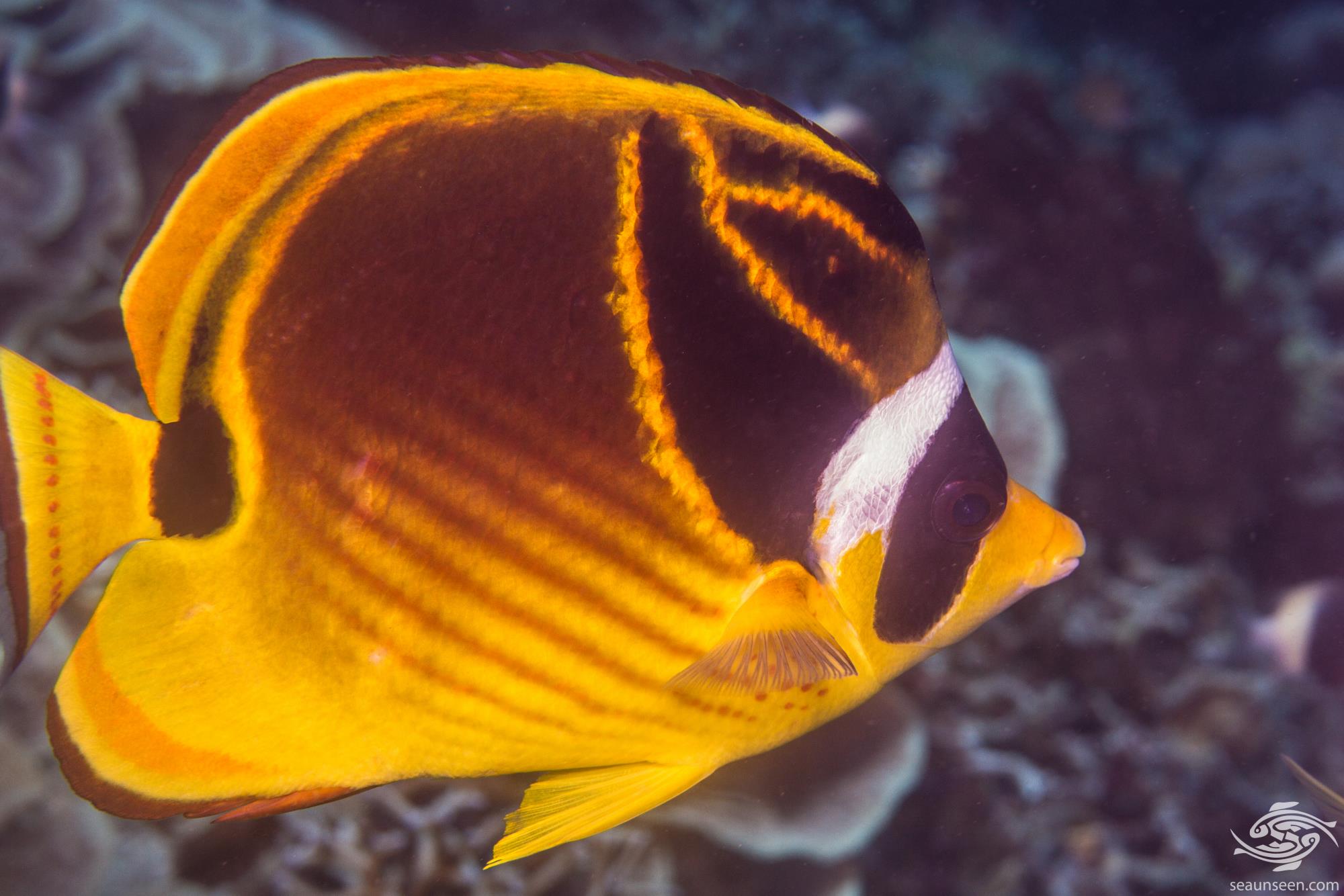 Little is known about the mating habits of the Raccoon Butterflyfish. They are solitary for most of the year but form pairs in spring and early summer when the water temperatures rise to around 28 to 29 C. The female swells with eggs and spawning takes place by scattering into the water table with the male fertilizing the eggs. 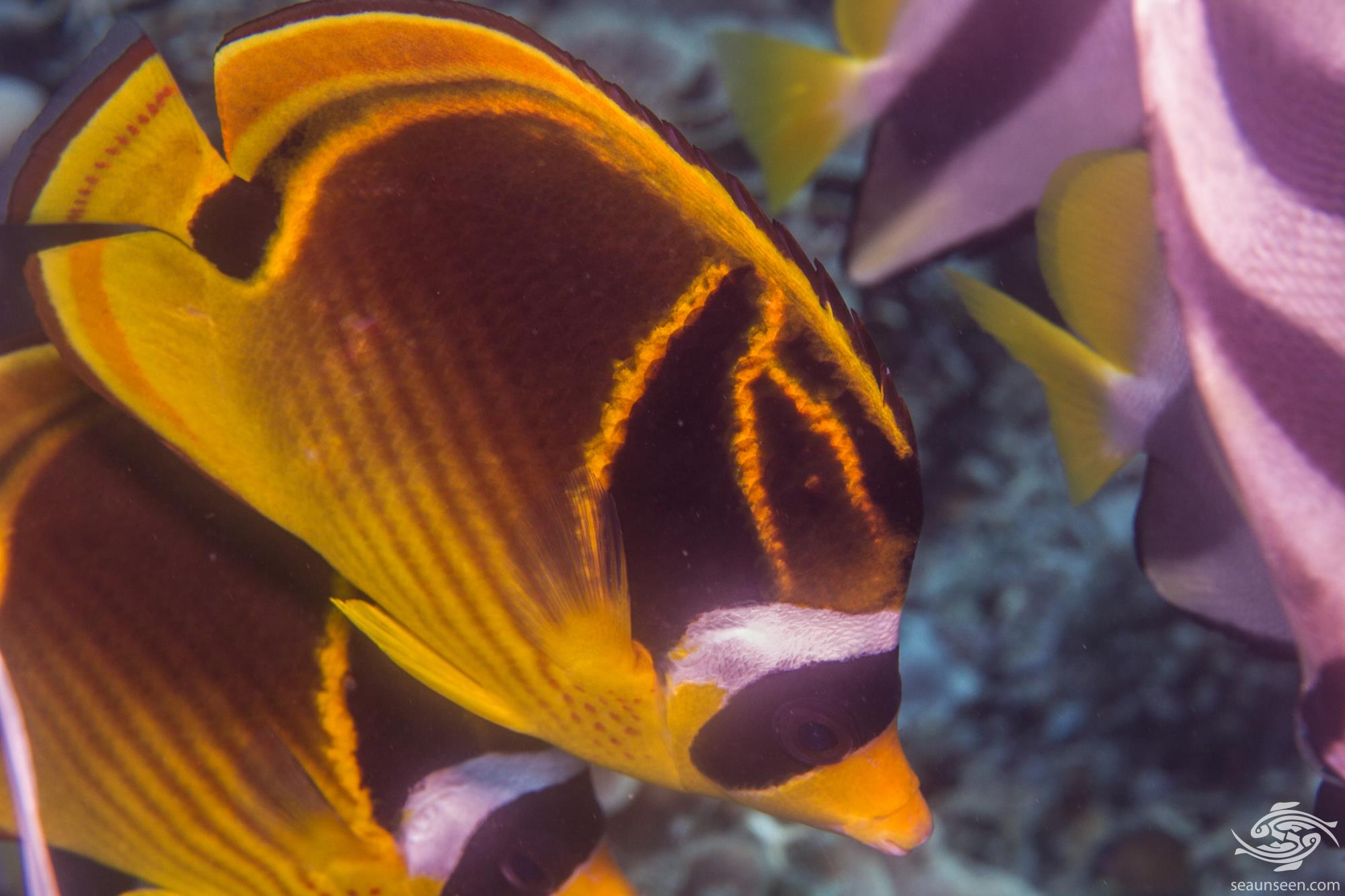 Raccoon butterflyfish are kept in aquariums and are among the tougher of the Butterflyfish. They are often found in rock pools that are subject to high water temperatures on low tide with a sudden drop when the tide changes. They are therefore able to deal with a wide range of temperatures in a short space of time. With their varied diet they are easy to switch over to prepared foods and are relatively easy to keep being more disease resistant than most other Butterflyfish. They are however not reef safe and will  pick on coral polyps and tubeworms. 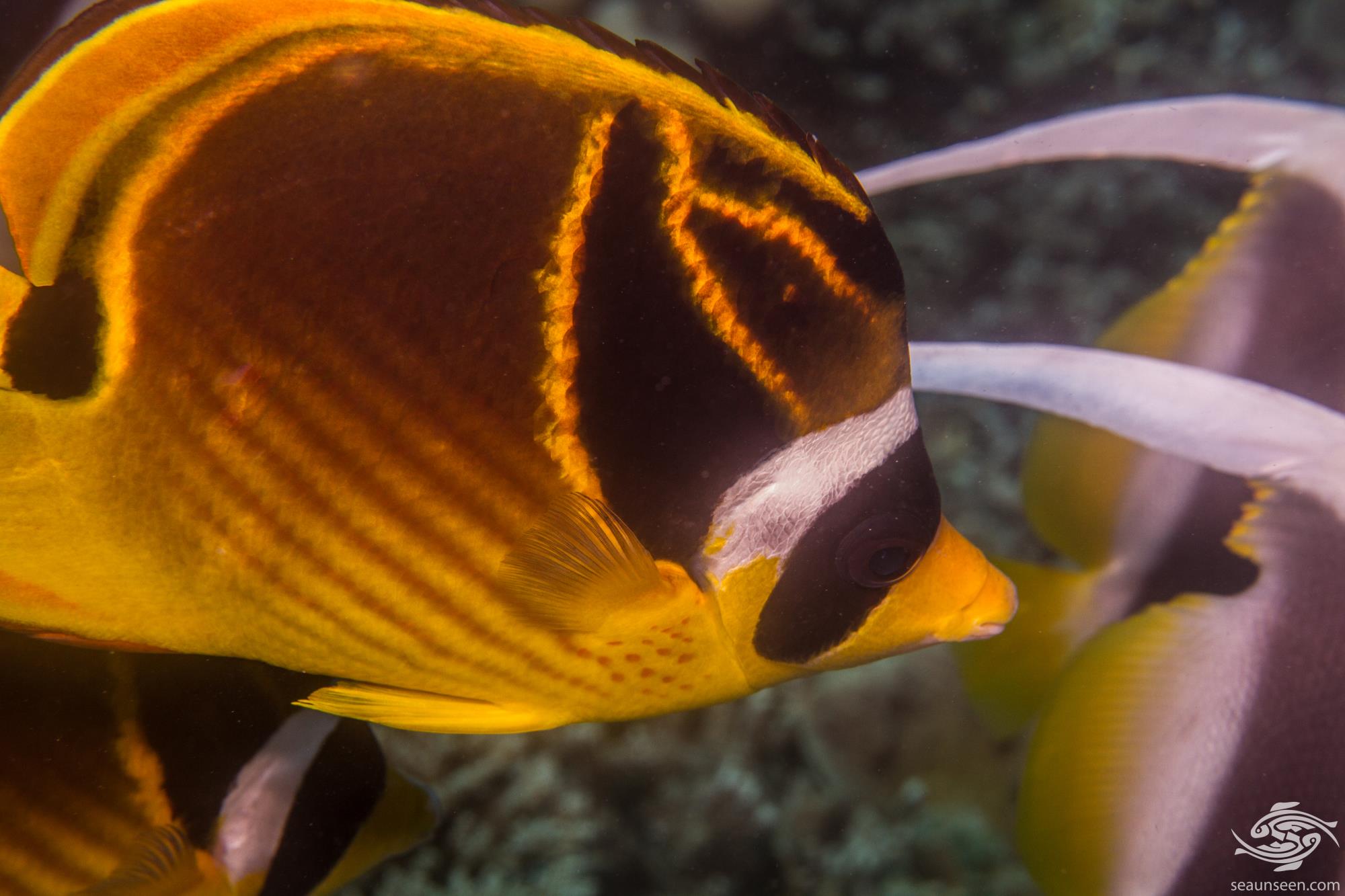