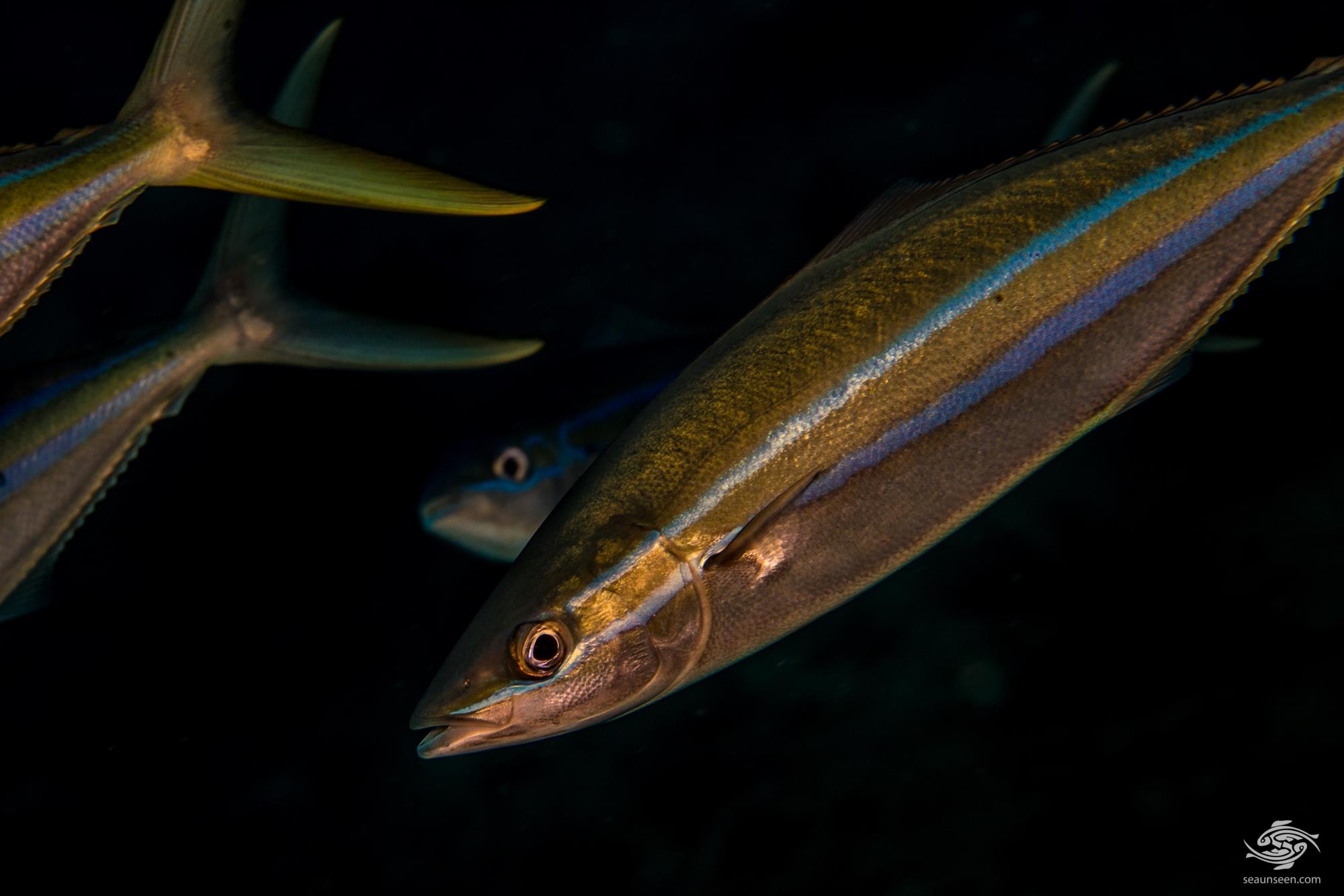 The Rainbow Runner (Elagatis bipinnulata), also known as the Prodigal Son, Spanish jack and Hawaiian salmon. It is a member of the horse mackrel or jack family. They are fairly common on the Tanzanian coast. They are in the Carangidae family and are the only species in the Elagatis Genus.

Rainbow Runner are very distinctive looking fish, unusually for fishes in the Carangidae family, the body is cylindrical in shape with a small sharp head and a large forked caudal fin. The body is an olive green color that is darkest on the dorsal area and fades down towards the lower body which is more silvery in color. There are two light blue lines running across the body.  Sometimes in poor visibility the resemble a Cobia but the bright blue stripes make them quite distinctive. They grow up to 120 centimeters in length and weigh up to 15 kilograms although the world record is 17.05 kg .  More commonly they are in the 60 cm range. 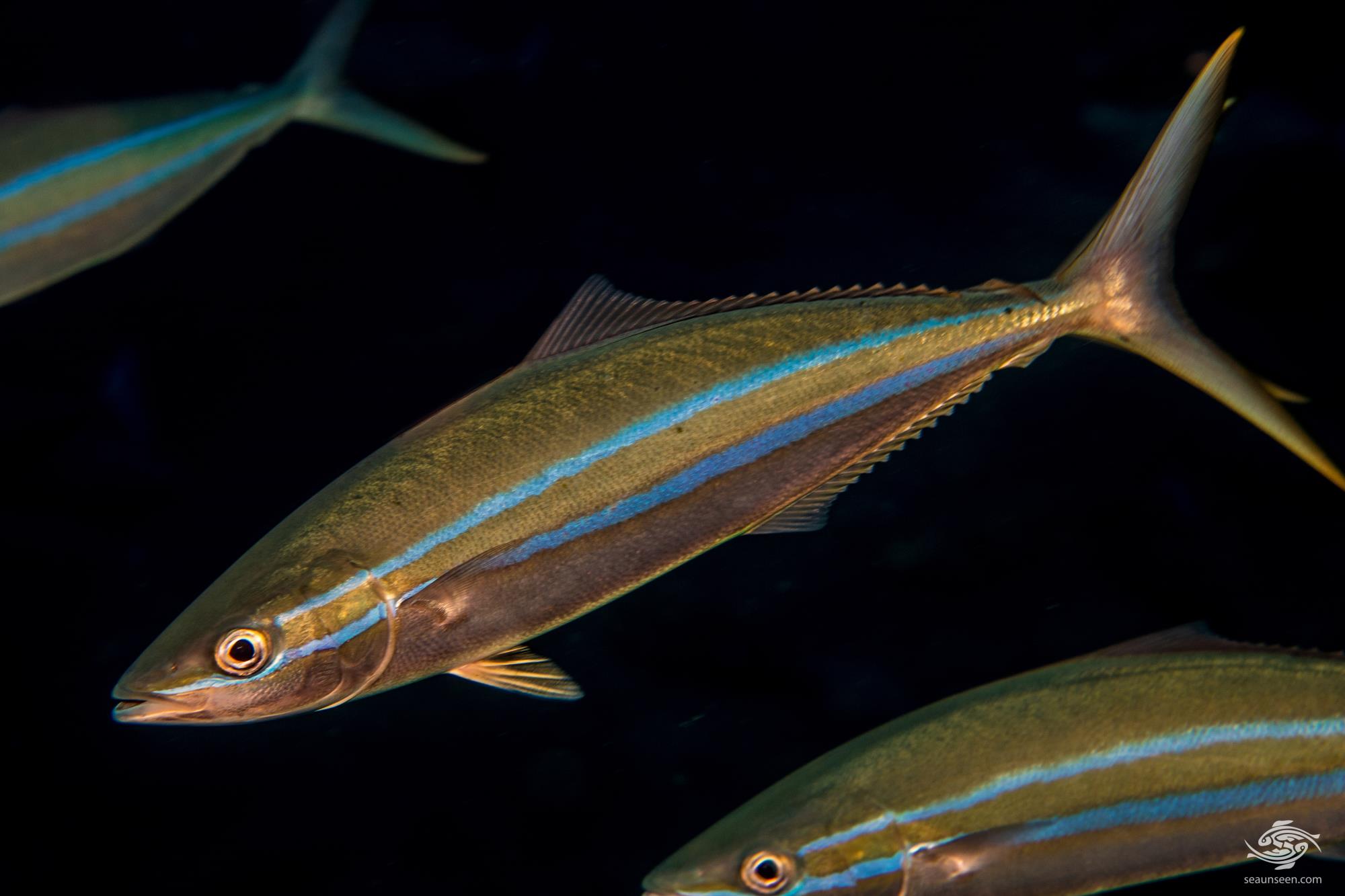 RAINBOW RUNNER IN THE WILD

Rainbow Runner are normally found in shoals and are more of a deep water fish than a reef fish. They do sometimes come into the reef but will usually stick fairly close to a deep drop off and open water. They are curious fish and will usually swim up to and around a scuba diver. After a few circuits they move off.  They are powerful fish capable of swimming at a high speed. 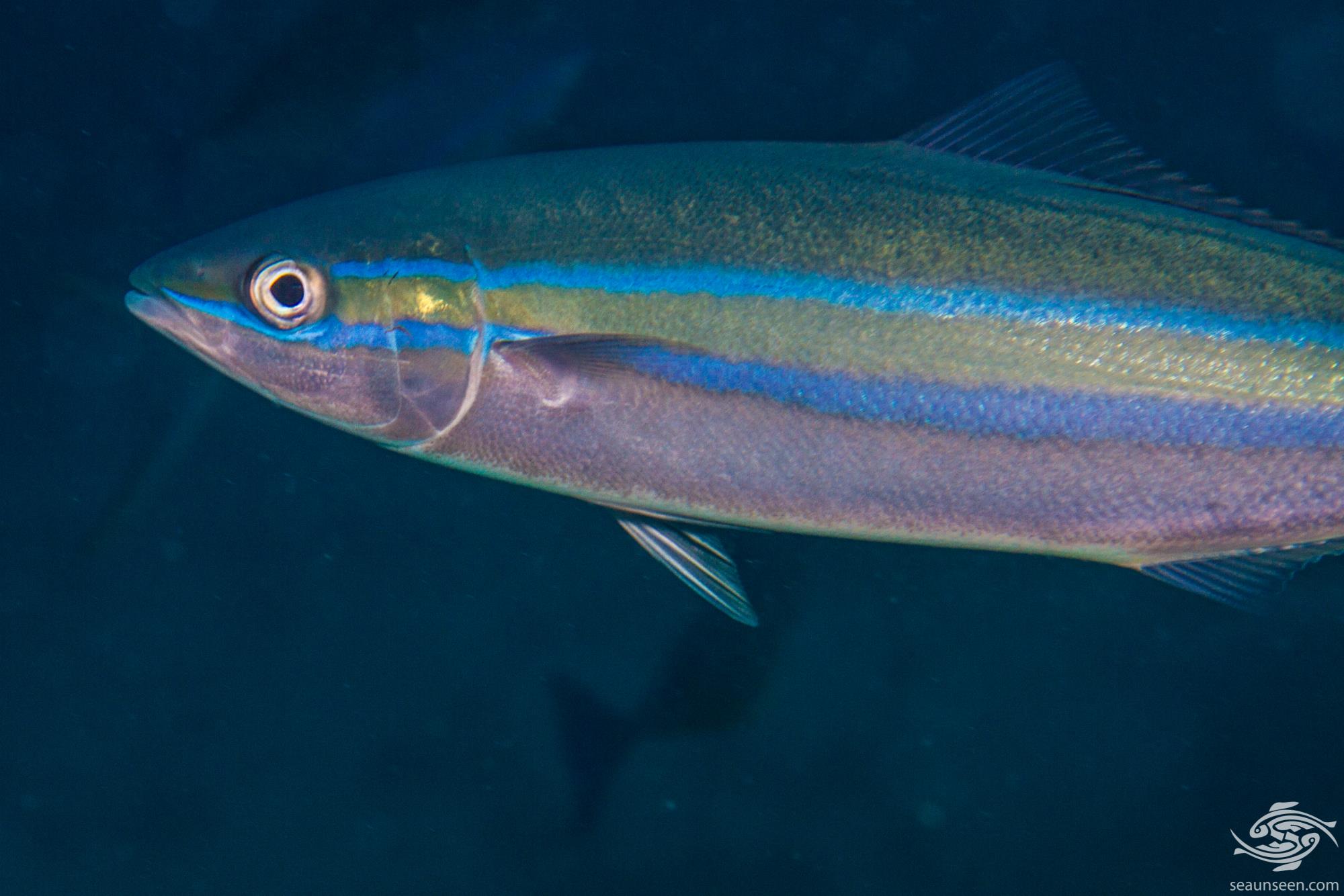 The Rainbow Runner is found across the tropical areas of the globe and in some warmer sub tropical areas.  Primarily an open water fish they do on occasion come onto the reef. The fish inhabits areas with sand or rubble adjacent to coral reefs at depths from 10 to 160 meters. 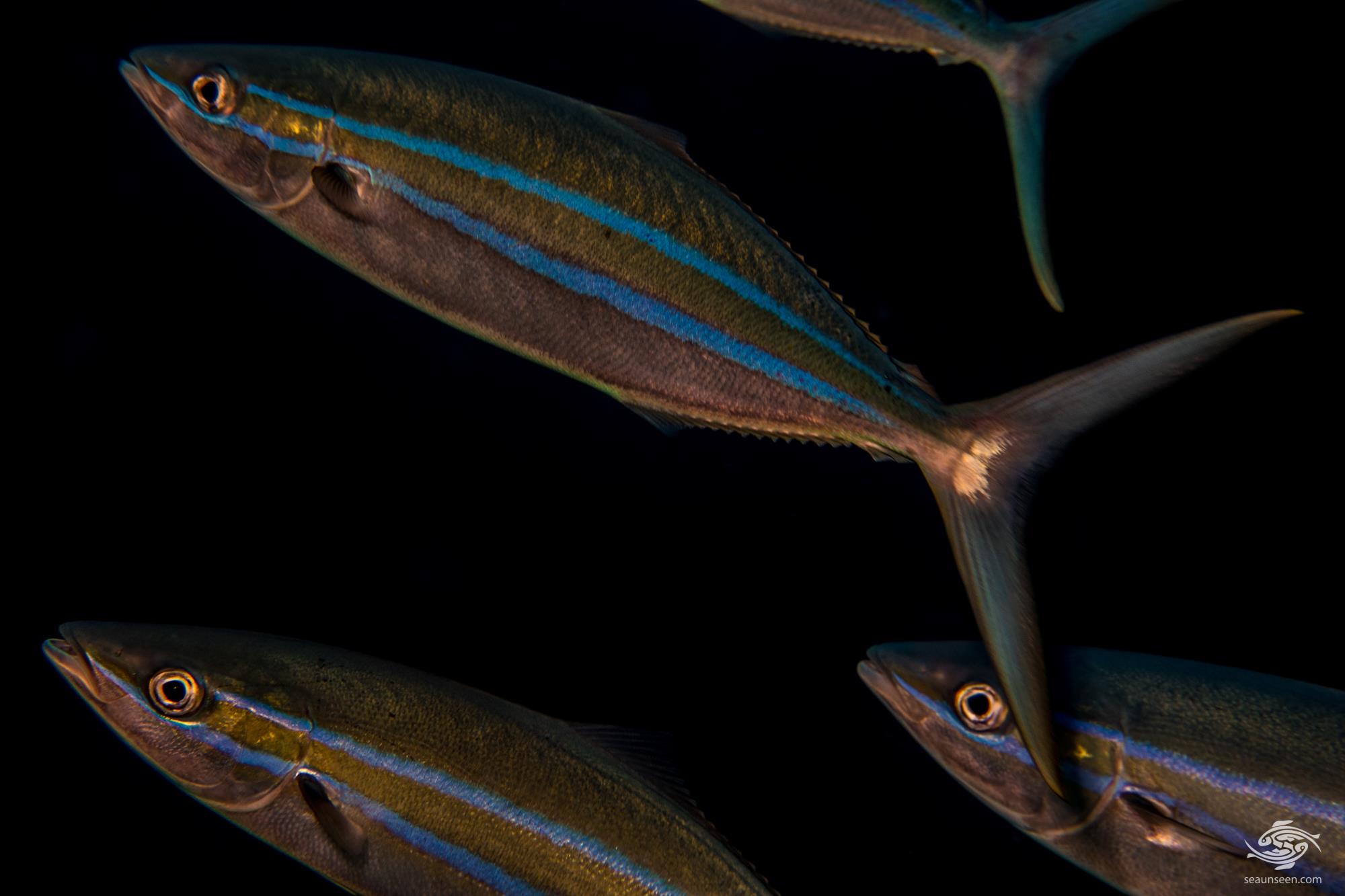 The Rainbow Runner feeds on a variety of small fishes, cephalopods and crustaceans. They are adept at using their speed to take prey out the water table. This makes them susceptible to being caught on hook and line. 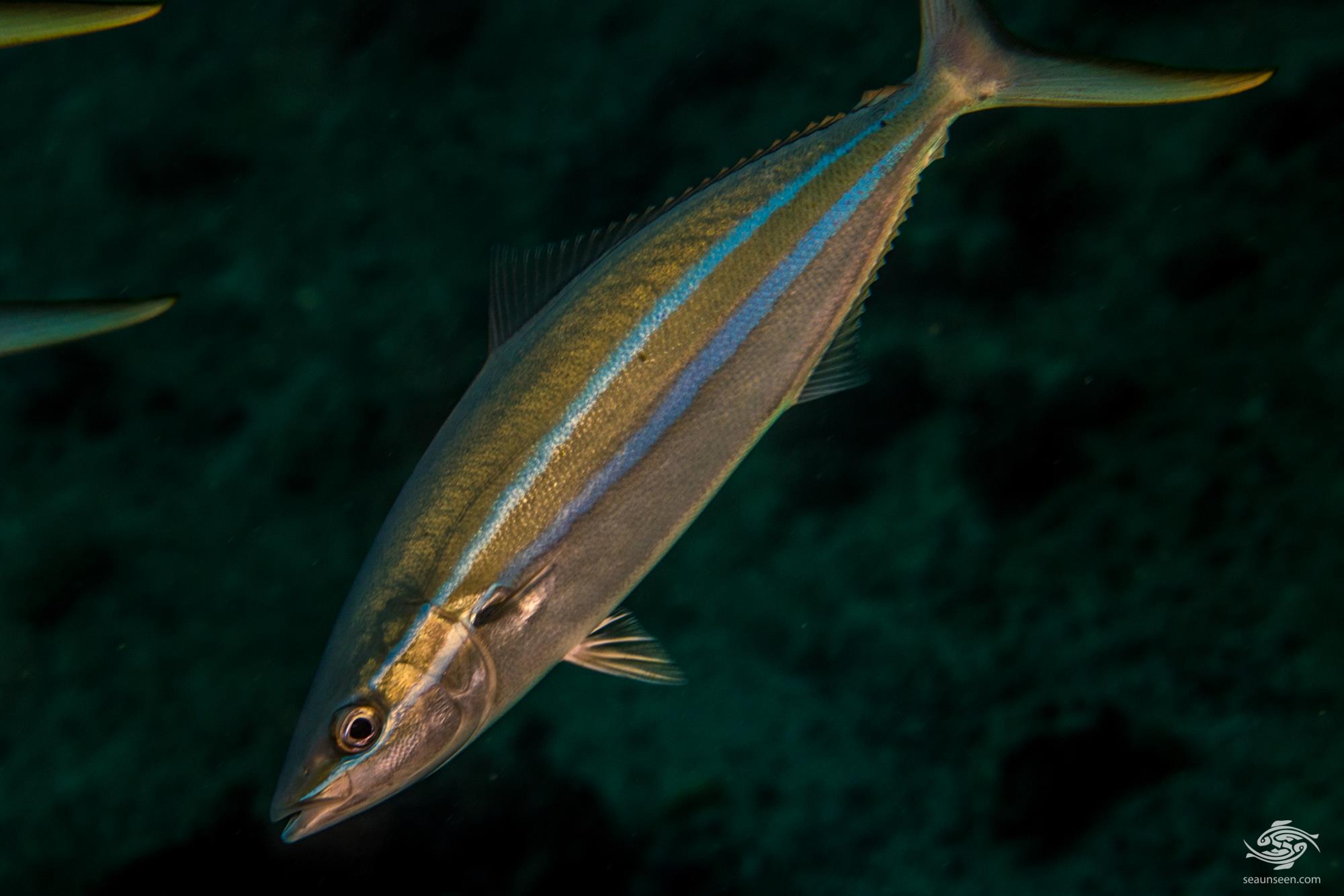 The Rainbow Runner have been observed pair spawning, releasing eggs into the water table which are then fertilised. The eggs remain pelagic until hatching and the larvae are pelagic. Spawning takes place in the warmer months of whichever location they are in and in waters that remain over 27 C they spawn throughout the year. 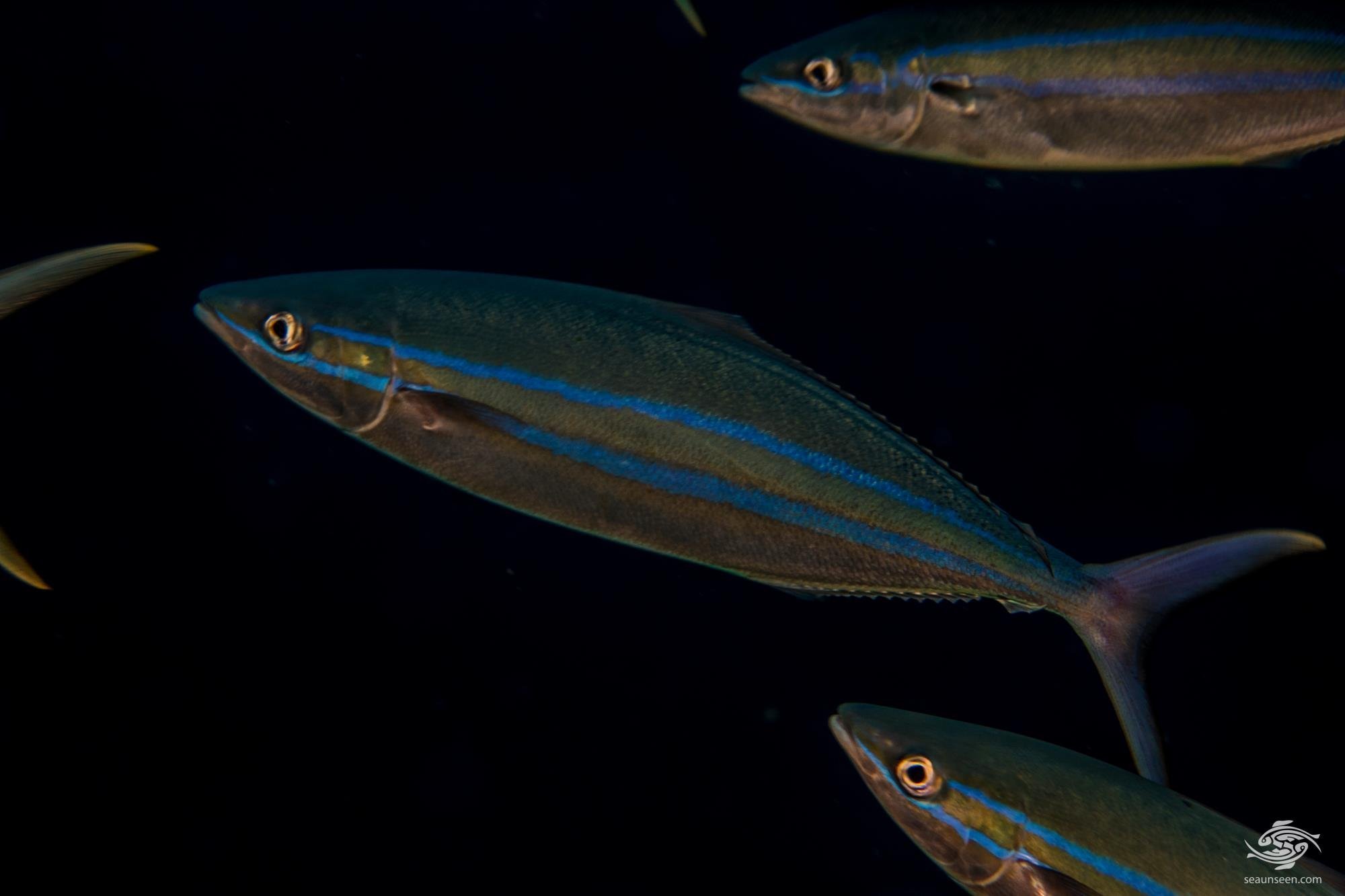 The Rainbow Runner is exploited commercially often as by catch when netting Tuna or Herring. Because they are not well known they do not usually fetch a premium price but they are said to be excellent eating . They are also fished as a game fish using lures and bait and put up a strong fight on light tackle.