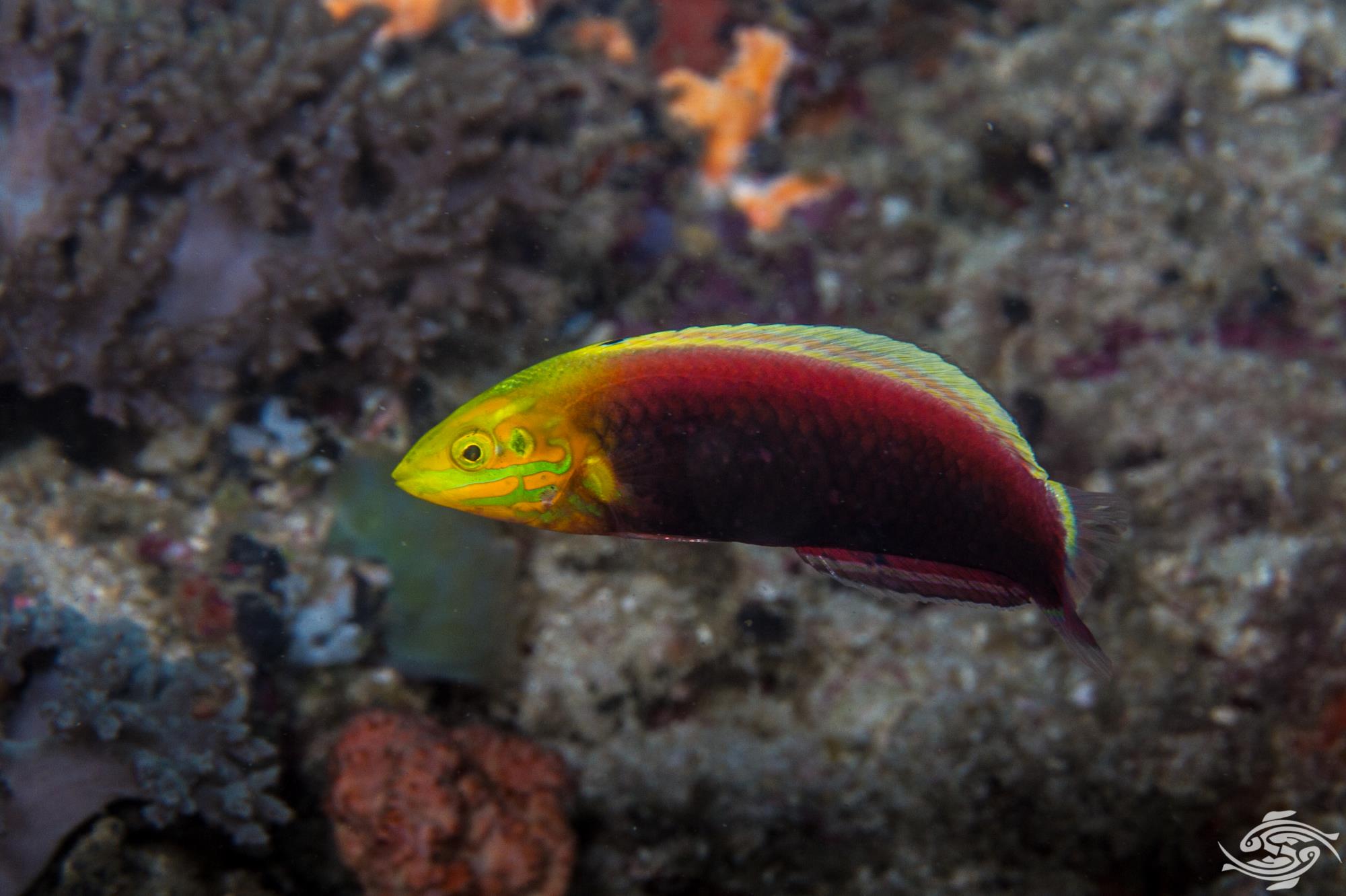 The Rainbow Wrasse (Halichoeres iridis) is also known as the Radiant Wrasse. They are very common in certain areas of the Tanzanian coast. 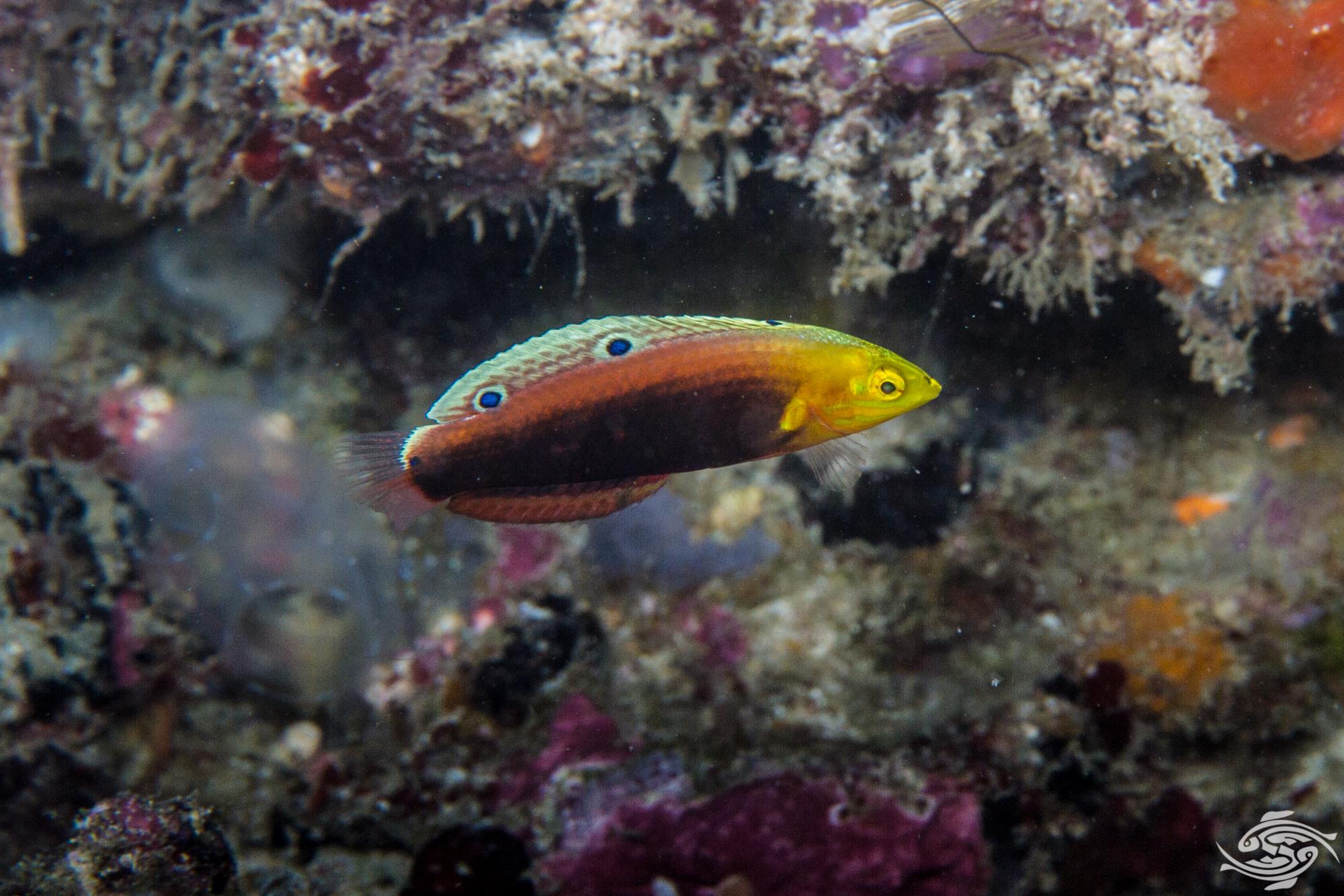 In Tanzanian waters there is little variation in coloration between the juveniles and the adults.  The juveniles pictured above have a yellow head fading into a yellow green color. The lower third of the body is a dark burgundy color and the upper third transitions into a lighter red color with a white dorsal fin. A juvenile some 1.5 cm long is pictured below. 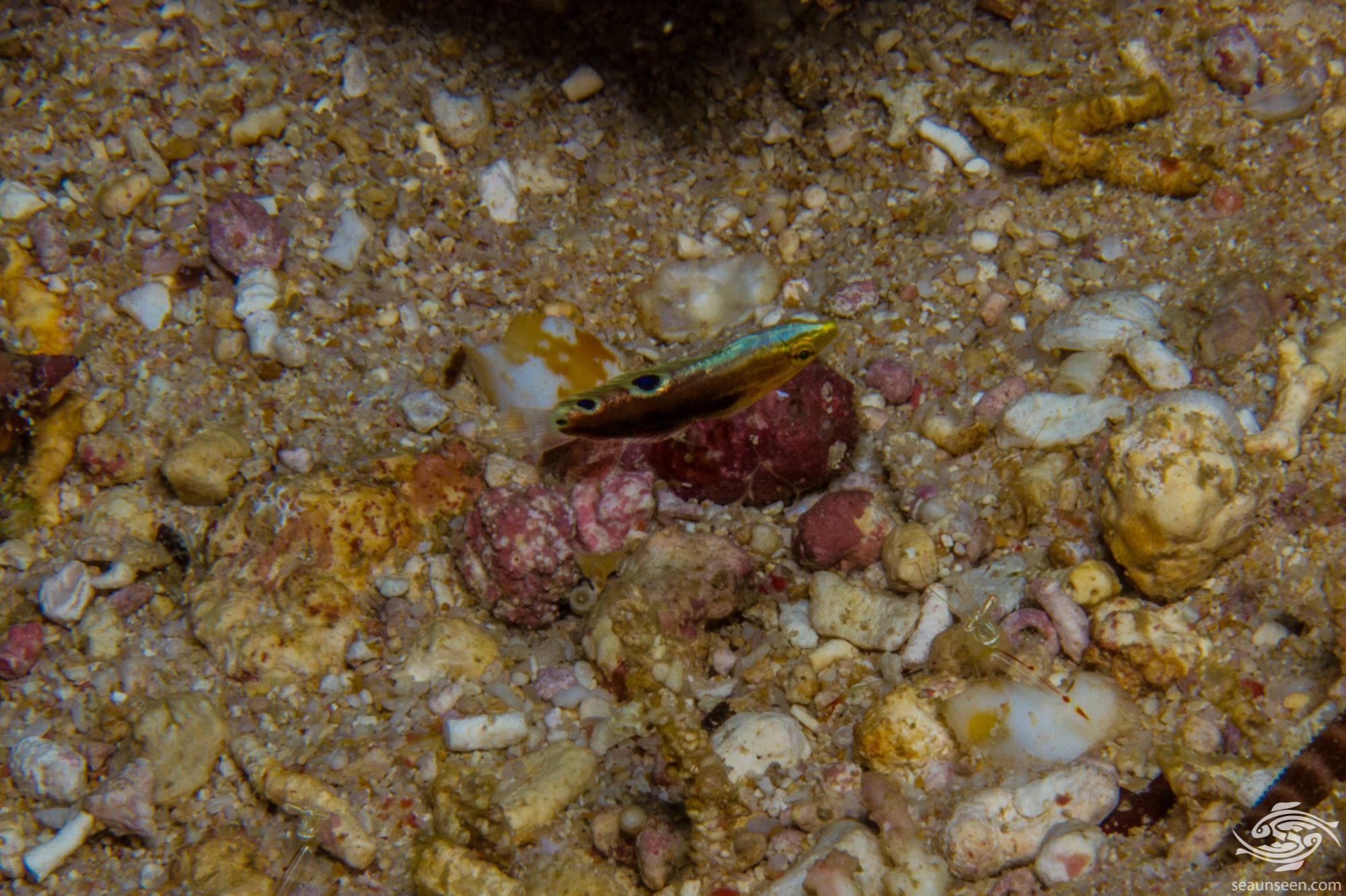 Behind the eye a slightly darker spot develops and the rear of the head goes a more orange colour. Some specimens grow larger than the others and these are assumed to be the males.  These grow up to a maximum of 12 cm. We have never seen a larger specimen. 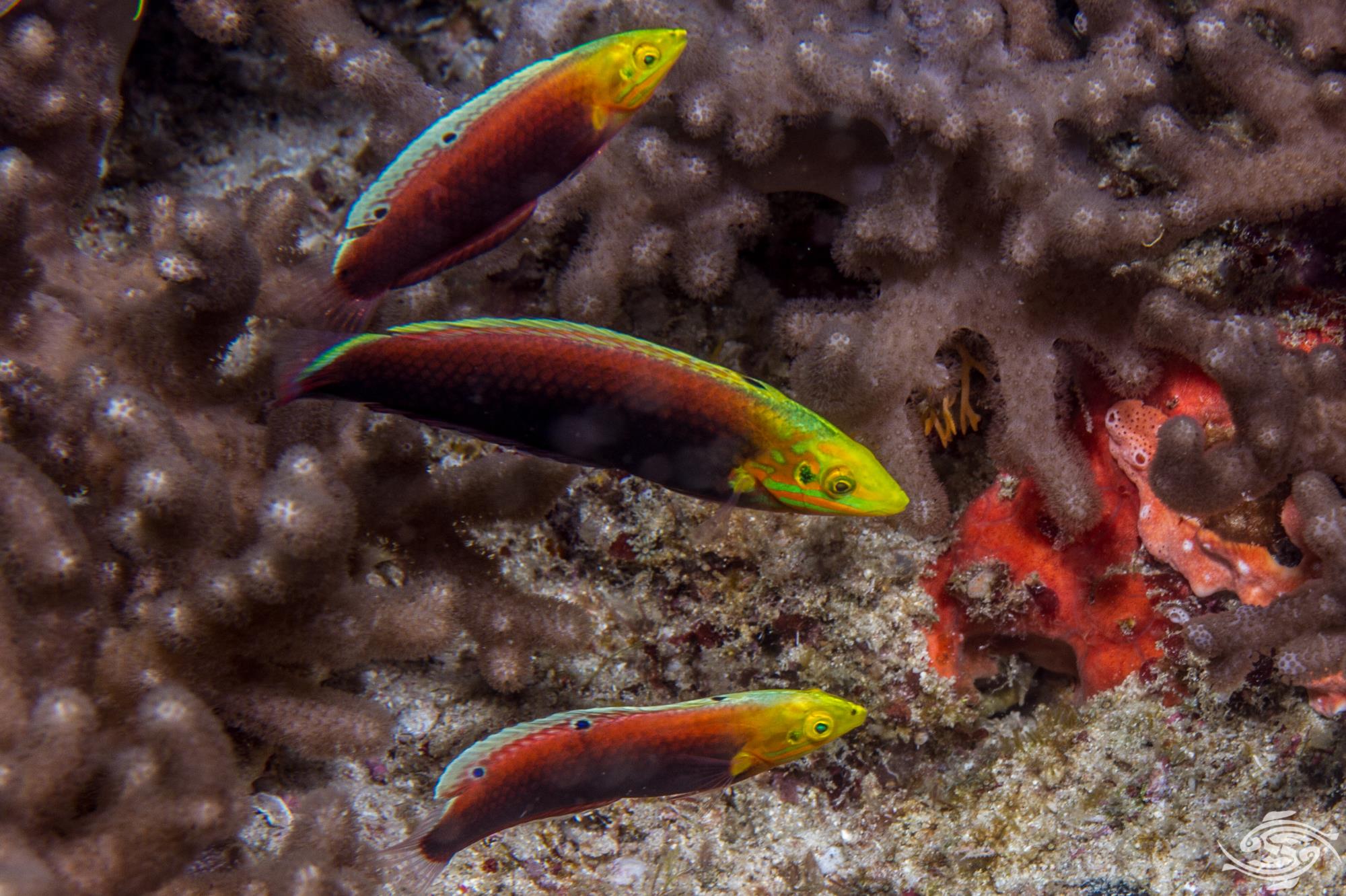 RAINBOW WRASSE IN THE WILD

The Rainbow Wrasse  is very common on the tops of the seaward reefs in Tanzania from depths of 12 meters down to about 20 meters. They are more common in areas of soft coral and rubble but are found on rubble and hard coral.  They are almost always in mixed groups of adults and juveniles and it is uncommon to see one on its own.

If not with others of their species they are with the Longbarbel Goatfish or the Divided Leopard Wrasse and occasionally with other wrasse. Occasionally one will see a larger specimen swimming from group to group. It is assumed but not certain that the males have a large number of females and juveniles in their territory. While some other wrasses engage in size related posturing and active chasing of smaller specimens, we have never witnessed any aggressive behavior with these fish. 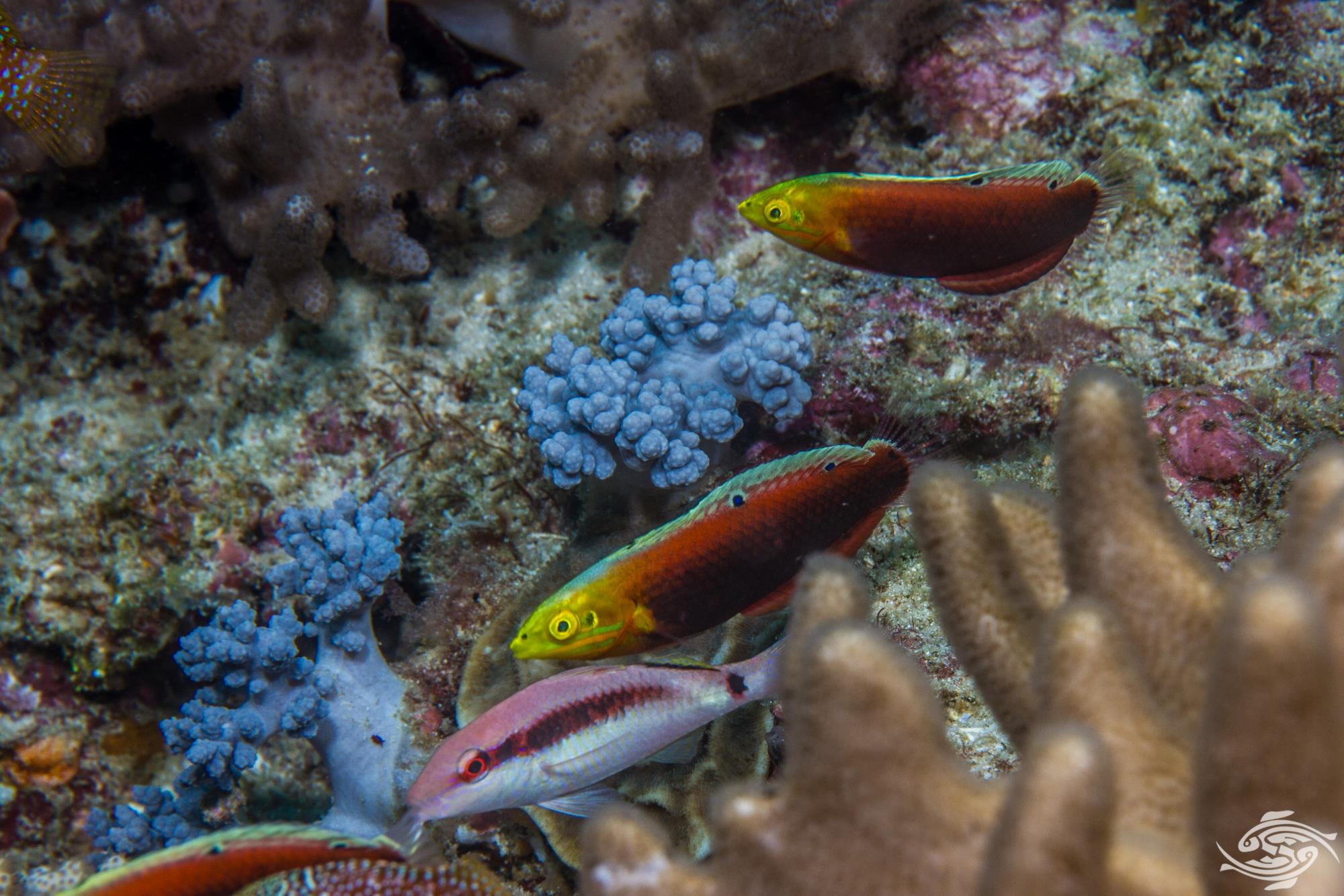 The Rainbow Wrasse  is found across the western Indian Ocean from Oman down to southern Kwa-Zulu Natal and across to the Chagos Islands including Mauritius and Reunion. 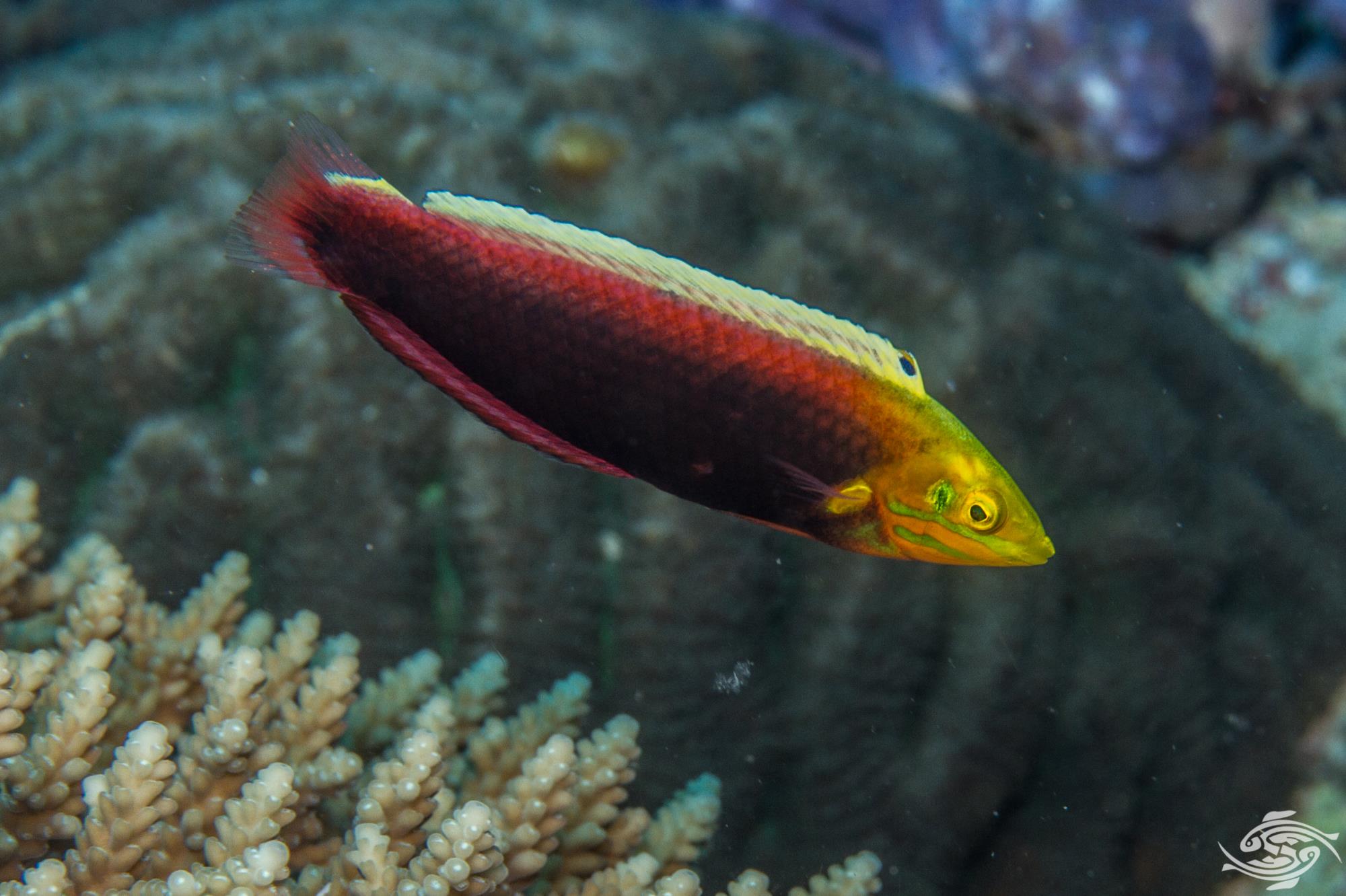 The Rainbow Wrasse feed on small crustaceans and worms and usually feed in groups moving across the reef. They feed with juvenile goatfish, other wrasses and sometimes juvenile parrotfish. 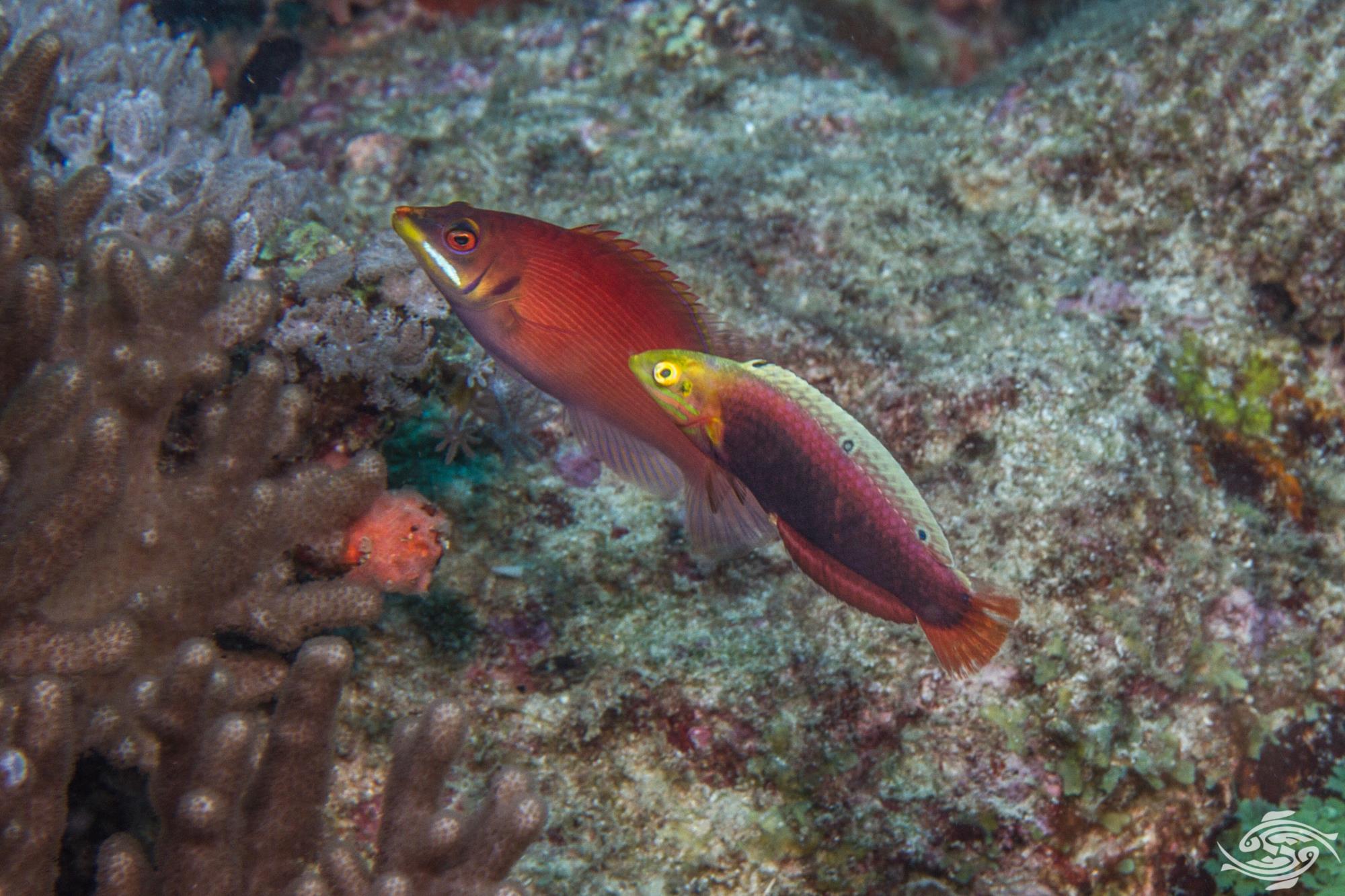 The Rainbow Wrasse is Oviparous, with probable distinct pairing during breeding. Little is known of their breeding habits. They are said to form harems with one male having four or five females around them. This is certainly borne out by the numbers as there are always many females and juveniles in an area and only one male. 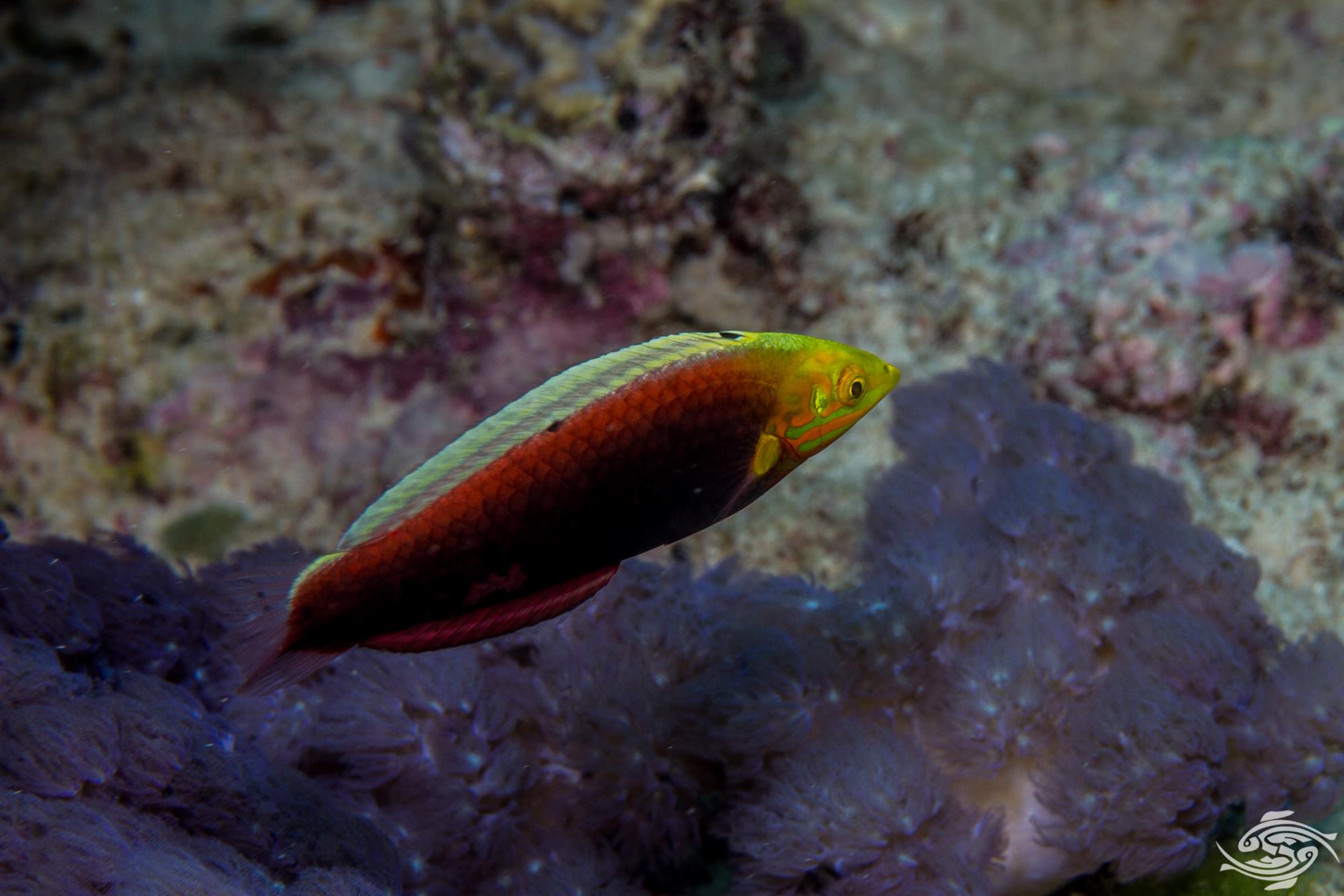 Rainbow Wrasse  are kept in aquariums but may become territorial and aggressive towards similar sized fish and because of this are not commonly kept. They require good hiding places and plenty of water to swim in. A larger tank is therefore a prerequisite. They may also take some time to acclimatize into a tank. They also need thick sand to burrow into. 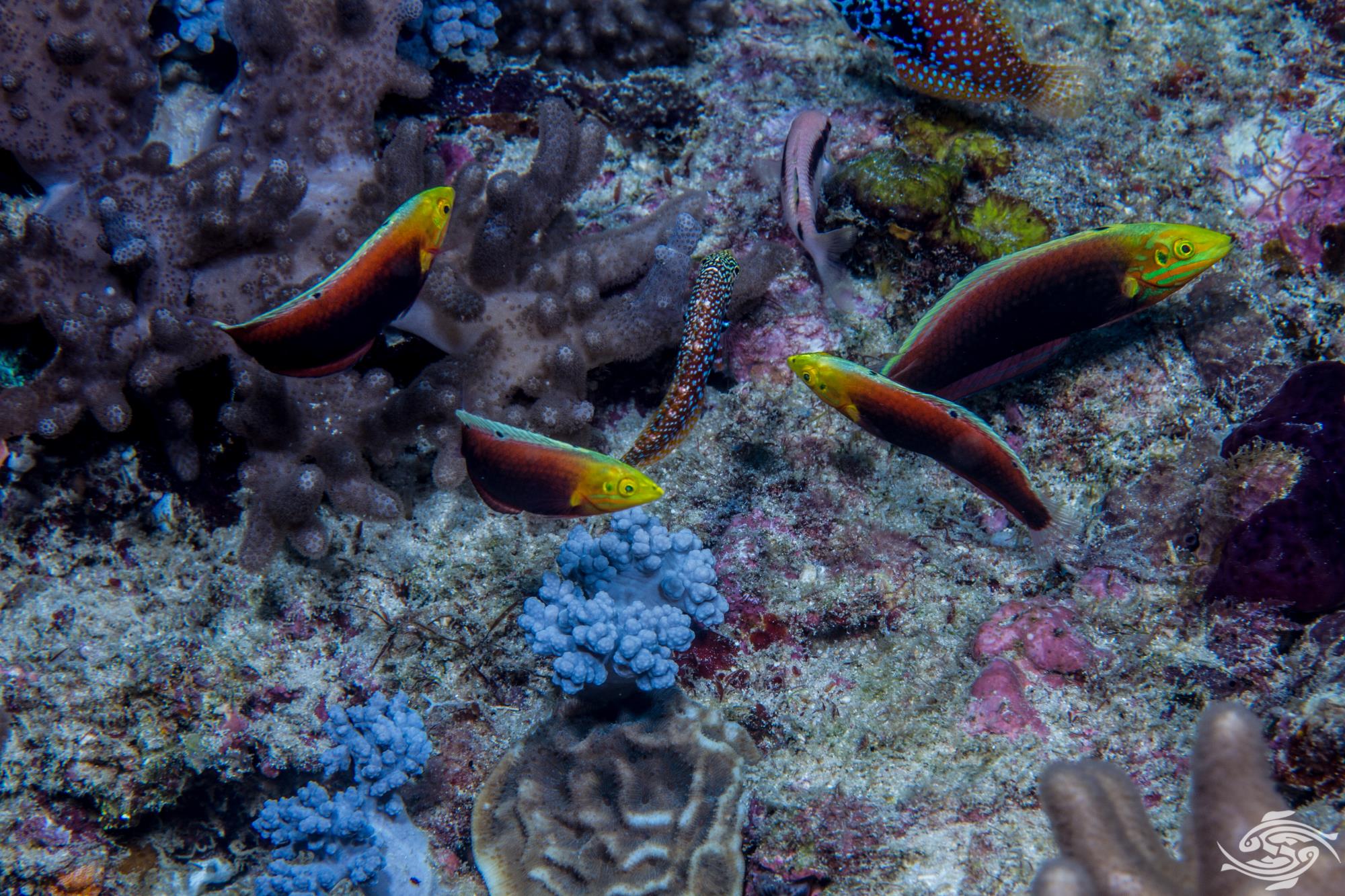 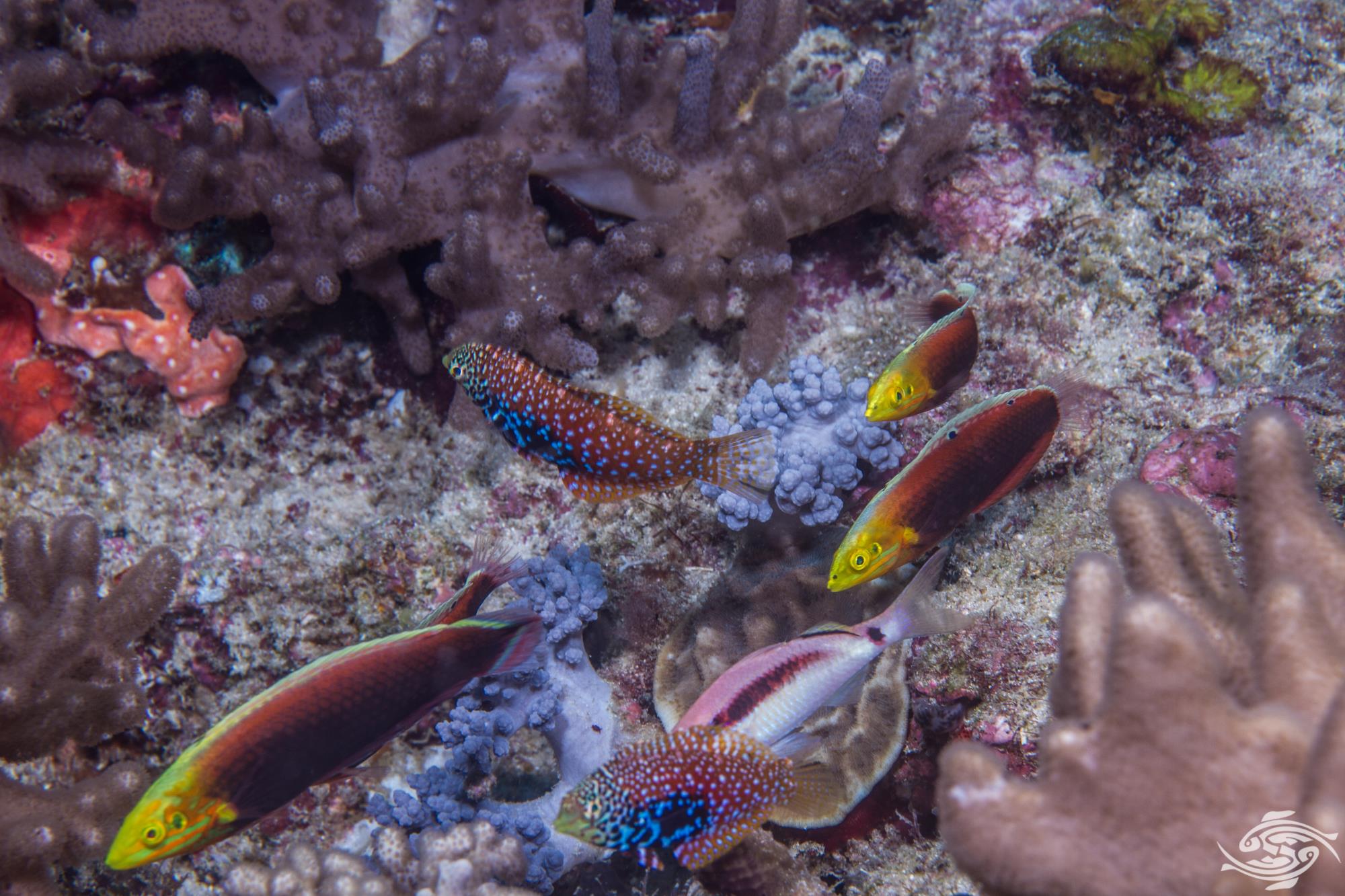