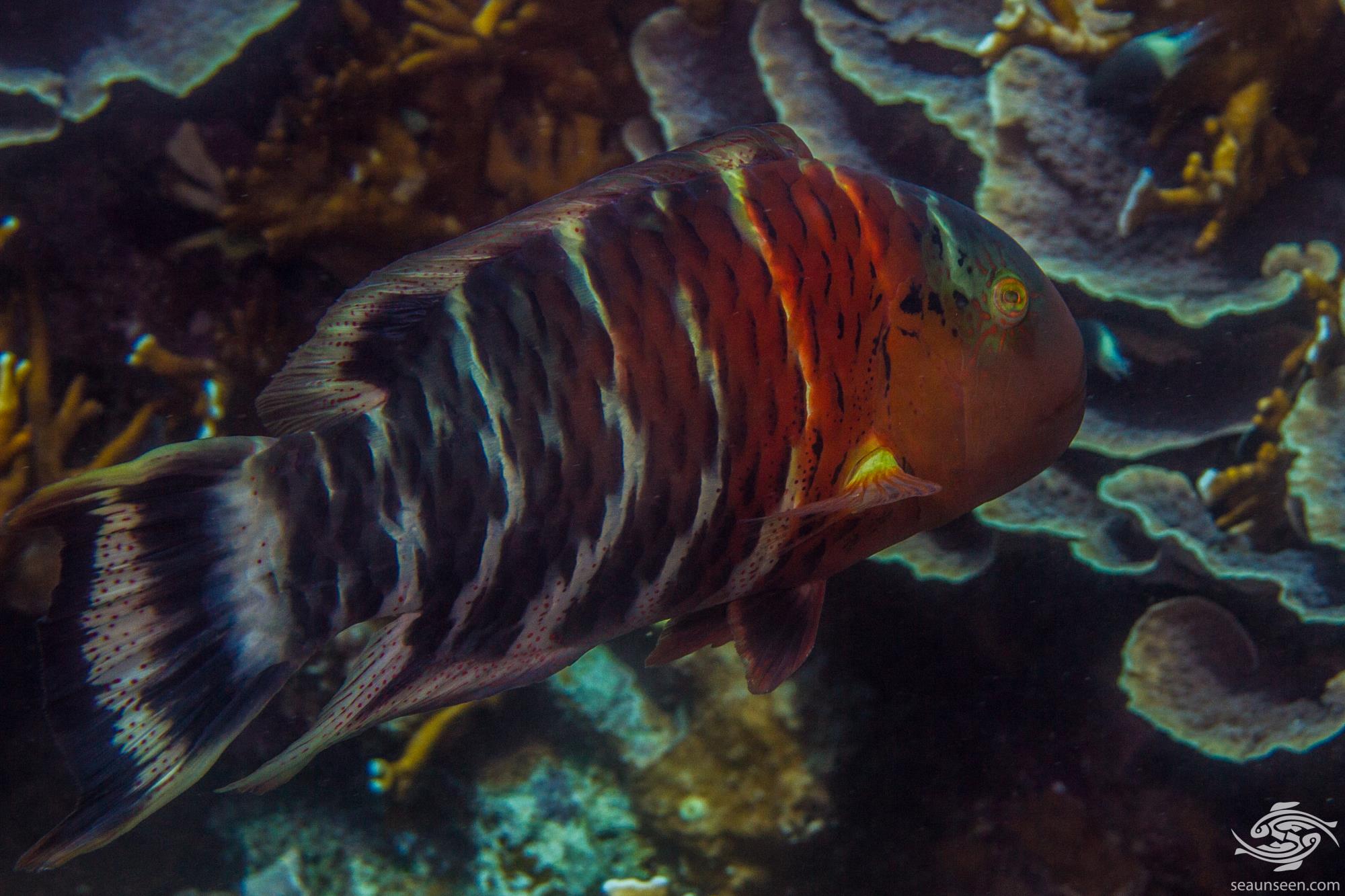 The Red-breasted Wrasse (Cheilinus fasciatus) is also known as the Banded maori wrasse, the Red-banded wrasse and the Scarlet-breasted wrasse.

Unlike most wrasses there is no major variation between the juvenile and adult stages or between males and females. The body is robust and is a dark brown colour with short black vertical lines across it.  There are usually six white vertical bars down the body and the area behind the eye is a reddish colour giving them their common name.  As the fish ages so the head becomes more rounded.  A green patch develops around the eye and red lines radiate out from the eye. The caudal fin has two black and white bars on it and there are red spots on the white bars.

Black bars develop on the body and with further aging the white bars become more prominent between the black bars. But at a certain stage in the large males these bars seem to fade. The specimen in the images was approximately 50cm in length and is almost certainly a large male. Specimens this size are very rare in Tanzanian waters. 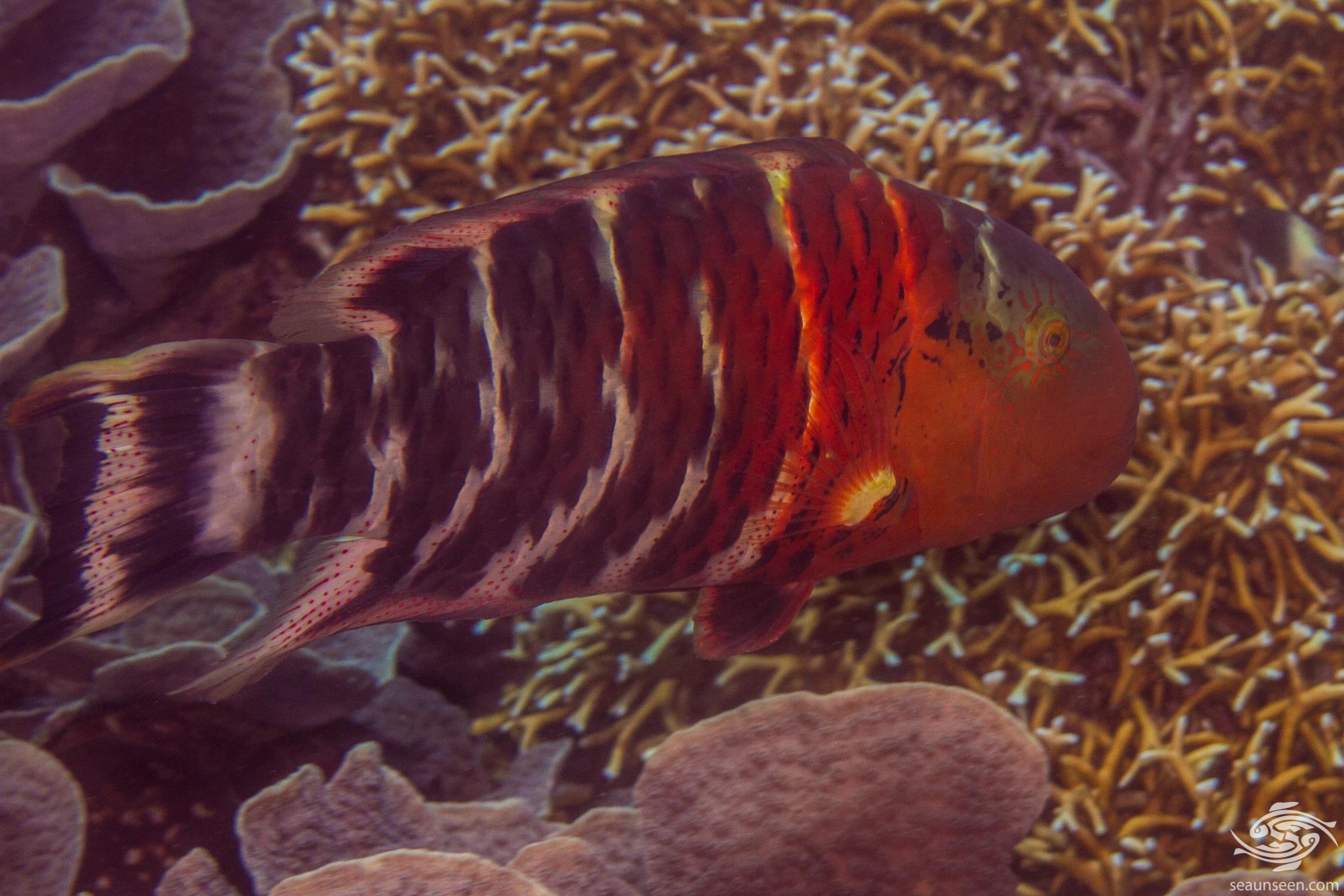 RED-BREASTED WRASSE IN THE WILD

The Red-breasted wrasse are very shy fish and are difficult to approach closely. They are not common fish and are rarely seen close up on the Tanzanian mainland coast. Usually once they see a diver they begin moving off.  They are generally seen singularly and move slowly across the reef searching for prey. The adults are more common in mixed reef – rubble-  sandy areas. The juveniles inhabit shallower waters and are often seen in sea grass beds. 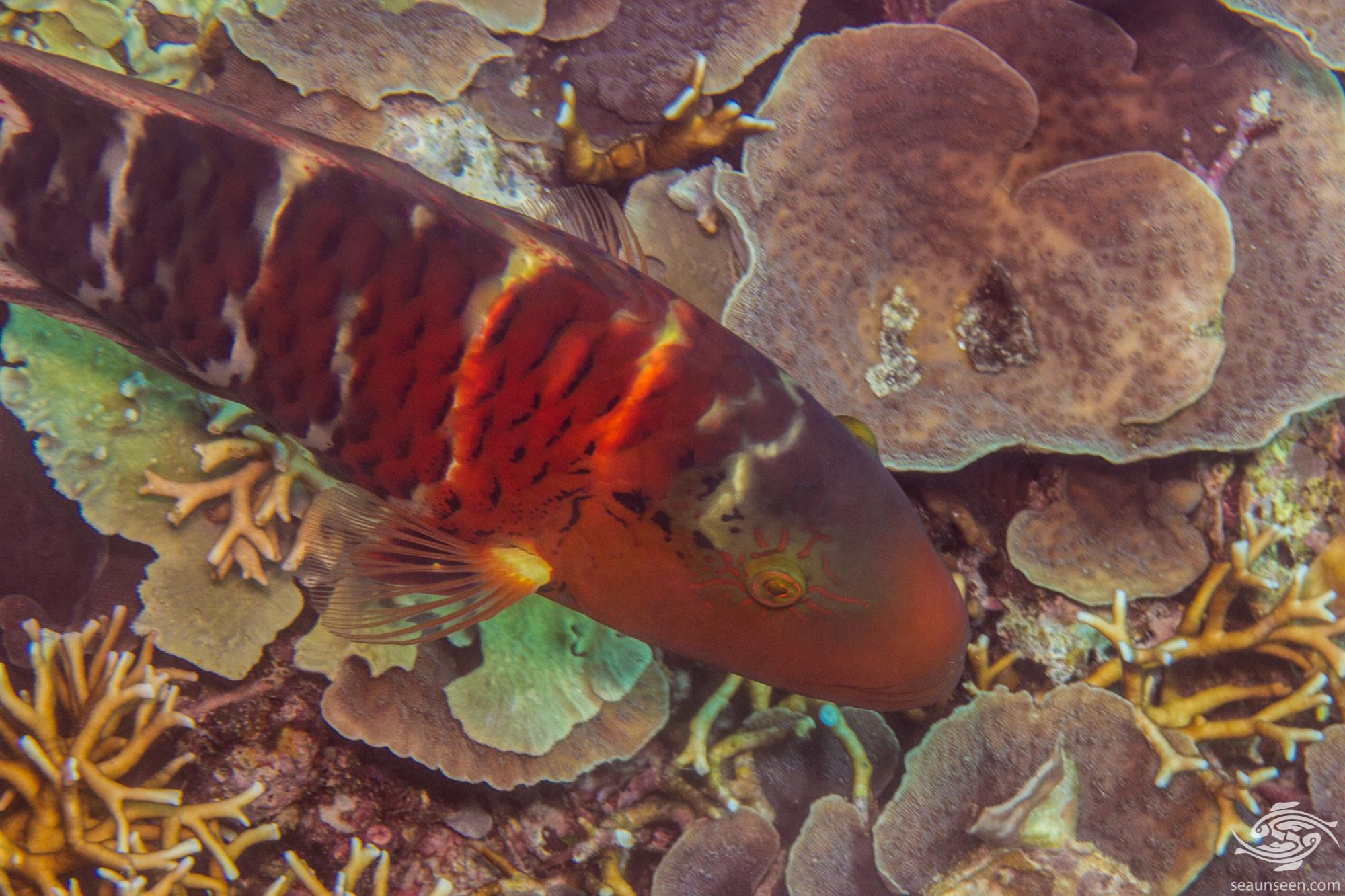 The Red-breasted Wrasse has a wide distribution and is found from the east coast of Africa across to southern Japan, down to Australia and across to the mid Pacific islands.  They seem to favor  depths of 12 to 20 meters but are found from 4 to 60 meters. 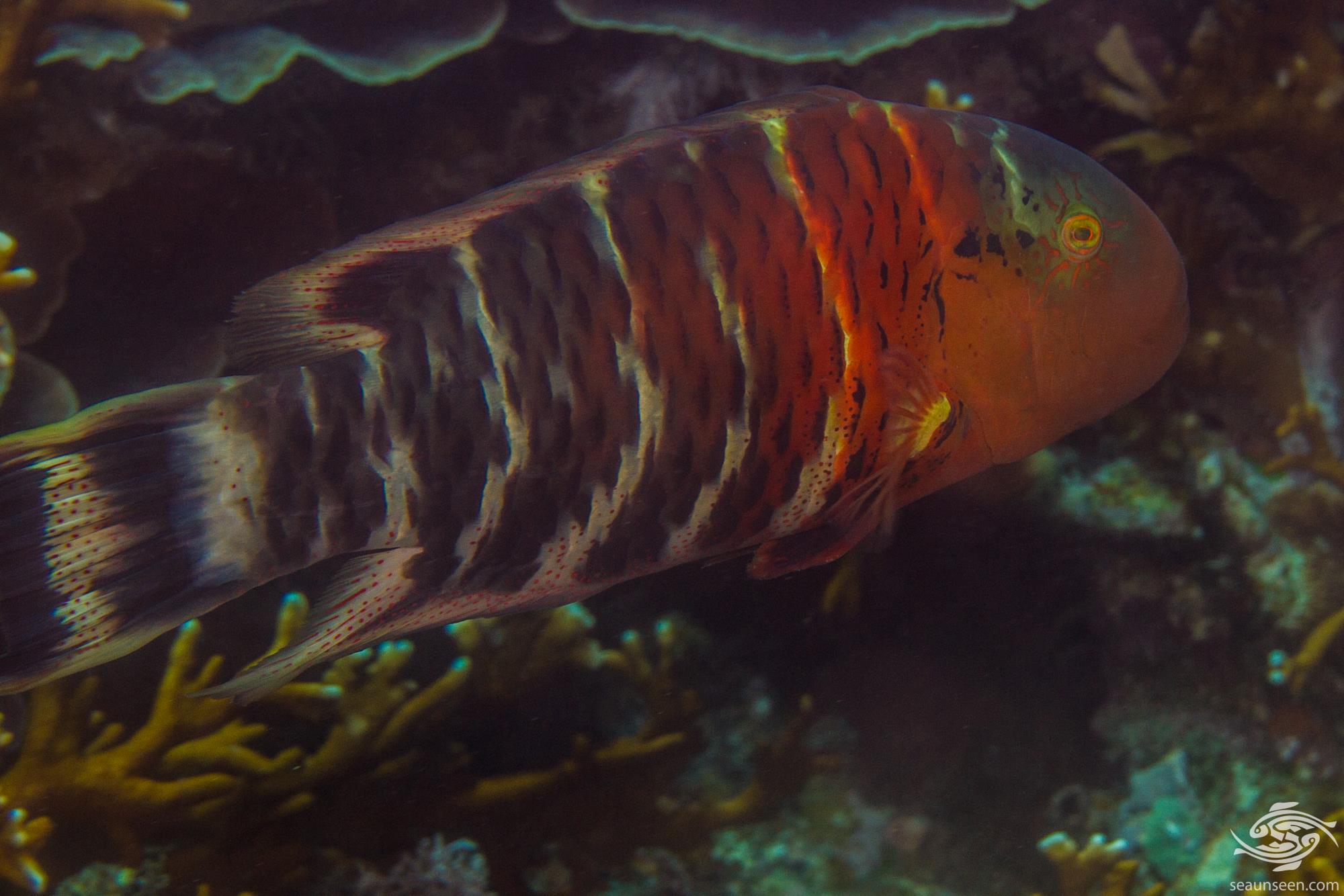 The Red-breasted Wrasse feed  on crustaceans, sea urchins, mollusks and use their strong jaws to crush hard shells.  There are two large canine teeth at the front of each jaw and these are used to crush the hard shells. 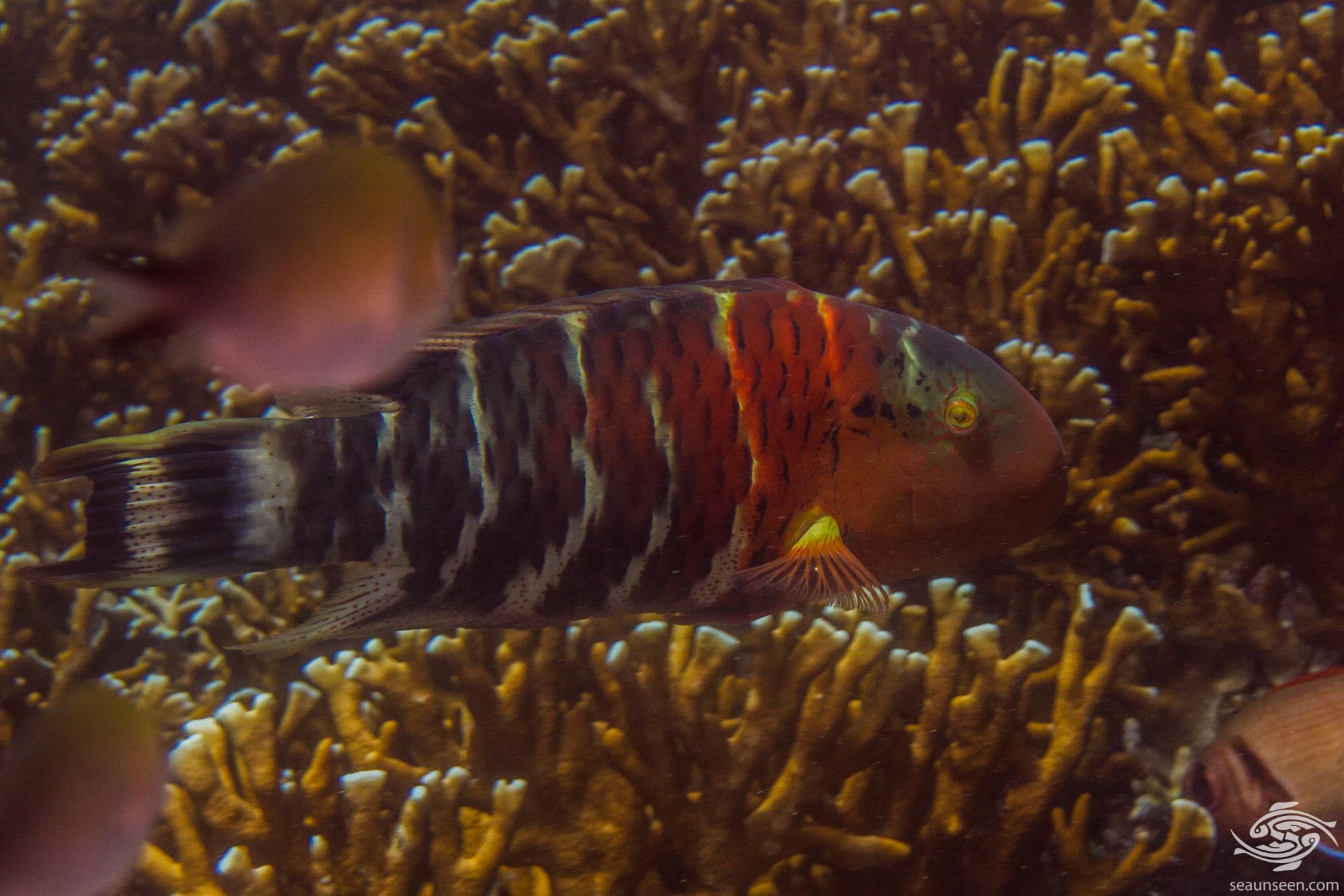 The Red-breasted Wrasse is a Protogynous hermaphrodite, they first develop into females. Some larger specimens based on social cues transform into males. They are Oviparous, with the dominant male running a harem or at times several harems of females. Spawning has been observed and they spawn above the reef in the late afternoon and early evening. Males visit the females in their territories in late afternoon to see if they are ready for mating. 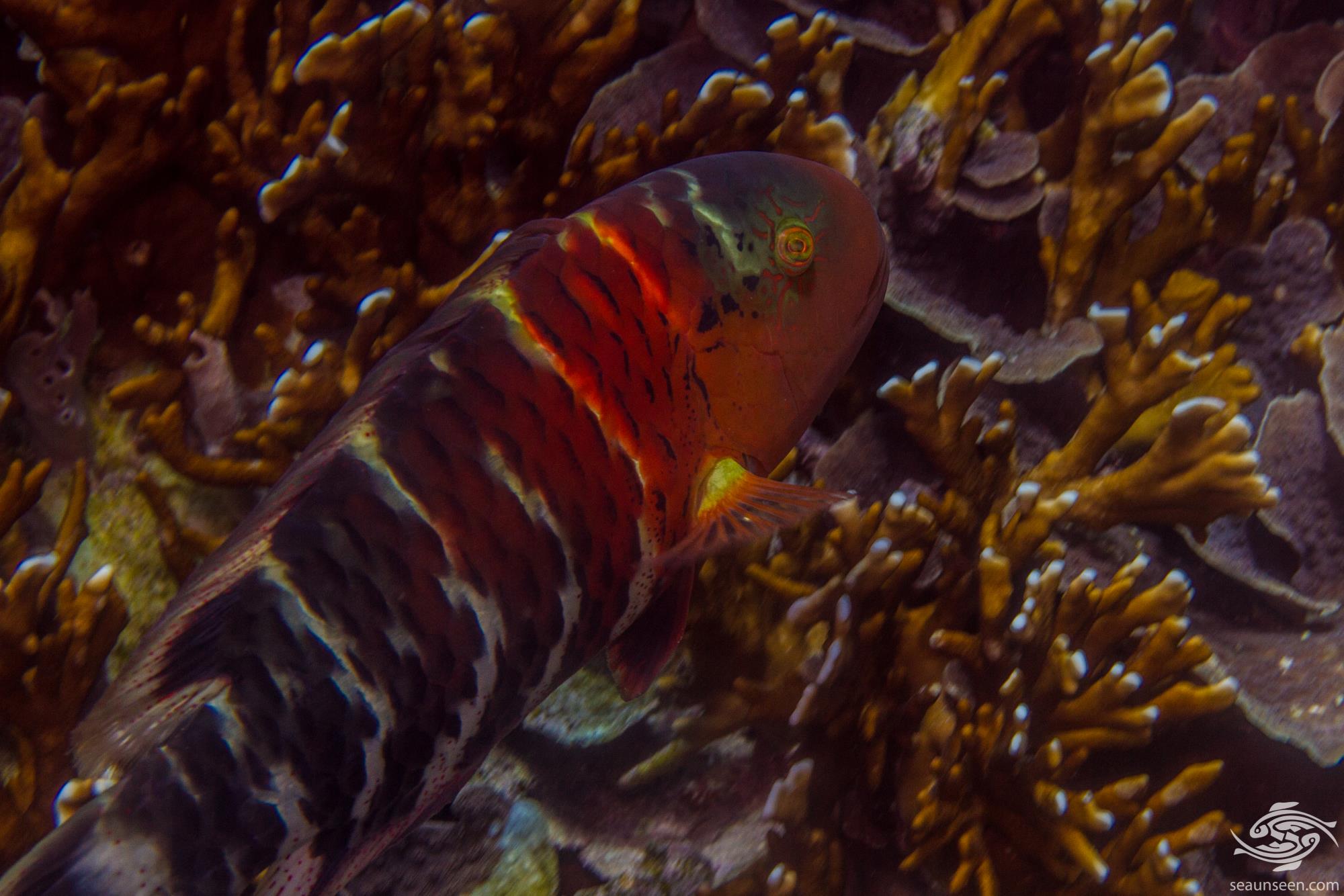 Red-breasted Wrasse are sometimes kept in aquariums but given their potential size of 60cm one would require a very large tank.