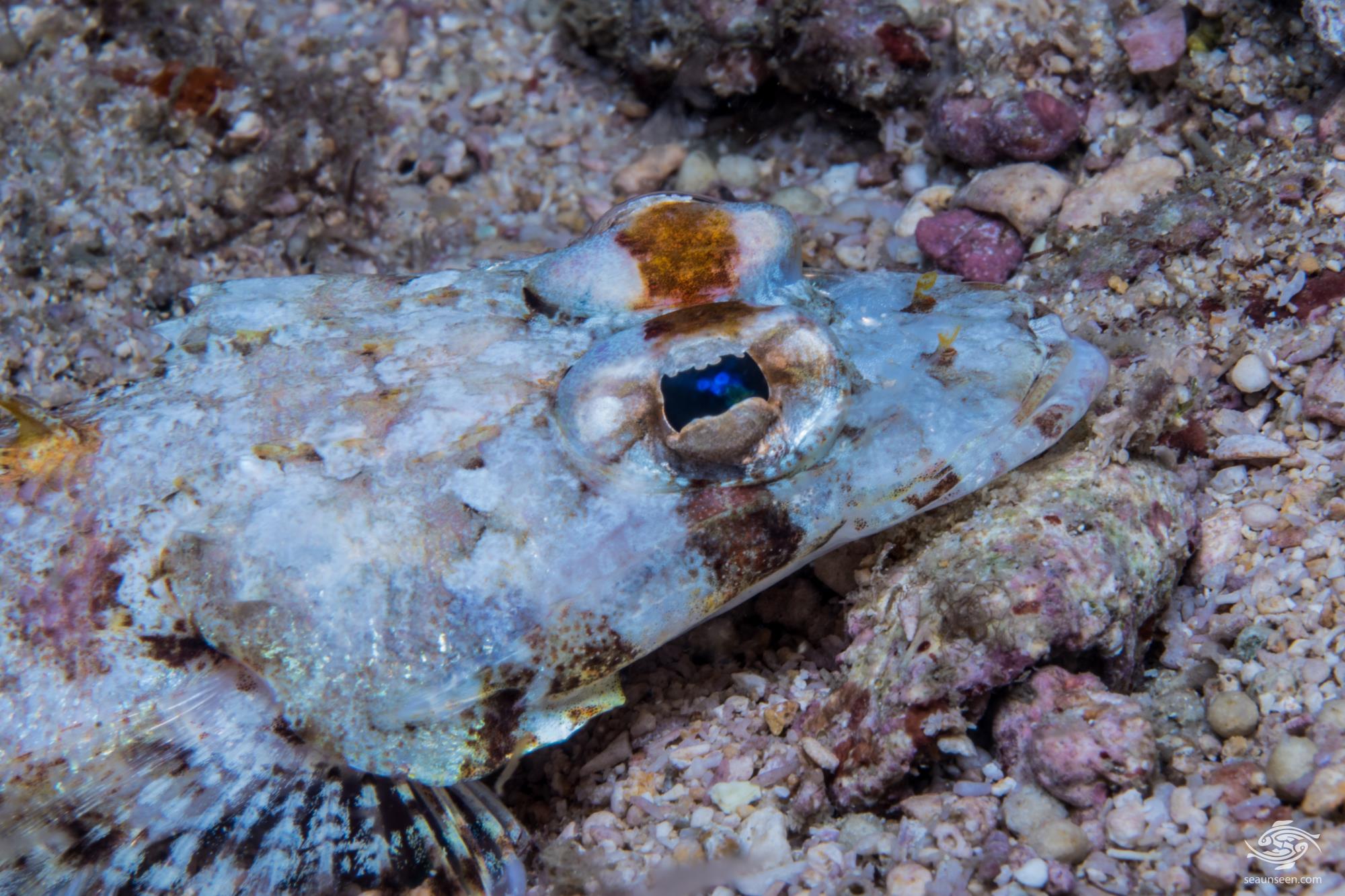 The Red Sea Flathead (Thysanophrys springeri) was only described by Knapp in 2013. They were named after Victor G. Springer, who collected the holotype off Massawa, Eritrea. They are fairly common in the shallows in Tanzanian waters. The specimens in the images were identified with the kind assistance of Elaine Heemstra and Hisashi Imamura. The specimens photographed in the images were all seen at night. 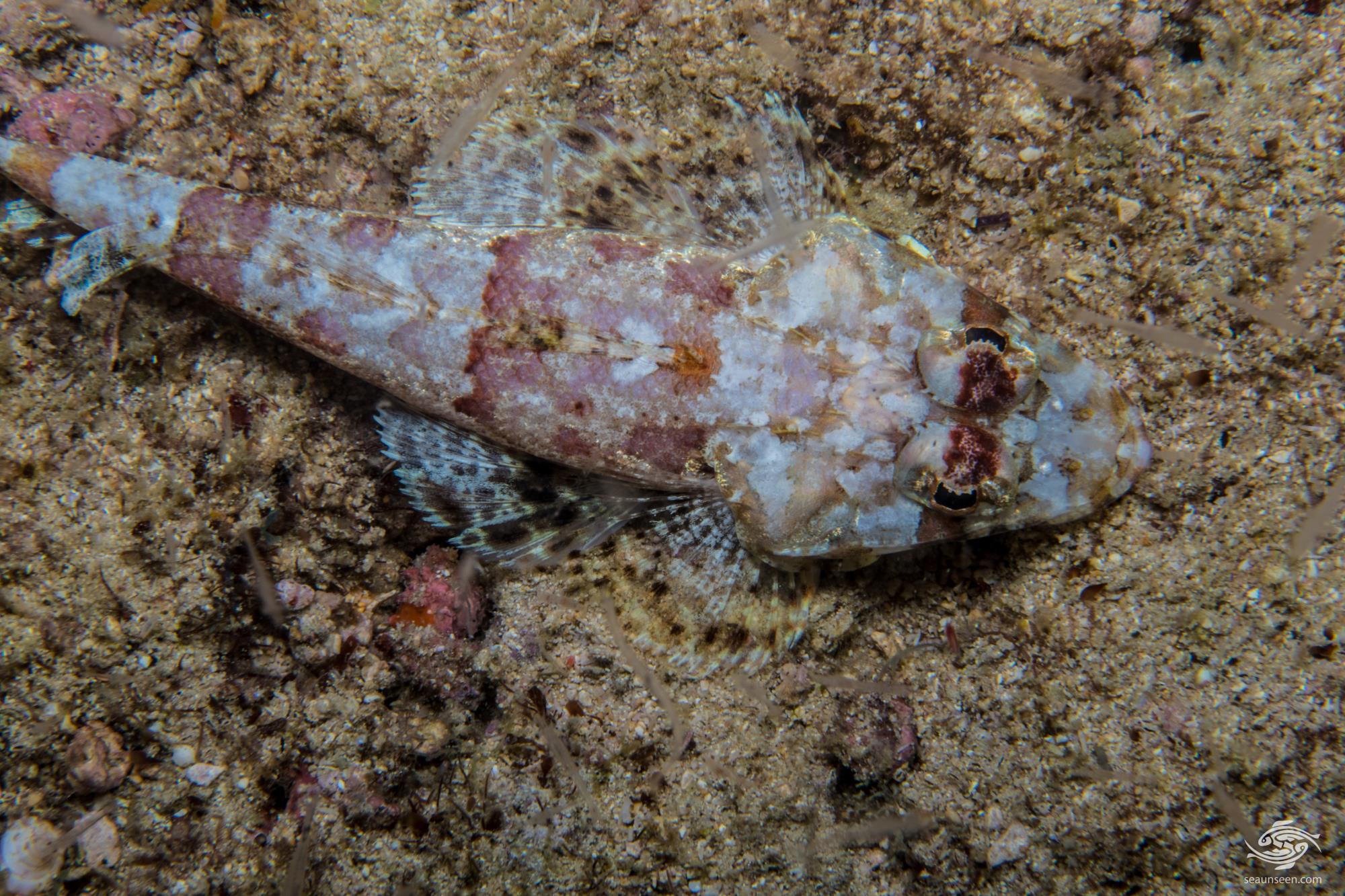 The Red Sea Flathead has a typical dorso-ventrally flattened body common with all the flatheads, with a proportionally large flat head tapering down to a narrow tail.  The body is usually fairly lightly colored being an off white color with brown or red brown mottling. There is a distinctive brown to red brown bar across the eyes extending to the top of the mouth.  The eyes are set on top of the head quite close together. The eyes do not have extensive tassels as do other members of the genus.  There are a series of three to four indistinct bars on the body behind the head.

The pectoral fins are which are spread to the side when it is sitting on the bottom are also a mottled white and red brown color. They seem to grow up to approximately 10 to 12 centimeters. 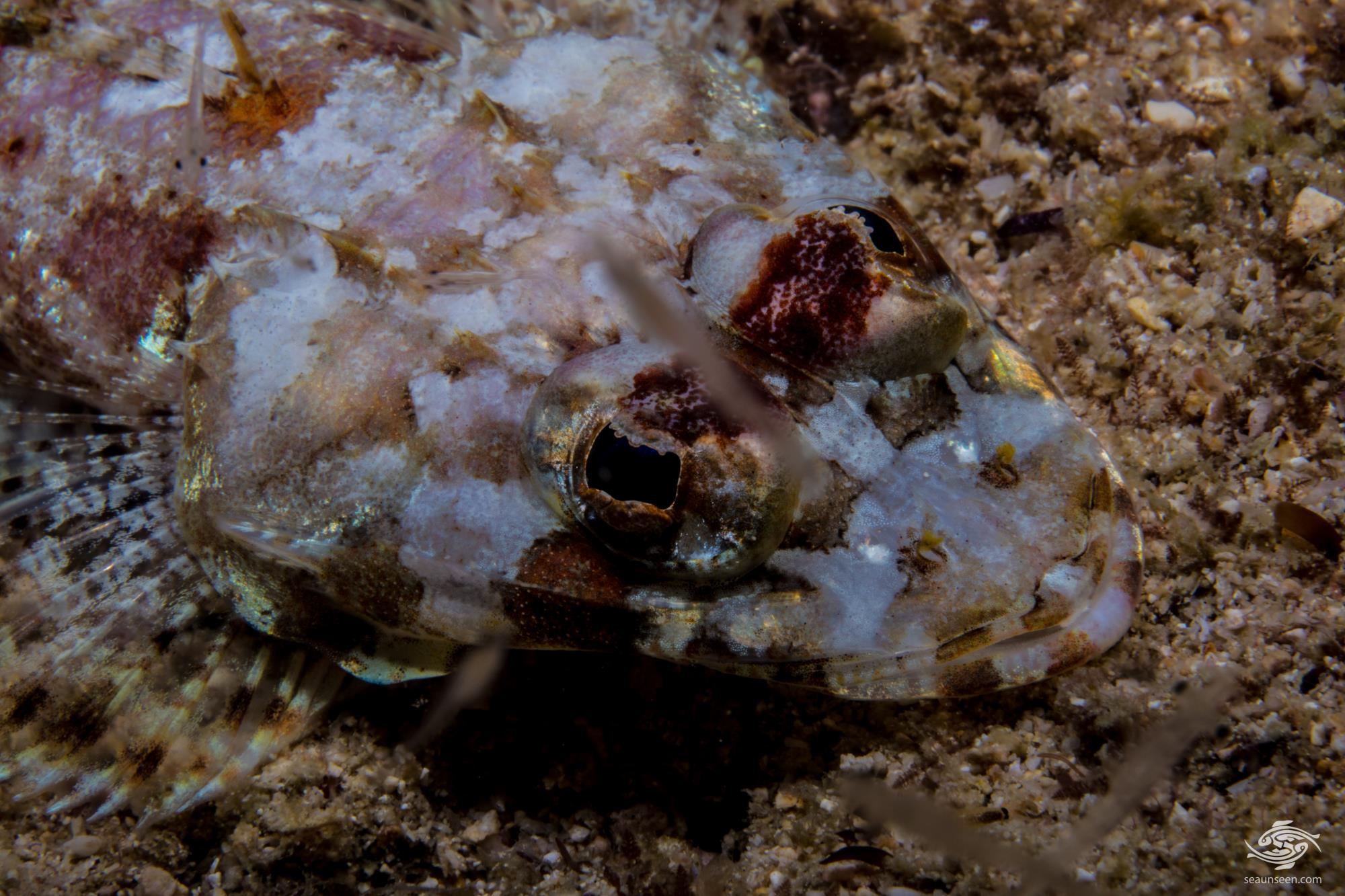 RED SEA FLATHEAD IN THE WILD

The Red Sea Flathead is fairly common in Tanzania in the one to three meter range on a low tide over mixed rubble areas. Their colouration and flat body camouflage them fairly well on the rubble. They seem to be more active at night , or certainly one sees more of them at night out in the open and presumably they feed at night. The visibility in these areas is usually very poor and presumably they have some sensory mechanism to pick up approaching prey. When approached they do not move and rely on their camouflage to protect them. Being ambush predators they sit and wait for their prey to come to them. 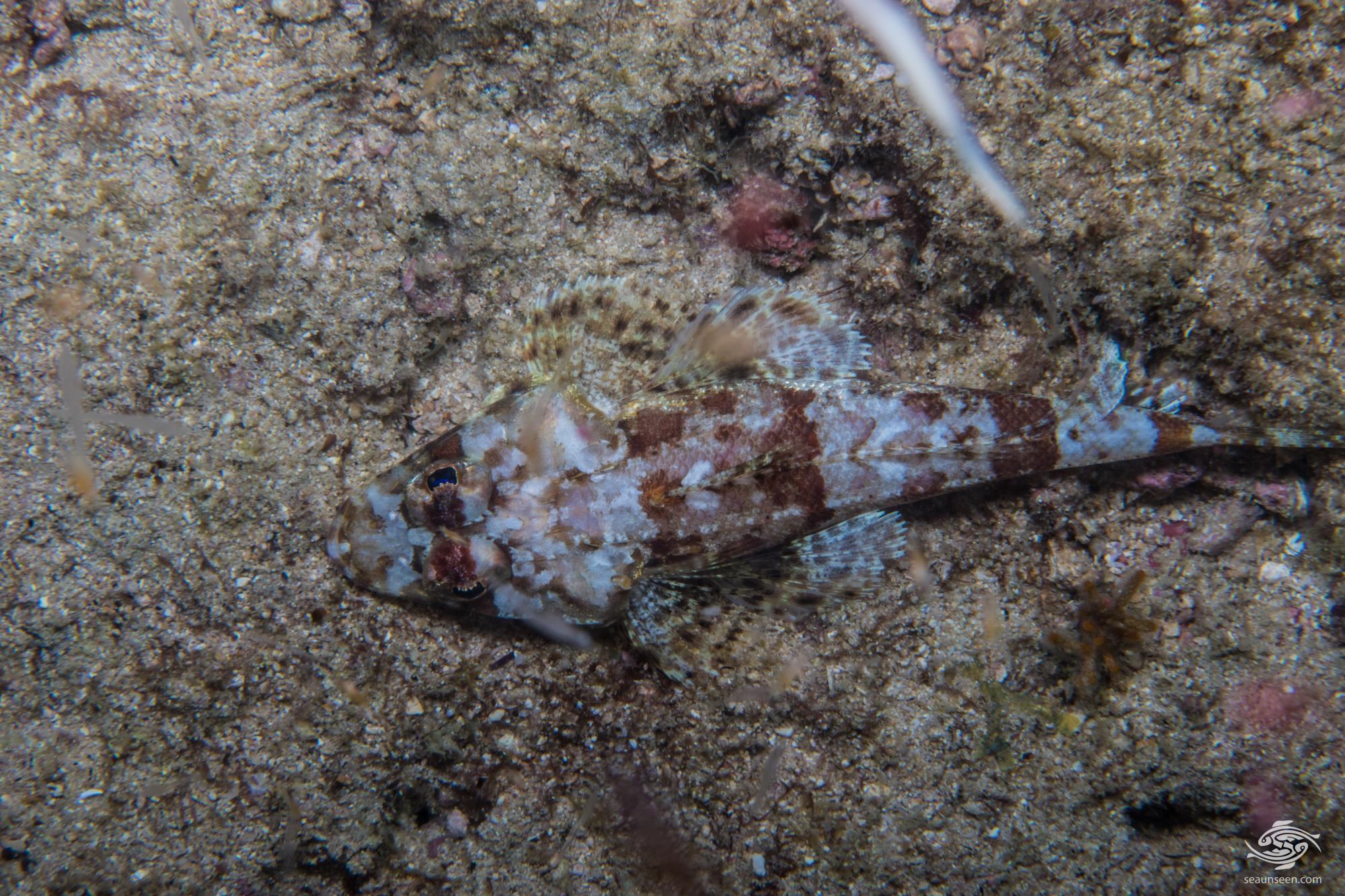 Red Sea Flatheads have been found in the Red Sea as far south as Djibouti and now in Tanzania.  Empirically their depth range seems to be from one to seven meters but we have seen more in the two to three meter range.  We have never seen them on sand, only on mixed rubble. 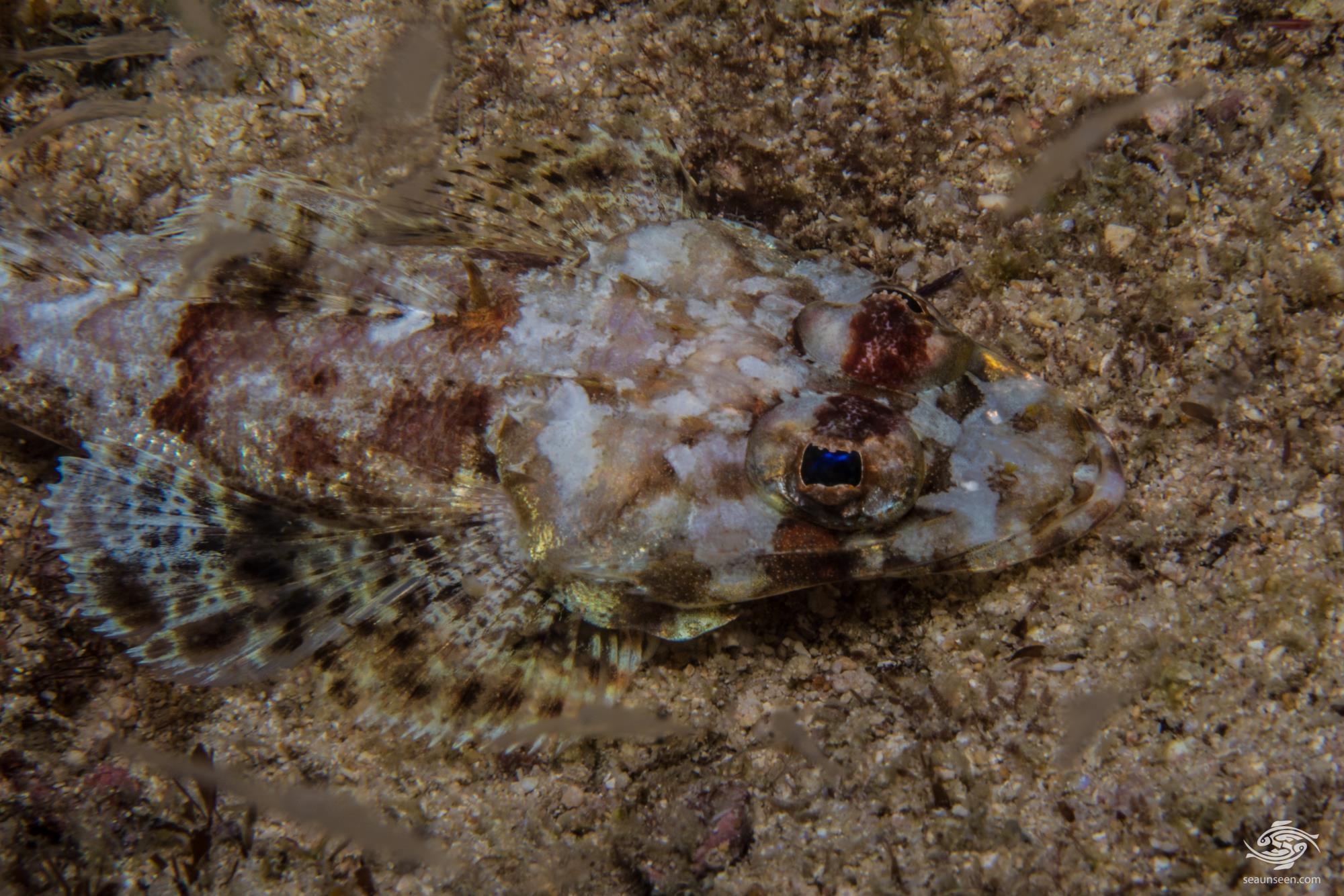 Red Sea Flathead probably eat almost anything that will fit into their mouths and to some extent their diet is probably dictated by whatever swims past. Any fish, squid or crustacean unlucky enough to swim within proximity of their jaws will probably end up in them. 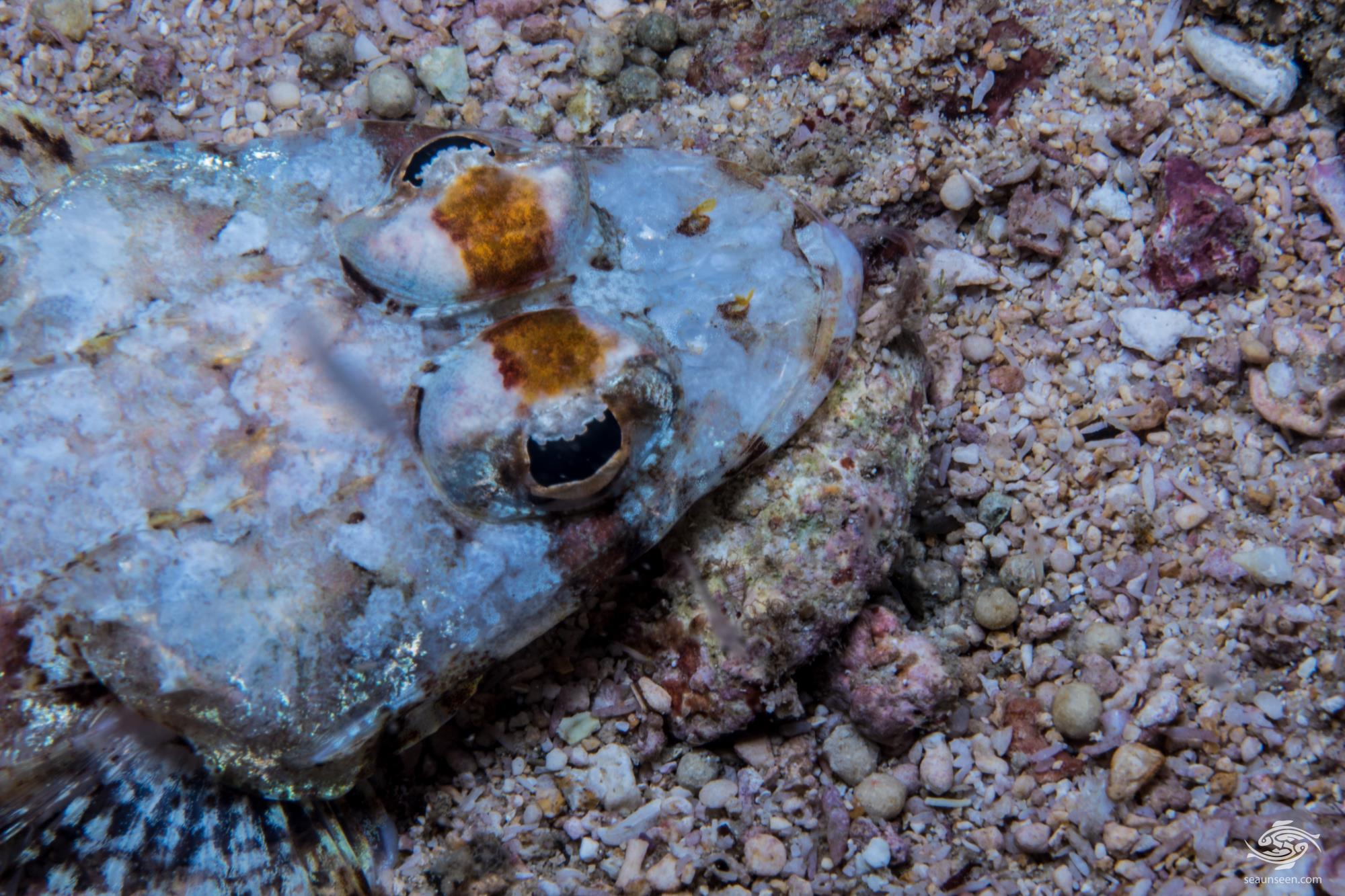 Some aquarists keep unusual fish from the same family but as a certainty they would eat anything that fits in their jaws. Generally only the large commercial aquariums will keep such fish and they would certainly prefer live food. 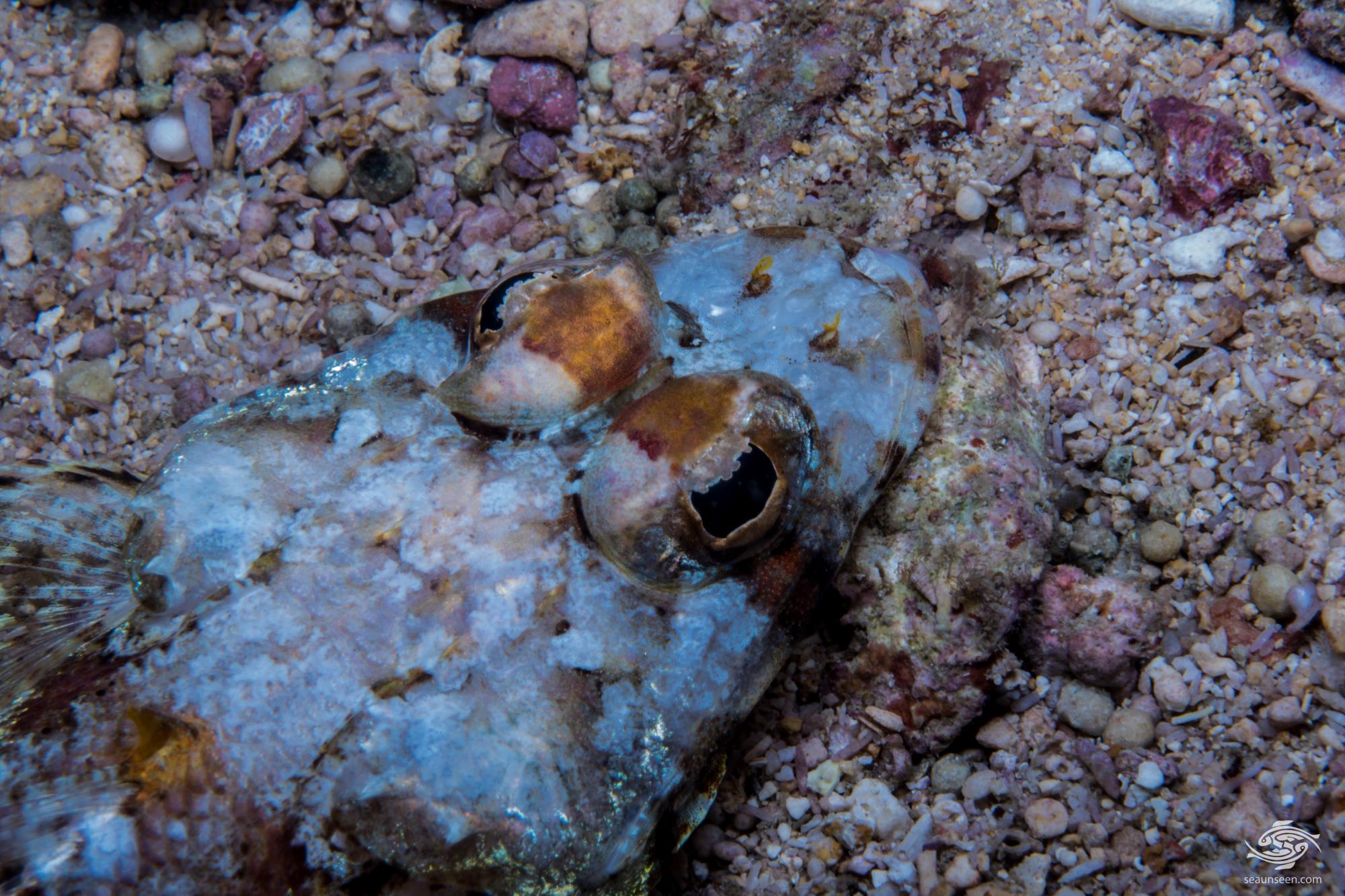