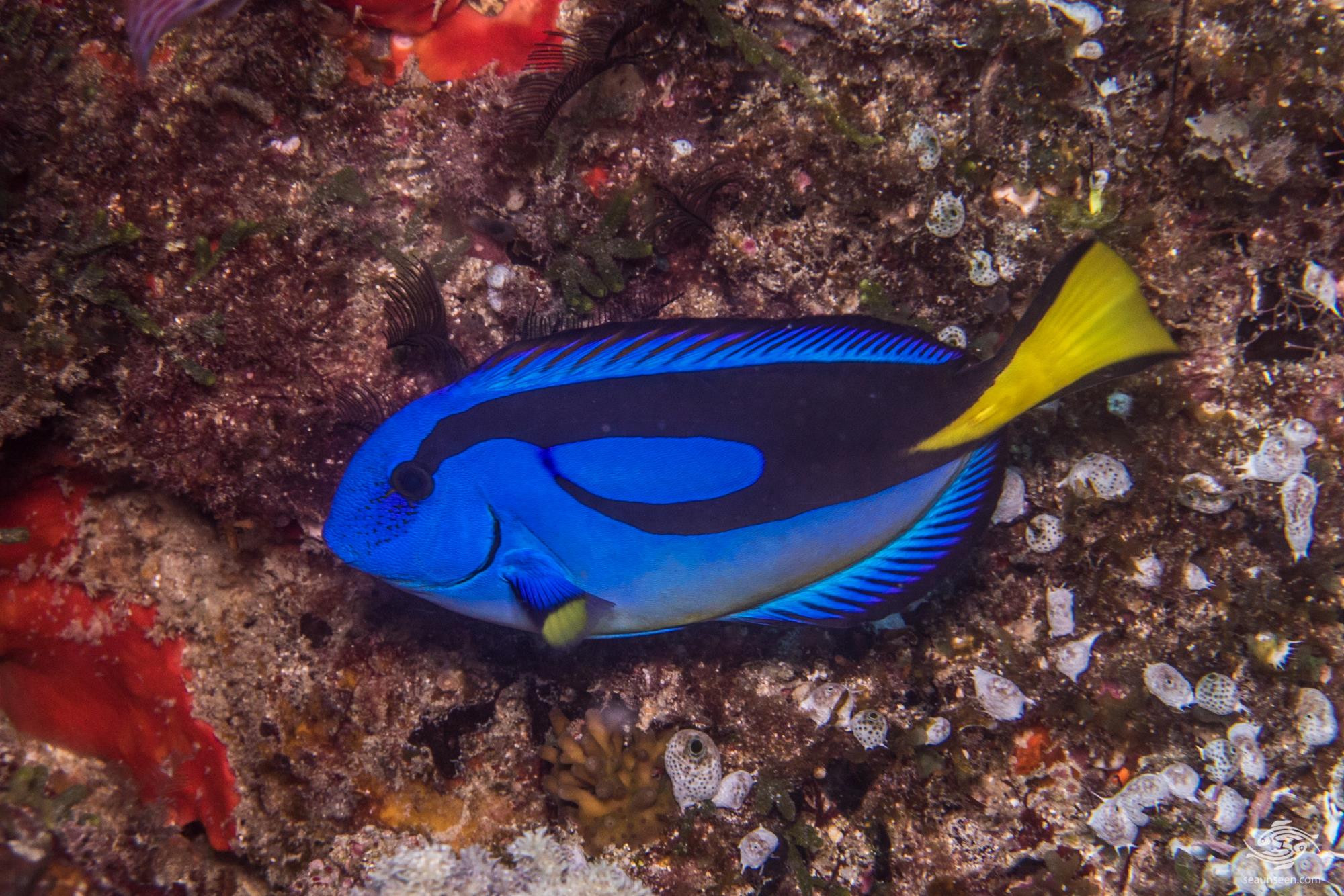 The Regal Blue Tang (Paracanthurus hepatus) is also known as the  Blue Tang, the Palette Surgeonfish, the Hepatus Tang  and of course more famously as Dory from the Pixar movies “Finding Nemo” and “Finding Dory“.  They obtain their common name the Palette Surgeonfish from the resemblance of the black pattern 0n the body to an artists palette. They are the only member of the genus Paracanthurus.

Members of the Acanthuridae family have a retractable razor sharp spine on either side of the caudal area. They obtain their name Surgeonfish from these blades.  The blades are used for defense and possibly in territorial disputes and can inflict significant damage. The blades are reported to contain toxins but there seems no scientific evidence for this. On the Regal Blue Tang the blade is not as well developed as on some other Surgeonfish.

The caudal fin has a wedged shaped yellow mark on it extending from just in front of the blade onto the fin and this mark is lined in black. There are normally a few fine black dots or marks in the facial area. They grow up to 30 cm in length but around 15-20 cm is more common in the wild. The pectoral fin is yellow on the tip and on some specimens the dorsal fin has yellow on the spines. 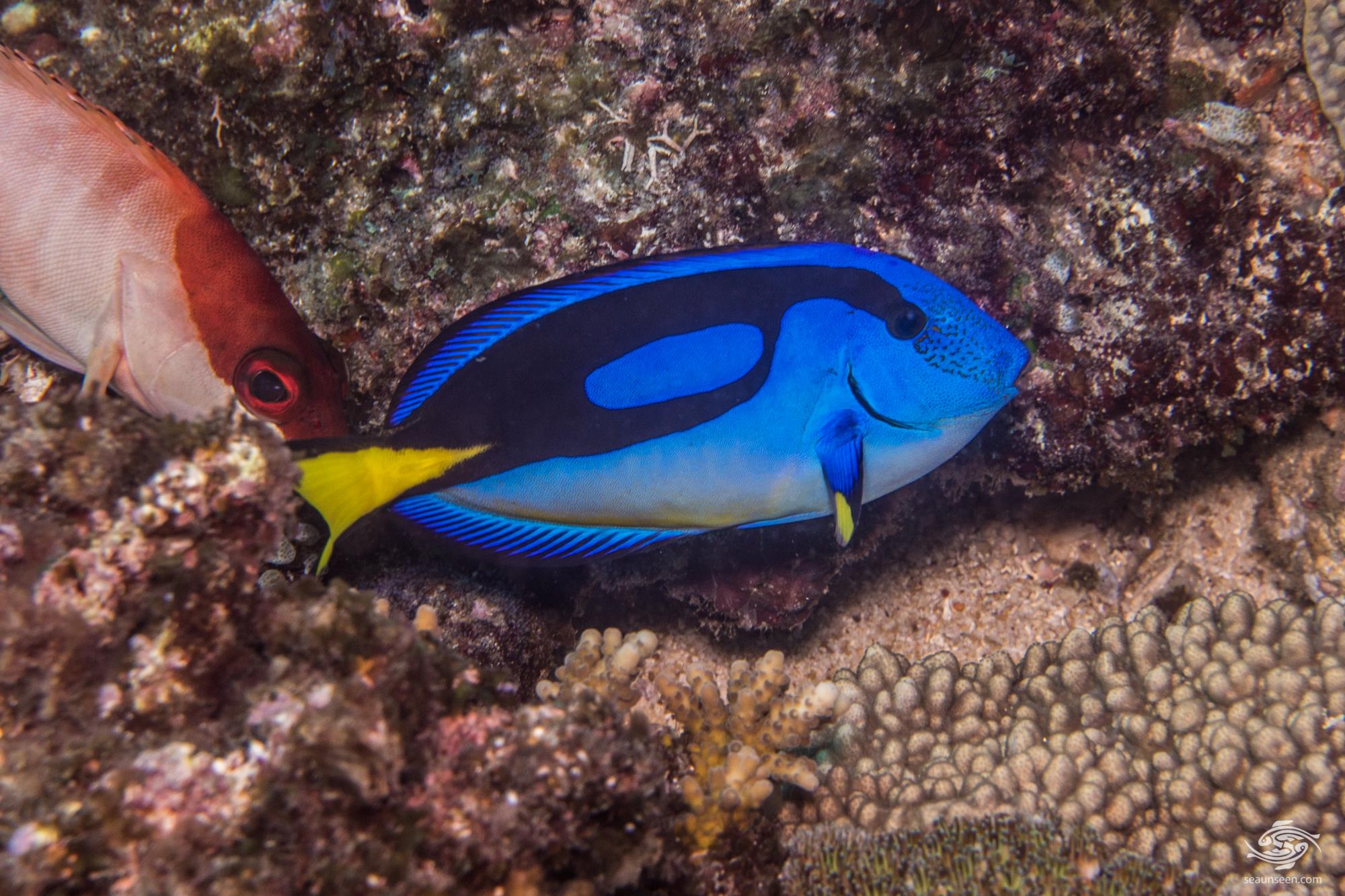 REGAL BLUE TANG IN THE WILD

The Regal Blue Tang is not that common on the East Africa coast and tend to be found in small groups of five to ten fish that spend time in an area but move regularly. They tend to be found on open seaward reefs or gully’s with a fair amount of current.

The juveniles are seen individually in shallower more protected reefs usually in small shoals above acropora corals and are quick to dart into the coral, only emerging after the diver is a considerable distance away. 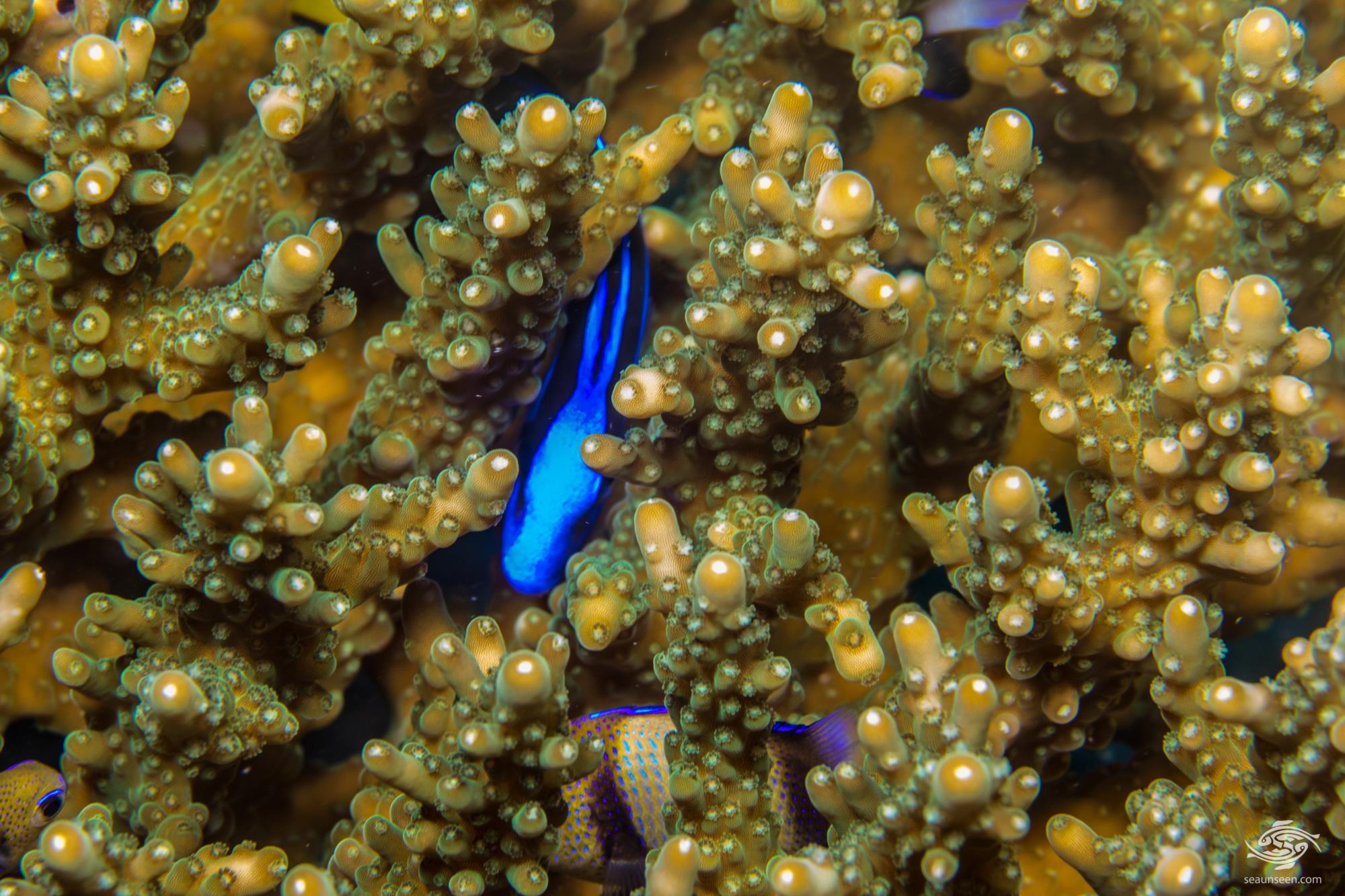 The adults are not quite as shy but when approached will hide in crevices and tend to emerge quite quickly and will come out to inspect the diver.  If they feel threatened they will go into a crevice and not come out until the diver has left the area. They have to be approached quite cautiously to get close to them.

They are found between two to forty meters but seem most common in the eighteen to twenty five meter range during the day. At night they are sometimes seen on the reef in shallower water , from eight to ten meters. 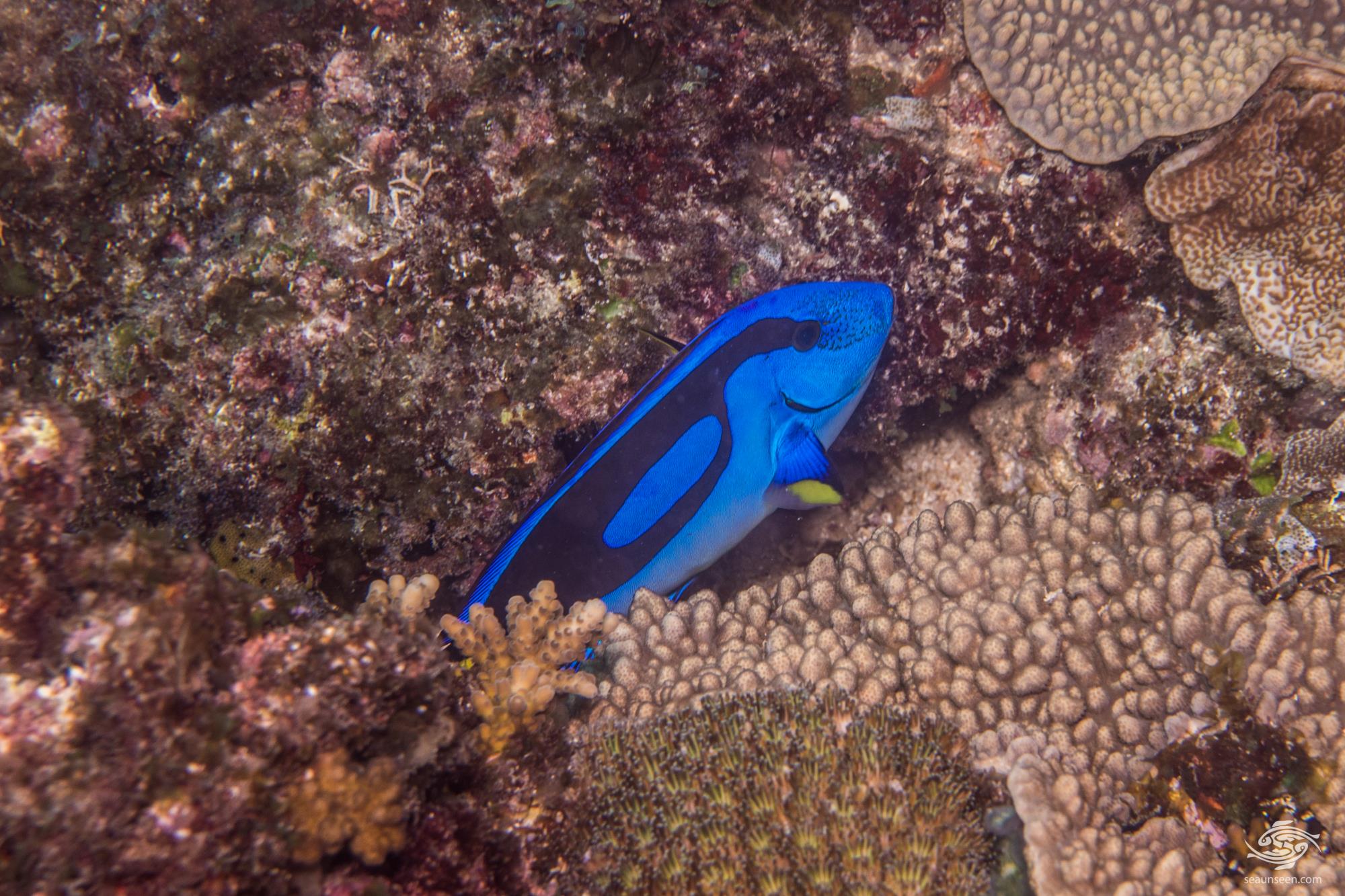 Regal Blue Tang are found across the Indo Pacific area from East Africa to Southern Japan and across to  the Pacific Islands.  In Tanzania they are most common around the 18 to 25 meter range. A single specimen has been found in Bat Yam in Israel, in Medditeranean waters indicating that the species has been released in the area as they are not found in the Red Sea. 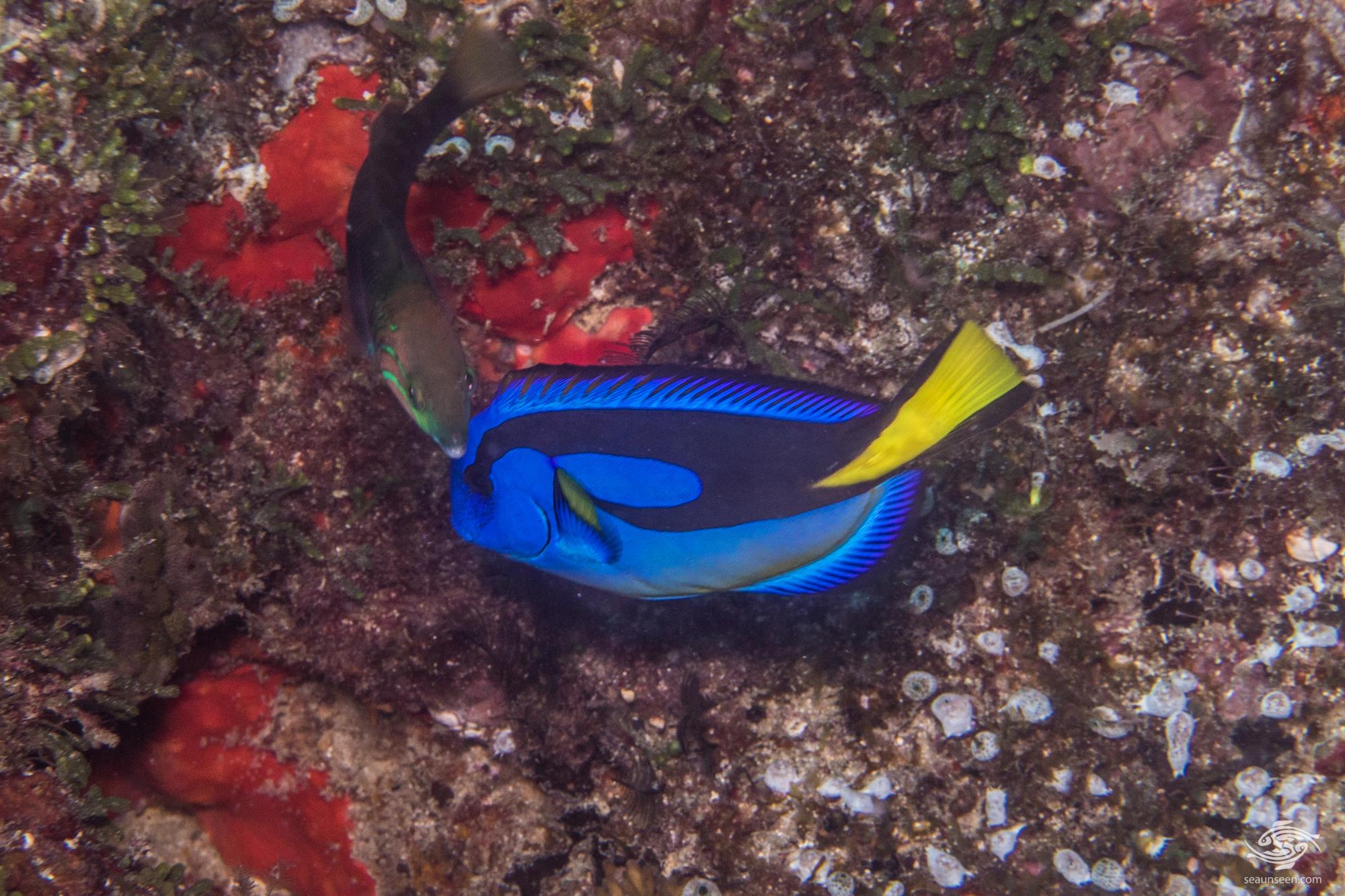 Group spawning takes place with the females releasing spawn into the water table ( known as broadcast spawning) and the males fertilizing the eggs. Large aggregations often take place during spawning. Once the eggs hatch the larvae go through a planktonic stage before settling down. They become sexually mature at around 10 cm.

Spawning aggregations form around outer reef slopes and they are believed to spawn all year on the new  moon. While spawning the colors are lightened to a lighter blue color. 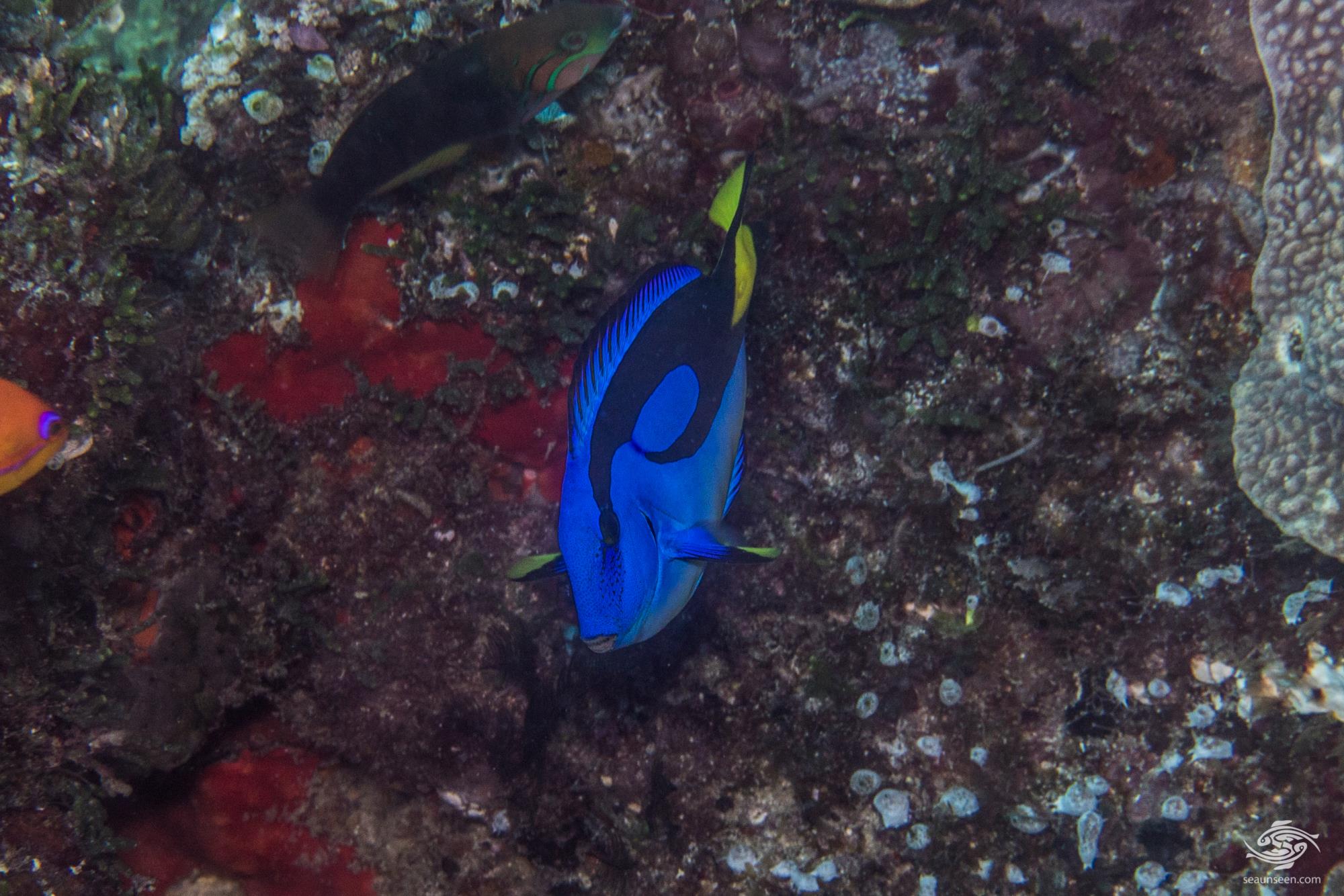 Regal Blue Tang are highly sought after by aquarists as they are colorful peaceful fish.  They are  reasonably easy to feed and keep but a big part of their diet should be algae in one form or another to keep them healthy.  Great care should be taken when moving them as their blades can easily snag in a net or worst case pierce a bag. Unfortunately they are often kept in small aquariums and they are never happy in these, preferring to have hiding places and space to swim in.

Larvae have been successfully raised in captivity and it is possible that in the future this will take the pressure off of wild stocks. 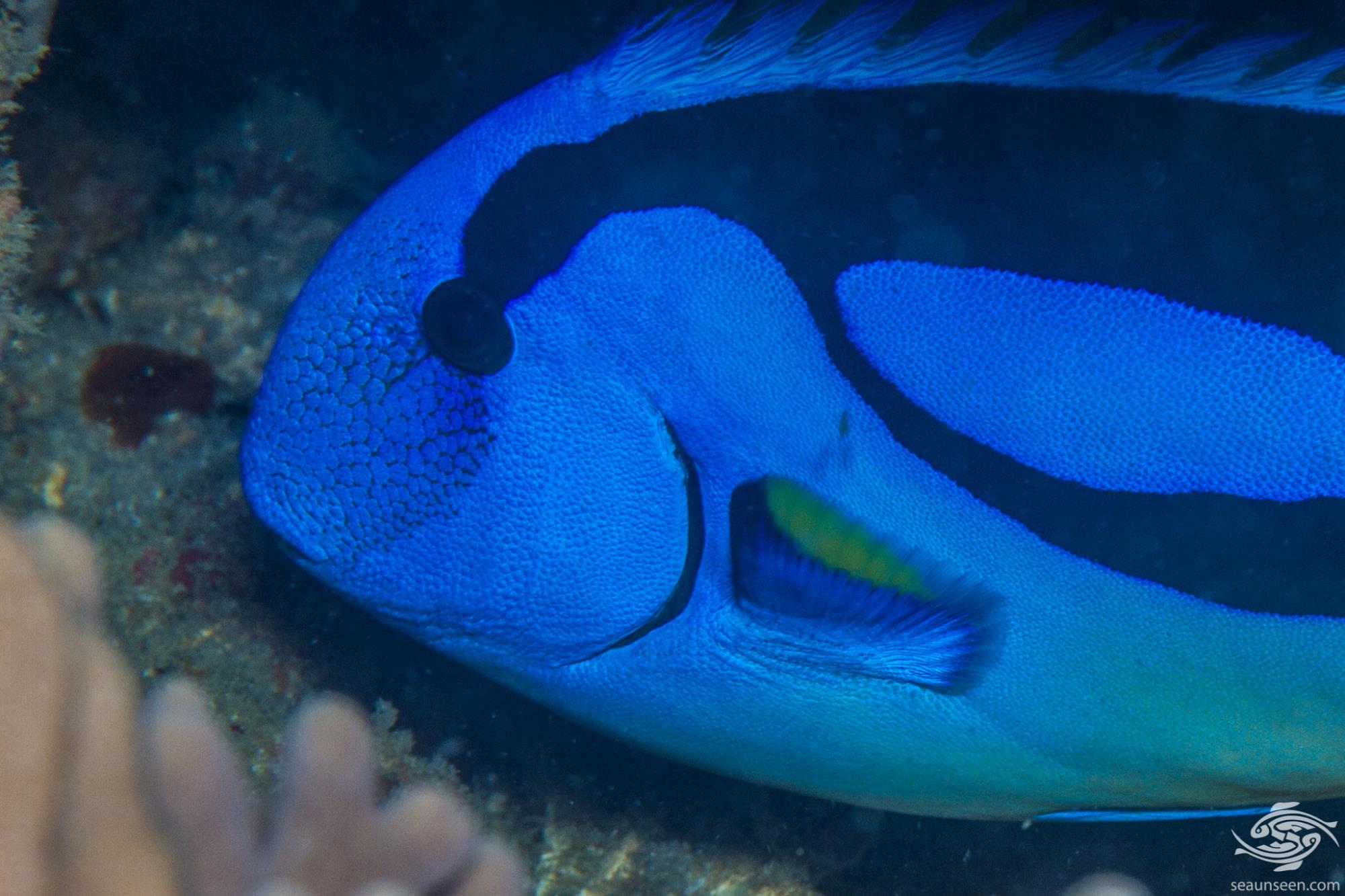 They are the eighth most traded aquarium species worldwide and this places considerable pressure on the wild populations.  Juvenile blue tangs are mainly targeted, and are easy relatively easy to collect as they school over Acropora corals for shelter.

The meat reportedly has a strong smell and is used by fishermen as bait, apparently being very good.