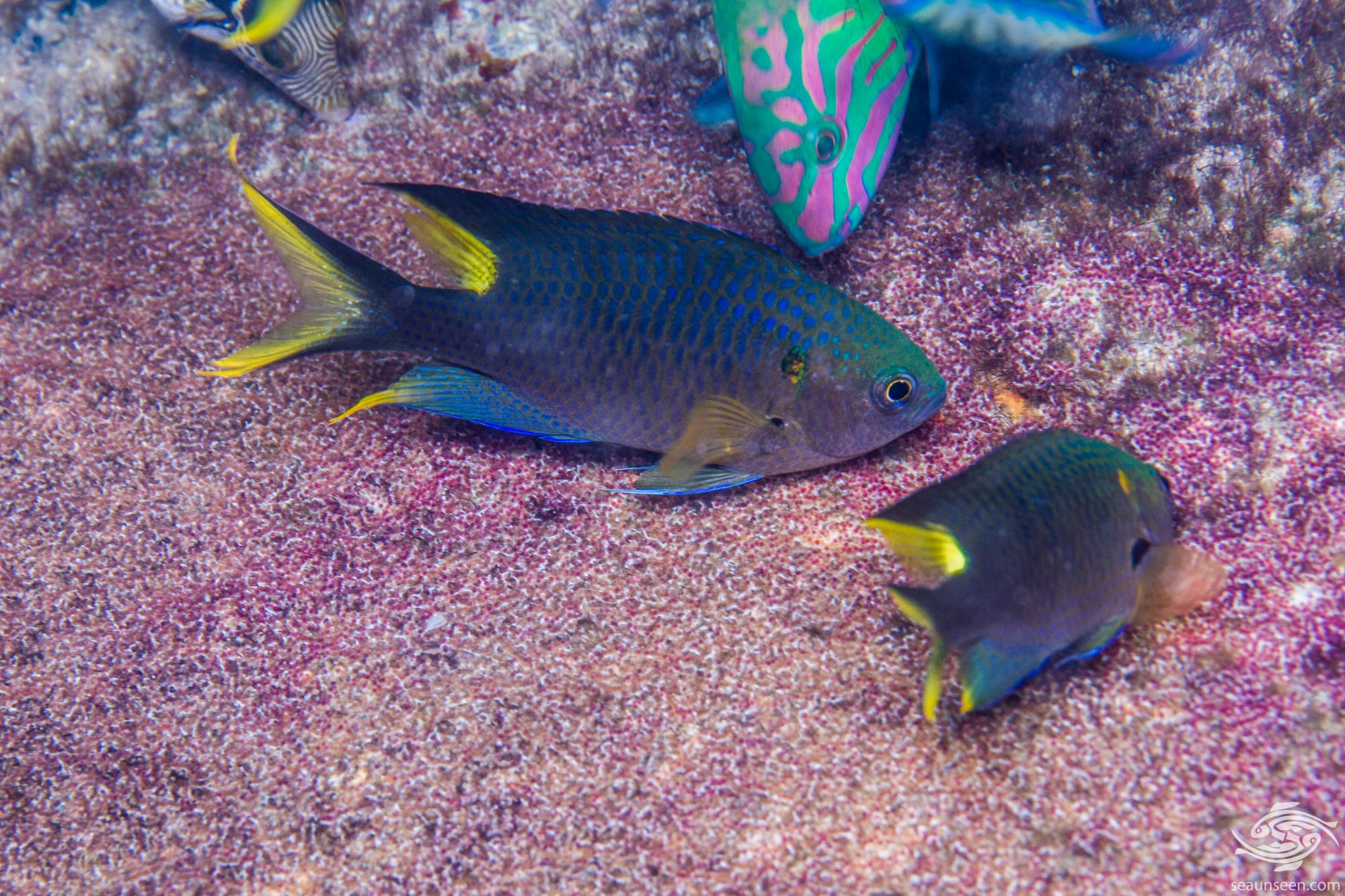 The Regal Demoiselle (Neopomacentrus cyanomos) is also known as the Regal Damselfish and the Cresecent Damselfish. They are found in very few locations in Tanzanian waters but where they are found there tend to be quite a few of them.

The Regal Demoiselle is a deceptive looking fish. When viewed on the reef they appear to be a blackish grey colour but as can be seen in the images wit the light of a strobe on them they are fairly colorful. As can be seen in the images, the upper body and head have a greenish tint to them. The lower body has a greyish tint and the scales on the body have a blue mark on them. 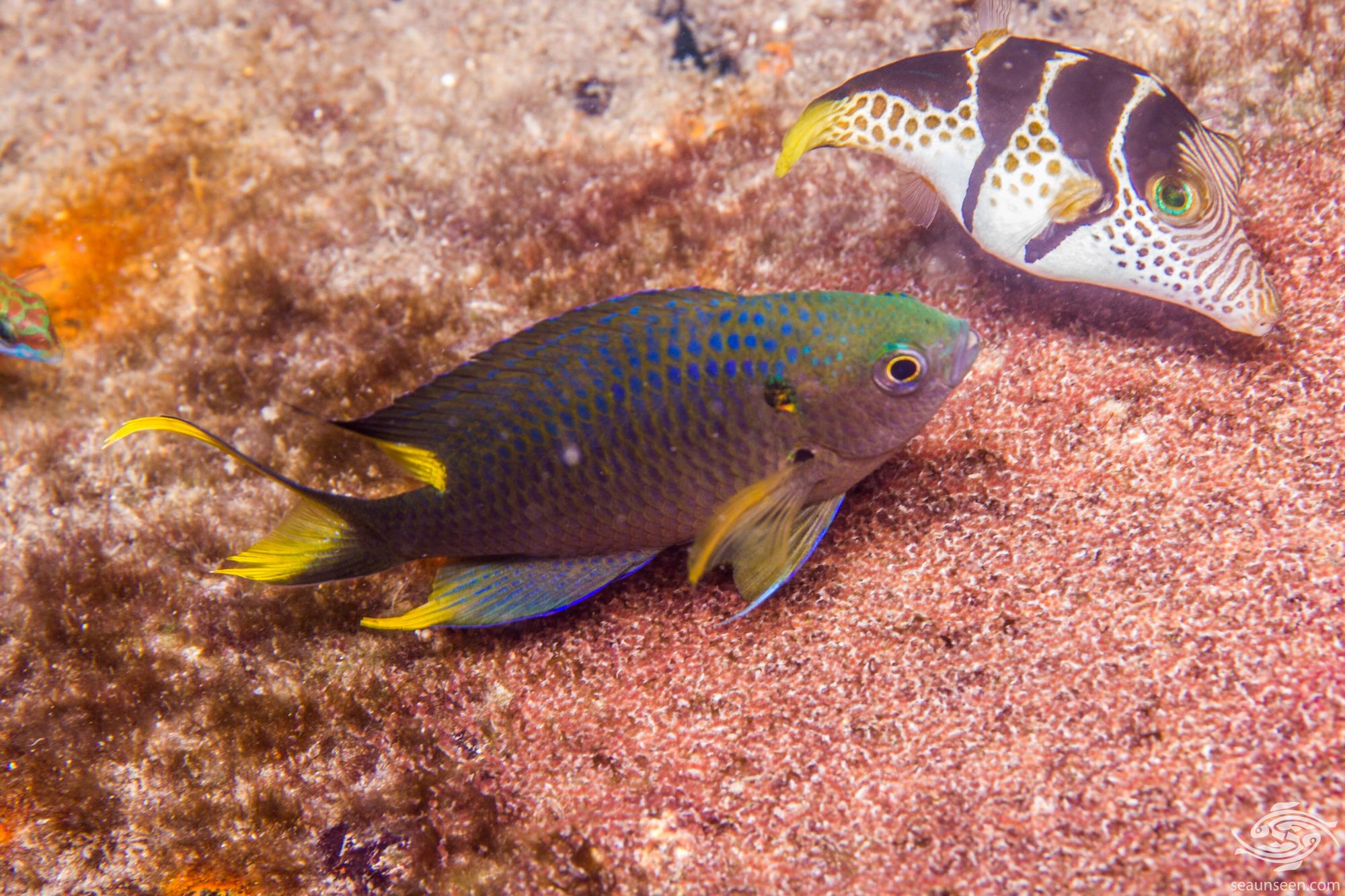 REGAL DAMSELFISH IN THE WILD

Regal Demoiselle are only found in some areas so they are far from common, but when they are found they tend to be in substantial numbers.  They usually shoal at around 3 to 6 meters and stay close to shelter. The juveniles shoal in numbers and the adults are usually in a loose shoal which breaks upevery now and again. 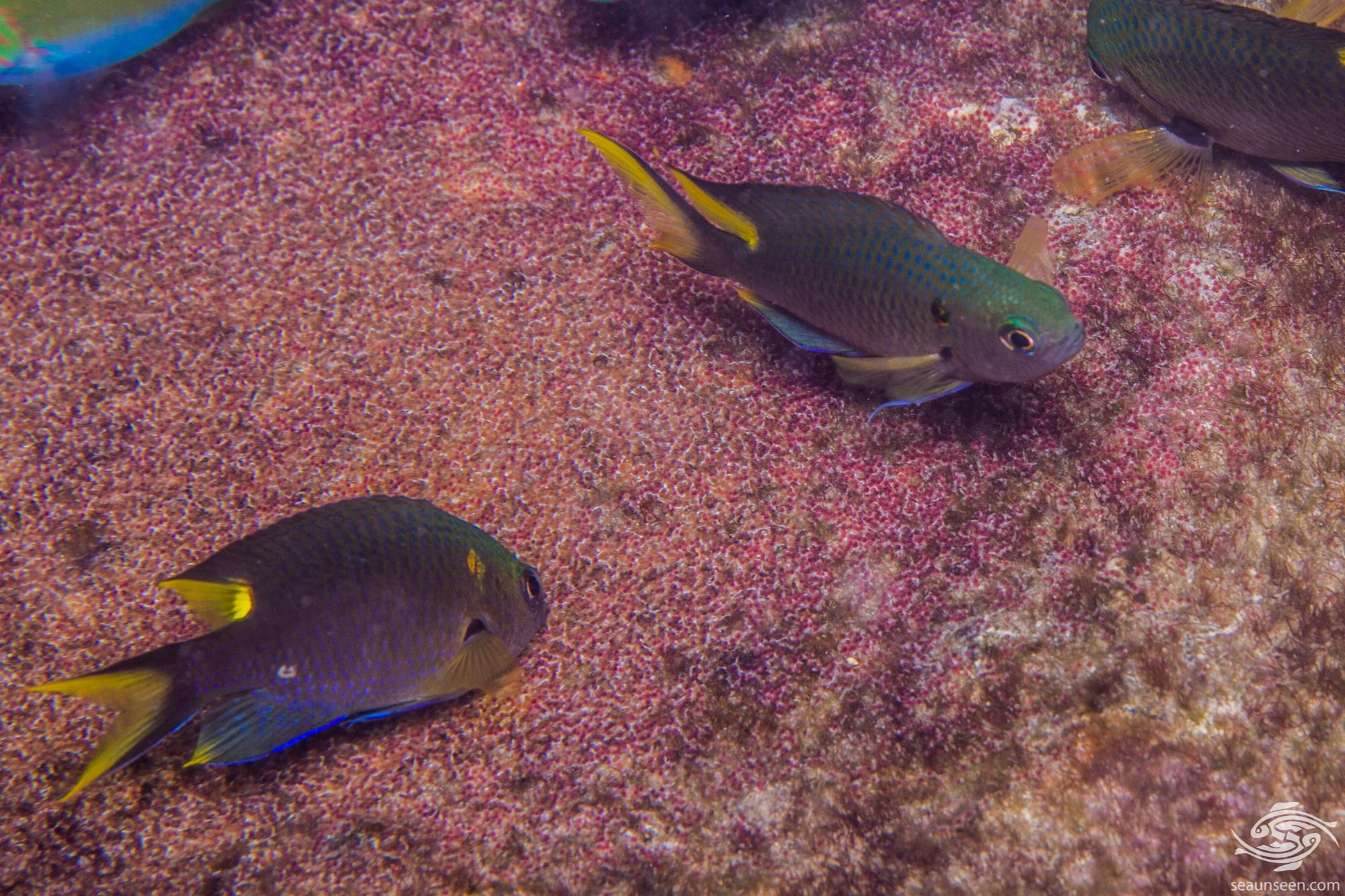 The Regal Demoiselle is found across the Indo West Pacific area from East Africa down to South Africa, across to Australia and north to Southern Japan. They have also been found in the Gulf of Mexico, doubtless as a result of being released by an aquarist. They are now spreading and may be classified as invasive in the near future. 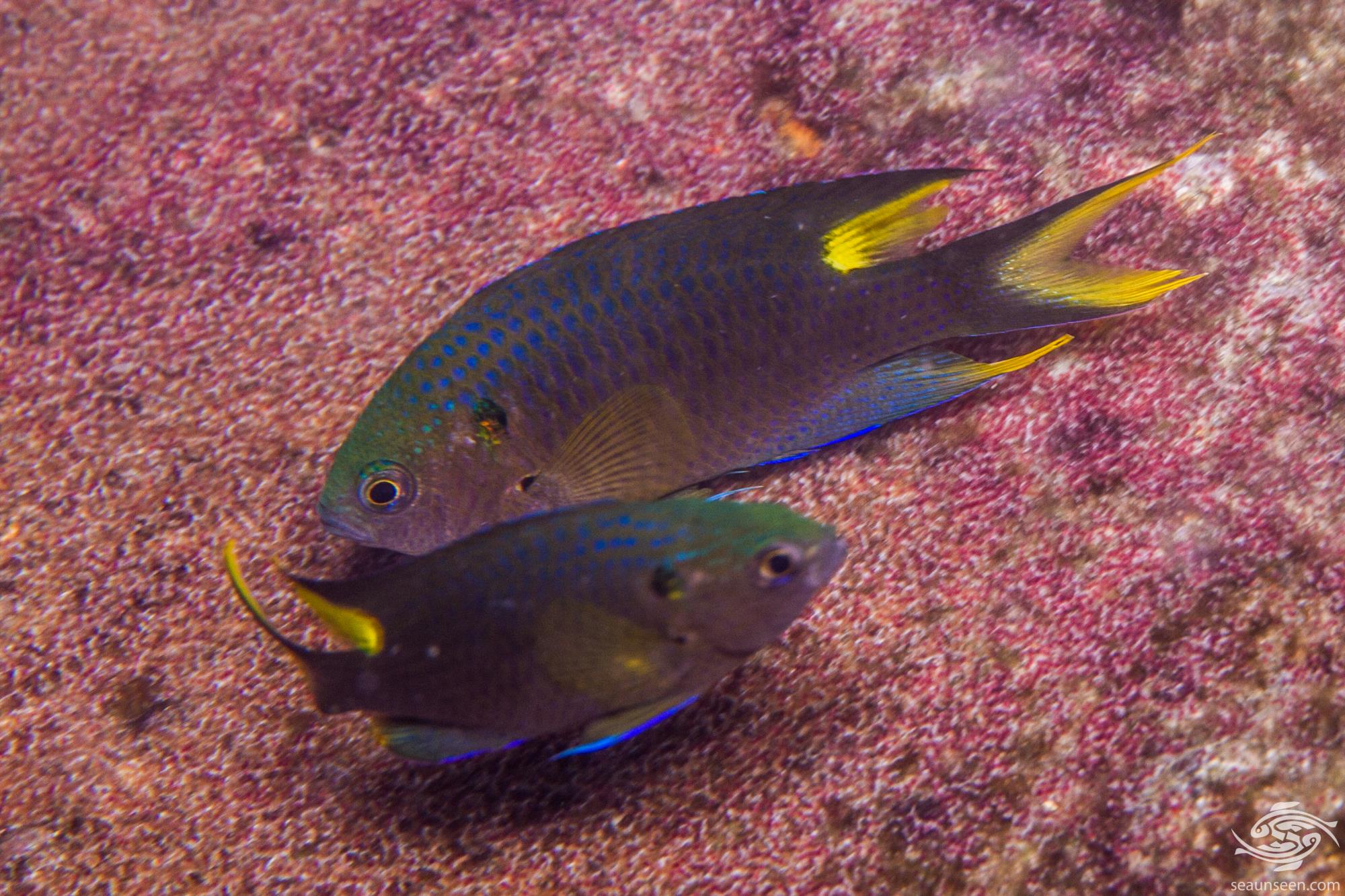 The Scaly chromis feed on zooplankton but as can be seen in the images they also feed off the substrate. 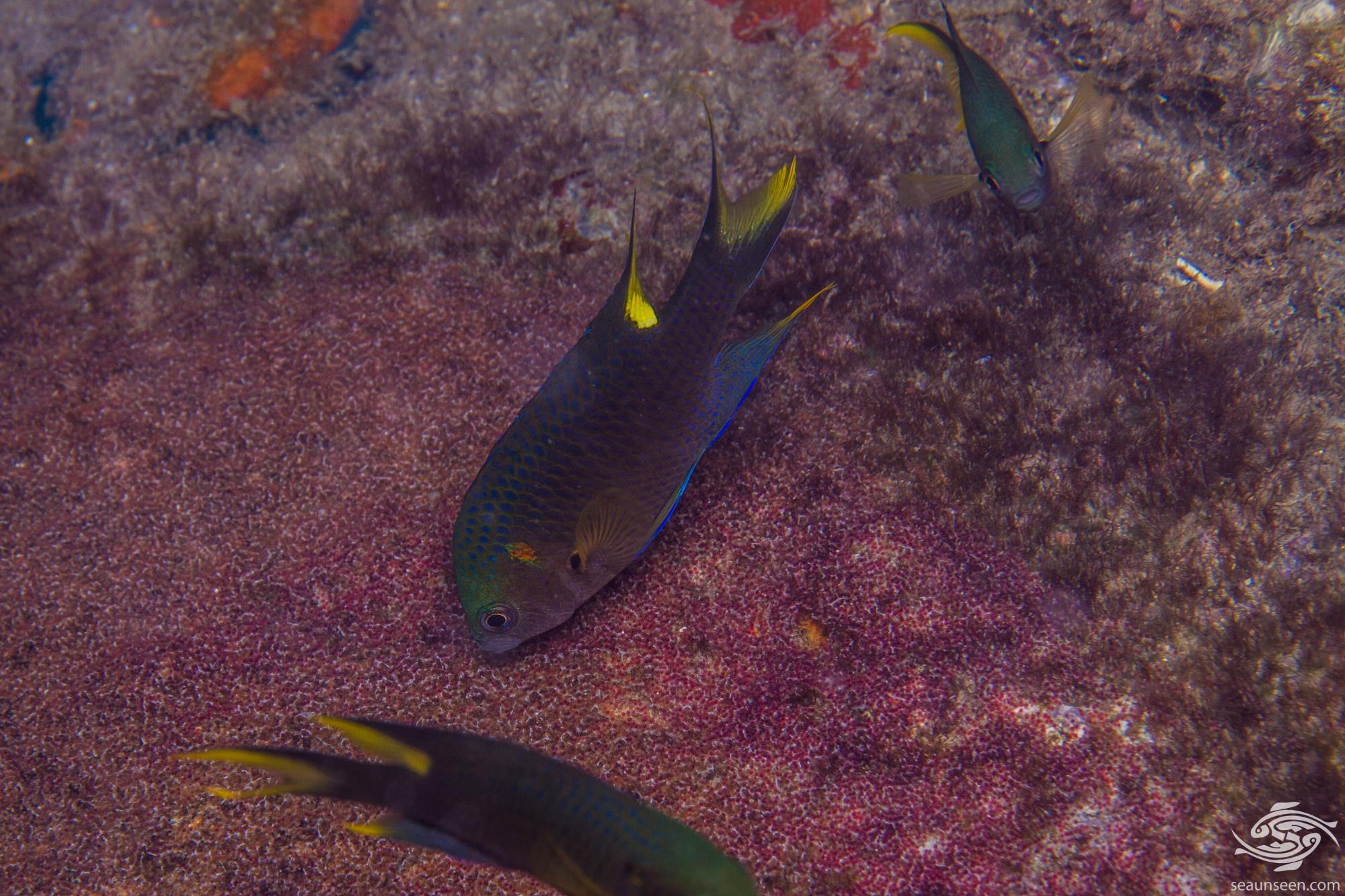 The Regal Demoiselle follow the normal Damselfish behavior. Pairing before mating is usual and after the male cleans a patch for the eggs, mating takes place. The eggs are demersal and adhere to the substrate. The males guard and aerate the eggs until they hatch. 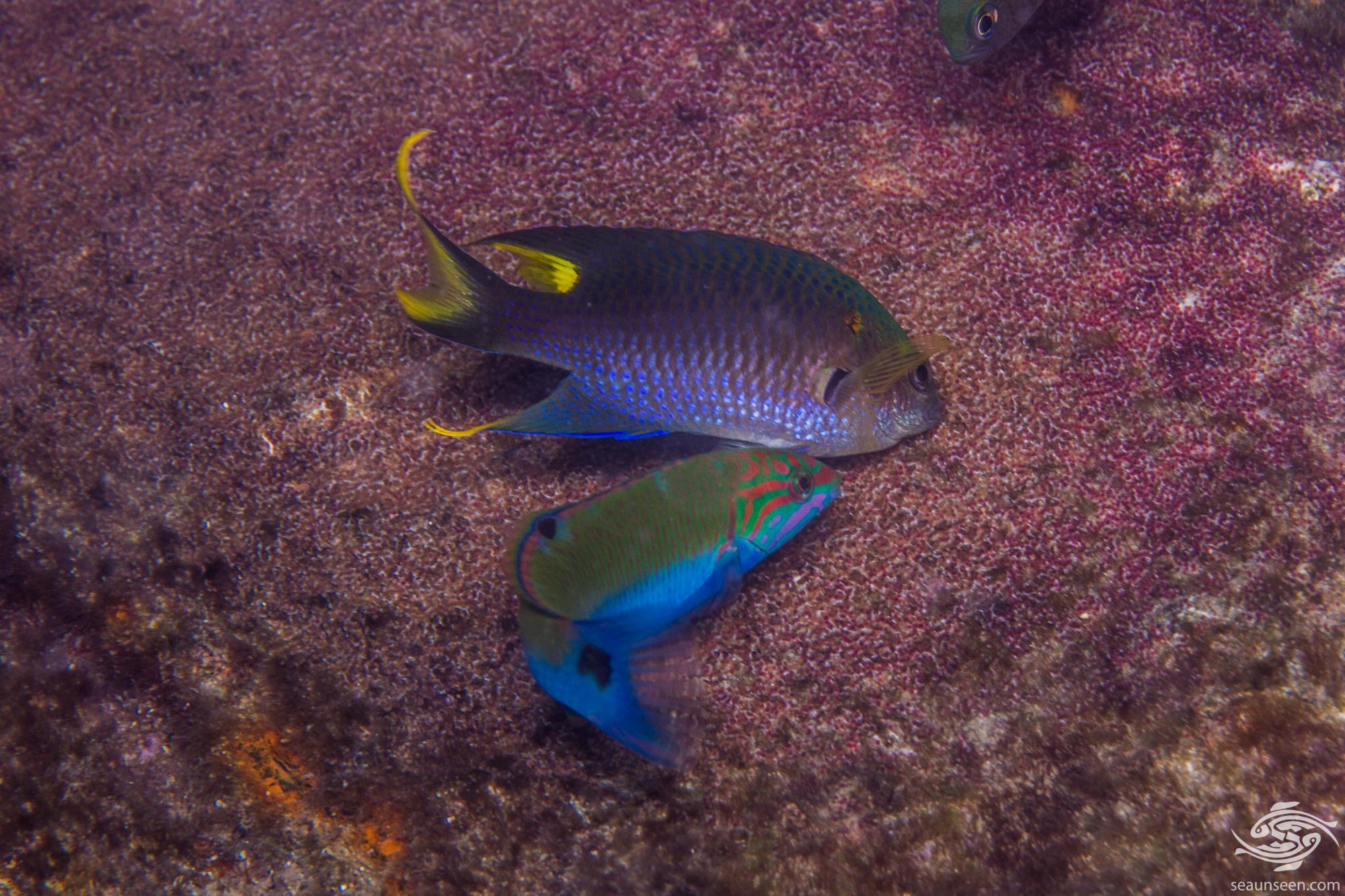 Regal Demoiselle are hardy fish and are easy to keep in an aquarium. They will also shoalmaking them an attractive feature.  However they will undoubtedly become territorial as adults, perhaps not as bad as other Damselfish, but nevertheless can be a problem. There is a good chance that they will harass and beat up more peaceful fish. They are bred in captivity and one should always try and buy captive bred fish.  Not only are they used to a tank, but buying captive bred fish reduces pressure on the wild populations. 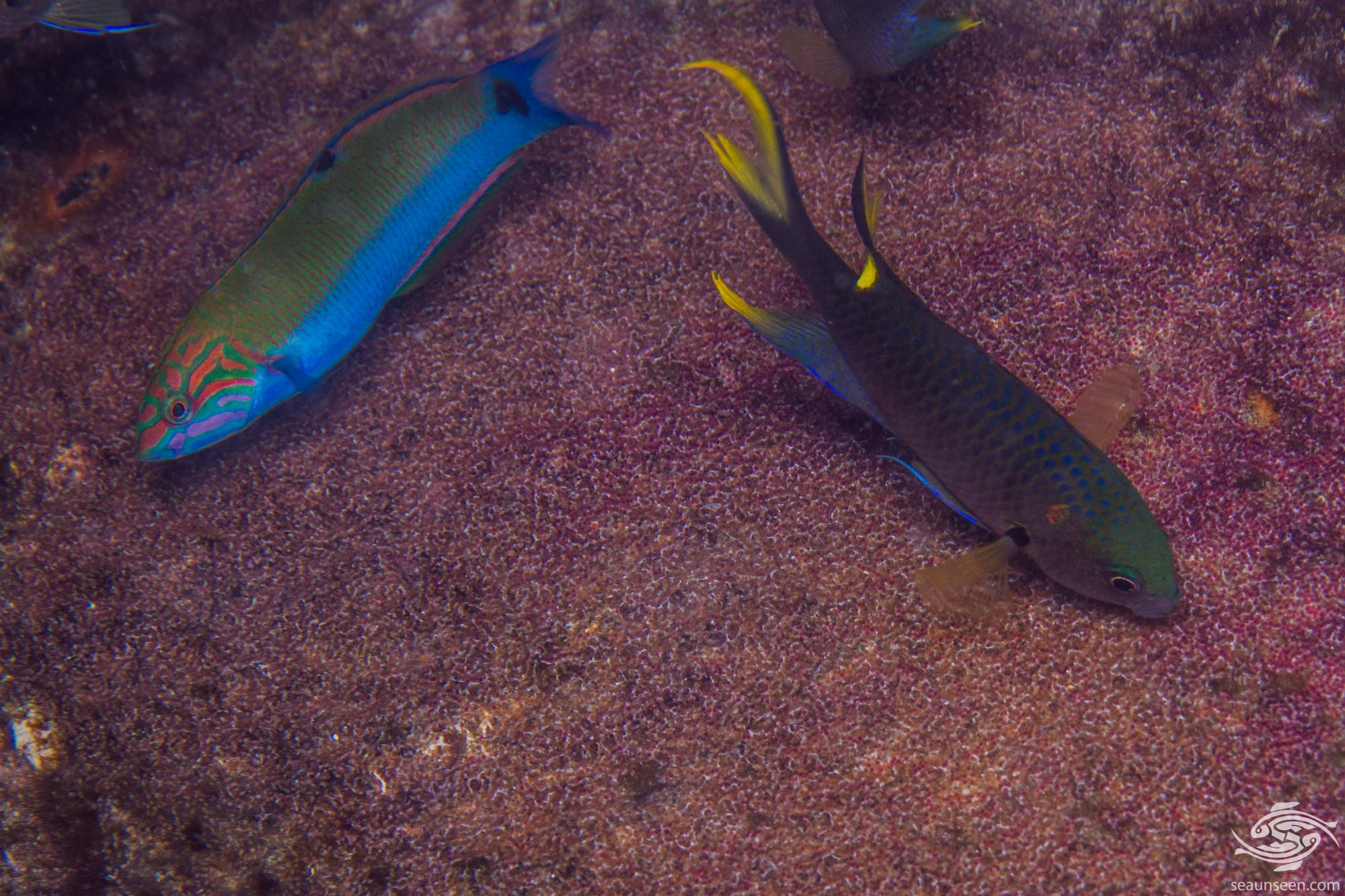