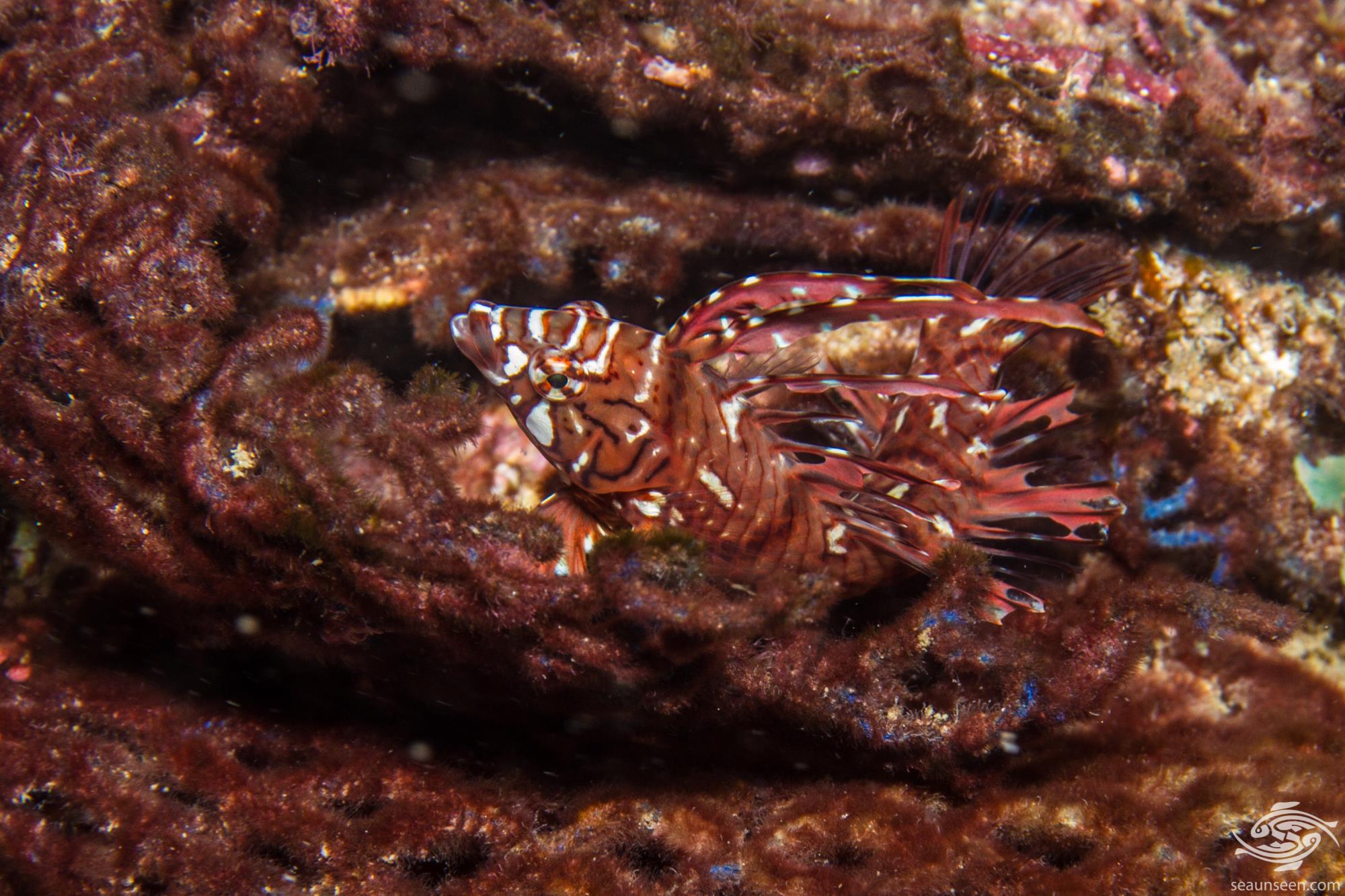 The Rockmover Wrasse (Novaculichthys taeniourus) is also known as the Dragon Wrasse, Reindeer Wrasse,Masked Wrasse and Olive-scribbled Wrasse. The juveniles are known Leaf Wrasse in some areas. They are not a very common wrasse on Tanzanian reefs but neither are they uncommon. They are fairly shy compared to most other wrasses and the adults tend to keep their distance from divers.

They are the only species in their genus. As their name suggest they often turn over debris on the substrate to expose prey hiding beneath the rocks although they do not actually turn rocks over. Their  colouration and shape changes dramatically as they age from a juvenile pictured above into an adult pictured below. 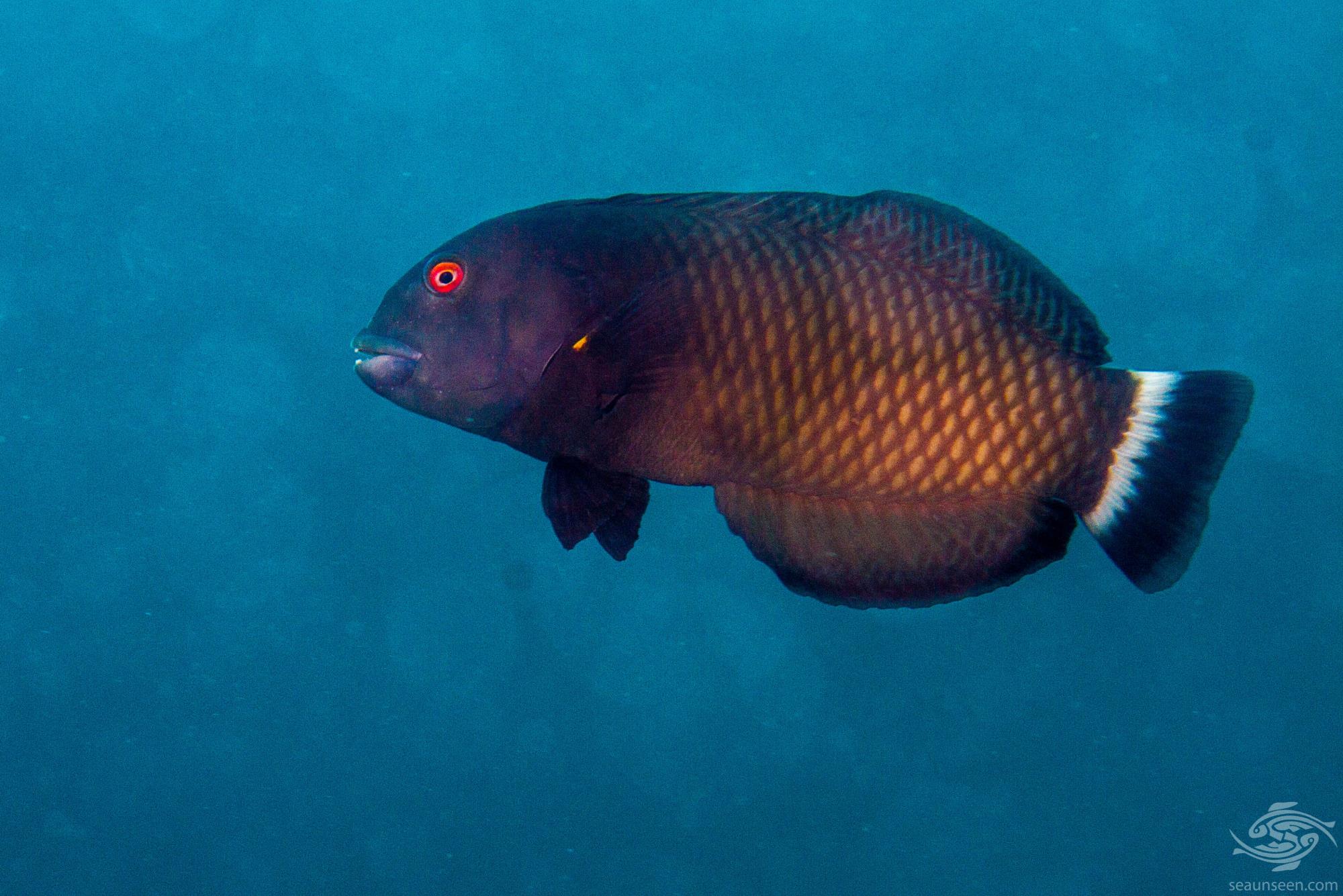 The small juveniles pictured Rockmover Wrasse below have a red brown colored body with broken horizontal white bars running across the body. The rays of the fins are lengthened and the front dorsal spines are highly elongated. There are vertical white lines on the face. At this stage in Kwa Zulu Natal they are known as Leaf Wrasse. 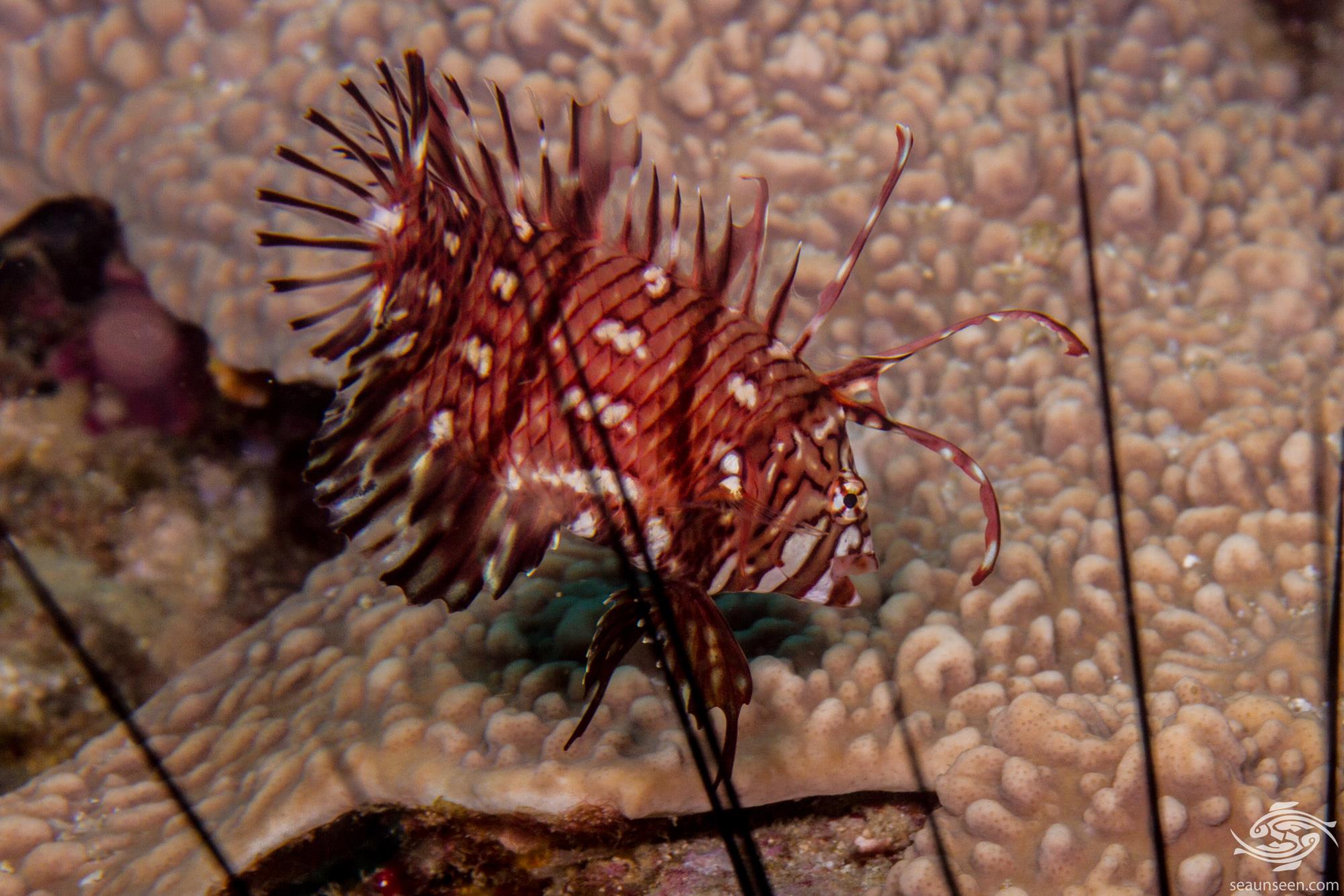 In the next stage the body turns a dark brown to black color and on a proportional basis the fin extensions are not as long as in the juvenile. The first two dorsal spines remain elongated. 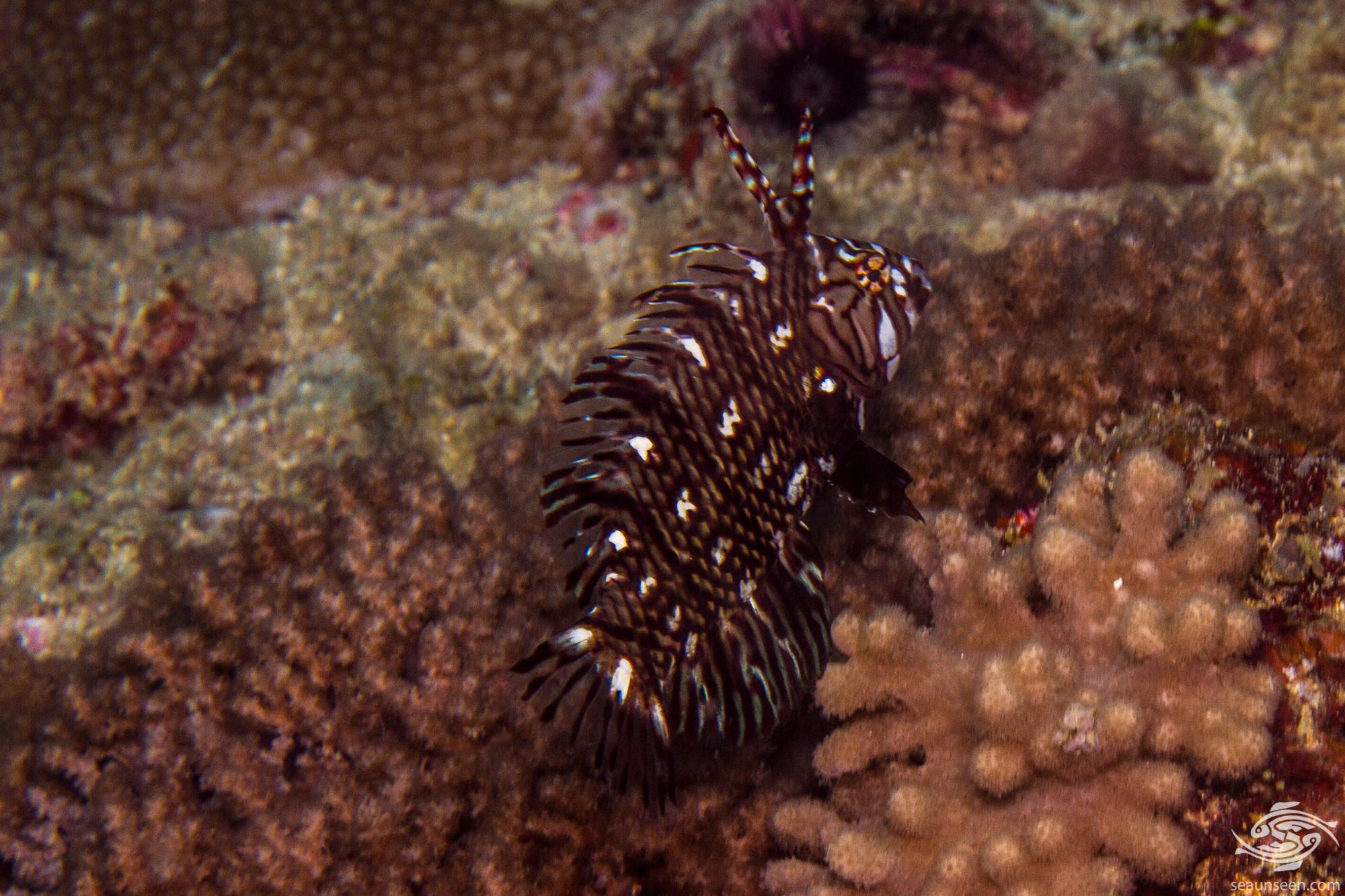 As the fish ages into an adult so the extended fin rays disappear. 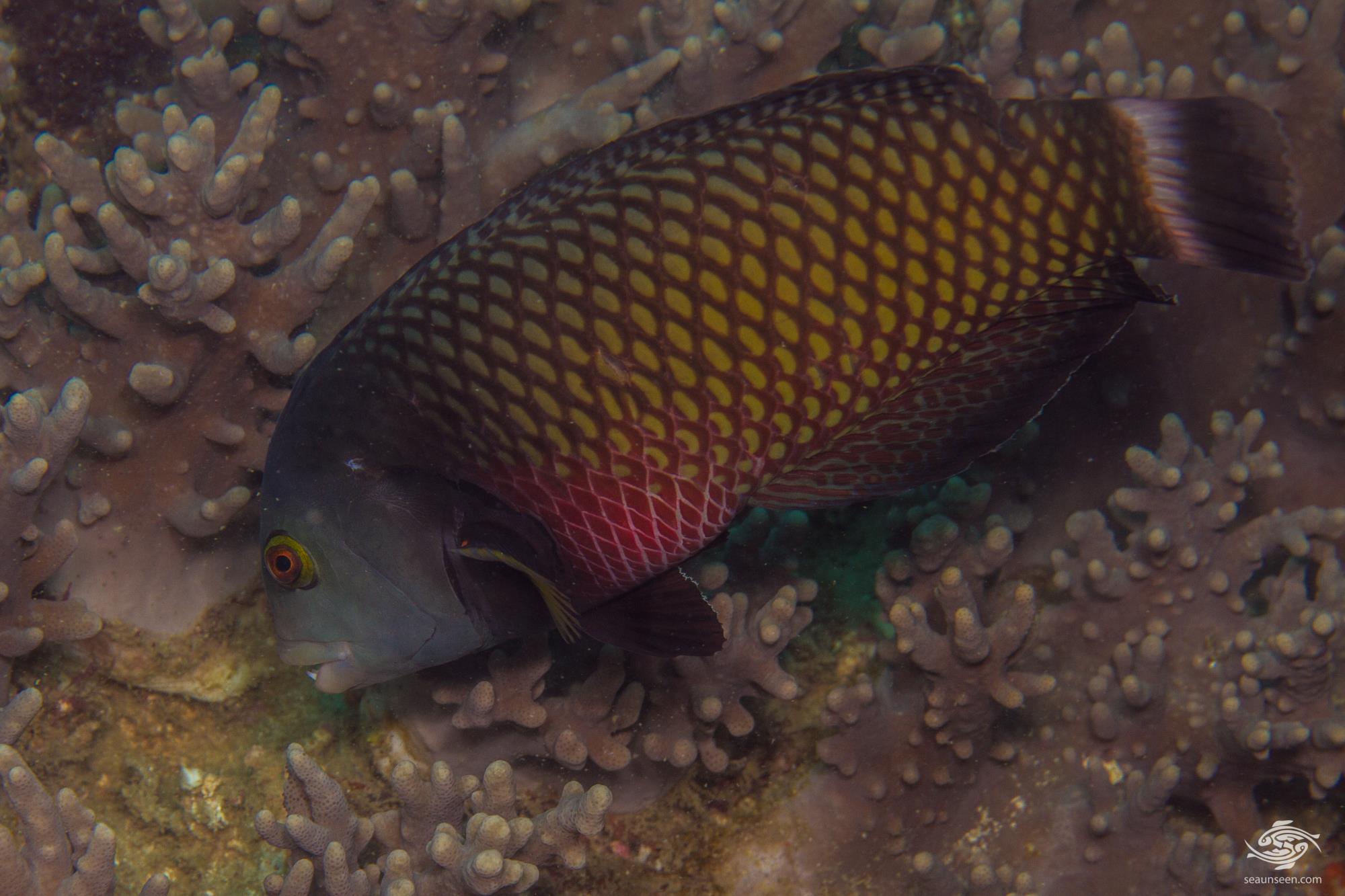 The head area becomes a uniform dark grey colour with a darker black patch around the gill area. The rear body has light brown yellow scales edged in dark grey which creates a cross hatched pattern across the body. The caudal fin has a white bar on it with the rear being black. 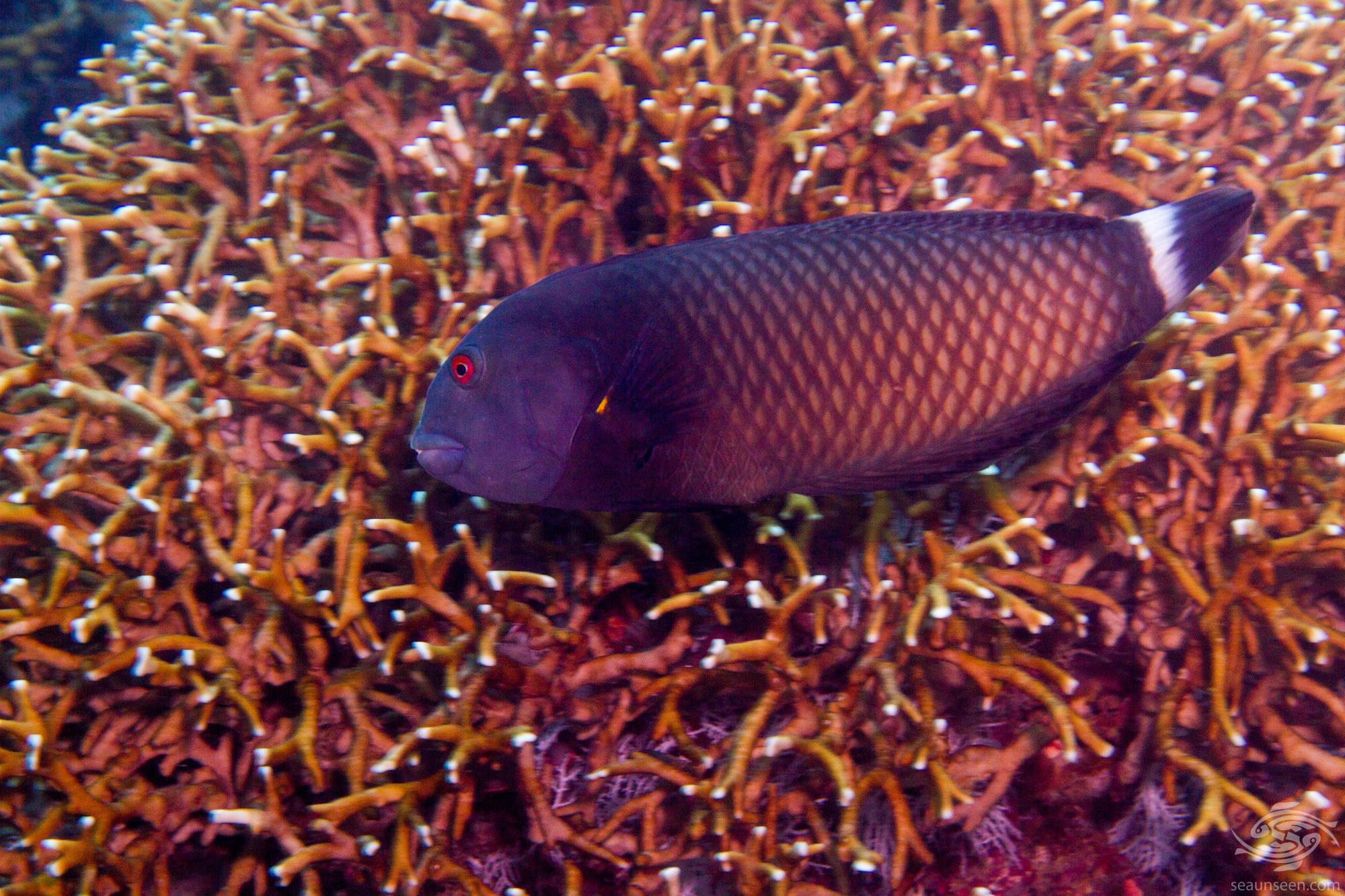 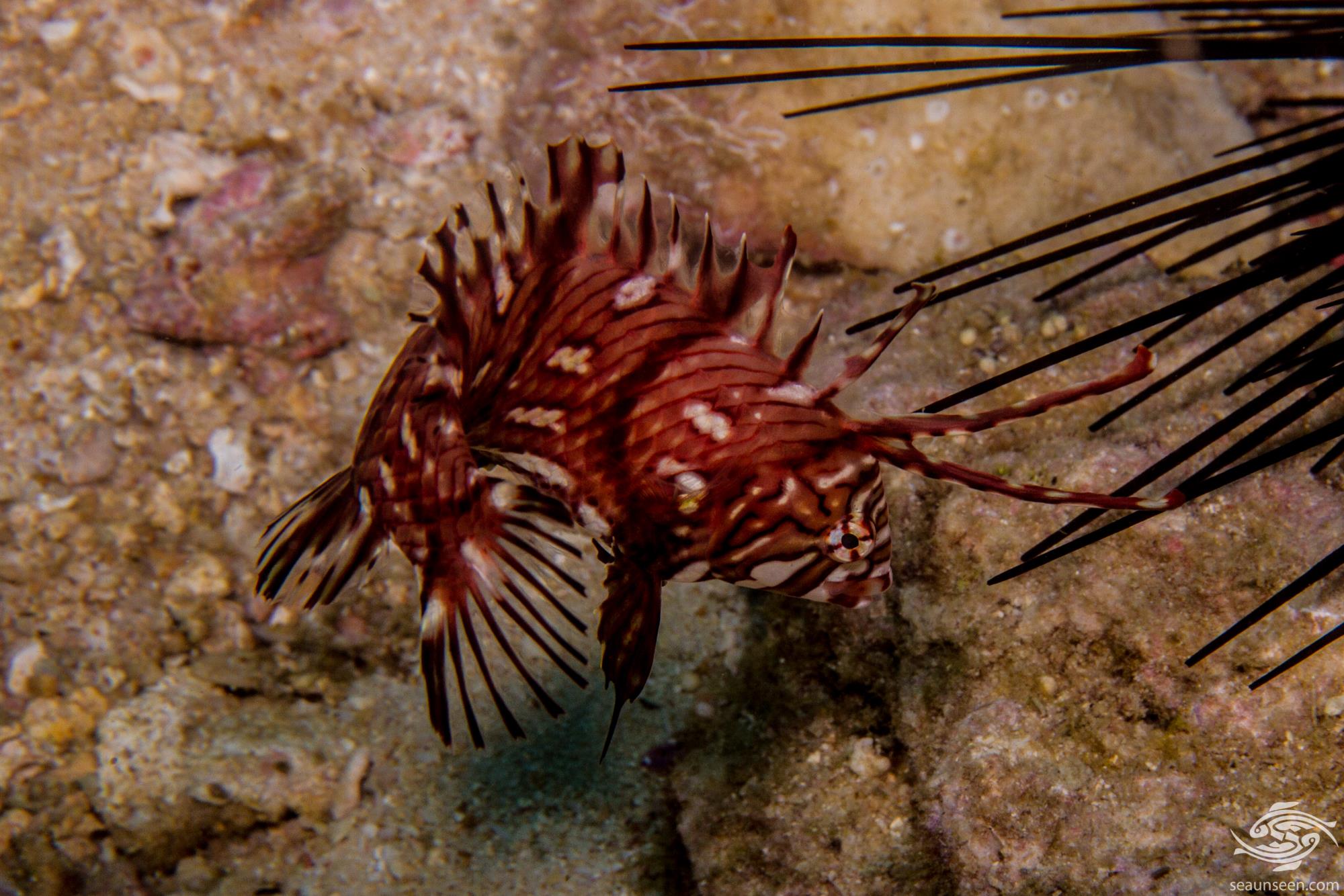 ROCKMOVER WRASSE IN THE WILD

The juveniles are usually seen low on the water table just above the substrate usually in mixed rubble and coral areas.  Their swimming pattern resembles that of a leaf being tumbled through the water and they twist and turn as they move. If one follows them for long enough they sometimes sit on the bottom and hide as in the header image in the post but more commonly they will dive into sand if it is available. As they become larger they begin swimming the reef on their own and adopt a more normal swimming pattern. The larger adults are as a rule seen in pairs feeding together with one fish moving debris on the bottom while the other grabs the exposed prey. They seem to prefer areas with mixed coral and rubble. The adults are fairly wary of divers and often remain just on the periphery of the visibility. 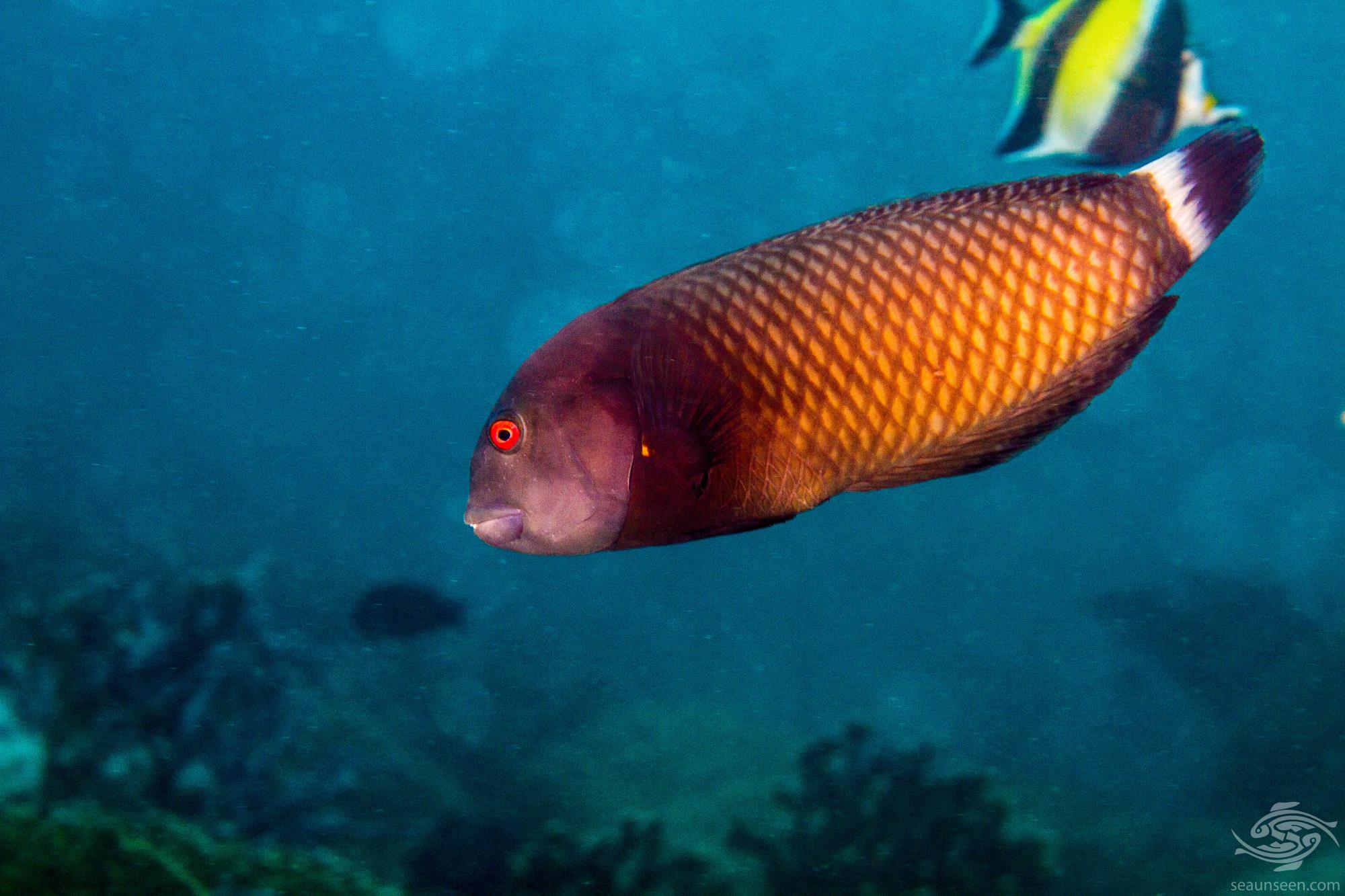 The Rockmover Wrasse is found across the Indo Pacific area  from the Red Sea down to South Africa and across to Japan in the north, south to Australia and the Great Barrier Reef and east to the Gulf of California, Panama  and the Galapagos excluding the Persian Gulf.  Their depth ranges from 3 to 25 meters but in Tanzania the adults are more common from 10 meters downwards. They mainly stick fairly close to the bottom and it is not often that they are seen swimming more than a meter or two above the substrate. 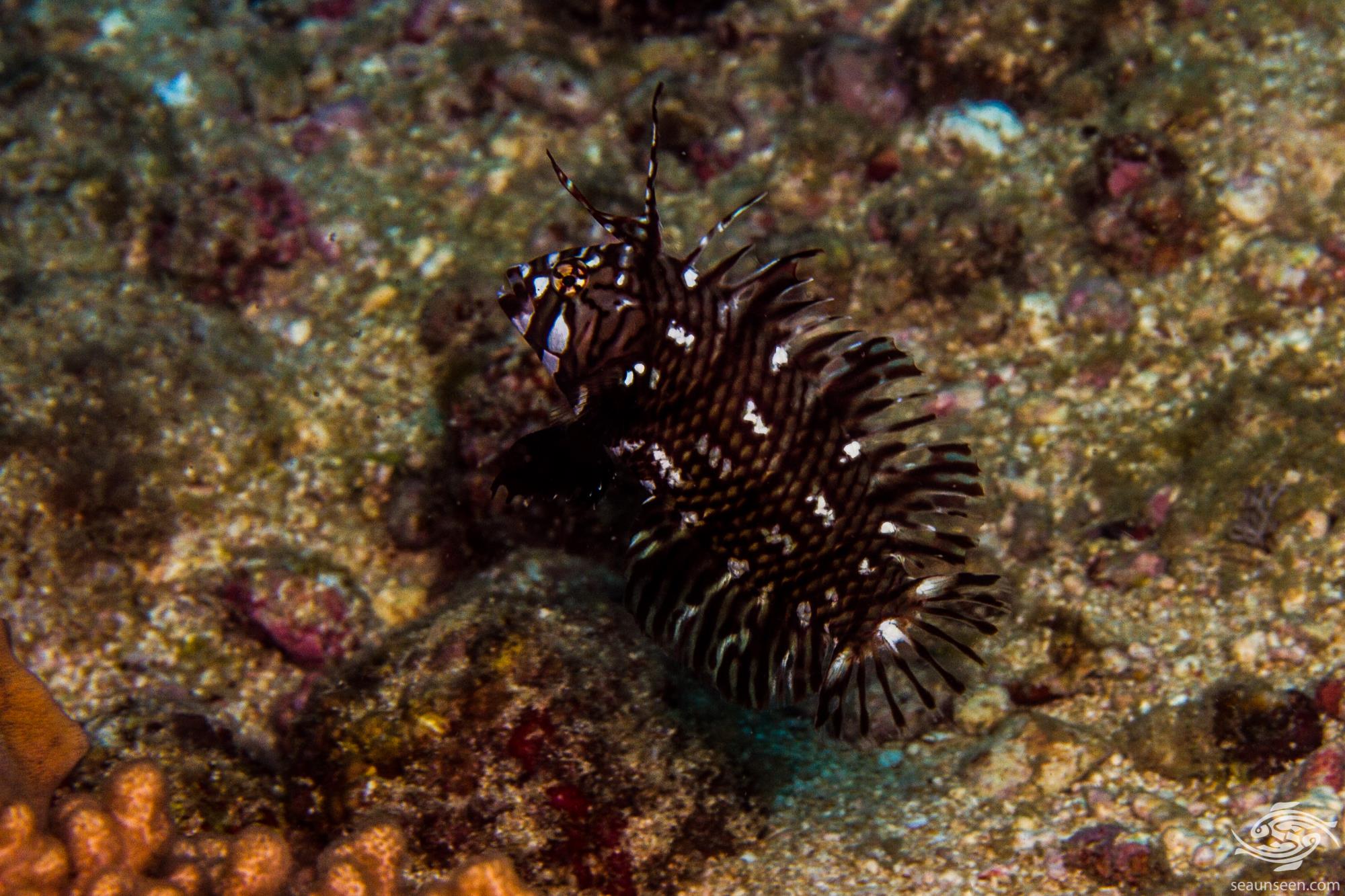 The Rockmover Wrasse feeds on small crustaceans, molluscs and brittle stars and urchins. They obtain their name from their habit of shifting rubble and debris on the bottom, usually by pushing it with their nose but sometimes by grabbing it with their mouth.  Often they work in pairs with one moving the debris and the other catching the prey. 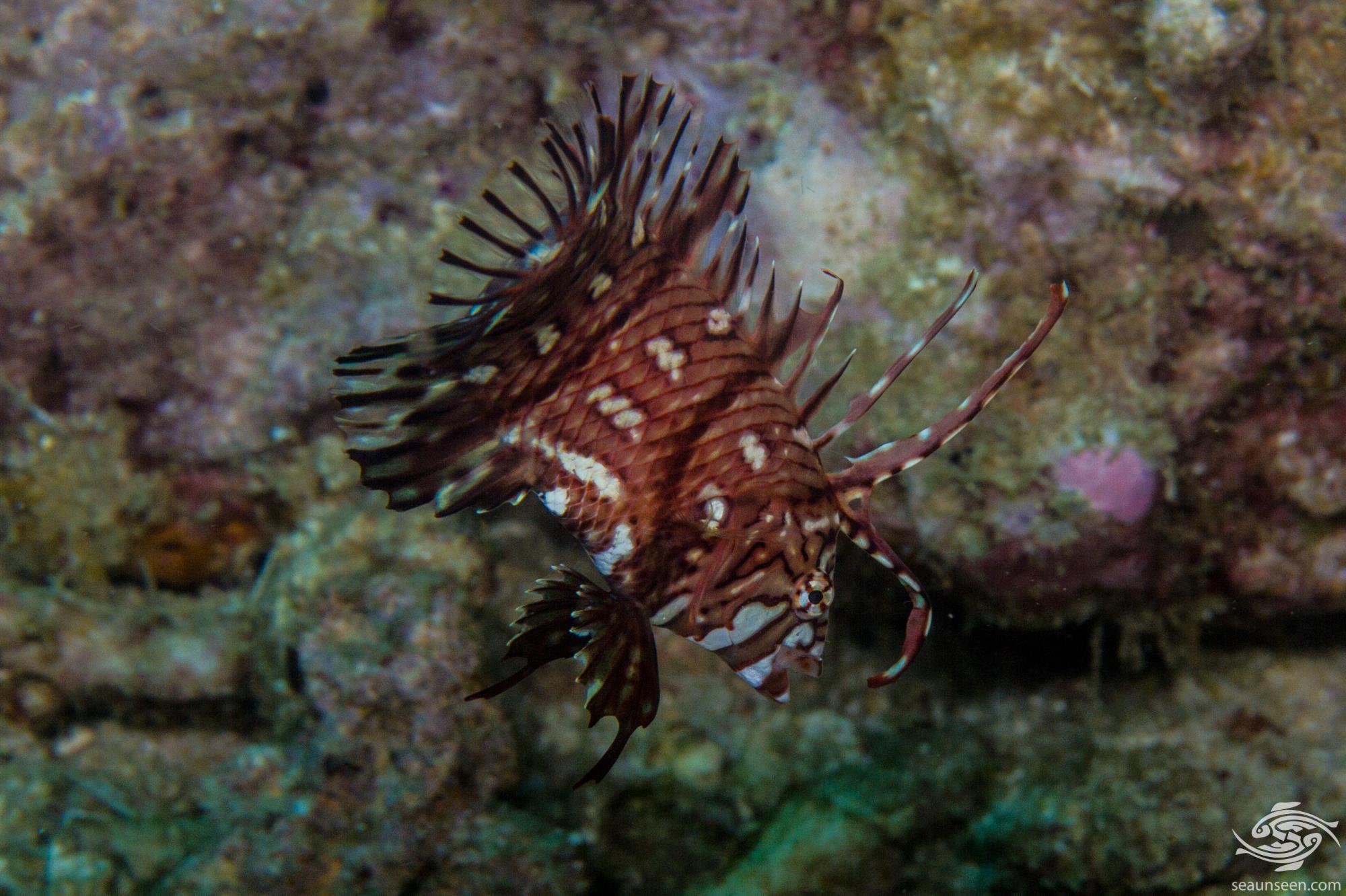 The Rockmover Wrasse is a Protogynous hermaphrodite. They first develop into females. As they age so some specimens based mainly on social cues transform into males. Little is known of their breeding habits but they are said to spawn in pairs. 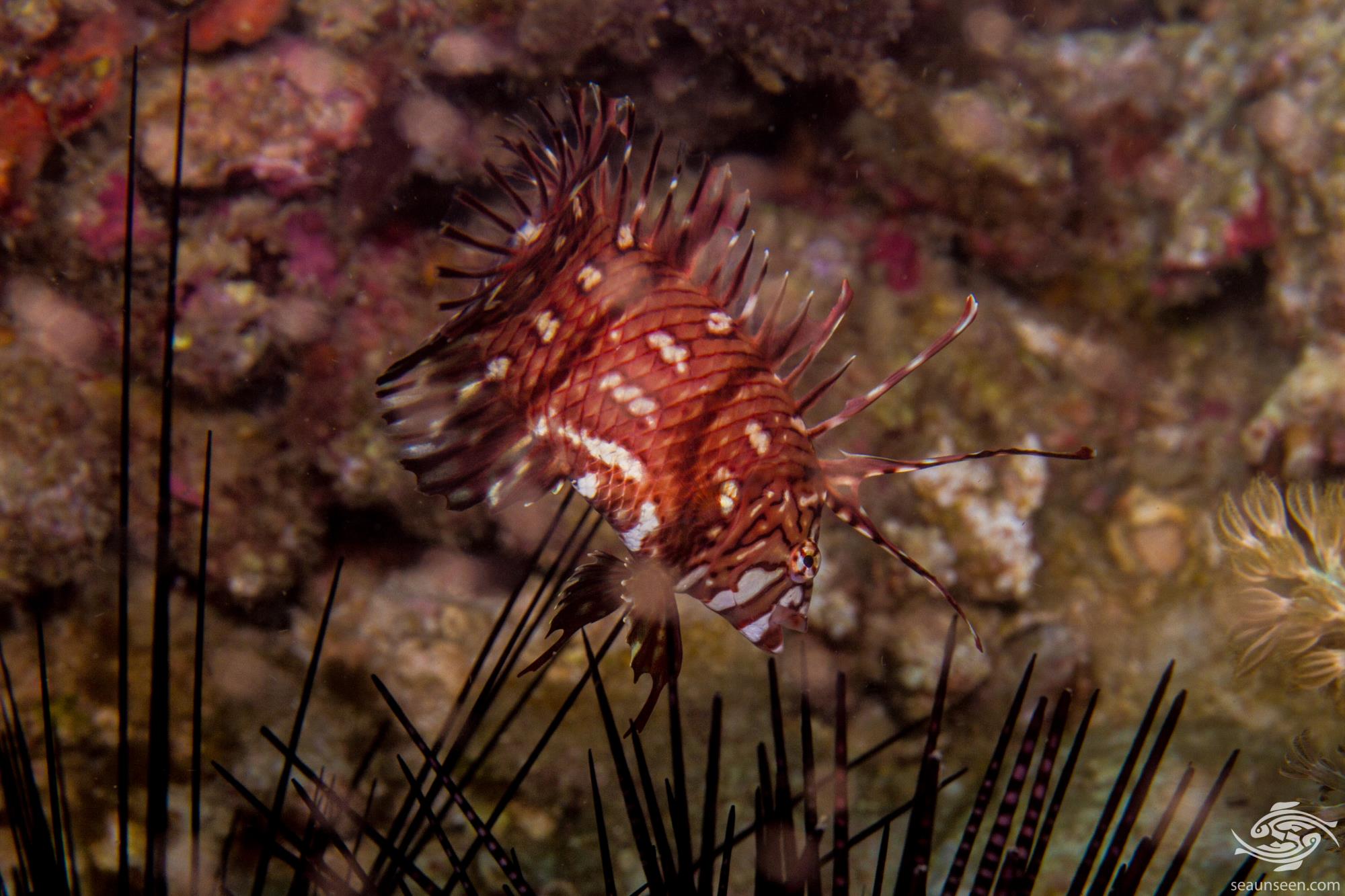 Rockmover Wrasse juveniles are sometimes kept in aquariums and are easy to feed and care for but given the size of the adults a large tank is a pre requisite.  These fish as adults are really only suitable for very large fish only aquariums. They are not suitable for reef tanks and may become aggressive to more peaceful species. They require a thick layer of sand to dig into and will jump. 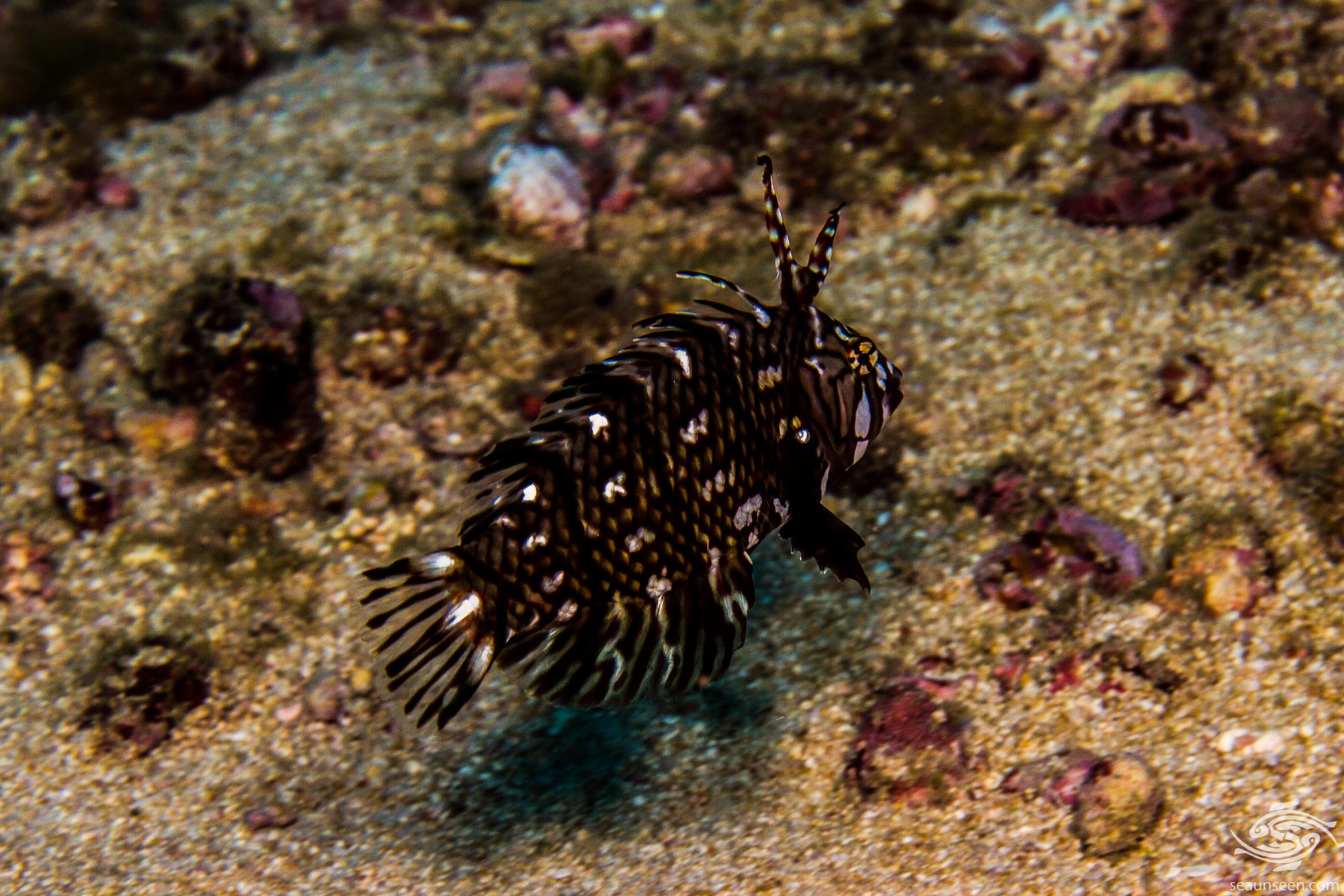