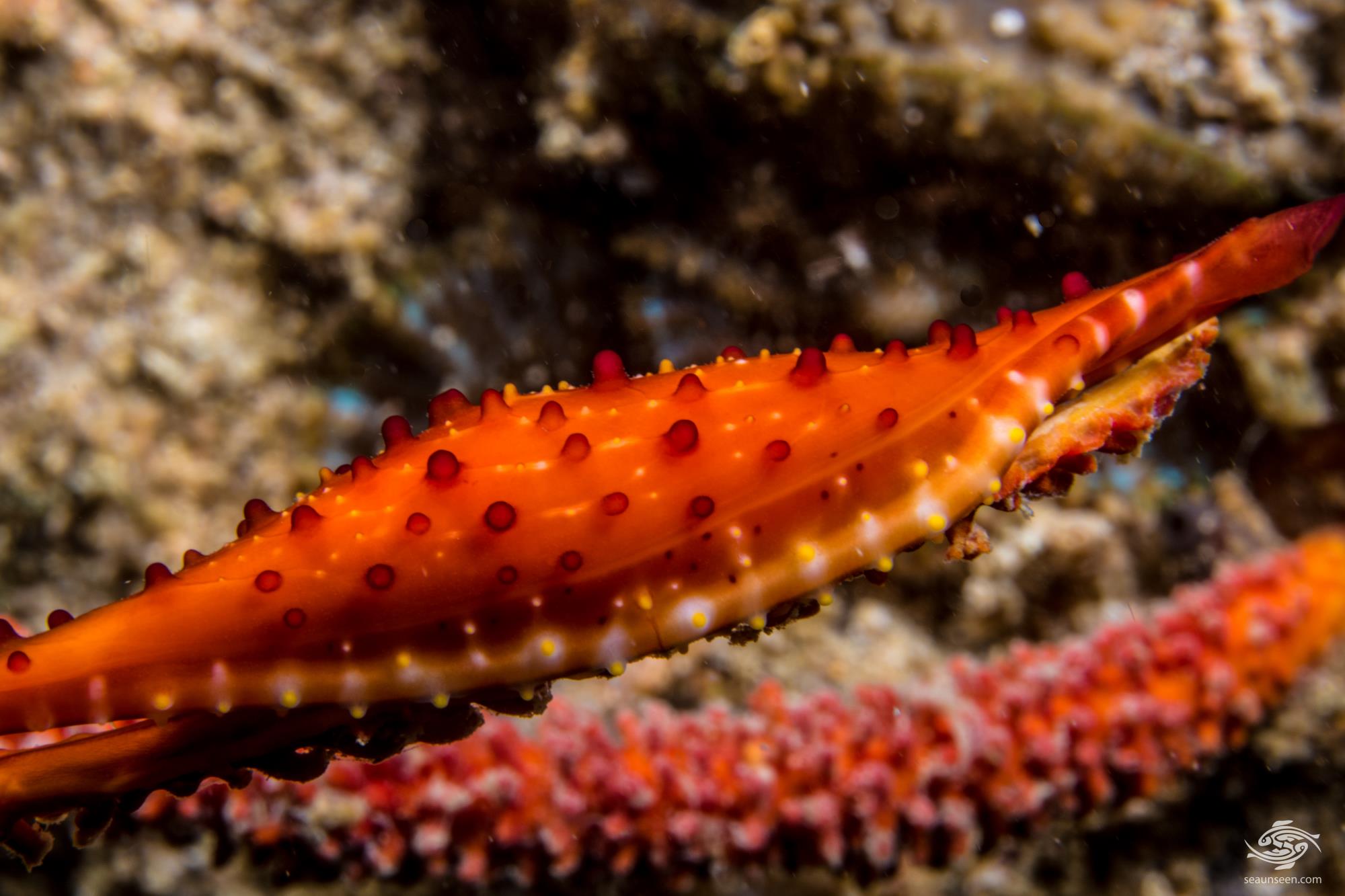 The Rosy Spindle Cowrie (Phenacovolva rosea) is also known by other local names as the Many Host Phenacovolva, the Double-snouted Spindle Cowrie, Tokio’s Volva and the Gorgonian Spindle Cowry. They are not a true cowries , instead they are in the Ovulidae family also known as False Cowries or Cowry Allies.

These are predatory or parasitic marine gatropod molluscs in the same super family Cypraeodea as the true cowries. Rosy Spindle Cowrie are often well camouflaged depending on which gorgonian host they are on and are not always that easy to spot. They prey on a variety of gorgonian hosts including fans, bushy and whip corals. They are nocturnal and during the day they roost , usually well hidden from view. 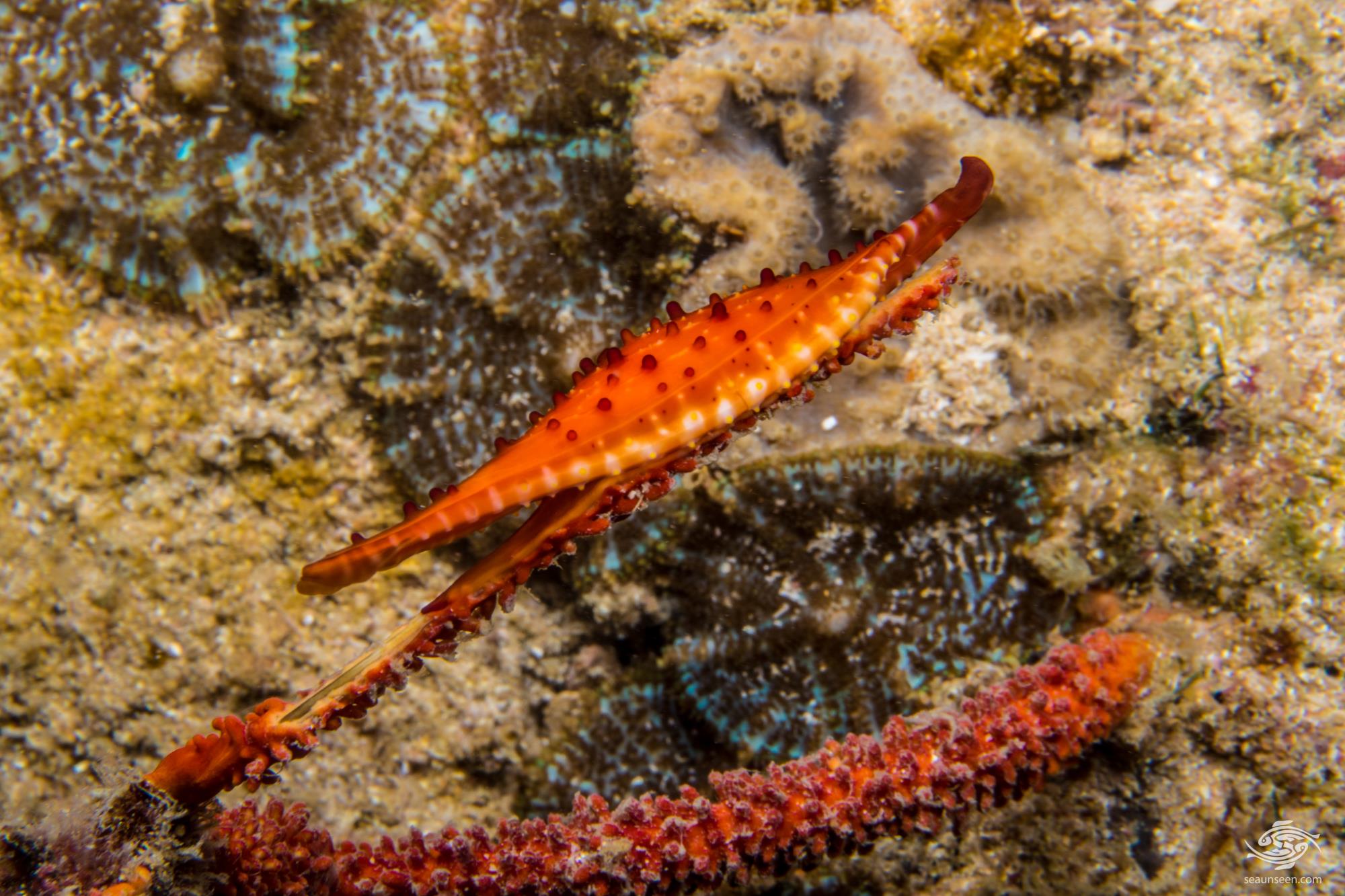 As their name Rosy Spindle Cowrie suggests, they have a proportionately long shell which is compressed. and because of the pointy ends they resemble a spindle, hence the name. The color of the exterior of the shell varies considerably but is usually orange with a white edge on the lip of the shell. The name Rosy is a bit of a misnomer although some specimens have a reddish tint on the ends.

The mantle is transparent allowing the shell color to show through. The mantle is covered in papillae of varying sizes with the larger ones being a dark brown and the smaller ones being white. Research indicates that the colors vary depending on which hosts the specimen is found on. They grow up to 6 cm in length.

The mollusk inhabits only the middle section of the shell and has a long siphon that extends up the front end of the shell. 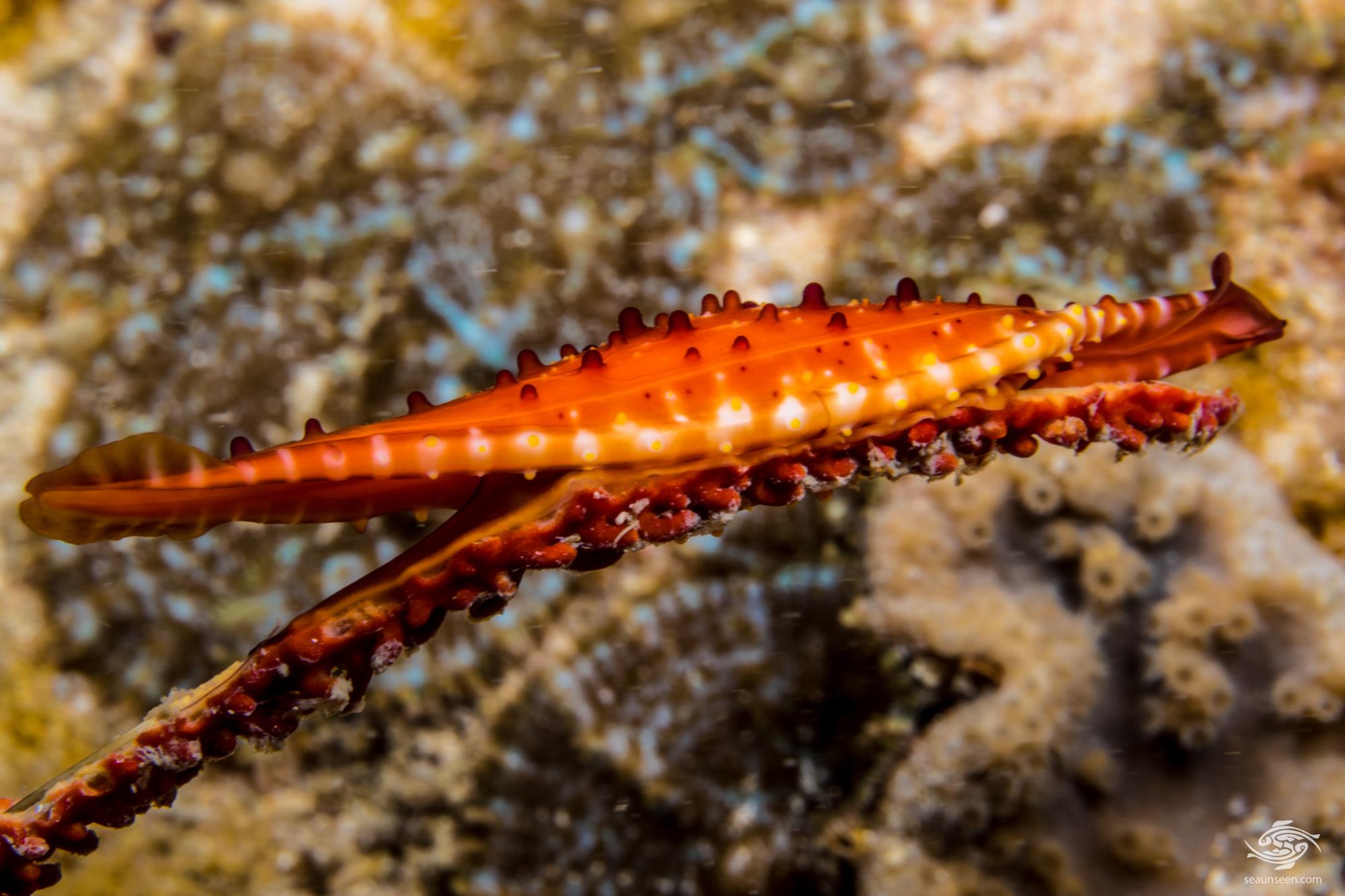 Rosy Spindle Cowrie are not that commonly seen in Tanzania and despite the fact that they have more of a multipurpose camouflage they are not always that easy to spot unless one is specifically looking for them.  They tend to eat their prey right down to the axis when feeding and if one searches for these white marks it can help in finding them. 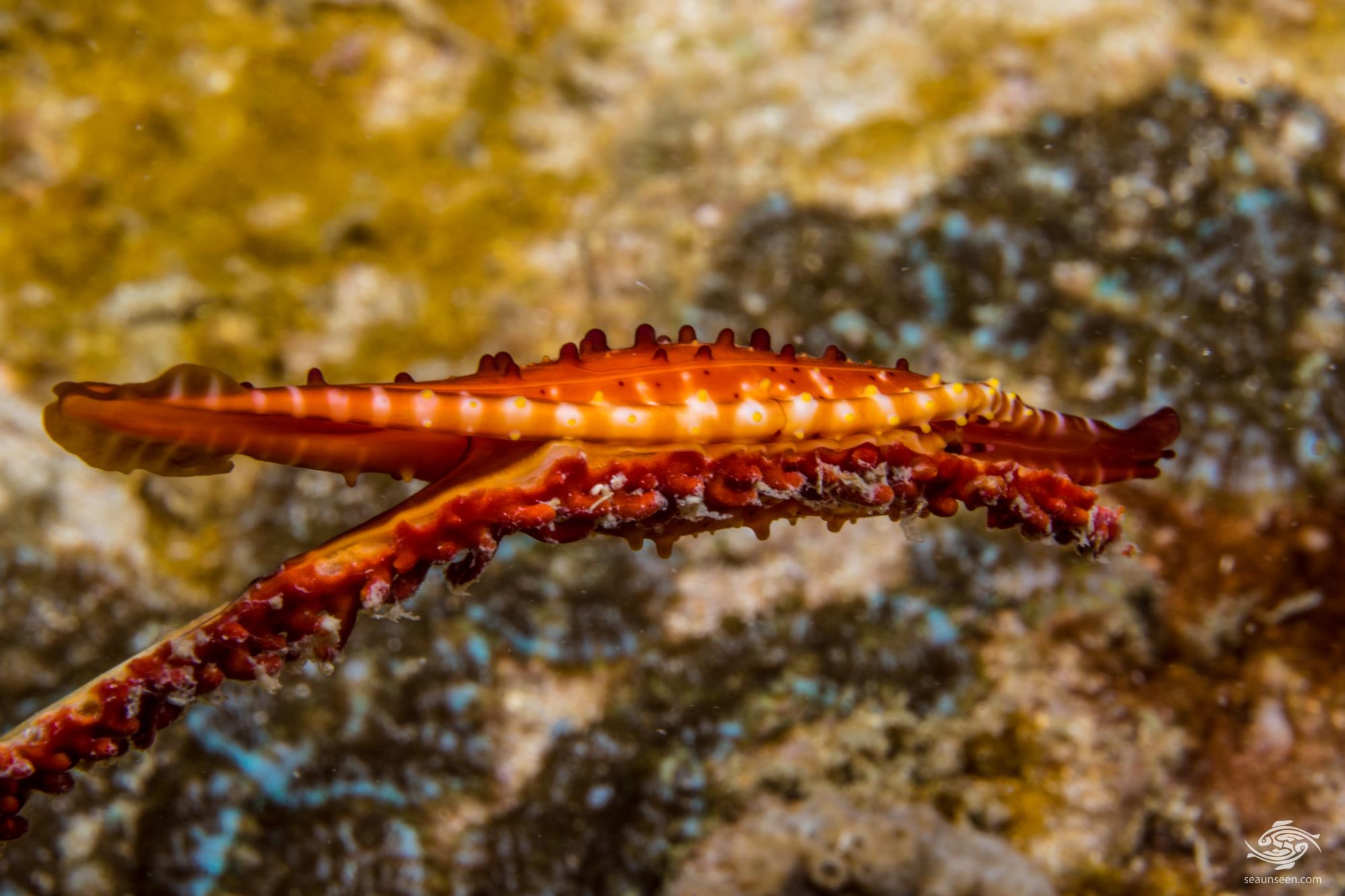 The Rosy Spindle Cowrie is found across the Indo-West Pacific region from East Africa to Australia and north to Japan, they are found  on numerous species of  gorgonian corals. They have been found from 10 meters down to 250 meters in depth. 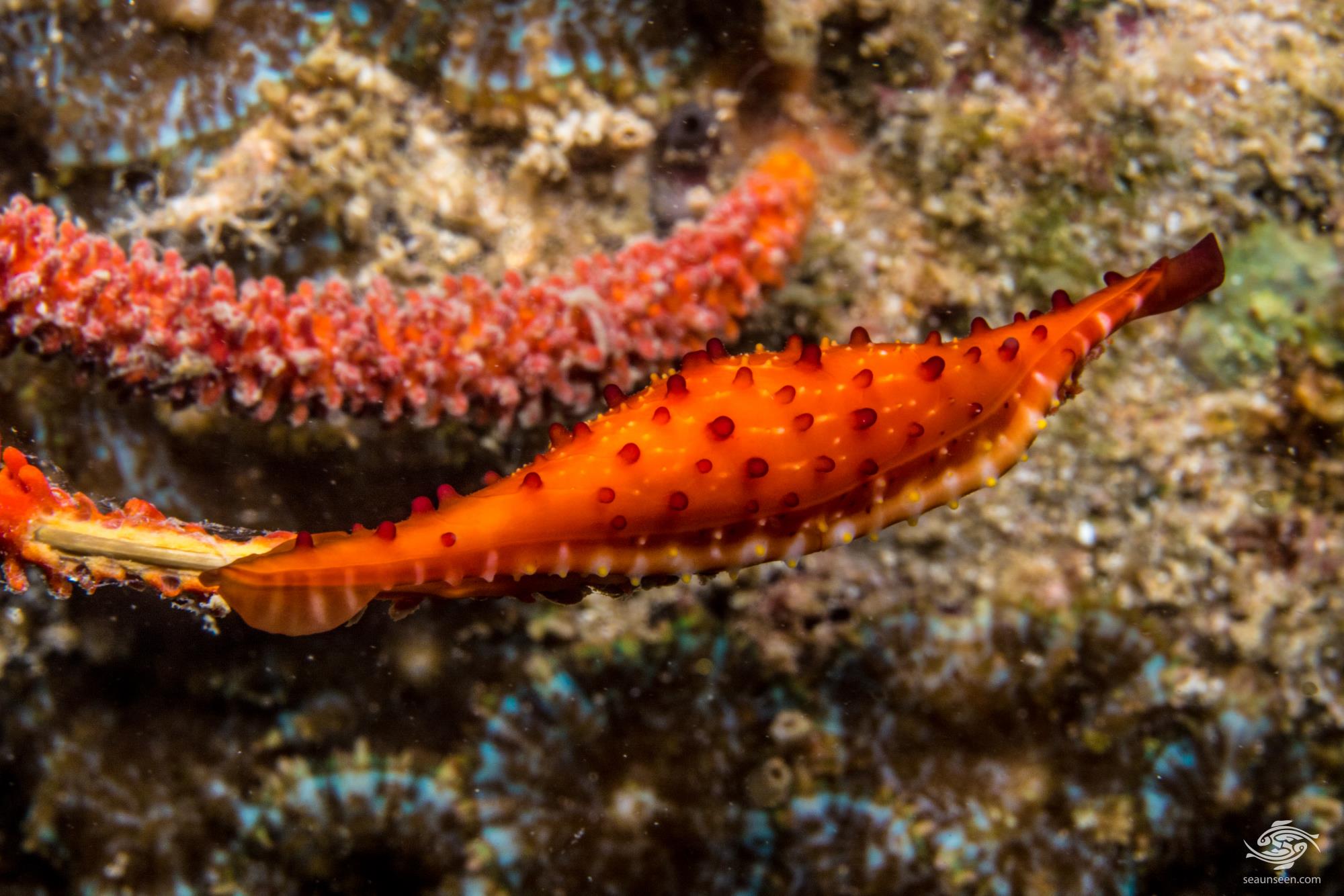 The Rosy Spindle Cowrie preys on numerous species of gorgonian corals ranging from bushes , fans and whip corals, devouring the polyps right down to the axis.

The sexes are separate and the female lays the eggs on the axis of the gorgonians on which they have been feeding on. The egg capsules are laid in rows of ten to thirty capsules. Each capsule contains between 30 to 160 eggs.  The eggs of Rosy Spindle Cowrie hatch in sequence and undergo a planktonic stage before settling down on the substrate. 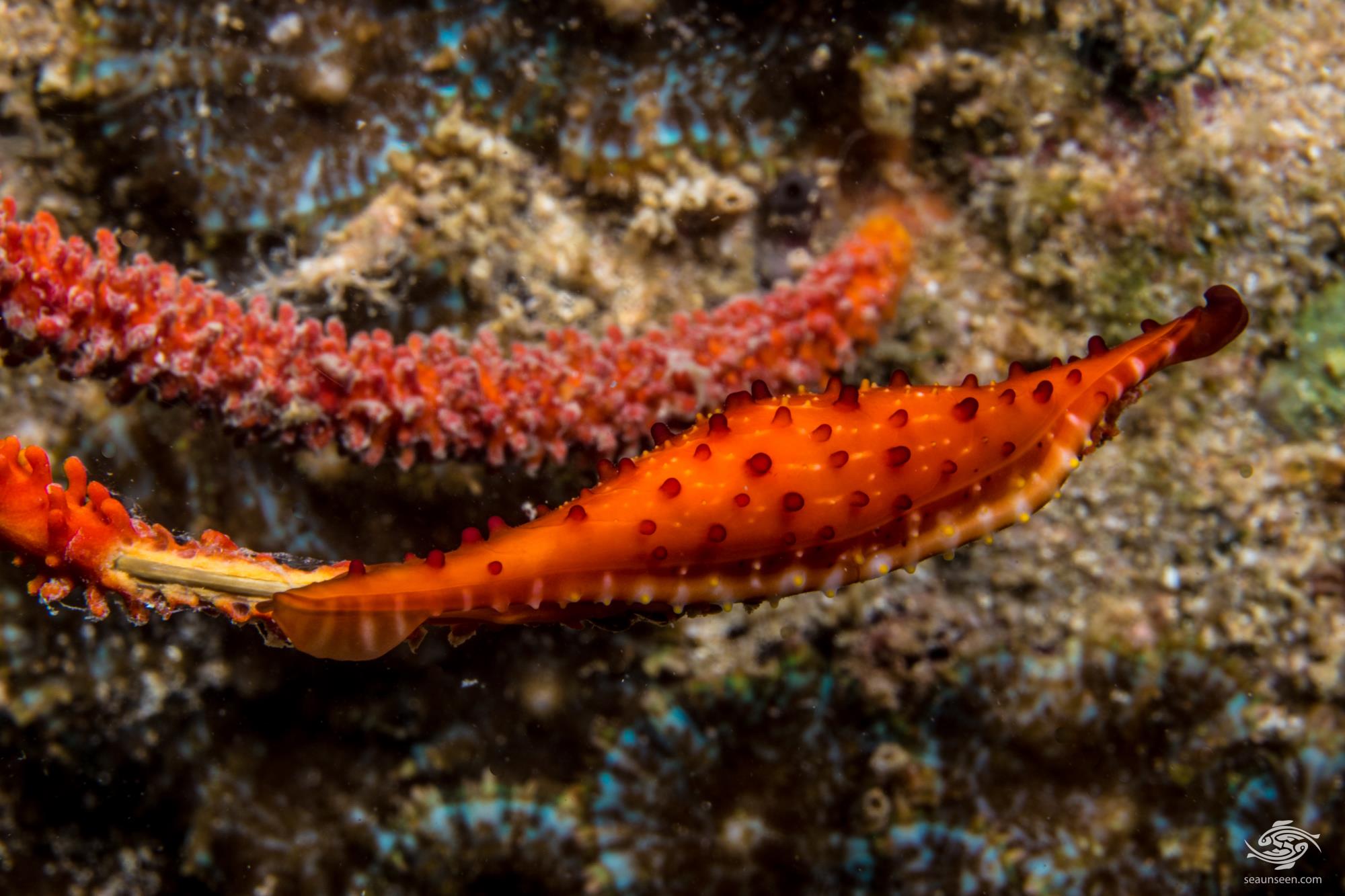 The shells are harvested for collectors, but given the lack of information on this species little is known of the impact on the population. Shells of Rosy Spindle Cowrie are best left in the ocean.

The Invisibility Cloak. Ovulids and Octocorals of Melanesia and Australia and the magic mantle that links them.  Roger Draper and Sue Churchill.