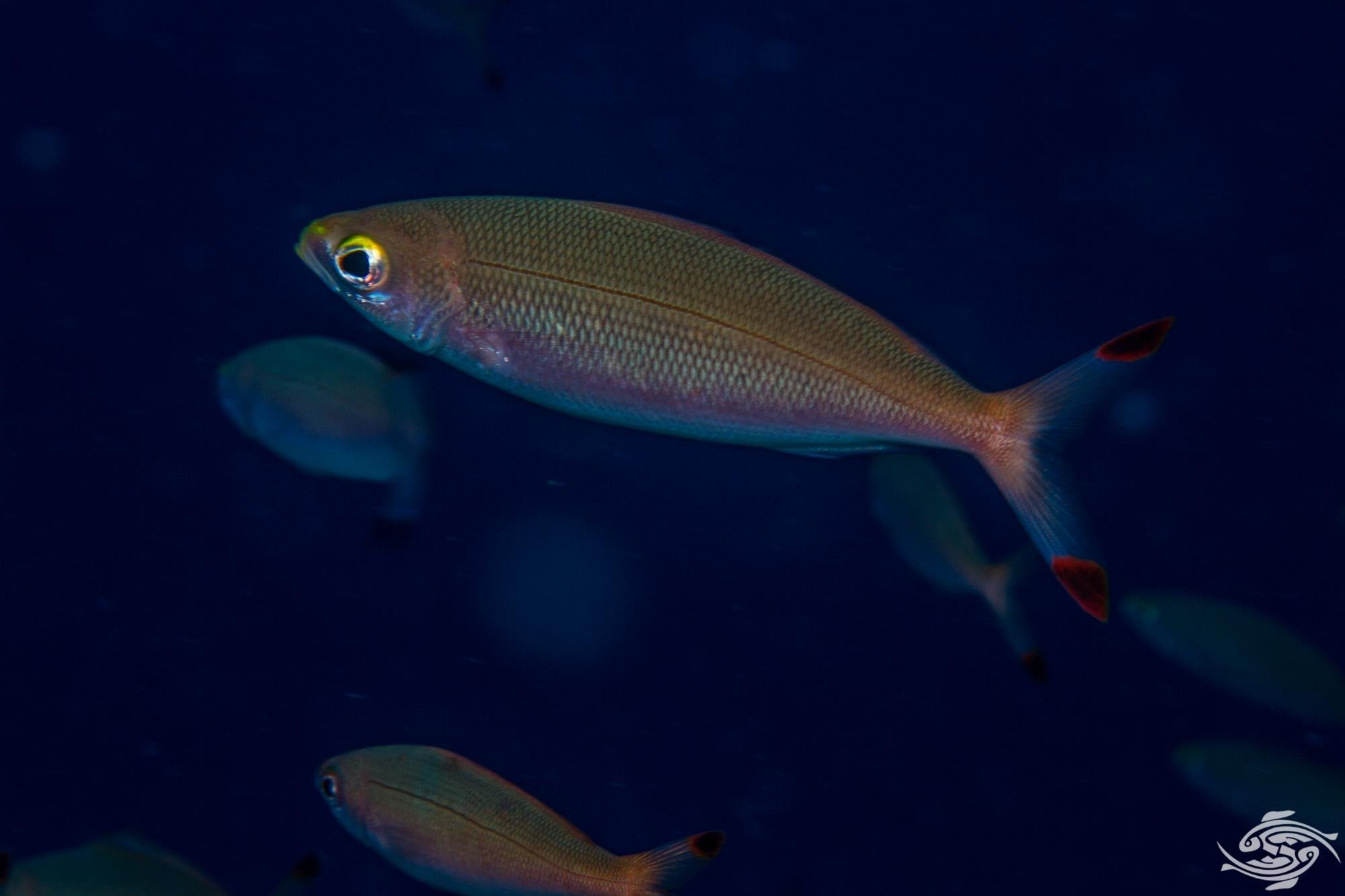 The Ruddy Fusilier (Pterocaesio pisang) is also known as the Bleeker’s Fusilier and the Banana Fusilier. They are fairly common on the East African coast and often swim with other species of Fusiliers.

The Ruddy Fusilier has a typical Fusilier shaped body , torpedo shaped with a deeply forked tail.  The juveniles are a pinky red colour with a yellowish face with a black blotch ringed in red on the rear of the forks of the caudal fin. As they age so the red diminishes in prominence and they become silver with a prominent black lateral line.  They grow up to 20 cm in length but are usually slightly smaller in the wild. 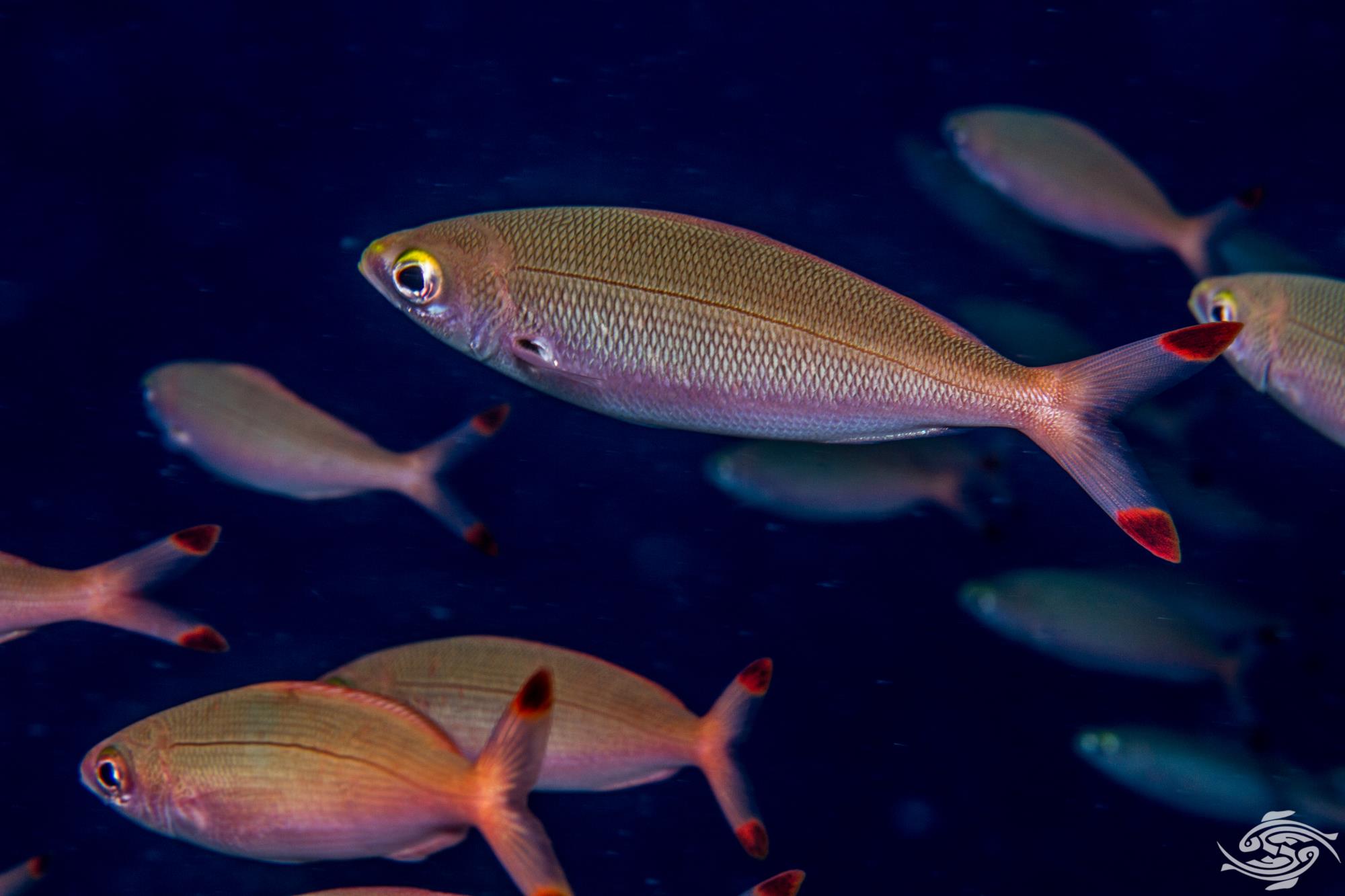 RUDDY FUSILIER IN THE WILD

The Ruddy Fusilier are usually seen in shoals mixed with other species of fusilier during the day. These shoals swim above the substrate often at quite high speed. They are curious fish and will often circle a diver.  On occasion the entire shoal will descend on a particular point on the reef and will feed, presumably on recently released eggs of some type.  The shoal mills around and then leaves as abruptly as they have arrived.

At night the fish are seen hiding individually on the reef mainly under overhangs and their colours are usually darkened slightly at night, presumably for camouflage purposes.

The juveniles are found in small shoals hiding under overhangs often with cardinalfish or juveniles of other species of Fusiliers.  This can be seen in the images lower down in the post. 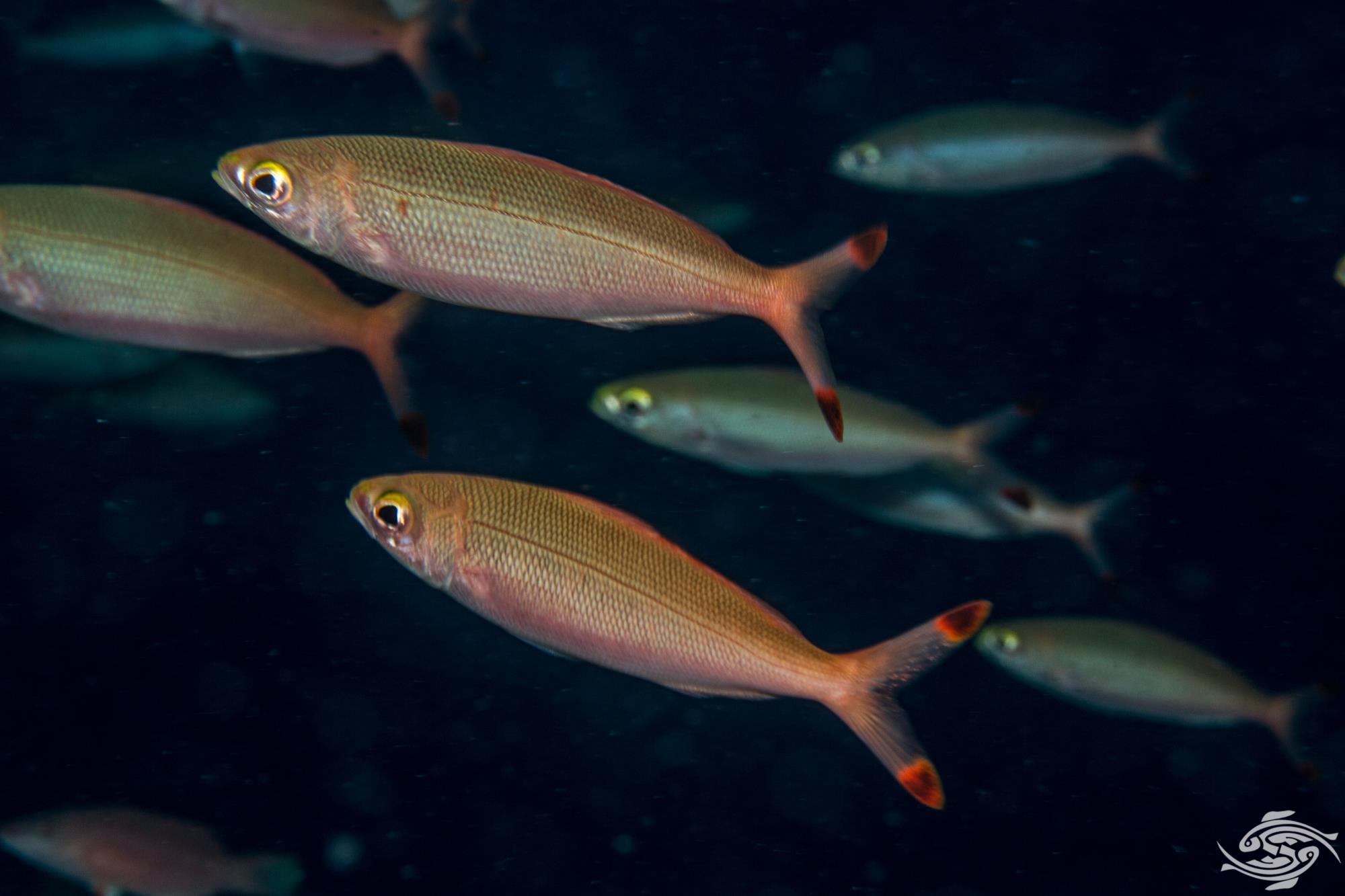 The Ruddy Fusilier has a wide distribution and is found from the east coast of Africa across to southern Japan, down to Australia and across to the mid Pacific islands.  They seem to favor  depths of 12 to 20 meters but are found from 4 to 60 meters. 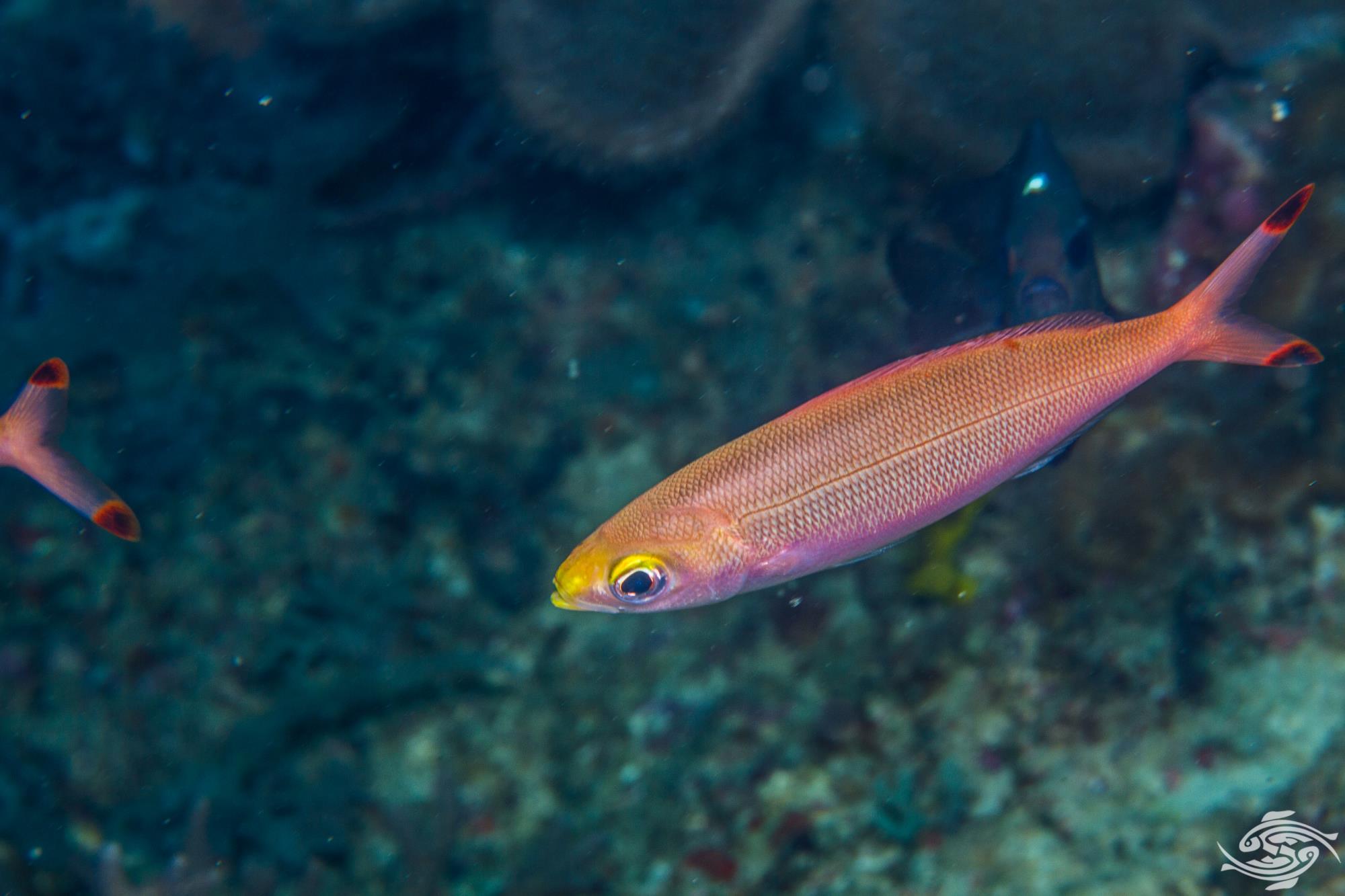 The Ruddy Fusilier feed  exclusively on planktonic matter and the upper jaw is able to protrude out, making it easier to snatch plankton.  They are preyed on by Tuna and other gamefish and are therefore indirectly important as a commercial species.  In some parts of their range they are netted and caught in traps. They also make excellent bait for Tuna and in some areas are netted for this purpose. 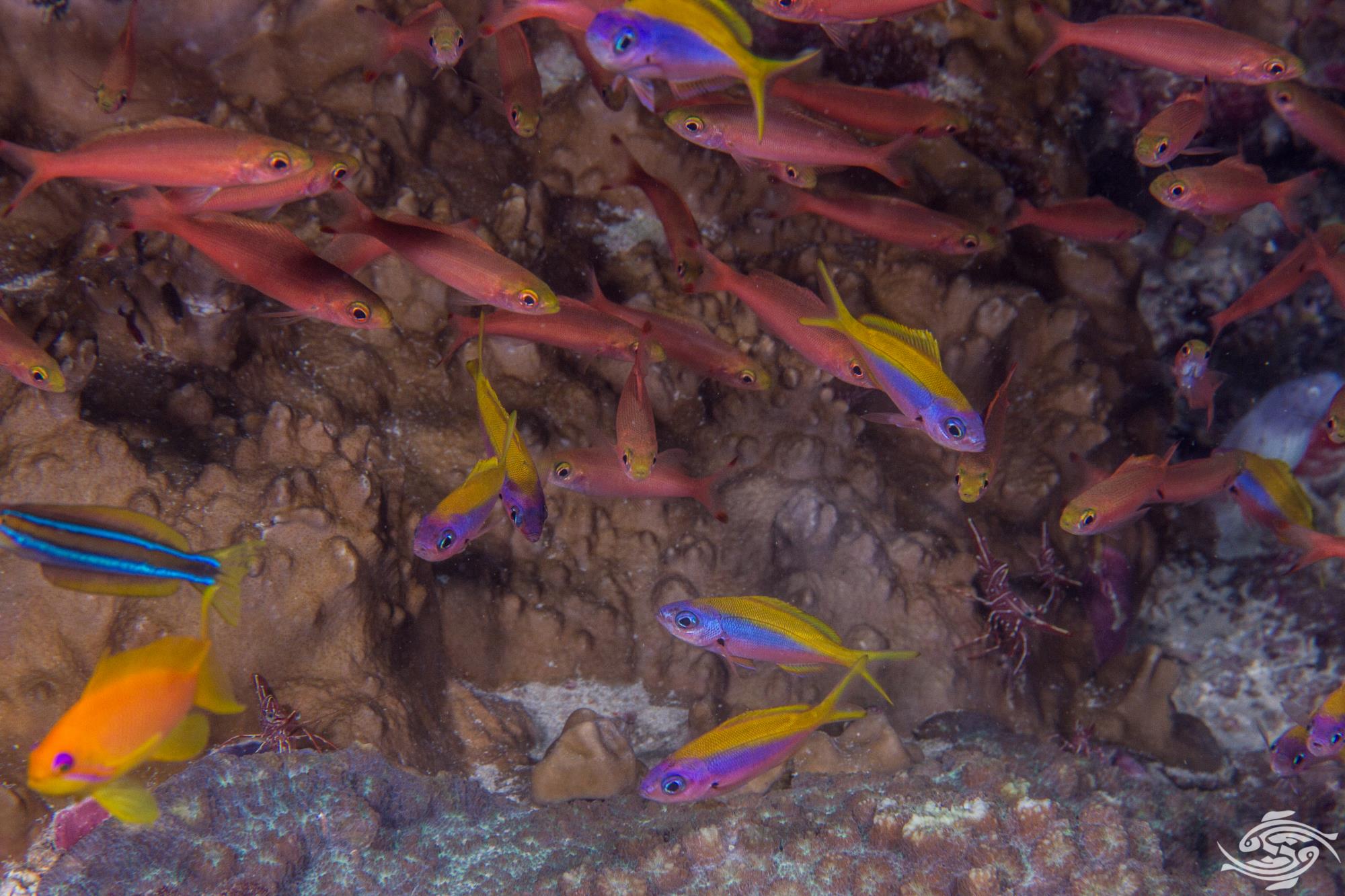 Spawning appears to be prolific within the shoals and there is a long spawning season. Spawning usually takes pace around dusk and the eggs are released into the water table. 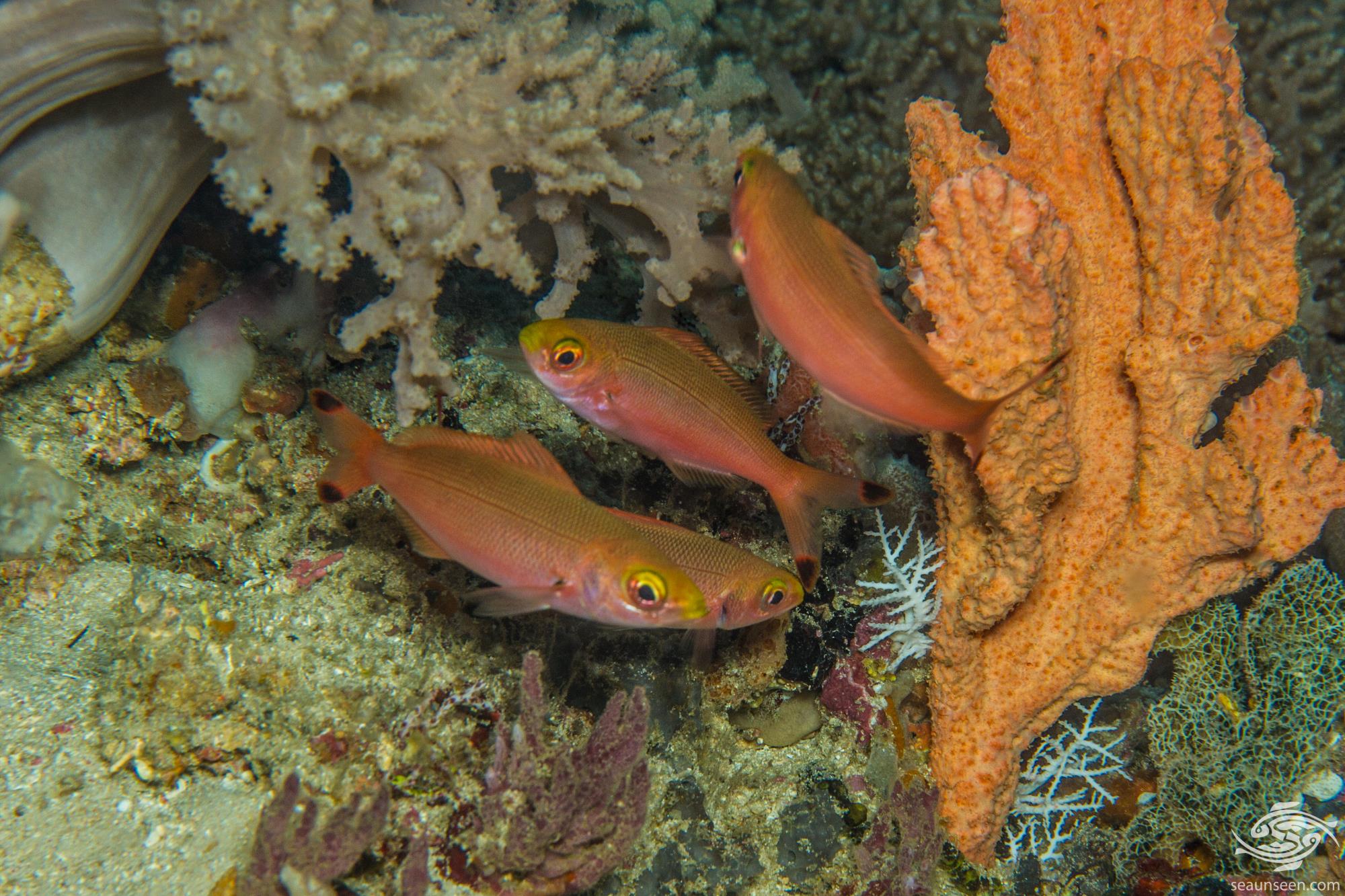