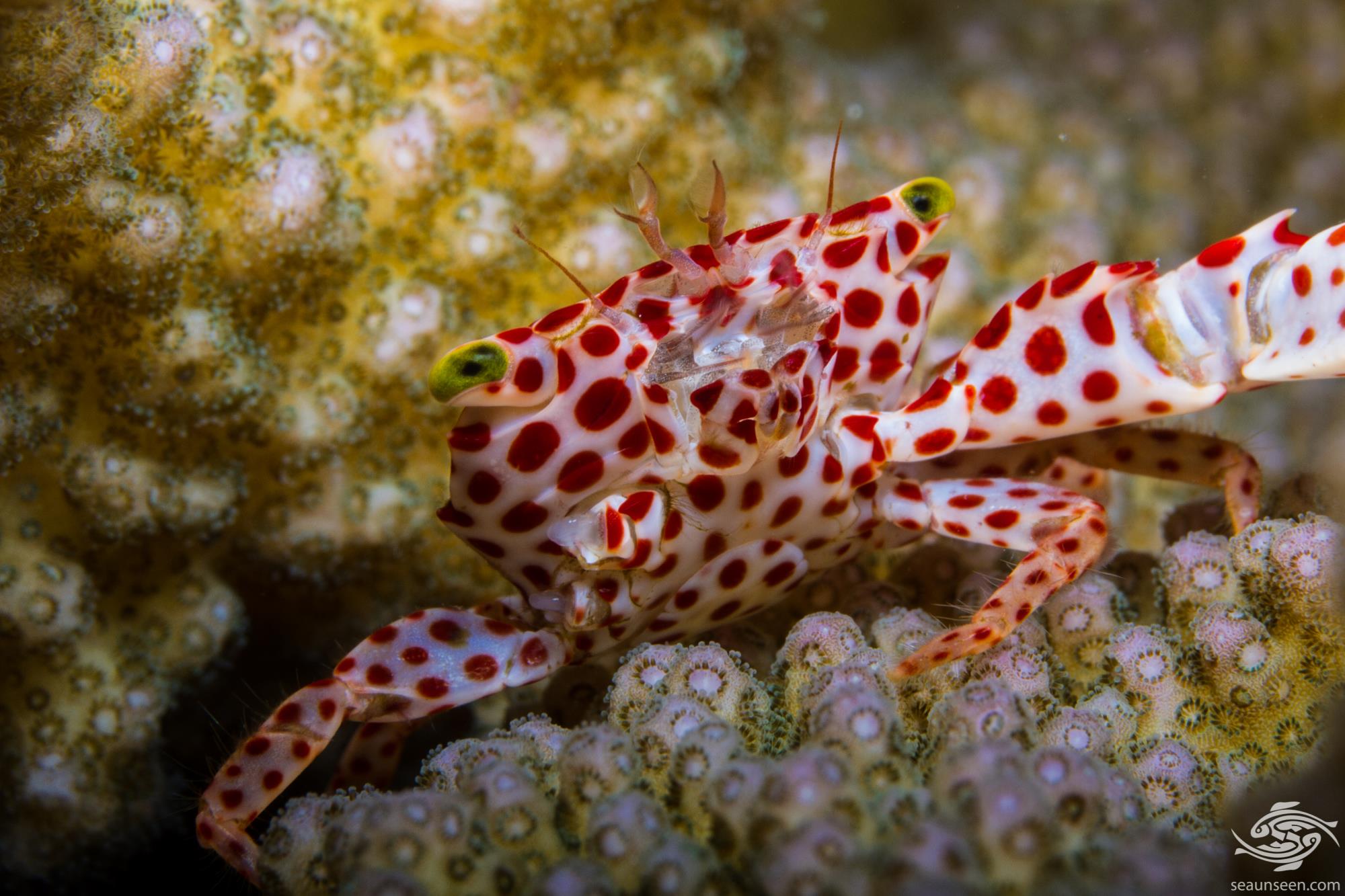 The Rust Spotted Guard Crab, (Trapezia rufopunctata) is also known as the Red Spotted Guard Crab in some areas. They  spend their entire lives living between the branches of corals of the Pocillopora and Acropora families.  They have a mutualistic relationship with these corals and guard them against certain predators, among them the Crown of Thorns Starfish. 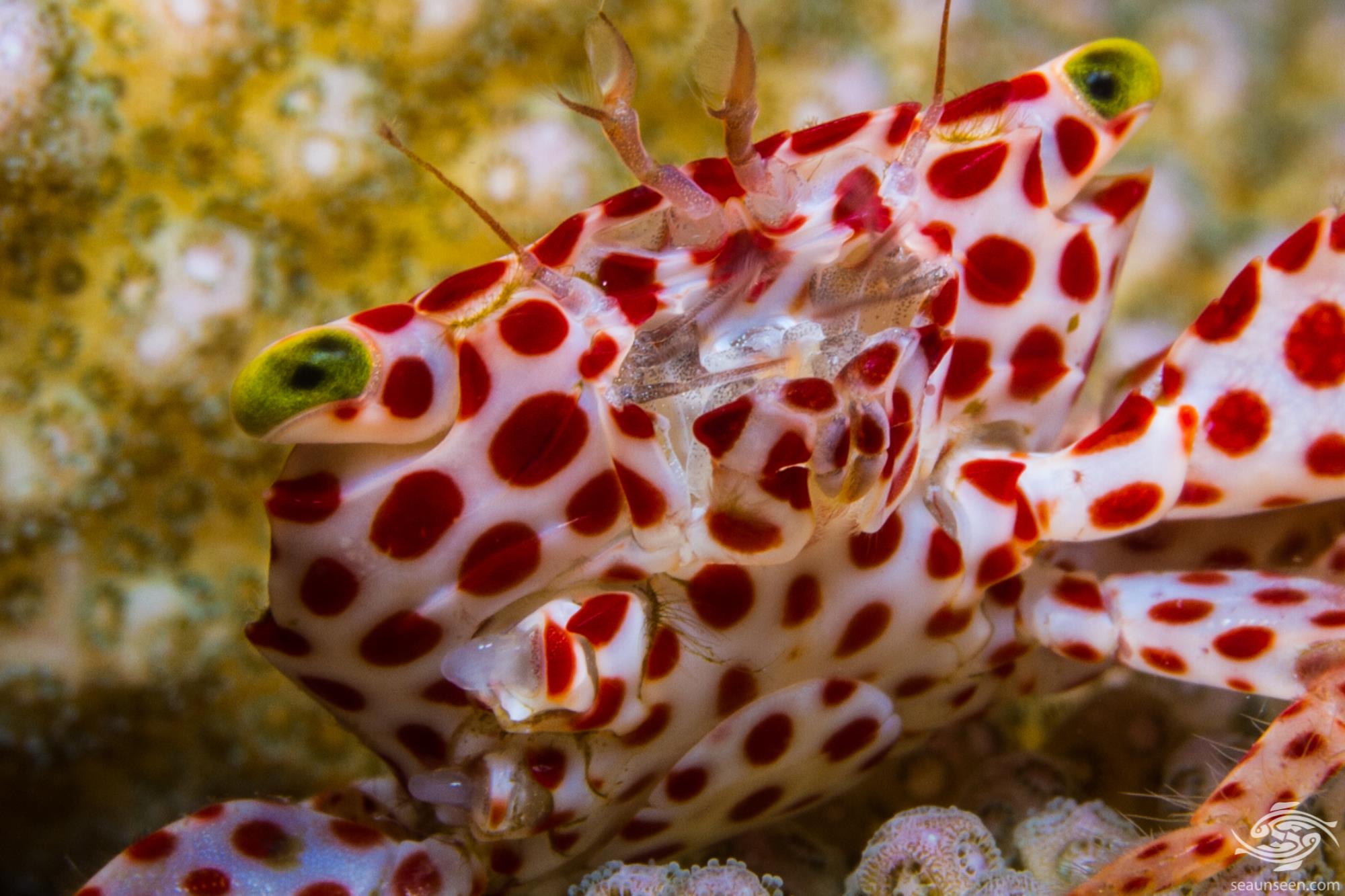 The Rust Spotted Guard Crab have a whitish coloured body with bright red dots covering the entire body and legs. The body is roughly trapezoidal in shape and the claws are proportionally fairly large. The eyes are a greenish colour. They grow to a maximum width of 5 cm in width. The crabs in the image in the post were all in the 2cm range. 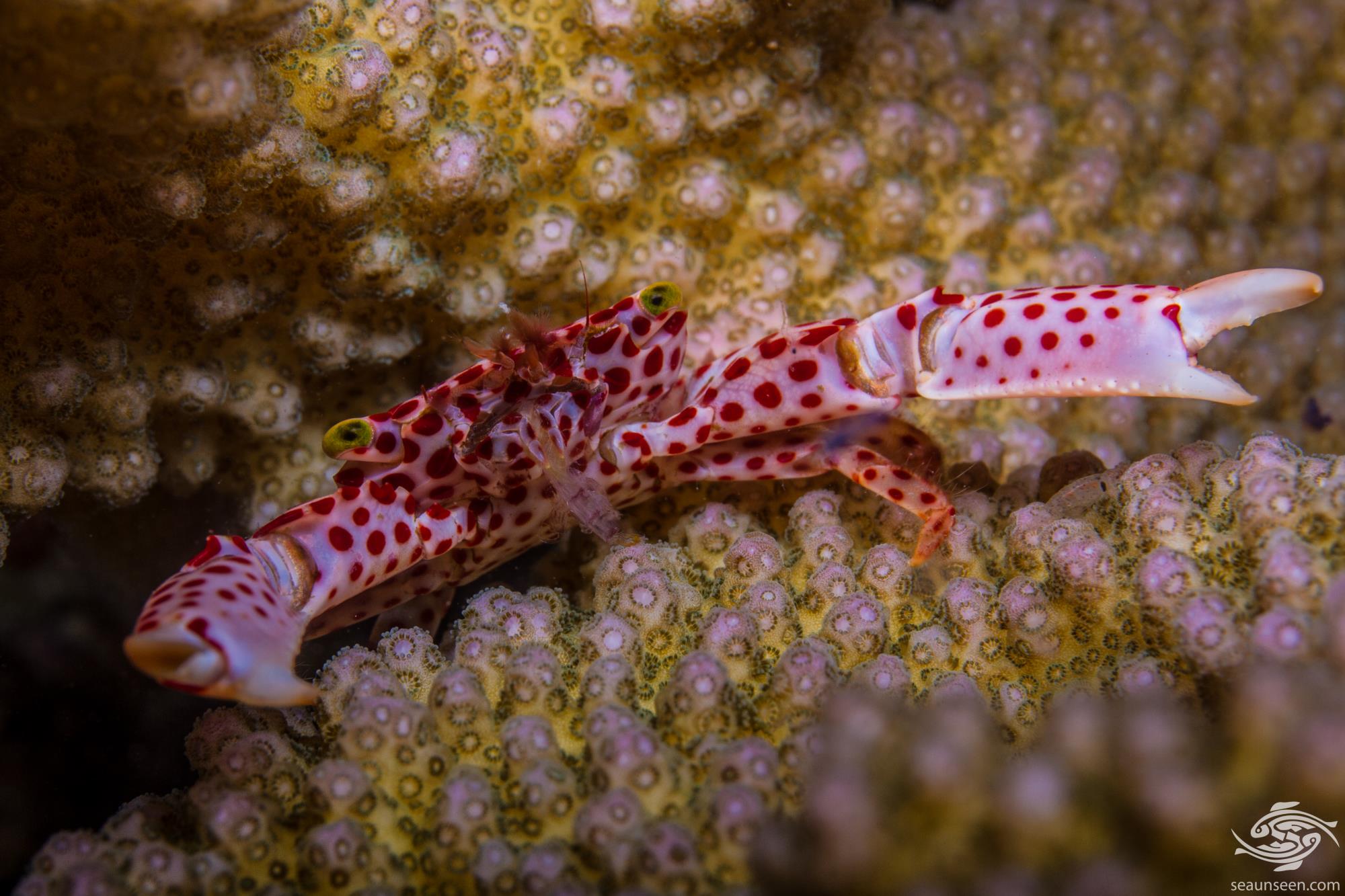 Rust Spotted Guard Crab are extremely shy and are very difficult to photograph. Usually they will retreat into the branches of their host coral at the approach of a diver.  They are quick to put their claws up towards any threat to them or the coral and even a diver as they retreat into their hiding spots. They keep the corals clean and guard the corals against threats from the Crown of Thorns Starfish.

Scientists refer to this type of relationship as mutualism. Both species benefit from being together. There are several different species of guard crabs and in the larger corals one will often see more than one species. There will however only be one pair from each species. At night there are often Hawkfish sleeping in the corals with the crabs scuttling around them. The crabs do not seem to mind them being in the corals.

One would assume that they would be quite safe from any predator in their coral home, however one night I viewed a Cuttlefish pulling Hawkfish and the crabs out the coral one by one. The cuttlefish felt around the coral with his arms and then extracted them with his tentacles. 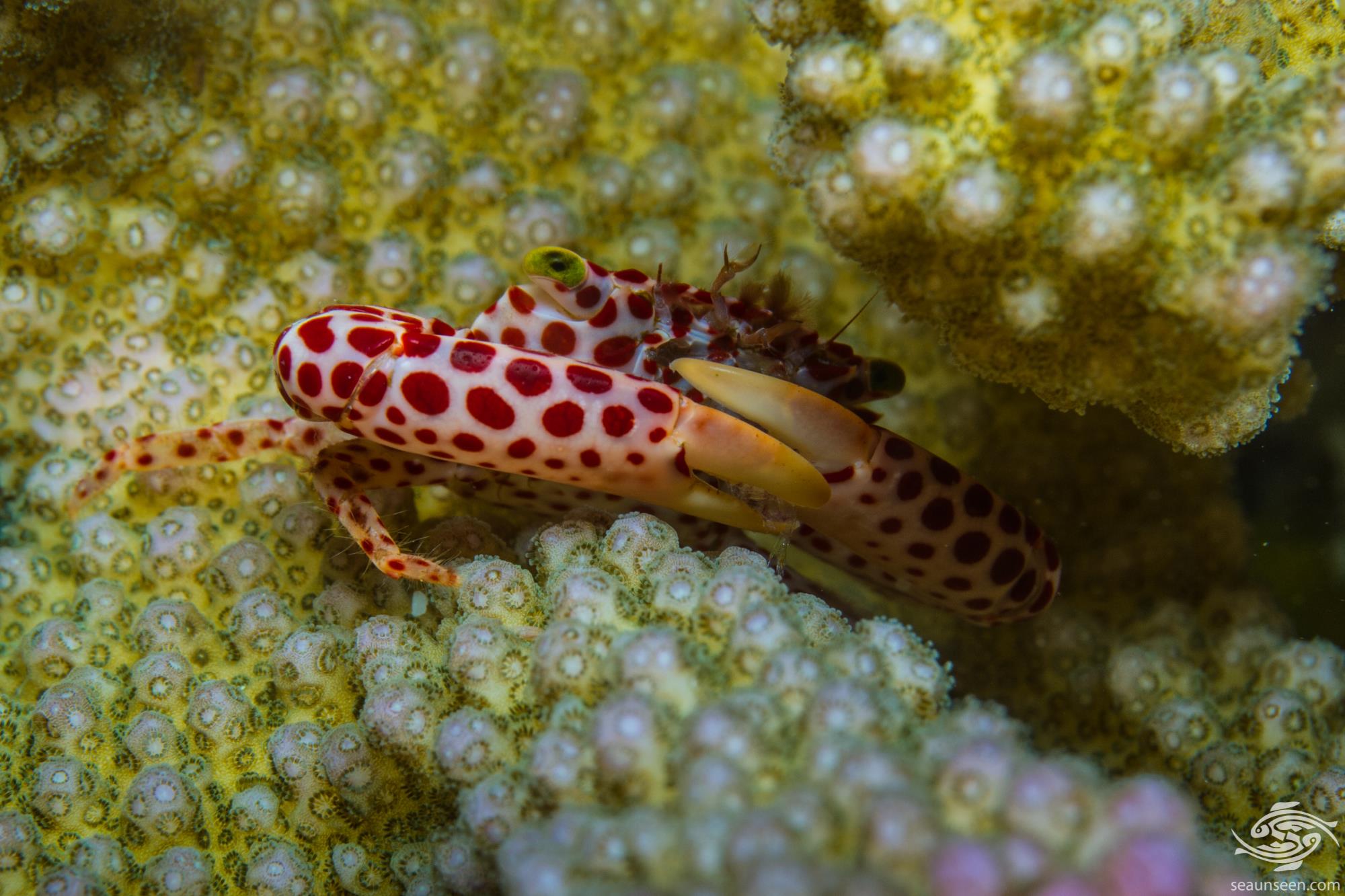 The Rust Spotted Guard Crab are found on coral reefs across the Indo Pacific area. They range from South Africa in the south, up the east coast of Africa across to Southern Japan and as far west as Hawaii. They are only found in Pocillopora and Acropora small polyp stony corals. 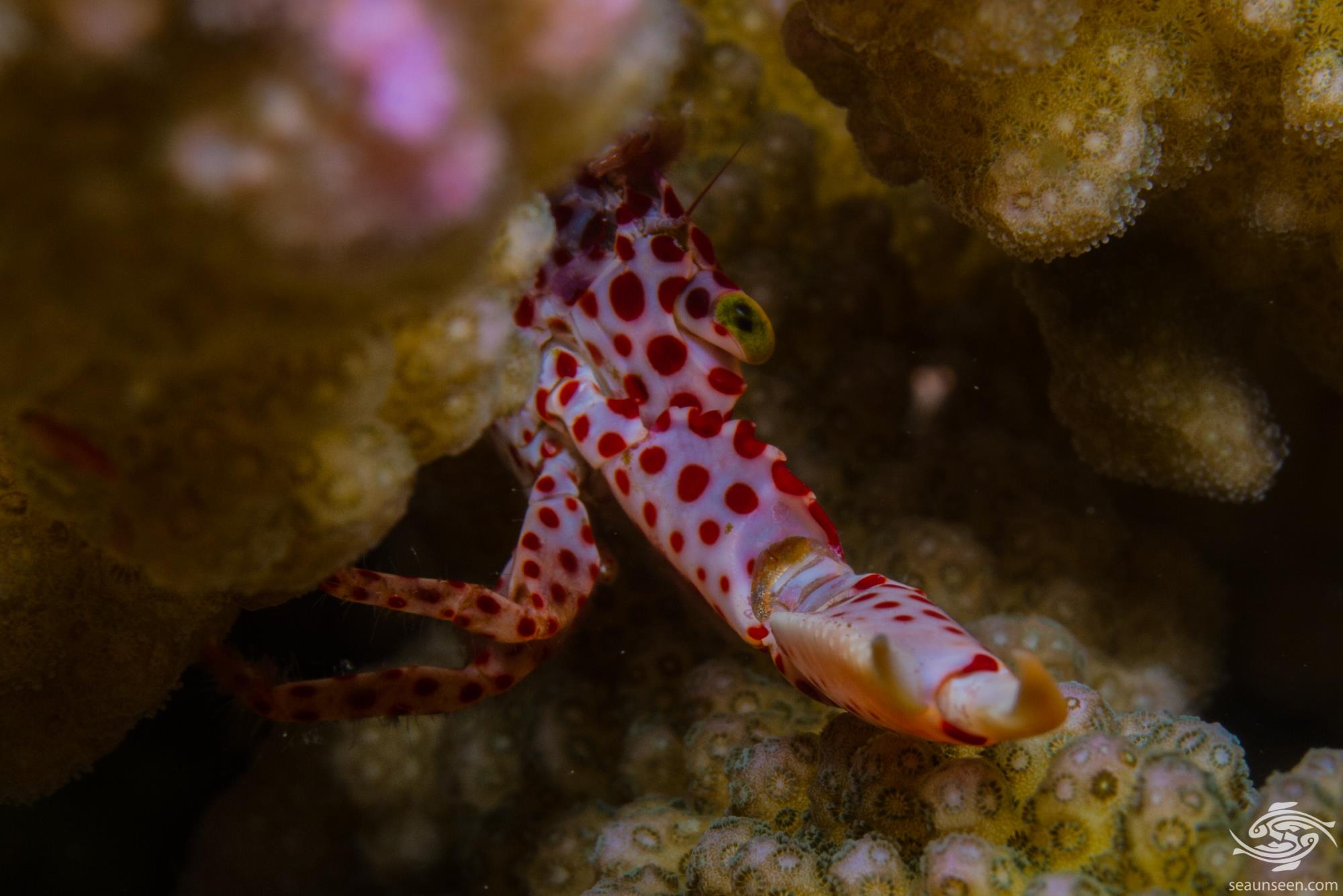 Rust Spotted Guard Crab feed only on mucus and polyps from the host coral. They massage the coral polyps with their legs until the polyps release a slimy mucus which the crabs eat. The mucus is collected by hairs on the lower part of the legs and passed to the mouth parts. 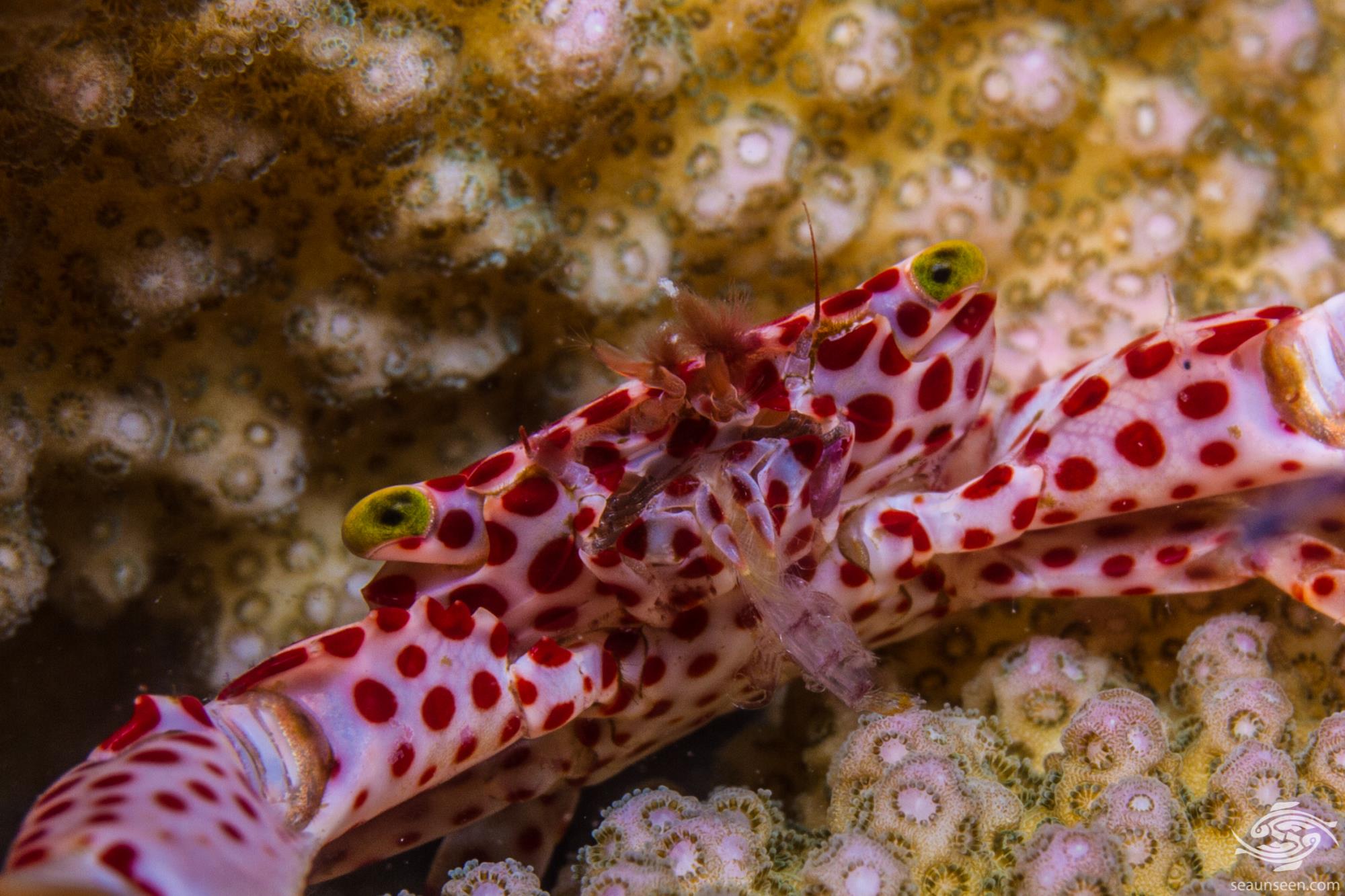 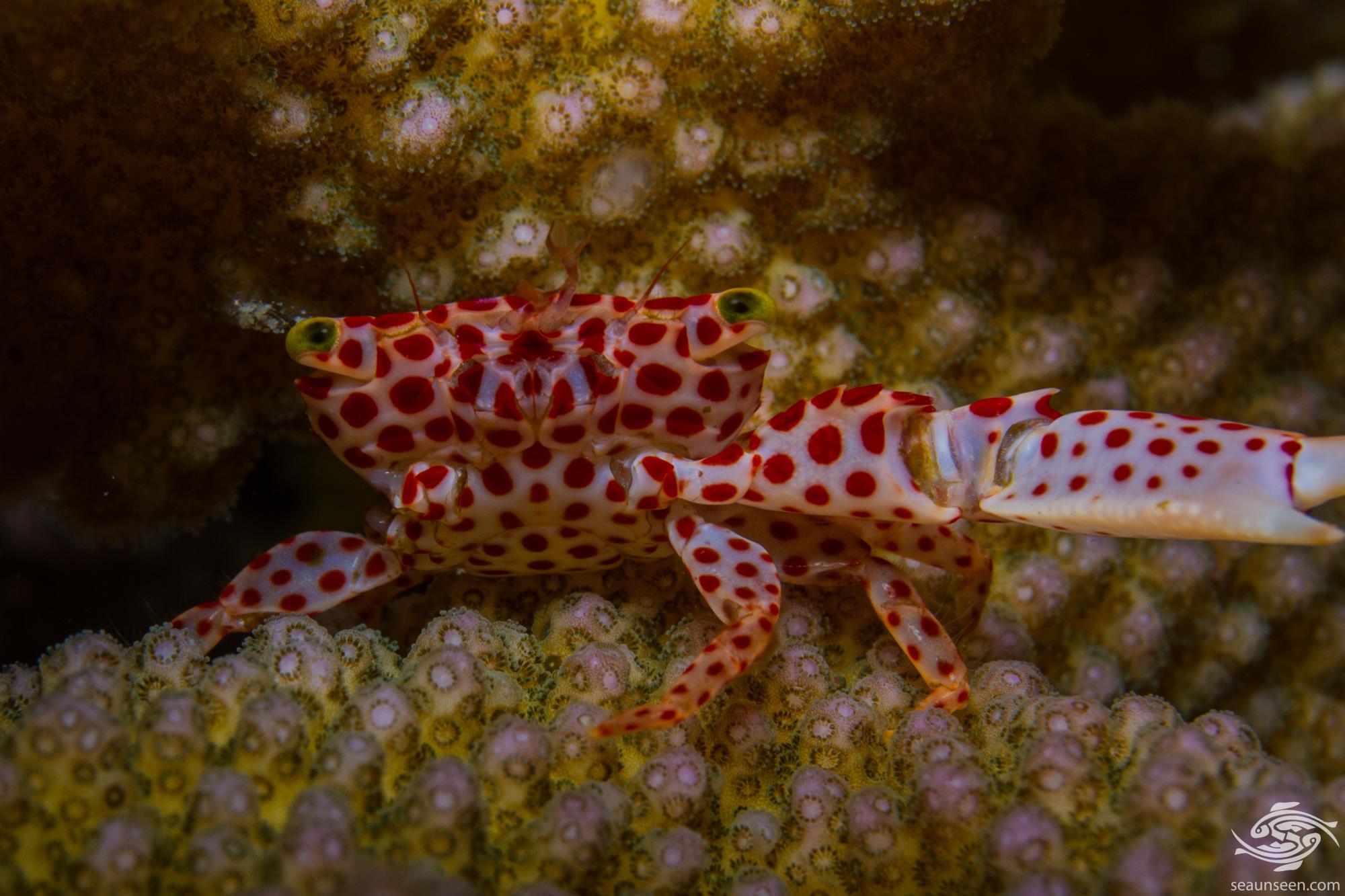 Rust Spotted Guard Crab can be kept in an aquarium and if one has large enough Pocillopora or Acropora corals they can be an attractive addition to a tank. Additionally they have been found to be good for the health of the corals.

Do not expect to see much of them, they are very shy and seldom if ever venture out the coral. It is possible to keep a mated pair in one piece of coral. 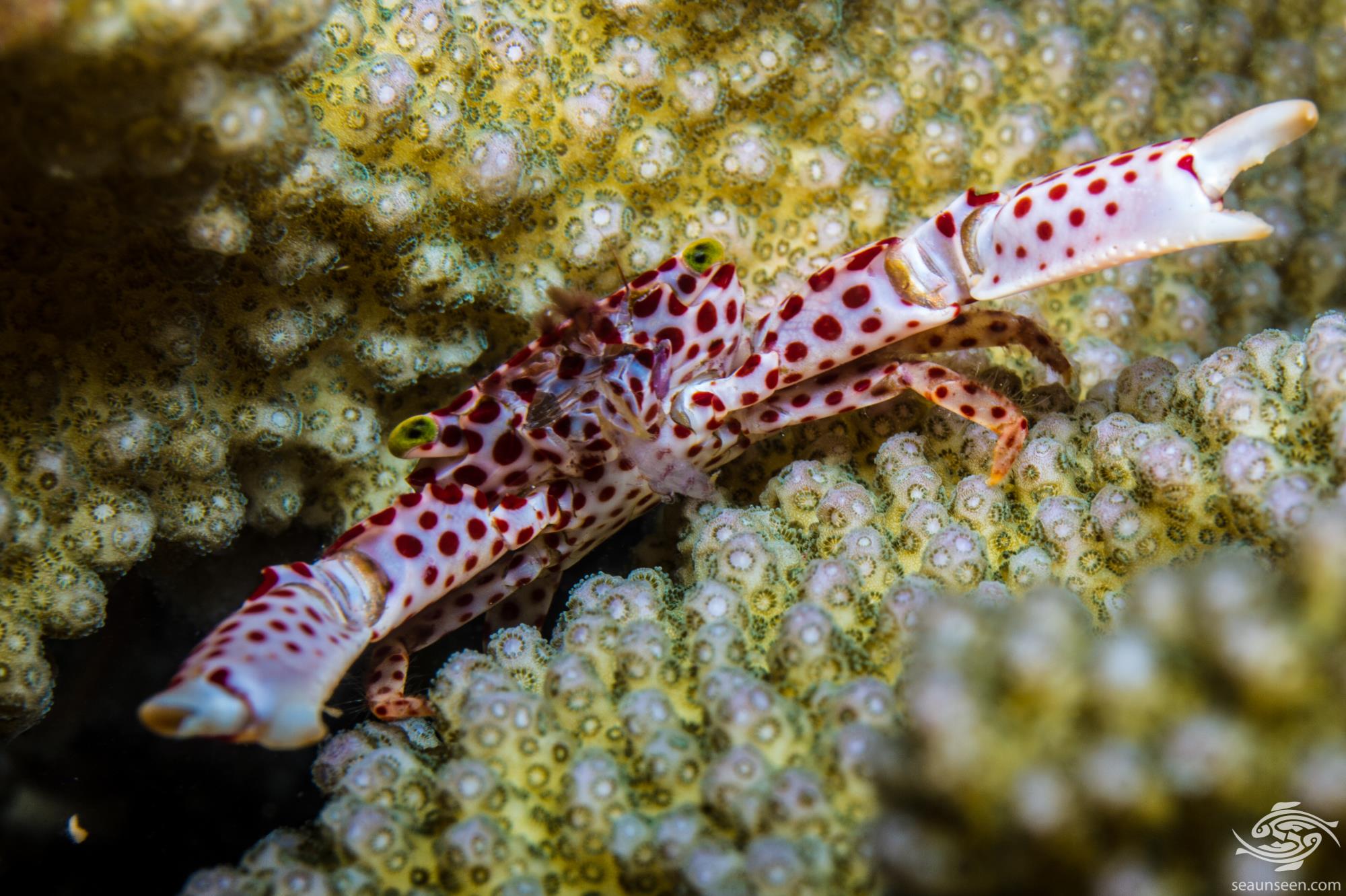 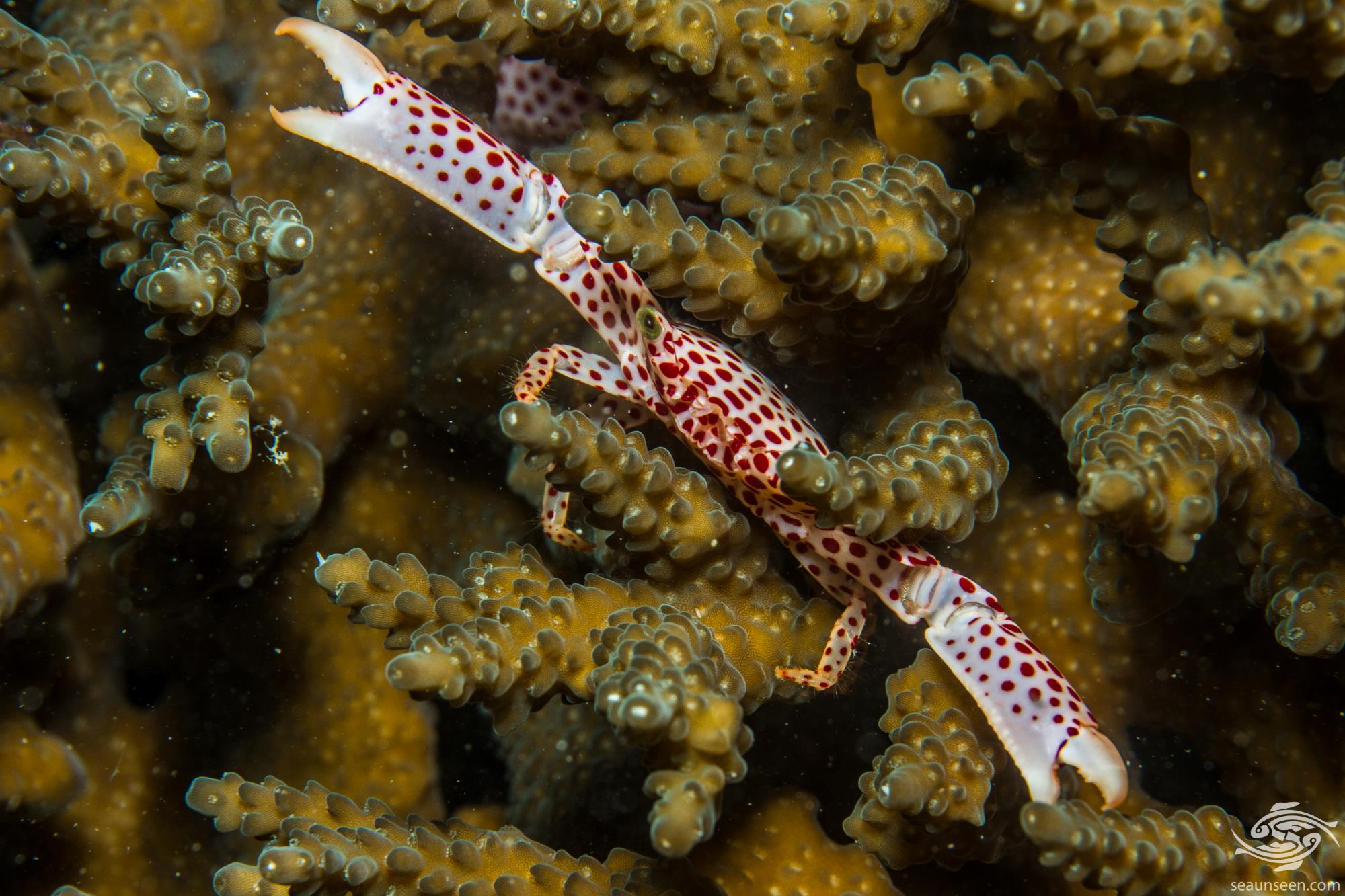 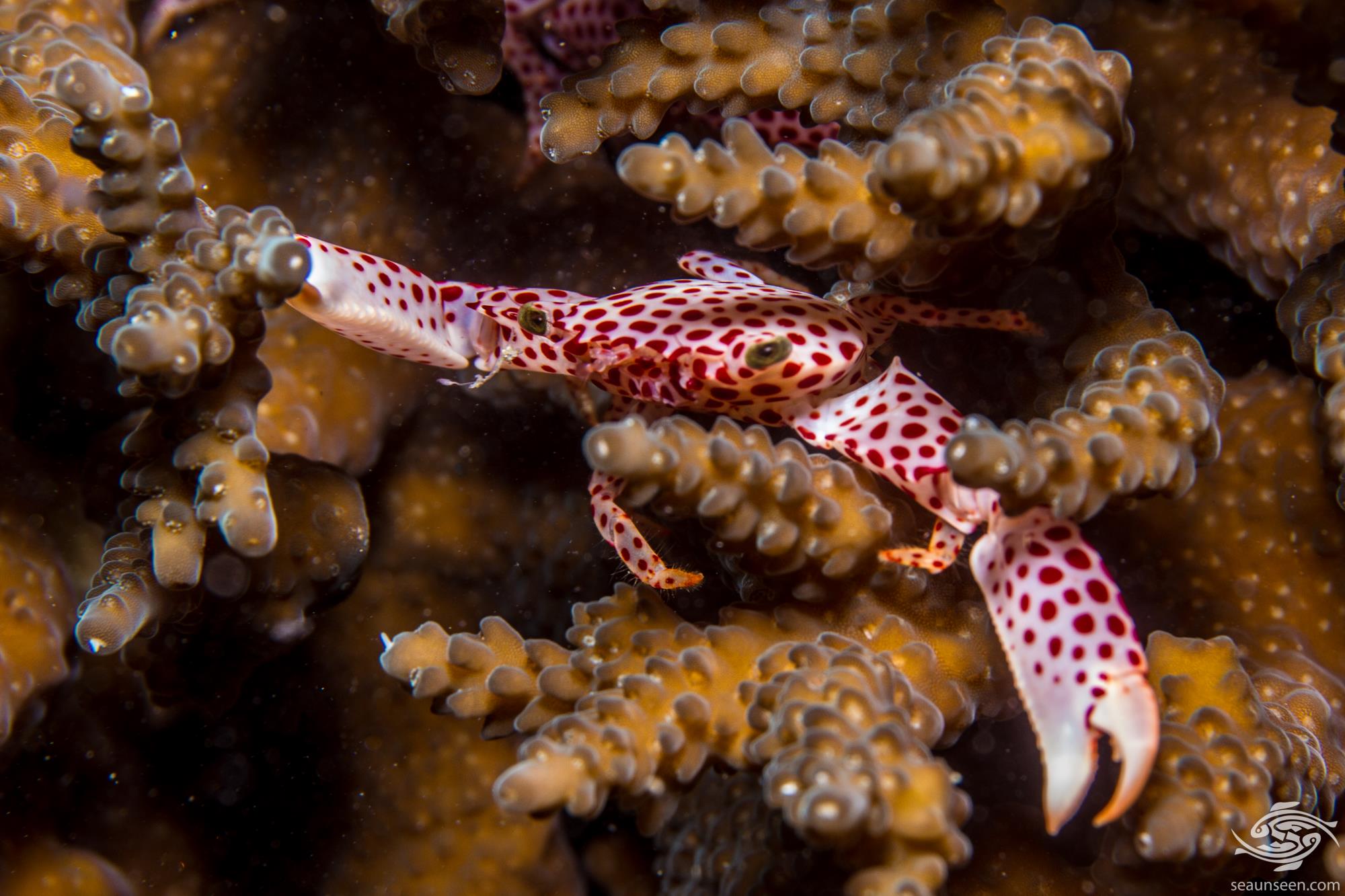 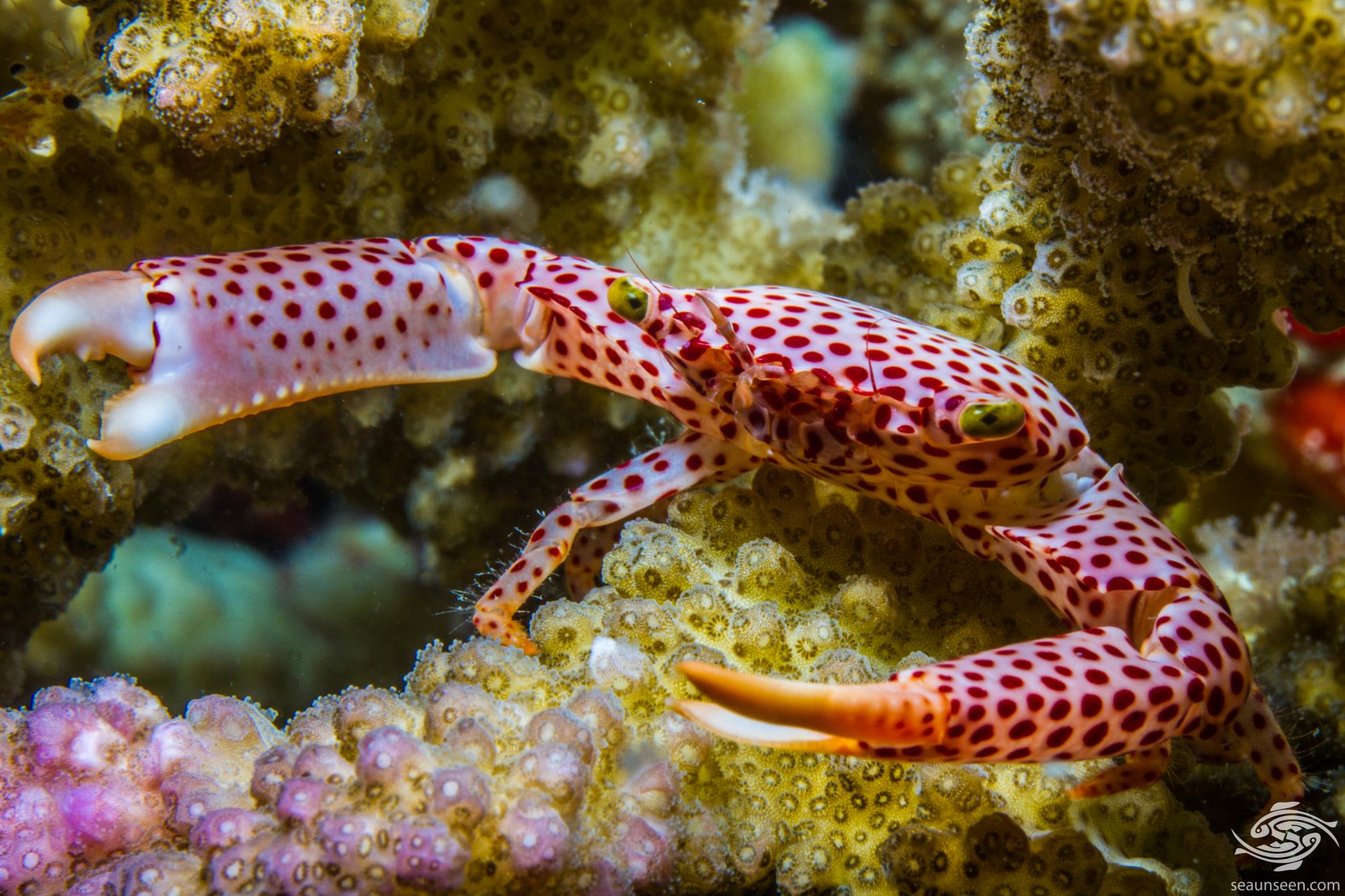