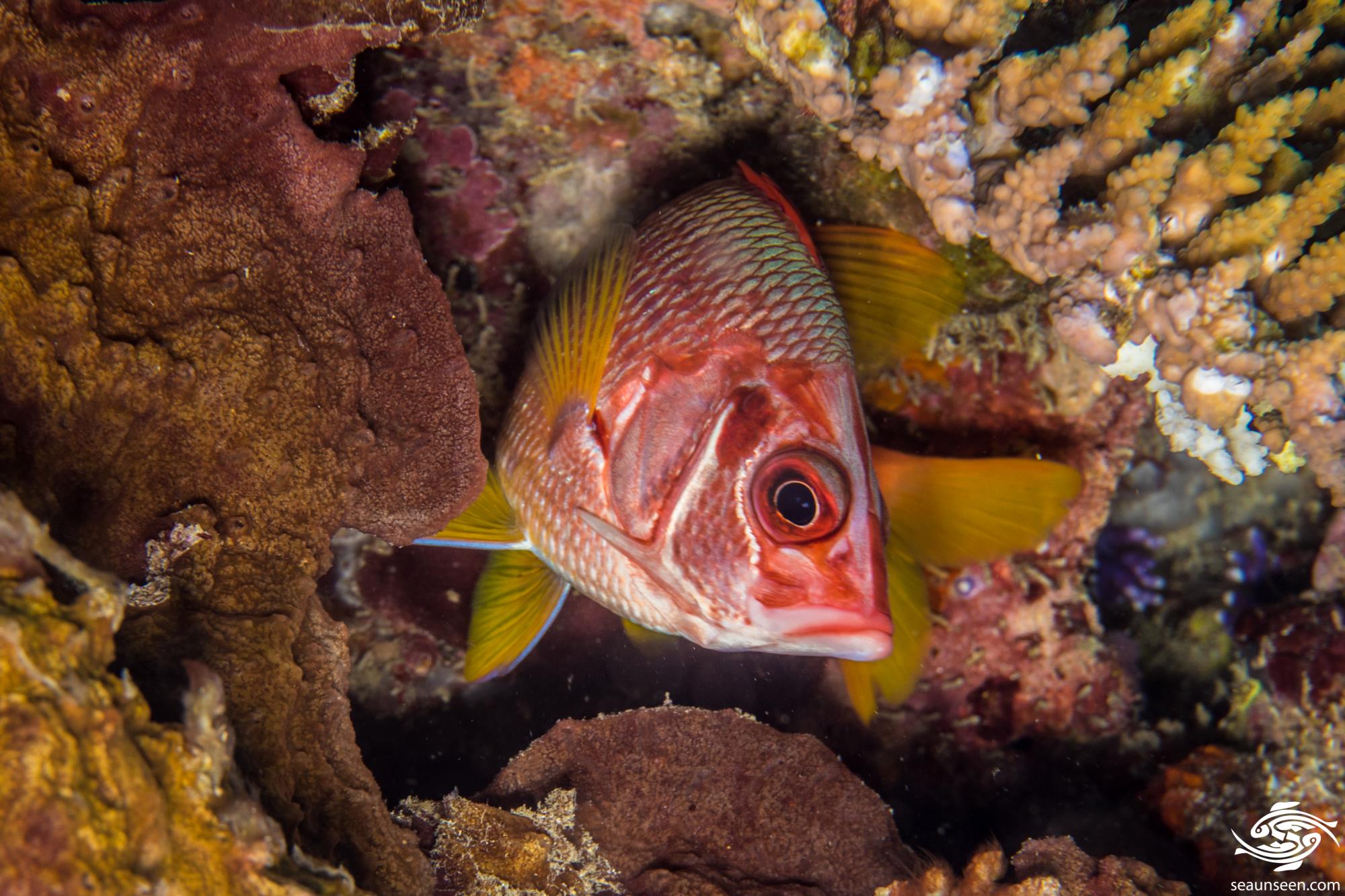 The Saber squirrelfish (Sargocentron spiniferum) is also known as the Giant squirrelfish and Spiny squirrelfish.  They are named after the large curved spine on the lower gill cover  which can be seen in the image above. Size wise they are the largest squirrelfish around.  Interestingly they have been absent from the Dar es Salaam area for many years but adults have just returned in fairly large numbers. 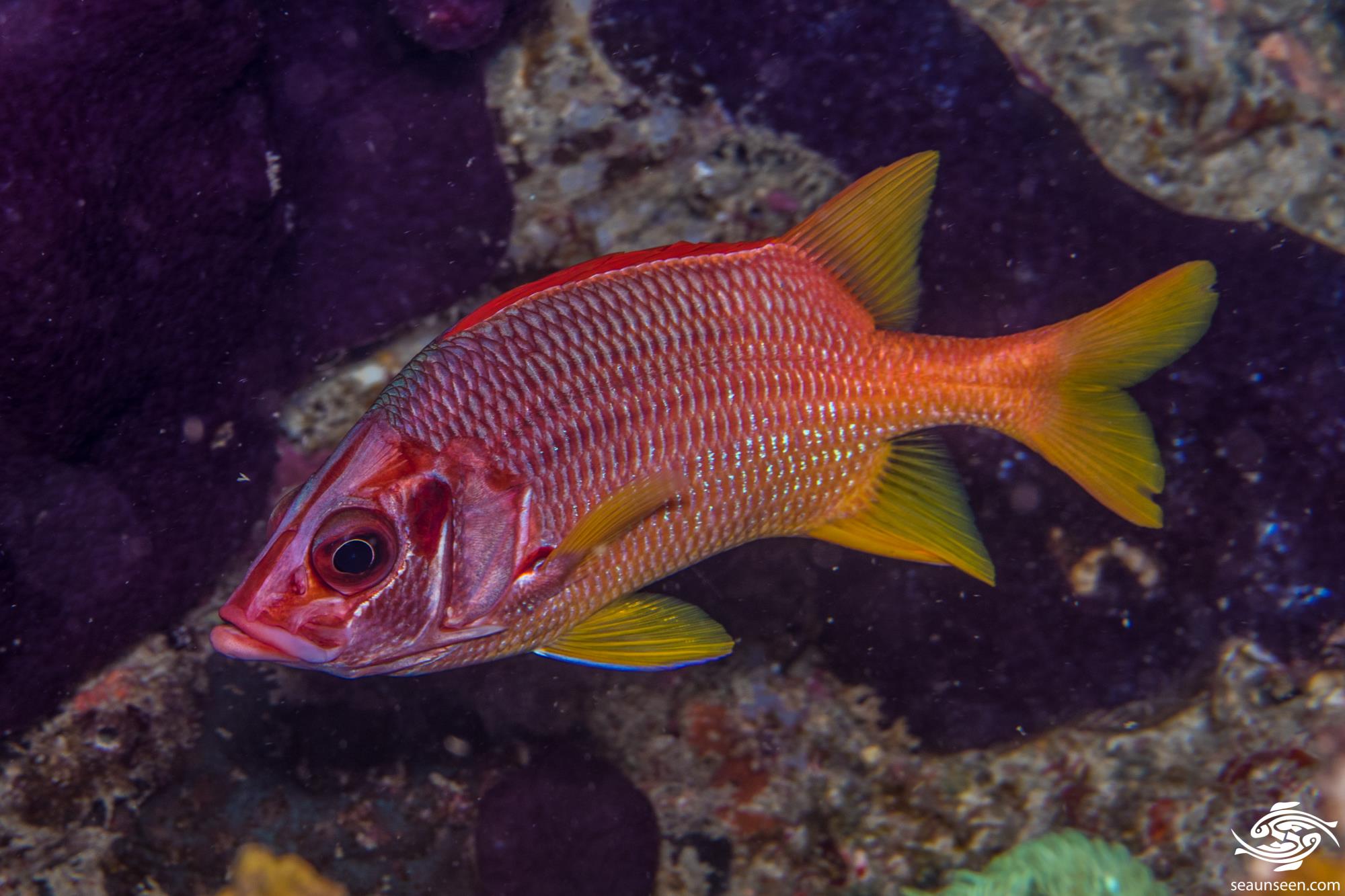 The Saber Squirrelfish has a typical Squirrelfish shape and the body is red with silver edges to the scales and the fins are yellow. Because of the yellow on the fins they are easy to identify.  Additionally as mentioned earlier they have a large spine on the gill cover which can be seen in the image below. They have a proportionally large eye and are nocturnal feeders. They grow up to 51 cm in length. The fishes in the images are roughly in the 35 centimeter range. They are almost certainly capable of darkening their colors. 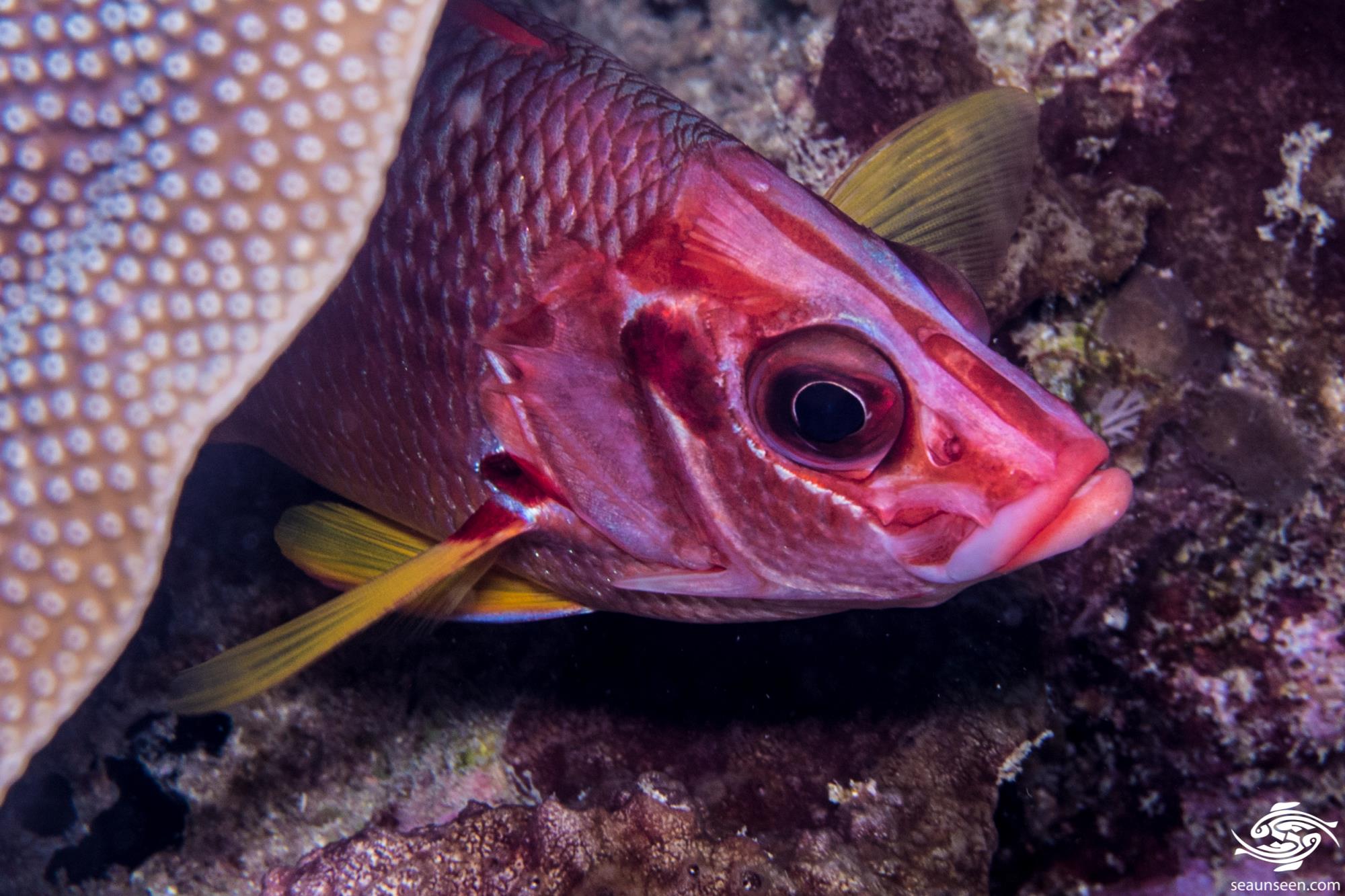 SABER SQUIRRELFISH IN THE WILD

The Saber Squirrelfish is not as common as the Crowned Squirrelfish and the Tailspot Squirrelfish  in Tanzania and appear to be more shy. For years they have been absent from the Dar es Salaam area but in December 2020 suddenly returned to the shallower inshore unprotected reefs in quite large numbers.  To date we have only seen them in the 10 to 18 meters range although they are documented being down to 120 meters.

They generally hide from a diver whereas the other squirrelfishes are not as cryptic.  They will head straight for cover and then dart out every now and again to see if the diver is still there. They are usually seen under overhangs or in caves. More often than not they are seen singularly but on occasion they are seen in pairs or small groups. Their maximum lifespan appears to be around 7 years. 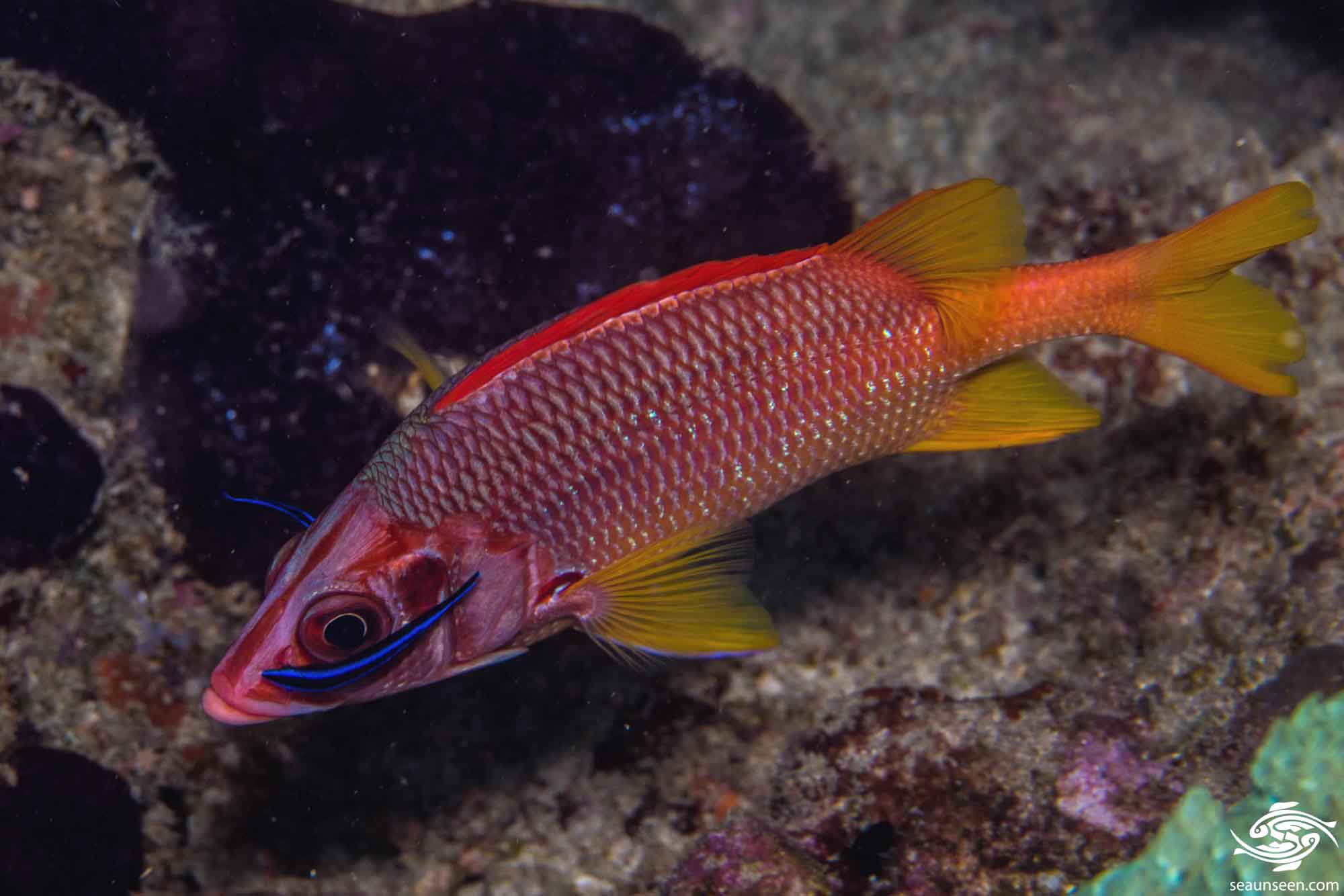 The Saber squirrelfish is found from the South and East Coasts of Africa across the Indian Ocean Islands to Japan and south to Australia and across to Hawaii. They are usually seen from 10 meters downwards. They have been reported to 122 meters in depth. 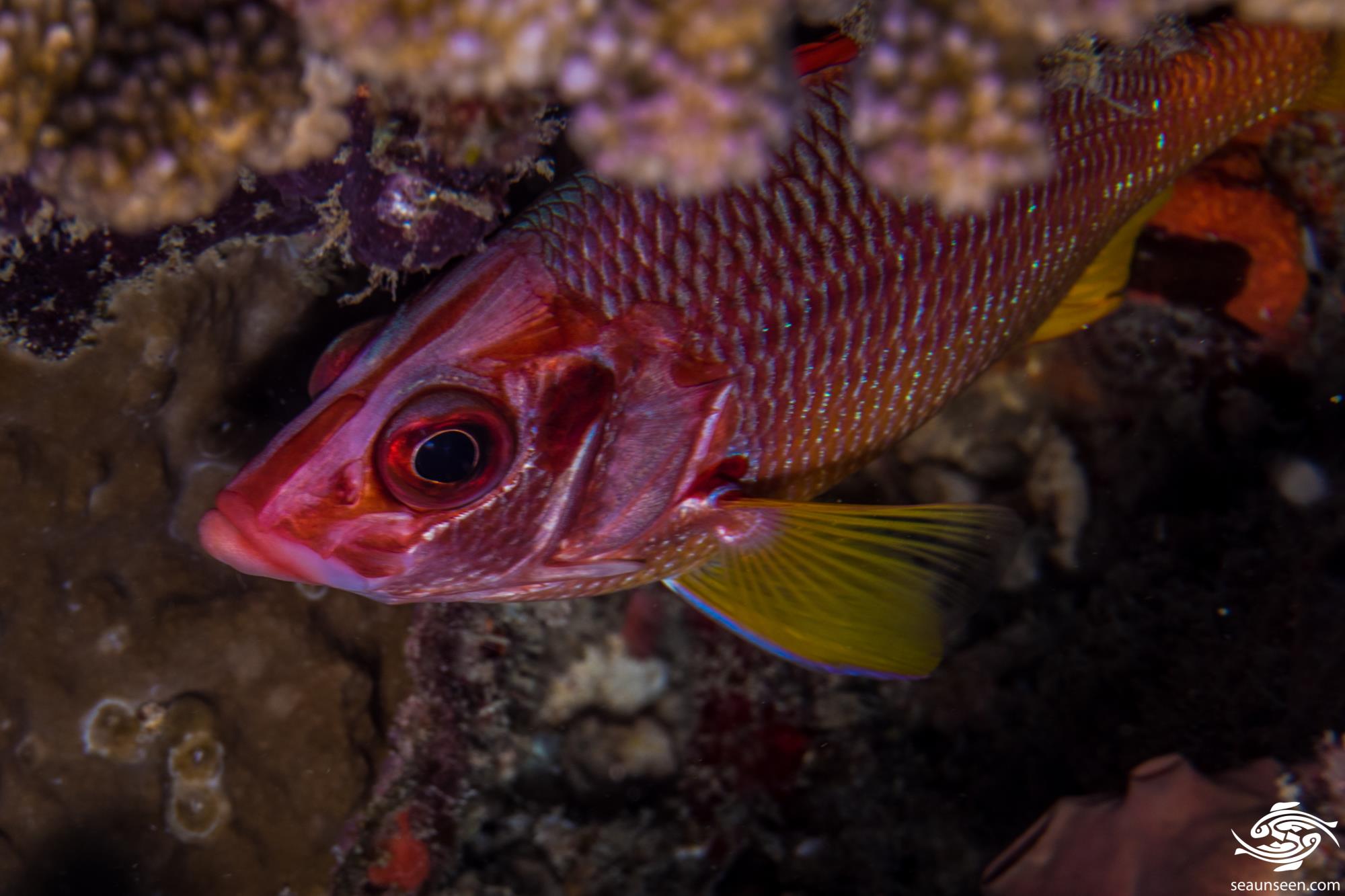 The Saber squirrelfish are nocturnal feeders , feeding on small fishes and benthic invertebrates such as shrimps and crabs. 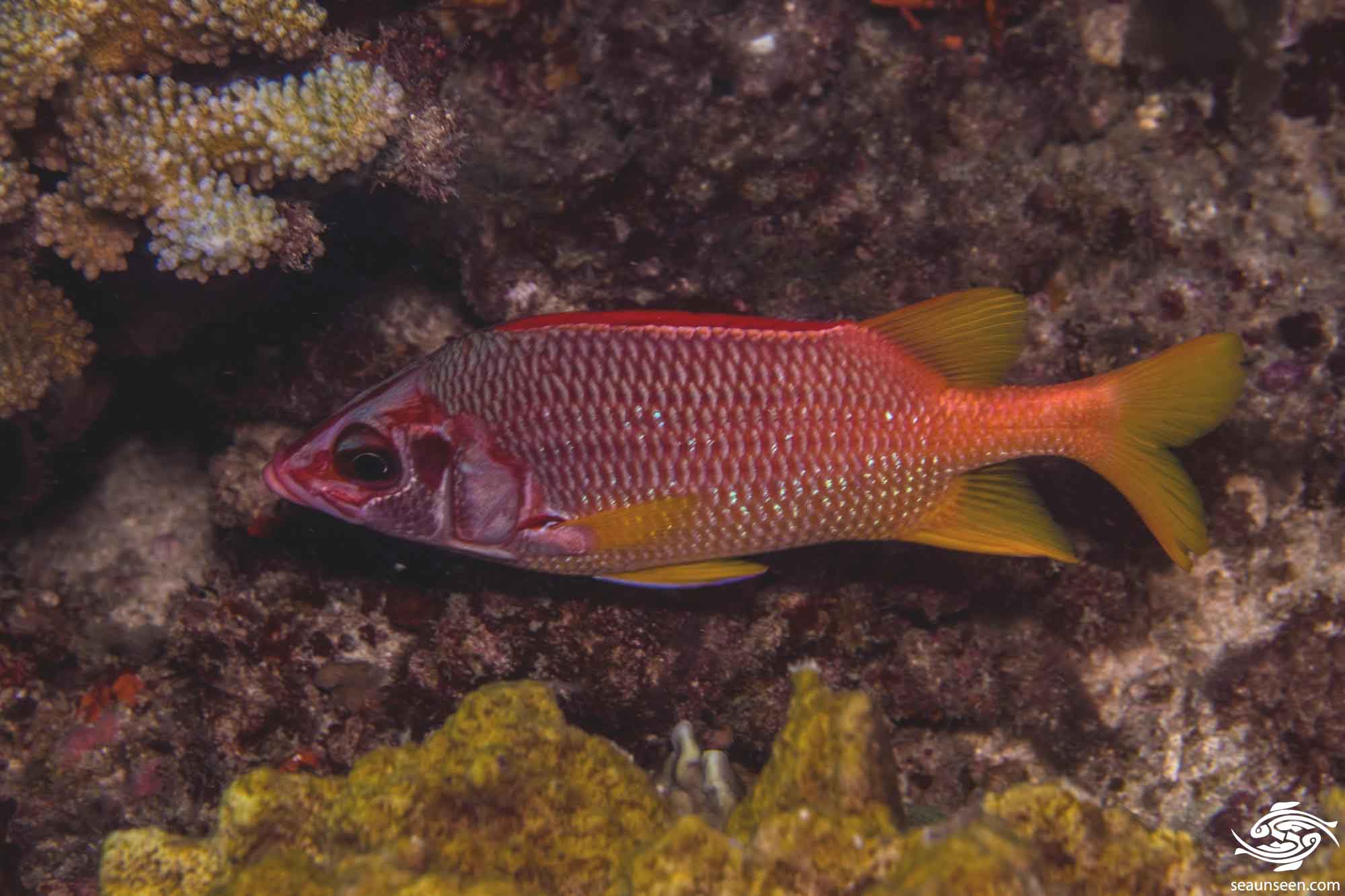 Spawning takes place into the water table and once the eggs hatch the young go into hiding. Little seems known of their mating habits. There is some interesting research which seems to indicate that the larvae detect coral reefs through their olfactory senses. 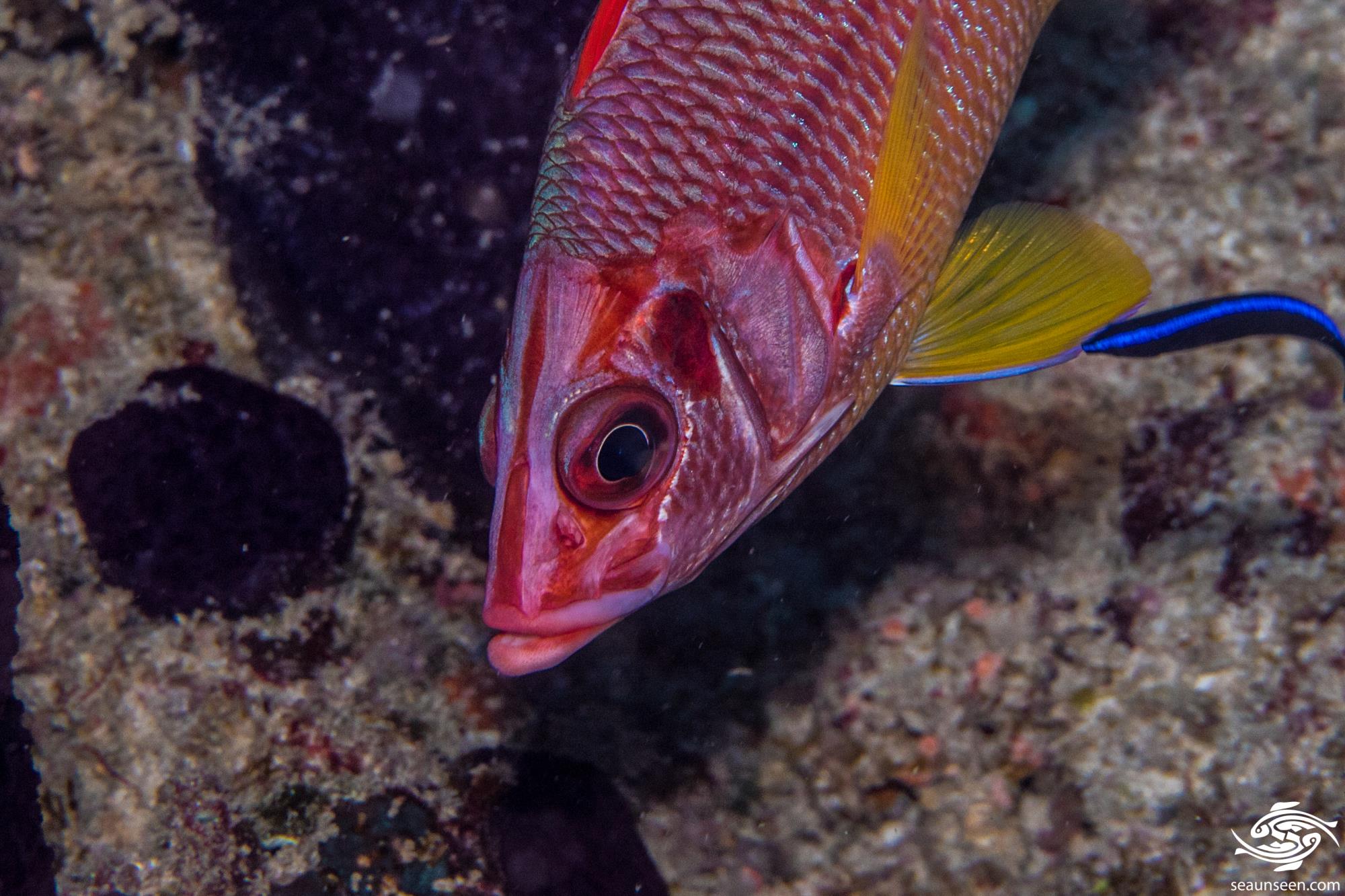 They are not exploited commercially in Tanzania but may be eaten by subsistence fishermen. A study in Egypt in the Red Sea showed that they had fairly high heavy metal concentrations in the gills and liver, but within internationally accepted limits.