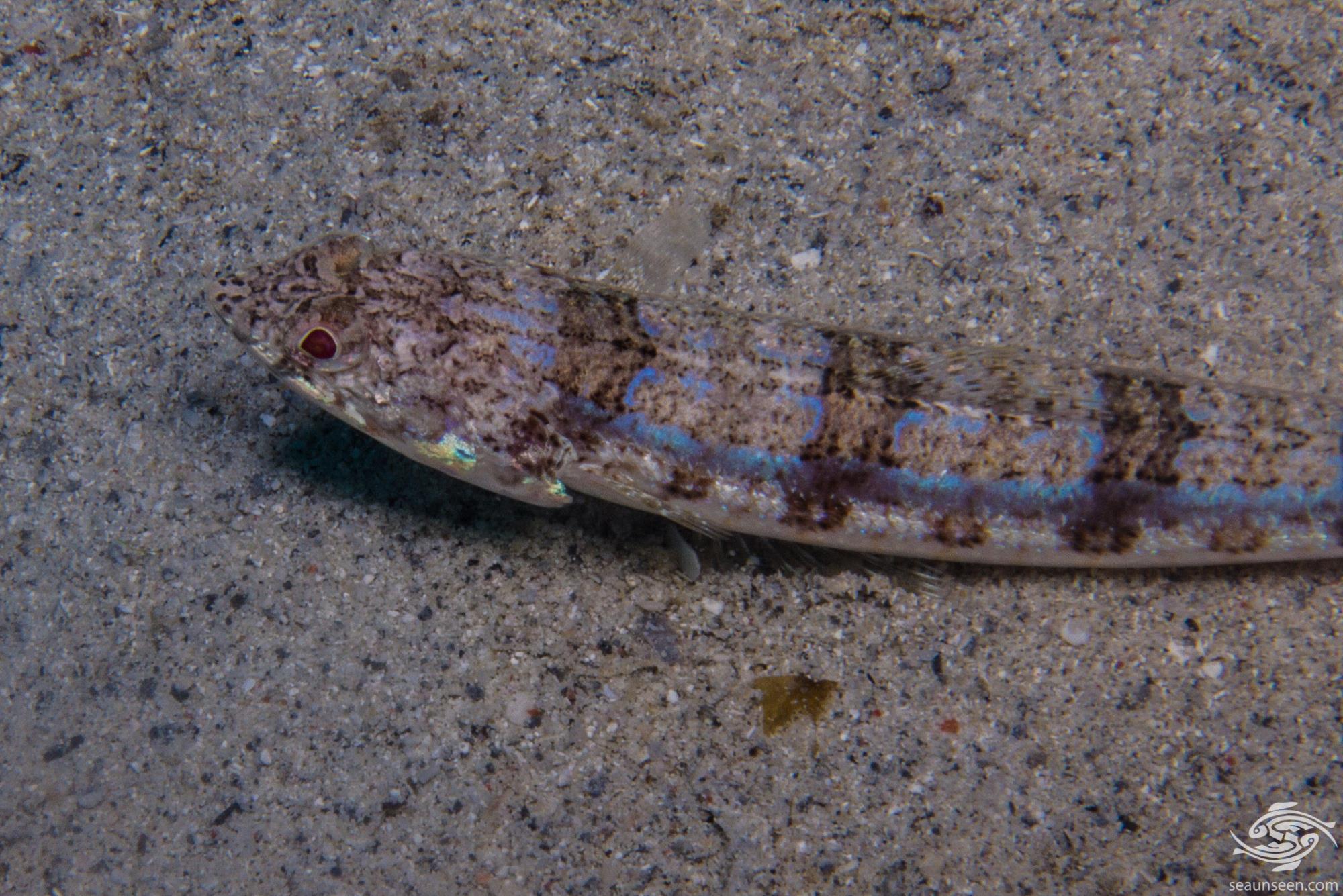 The Sand lizardfish (Synodus dermatogenys) is also known as the Clearfin Lizzardfish and the Banded Lizzardfish. They are often confused with the Variegated Lizardfish (Synodus variegatus) but are notably different in looks and the habitat that they are found in. Lizardfish are so named because their long tapered body and head resemble a lizard.

Sand lizardfish have a typical elongated lizardfish body, the upper body is rounded and the underside is flattened allowing them to sit low on the sand. The head and mouth resemble that of a lizard and are slightly pointed to the nose going back to the rear of the jaws which are the widest part of the body.  The body tapers back towards the tail and the background colour is a light brown colour that matches the bottom.

There are several darker brown bars across the top of the upper body and immediately below each of these bars on the lower body there are a series of circular darker brown patterns. Most specimens in Tanzania have a light blue line running along the mid body and on the top of the nose there are usually a series of brown dots. They have rows of teeth around the mouth which allow them to latch onto their prey. 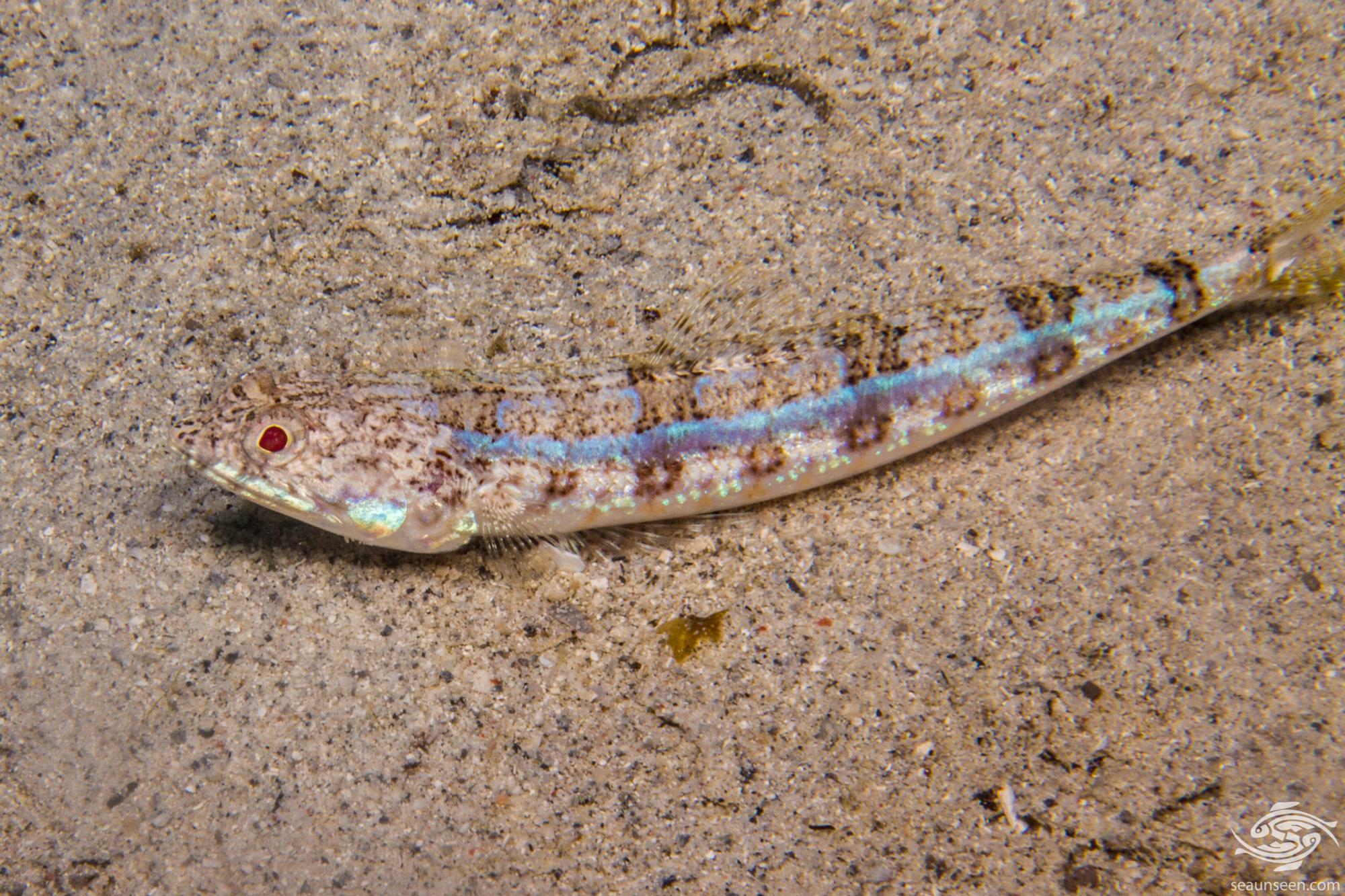 SAND LIZZARDFISH IN THE WILD

The Sand lizardfish is fairly common in Tanzanian waters and as their name implies they are commonly found on sandy areas between the reef and alongside it. Sometimes they will dig themselves into the sand to further aid their camouflage and only the head is seen partially protruding. They are mainly seen singularly but on occasions pairs are seen together. They are ambush predators and rely on their camouflage while waiting  on the bottom without moving and scan the waters above for unsuspecting passing prey.  When prey passes above them they make a fast upward dart, usually attacking prey from behind and below.

Sand Lizzardfish are known to biofluorescence, when luminated by blue or ultraviolet light they reflect a different color back. This is thought to aid in camouflage and may possibly also be used to display communication on the fertility of a particular individual. 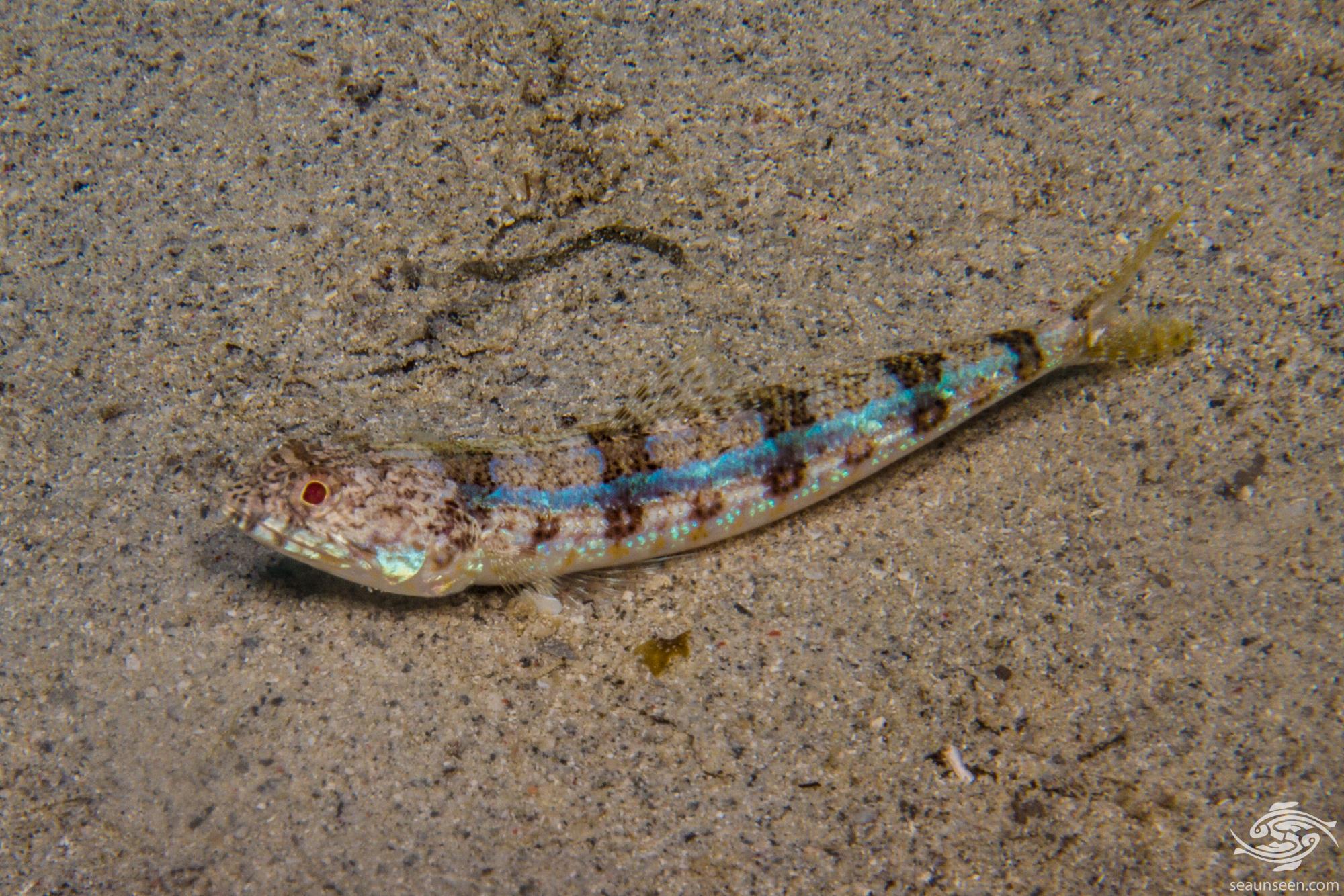 The Sand lizardfish is found across the tropical Indo Pacific area. They are found on sandy areas alongside coral and rocky reefs from depths of 5 meters to 50 meters. 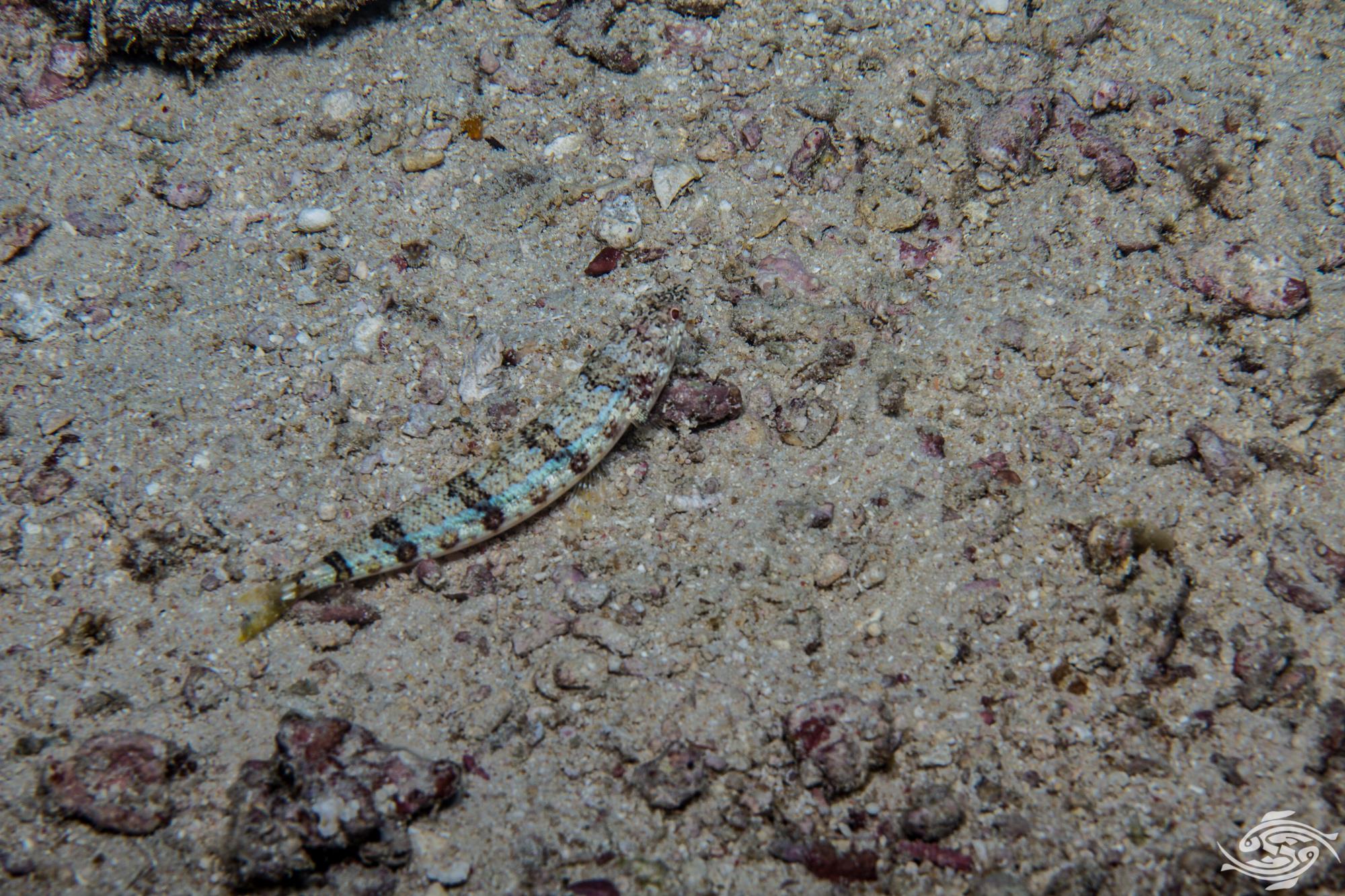 The Sand lizardfish are ambush predators and will eat any passing fish or crustacean that they can fit in their mouths. They remain motionless on the substrate and wait for prey to pass above them. The prey is often swallowed whole in one very fast motion but larger prey is gripped with their teeth and swallowed slowly. 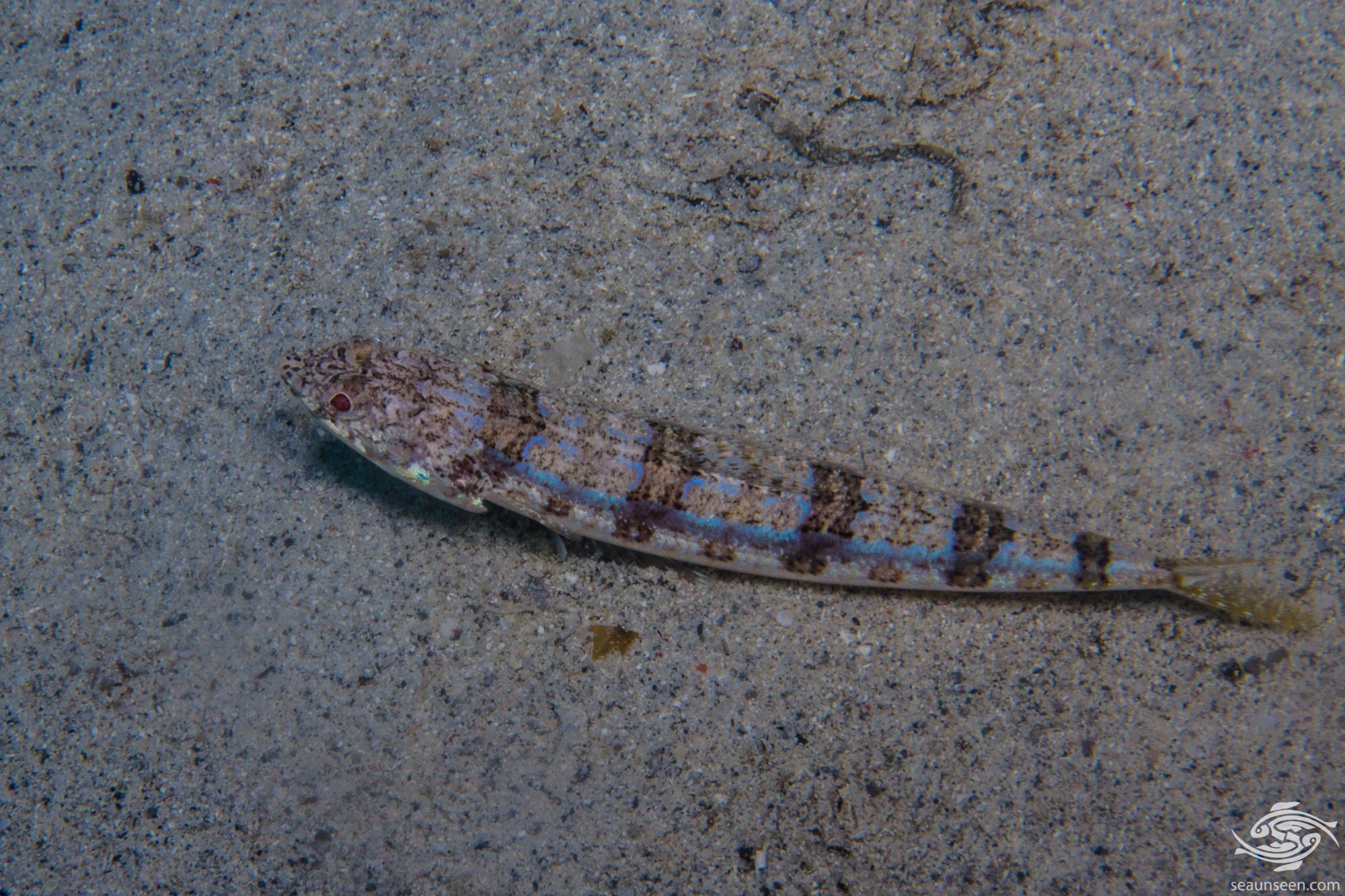 Very little seems to be known of their mating habits however they probably follow the mating habits of other Lizzardfish. Mating takes place between two specimens. They are sometimes seen in pairs.

Sand Lizardfish are sometimes kept in some public  aquariums but because they will eat anything that fits in their mouths, they are seldom kept by  aquarists.