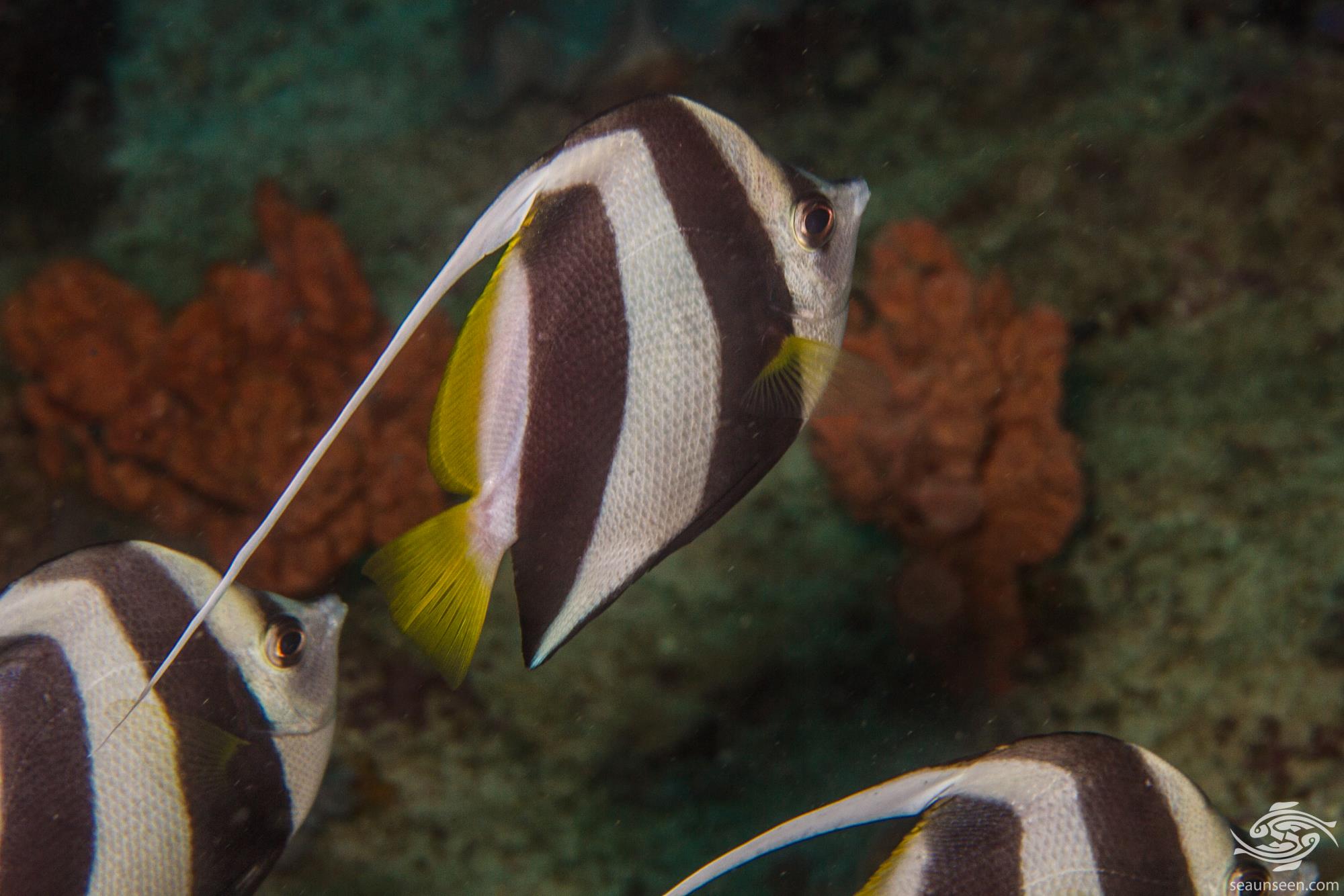 The Schooling Bannerfish (Heniochus diphreutes) , is also known as the coachman or pennant bannerfish. They are sometimes called the poor man’s moorish idol by aquarists as they are more affordable than the Moorish Idol and easier to keep. Bannerfish are close relatives of the butterfly fish, being in the same Family, Chaetodontidae. They very closely resemble the Longfin Bannerfish (Heniochus acuminatus)which are slightly larger, have a more pointed snout and a black bar between their eyes. 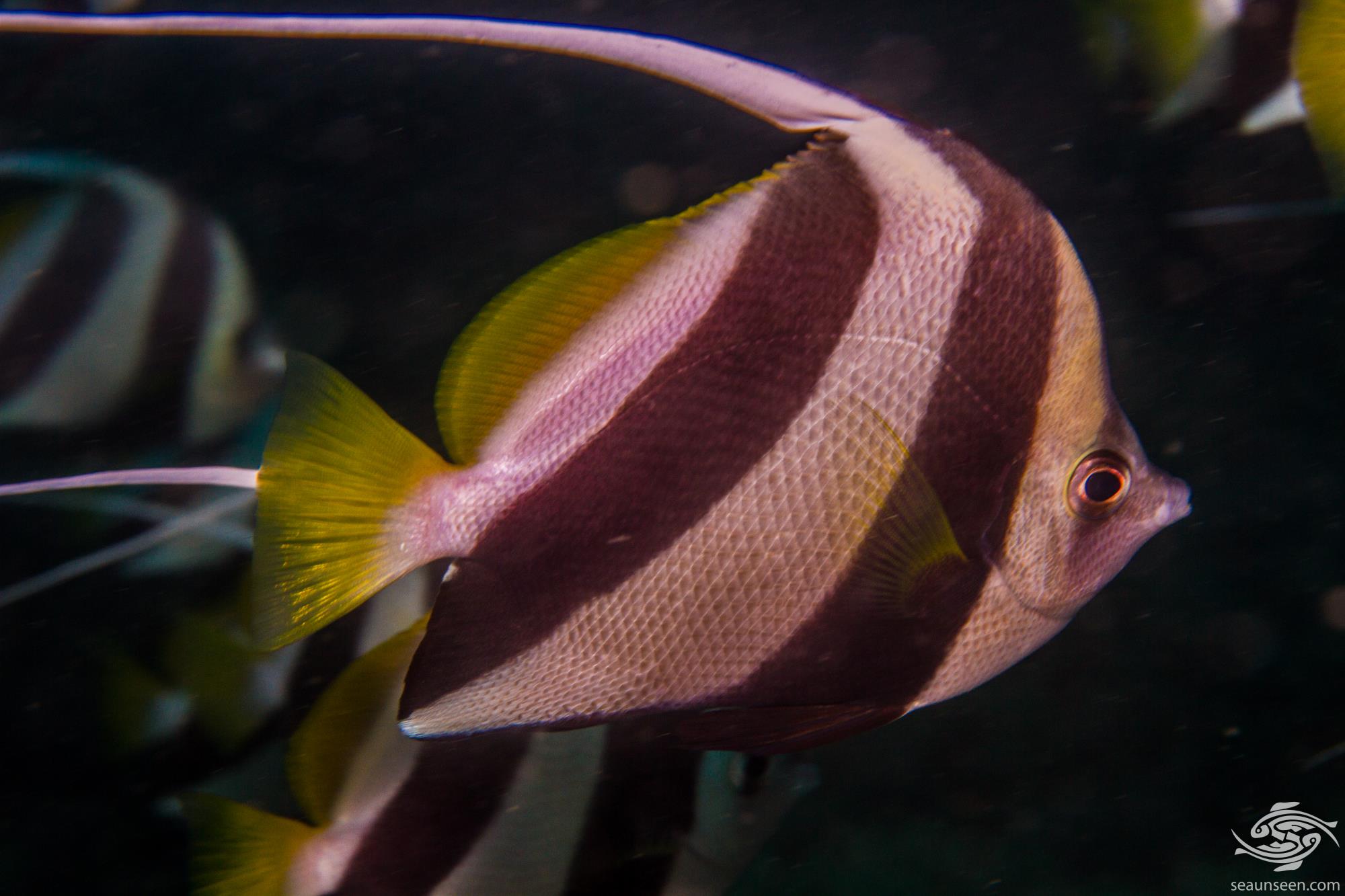 Schooling Bannerfish have a white body with two black oblique bands, yellow dorsal, tail and pectoral fins and a triangular mark above and between the eyes. The second Oblique band on the body ends on the point of the dorsal fin. The dorsal filament which is white, grows as the fish matures and trails behind the fish when it swims. Juveniles and adults are very similar to each other. Many people confuse them with the Longfin bannerfish Heniochus acuminatus pictured below which has a slightly larger body. 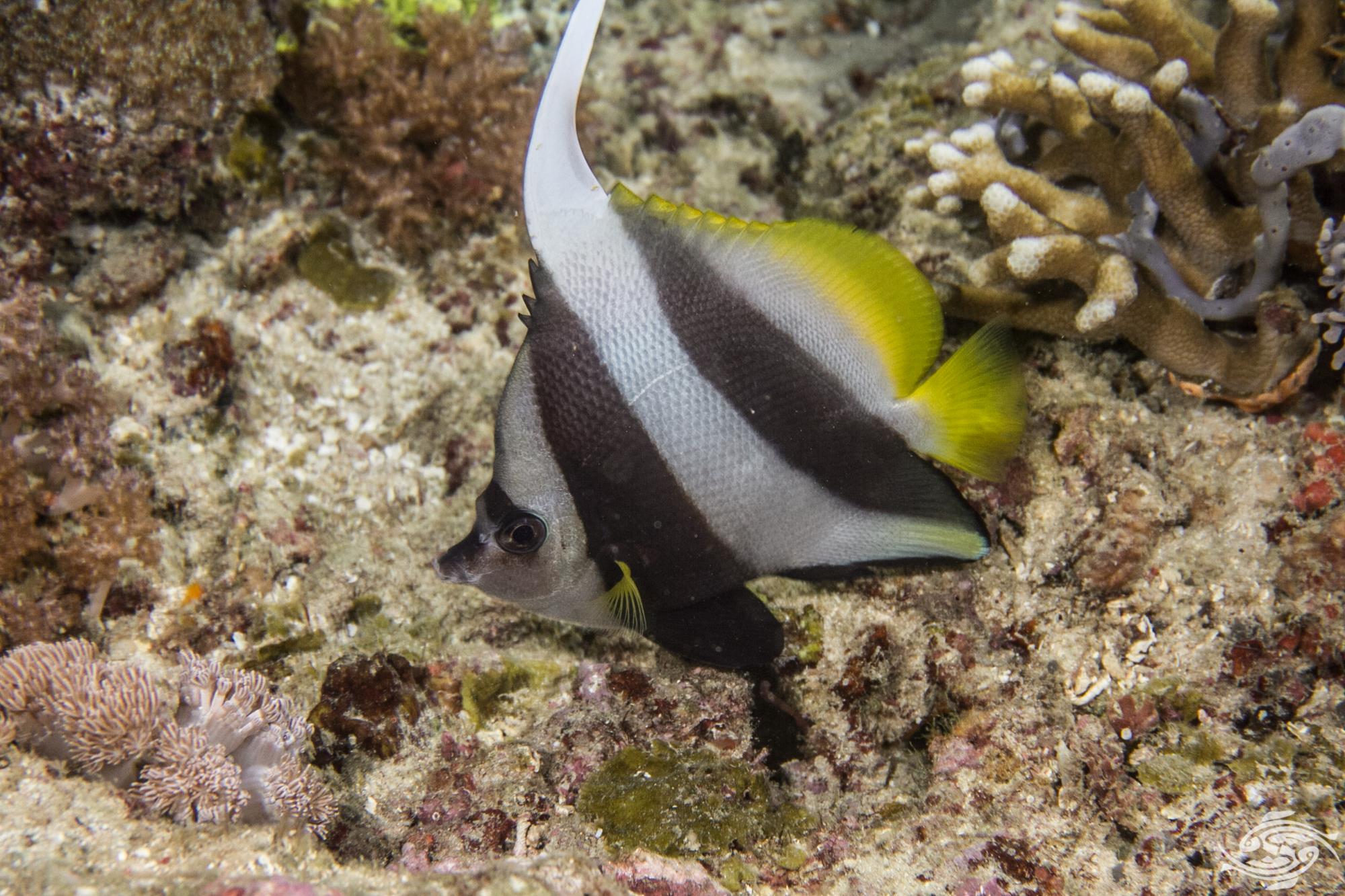 The Schooling Bannerfish can grow up to 20 cm in length and are attractive looking fish. At night their colors darken and they go a dark grey color on the white bands. Once a light is put on them they quickly change back to their daytime colors. The process takes around a minute. 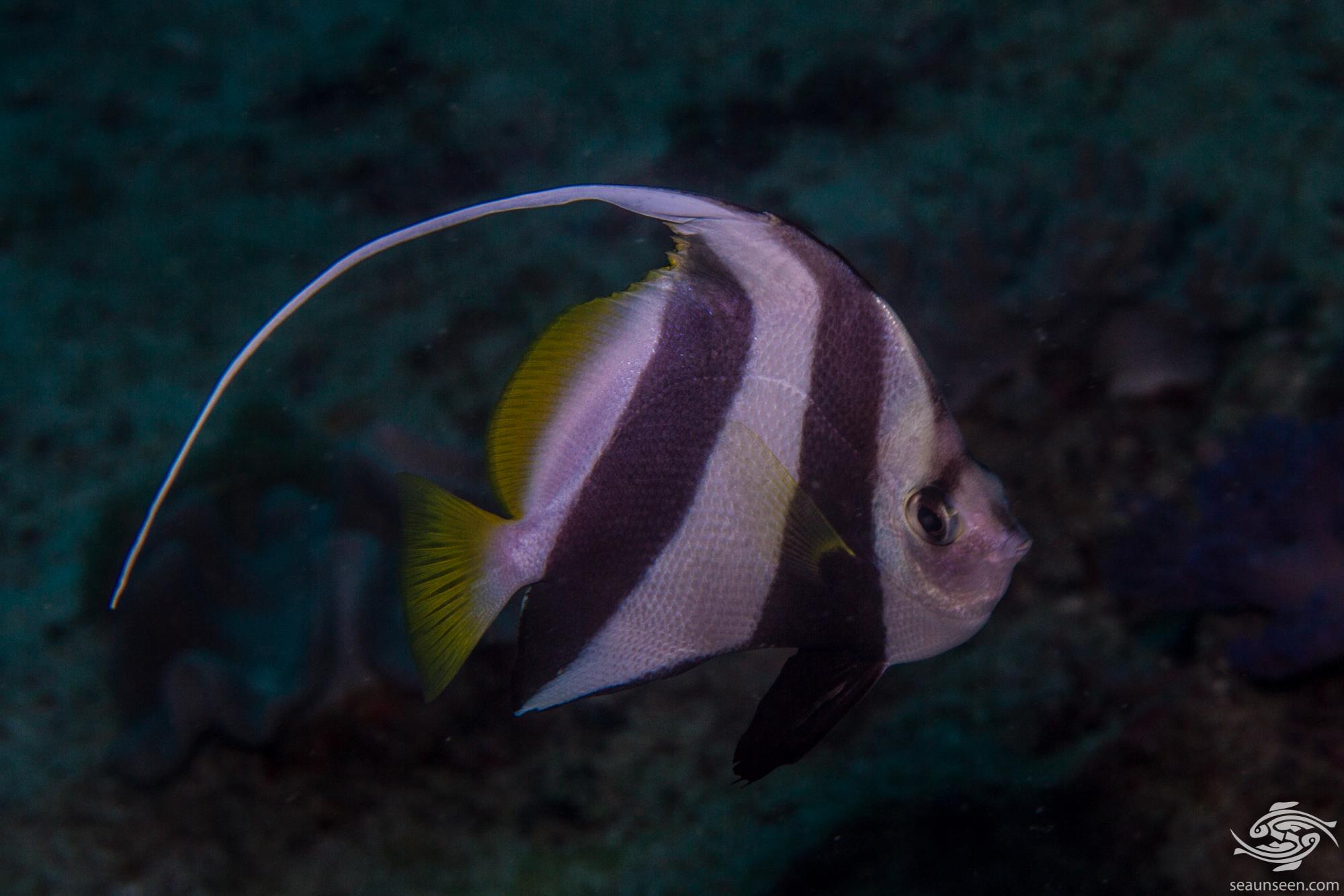 SCHOOLING BANNERFISH IN THE WILD

They are very friendly fish and will more often than not approach a diver and swim around him with no fear. They seem to be territorial because the schools are often seen in exactly the same spot. In Dar es Salaam there is always a shoal just above the south of Big T Wall in more or less the same spot.  The Heniochus Genus  have been documented making use of acoustic behavior,  using muscular movements to twist the body and deforming the swim bladder to produce sounds. The sounds are thought to be used to defend territory. 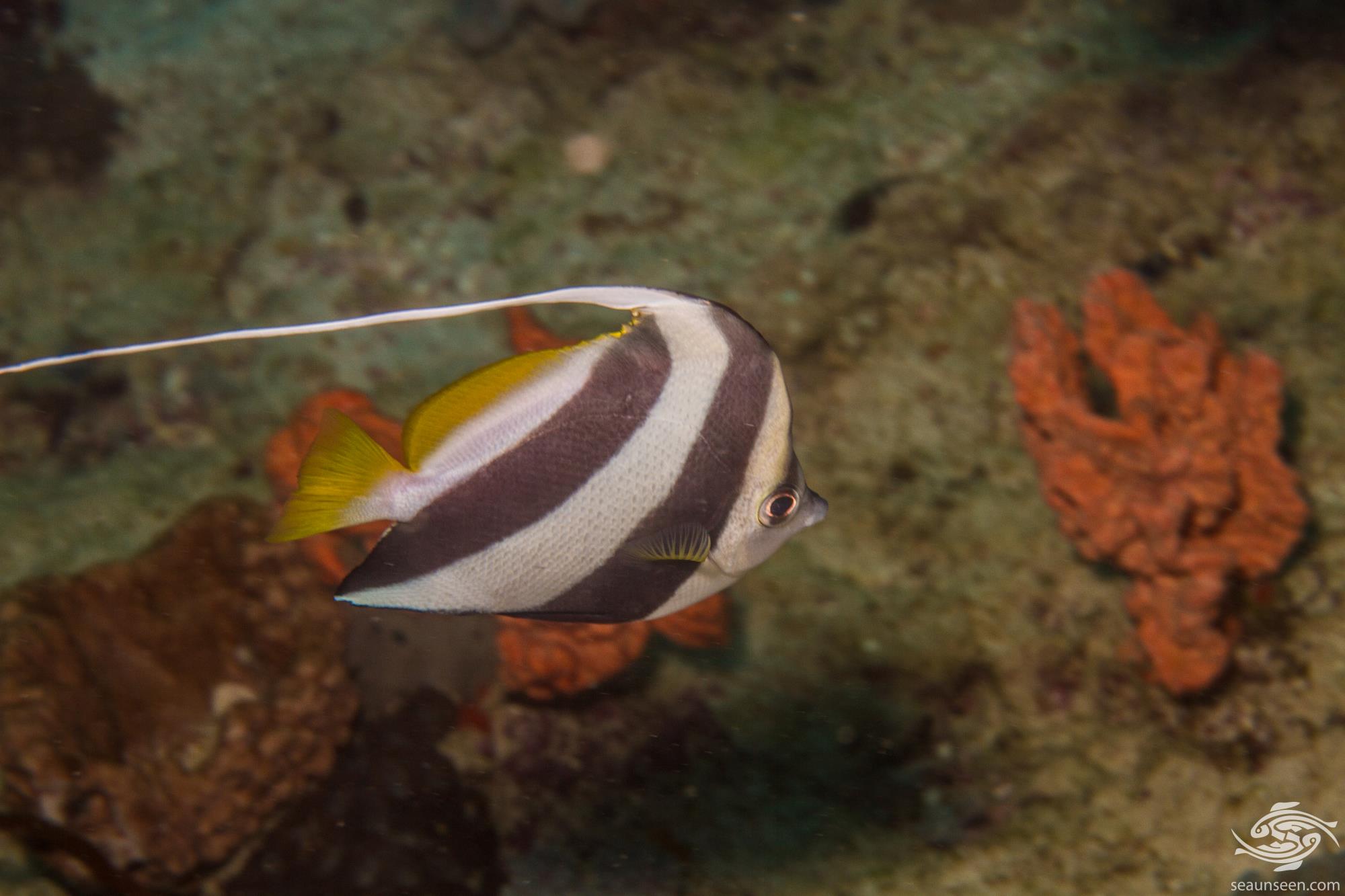 Schooling bannerfish  are found on the East coast of Africa from south of Durban to the Red sea and eastwards to the mid Pacific . Juveniles are sometimes found close inshore in rock pools and they are found around jetties, in harbors and on offshore reefs to a depth of 75 meters. They are relatively common reef dwellers. 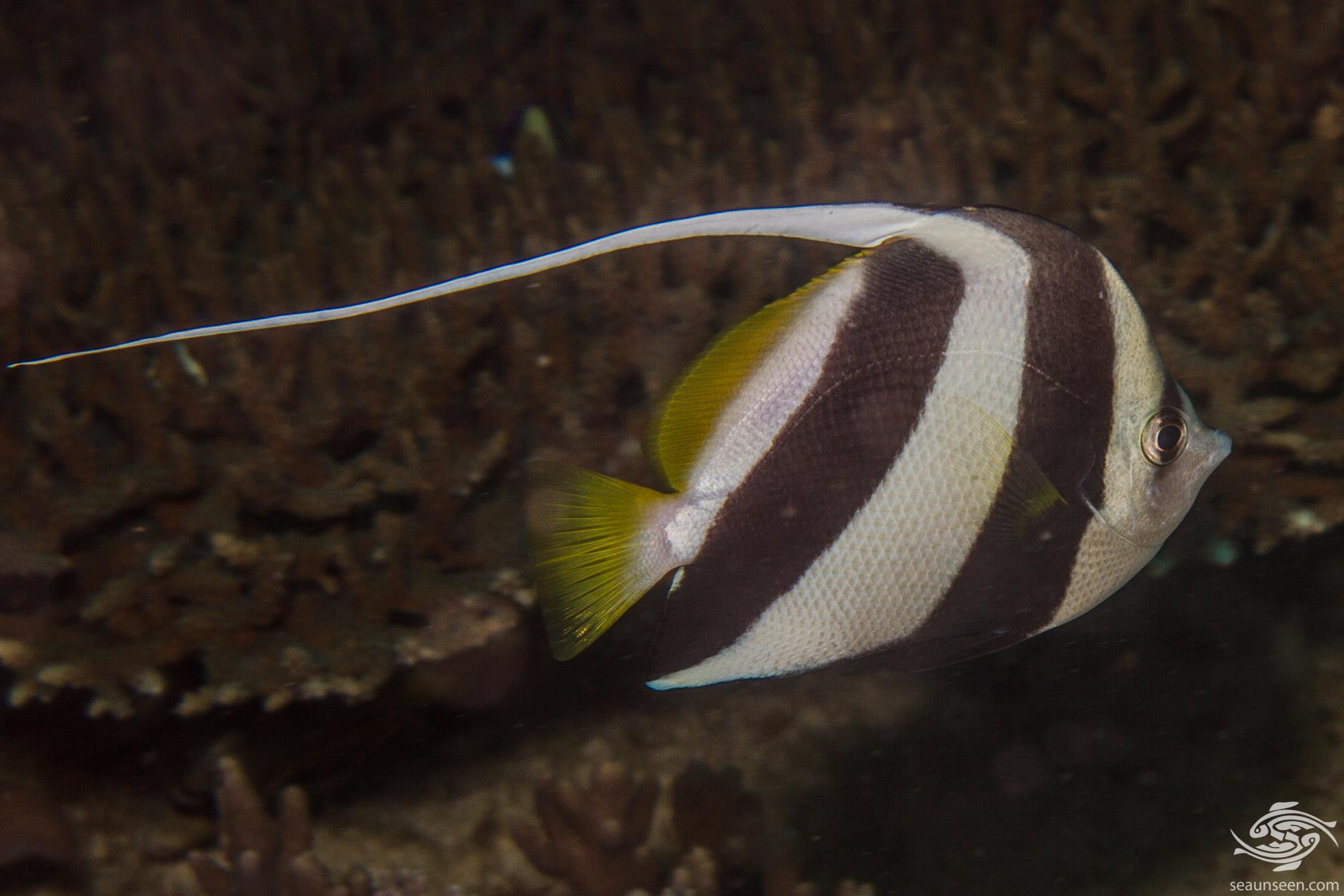 Schooling Bannerfish are planktivore’s and their diet consists of various types of plankton. 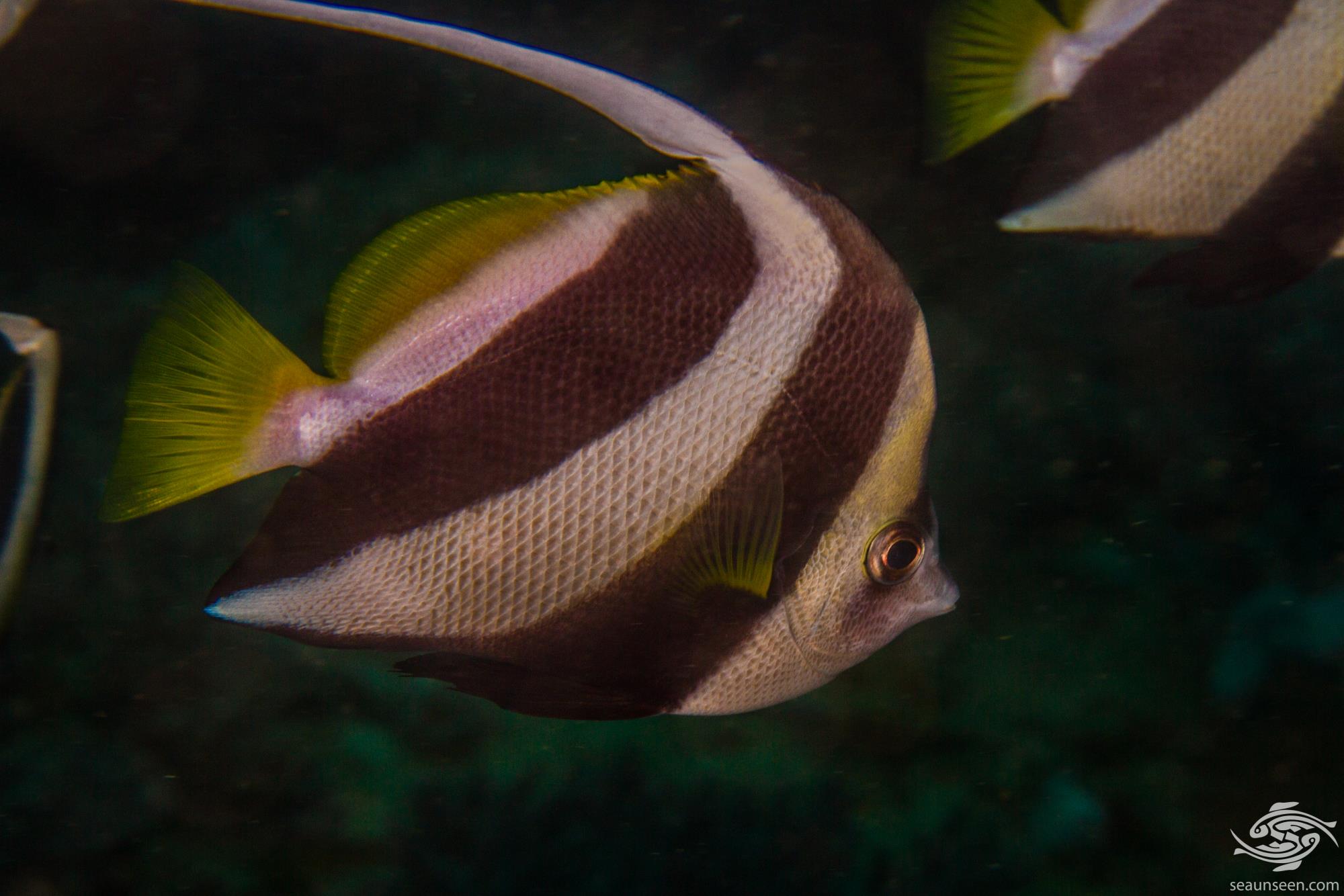 Schooling bannerfish have been raised in captivity to 41 days and hopefully in the future will be captive bred. They are thought to spawn seasonally in pairs and the eggs larvae and fry are thought to drift with the current before swimming to the bottom. The larval stage is extremely complex and images can be seen here. Some advanced aquarist’s are attempting to induce spawning in tanks with temperature changes. 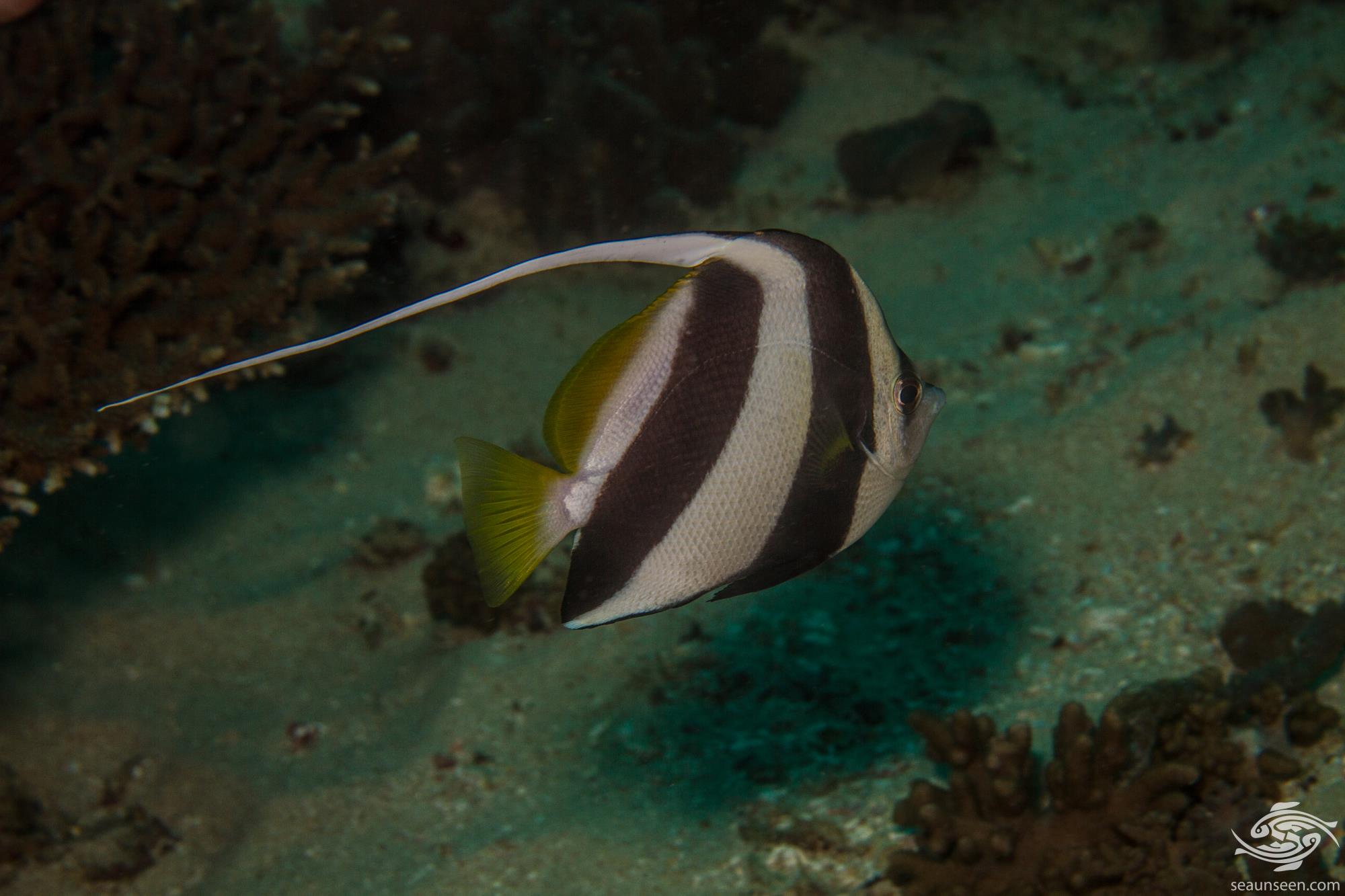 Because of their bright coloration these fish are kept in aquariums and are relatively hardy fish being much easier to keep than their close relatives the butterfly fish and their look alikes the Moorish Idol. They will readily accept most floating foods and are not that difficult to look after. They are suitable for intermediate level aquarists onward.

Because of the size they grow to they need a relatively large tank with overhangs and caves to hide in. Tangs and other aggressive fish species may bully them. Being planktivore’s they are regarded as reef safe. They are sociable fish and it is recommended that they be kept in three’s so as to prevent one fish from becoming too dominant.