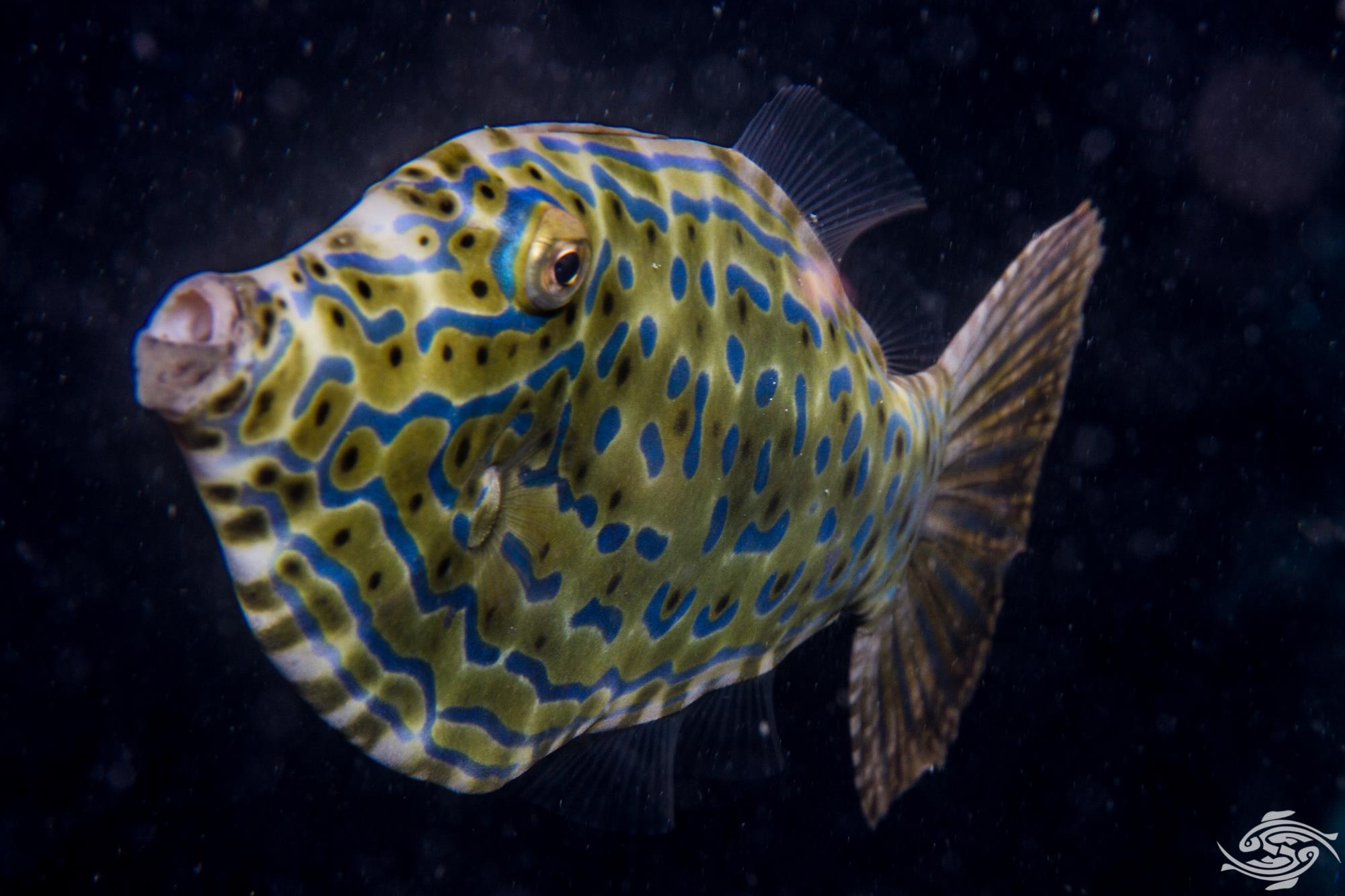 The Scrawled File Fish (Aluterus scriptus) is also known as the broomtail filefish or scribbled leatherjacket. They are unusual looking fishes and are capable of rapid color changes to blend into their local environment. 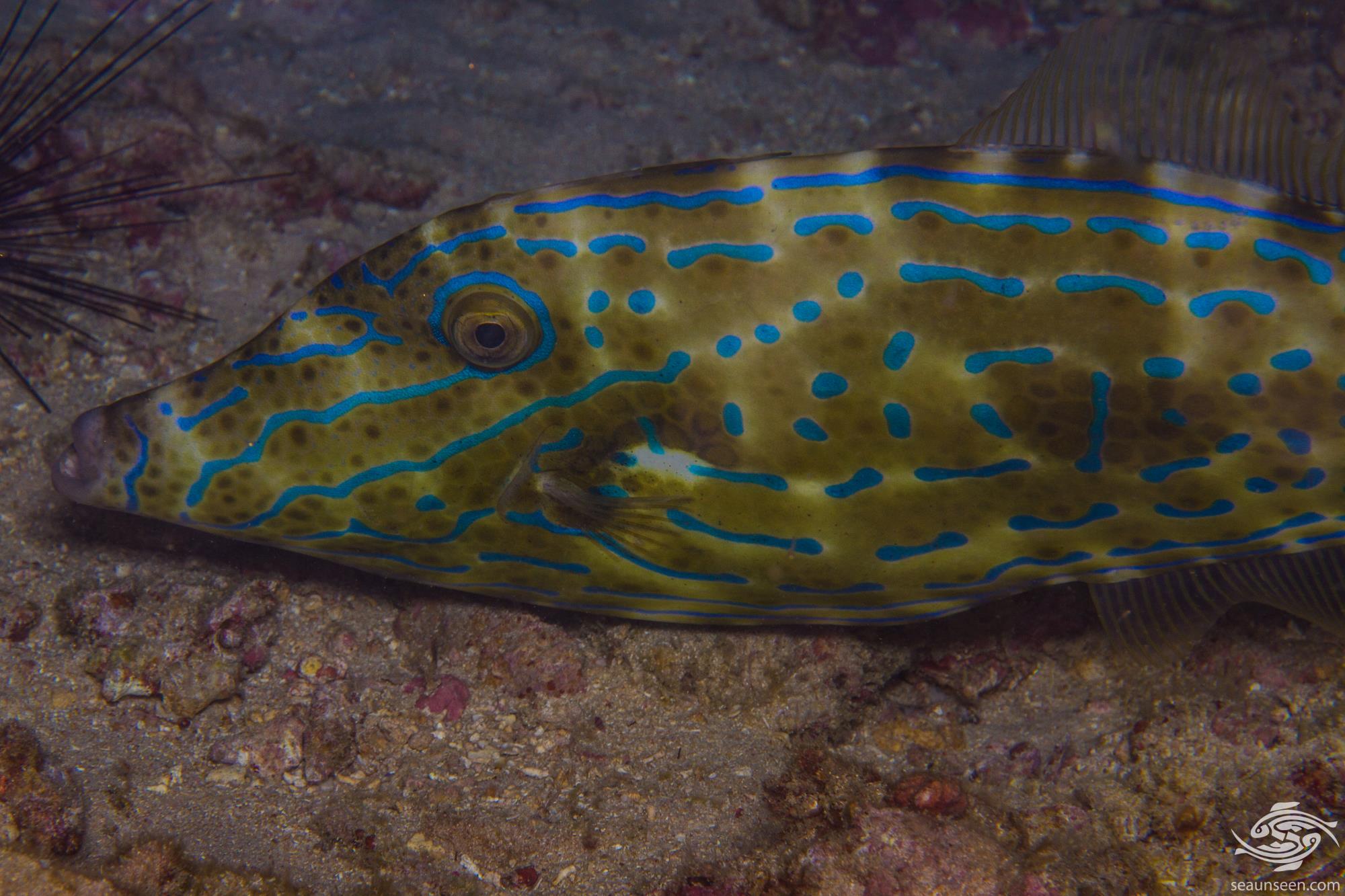 The body is fairly long and tapers towards the rear into a proportionally large tail which is often furled,  hence one of its local names being the Broomtail Filefish. The mouth which is proportionally small is slightly upturned. The scales are small and very rough, giving filefish their name. The body is highly compressed laterally and they are quite thin fish. The coloration varies greatly as they are able to change color to suit the surroundings.

On white sandy bottoms they are able to turn white to match the sand and use a similar coloration when swimming in deeper blue water which makes them hard to spot. Over reefs the color ranges from a yellow to a brown.  A series of  spots and squiggles is usually present across the body and these are often a shade of blue. They grow up to 110 cm in length. They have a long dorsal fin just above the eyes and when raised it is locked in place by a second smaller dorsal fin. 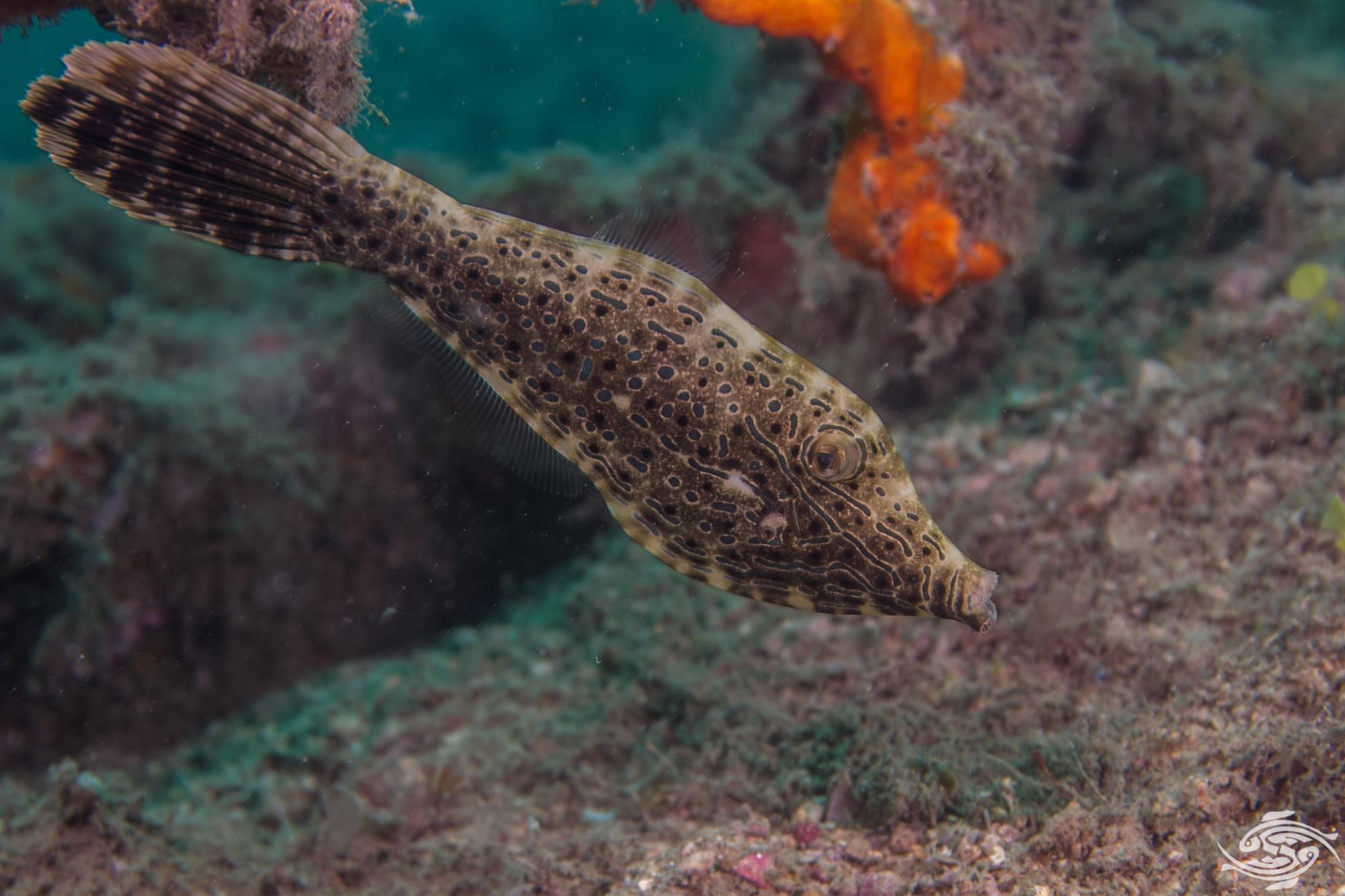 The Scrawled filefish is not a common fish and is not often seen but this may possibly be as a result of their excellent camouflaging abilities. Because of their ability to change their colors to match the background this can make them hard to spot. When they see a diver they will usually slowly move away. They have been seen feeding at night and juveniles are sometimes seen under flotsam. At rest they will flatten themselves up against a substrate and will match their color to the substrate. The one in the image below has matched its colors to the hull of a boat and as a result was difficult to spot.

The larger specimen in the images in the post was photographed at night feeding and seemed unperturbed by the divers, never attempting to move off and slowly moving over the reef in a head down position. 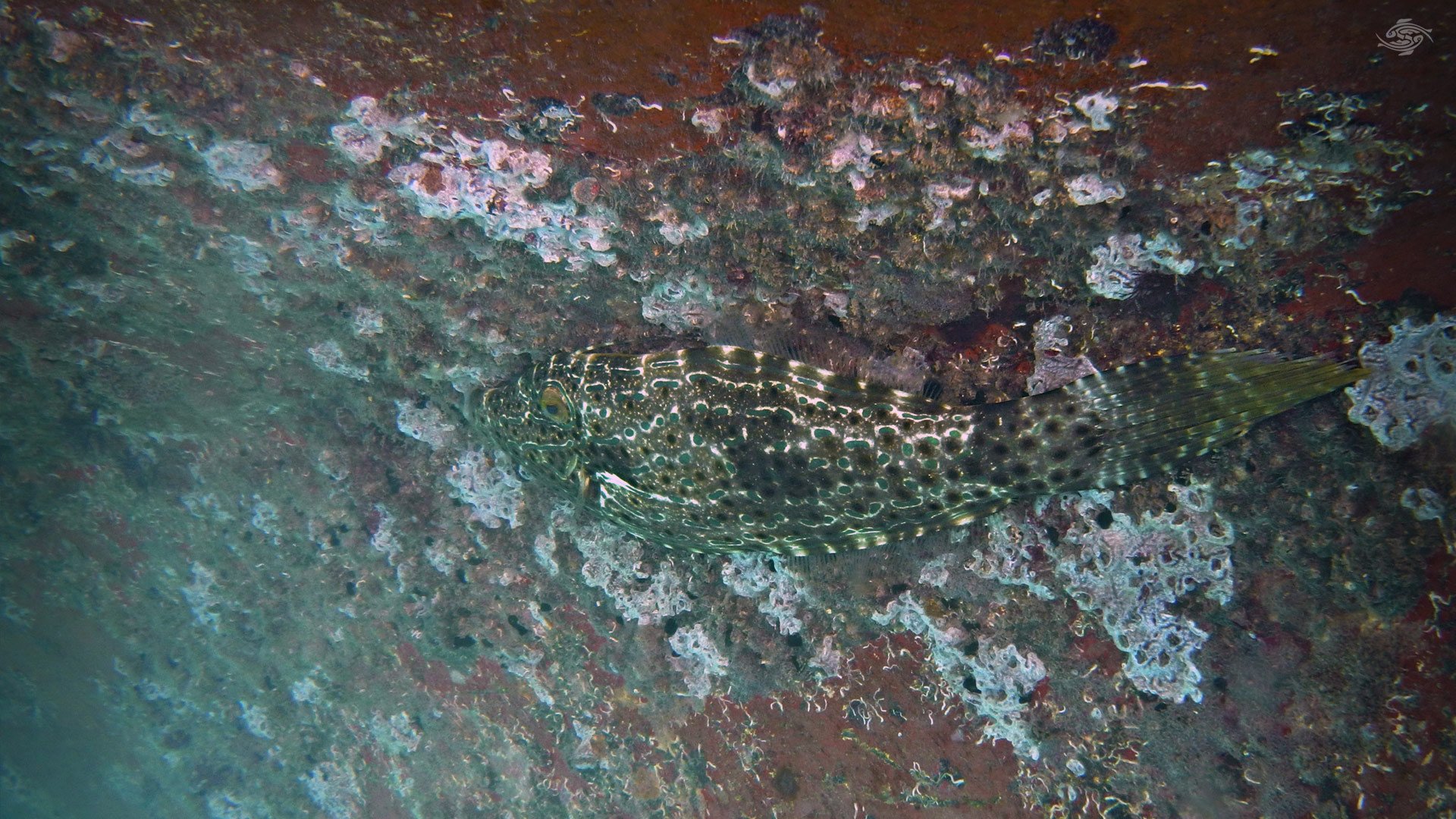 At night under dive lights and strobes the colors appear almost iridescent as can be seen below. 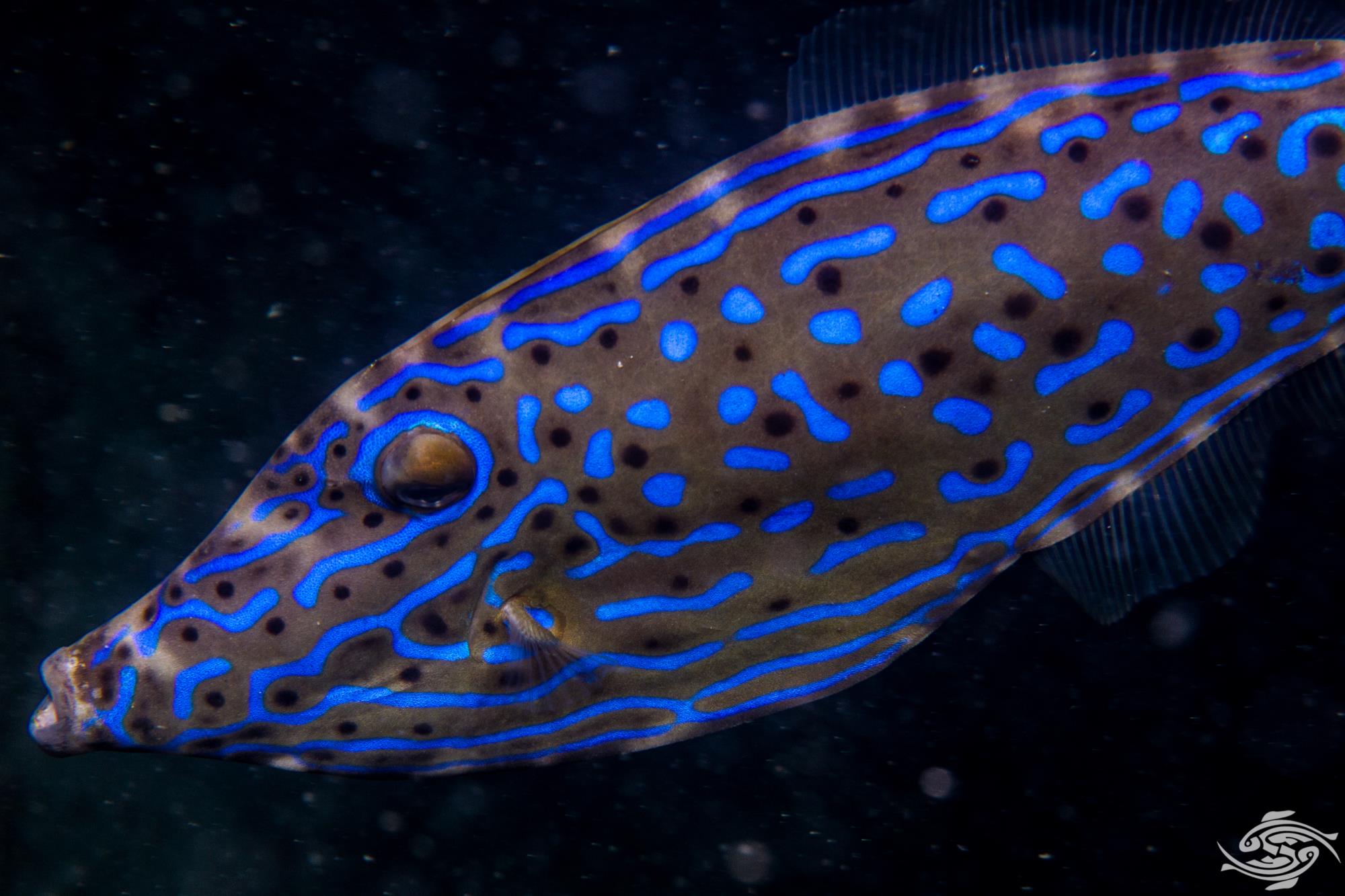 Scrawled filefish prefer moderately warmer waters and as a result are found in all the sub tropical and tropical areas of the world. They are often found in tropical lagoons and near reefs. 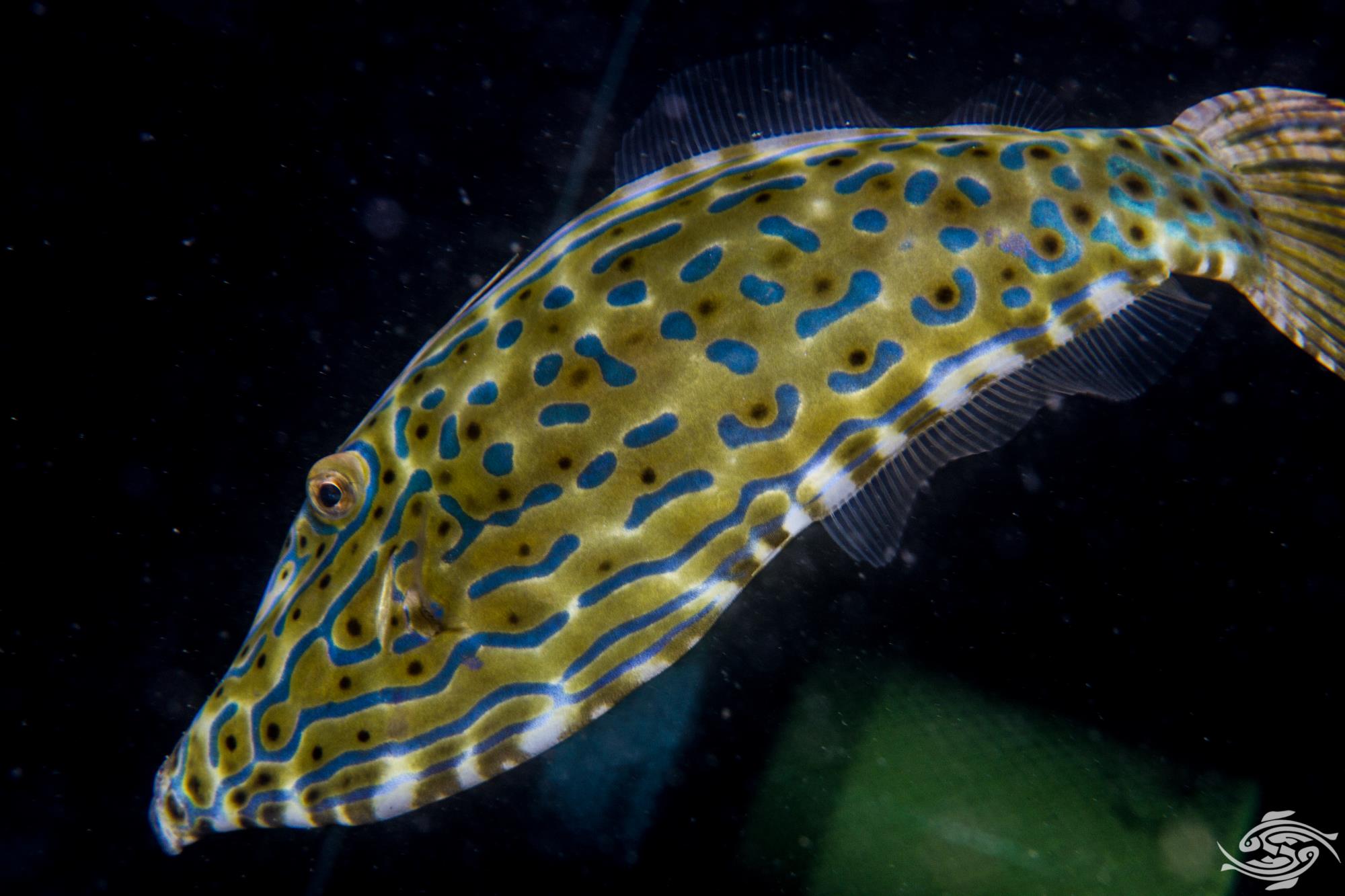 They have been observed feeding both at night and during the day. When feeding they are often in a vertical position, moving across the reef picking titbits of the reef. 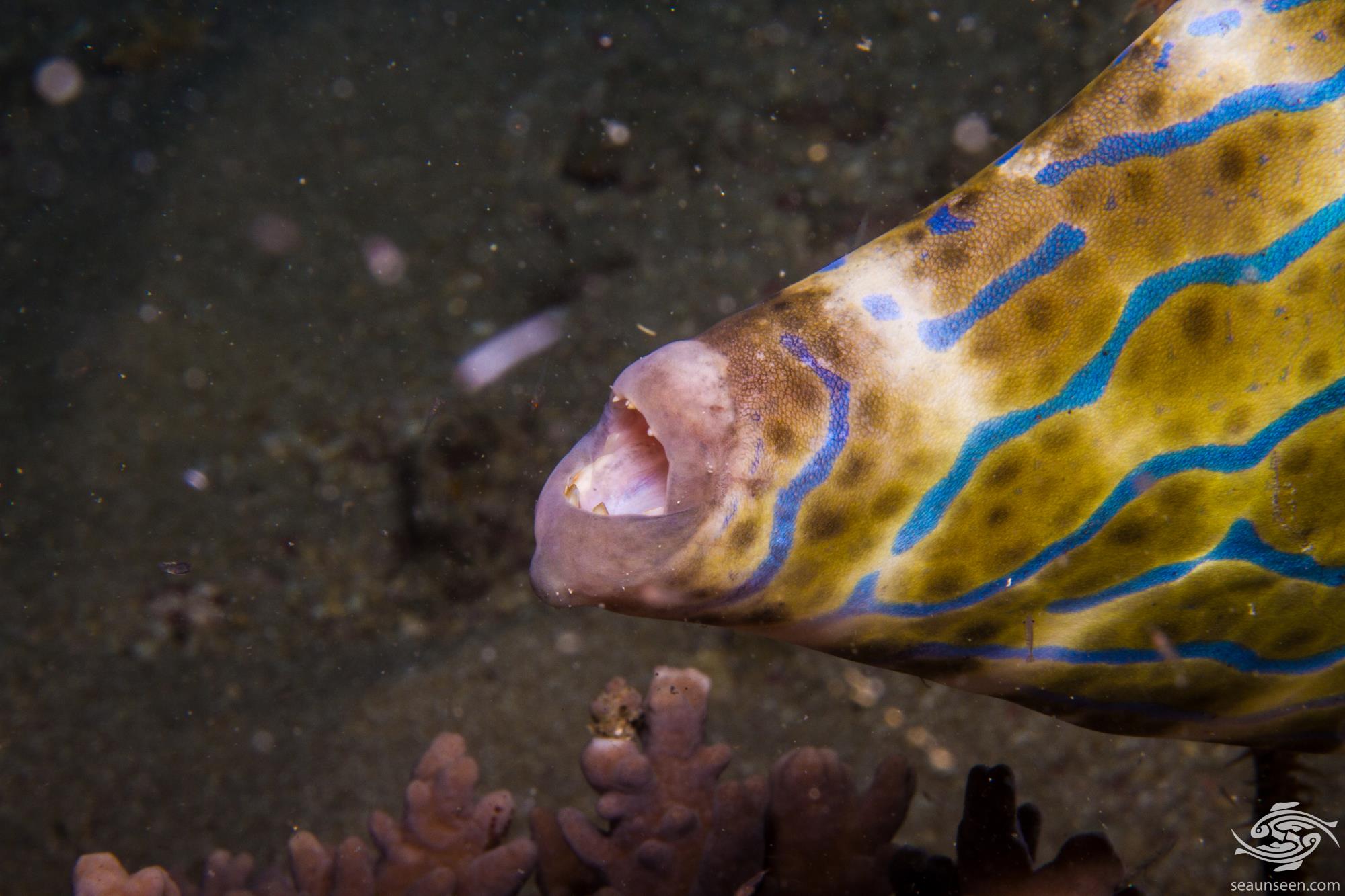 Their diet consists of algae’s, tunicates, hydrozoans, gorgonians and colonial anemones. The food is gripped solidly with the mouth and is then bitten off. As can be seen above their teeth are fairly sharp. 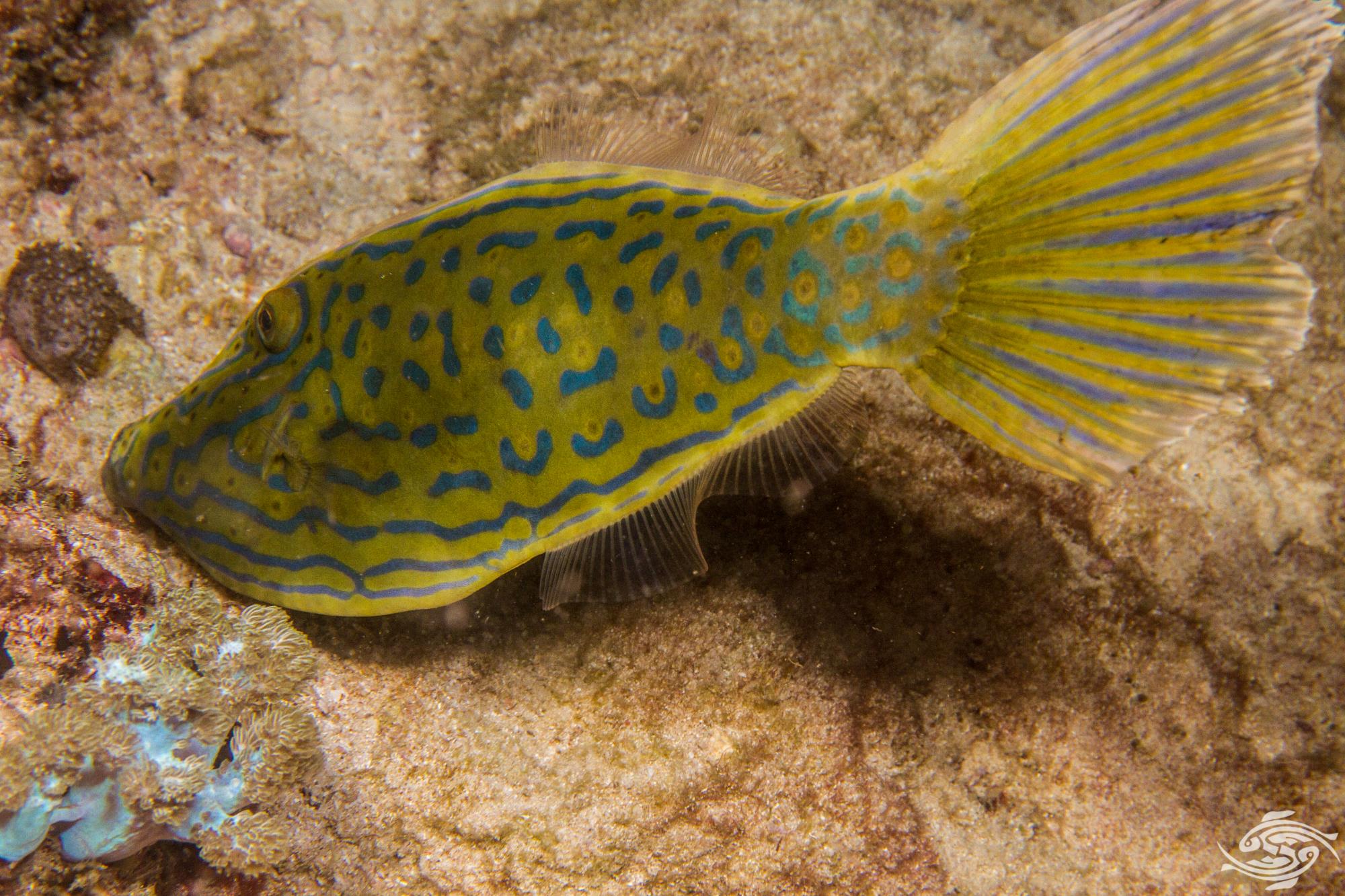 Breeding with filefish usually takes place between one male and several females. The females lay their eggs on the substrate and they are fertilized by the male. The eggs are then guarded by the female to prevent them from being eaten by predators. 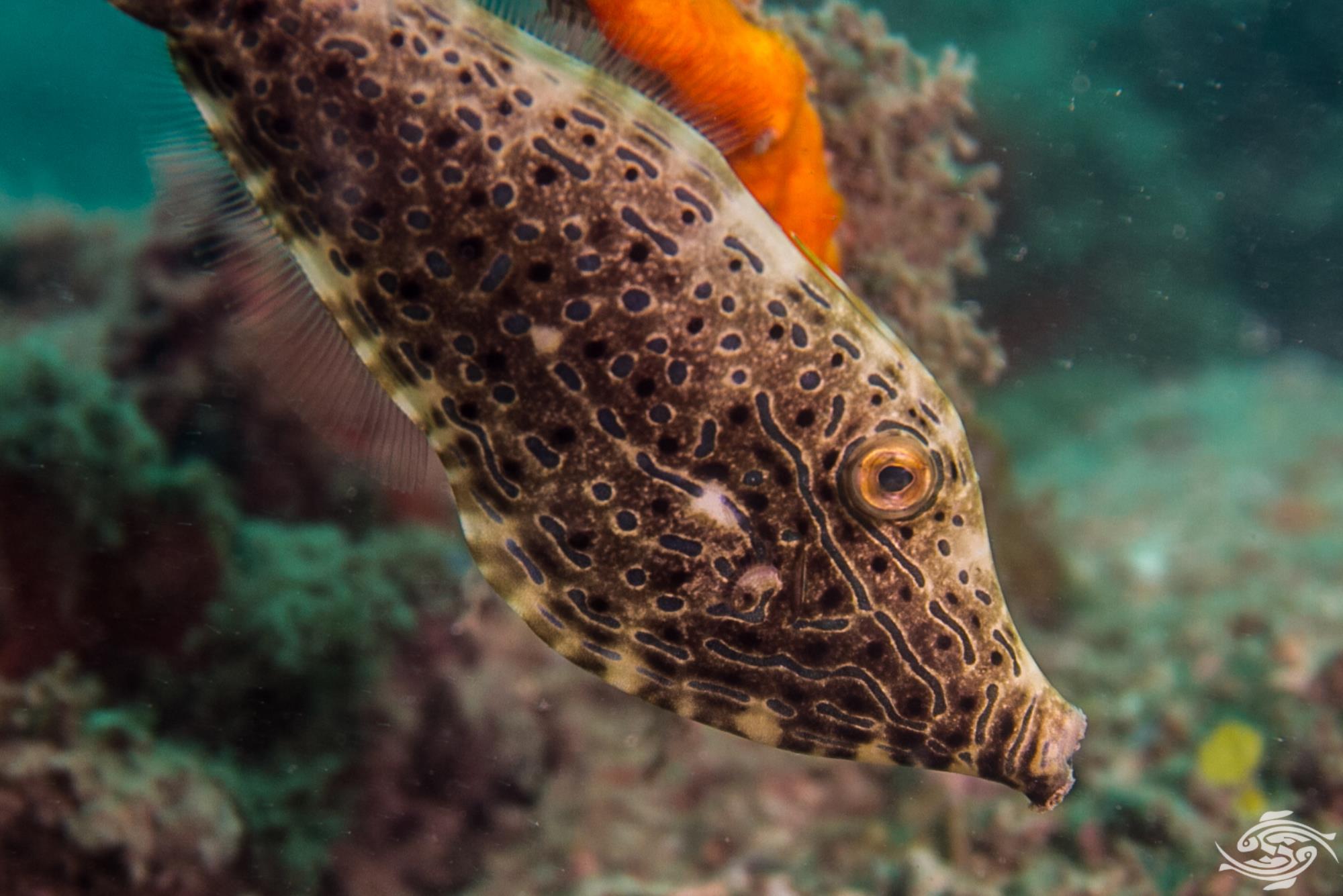 Because they are attractive unusual looking fish, Scrawled filefish are often seen in large tanks in public aquariums. As a result of the size they grow to, 110 cm, they are not often kept in private aquariums. 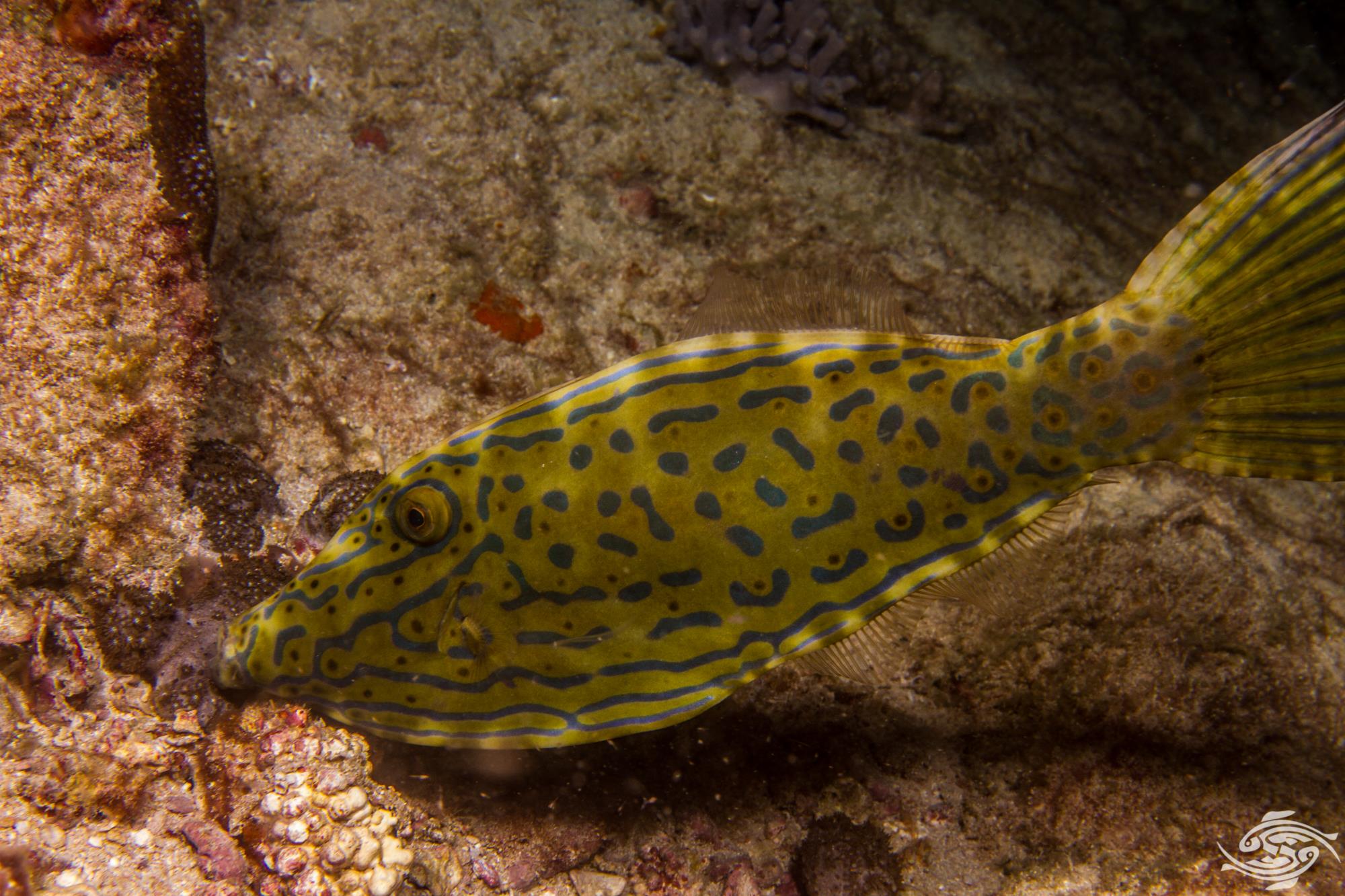