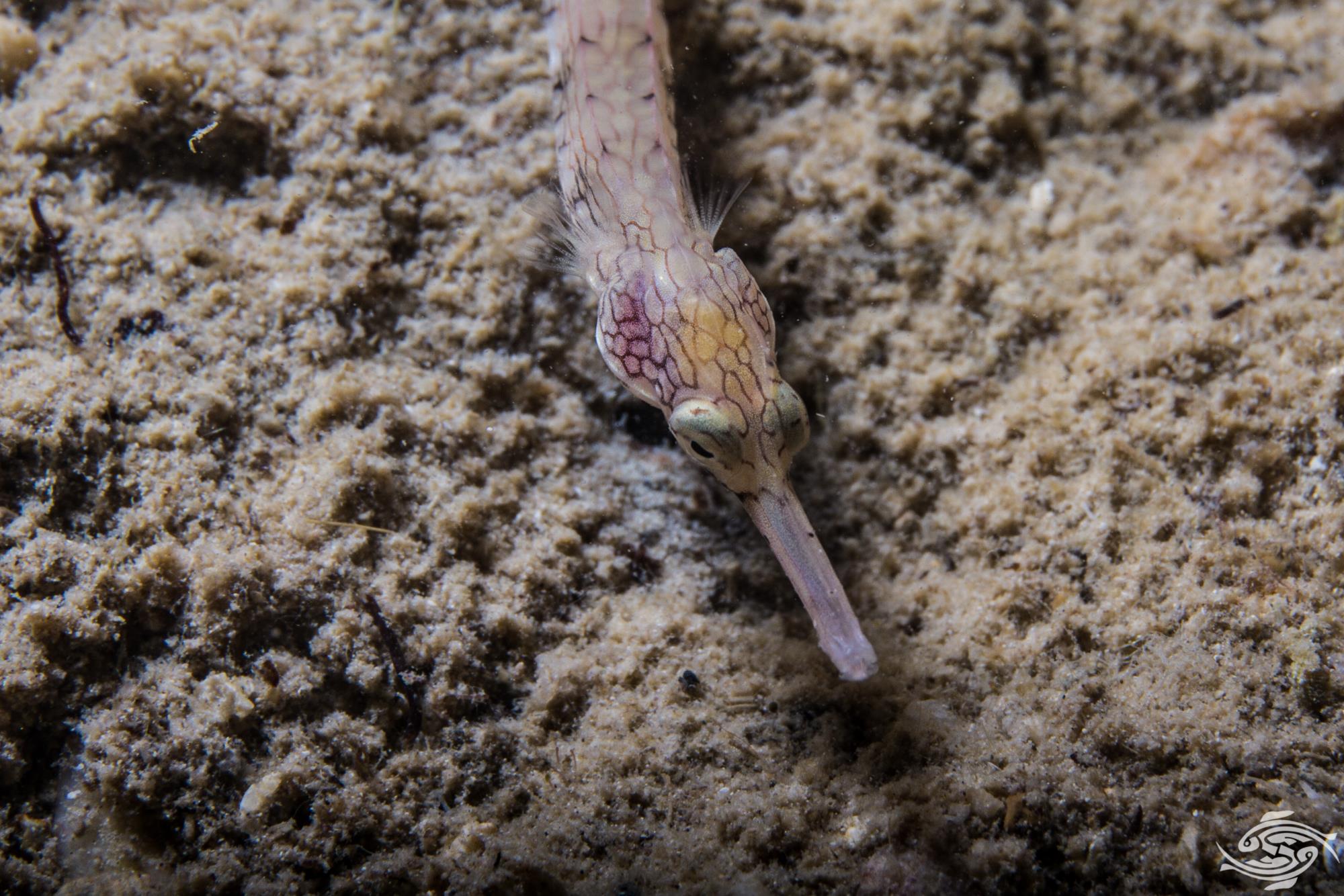 The Scribbled pipefish (Corythoichthys intestinalis) is also known as the Messmate pipefish and the Dragonface Pipefish. They are common inhabitants of the rubble areas between the reef and in the shallows on the Tanzanian coast. In Tanzania they appear to be far more active nocturnally than during the day.

The Scribbled pipefish has a long thin angular body comprised of armored plates. The body colour is whitish and there are a series of lines running down the body which in places join together to form darker patches. The dorsal fin is prominent and the nose is fairly elongated. The caudal fin is a light pinkish colour. In Tanzanian waters they seem to grow up to a maximum of 12-15 cm. 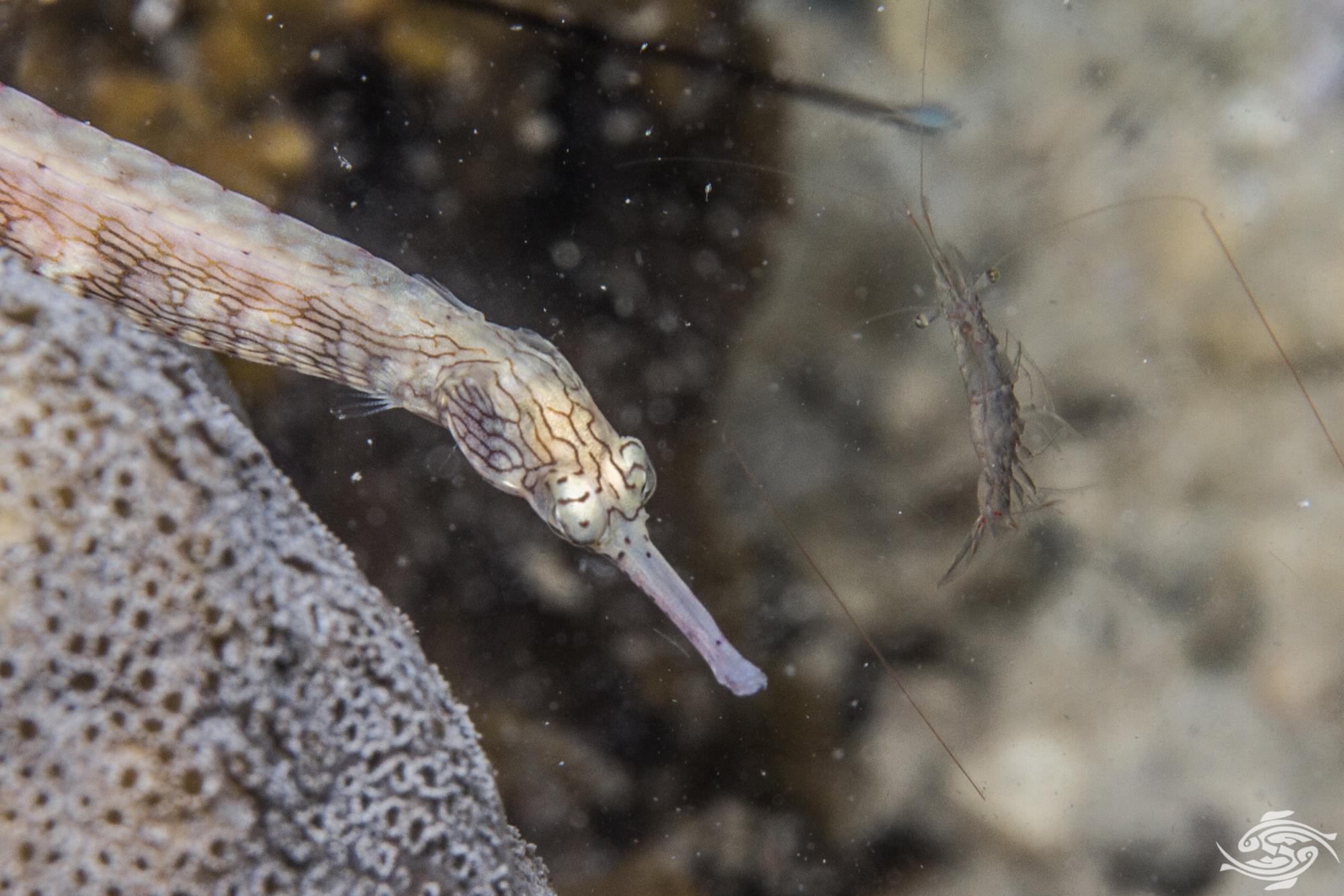 The Scribbled pipefish are usually seen on sandy areas and rubble between the reef.  They are seen out on occasion during the day, but at night there are larger numbers of them out. They are usually in pairs but occasionally one sees three together, always two females and one male. At night they are easy to observe and are not shy with lights on them. During the day they are hard to approach closely. 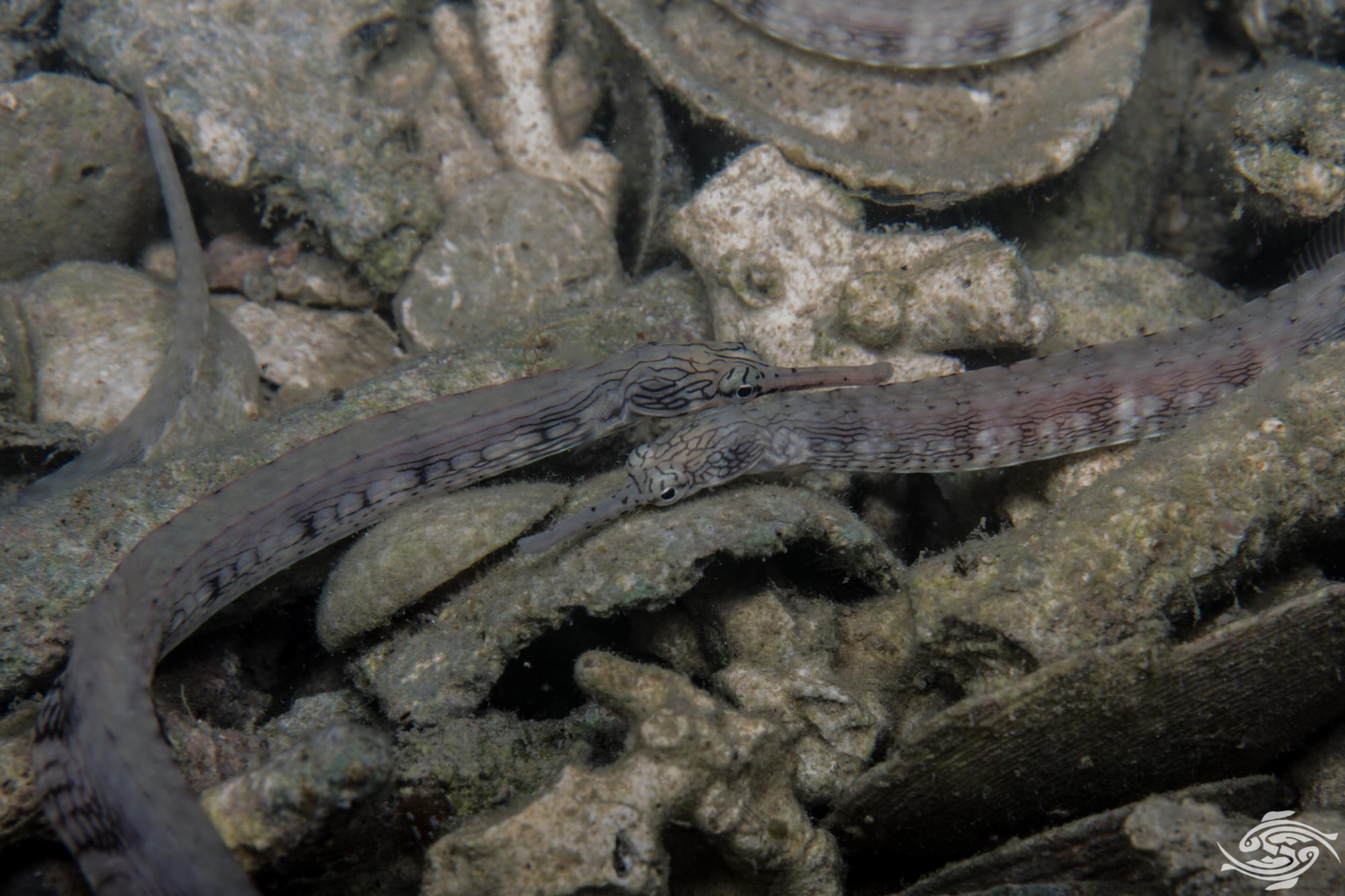 The Scribbled pipefish is found across the Indo-Pacific area . They are commonly seen from 1 meter to 8 meters on rubble areas, particularly those adjoining sea grasses. 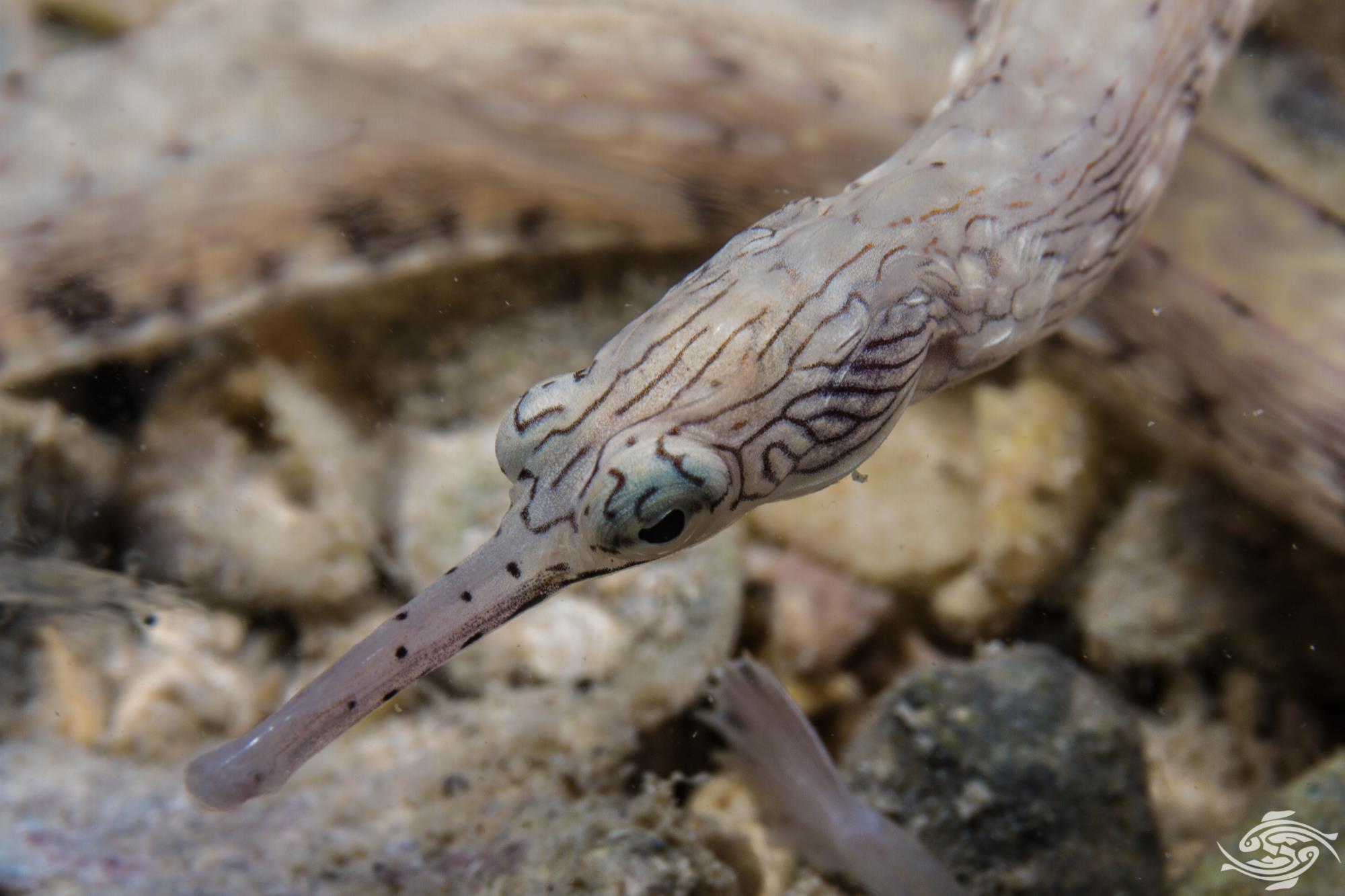 The Scribbled pipefish feed on small crustaceans, mainly copepods, isopods, amphipods and Mysids. They use their pipette like mouth to suck their prey into their mouths. The specimen below was just about to siphon a prey item as it was photographed. 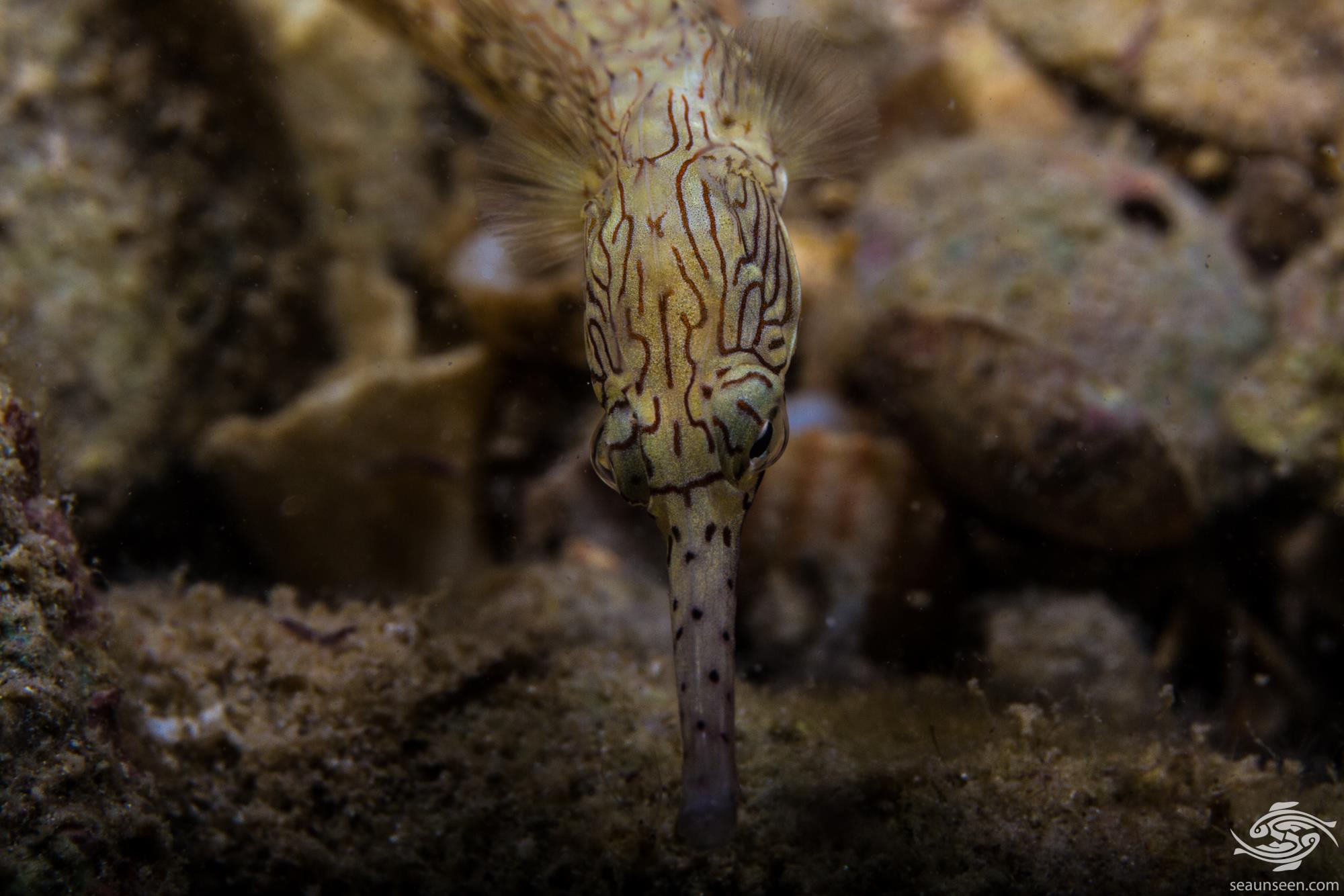 They are predated on by larger fish and one night we saw a Tasseled Scorpionfish gulp down a male Scribbled pipefish that made the mistake of swimming in front of it. 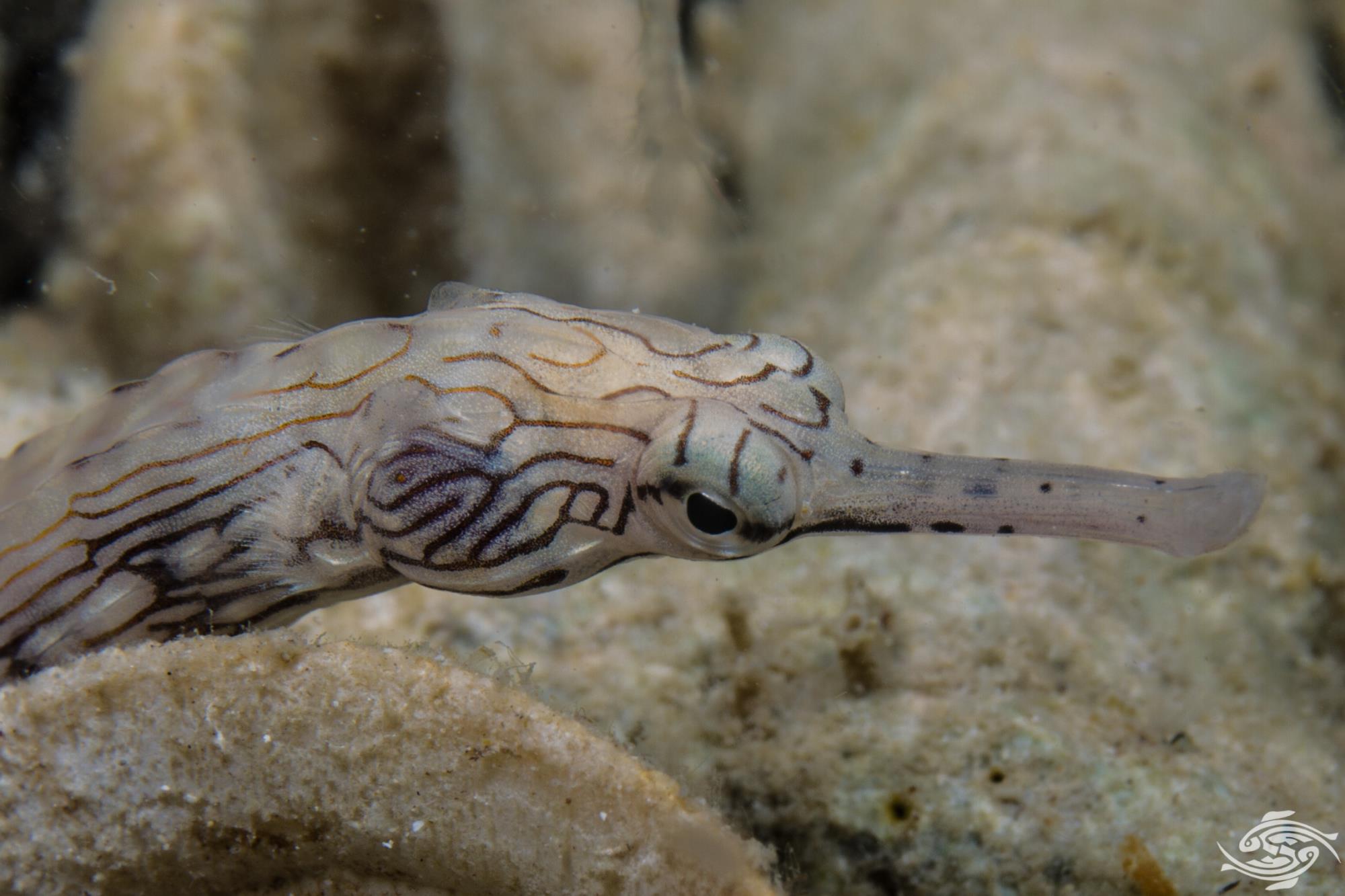 After an elaborate courtship dance the female deposits eggs into the specialized brood pouch on the underside of the male.  The pouch can be seen in the images below. 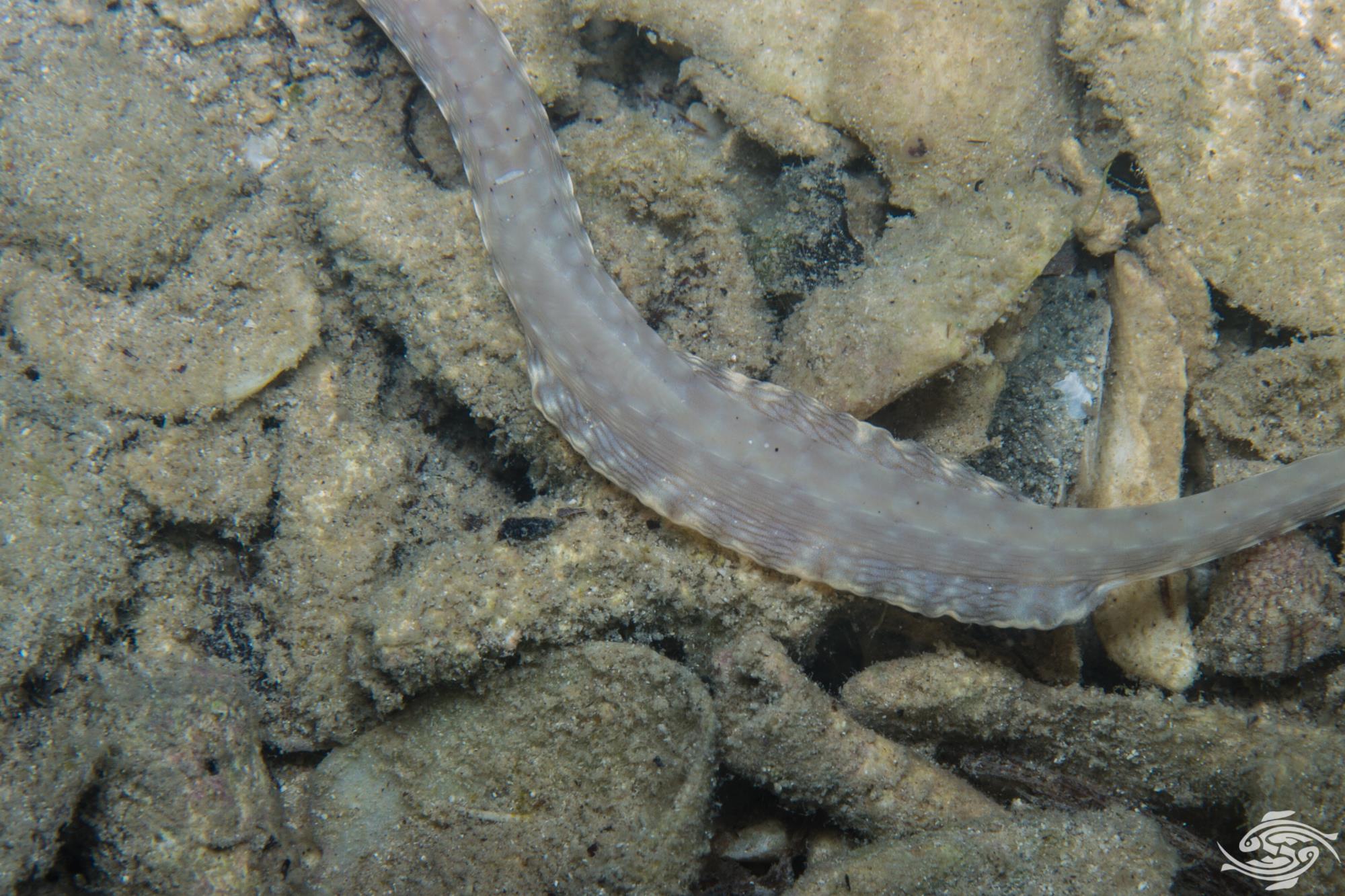 The eggs are then nurtured by the male and this process is thought to take 14 to 17 days. 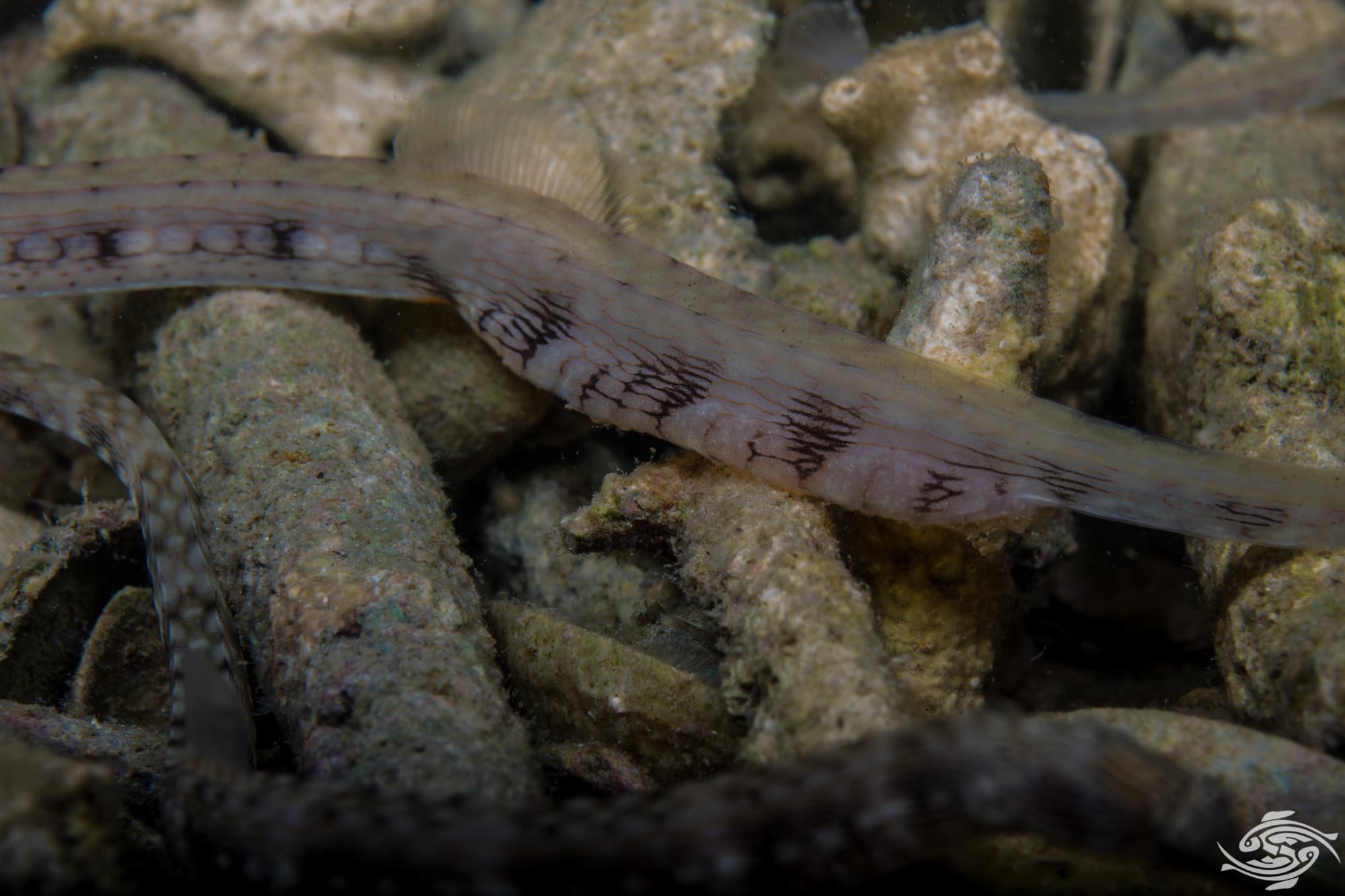 Once the eggs have developed they hatch and are ejected out of the brood pouch.

All pipefish are difficult to keep in the sense that they require live food, but if one can get the right cultures going in ones tank then they can be successfully kept.  They can initially be fed brine shrimp but it will be necessary to culture Mysids, copepods, isopods and amphipods.  I once kept a pair very successfully for some 18 months without much of a problem before I accidentally bumped the light fitting into the tank and nearly electrocuted myself. The entire tank died within two days.  They cannot take strong currents and care has to be taken that they are not sucked into the filter. 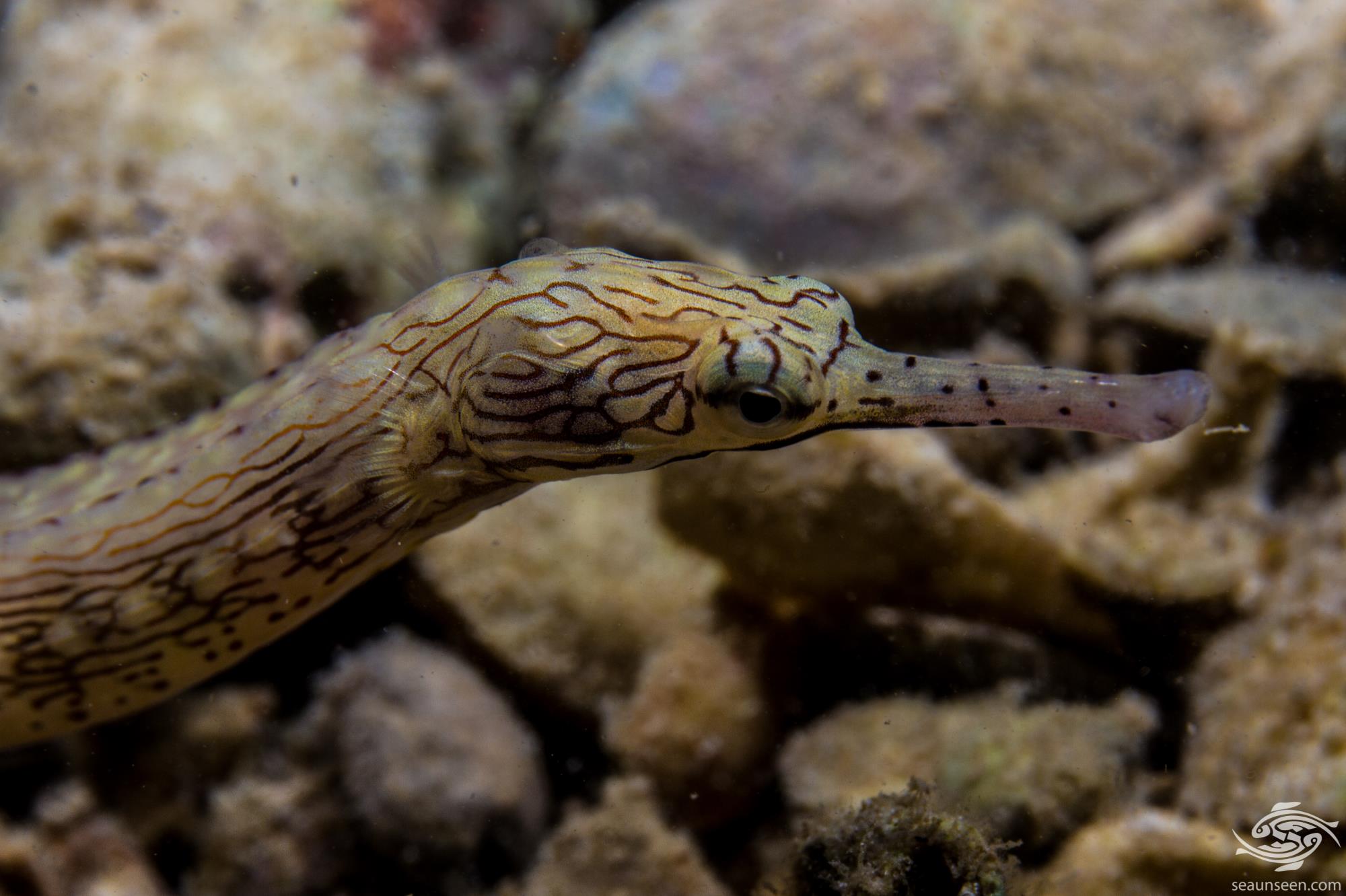 Ideally they are best kept on their own or with very passive tank mates.  I kept mine in a tank with large numbers of small shrimp which bred regularly, producing a steady supply of larvae for the pipefish who seemed to thrive on this diet. It might be worth trying. 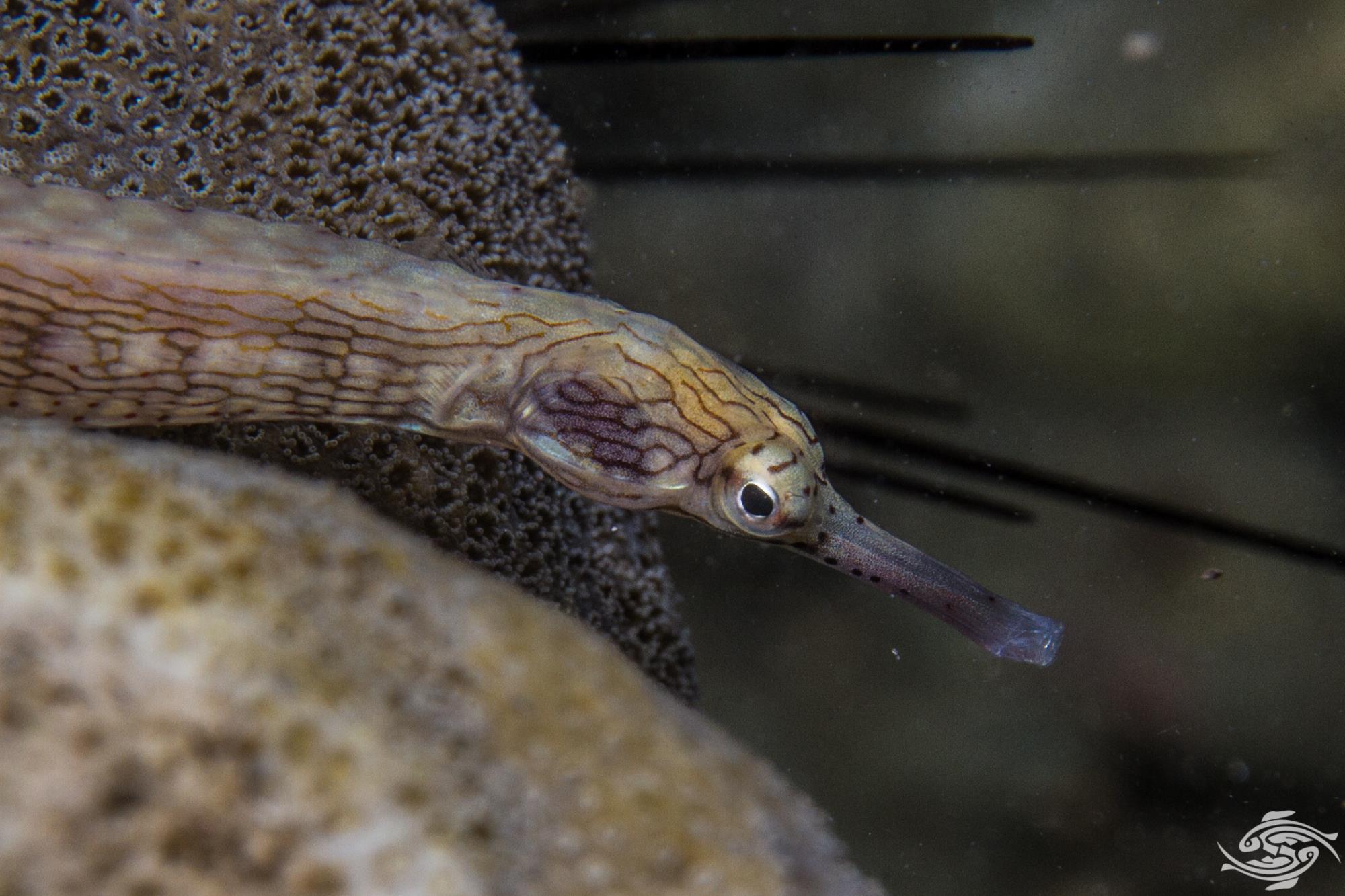