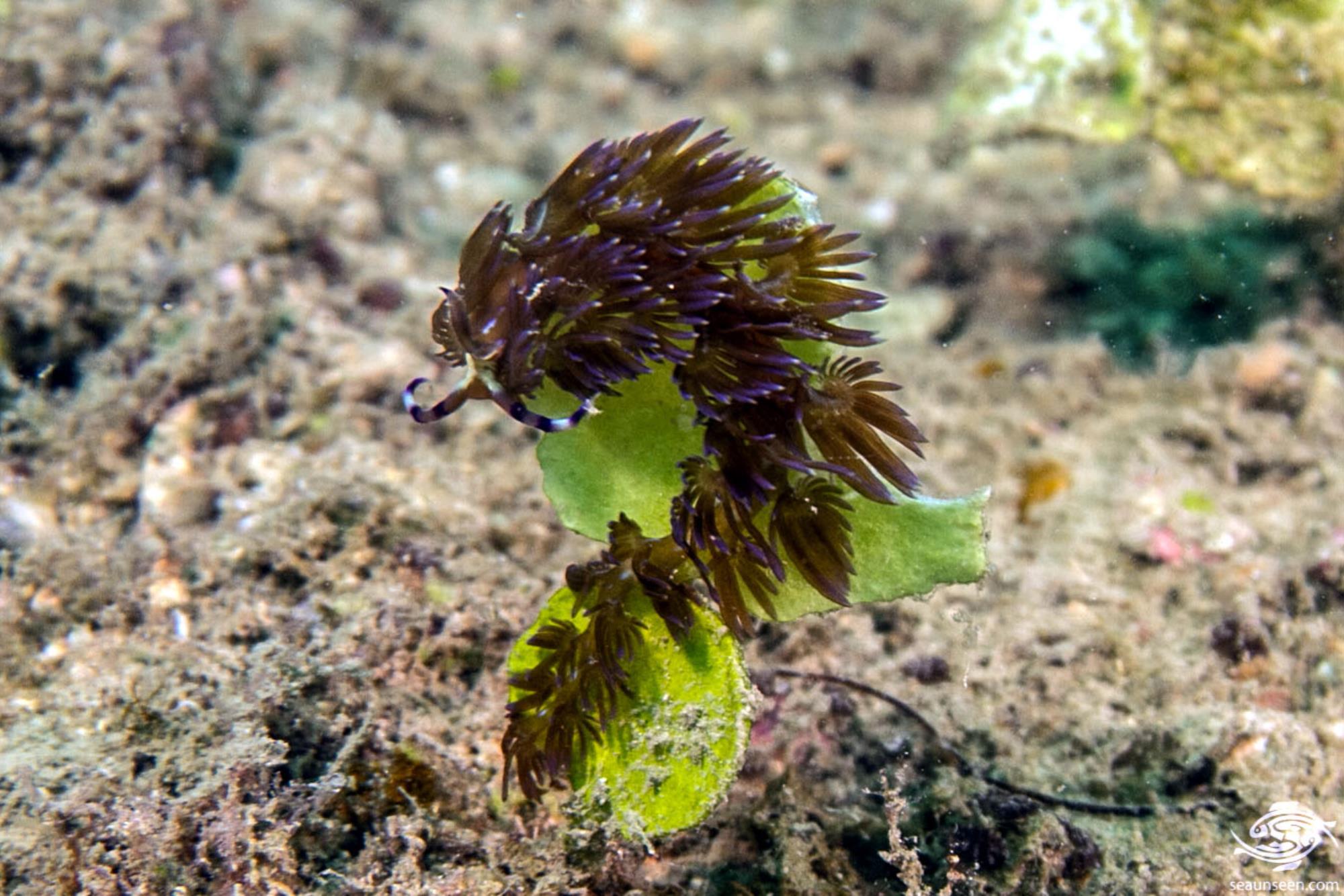 The Sea Dragon Pteraeolidia ianthina or Blue Dragon as it is known in Australia  is a dorid nudibranch, a marine gastropod mollusk. They are in the superfamily Aeolidioidea and are known as aeolids.

The Sea Dragon has an elongated shape with groups of projections known as cerata coming off the main body. In juveniles the entire body is a whitish color. In the adults in Tanzania the cerata are usually colored brown or brown with purple tips. The rhinophores in Tanzania are usually purple and white. They grow up to 5 centimeters in length. There are large color variations across their  range.

The Sea Dragon Pteraeolidia ianthina is usually spotted in rubble areas on the edge of reefs where lots of hydroids are found. They are often seen on leaves as in the images although these do not make up any portion of their diet.  Sometimes the leaves are isolated and one wonders why they climb up them. 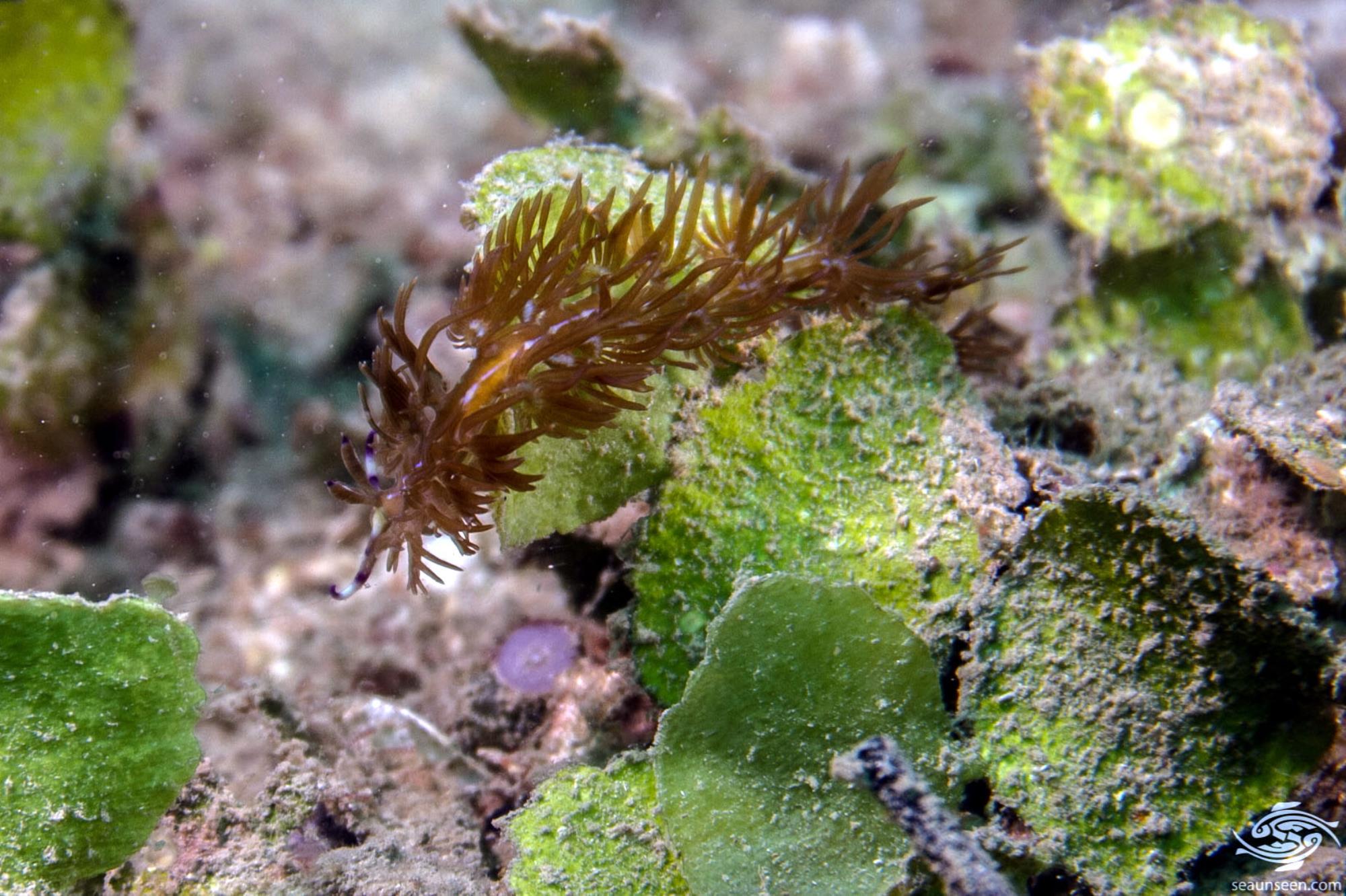 The Sea Dragon Pteraeolidia ianthina is found across the tropical and sub tropical Indo West Pacific.

The sea dragon feeds on hydroids which contain zooxanthellae that are photosynthetic. These live in the gut and cerata of the Sea Dragon and provide it with nutrients. These zooxanthellae are responsible for their coloration. Their favorite food are solitary hydroids. A solitary hydroid is pictured below. 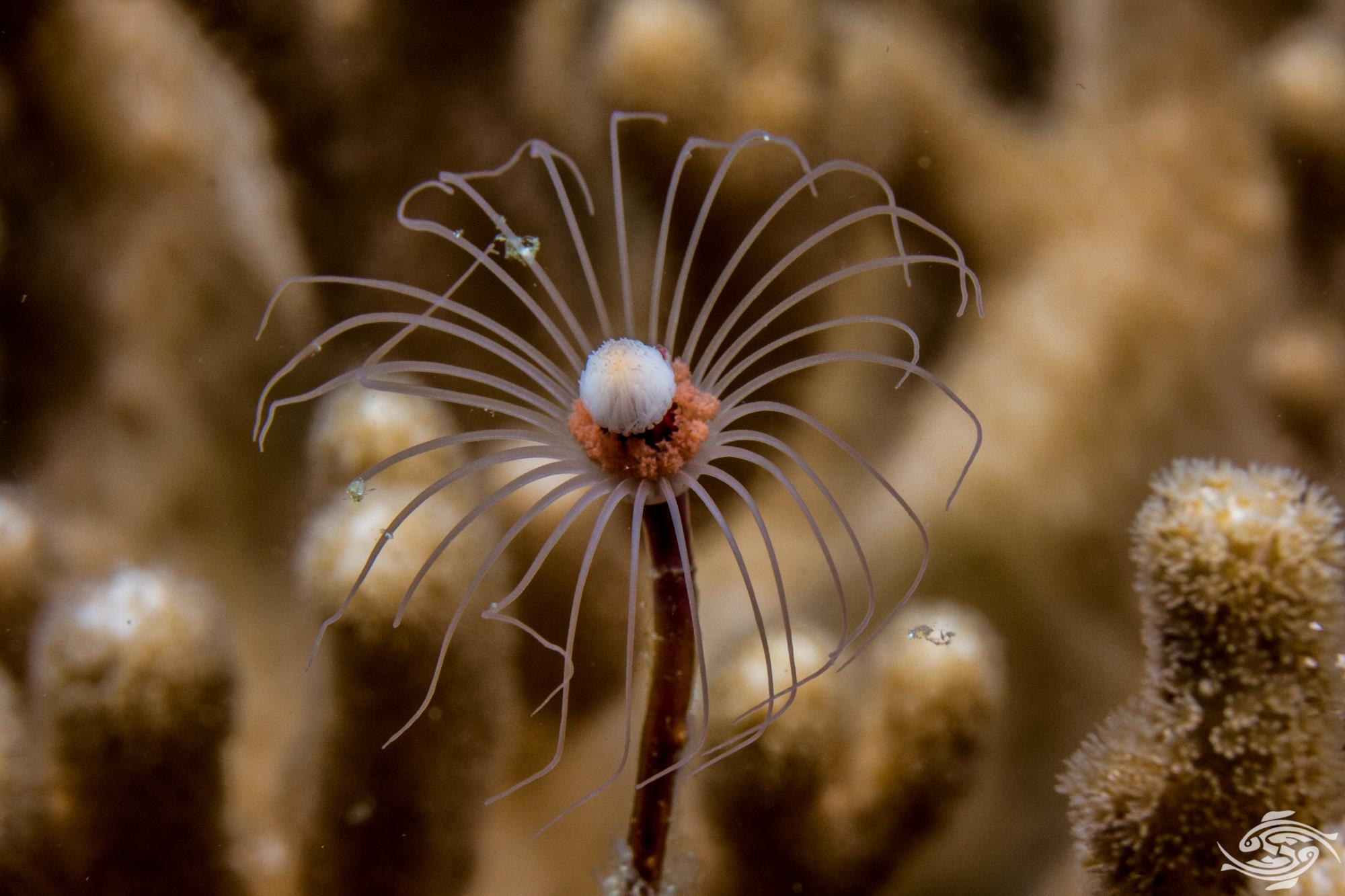 They are simultaneous hermaphrodites and mating takes place by darting. Eggs are laid on a solid substrate and when they hatch the larvae become planktonic before growing into adults. They may remain close to their eggs once they are laid but it is not known for sure whether they are caring for them. 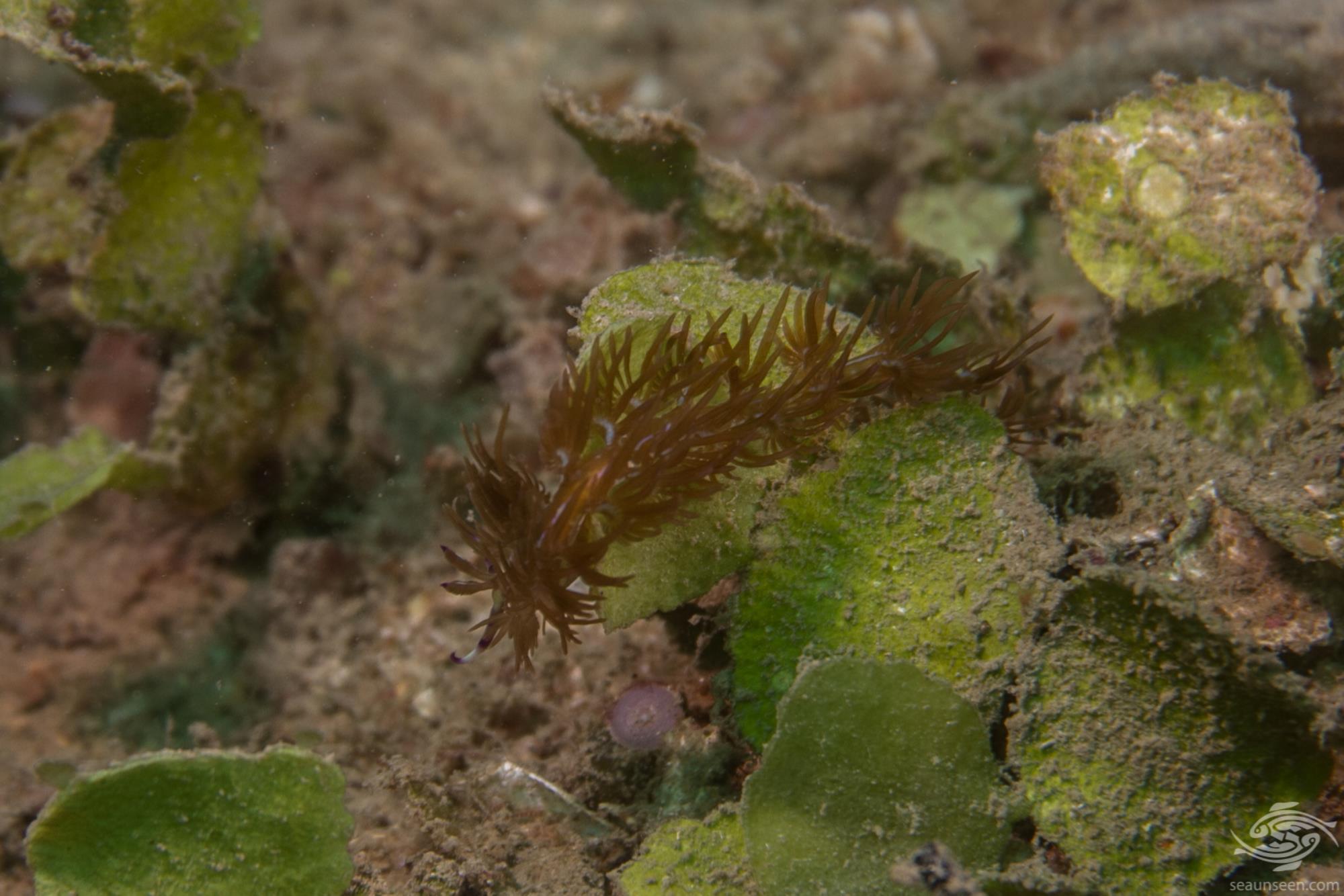 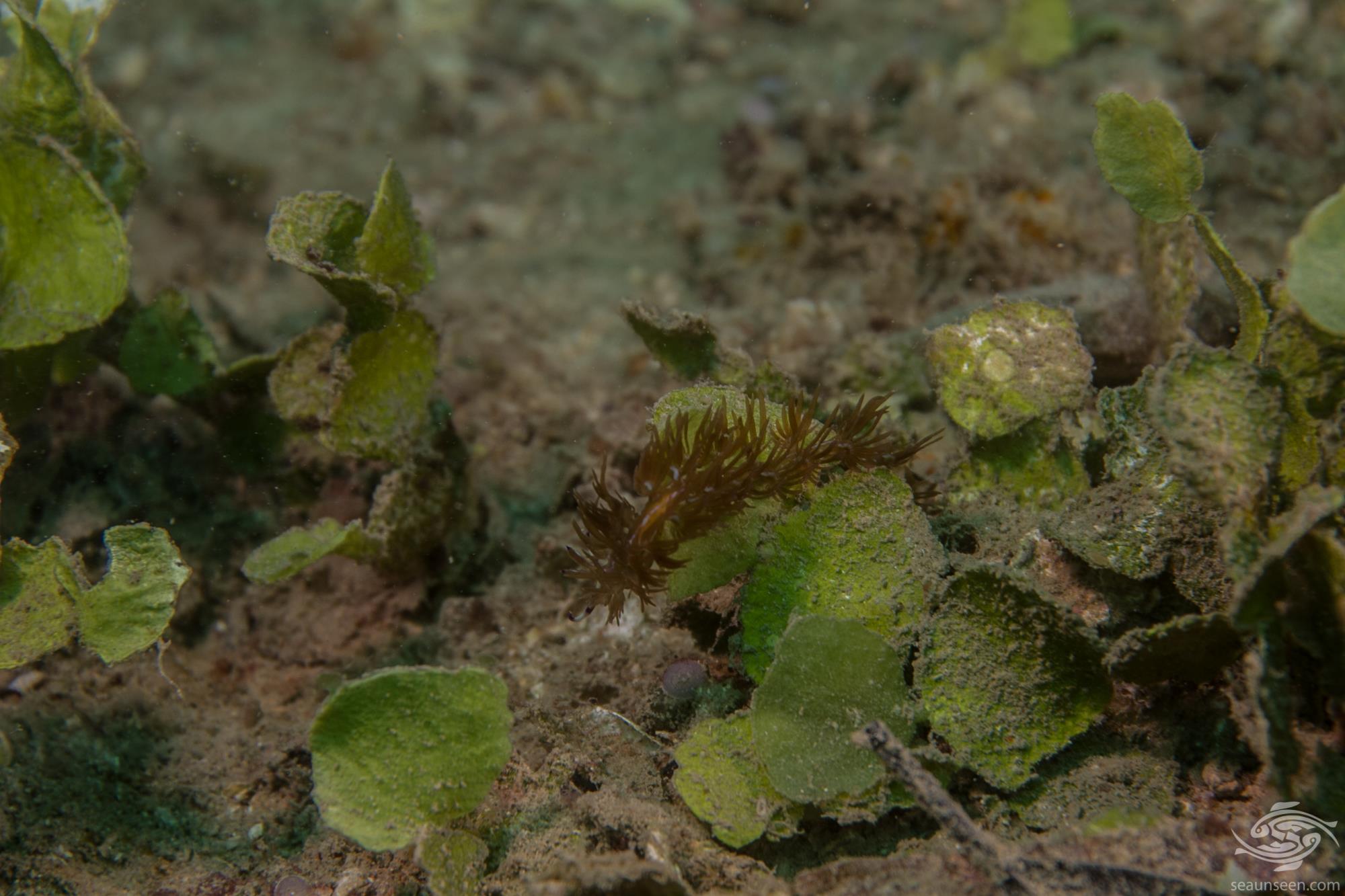