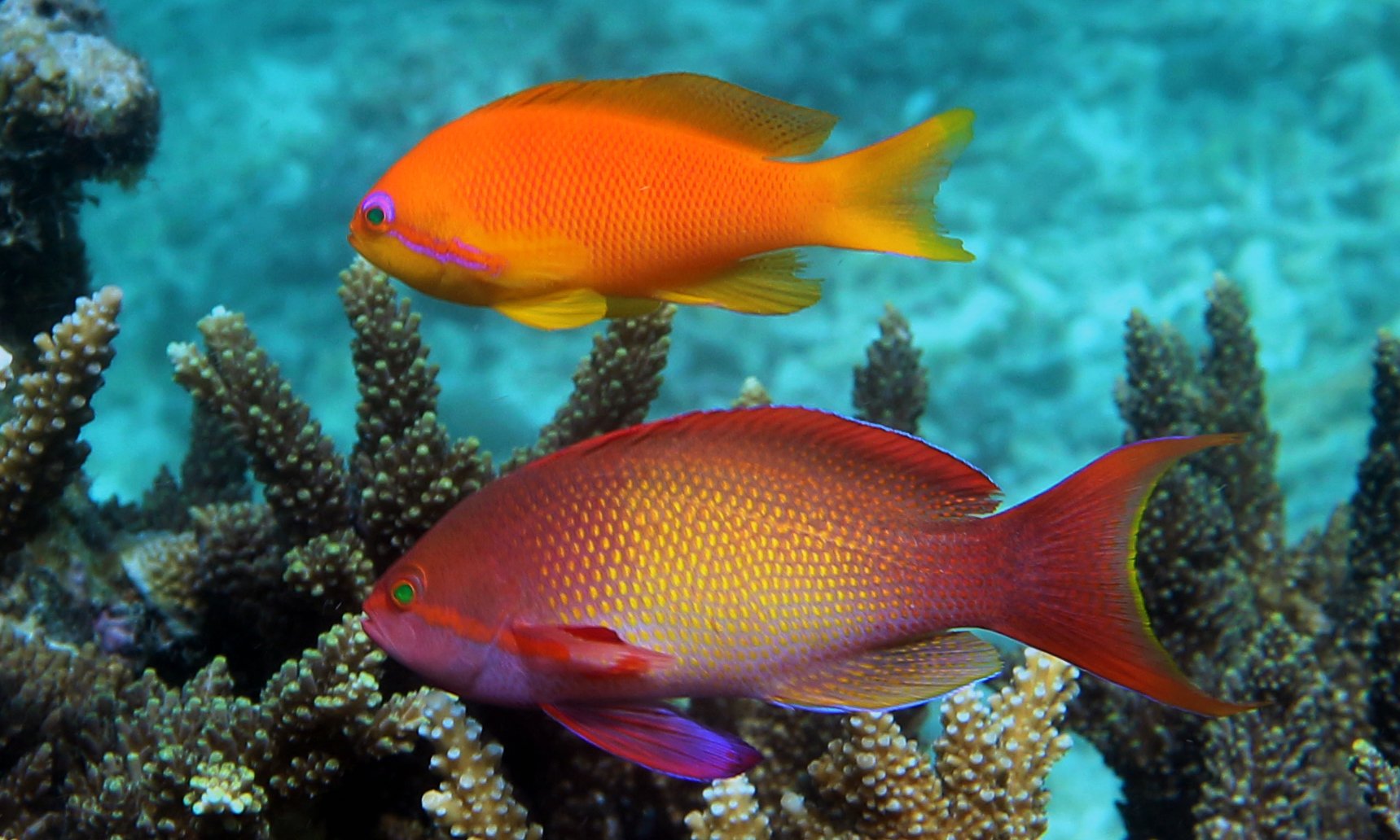 Sea Goldies (Pseudanthias squamipinnis) are also known as the Wreckfish, Lyretail Coralfish, Lyretail Anthias Basslets, Sea Bass, Orange Basslet, Orange Sea Perch, Red Coral Perch, Jewel Fairy Basslet,and Scalefin Anthias. They are a member of the Cod group ( Seranidae). Unusually for its group it is a Schooling species. Adults are found in large shoals hovering over a reef or on a wreck in water between 1 meter of depth to 30 meters but are more common from 15 meters dwnwards.

The sheer beauty of a large shoal of sea goldies is difficult describe. Because of their nature they allow one to approach them in fairly close proximity. Only darting into the coral or reef if they feel one is too close. Peering out at one from amongst the coral and quickly darting out again to a safe distance once one has moved a foot or two away from them. 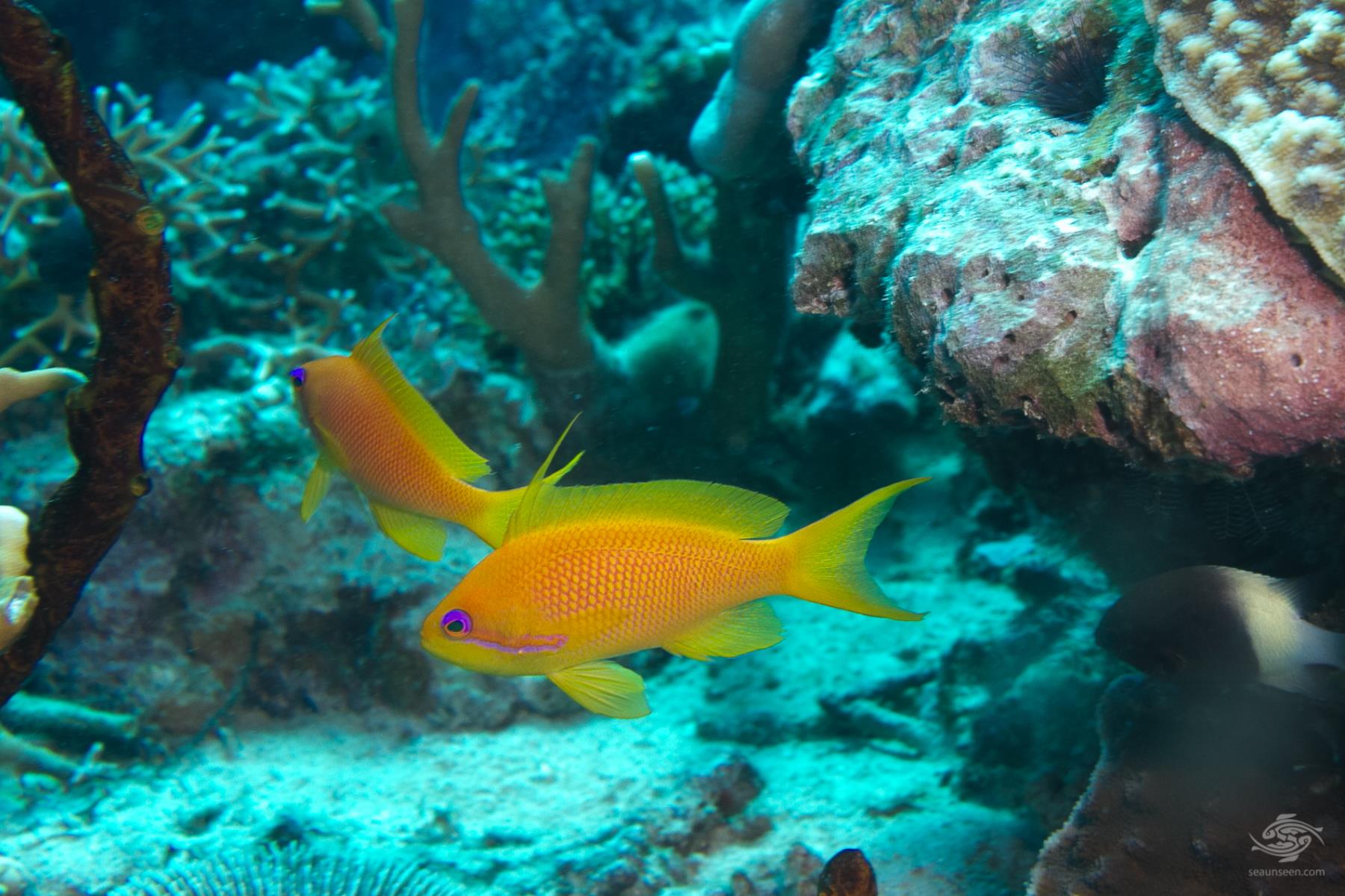 Sea goldies strongly exhibit sexual dimorphism with the females being smaller around 7 cm when full grown. The female is golden colored with a purple and orange streak across their eyes. Males are larger and grow up to 15 cm although they are usually smaller in the wild. The males have a reddish background color with a darker red stripe through their eyes. This fades towards purple around the pectoral fins. There is a golden dotted red pattern across the body. Their dorsal and anal fins have a thin blue line on the edge of the fin. A fine yellow line on the mid outer edge of the tail fin gives them a stunning coloration. 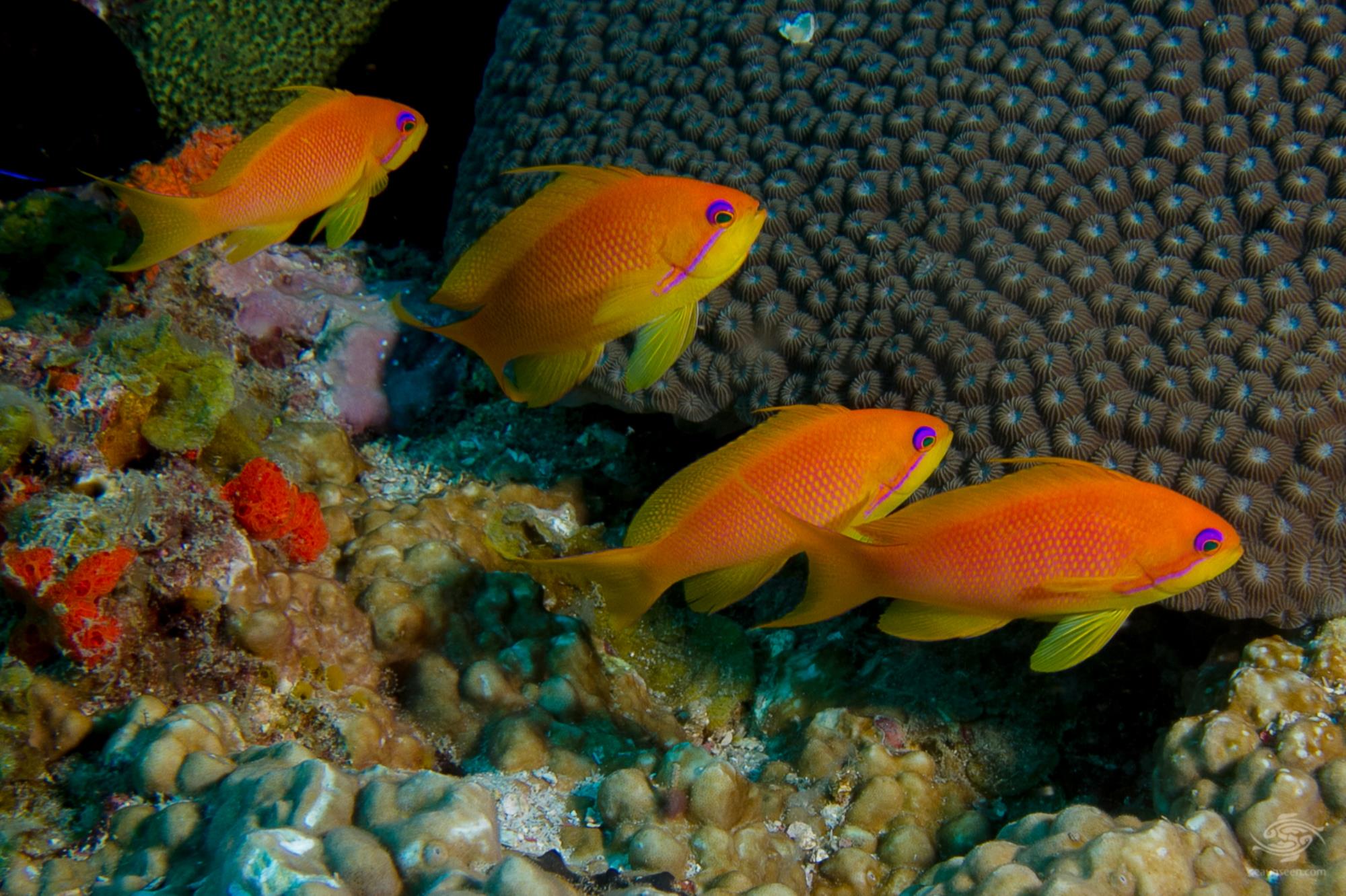 SEA GOLDIES IN THE WILD

The males are strongly territorial. Each male will have a group of females around them generally ranging from five to ten. On very rare occasions schools have been seen with a predominance of males or only males in a school. The reason for these male only schools is being unknown. The Anthius species are hermaphroditic and have the ability to change from female to male. If the male in a group dies the largest or dominant female will change over to a male. 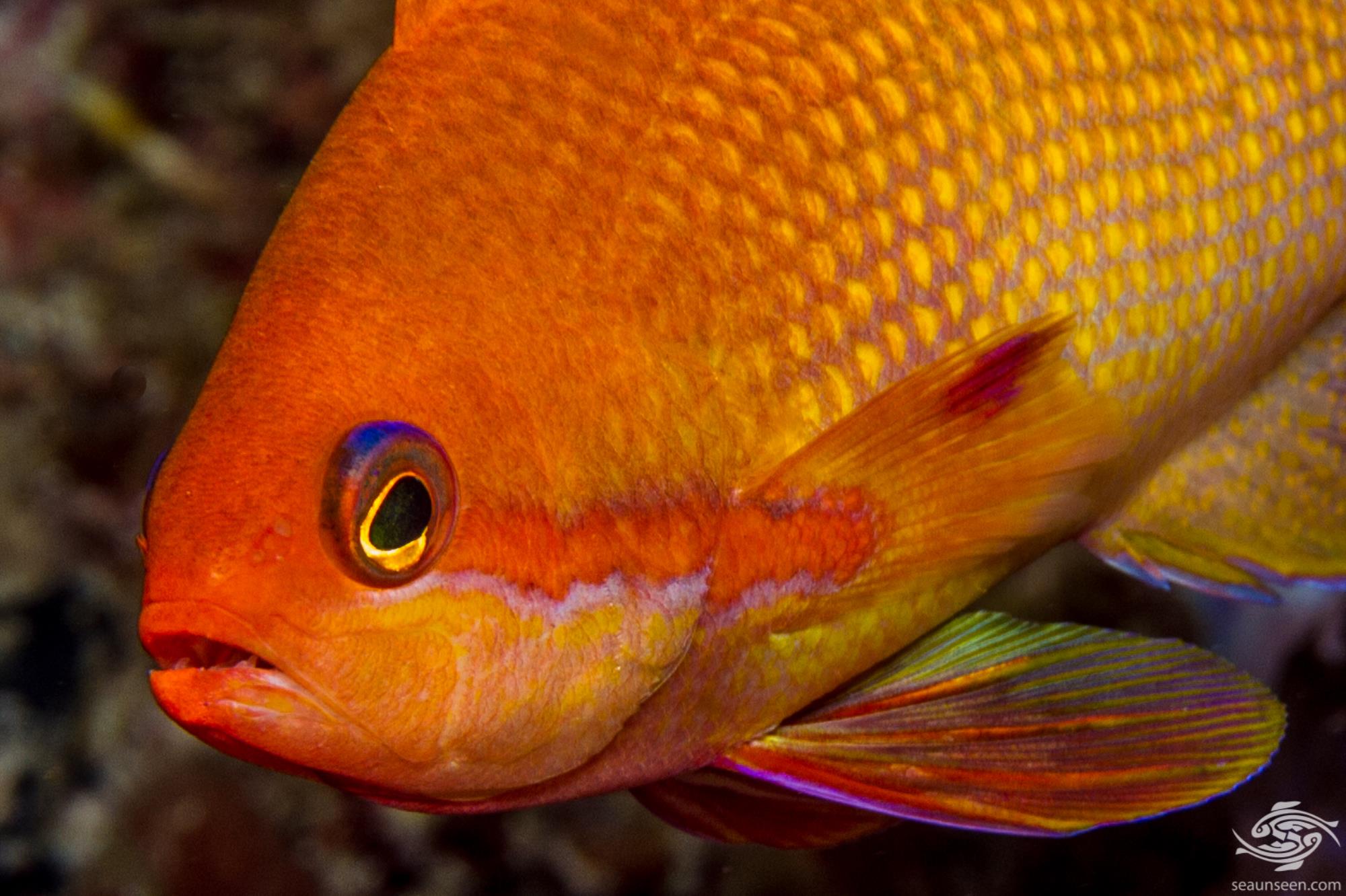 When the change over from male to female begins, the female develops a purple dot on the pectoral fin as seen above and the predominant body colour begins changing from gold to red . 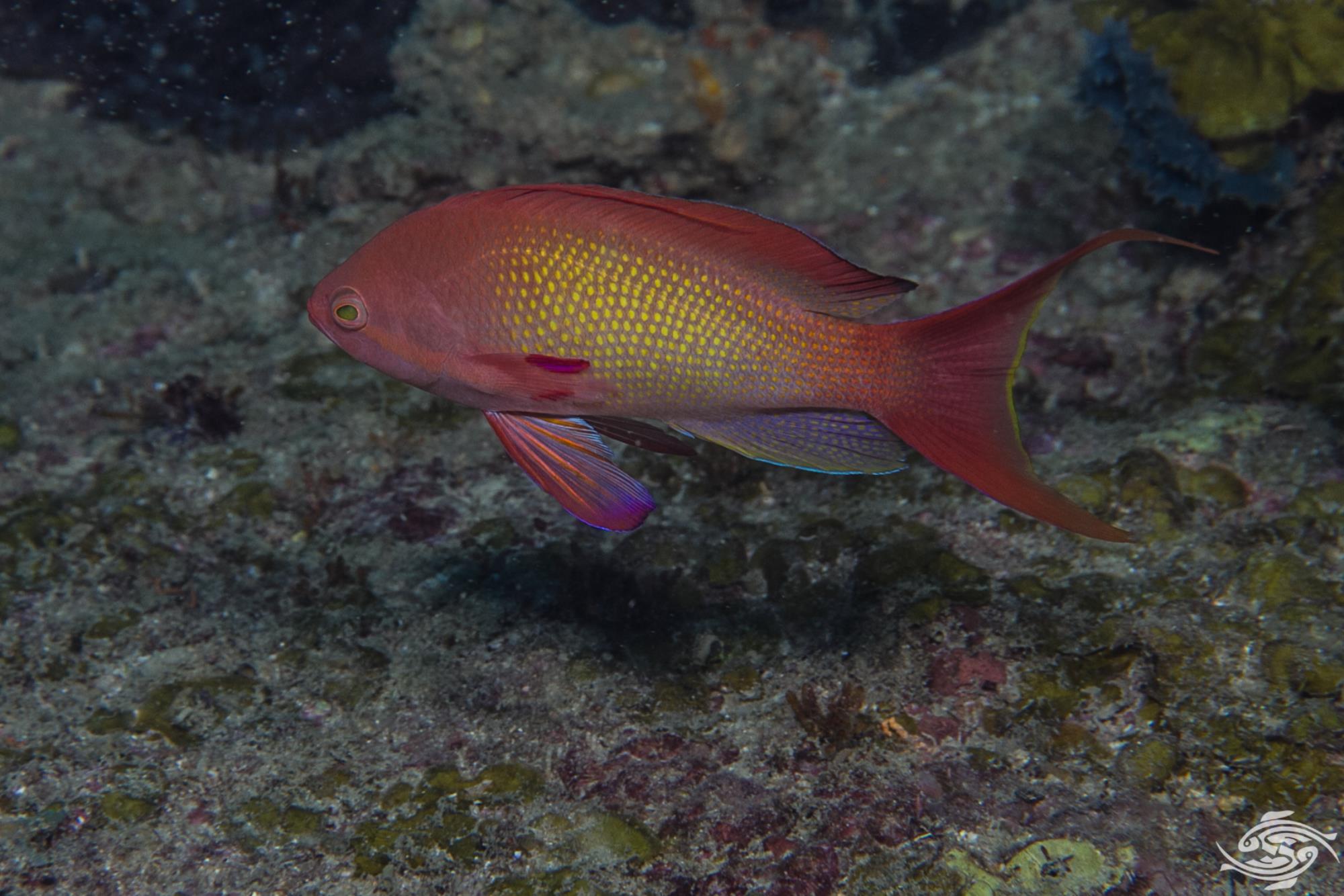 Juveniles of the species are often found very close inshore in the waters of KwaZulu-Natal. Often in large rock pools on the shore. Presumably they will exhibit this behavior elsewhere as well. They seem to favor specific locations inshore. Juveniles can be found in the same location every year and collectors tend to keep these locations a closely guarded secret.

Sea Goldies are found across the Indo Pacific area ranging from Natal, South Africa to Japan and Australia. 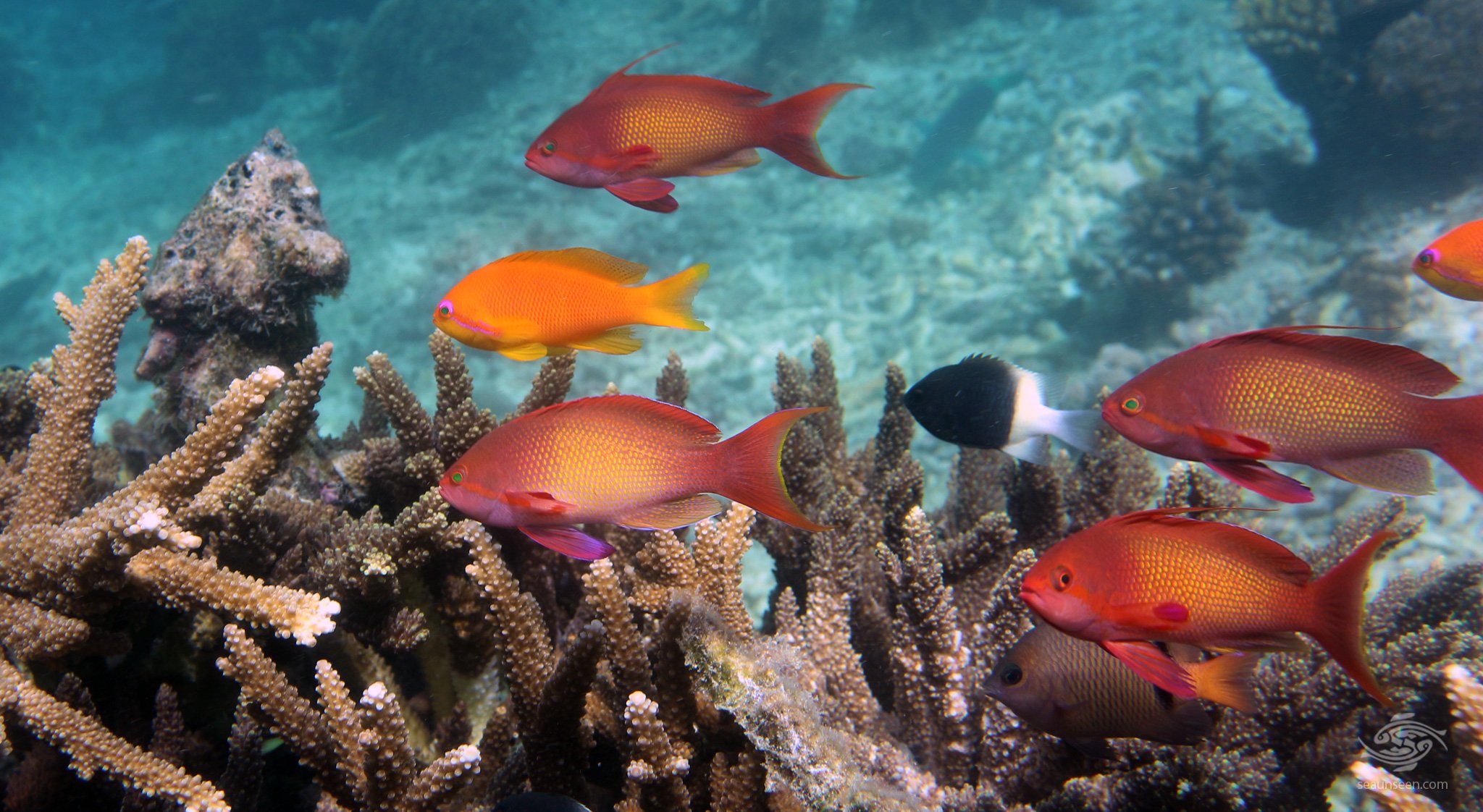 Because of its beauty and hardy nature the Sea Goldie is very popular among salt water aquarists and a small shoal of these fish are an asset to any aquarium. They may be safely kept with invertebrates, feeding on zooplankton in its natural environment. As a rule they readily accept small pieces of freeze dried food and can easily be moved onto flakes. They are an ideal fish for a reef tank with a rating of 3 on the difficulty level.

As they have a confident nature they are fairly easy to catch with a net and once in an aquarium draw out of hiding more reclusive fish. The more reclusive fish seem to regard them swimming out in the open as an indication that it is safe to go out and swim. Sea goldies do best when kept in a small group and are a very social species. As they have a complex set of social rules related to size dominance amongst the females, they require a moderate sized aquarium. Because of the size related social rules it is best if one does not have two large females of equal size.

Sea goldies are an exceptionally beautiful fish and when diving with them in good light one cannot help thinking of a comparison between the male and a Siamese fighter male. 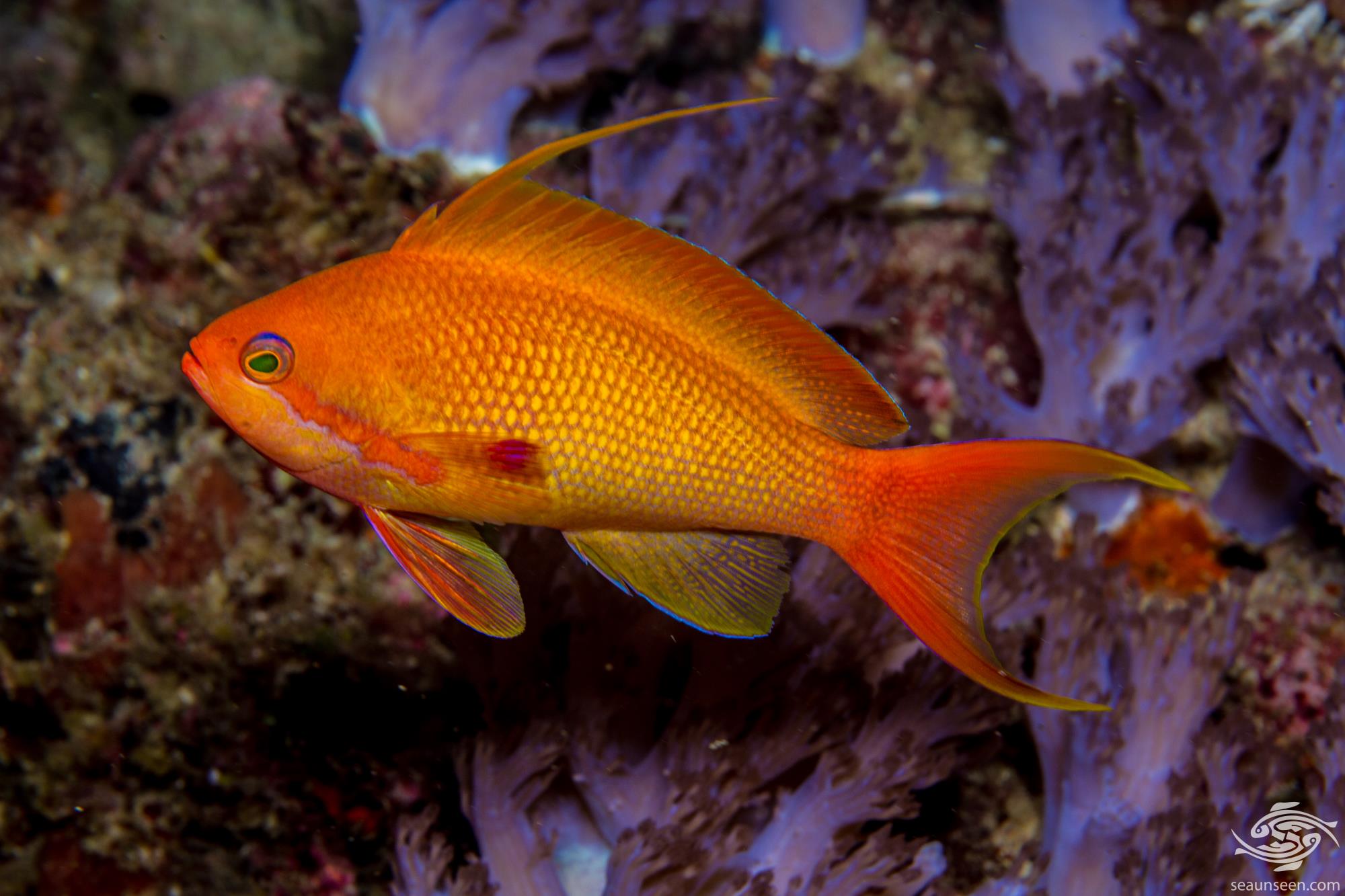