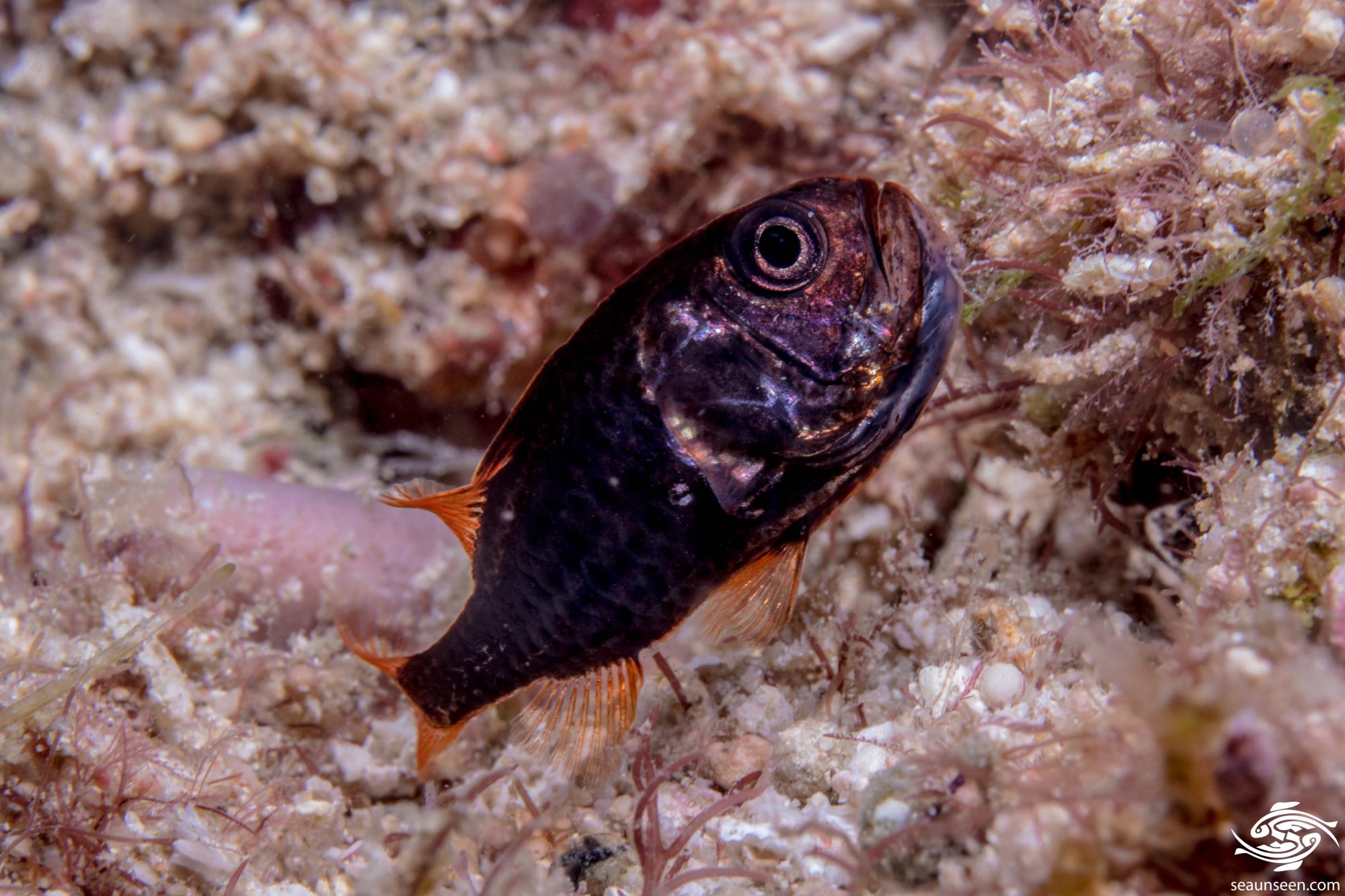 The Sea Urchin Cardinalfish ( Siphamia mossambica) is not an easy fish to spot as they spend most of their time hiding within the spines of an urchin. They are even more difficult to photograph. The images in this post were obtained more by luck than anything else and this after several years of trying. They were first described by Smith in 1955. Not much is known about the behavior of these fish and they are difficult to study. 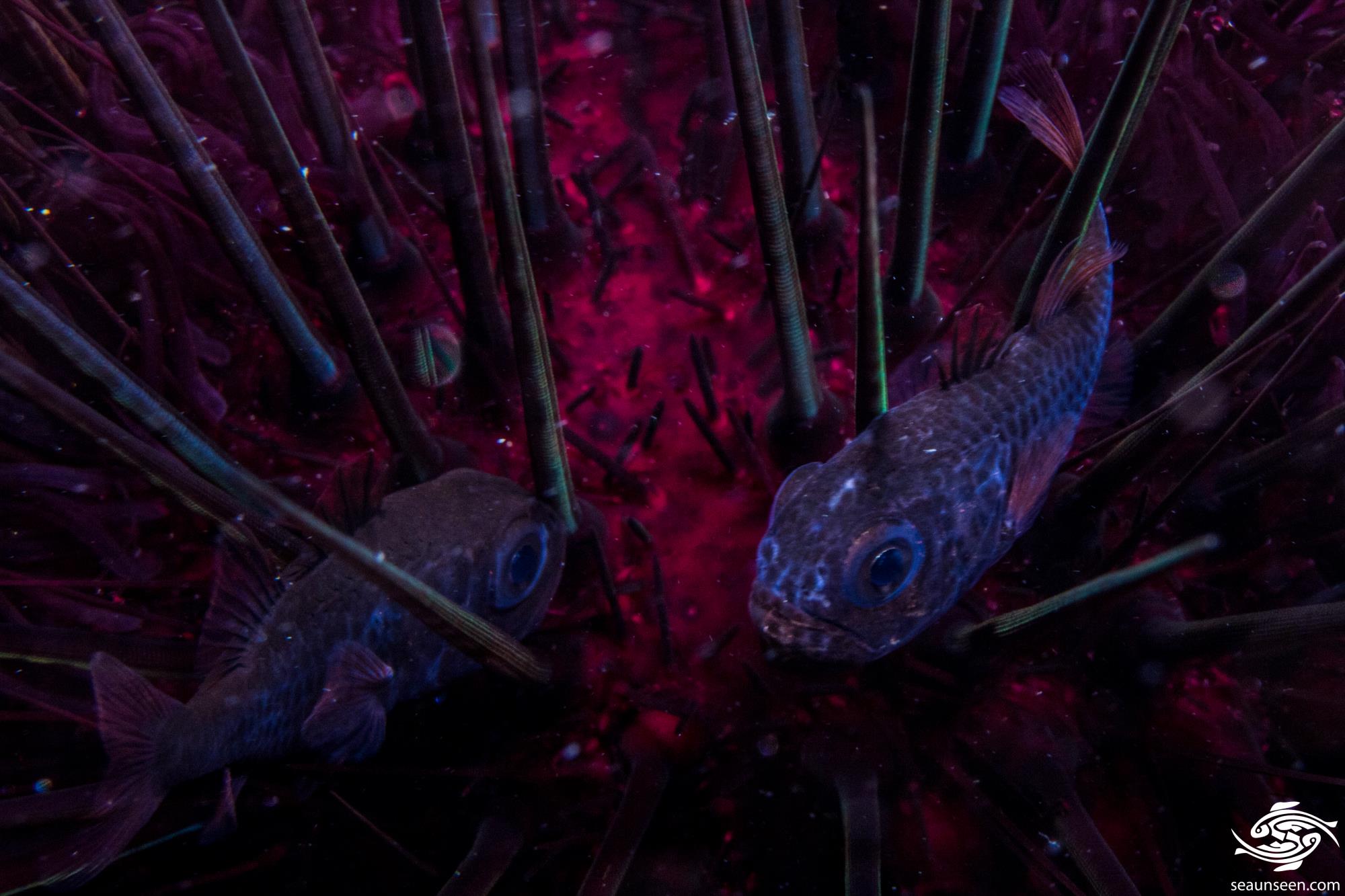 The body shape differs from that of the usual Cardinalfish, the head is large, as is the mouth and the caudal fin is proportionally small. The eye is proportionally large and the body is a dark brown black color with several rows of darker dots running across the body.  The fins are transparent but are tinted orange as can be seen in the images.  They have two light emitting organs in the body presumably for feeding or mating purposes and grow to a maximum length of 4 cm. 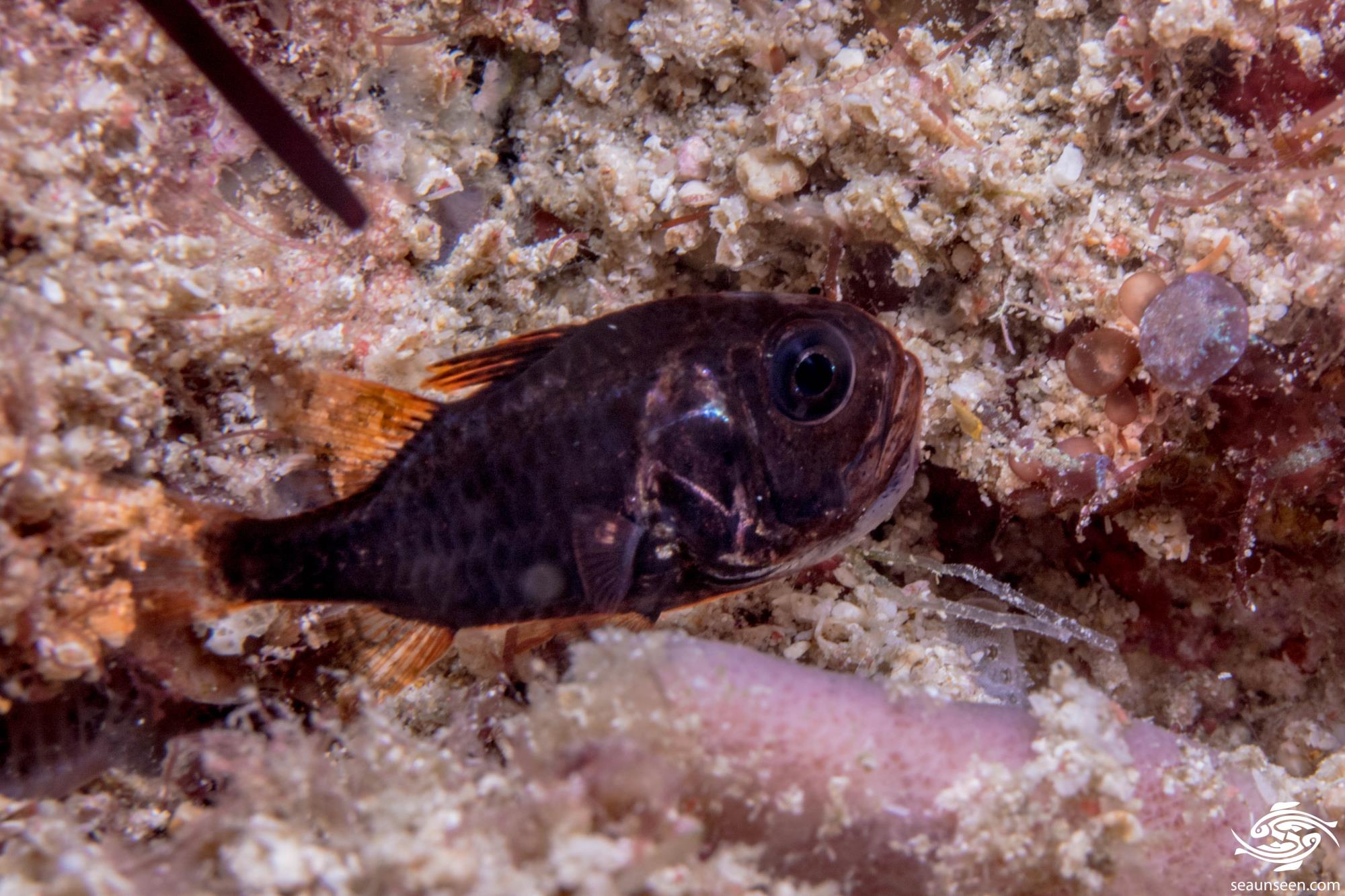 SEA URCHIN CARDINALFISH IN THE WILD

The Sea Urchin Cardinalfish are usually found only in one type of sea urchin in Tanzania. These urchins congregate in large groups  and as one attempts to photograph them hiding in one urchin so they move to an adjoining urchin making it very difficult to observe or photograph them. Although they are very poor swimmers they are capable of quick darts.  If one finds them , they are usually in groups of  four to ten fish in an urchin. The best time to photograph them is at night and if one is lucky enough to find them in a single urchin on its own then it is easier.

When one puts lights on them all the fish in the particular urchin initially huddle together and appear to shiver. I have tried turning my lights off at this time to see if they are emitting any light while exhibiting this behavior but have never seen any sign of light. 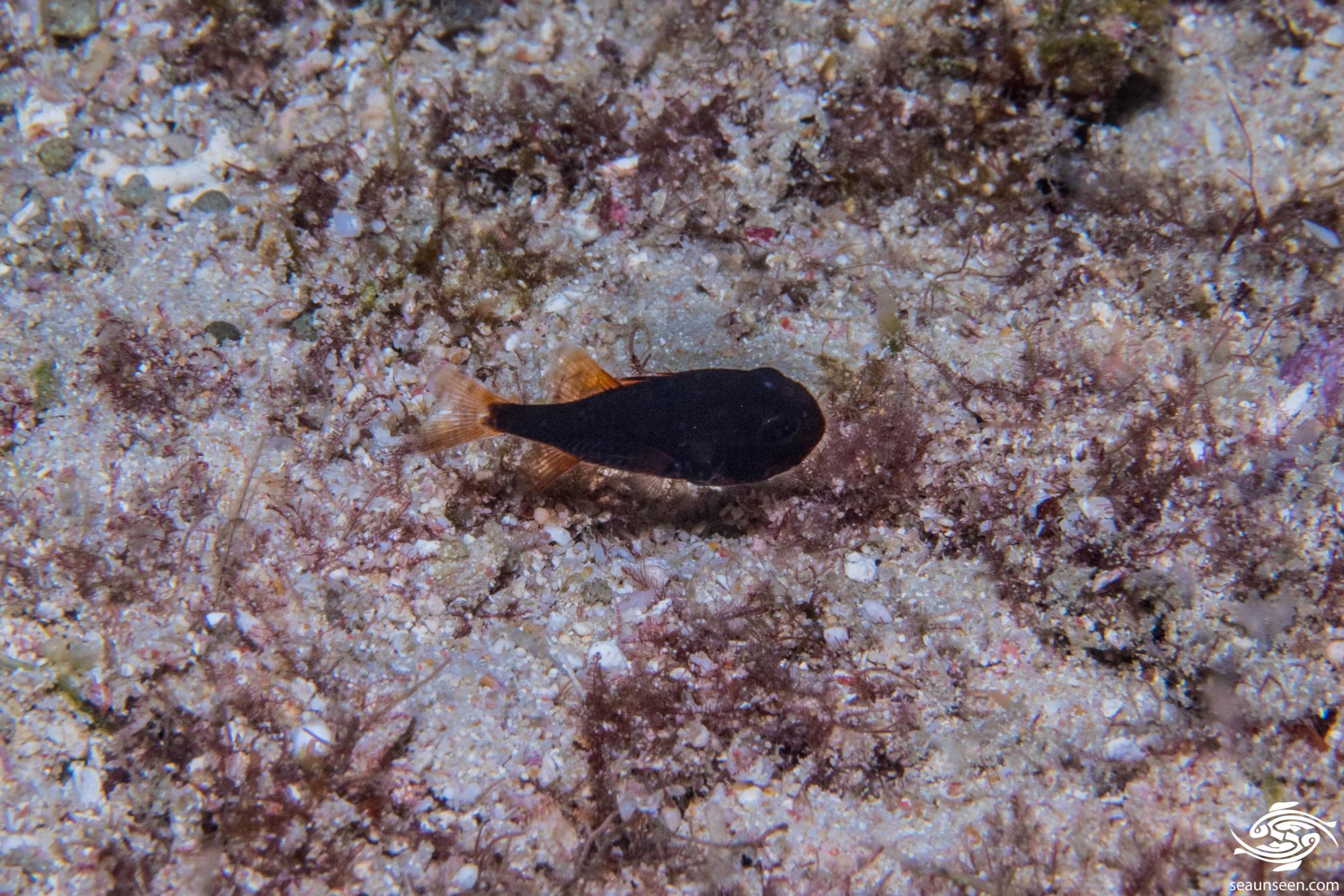 The Sea Urchin Cardinalfish is found from Kenya south to South Africa including Madagascar Mauritius and the Seychelles. They are found between depths of  2 meters to at least 22 meters in Tanzanian waters to date. They are reportedly found in only the spines of Echinotrix diadema and Diadema setosum but in Tanzania we have never seen them in these urchins. Yet to identify the species here. 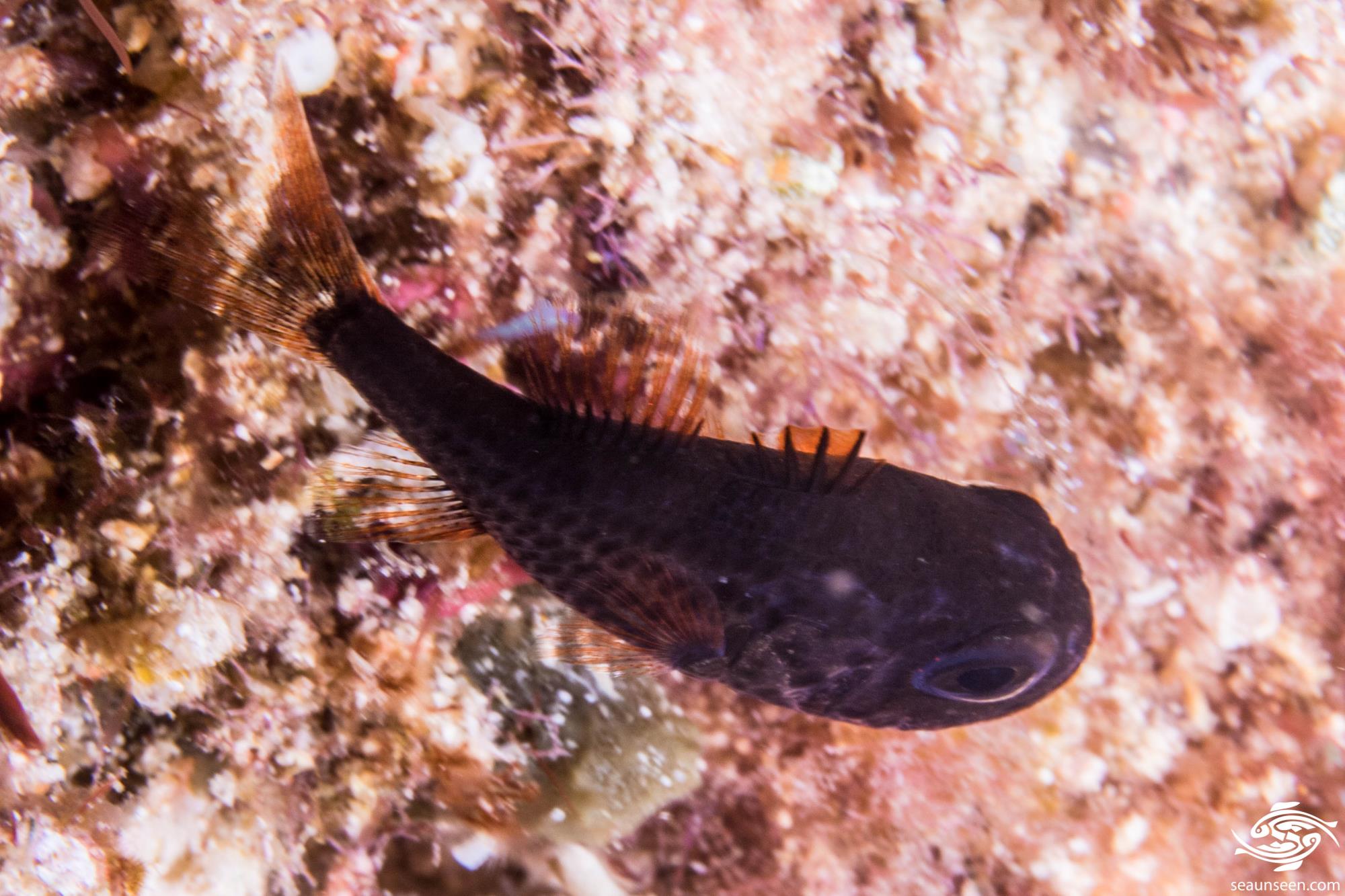 The Sea Urchin Cardinalfish are nocturnal feeders , presumably feeding  on zooplankton and small benthic organisms. There seems to be no literature on their diet. 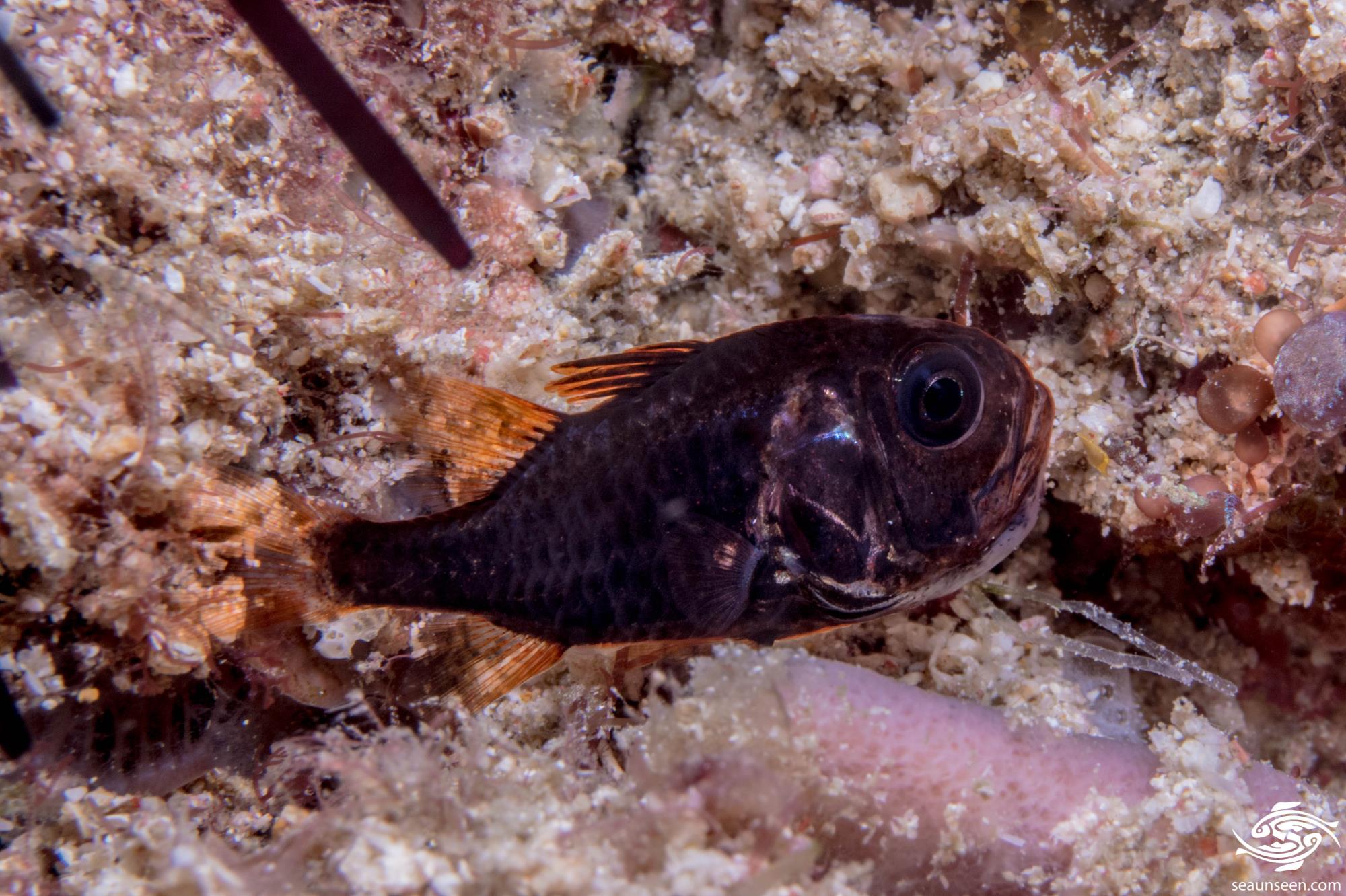 With all Cardinalfish, during breeding pairs are formed and after performing a mating dance, the eggs are laid by the female and fertilized by the male. The male then collects the fertilized eggs which are in the form of a clump when expelled by the female and carries the eggs in his mouth until they hatch. During this time the male cannot feed. Towards the end of the incubation period the males become quite skinny making the protruding mouth more noticeable. This can result in cannibalism with the male eating some of the eggs. We have only witnessed the egg laying on one occasion and it seems to occur on nights with a full moon.

Sea Urchin Cardinalfish are probably not commonly kept in aquariums but it would be interesting to try and keep them to learn more about their behavior.
READ OUR OTHER POSTS ON CARDINALFISH HERE