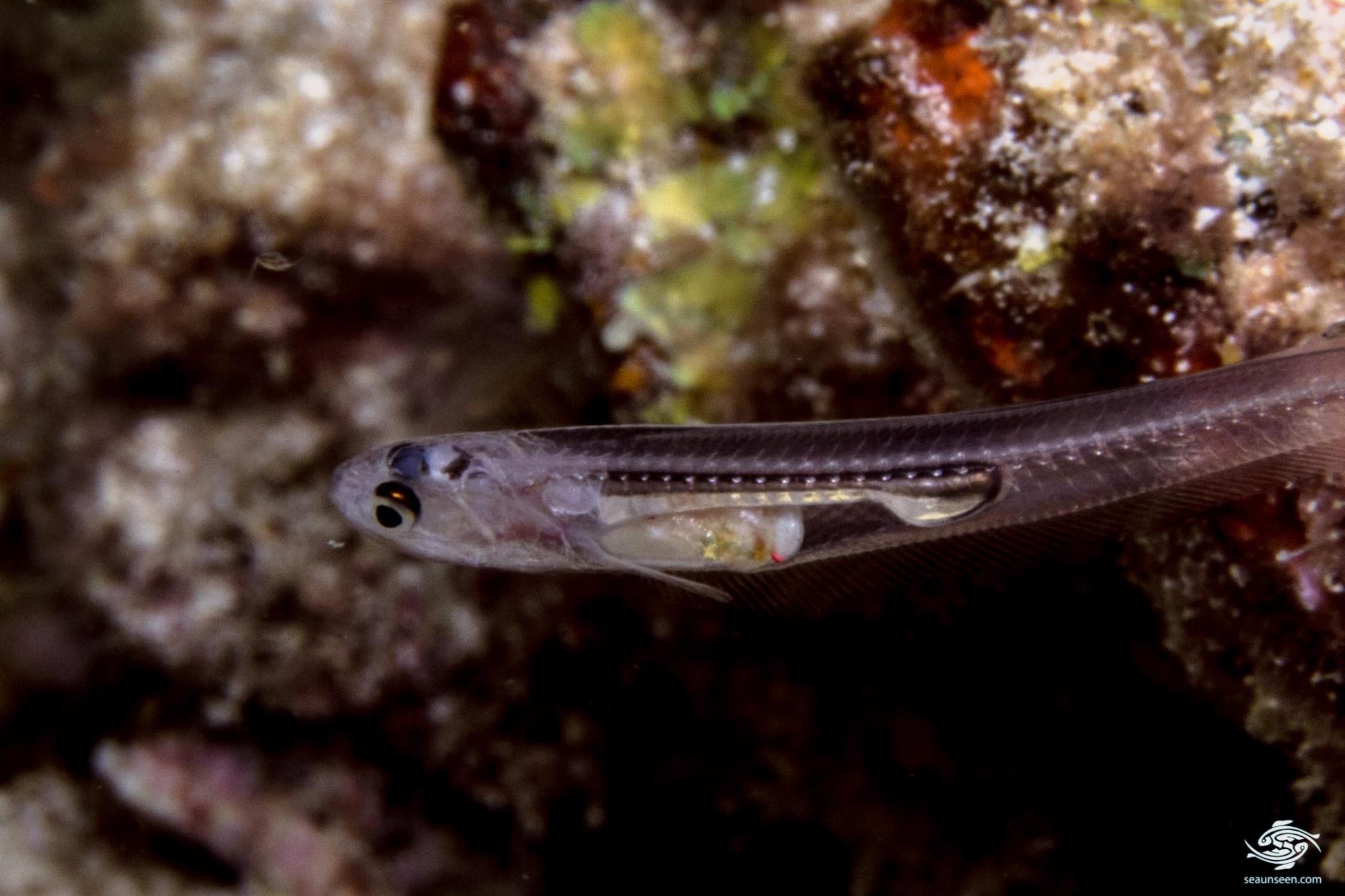 The Silver Pearlfish (Encheliophis homei) is a very unusual fish with an out the ordinary lifestyle. They are not commonly seen, perhaps for several reasons. The specimens below were photographed on night dives on shallow unprotected reefs on the Tanzanian coast off of Dar es Salaam.

During the day they spend their time inside the coelom of sea cucumbers, emerging to feed only at night. Being nocturnal they steer clear of light and will usually swim to the outer peripheries of ones dive lights, additionally because of their transparent nature and habit of swimming low and fast on the substrate they are difficult to pick out and to photograph. Numerically there do not appear to be many of them and they are not often seen.

Silver Pearlfish spend a substantial portion of their lives inside the coelom of sea cucumbers and the anus is far forward on the body, theoretically allowing them to just pop their heads out the sea cucumber to defecate.  The relationship between them and their sea cucumber hosts may change during their life cycle from parasitic to commensal as adults. 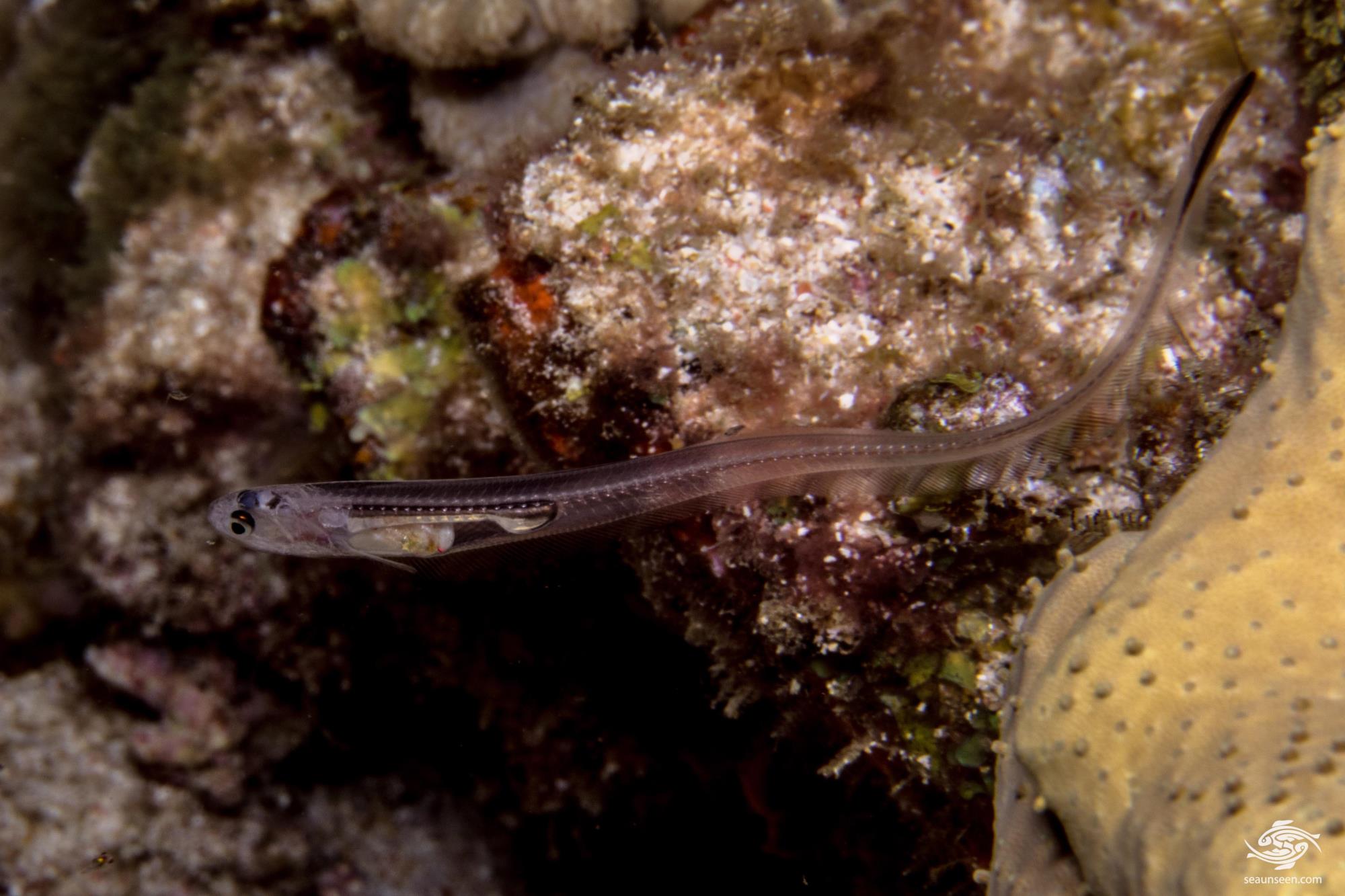 Silver Pearlfish undergo three main stages of development,  after hatching there is a larval stage, then the body assumes a lengthened shape with the anus at the end of the body cavity. As the fish ages so the anus moves forward and the body lengthens into an eel like shape lacking pelvic fins, which can be clearly seen in the image below.

They are transparent but they do flash silver on some angles, giving them their common name.  Although they are scaleless to the eye , staining reveals what are possibly rudimentary scales along the lateral line.  The adults grow to approximately 12 centimeters in length. 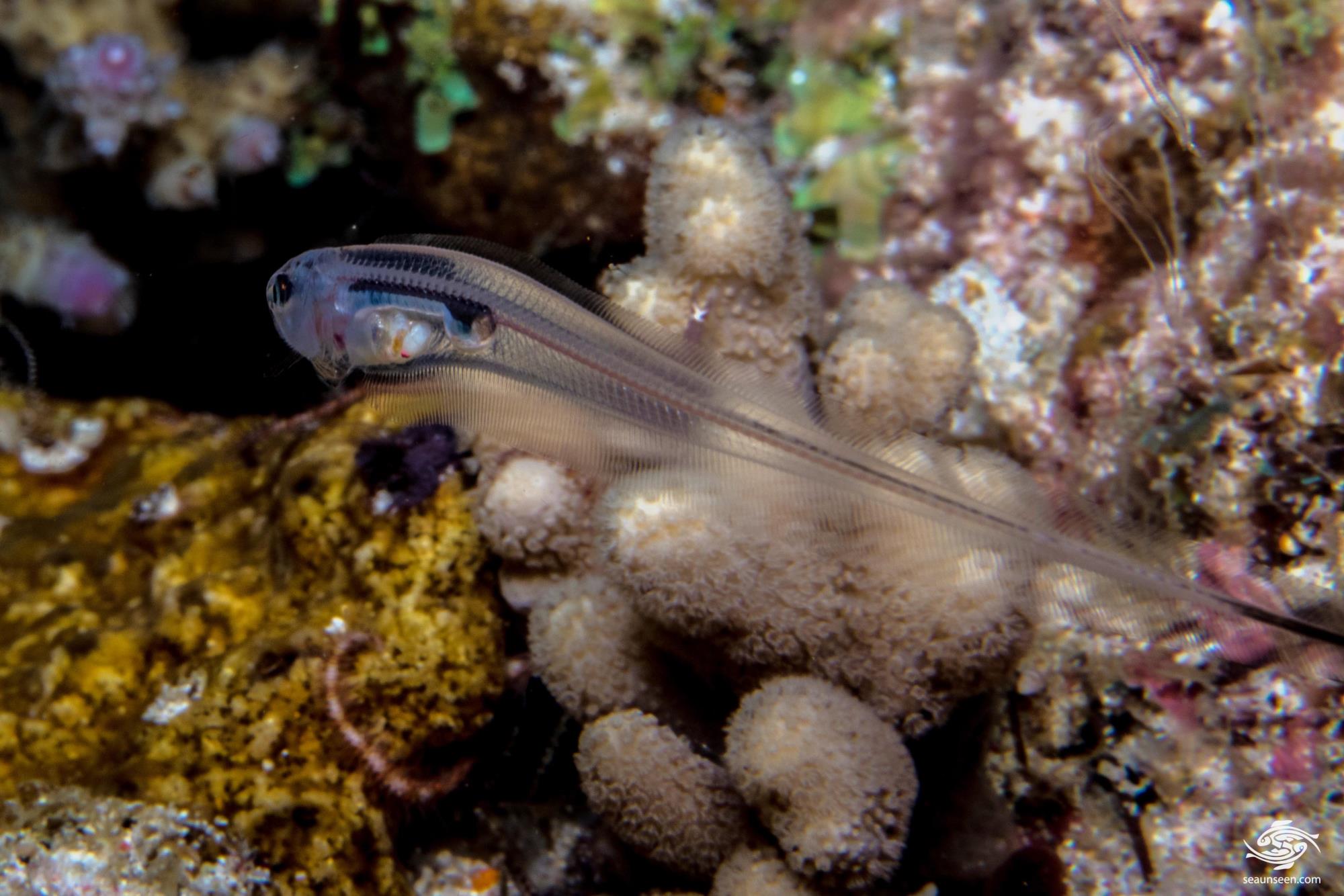 SILVER PEARLFISH IN THE WILD

We have observed Silver Pearlfish on night dives from 19h30 onwards at night whilst on night dives on unprotected seaward reefs in depths of 8 to 14 meters.  When one sees them there are normally a few specimens around and they swim away from the lights, but they do feed on planktonic matter while swimming out the lights.  To photograph them one must turn ones lights away from them and swim up to them and then go for a quick image.

During the intermediate phase after transforming from larvae, they seek protection from the sea cucumbers and enter the coelom of the sea cucumber.  During this stage they may be parasitic, but as they grow into adults so analysis of their stomach content shows that they feed on planktonic matter such as small Silver Pearlfish and crustaceans and the relationship with the host is commensal.  This hypothesis is backed up by their teeth structure and they have a row of small teeth on the upper jaw and in the lower jaw the teeth are longer and slightly curved backwards which indicates a carnivorous lifestyle. They have been documented as making sounds, however the actual purpose of these sounds is unknown but may be used for territorial or mating purposes. 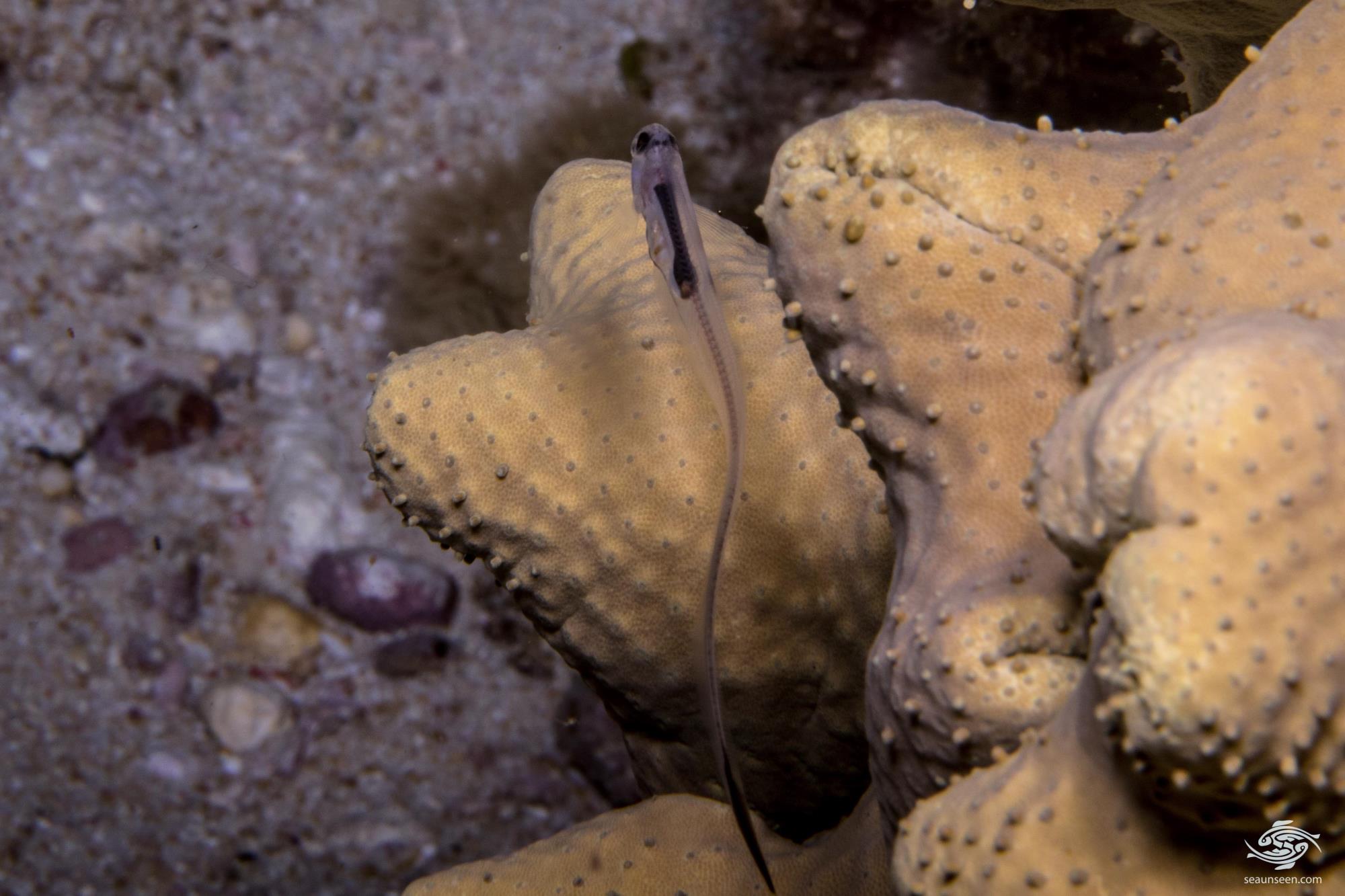 Silver Pearlfish are found across the Indo-Pacific area from the east African coast including the Red Sea across to the Society Islands and possibly Hawaii  and as far north as Taiwan and probably south to Tasmania. 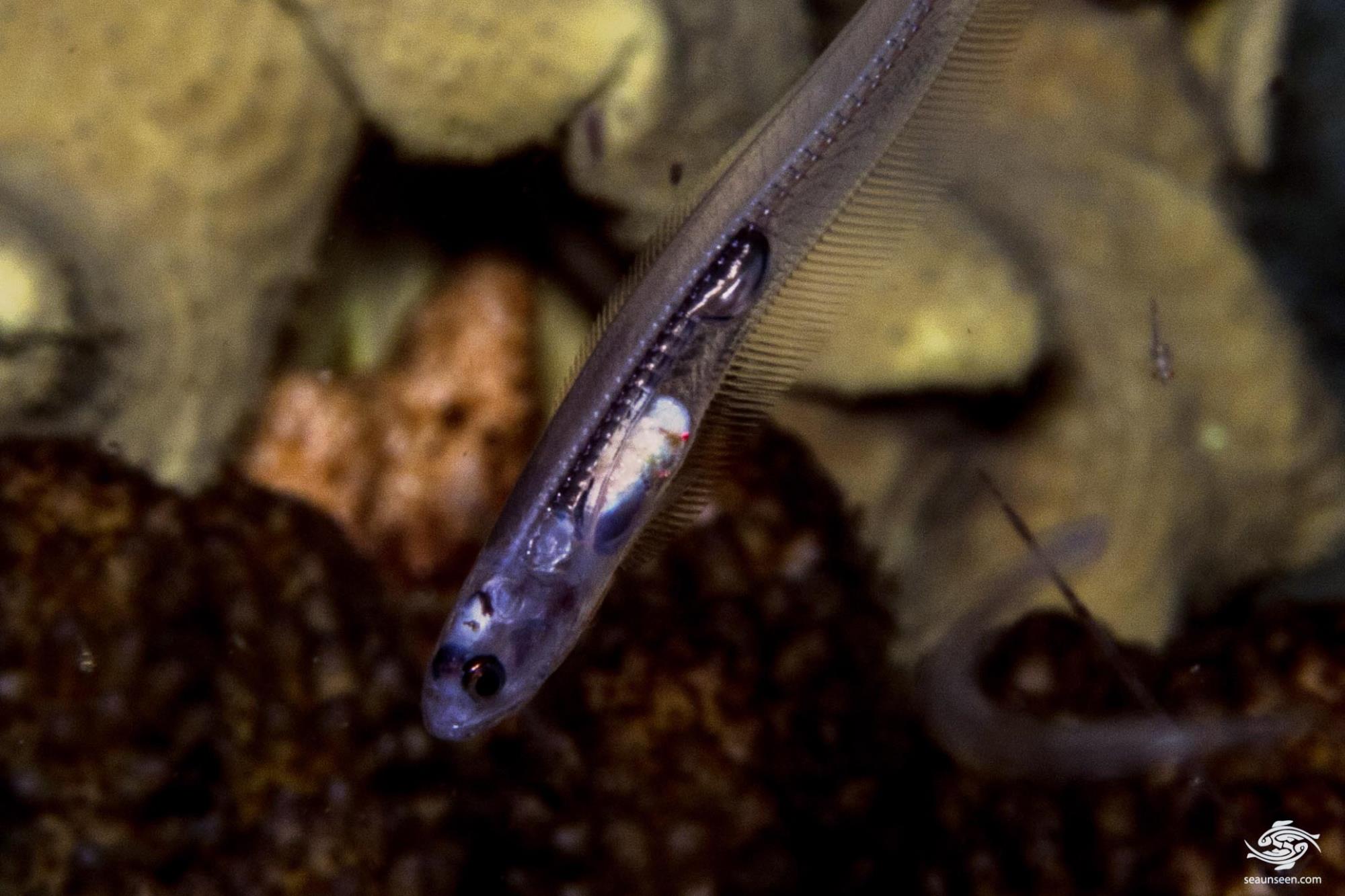 The adults appear to be carnivorous and stomach contents have included amphipod, shrimp and Silver Pearlfish. Interestingly when observing them diving at night and whilst they are swimming away from the lights, they deviate from a straight course away from the lights to pick titbits out the substrate. These sudden darts from course with an increase in speed indicate that although they prefer the dark, their eyesight is good under the lights and that they are selective with regards to their prey. Adults have been found with juveniles in their stomachs and this cannabalistic behavior probably takes place when the juveniles enter the sea cucumber seeking shelter. 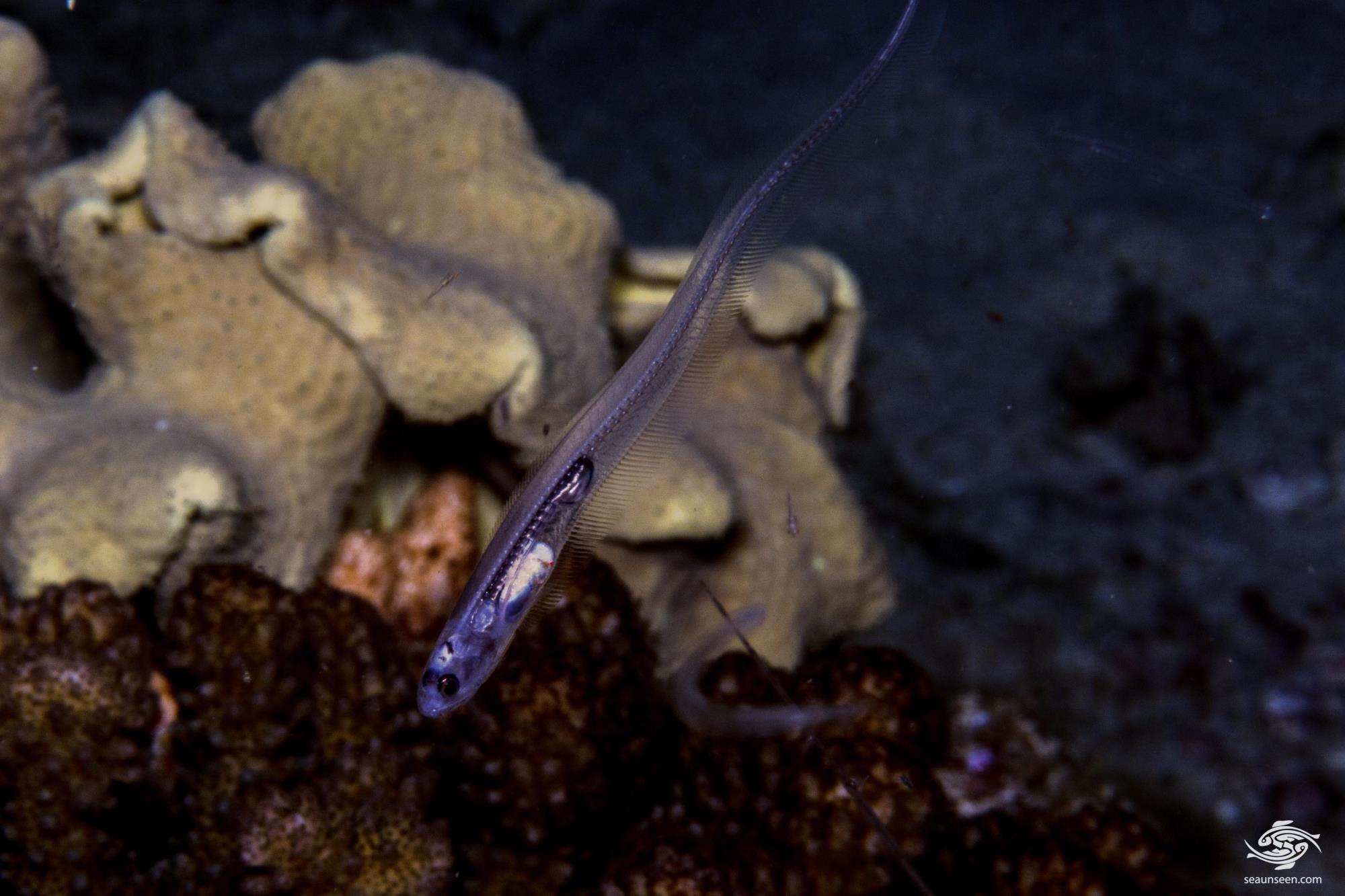 Very little is known of their breeding behavior, however mating is assumed by some to take place inside the sea cucumbers. That said we have observed specimens interacting with each other on night dives.  Silver Pearlfish have occurred on the nights of a full moon and on more than one occasion two specimens have been seen swimming alongside each other. This is probably a more logical mating sequence but requires more research. Research has indicates that they are usually found singular inside the hosts.