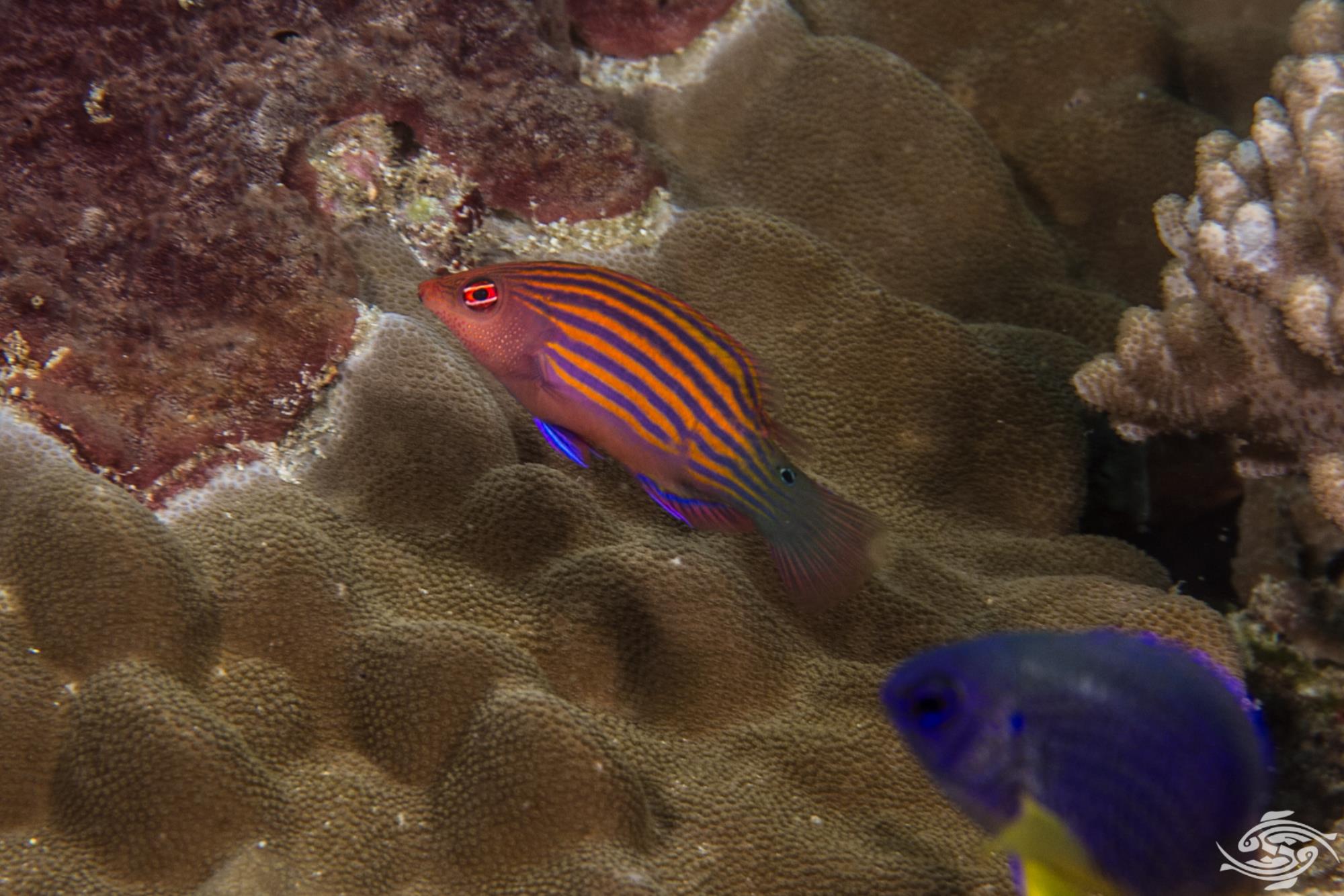 The Six line wrasse ( Pseudocheilinus hexataenia) also known as the Six Stripe Wrasse.  With its vivid purple and orange colouration it is an exceptionally pretty wrasse that stands out against the duller colours on the reef. They are remarkably shy and as a result are extremely hard to photograph well in the wild, because of their reclusive nature and habit of dashing into hiding. 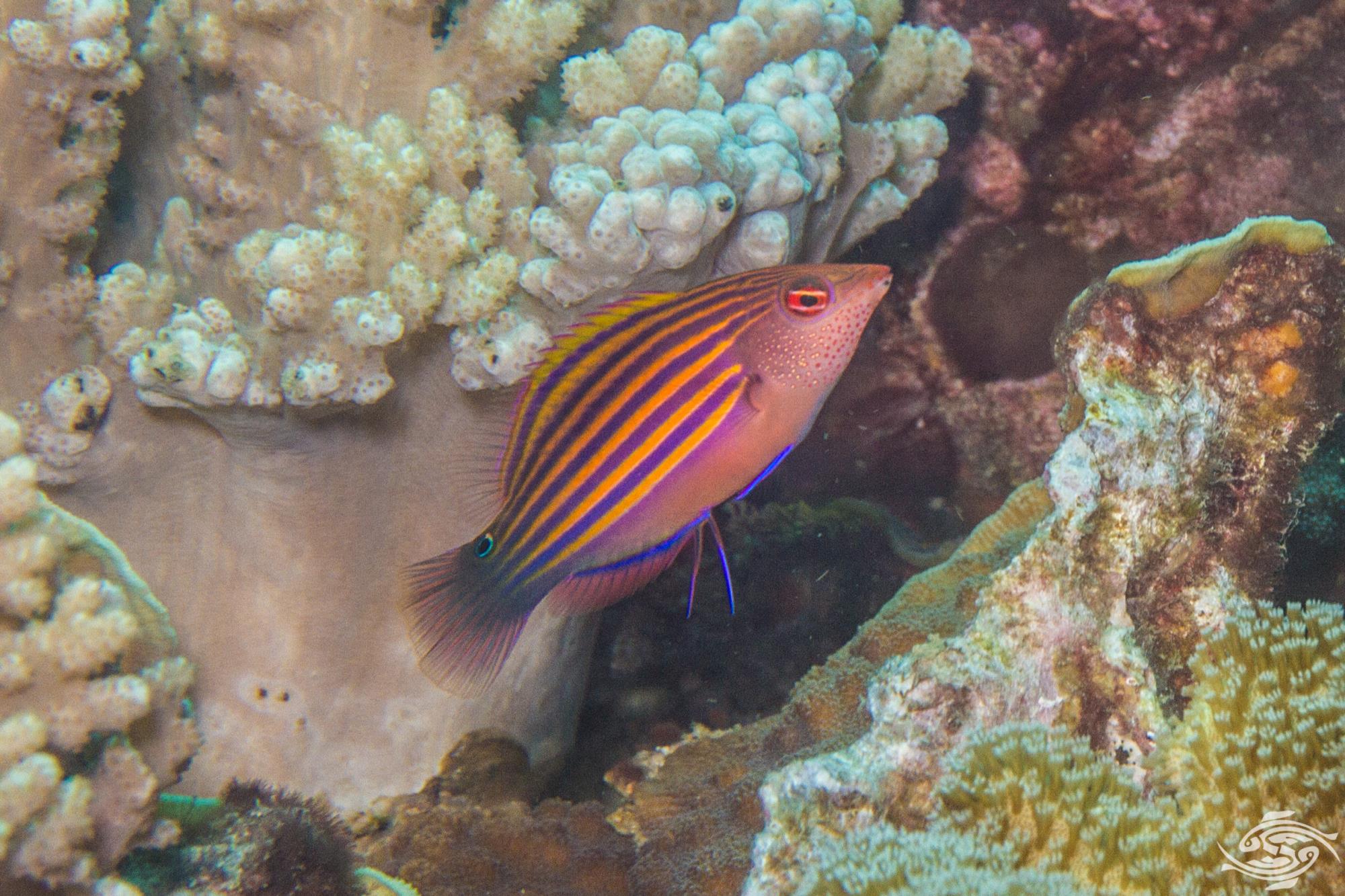 Six line wrasse have six horizontal purple stripes and six matching orange stripes across the body which extend back onto the tail. The area below and behind the eye is free of stripes and is a light orange and purple color with orange dots. The eye is ringed in a red orange color and has two white lines across it at a 45 degree angle. On the top of the caudal fin is a small black eye spot or ocelli ringed in light blue. 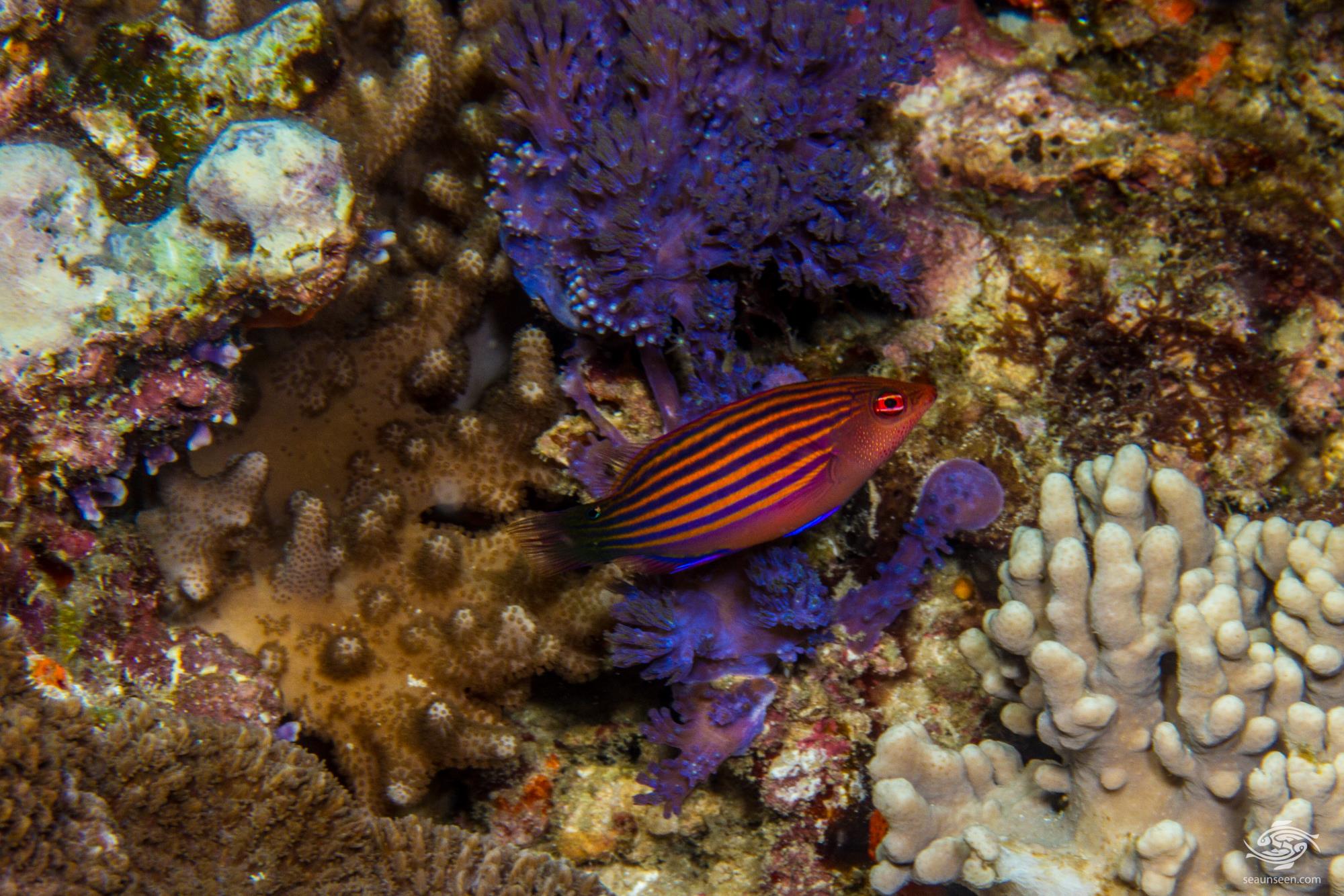 The Six line wrasse is fairly common on the east coast of Africa but they are extremely reclusive. One has to keep a sharp look out to see them and even then one often only catches a fleeting glimpse. Because they are shy, they are usually close to holes and overhangs low on the bottom. They nearly always quickly dart into hiding at the approach of a diver. More often than not they will remain in hiding and will not emerge quickly. They are usually singular but on rare occasions one might see a pair. 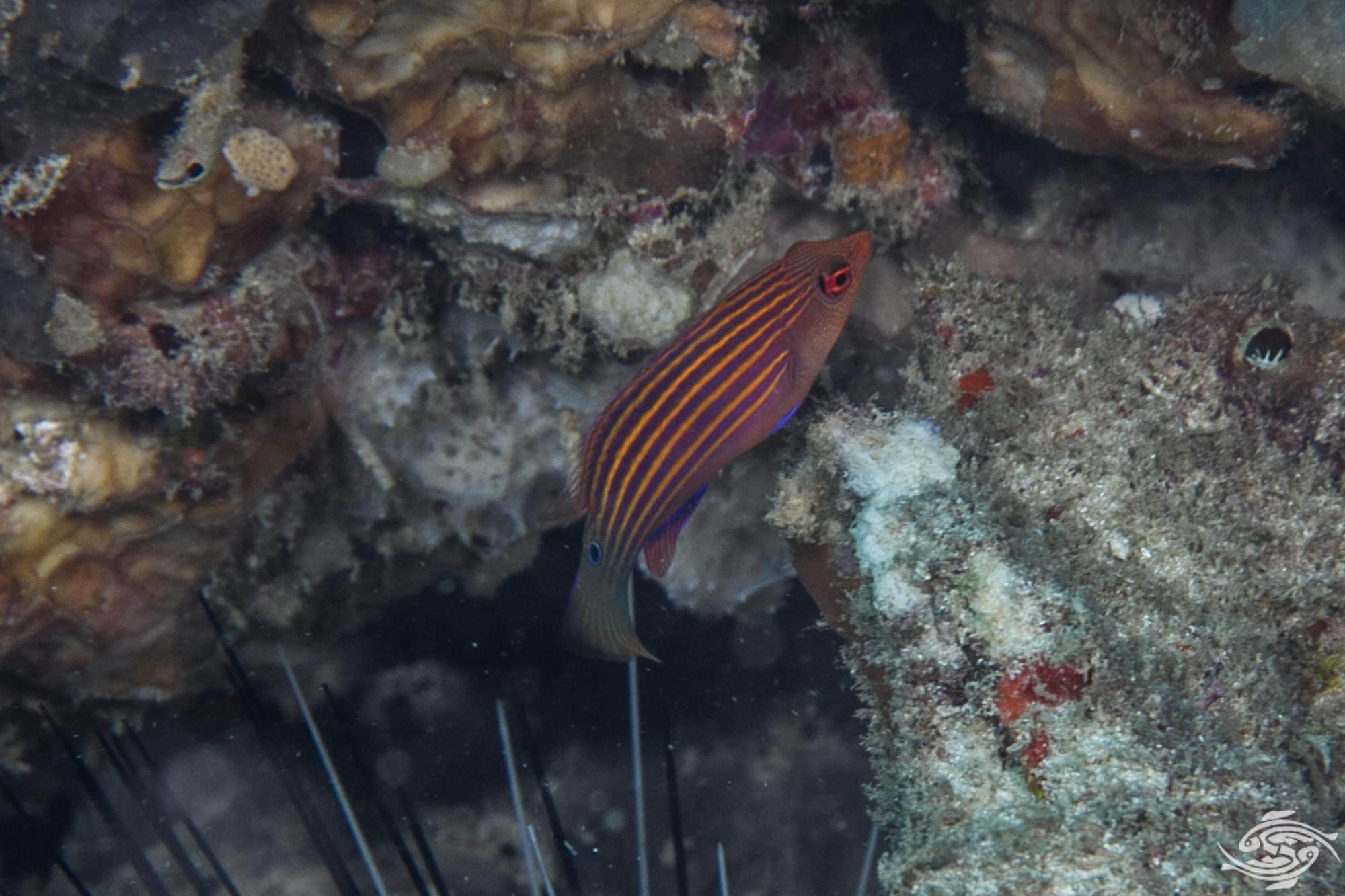 The Six Line Wrasse is found across the Indo Pacific are including the Red Sea and down to southern Kwa-Zulu Natal. Being reclusive they mainly prefer being close to corals and rubble and because of this seldom venture far from a good hiding spot. They are usually always low to the substrate and are never seen swimming above the reef. 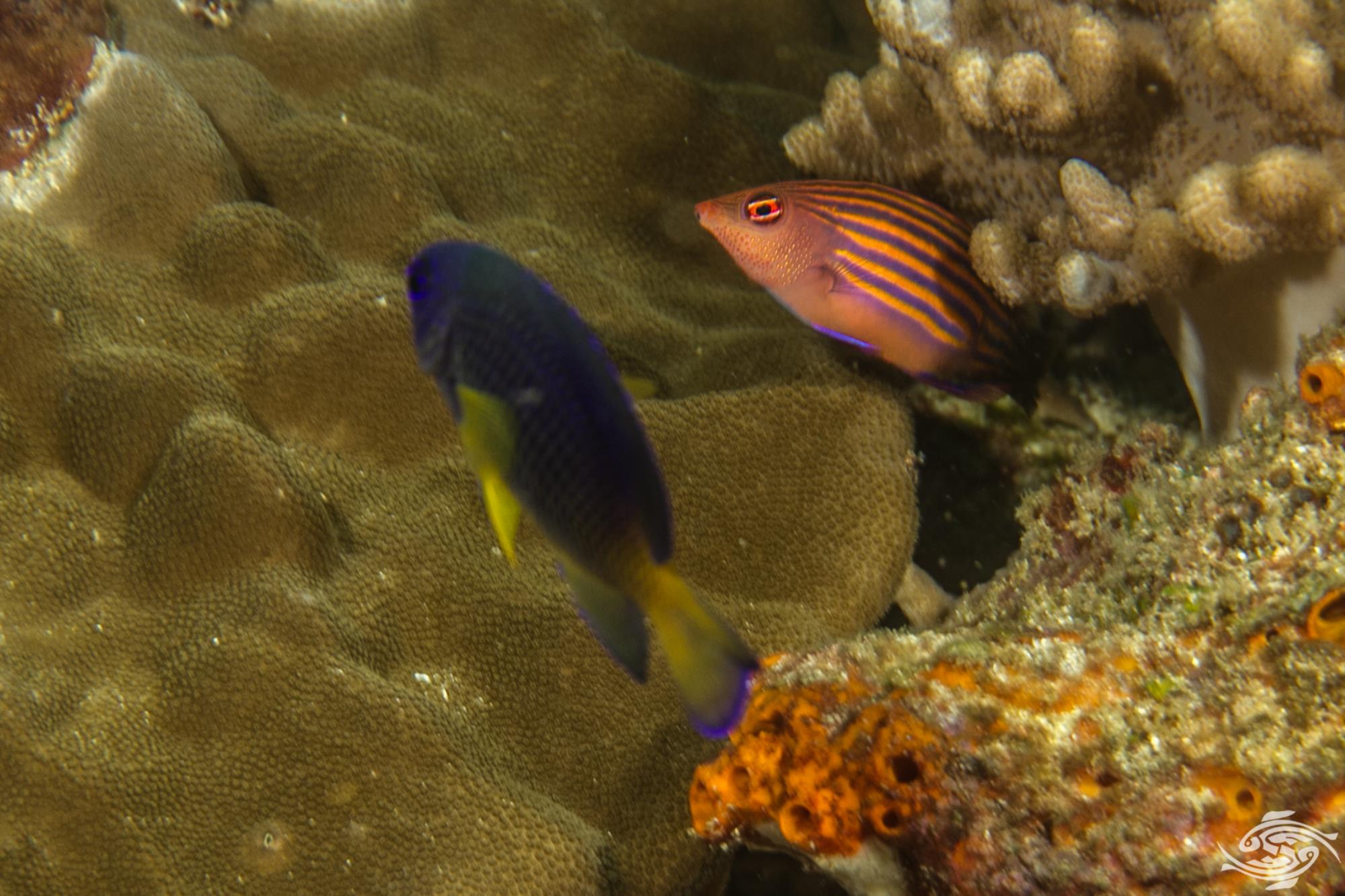 The Six line Wrasse feed on small bottom dwelling invertebrates that they pick off with their pointy mouth. 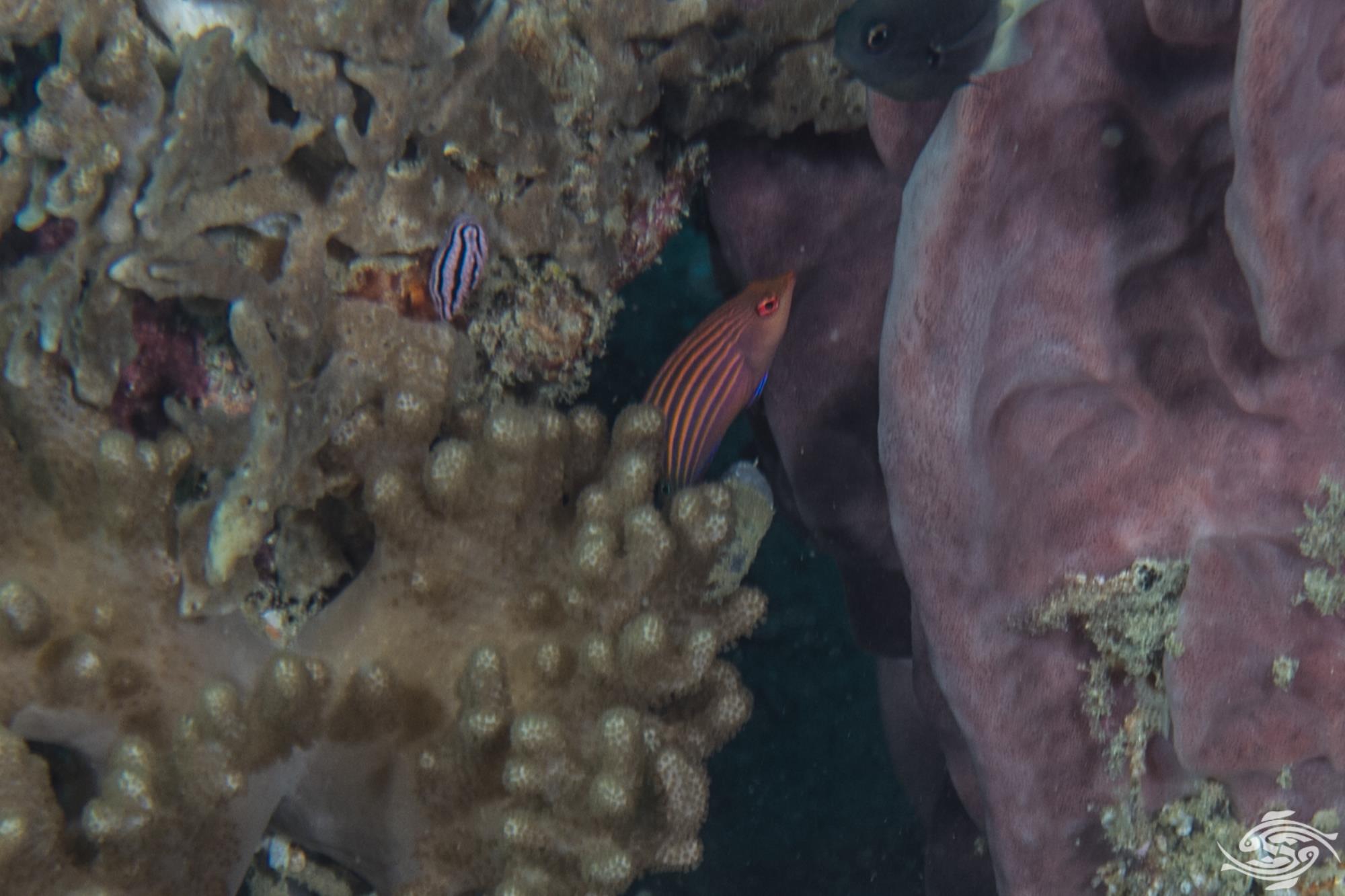 Little is known of their reproductive habits, but they are protogynous hermaphrodites and larger specimens will be males who will be more vividly colored. Only on very rare occasions and usually in spring or summer, have I seen more than one together and when I have one has been larger than the other. Possibly this has been pairing taking place but one cannot be certain. 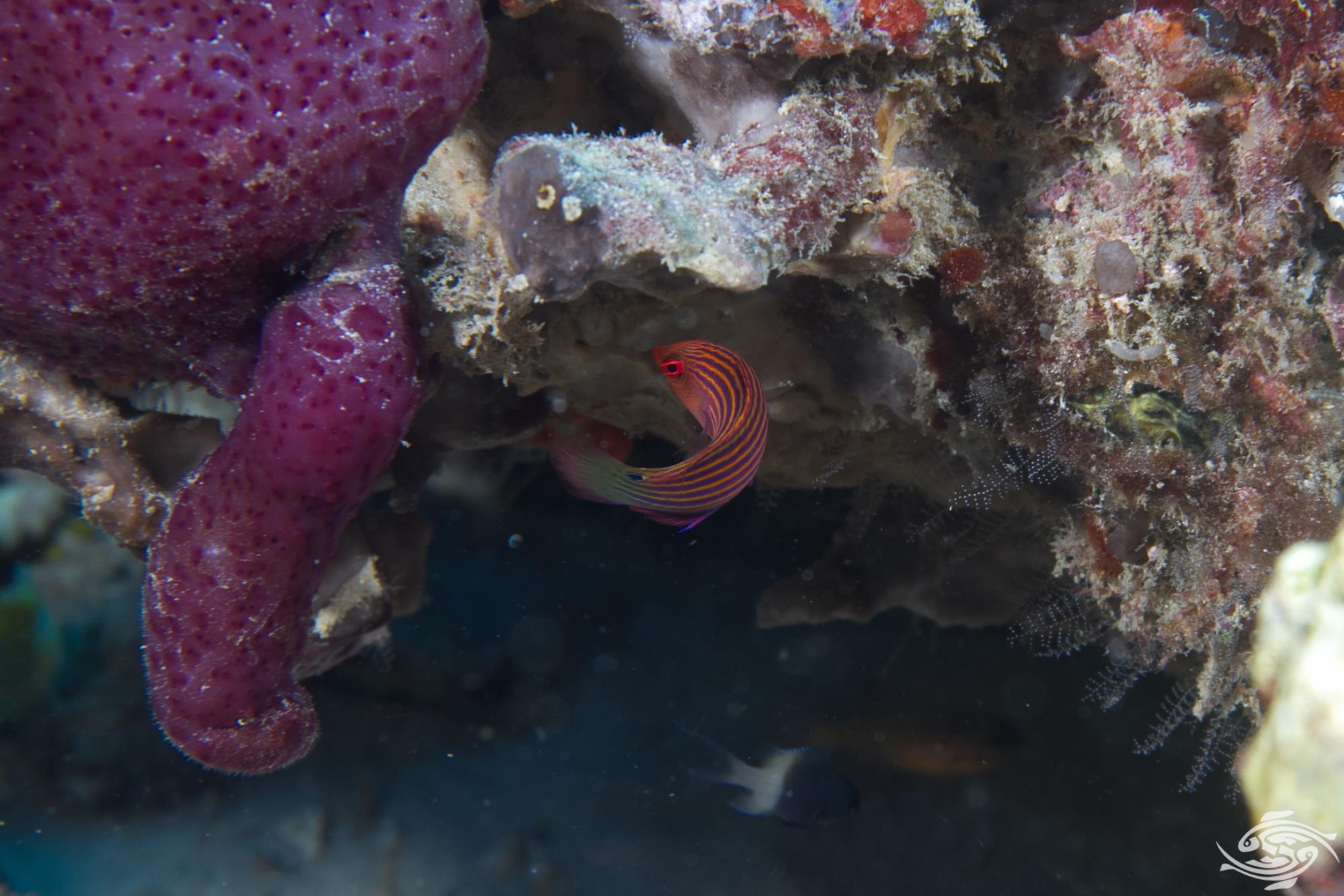 Six Line Wrasse are commonly kept in aquariums and because of their striking coloration make an interesting asset to certain types of aquarium. As a result of their reclusive nature they require a large number of hiding places and prefer to move around from cover to cover. Even when acclimatized to a tank they are highly reclusive and as a result do not commonly swim in the open. Because small crustaceans form part of their diet do not be surprised if your smaller crustaceans disappear. They may also bully less aggressive fish and care needs to be taken choosing their tank mates. There is an excellent article on keeping these fish in aquariums which sets out the advantages and the pitfalls here. Before purchasing one it would be a good idea to read it. Regular offerings of live rock with live food on are good for supplementing their diet. 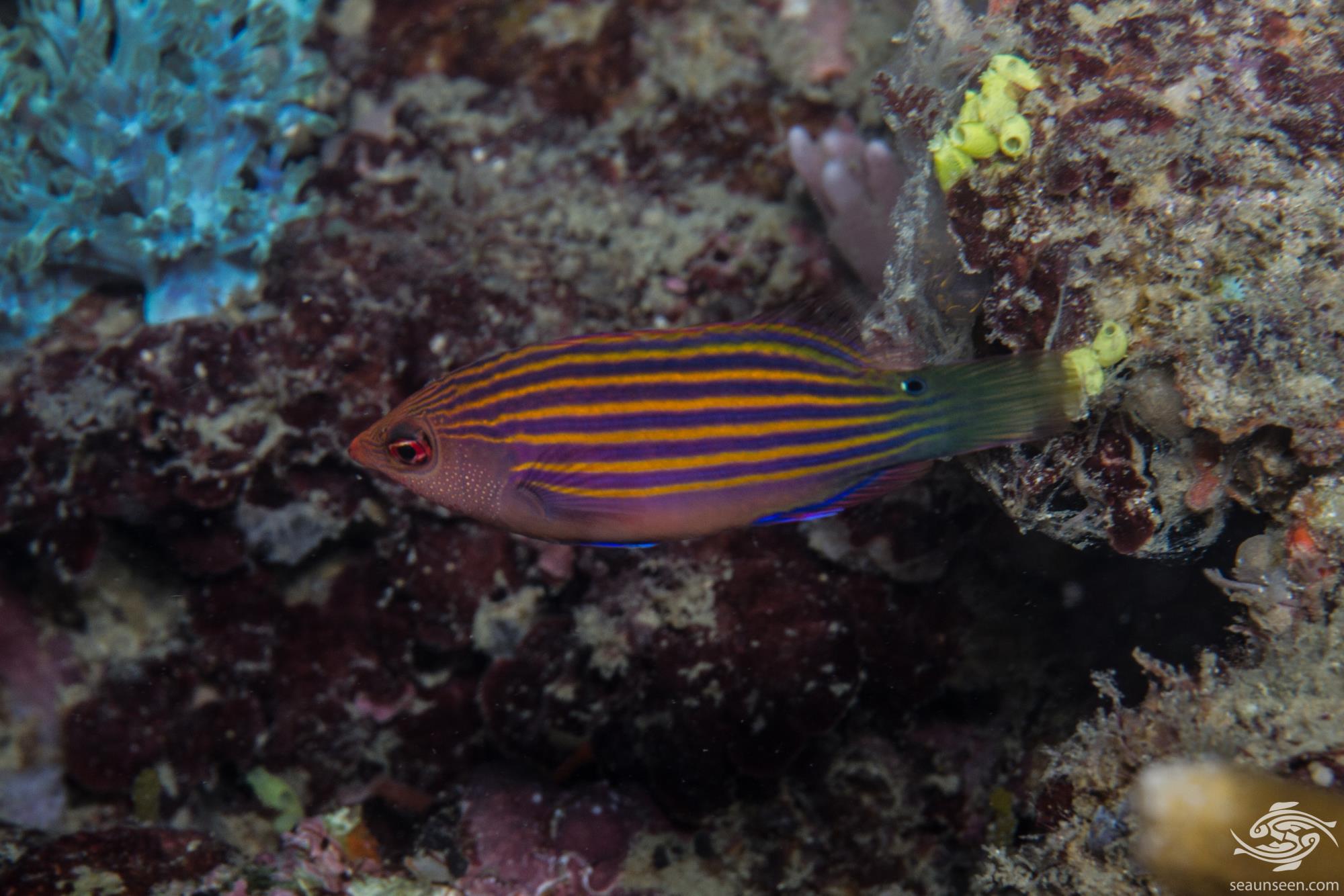 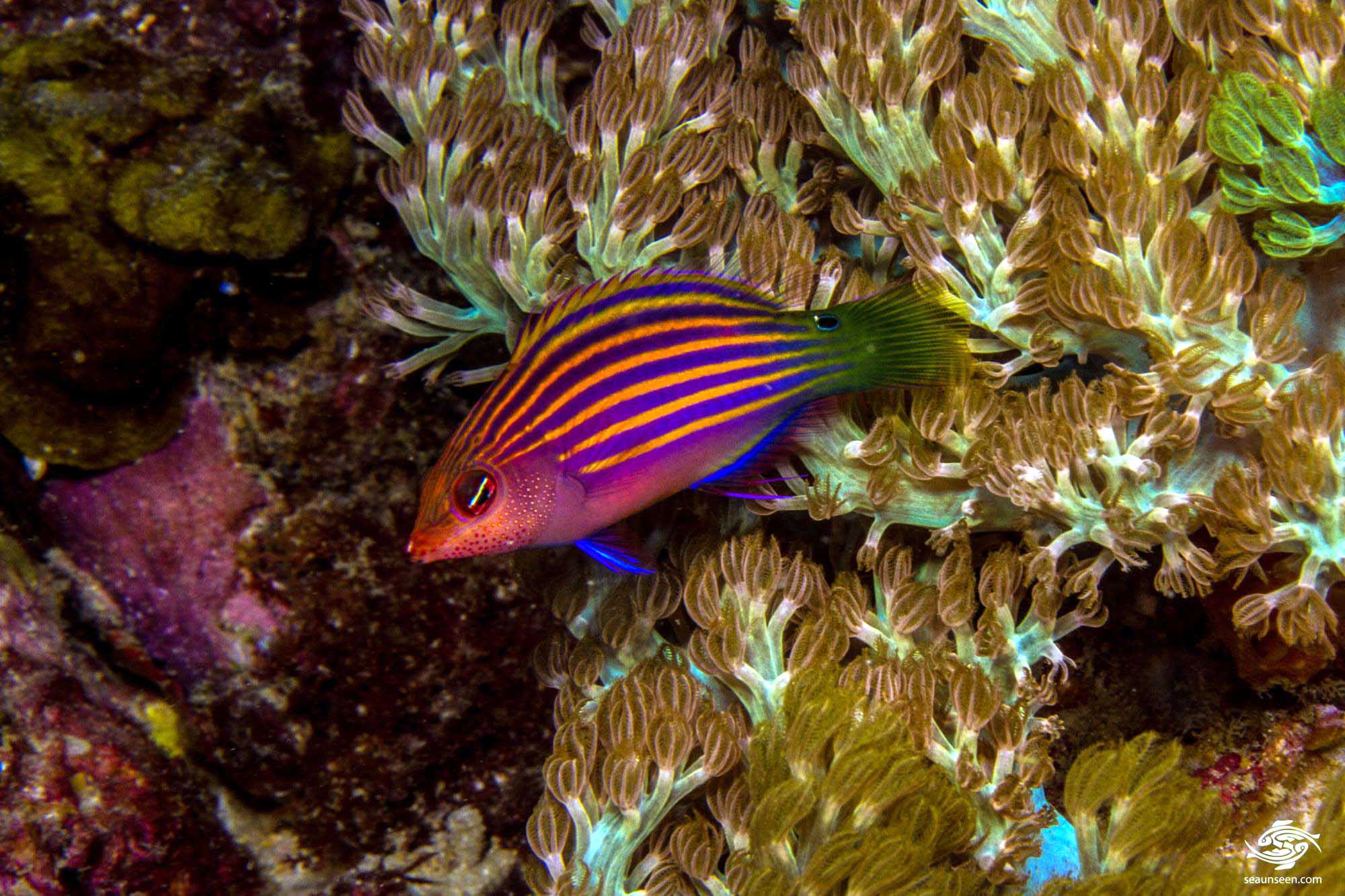