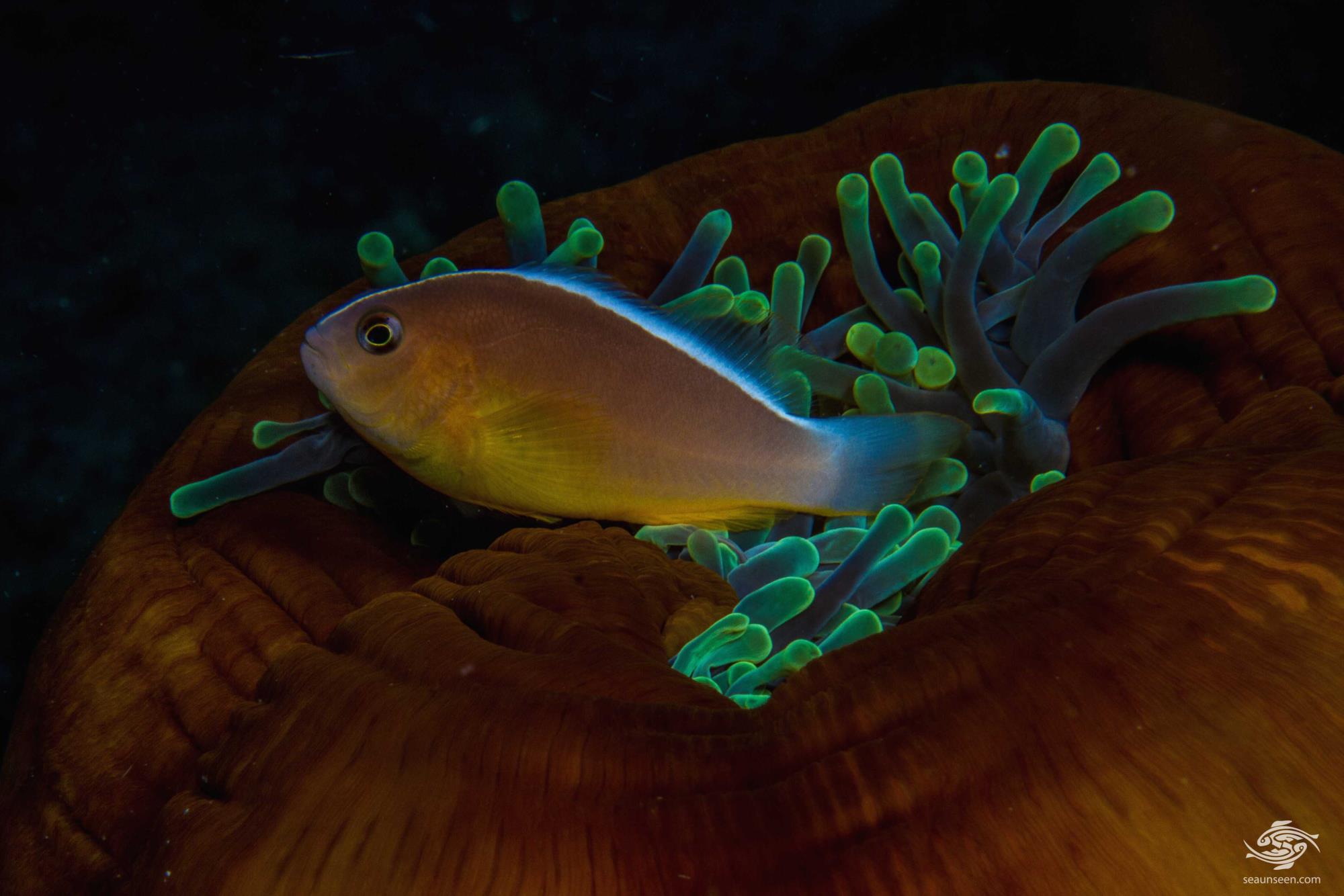 The Skunk clownfish (Amphiprion akallopisos) or nose striped anemone fish is a common inhabitant on Tanzanian reefs. Skunk clownfish get their name from the long white stripe that runs along the top of the body.

The skunk clownfish is a light pinkish orange color, with a single, narrow, white stripe running from the mouth to the back of the tail fin and can grow as large as 11 cm in length.  As with other anemonefish, the skunk clownfish is a protandrous hemaphrodite, and maintains a hierarchy within the host anemone that consists of a mating pair, of which the female is the largest, and non-mating males which get progressively smaller in size. 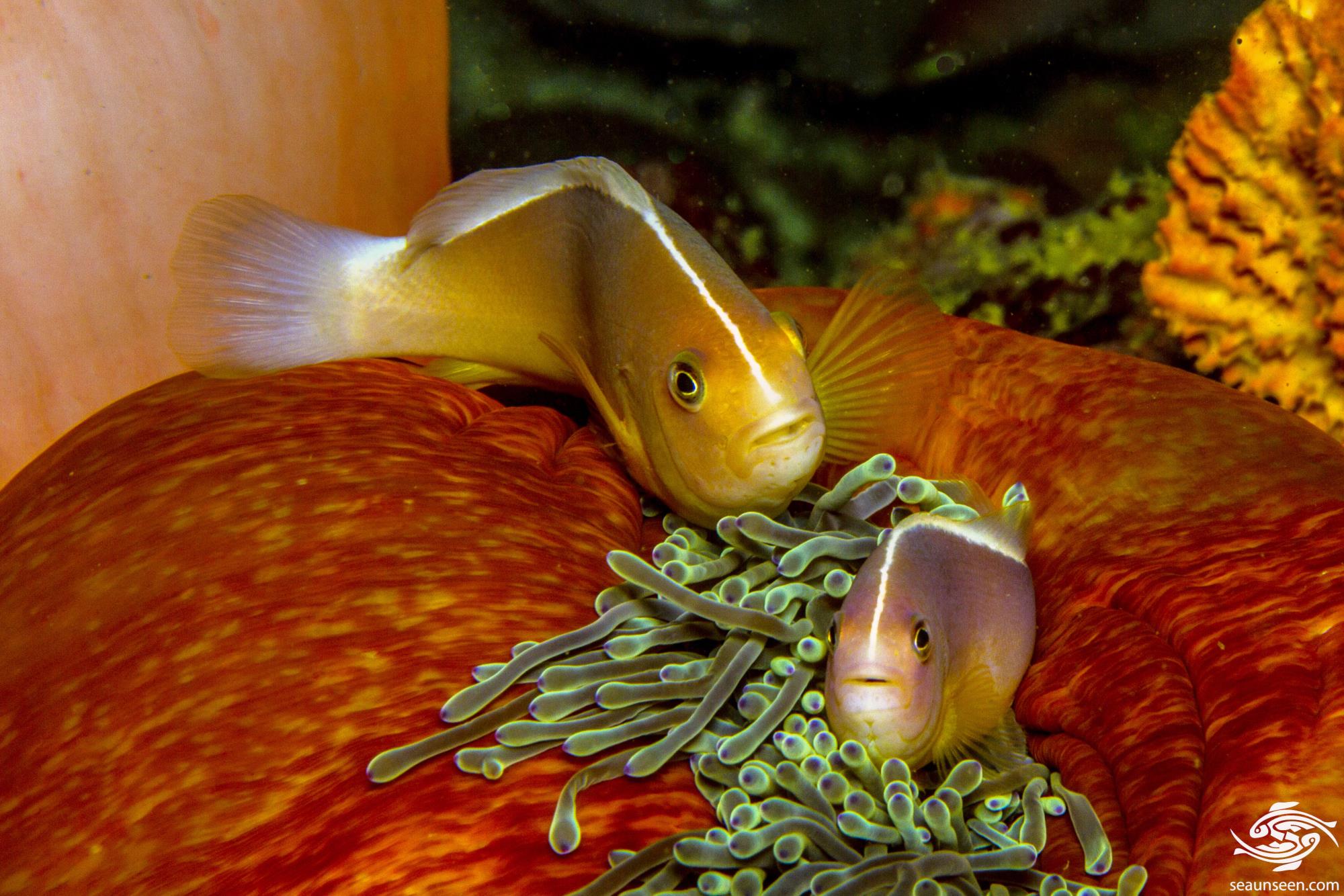 The Skunk Clown are found across the Indo-West Pacific area from East Africa, Madagascar, Comoro Islands, Seychelles, Andaman Sea, Sumatra and the Seribu Islands (Java Sea). It is not found in the Maldives and Sri Lanka. In Tanzanian waters they are mainly found in the Magnificent anemone (Heteractis magnificae) and reside in waters from 1 to 15 meters with a moderate to strong current. 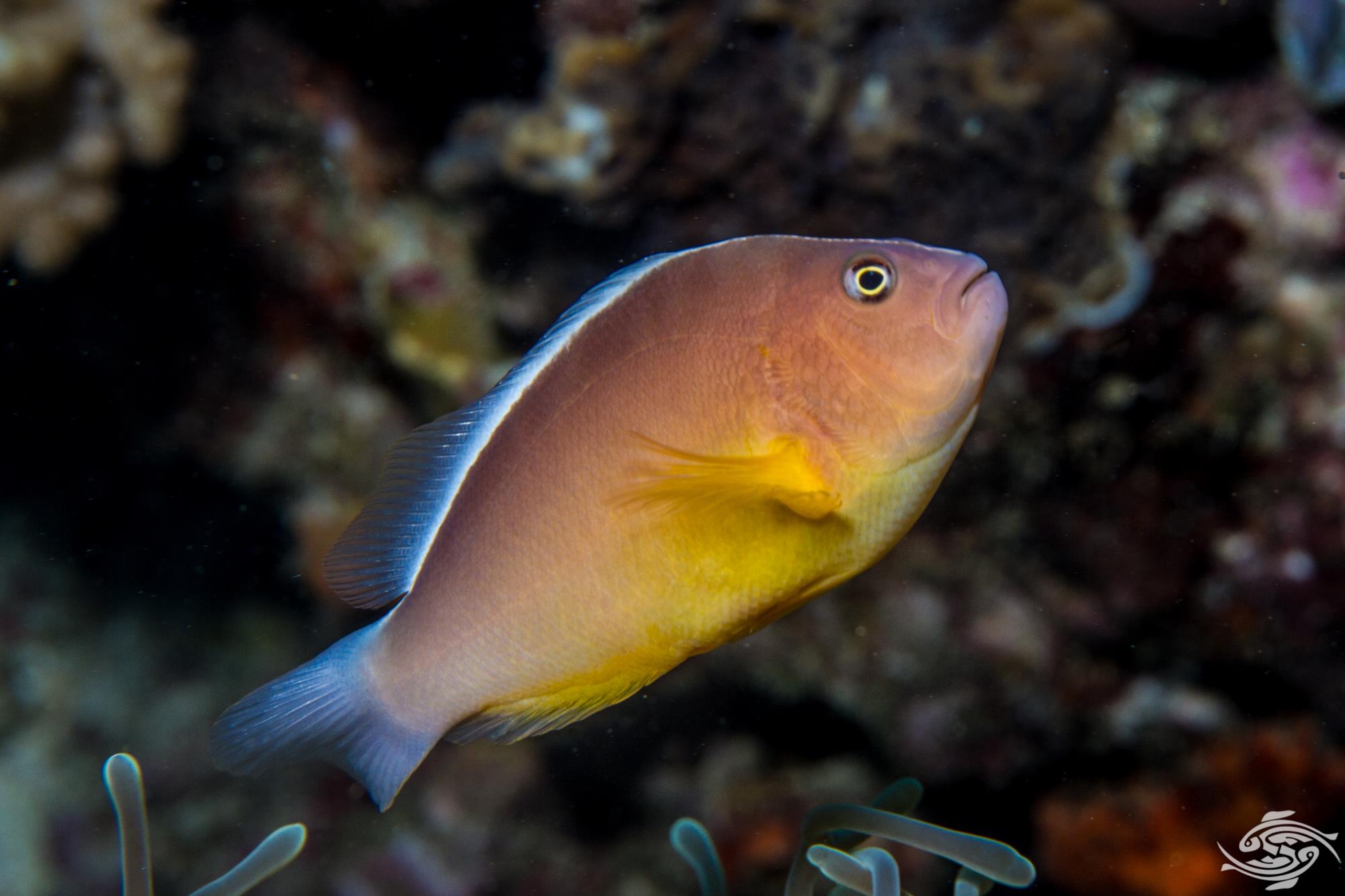 The Skunk Clownfish are omnivorous and can feed on undigested food from their host anemone. Primarily however they feed on small zooplankton in the water column, such as copepods and tunicate larvae, with a small portion of their diet coming from algae. 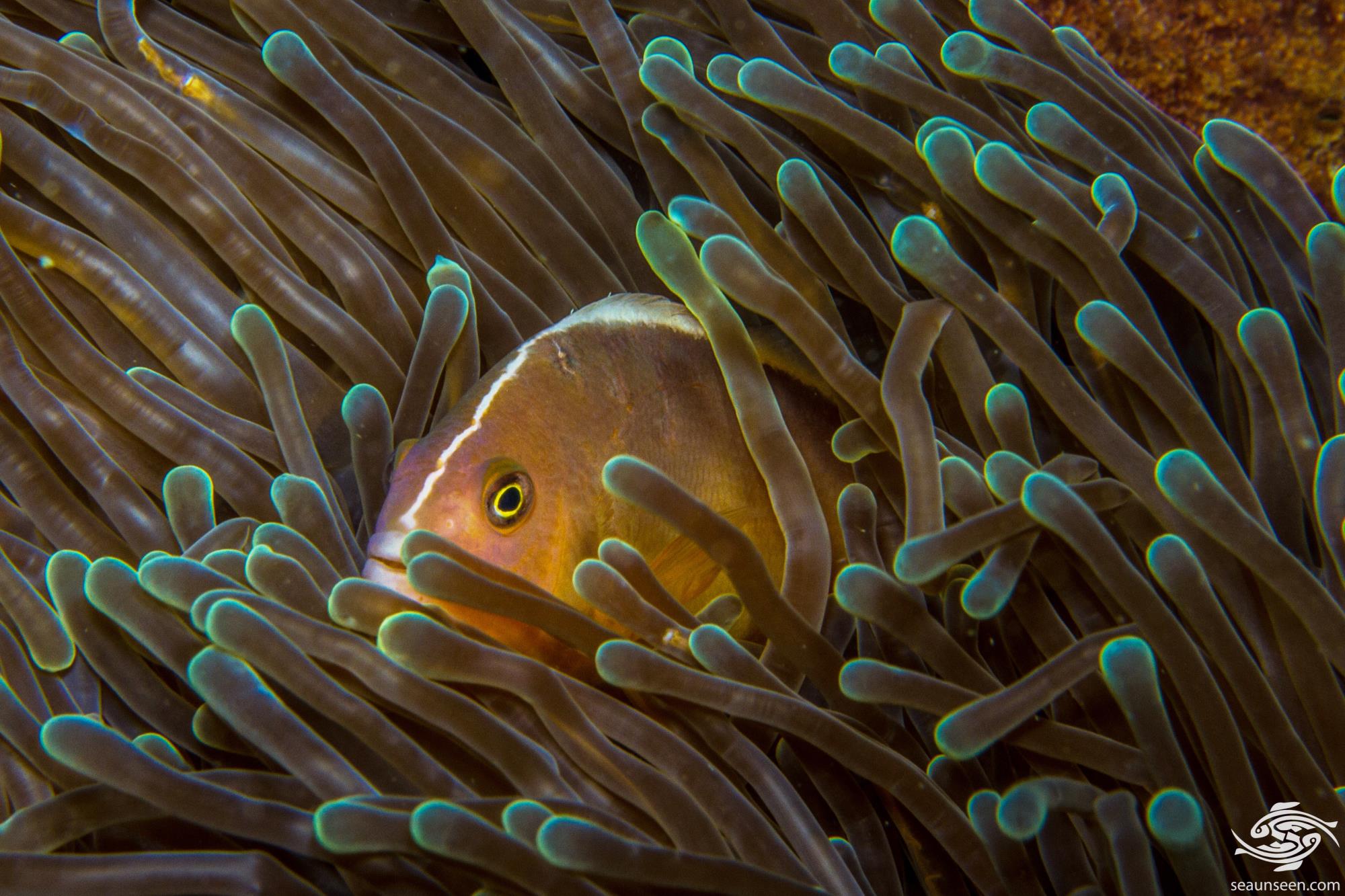 In a group of clownfish based in an anemone, there is a very strict hierarchy. The largest and most aggressive fish, the female is found at the top of the pecking order. Clownfish are sequential hermaphrodites, in that they develop into males first and when they mature they become females.

Only two fish, the dominant male and the female, in a group reproduce through external fertilization. The eggs are laid around the time of a full moon alongside the host anemone often underneath a fold alongside the pedal foot. The male parent tends the eggs. 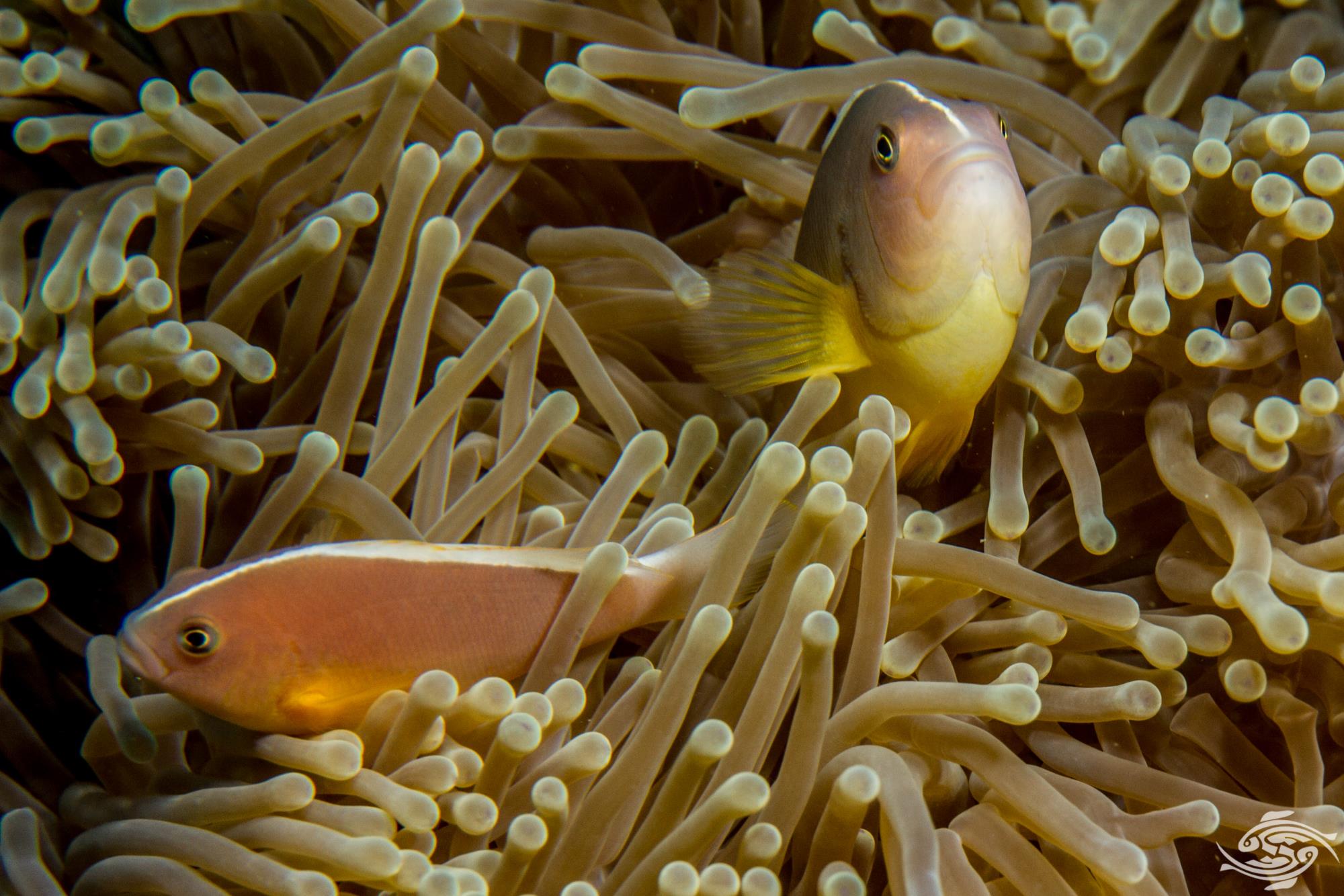 The skunk clown, and some other clownfish, use sound to defend their territory mainly when reproducing and when eggs have been laid. Noises resembling pops and chirps are heard when interacting with invading fish and divers who invade the territories. Studies have shown that it is the female that defends the anemone using sound, as well as a physical attack accompanied by bites which feel similar to a hard pinch. They use three different types of sounds, pops, short chirps, and long chirps.

Their territory extends some five to seven meters around their anemone . When not spawning they are generally fairly docile towards divers and will retreat to their anemone for protection. 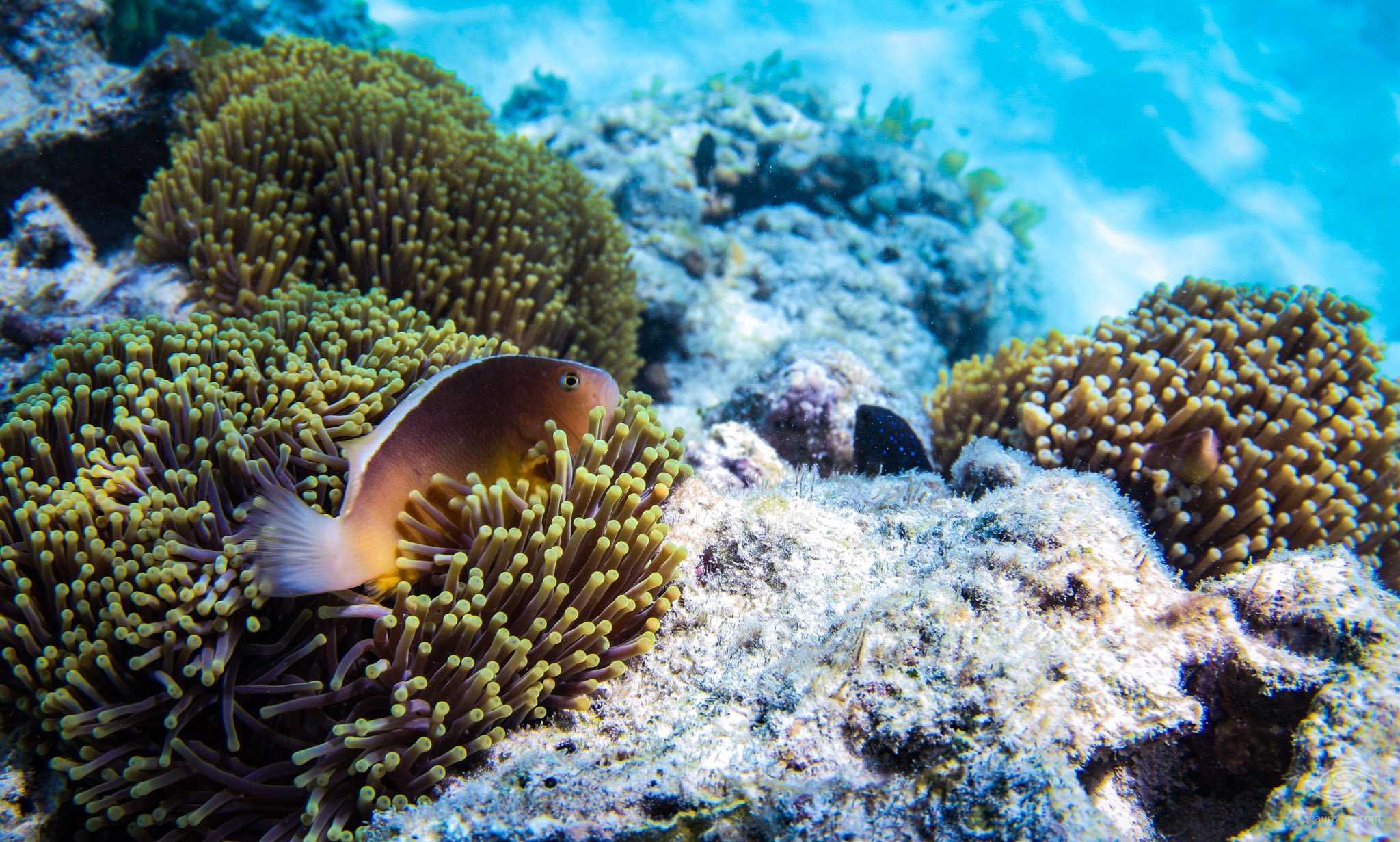 Skunk Clown are kept in aquariums and are reef safe, being happier if they have an anemone and are very hardy and easy to keep and are great for beginners. They have been bred in captivity and captive bred specimens are available and it is preferable to purchase captive bred specimens. They may pick on passive fishes that have been added after them particularly during spawning . Their relatively small size ( 11cm)makes them a suitable choice for smaller aquaria. 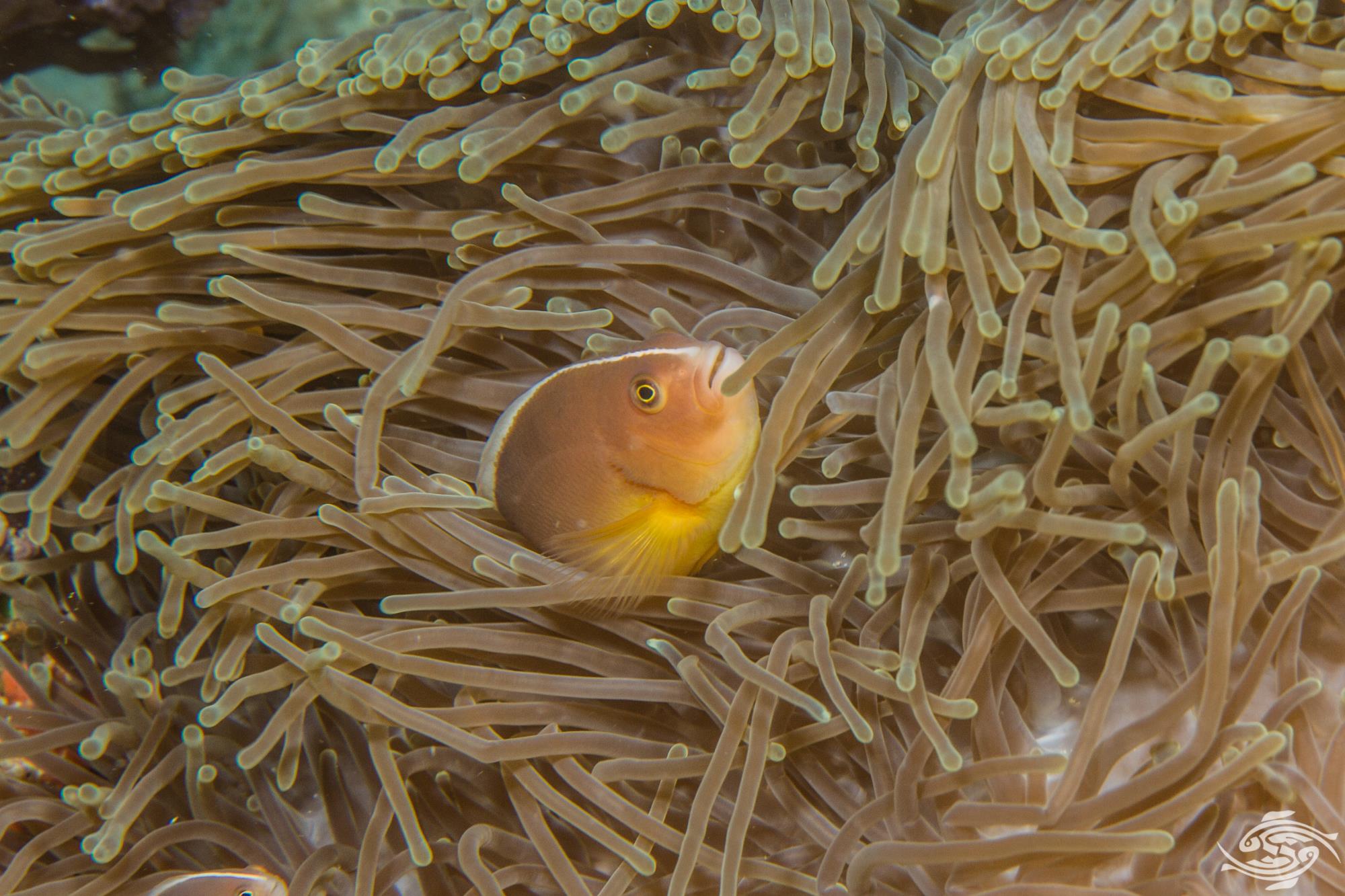 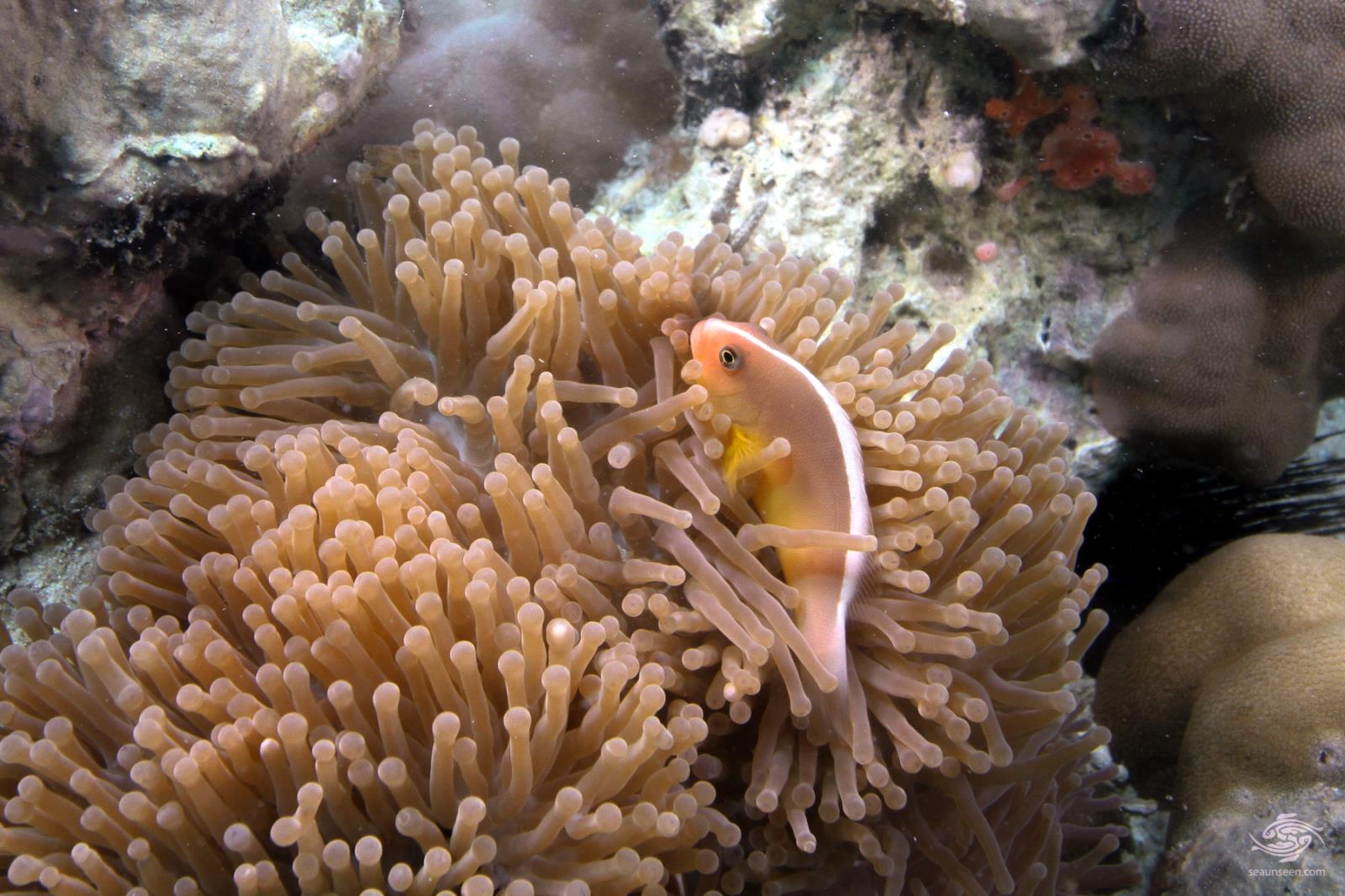 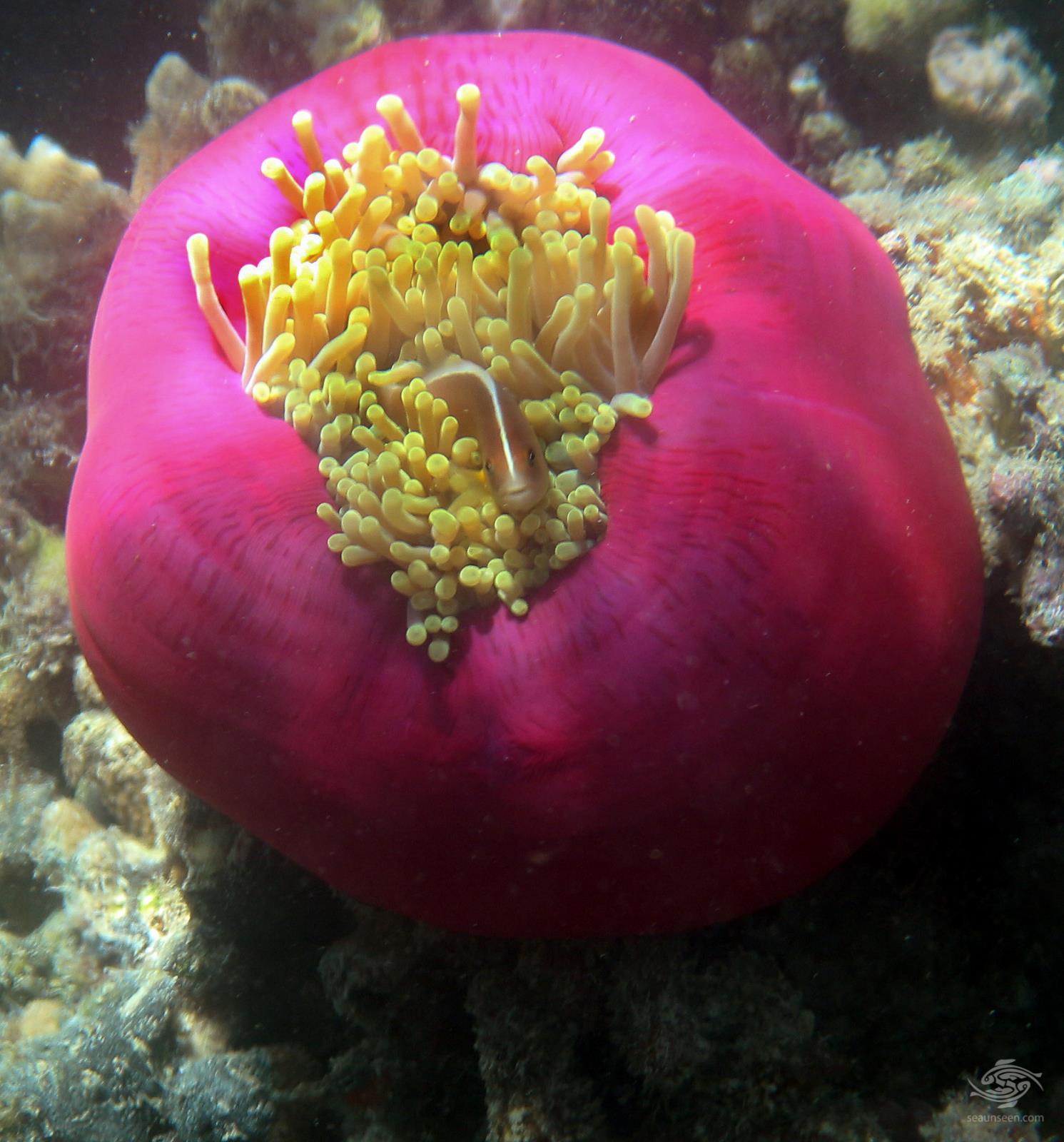 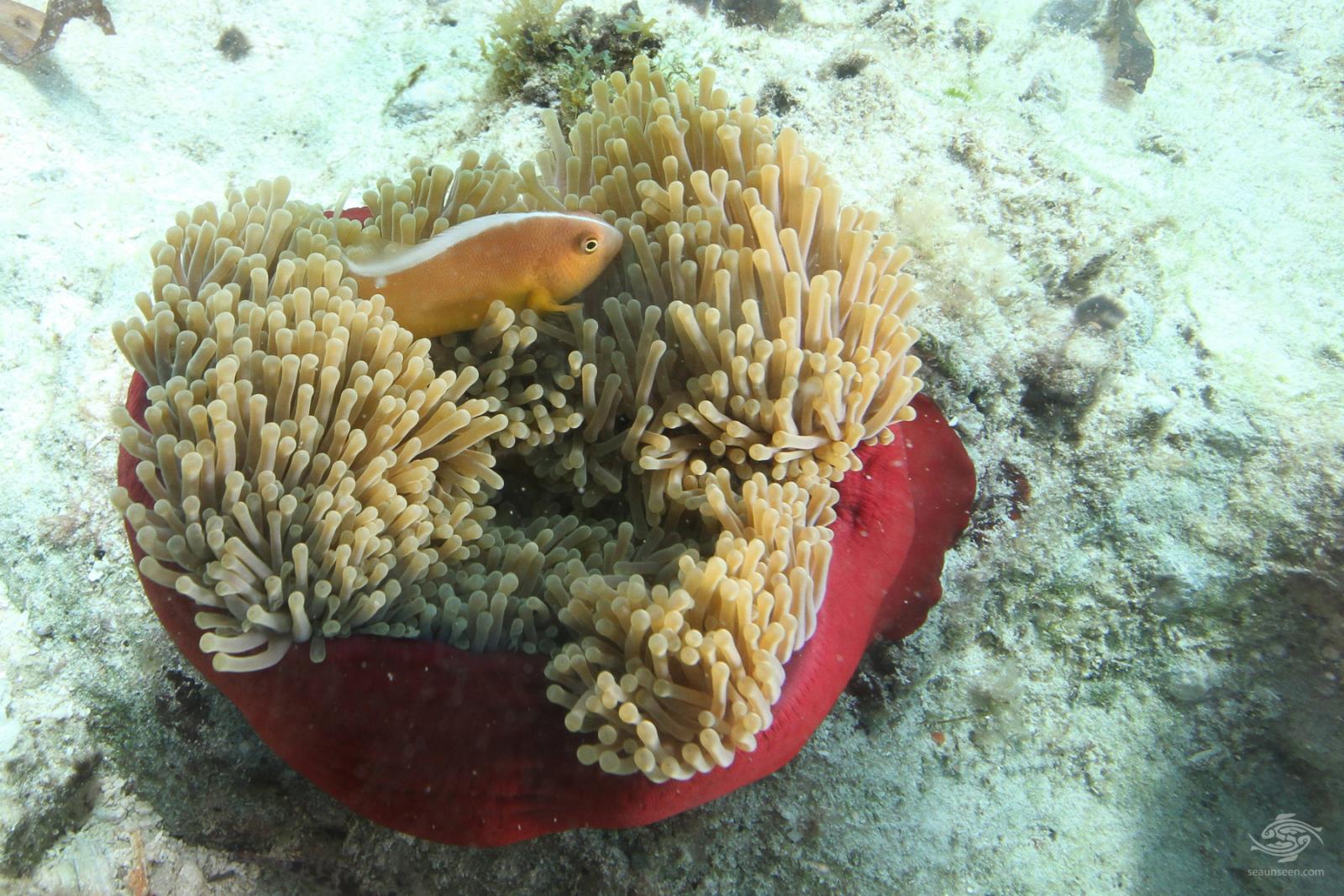