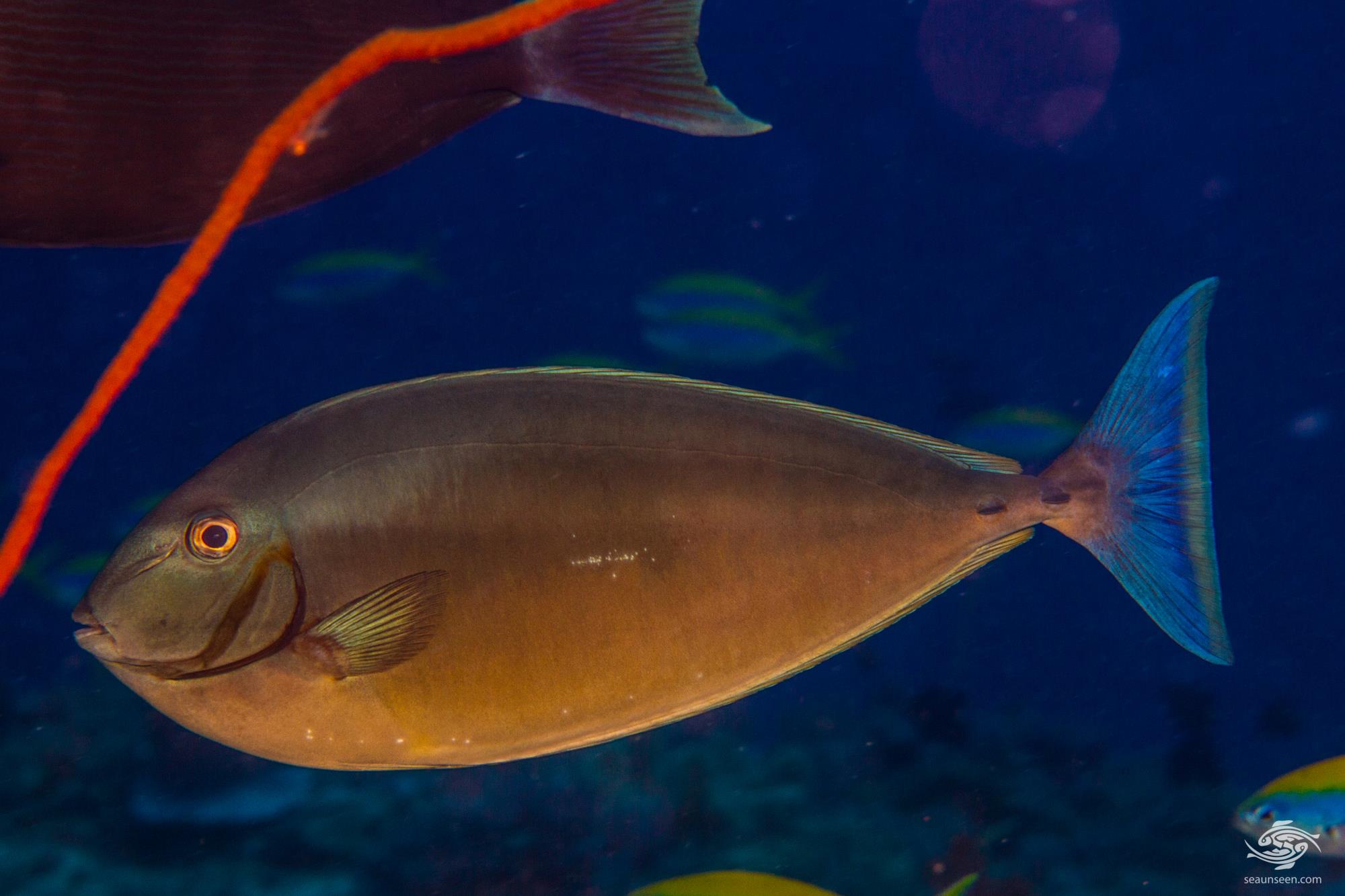 The Sleek unicornfish (Naso hexacanthus) is also known as the Blacktongue unicornfish. In terms of numbers they are probably the most numerous Unicornfish in Tanzanian waters.

Fishes within the Acanthuridae family have blades on their tails. The Acanthurus genus are known as Surgeonfish and those that fall within the Naso Genus are known as Unicornfish.  Although both have blades in the caudal area, Unicornfish have two blades. The blades are used for defense and possibly in territorial disputes and can inflict significant damage. The blades are reported to contain toxins but there seems no scientific evidence for this. 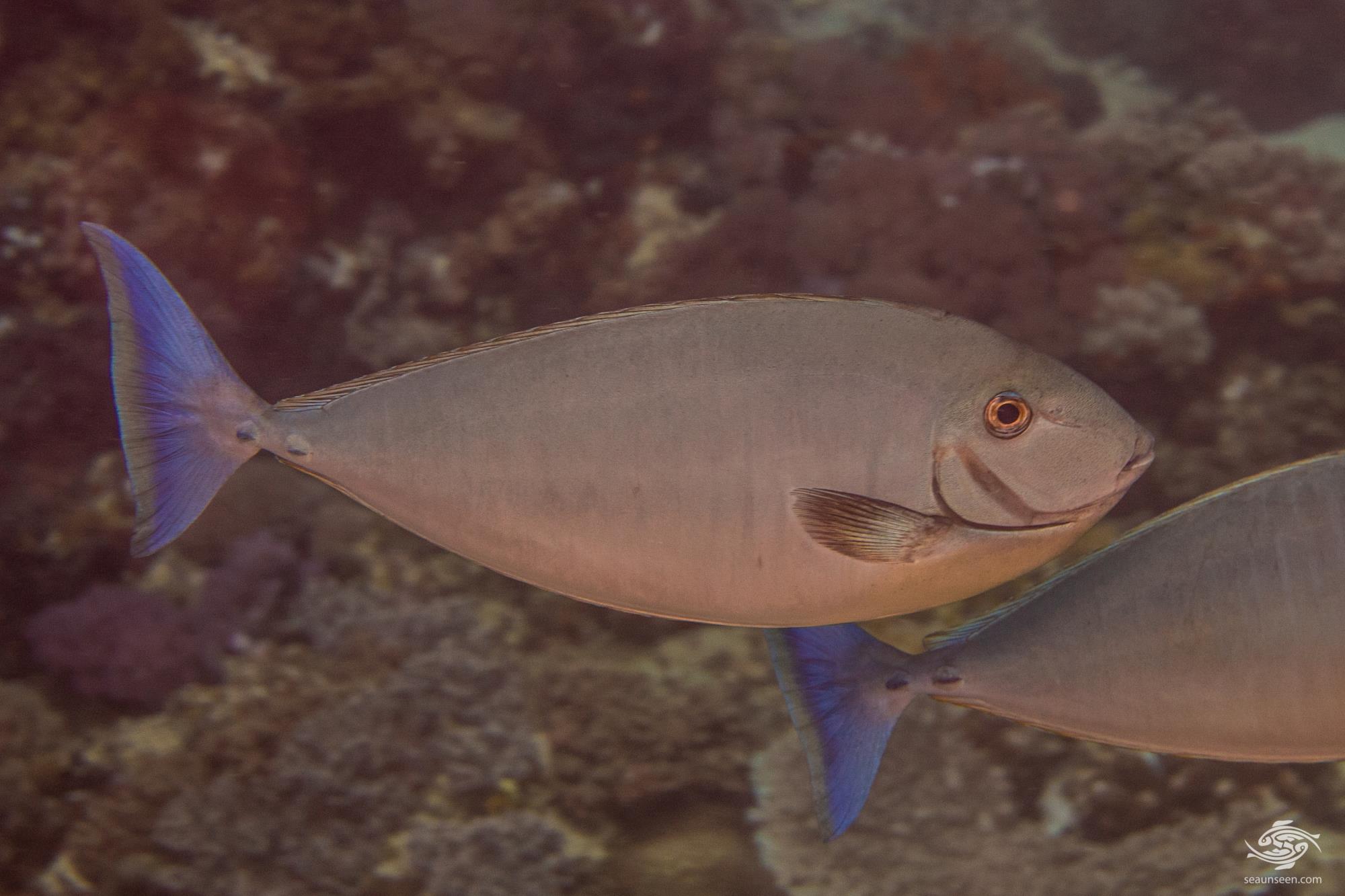 The Sleek Unicornfish has an oval shaped body that is laterally compressed. The mouth is forward  on the body and the eye is set quite far back on the body thereby protecting the eyes while feeding. They are one of the few Unicornfish with no horns.

The colors are highly variable and they are capable of changing colors dependent on mood. The normal base color is a light brown colour with a blue caudal fin with a light yellow edge. They can however change the body color to a blue or silver blue color. There is a black line around the gill plate which is distinctive to identifying them in the Indian Ocean. In the Pacific they can be easily confused with the Grey Unicornfish ( Naso caesius) which has similar facial markings.

As with all Unicornfish they have two blades in the caudal area and they grow up to 60 cm in length but around 50 cm is more common in the wild. The blades are larger on males than on females. 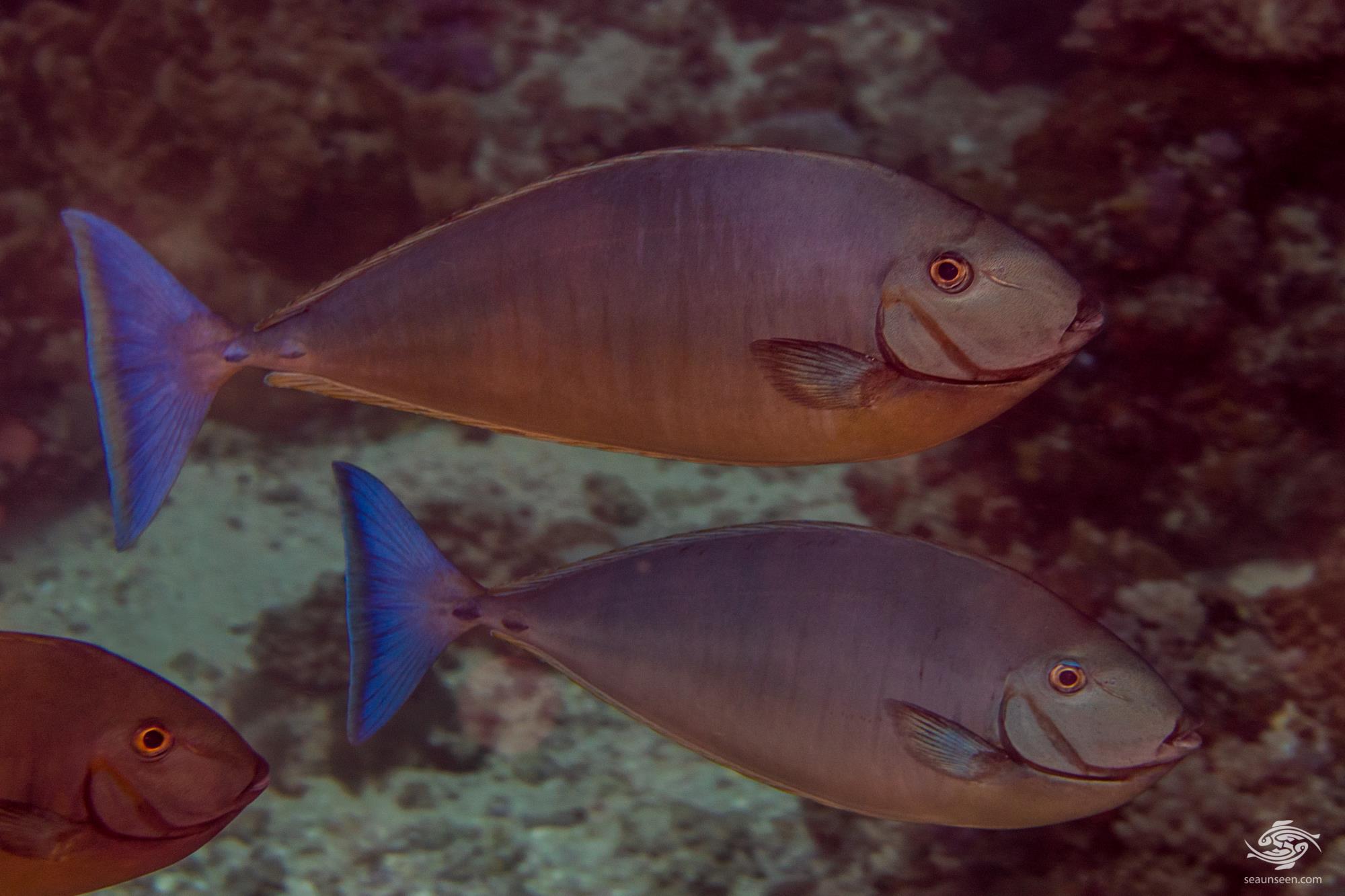 SLEEK UNICORNFISH IN THE WILD

The Sleek unicornfish is common in large shoals of several hundred fish in Tanzanian coastal waters.  They are most commonly seen in the 12 to 35 meter range in large shoals often of several hundred fish, but do go deeper and have been recorded at 229 meters. The shoals are active and always on the move. They are curious fish and will often come up to divers and will circle around them for a few minutes.  The shoals then leave but often return some twenty minutes later to circle around the divers again. 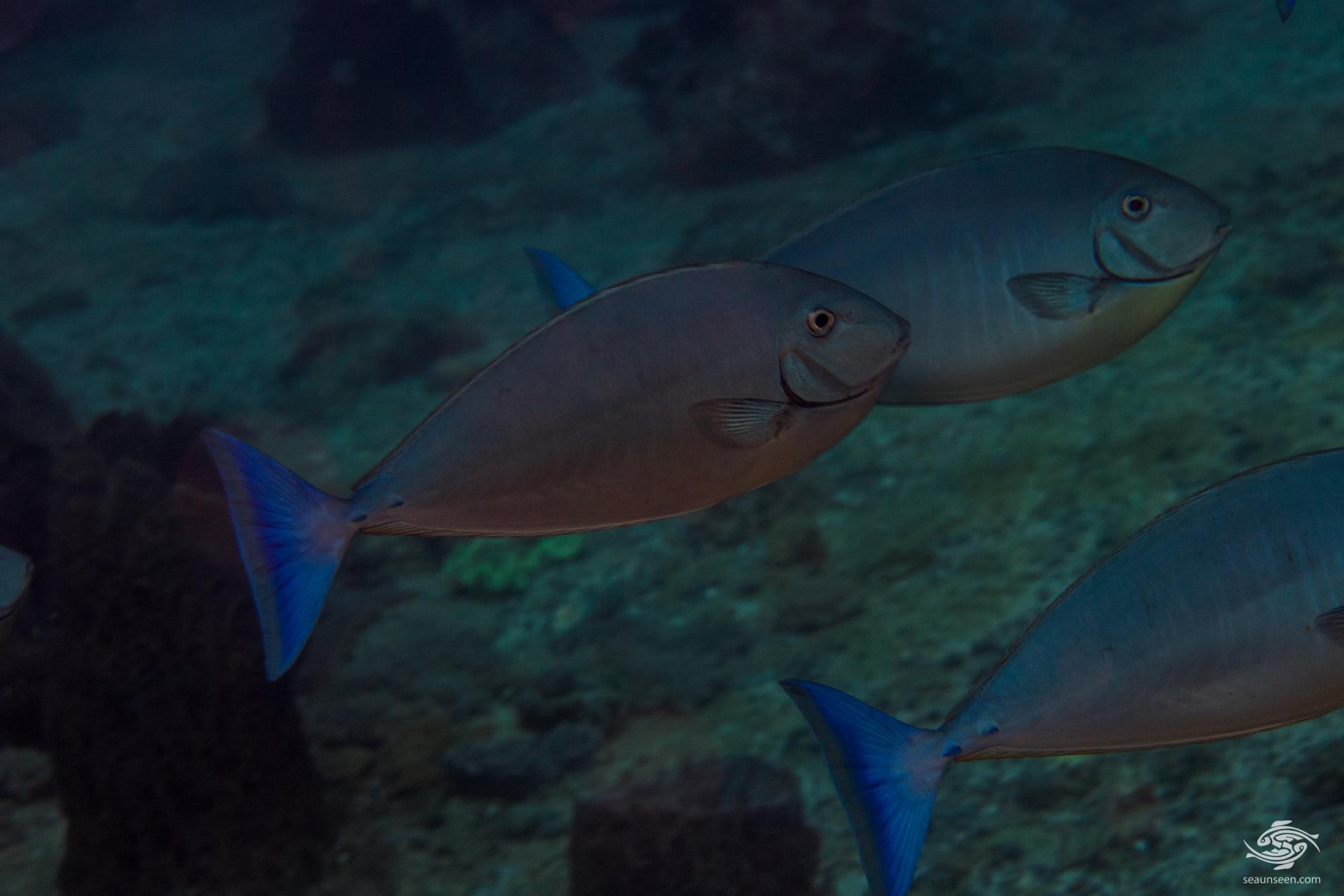 Sleek Unicornfish are found across the Indo Pacific area from East Africa across to Hawaii. The adults are most common close to deep drop offs. The juveniles are usually in shallower waters from 10 to 18 meters and hide on the reef in small groups. 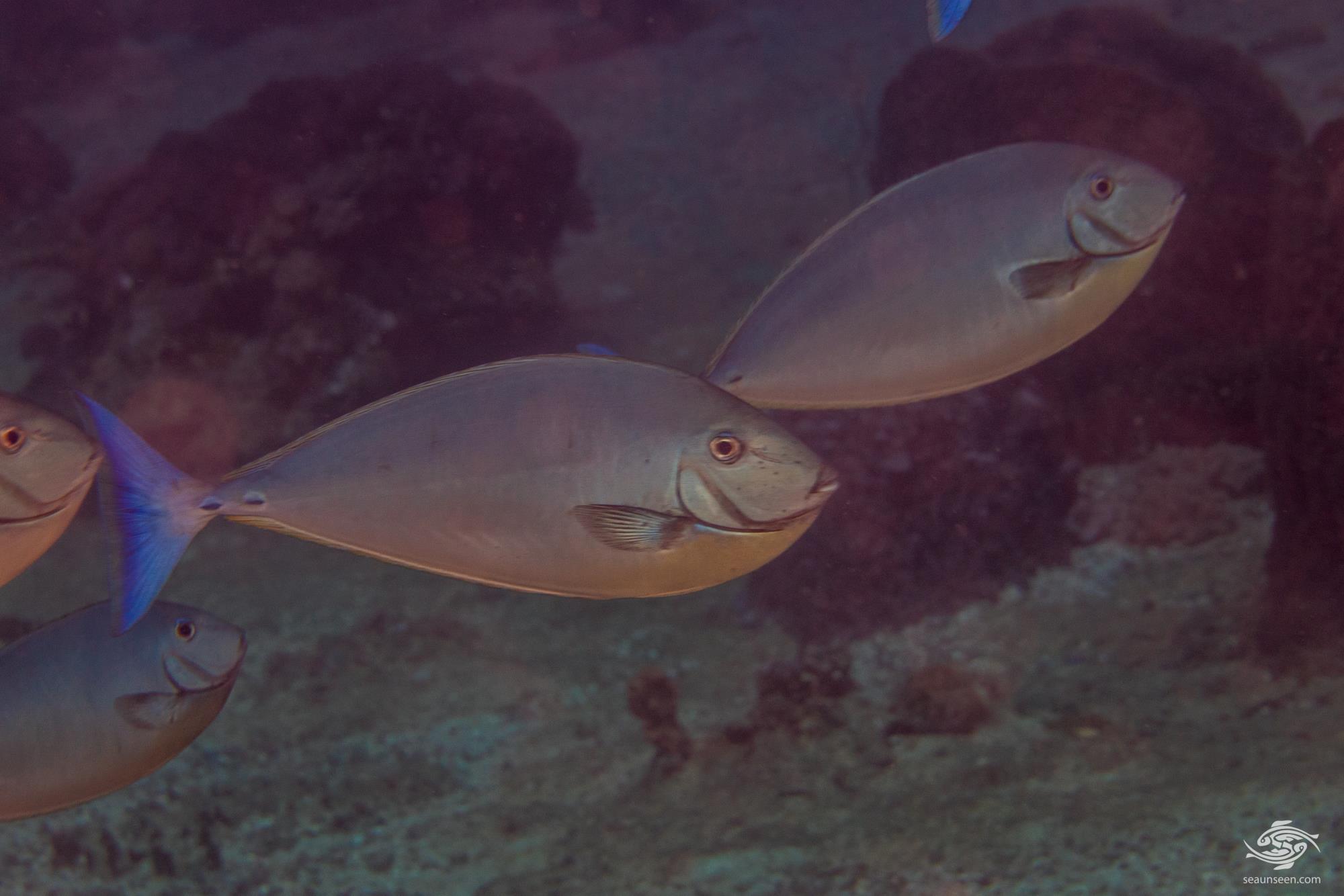 The juvenile Sleek Unicornfish are grazers and feed on benthic algae whereas the adults feed on plankton. They mainly prey on crab larvae, arrow worms and pelagic tunicates as well as jellyfish. 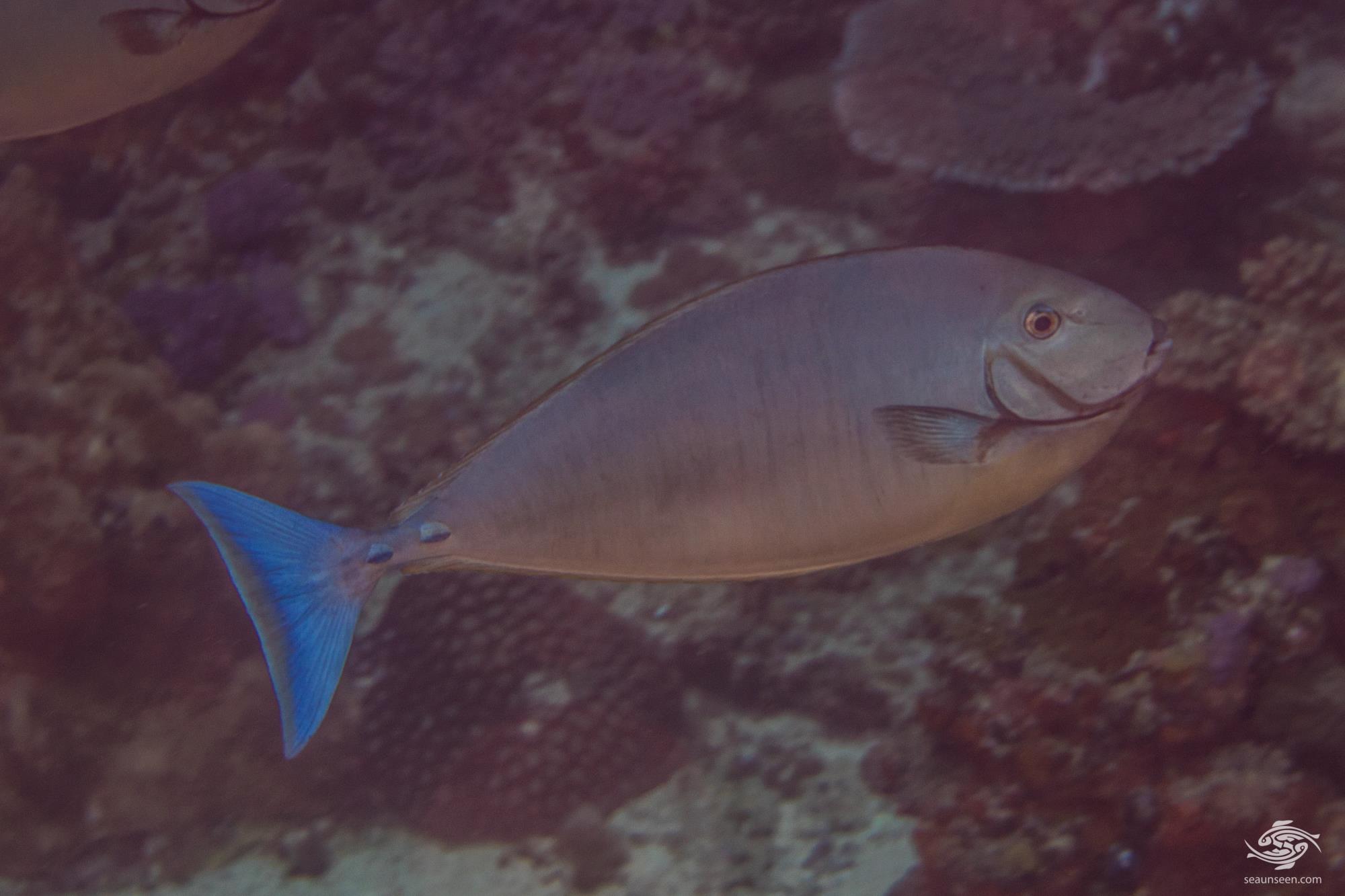 Group spawning takes place with the females releasing spawn into the water table and the dominant male fertilizing the eggs. Once the eggs hatch the larvae go through a planktonic stage. 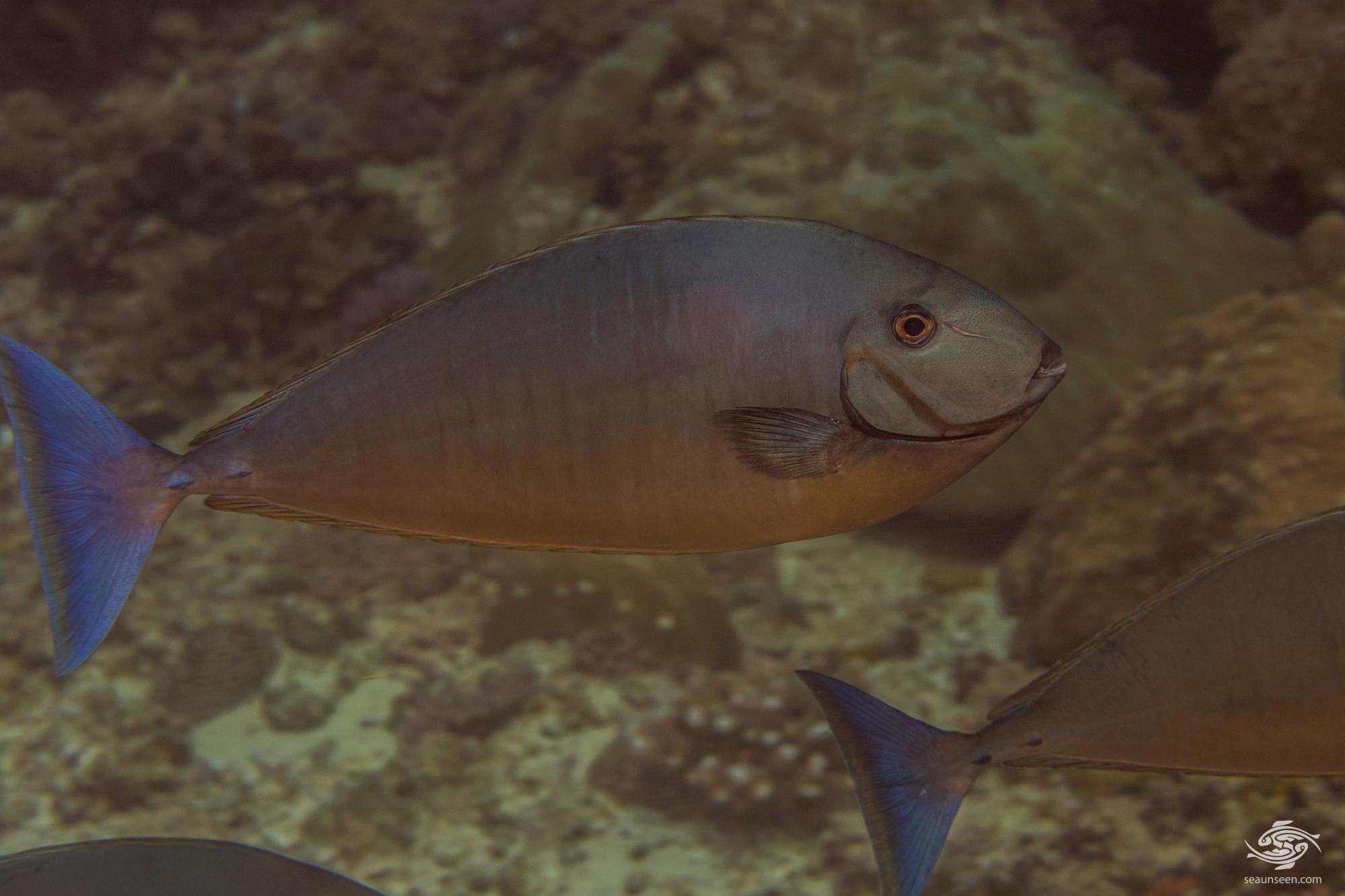 Sleek Unicornfish are not commonly kept in aquariums presumably mainly because of their size but are sometimes seen in public aquariums.