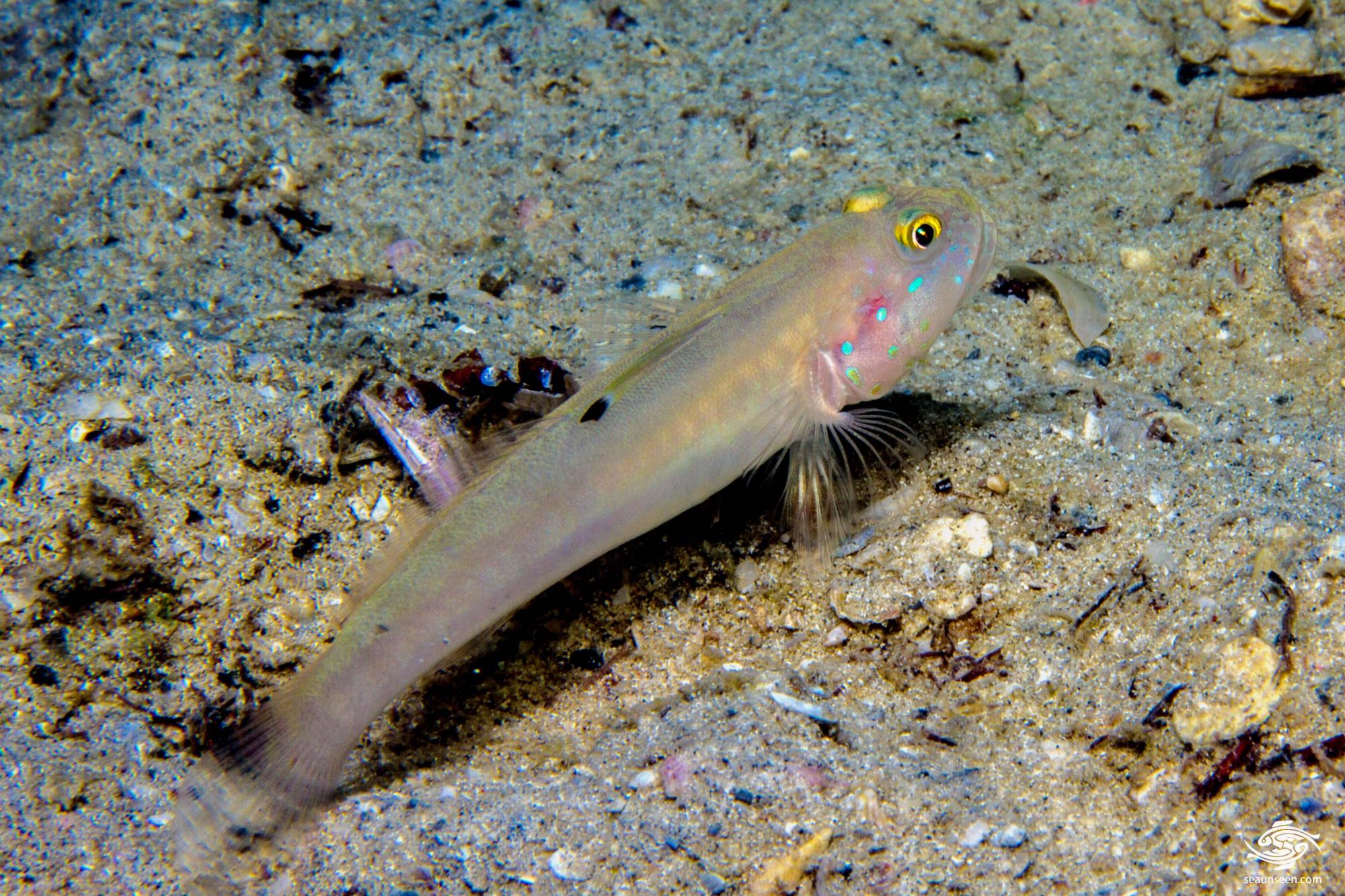 The Sleeper Blue Dot Goby (Valenciennea sexguttata) is also known as the Chalk Goby and the Sixspot Goby.

They lack swim bladders which given that they spend most of their time on the substrate are not needed and although they do not have a lateral line, they have sensory organs around the head. Valenciennea is differentiated from its other close goby cousins by having completely separated pelvic fins, a single row of teeth in the upper jaw and a fleshy flap located at the gill arch.

The Sleeper Blue Dot Goby has an elongated cylindrical body shape with two dorsal fins typical of the gobies, the body is a light blue-grey colour. All the fins are transparent and there is a black dot on the dorsal fin in the mid body. On the cheek area there are a number of light blue dots and the eyes are ringed in yellow.  They grow up to 14 cm in length. 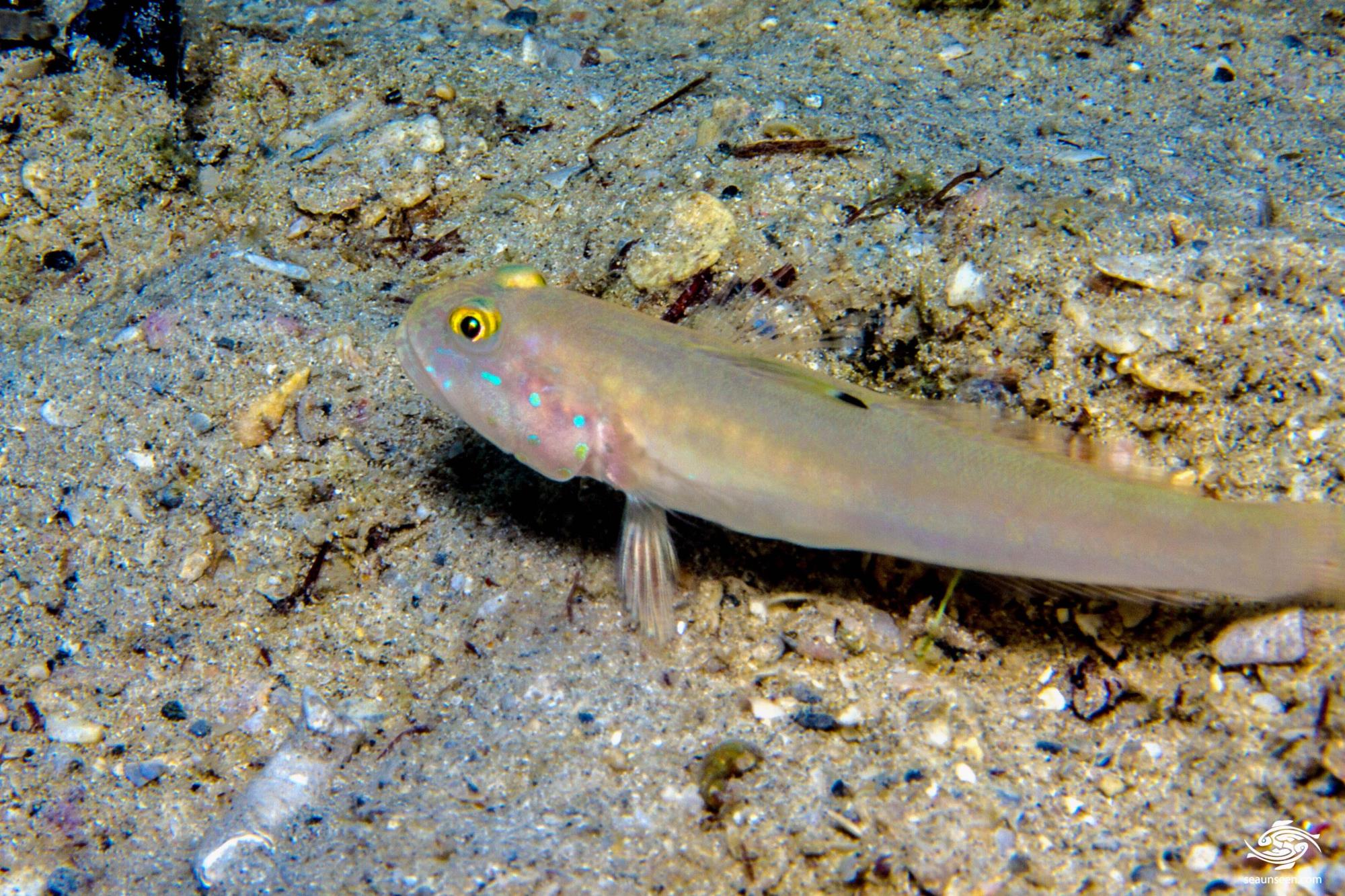 The Sleeper Blue Dot Goby is fairly common in Tanzanian coastal waters. They are usually seen sitting on the sand in mixed rubble and sandy areas alongside or in between the reef.

When they feel threatened they swim off a few inches above  the sand.  Their bulbous eyes allow them to look backwards to monitor any threat. They will usually swim into a burrow and hide when threatened. 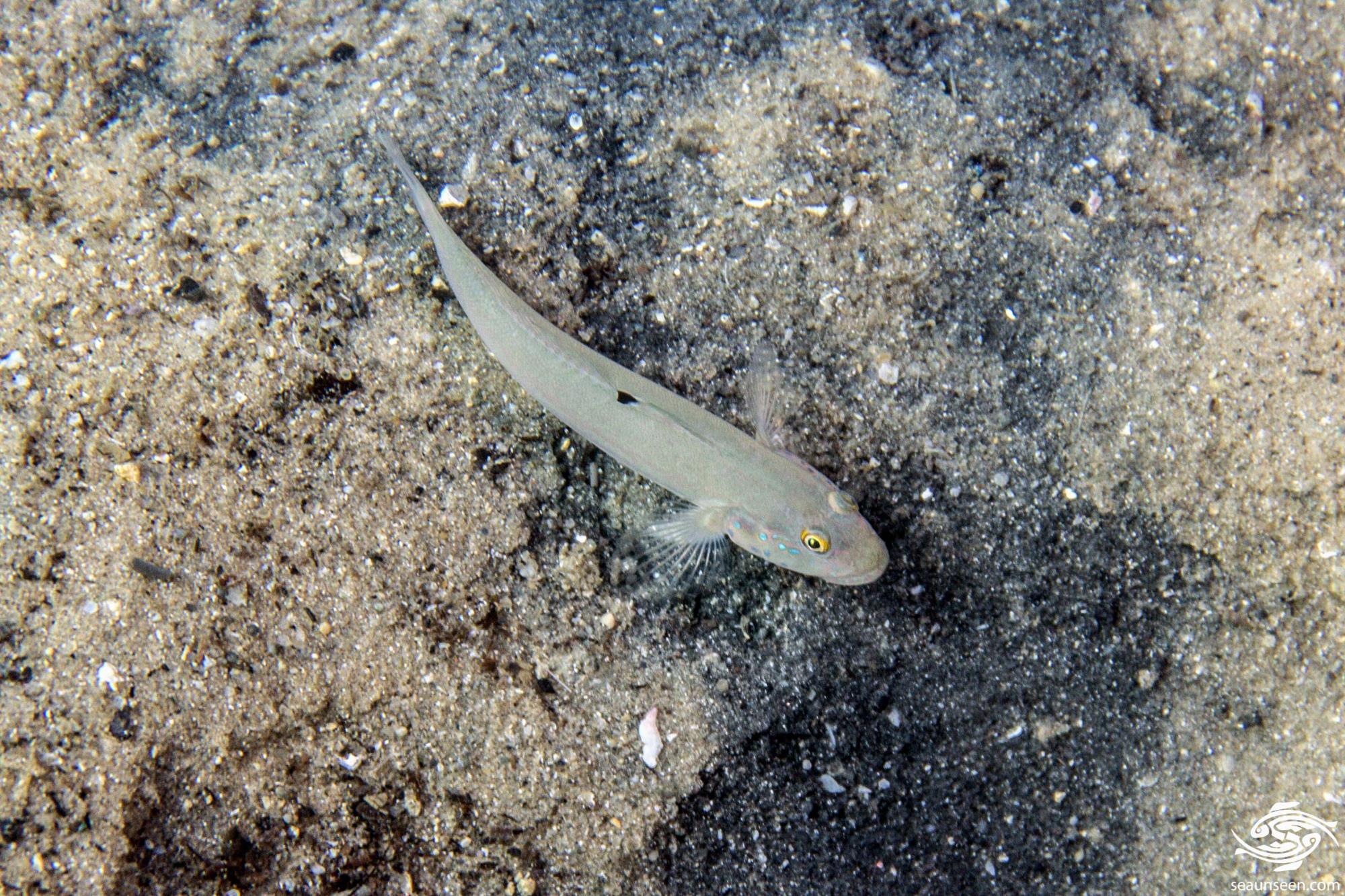 The Sleeper Blue Dot Goby is found across the Indo west Pacific area from East Africa to southern Japan and south to the Great Barrier Reef. They are mainly seen on the rubble and sandy areas between corals and  generally swim low close to the bottom. They are more common between 5 to 15 meters in depth but we have seen them down to close to 20 meters in Tanzanian waters. 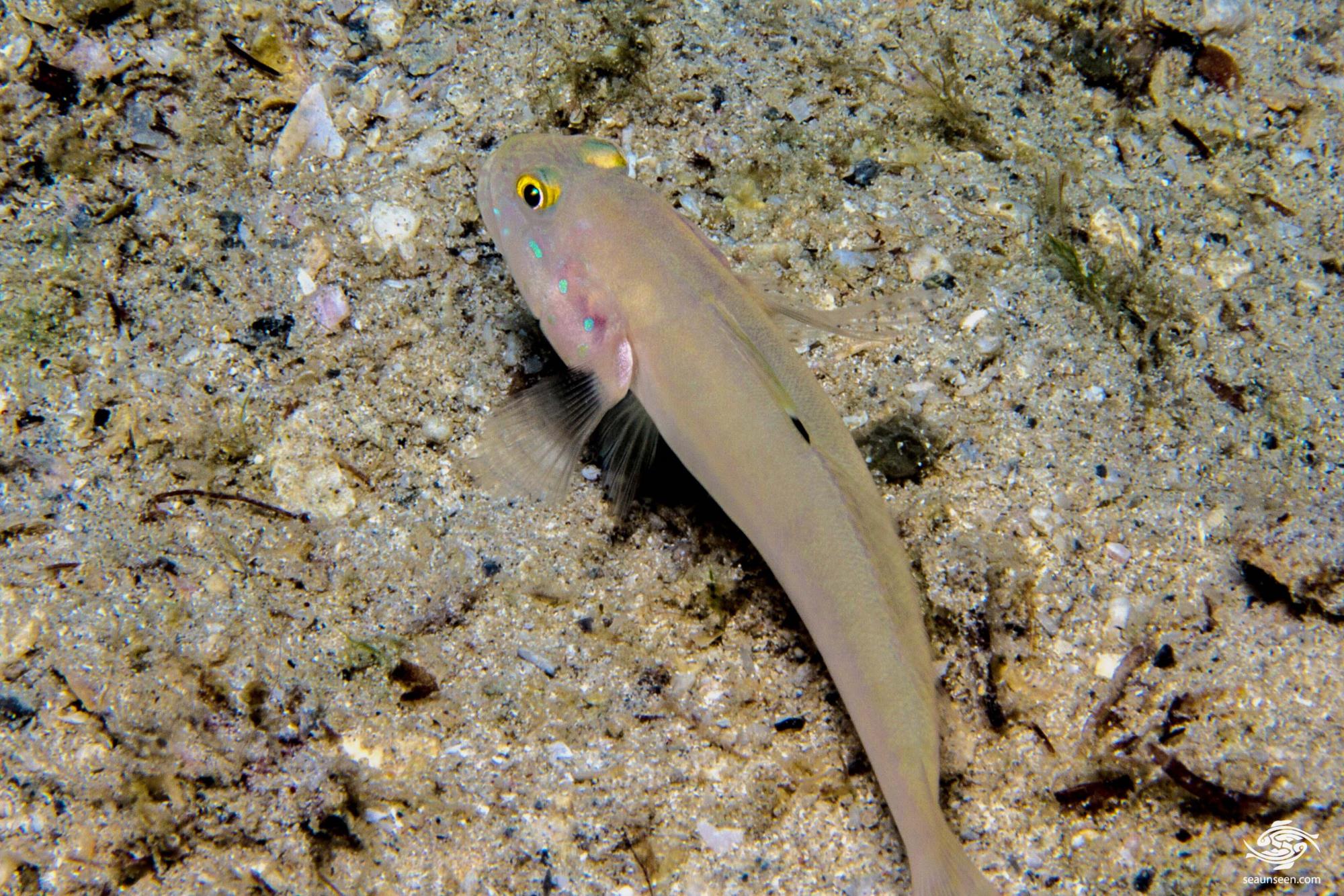 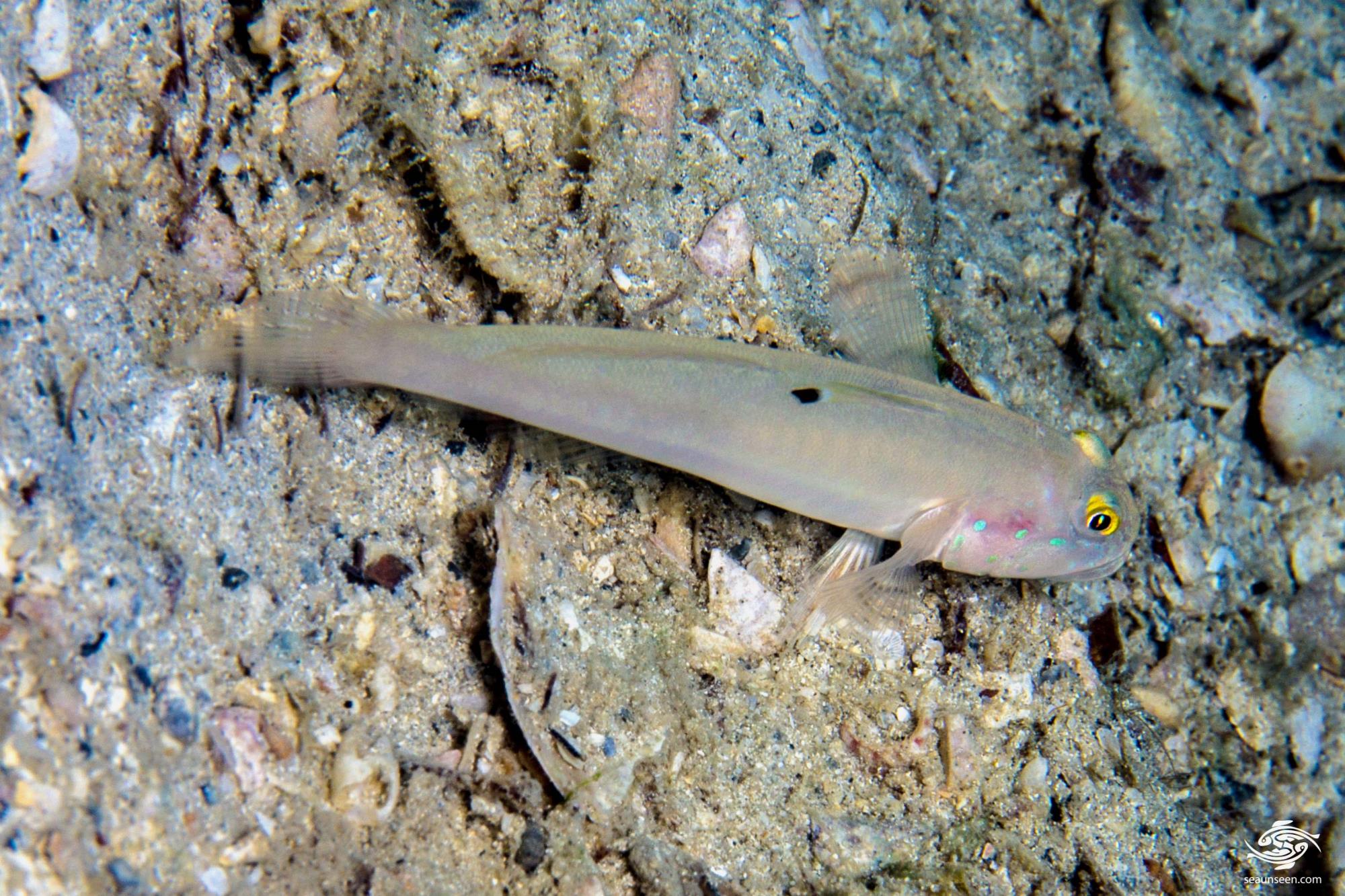 There is an interesting piece of research done on this genus’s breeding habits here.   Essentially males mate with the largest female that is available and will transfer from a smaller female to a larger if one is available. Females guard larger males and benefit from having a larger male who provides larger and more burrows which provide more shelter. 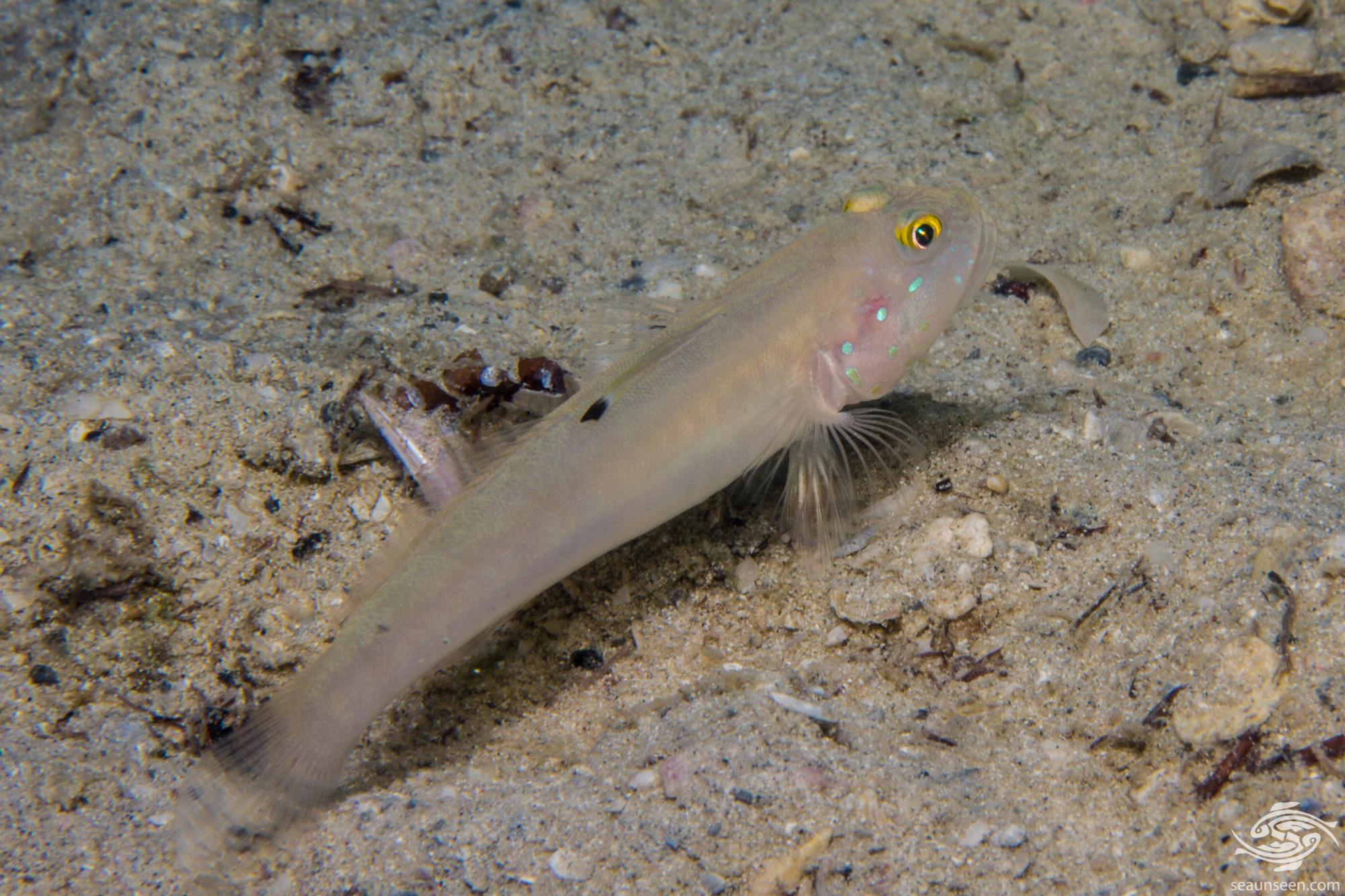 Sleeper Blue Dot Goby can make an interesting and useful contribution to a tank by filtering the sand if this is required in an aquarium.  They are not the most colorful of the genus and perhaps because of this are not that popular. Their personality varies from specimen to specimen and provided that they are in a sufficiently large tank with deep fine sand and good water conditions and no other aggressive species they are likely to be quite active in the open. All of this genus seem to live longer and be happier if kept in pairs.

They tend to be easy to feed and are considered reef safe but may dump sand on invertebrates on the lower parts of the tanks. Because of their bottom feeding habits they may have parasites and it is a good idea to deworm them.

Unless one has a very large aquarium only one pair should be kept. They may become territorial with other similar feeders who potentially threaten their food supply. You can read a very good article here on keeping these fish.