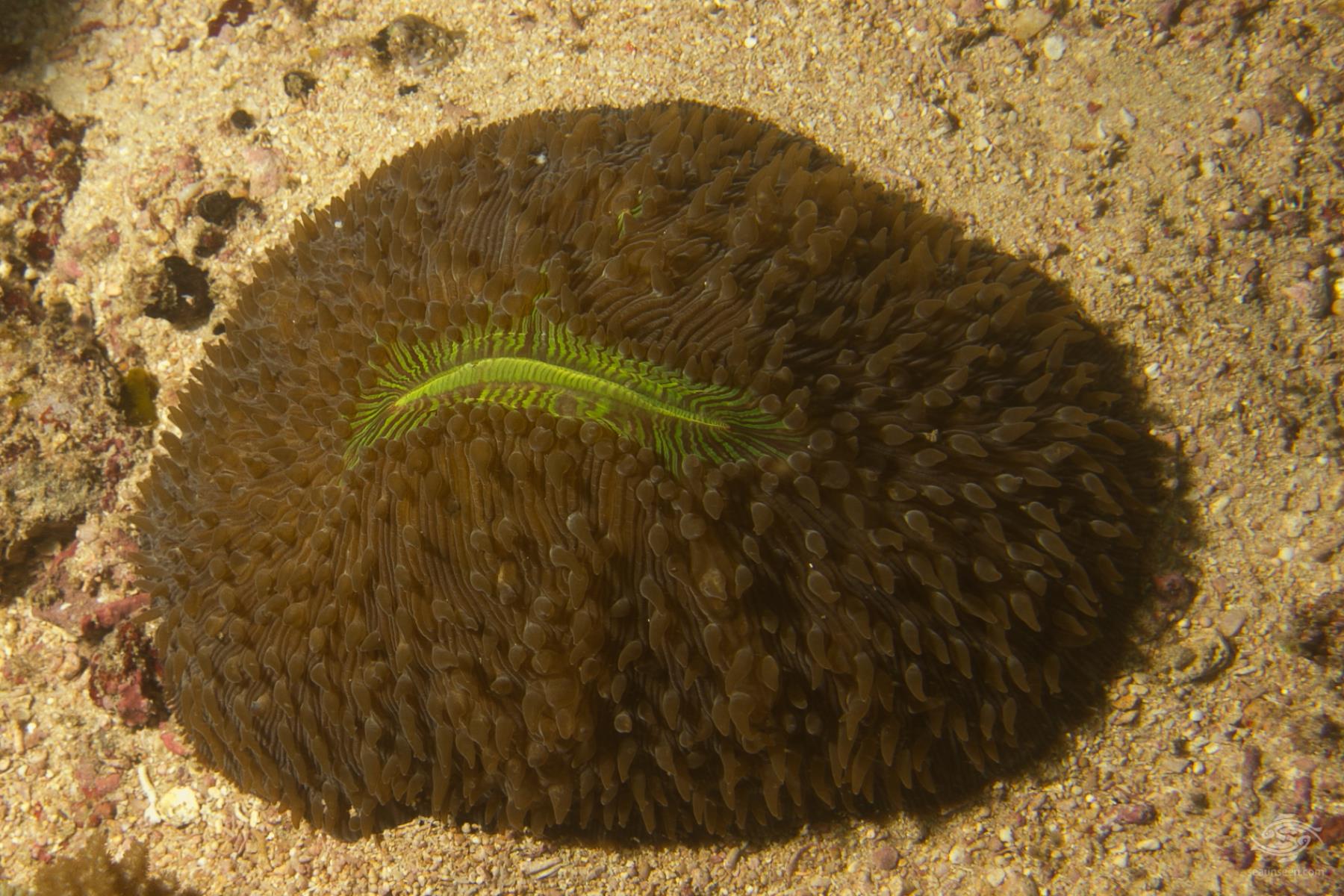 Most corals are stable in the sense that they are firmly attached to the reef and are immobile whereas slipper coral is only attached to the reef in its infancy. In their infancy they are called acanthocauli and are attached to a substrate. The disc shape, combined with the stalk that attaches to the substrate,  gives them their name of mushroom corals. As the coral grows, so the stalk breaks off and the adult moves on. Two corals may be seen in the acanthocauli stage below and the stalk is below the upper section. 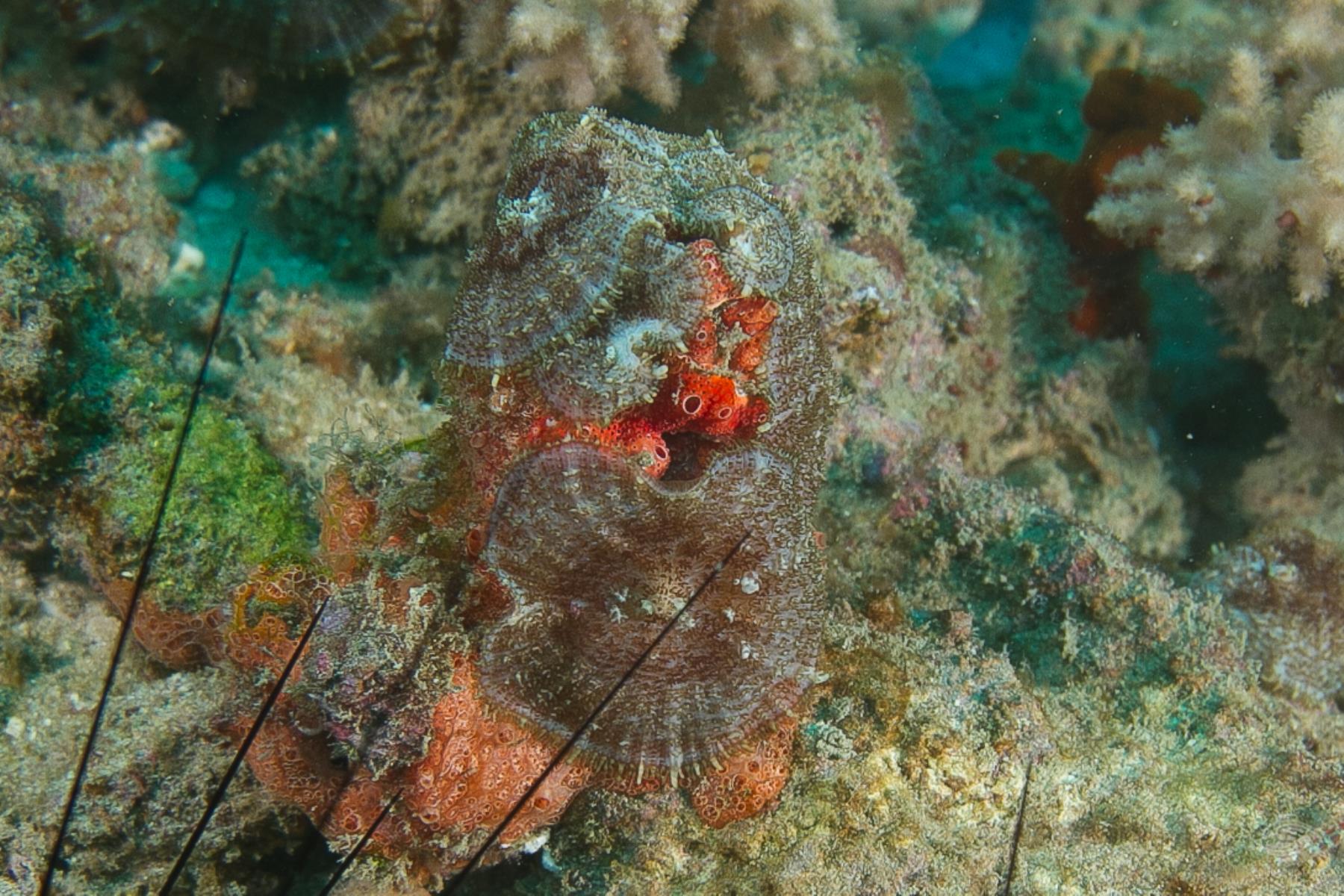 Slipper coral are important in reef development as they move down the reef onto more inhospitable sections. When they die they provide a substrate for less sensitive corals to adhere to and thus provide a base for the expansion of the reef. Here is a video where you can see the tentacles in action:

When alongside other corals they secrete a mucus which prevents them from being over grown by the other corals. The secretions can inflict heavy damage on other corals that encroach on them. As they are moved by wave action they are often found in holes on the reef and in areas where they have been washed by the waves. 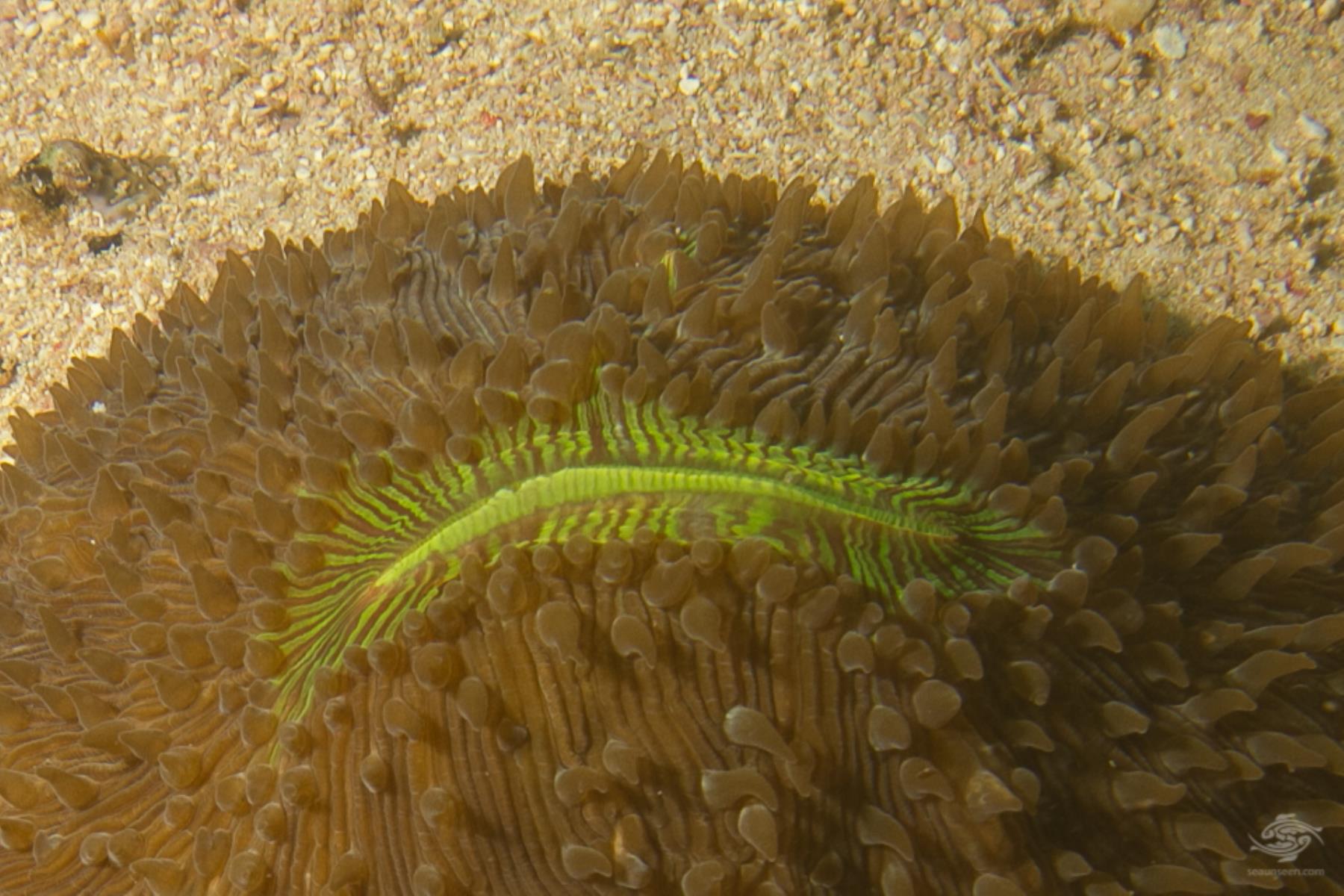 Slipper corals have an elongated shape, growing up to 45 cm  long and have a raised center with a slit like mouth in the upper center. They have raised ribs extending outwards from the mouth. Between the ribs are  short, tapered and widely spaced tentacles. When fully extended, only a carpet of tentacles is visible. They have many mouths called polystomatous across their surface. The larger mouth is aligned with the central axis or furrow and is the green section that can be seen in the images. 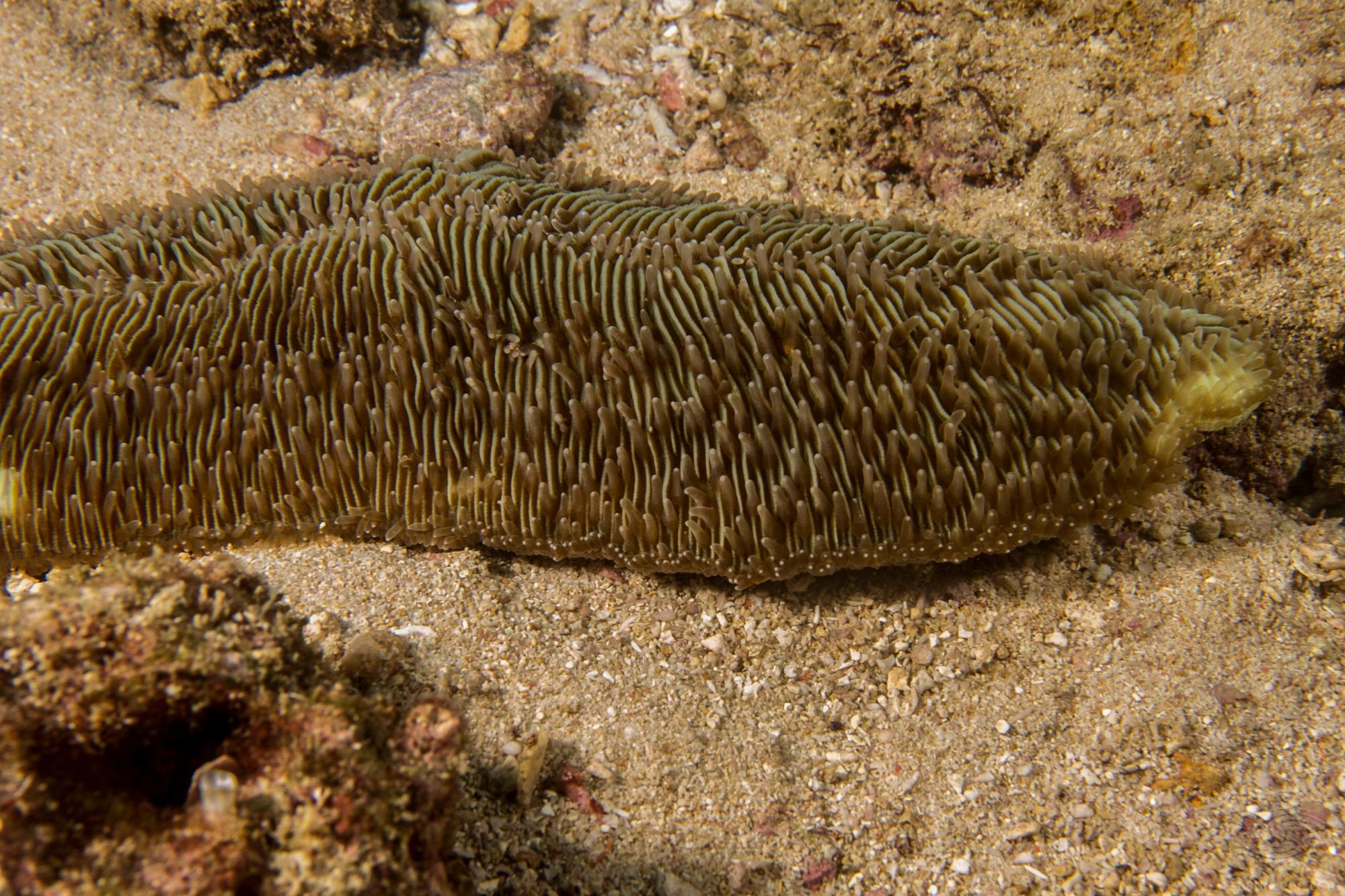 Slipper coral is a hermaphrodite and can reproduce both by sexual reproduction and asexually. During sexual reproduction eggs and sperms are released into the water through the mouth. These then mix and fertilize in the water. Once fertilized the egg the drops onto the substrate. From there the polyp develops  growing its calcareous skeleton. Asexually the slipper coral can reproduce from damaged adult tissue, the result are young  acanthocauli. 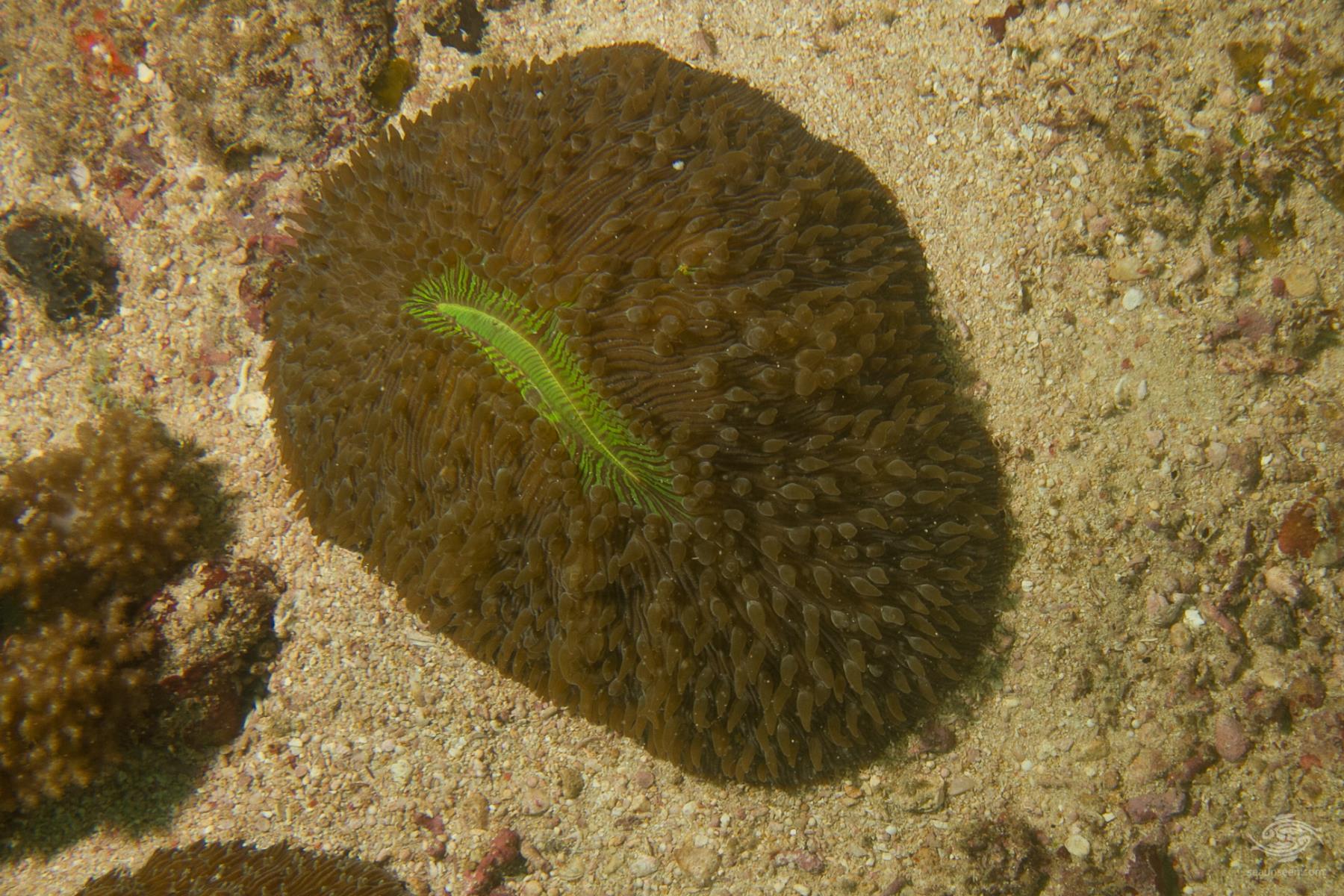 Slipper corals are able to withstand harsh conditions and inhabit areas that other corals cannot. They can cope with being immersed in sediment for quite some time. Even immersion in fresh water for short periods does not kill them. They are found across the Indo Pacific area. Here is a video of a mushroom coral excavating itself from sediment:

Slipper corals are listed on Appendix II of the Convention on International Trade in Endangered Species (CITES), indicating that trade in this species should be carefully regulated. Because they are easily collected they will likely remain under threat, particularly in third world environments where they are harvested for building purposes.

These corals are propagated in captivity relieving stress from collections for aquariums. 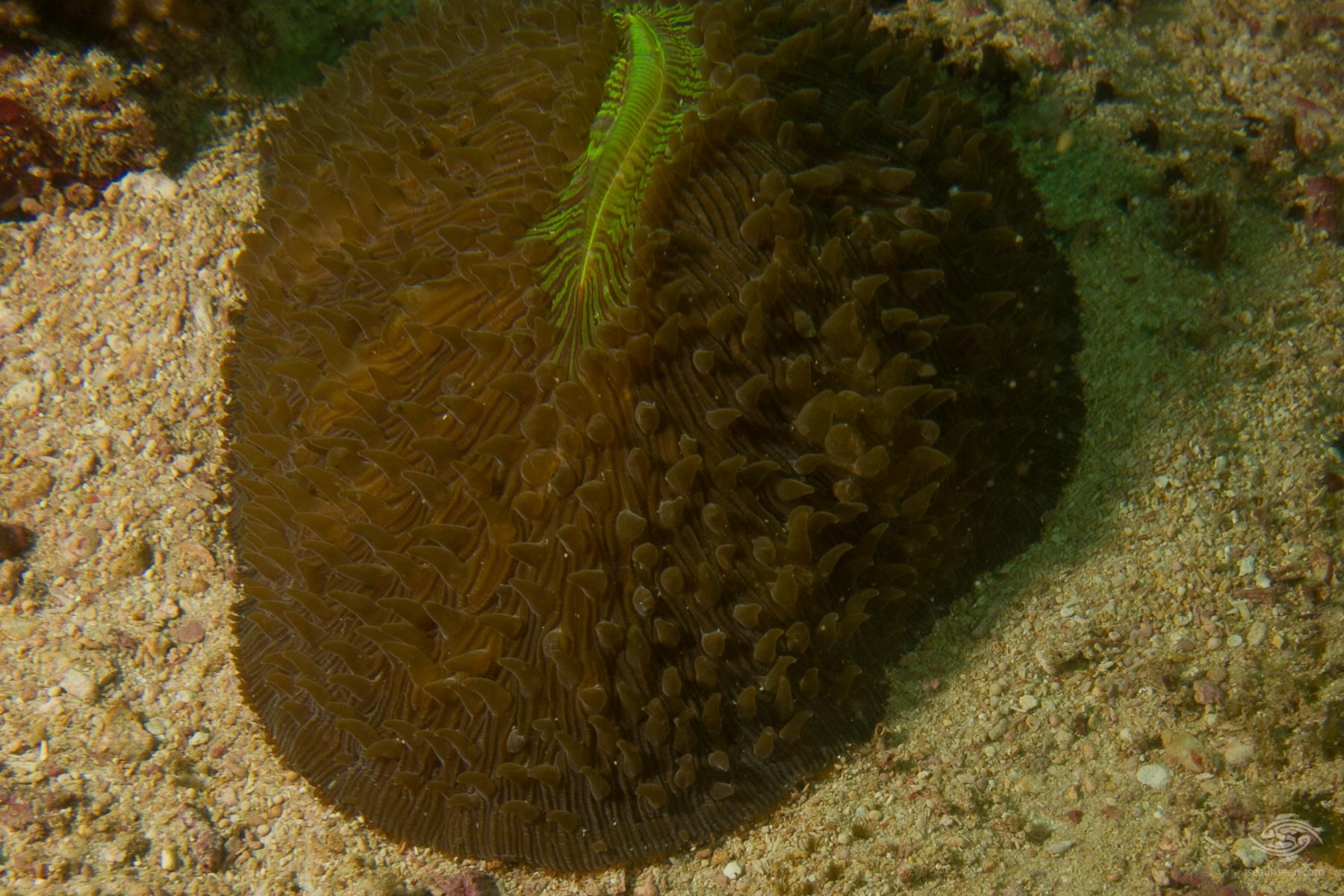