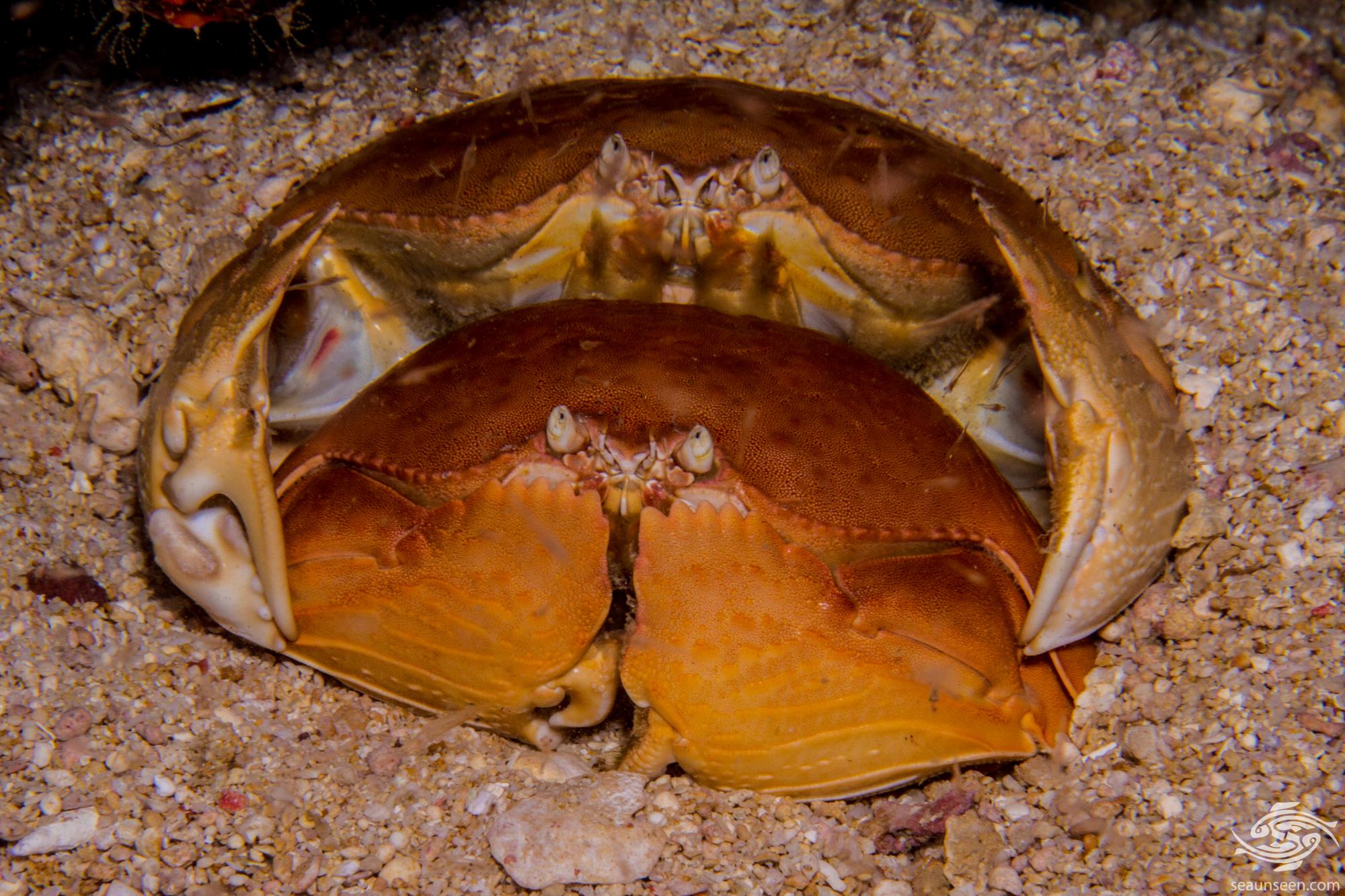 The Smooth Box Crab (Calappa calappa) is also known as the Giant Box Crab or the Shamefaced Crab. Because of their variable colouration they are sometimes also called the Red Spotted Box Crab.

They are not often seen due to their nocturnal habits and the fact that the are adept at burrowing into the sand.  Box crabs obtain their name from their large unusually shaped claws which they pull into the body, creating a box. Because of this habit of pulling the claws in they are sometimes also called Shame Faced Crabs.

Smooth Box Crab have a rounded body shape with extensions on the side that extend out from the body. These can be clearly seen in the image below.  These extensions curve downwards and cover the walking legs. The claws once pulled in are capable of covering the entire front of the body including the eyes.  This provides protection against predators and allows them to protect their eyes once buried in the sand. Fine hairs on the edge of the claws prevent sand from entering the enclosed area.

The rear of the body is sloped downwards and the crab uses this slope to push its self downwards and backwards into the sand which they can do in a remarkably quick fashion. The eyes and respiratory organs are set high up on the head and this allows the crab to hide in the sand.

The claws although equal in size, have evolved into two different shapes. The right hand claw has a large hook and is used for crushing mollusks. The left hand claw which can be seen further below in detail is more delicate and is used to pick the pieces out of the crushed shell.

The colouration of the Smooth Box Crab is variable, usually they are a light yellow brown colour but some are slightly darker with red-brown dots on them. This can be seen on the two specimens in the image below.

They grow to a maximum width of 15 to 18 cm. The larger crab ( male) in the images is roughly in this size range. 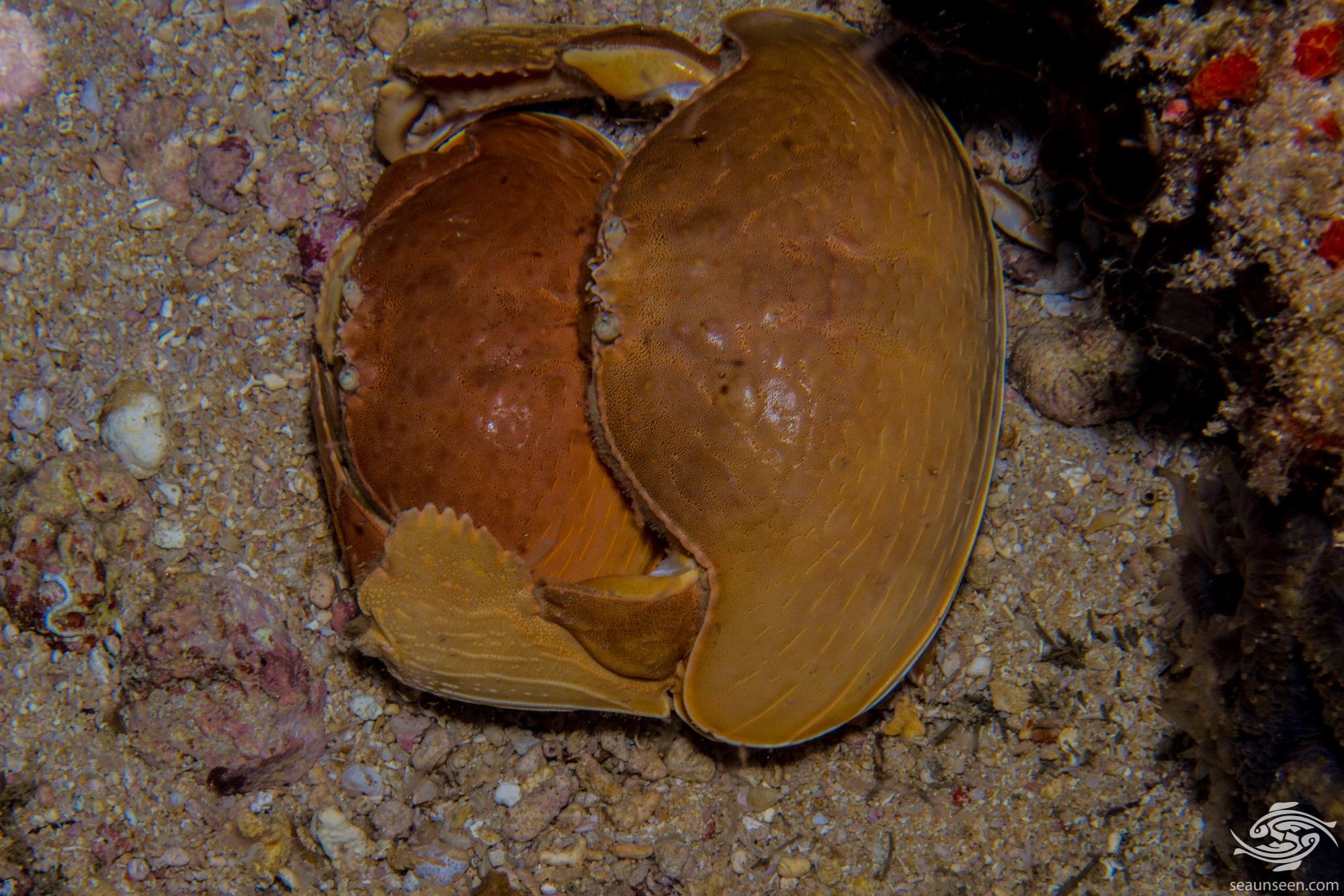 SMOOTH BOX CRAB IN THE WILD

In Tanzania the Smooth Box Crab are usually only seen on night dives on the top of reef flats at around 10 meters in depth. We have not seen them in the intertidal zone  but given their ability to quickly dig into the sand this does not mean that they are not there. They are far quicker than their appearance might lead one to believe.  On one night dive we witnessed one that performed a series of very fast hops to get its self into a hiding spot. 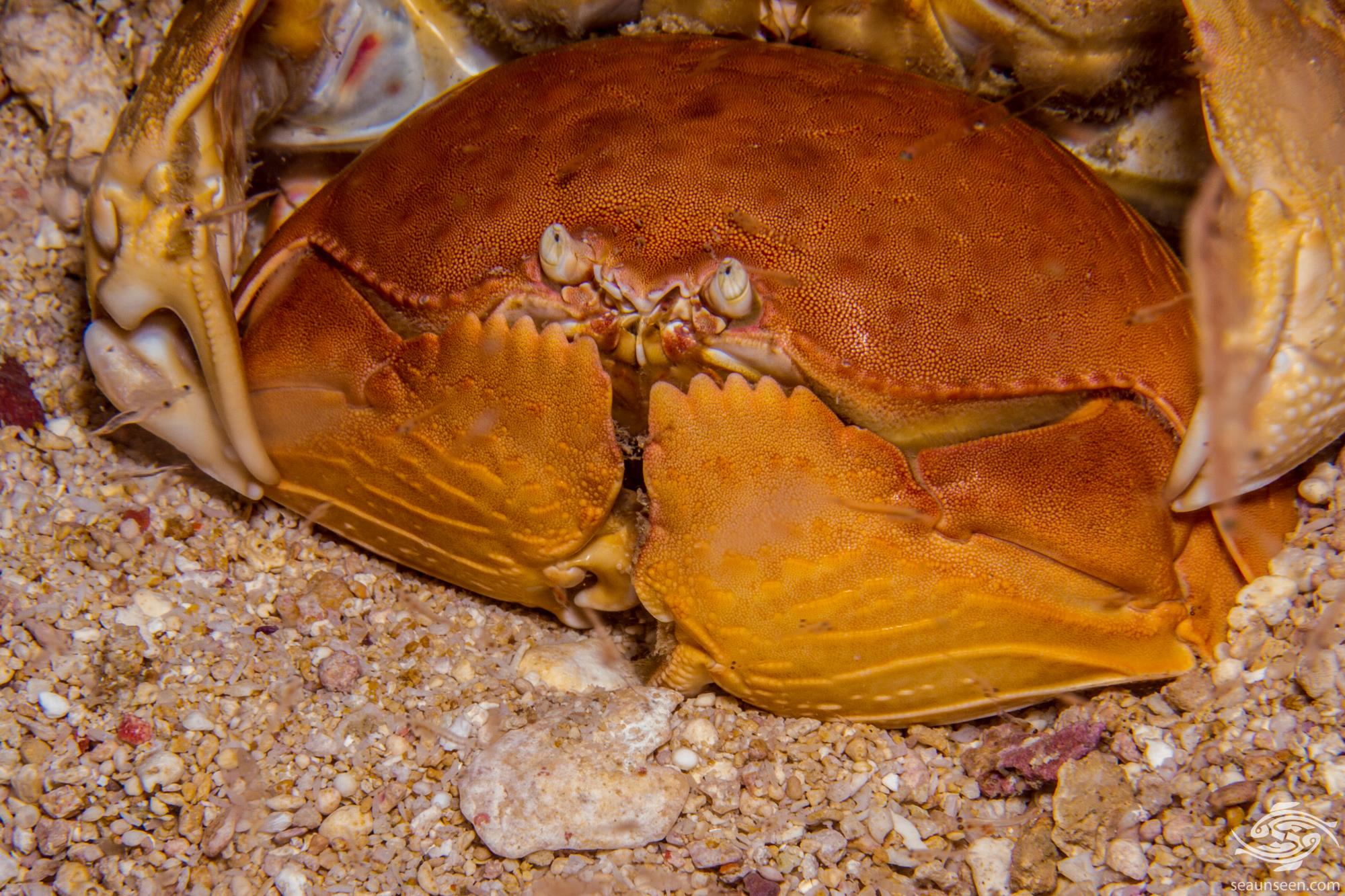 Smooth Box Crab are found across the Indo West Pacific area from the East Coast of Africa across to Hawaii, north to Southern Japan and south to Australia. They are found from the intertidal zone down to 50 meters. 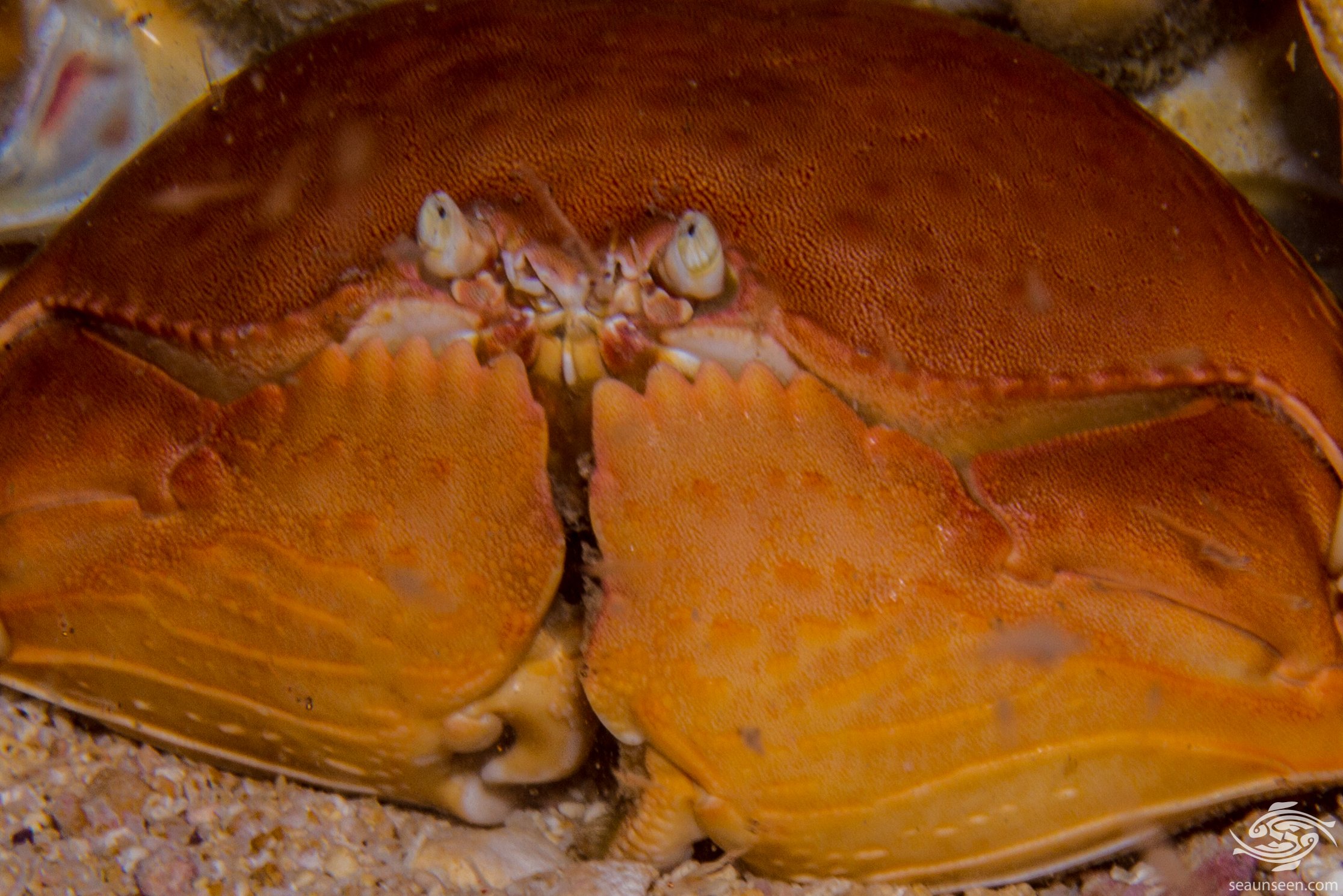 The claws of the Smooth Box Crab have evolved a peculiar shape which is suited to opening mollusks, in particular clams on which they predate.  The right claw with its larger hook is used to break shells up and the unusually shaped left claw pictured below is used to remove the meat. They also use their powerful claws to prey on hermit crabs. 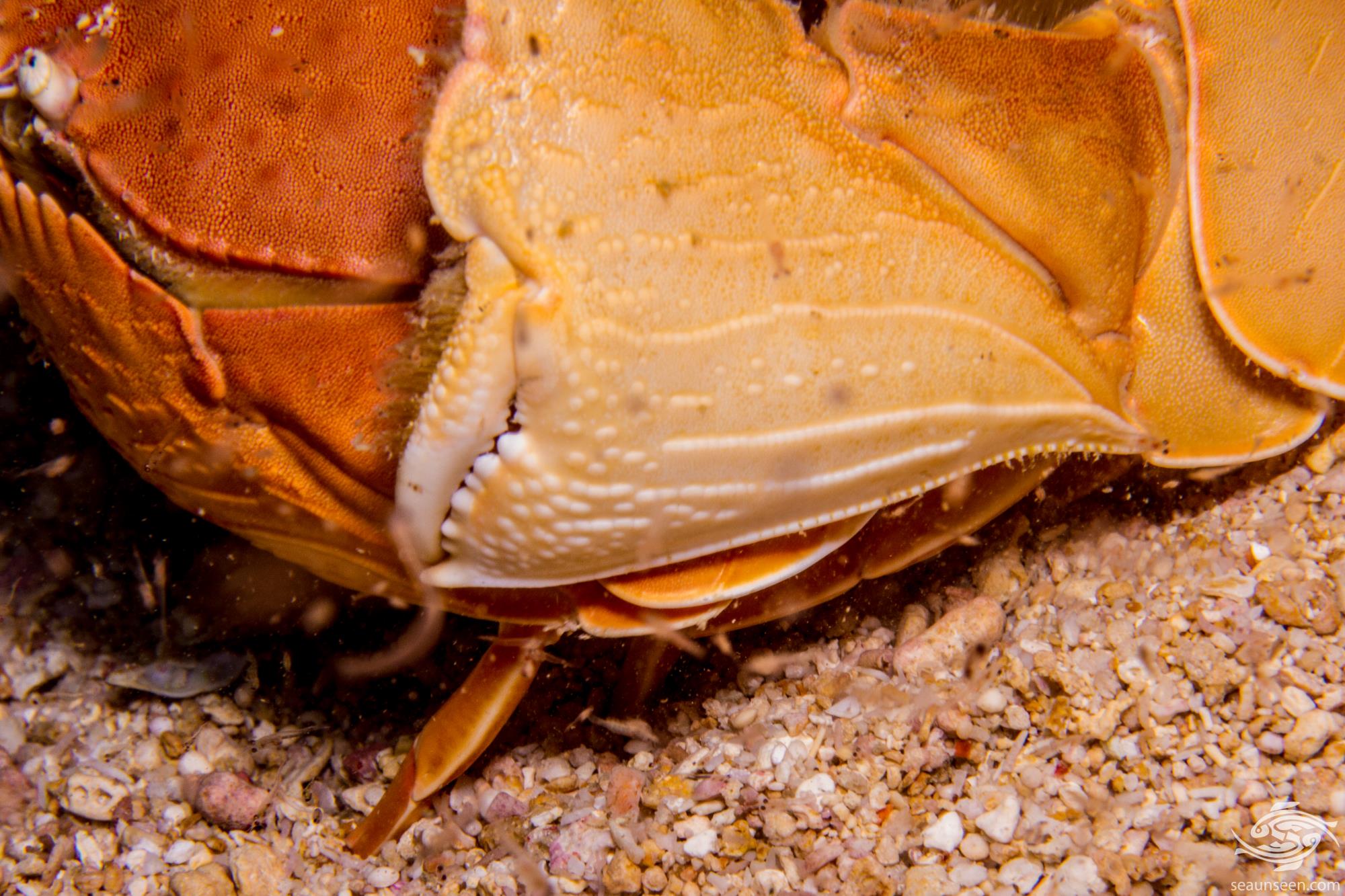 As can be seen in the images, the male which is usually larger approaches the female from behind and envelops her with his claws. Mating appears to be a prolonged process and the eggs on the female are fertilised by the males and then stored under the telford of the female until hatching.

Once they hatch the larvae go through a planktonic stage before settling down and growing into their adult form. 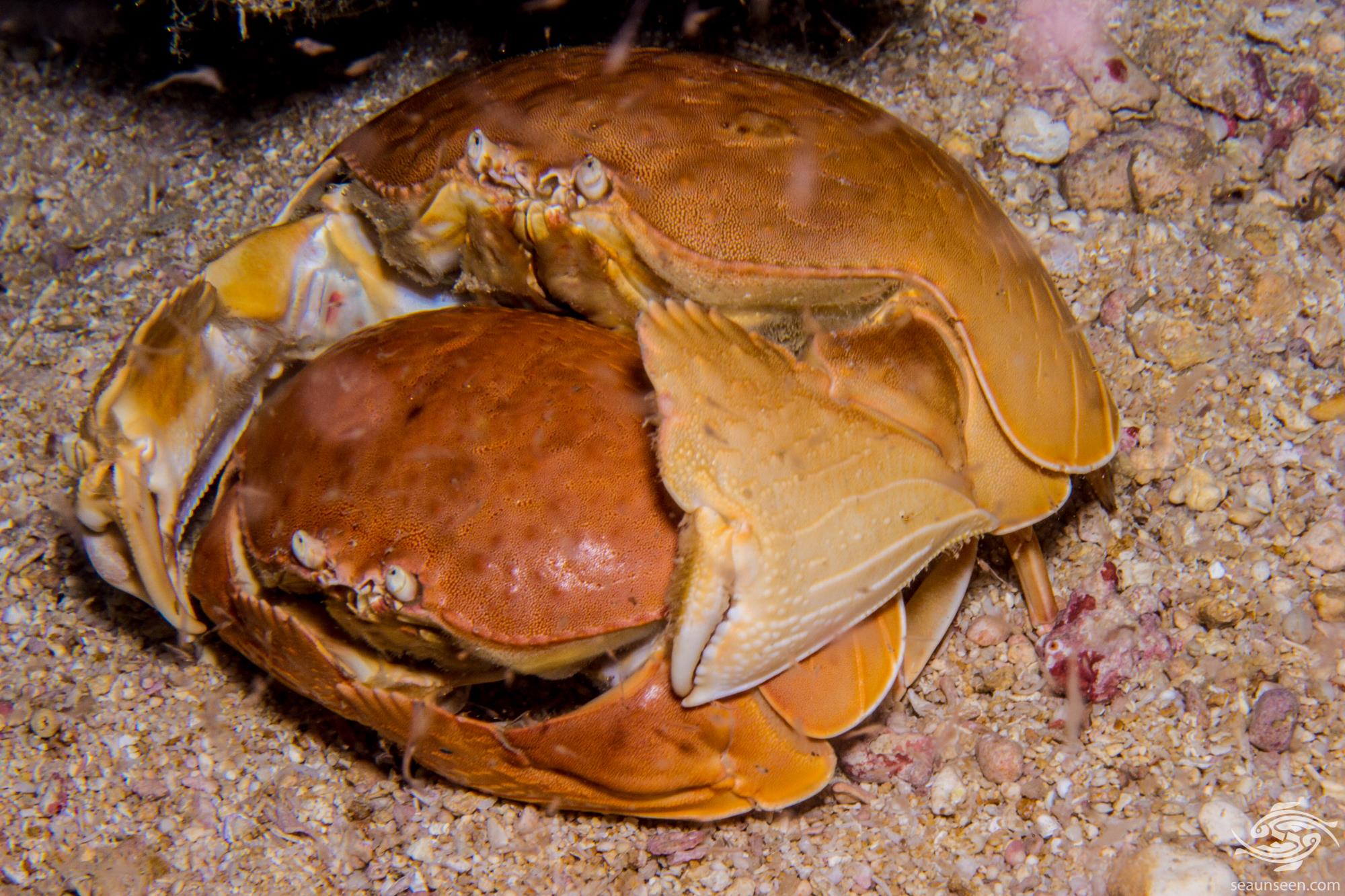 Smooth Box Crab is exploited commercially throughout its range and the meat in the claws is said to be very tasty. As a word of warning however, in a study conducted in the Philippines marginal levels of toxicity were discovered.  A further study investigated the potential of the hemolymph produced by the crabs against human cancer. This was done in a laboratory and the hemolymph was found to be remarkable effective in the laboratory. 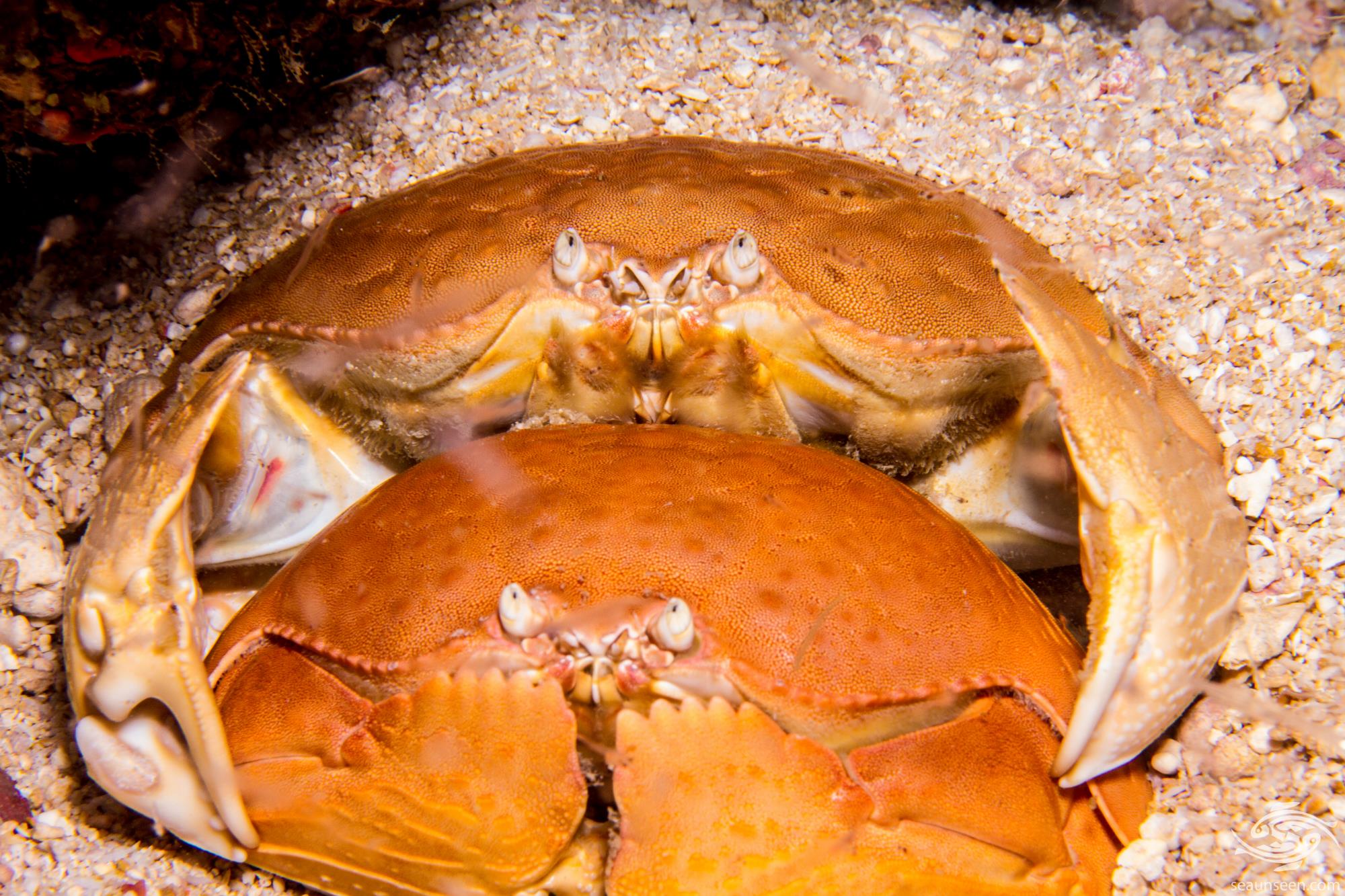