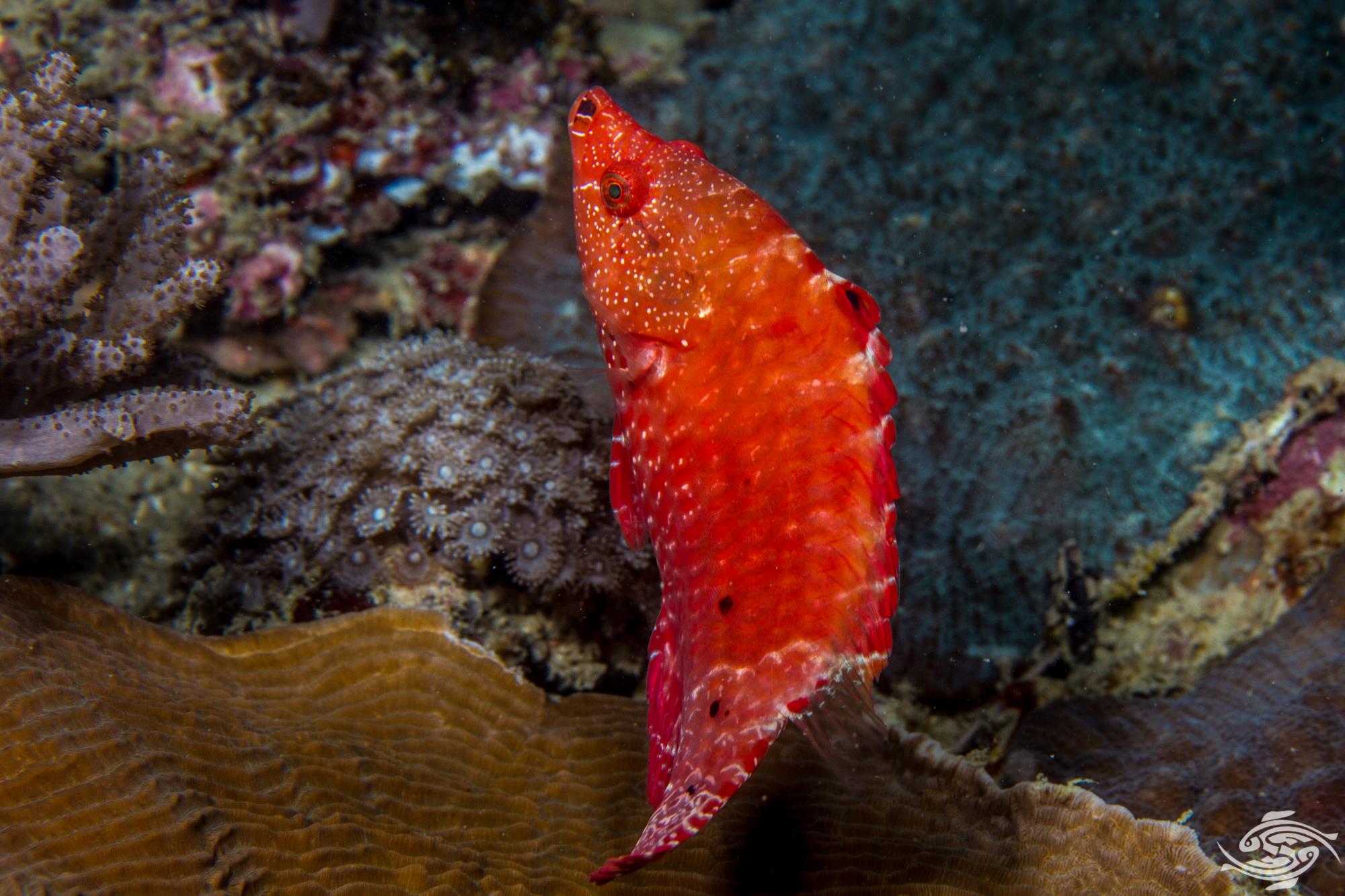 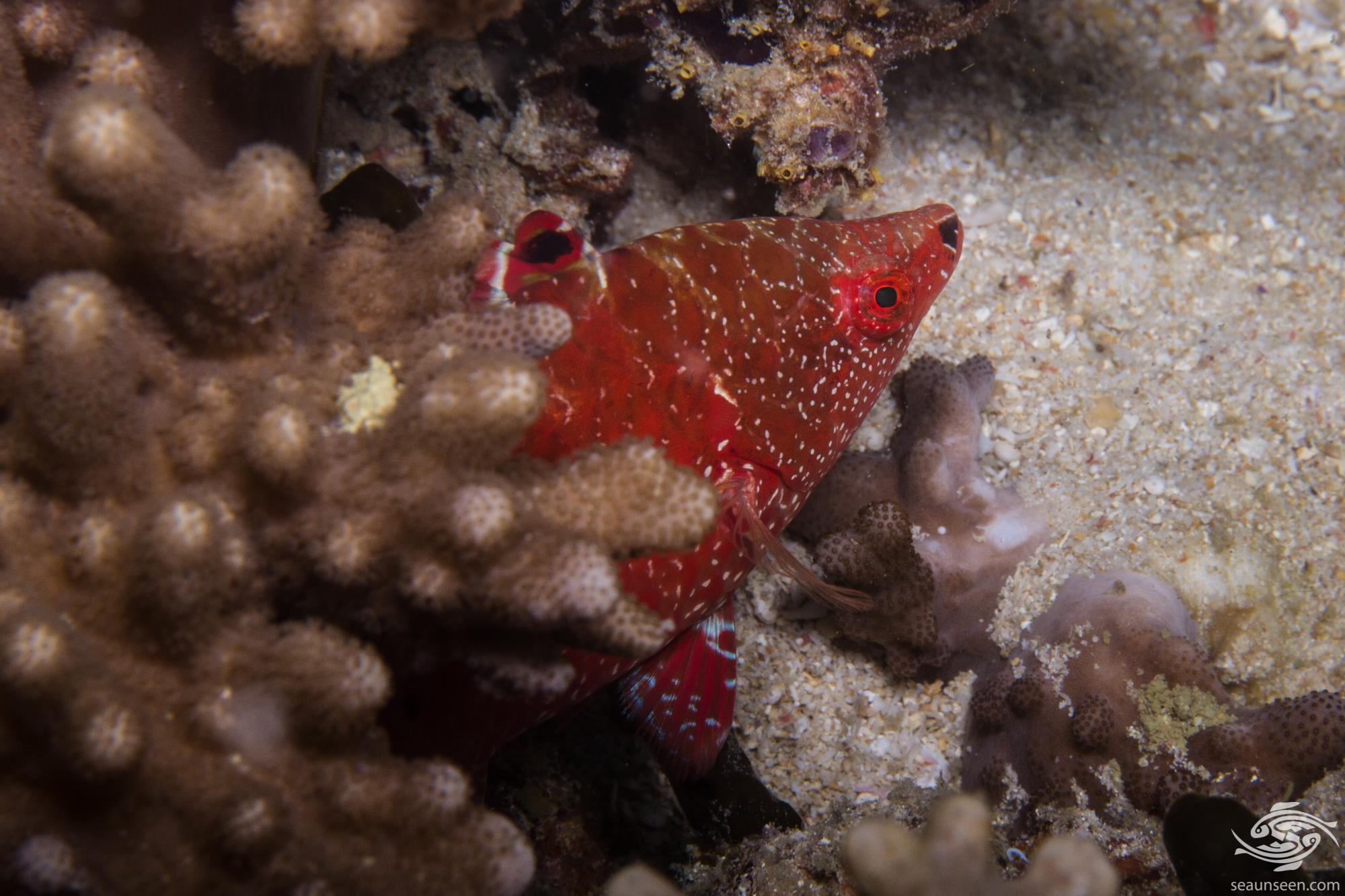 In Tanzanian waters there is considerable variation in coloration between the adults. However because of their upturned nose they are quite distinctive. The Snooty wrasse is usually a reddish colour but there are brown and brown and white variations. The adult specimen pictured below had a large amount of yellow on it which is unusual. 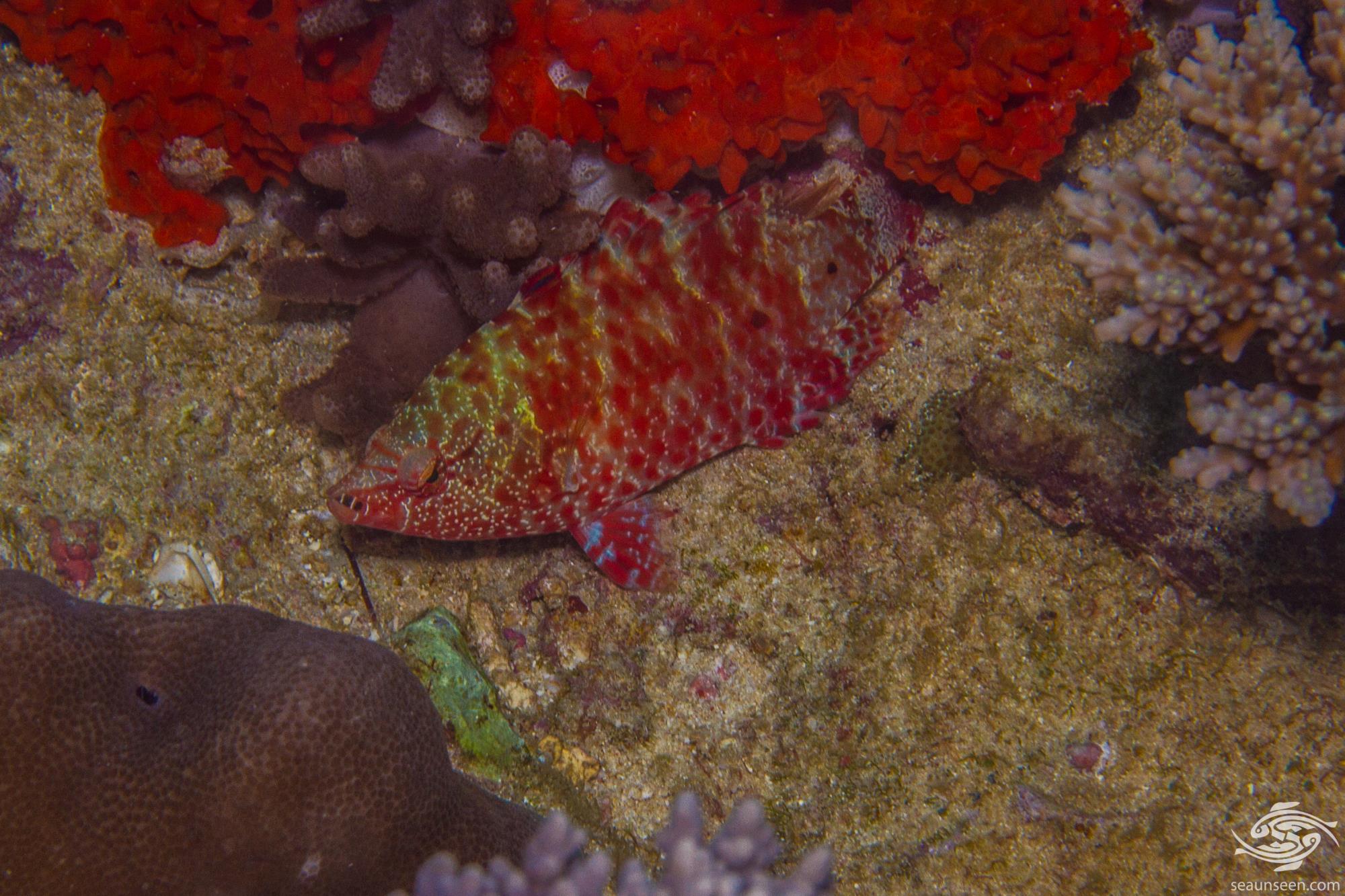 Some people seem to confuse them with the Floral Wrasse which looks similar as a juvenile but does not have an upturned nose. 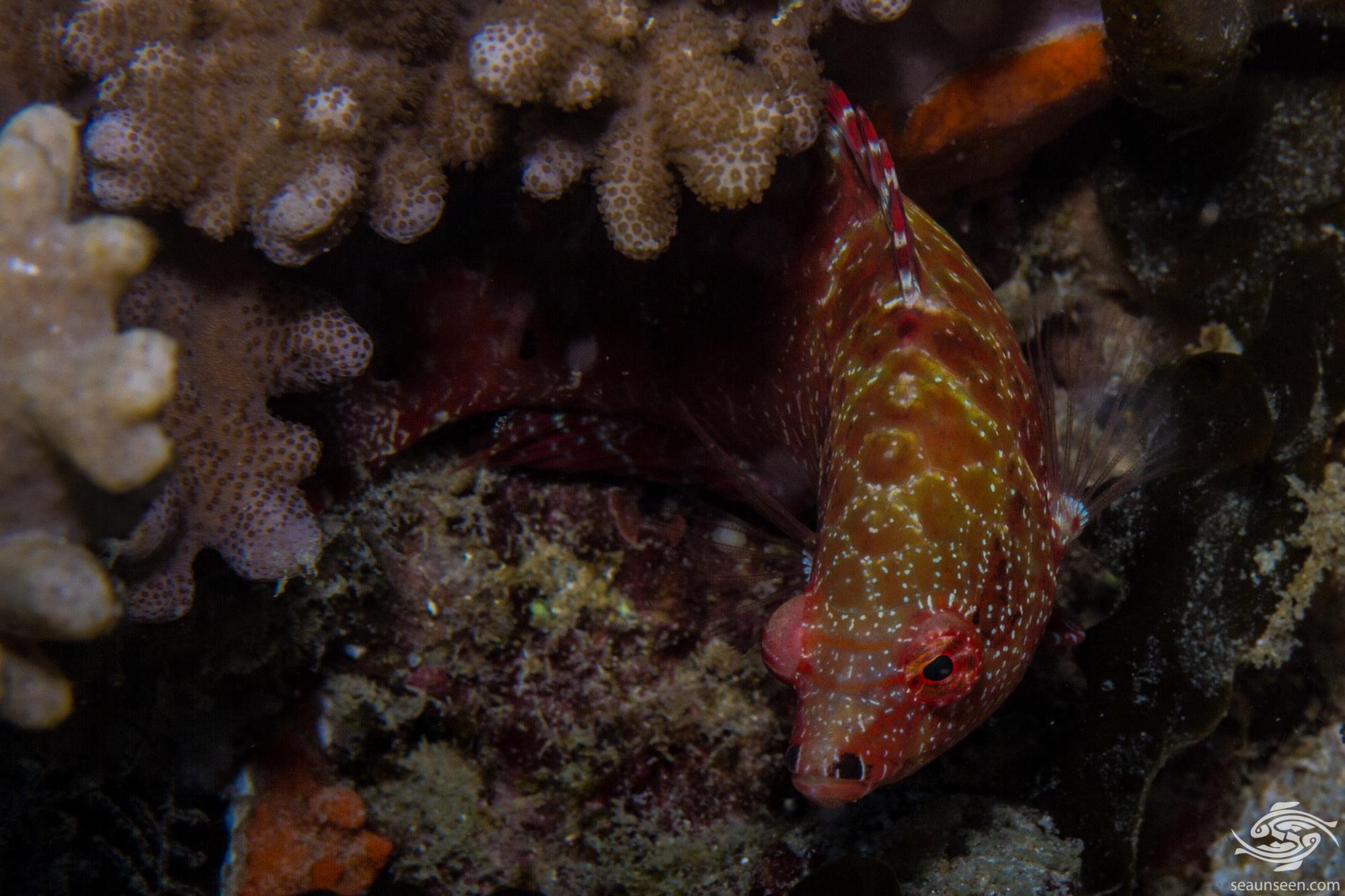 The nose area typically has a large number of white spots on it and there are often but not always three black dots in a horizontal line on the rear of the body and the caudal area.  There is a distinctive black dot on the first dorsal spine that is present across all the color variations. 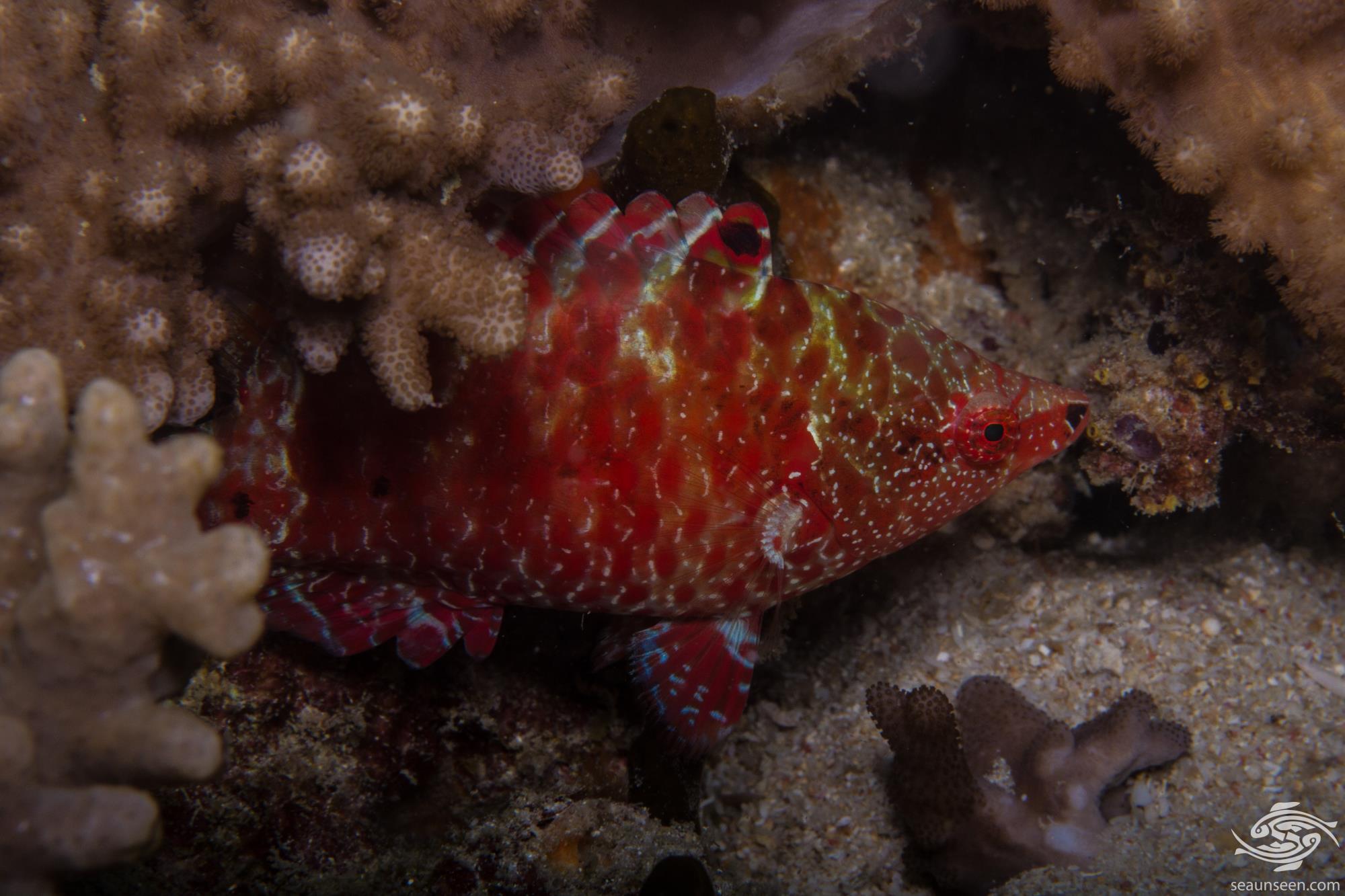 Many wrasse have the ability to lighten or darken their coloring and it seems that the Snooty Wrasse can at least darken or lighten its coloration on mood. When displaying mating behavior such as in the image above, the color is more intense than normal. In Tanzanian waters the largest specimen we have seen was around 15cm but they are reported to grow to 35cm. 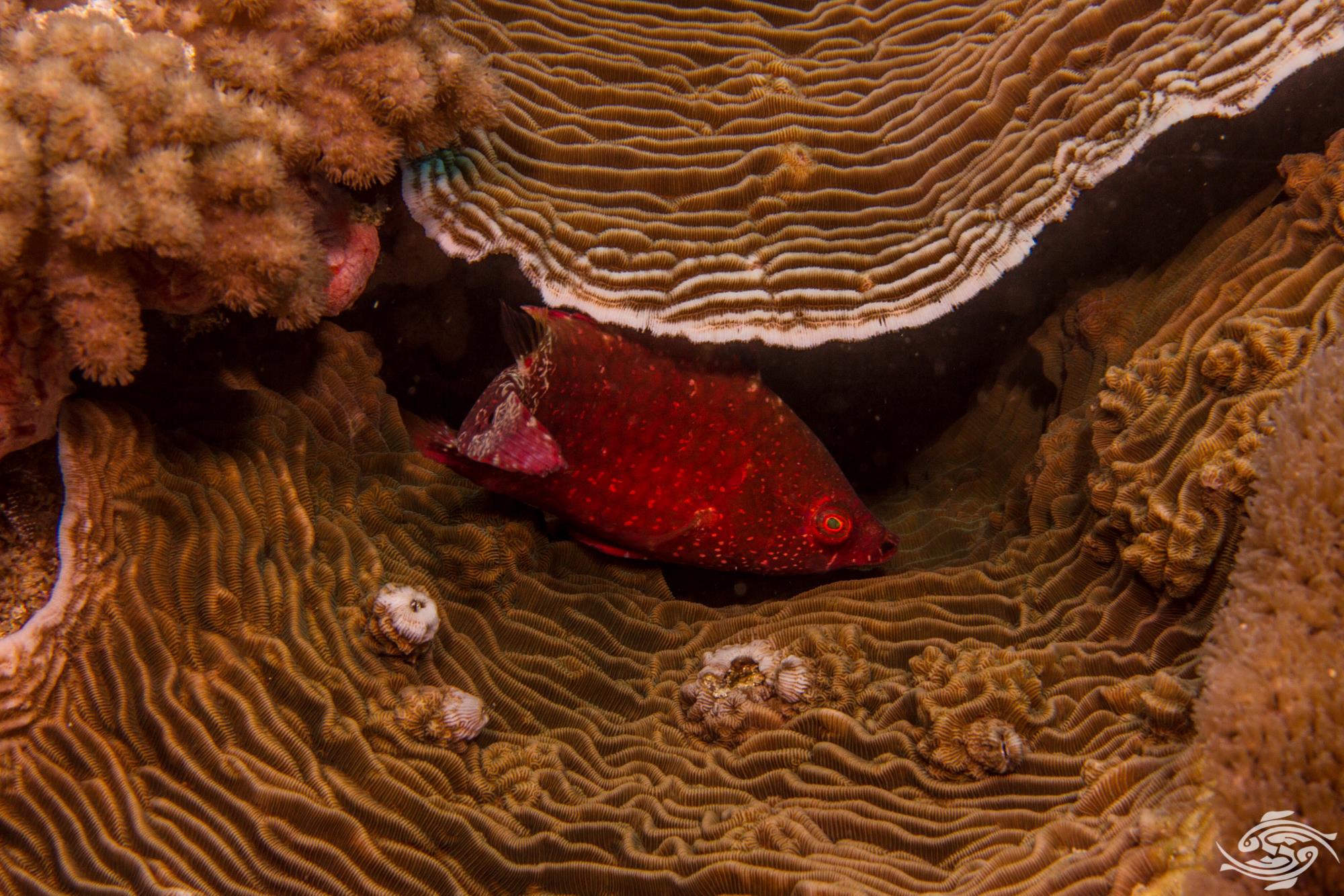 SNOOTY WRASSE IN THE WILD

The Snooty Wrasse is usually extremely cryptic and only when one encounters one posturing for a female does this behavior seem to change. Given that this is rare, they are extremely difficult to photograph. Usually the disappear as soon as they are seen. On one occasion we have encountered a specimen feeding with Goldsaddle Goatfishes, following the Goatfishes in the hope they would flush out  prey. Only on one occasion have we seen a pair together. They are usually singular. 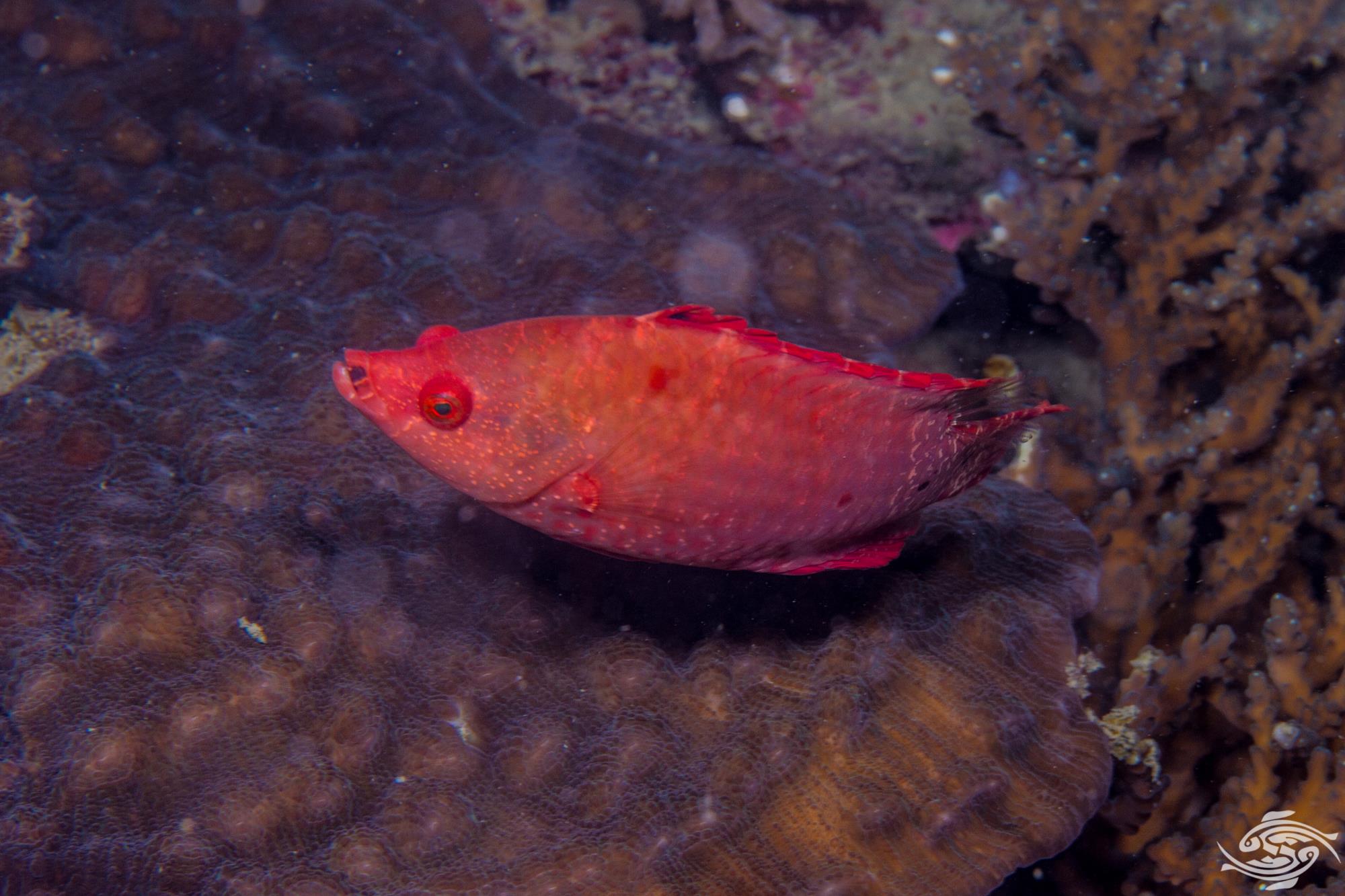 The Snooty Wrasse, is found across the Indian Ocean from East Africa across to the West Pacific in Australia. They are mainly seen around  corals and tend to swim very low close to the bottom. They are also common in soft corals on the top and sides of walls. In Tanzanian waters they have been sighted from 12 to 25 meters in depth. 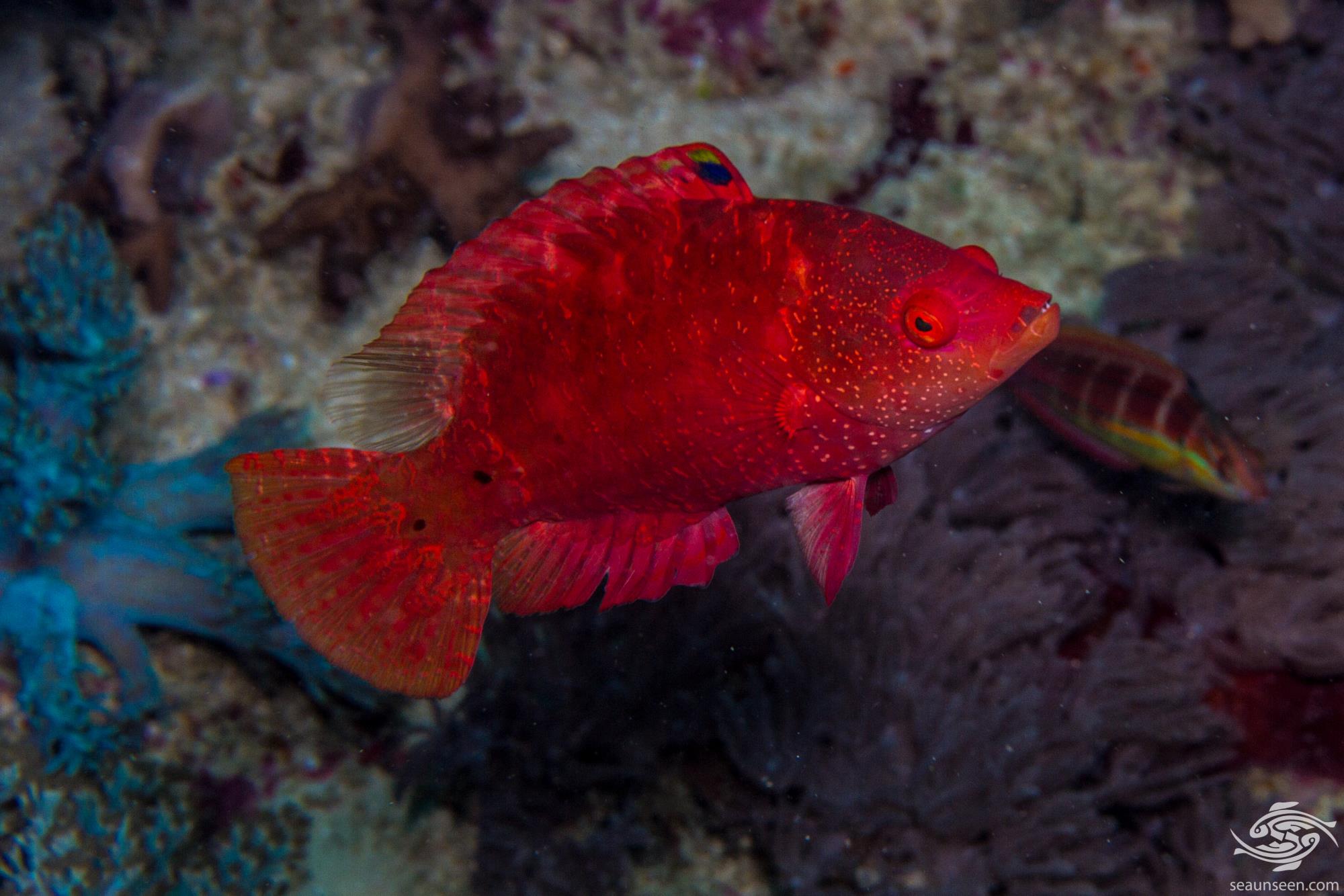 The Snooty Wrasse  feed on small crustaceans and mollusks and small fish.  On one occasion they have been seen swimming with goatfish feeding on the surface of the reef. This is not common behavior. Image further below. 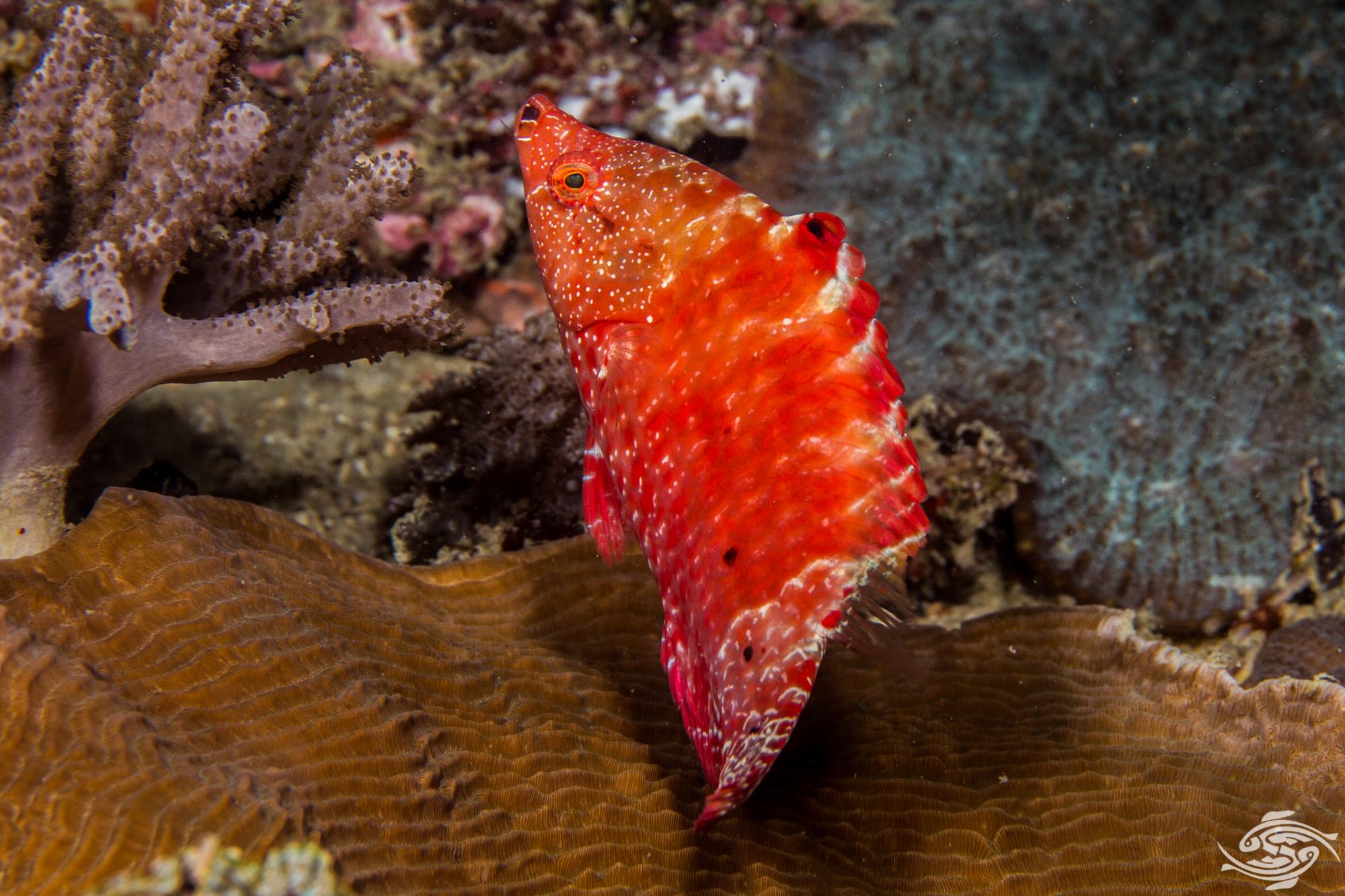 The Snooty Wrasse  is Oviparous, with probable distinct pairing during breeding. Little is known of their breeding habits but we have observed a pair engaging in probable mating behaviour. The male pictured above, was circling the female, posturing with his body at a 45 degree angle. The female quickly swam off but the male continued posturing for the camera.  This was on the top of a wall at about 24 meters in depth. 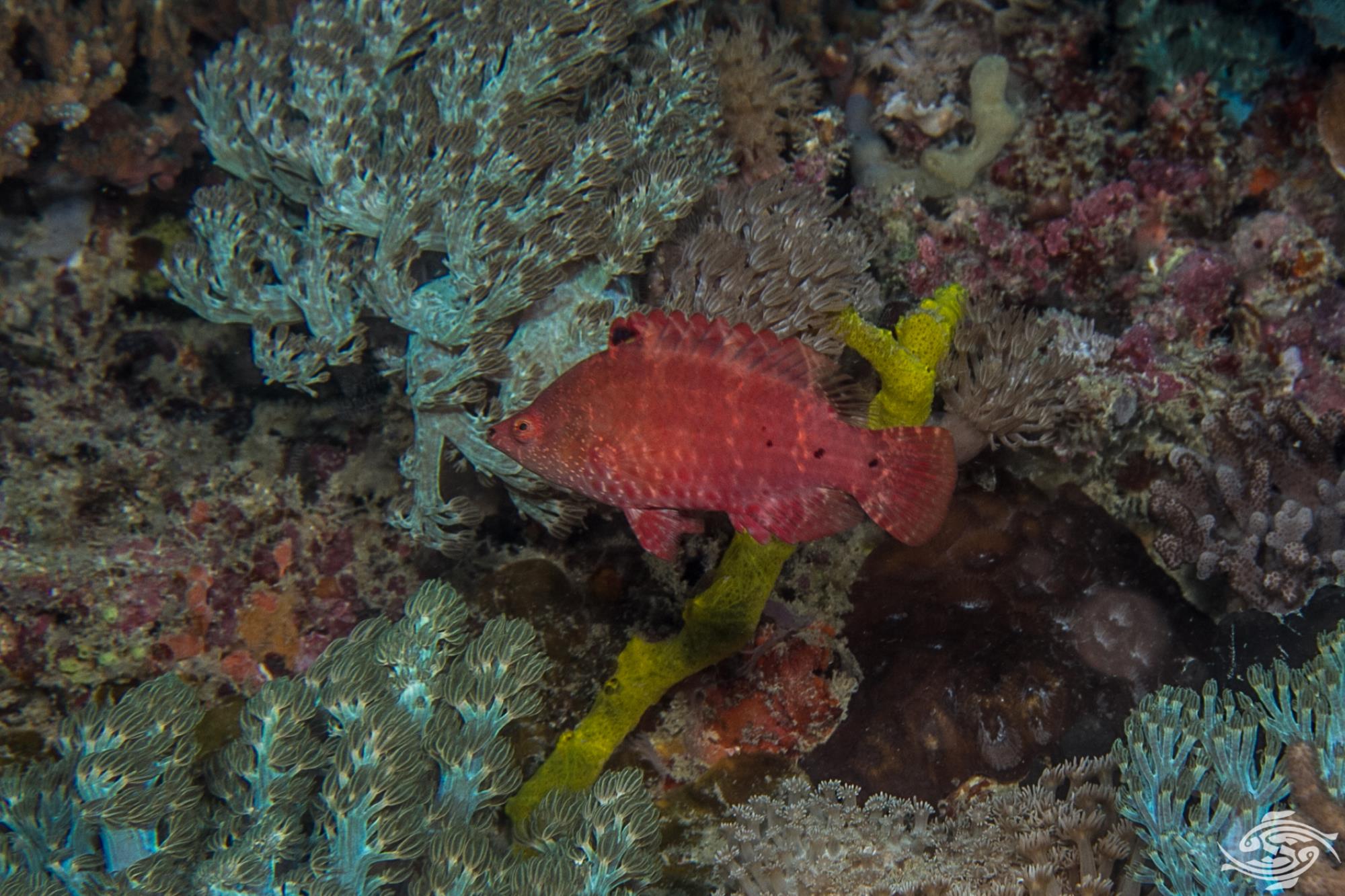 Snooty Wrasse are kept in aquariums but may become territorial and aggressive towards similar sized fish and because of this are probably not commonly kept. They require good hiding places and plenty of water to swim in. A larger tank is therefore a prerequisite. They may also take some time to acclimatize into a tank. Many people seem to confuse juvenile Floral Wrasse with these fish. Given that the Snooty wrasse reportedly grows to 35 cm , they are not for everyone to keep. 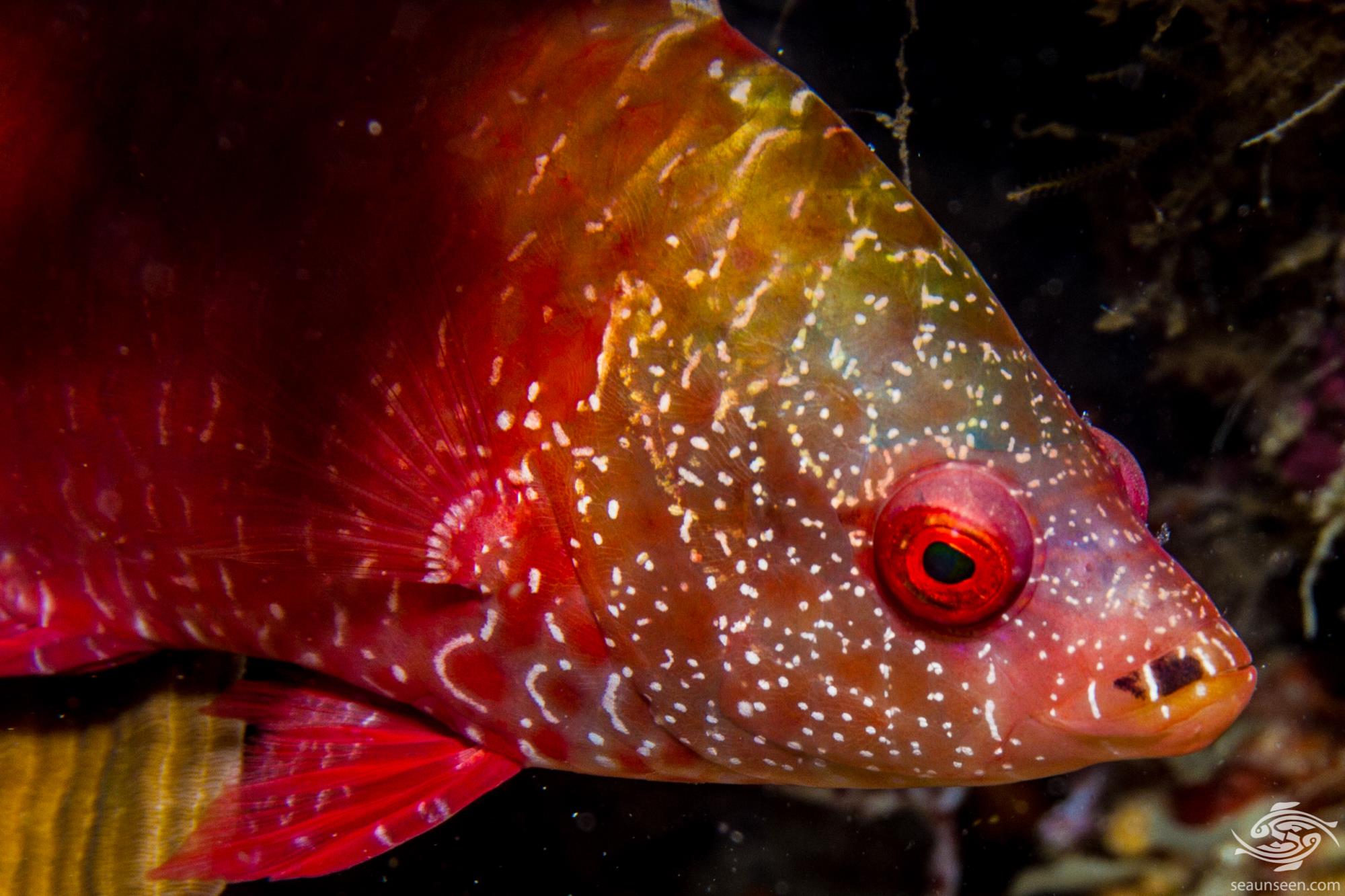 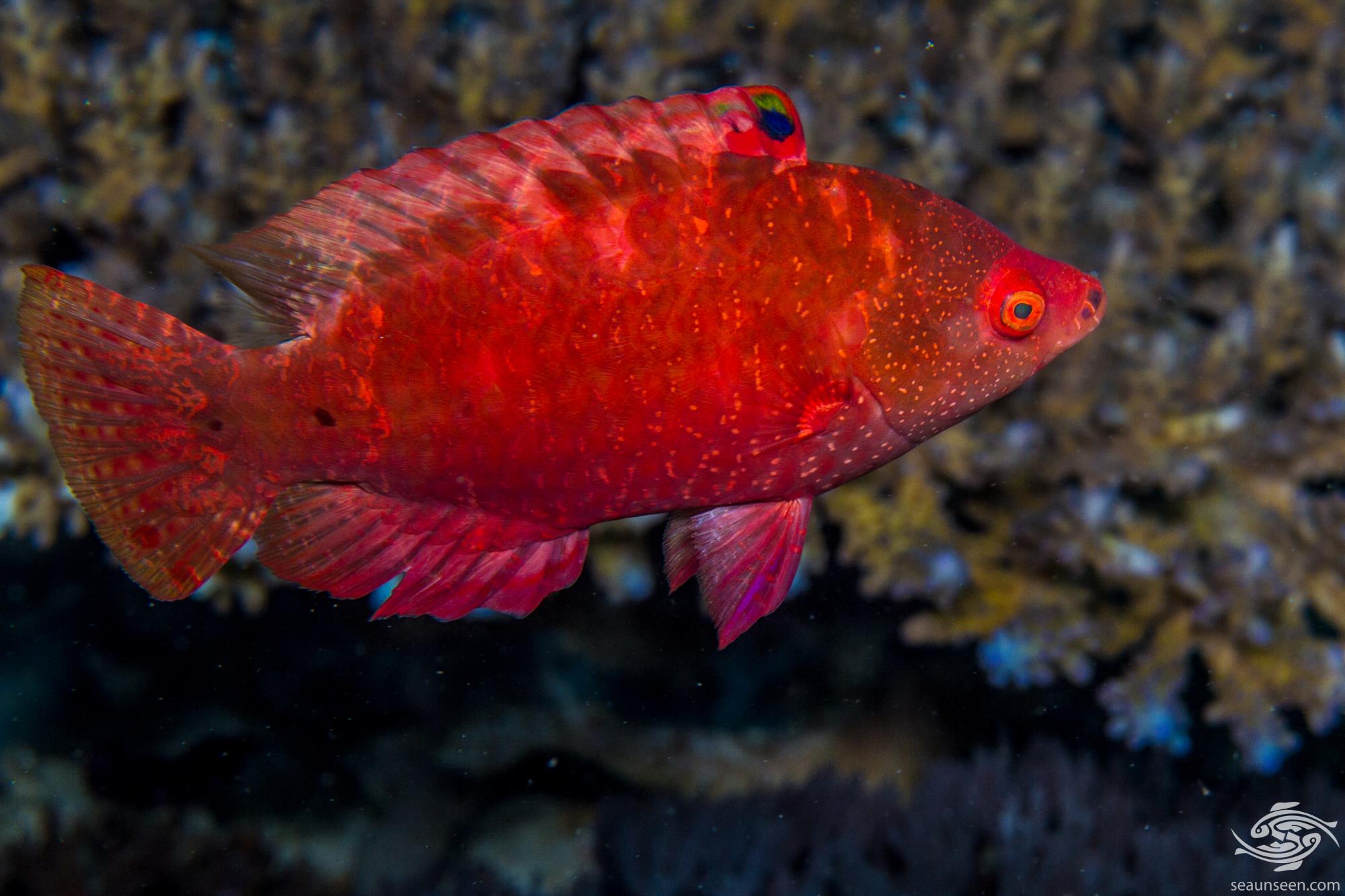