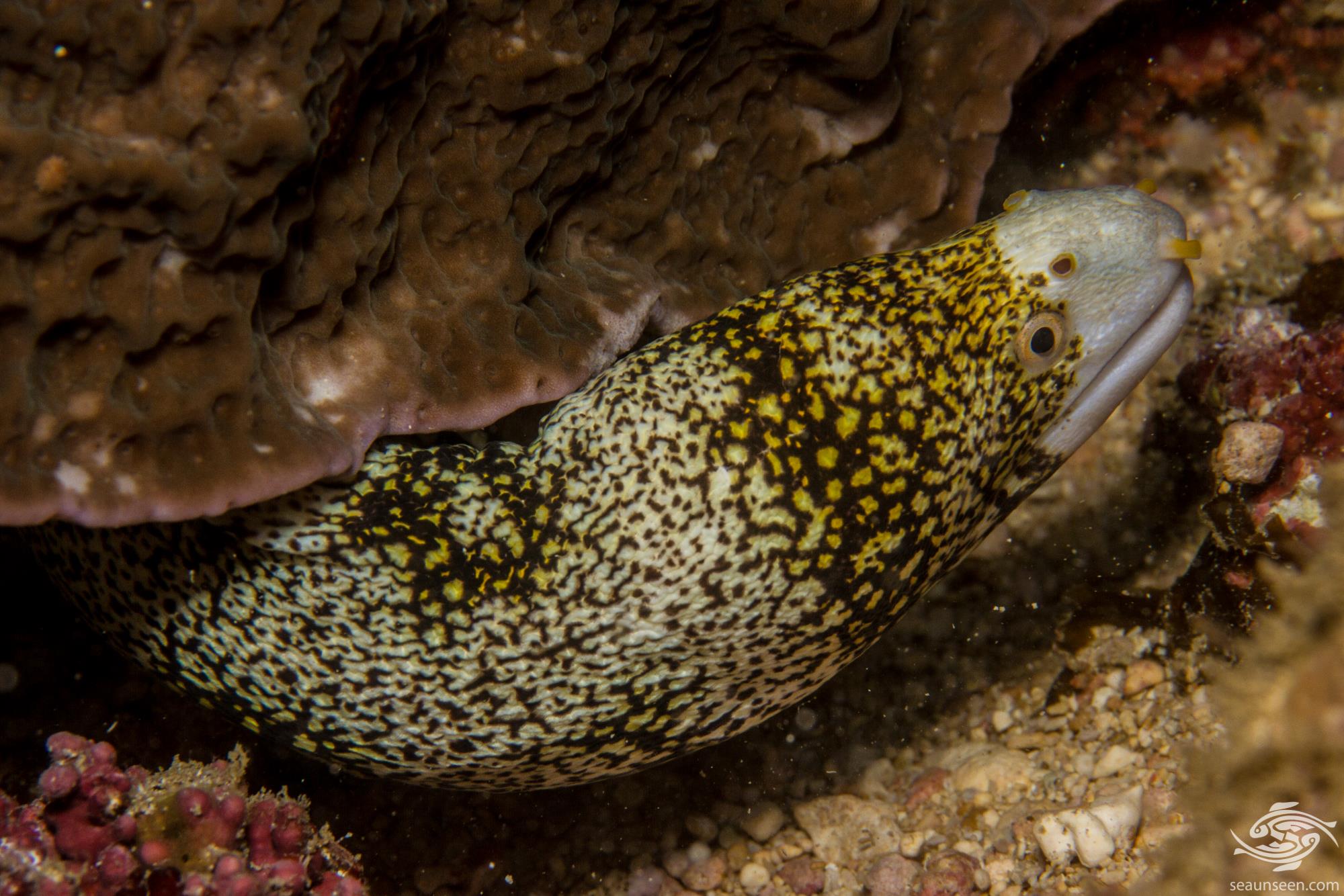 The Snowflake moray (Echidna nebulosa) also known as the Floral Moray Eel, the Starry Moray Eel and the Clouded Moray Eel.  They are not common in Tanzanian waters but neither are they very rare. 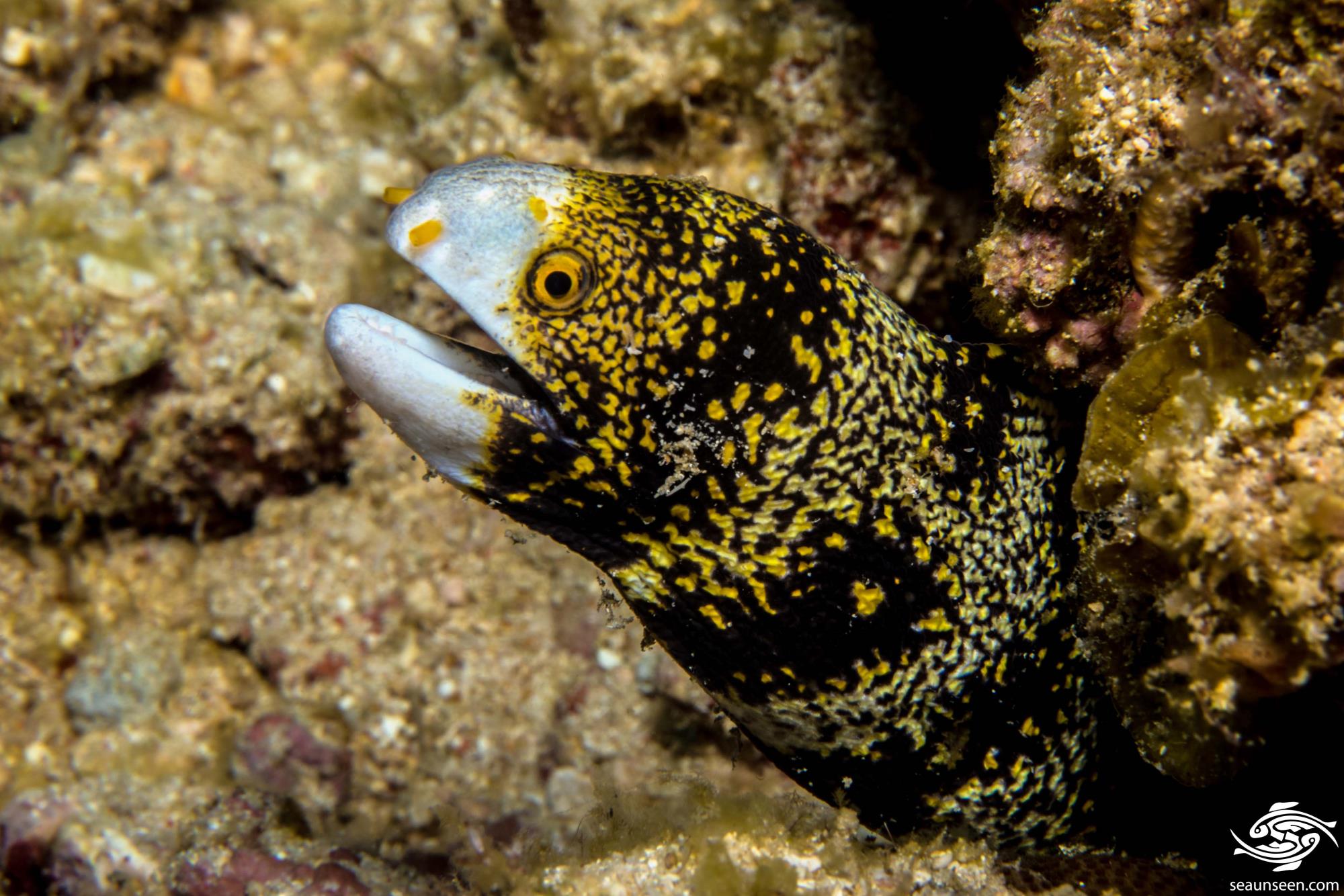 The Snowflake moray eel grows up to 90 cm in length.  Its serpentine shaped body has a light white-yellow coloured background color covered with a series of black and yellow mottled markings that can resemble snowflakes, stars or flowers giving it a series of physically descriptive common names.

These patterns run from the top of the body halfway down or from the bottom halfway up and sometimes alternate between top and bottom running down the body. The are minor variations in the color patterns and some eels are more white-yellow than others with less distinctive patterns.

The nose is white with yellow nostrils. Behind the head there is a thickening and the head is small compared to other moray eels with proportionally small eyes located forward. Snowflake moray eel’s have a second set of jaws known as pharyngeal jaws in their throat which may partially account for their thickened neck. More on that below under diet.

The mouth has small teeth for grinding or crushing the hard shells of much of their prey. They do not have pectoral or pelvic fins and the dorsal fin runs the length of the body. 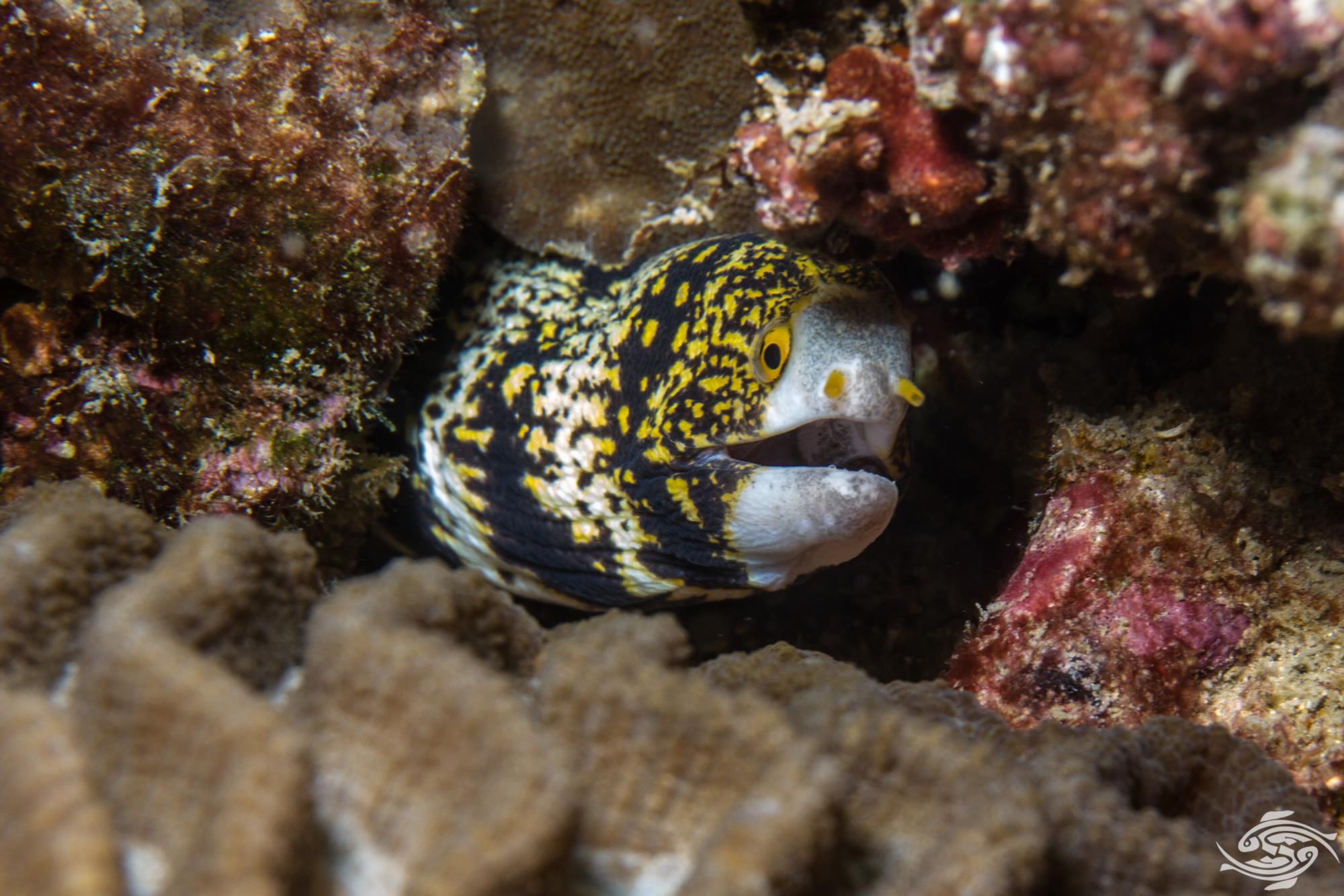 Snowflake moray eel are usually nocturnal feeders and spend the days in crevices in the rocks. We have never seen one out in the open during the day.  Occasionally they will be seen with their heads sticking out the crevices during the day. At night they are highly reclusive and disappear into a crevice at the first sight of a light. 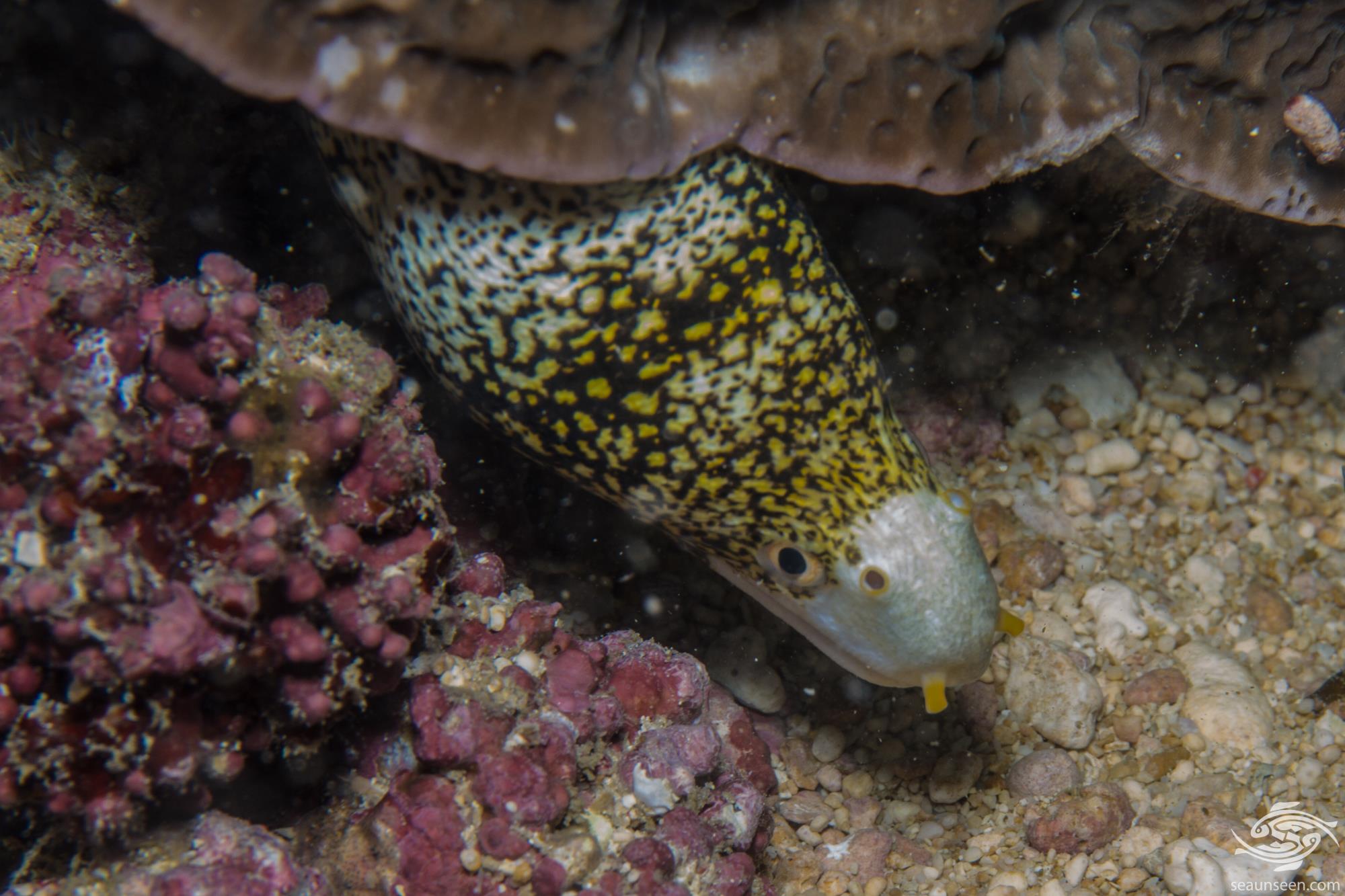 Much of the bite damage occurs when one pulls ones hand back after being bitten. Many experts state that one should not pull back, however they should go try it themselves. The bite is usually sudden and unexpected and it is natural to pull away from it.  I have personally seen one diver who lost the use of his thumb from a giant moray bite but that is unusual. 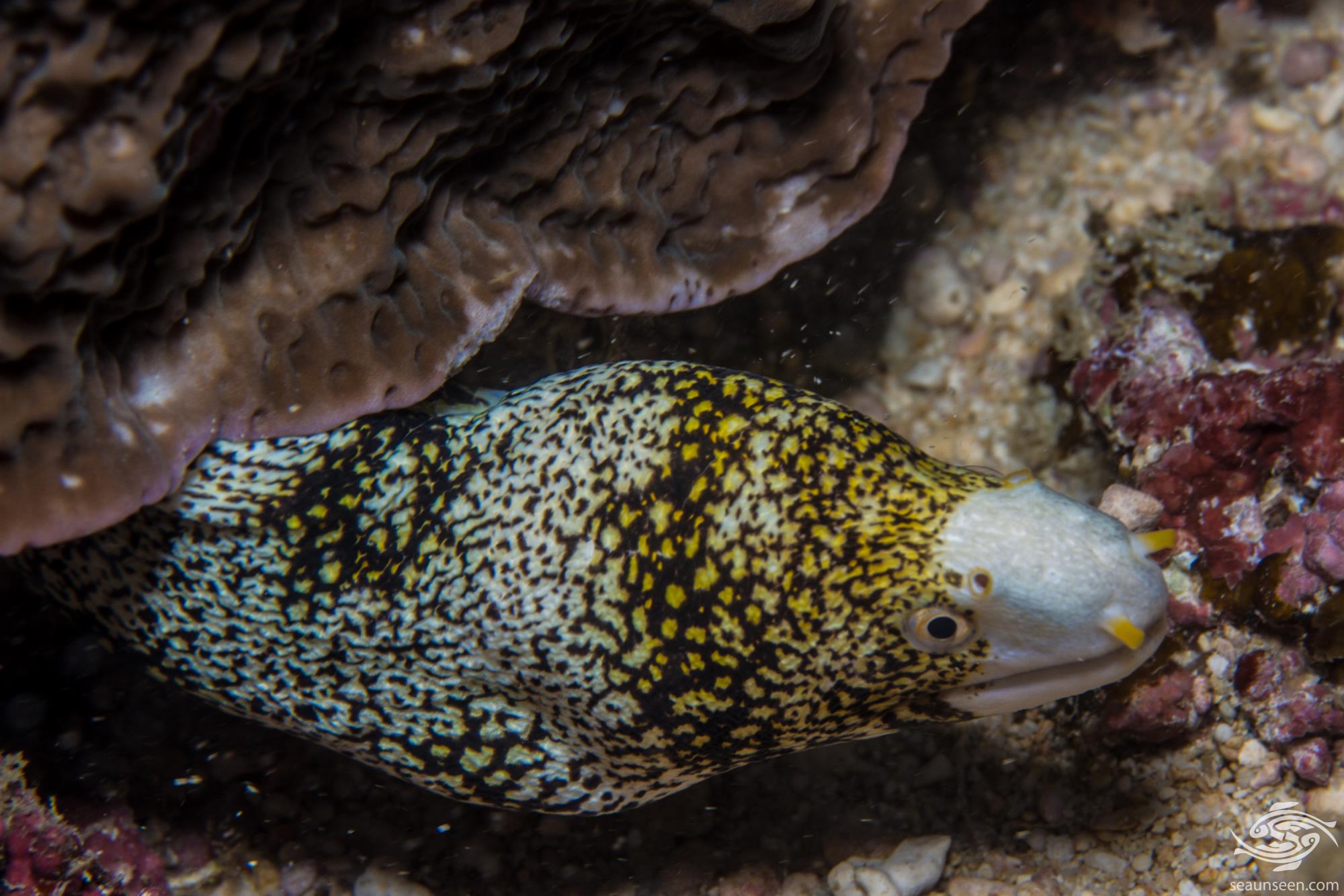 The Snowflake moray eel is widespread across the Indo-Pacific area, being found from the East Coast of  Africa from south of Durban northwards, Red Sea included, across to the Pitcairn group, Hawaiian islands and  Polynesia. North to south in Japan and south to New Caledonia, Fiji and Australia.
They are found in rocky reefs, coral reefs and occasionally in lagoons provided there is shelter. They are found from depths of 1 to 50 meters. 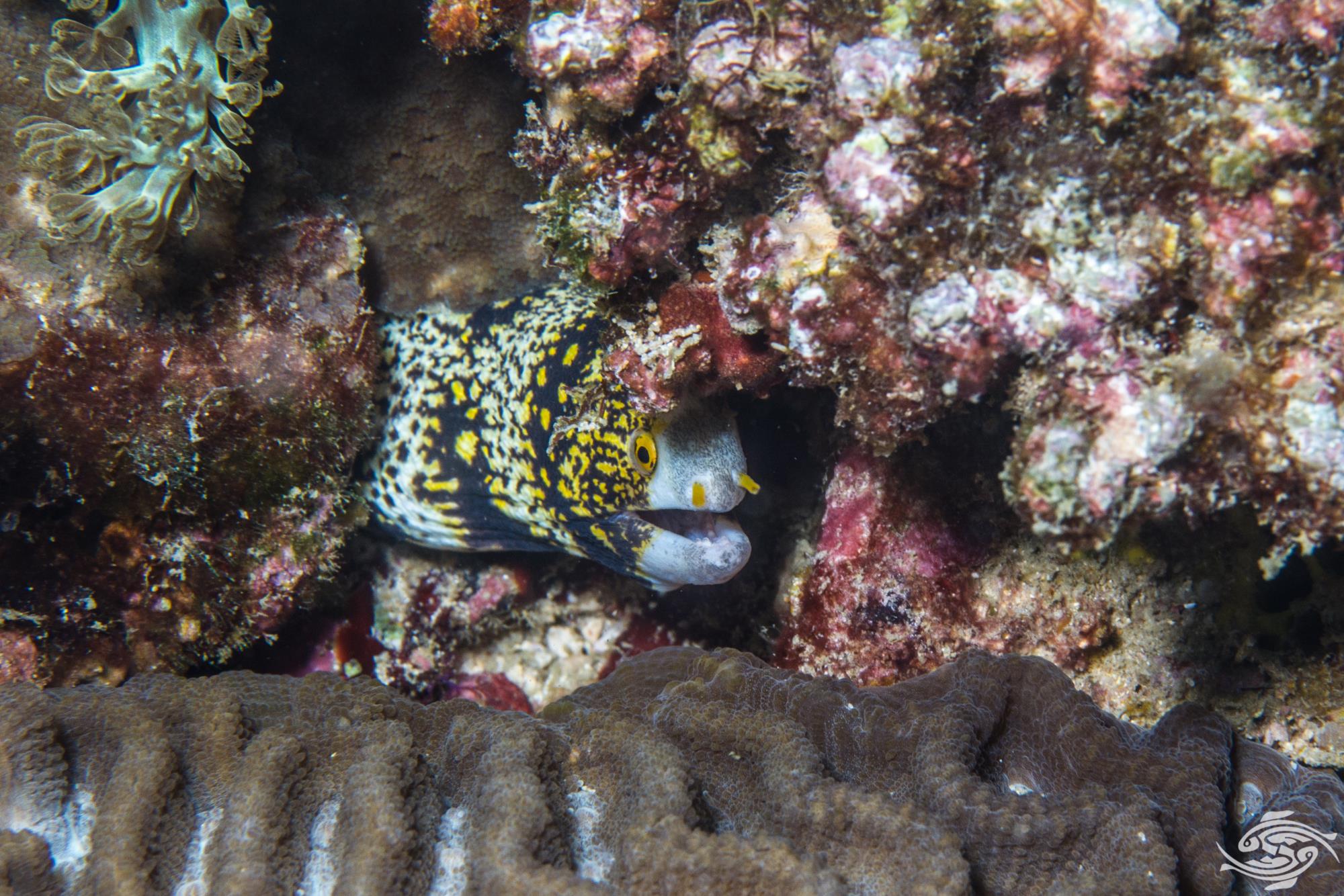 The Snowflake moray eel is carnivorous, and does most of its hunting at night.  They feed mainly on small fish and crustaceans. Moray Eels have relatively poor eye sight but they have an excellent sense of smell that they use to detect their prey. 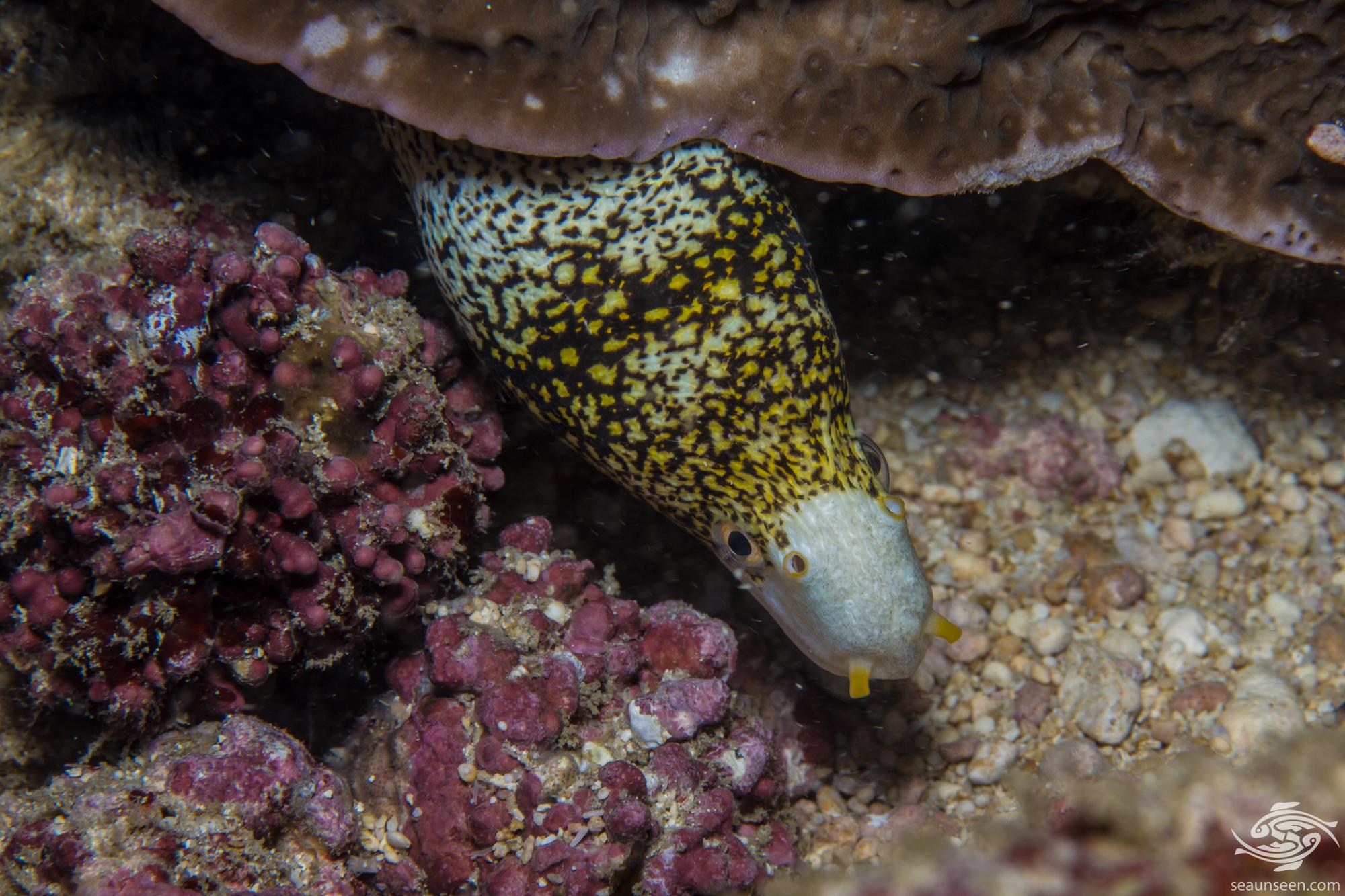 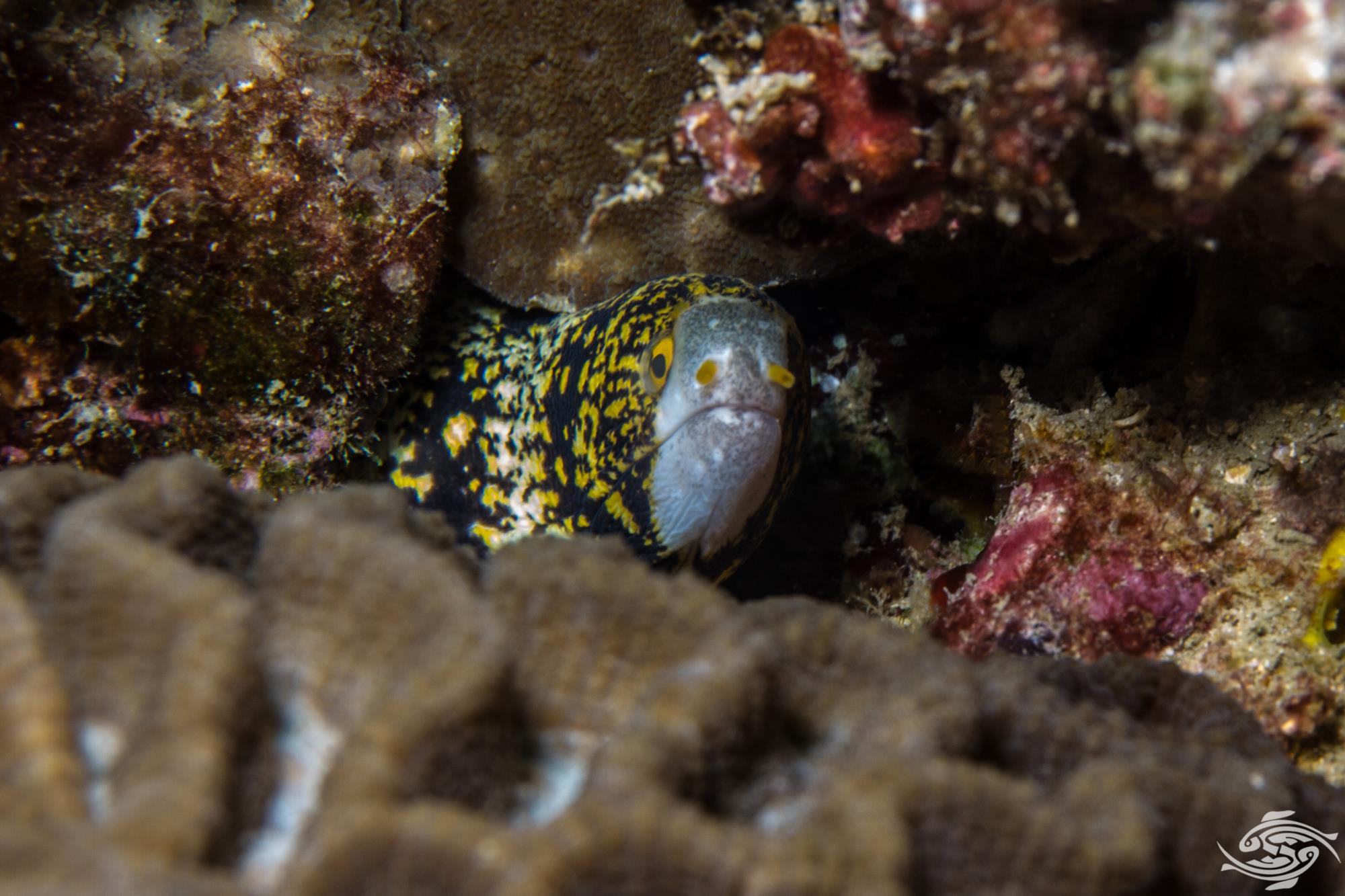 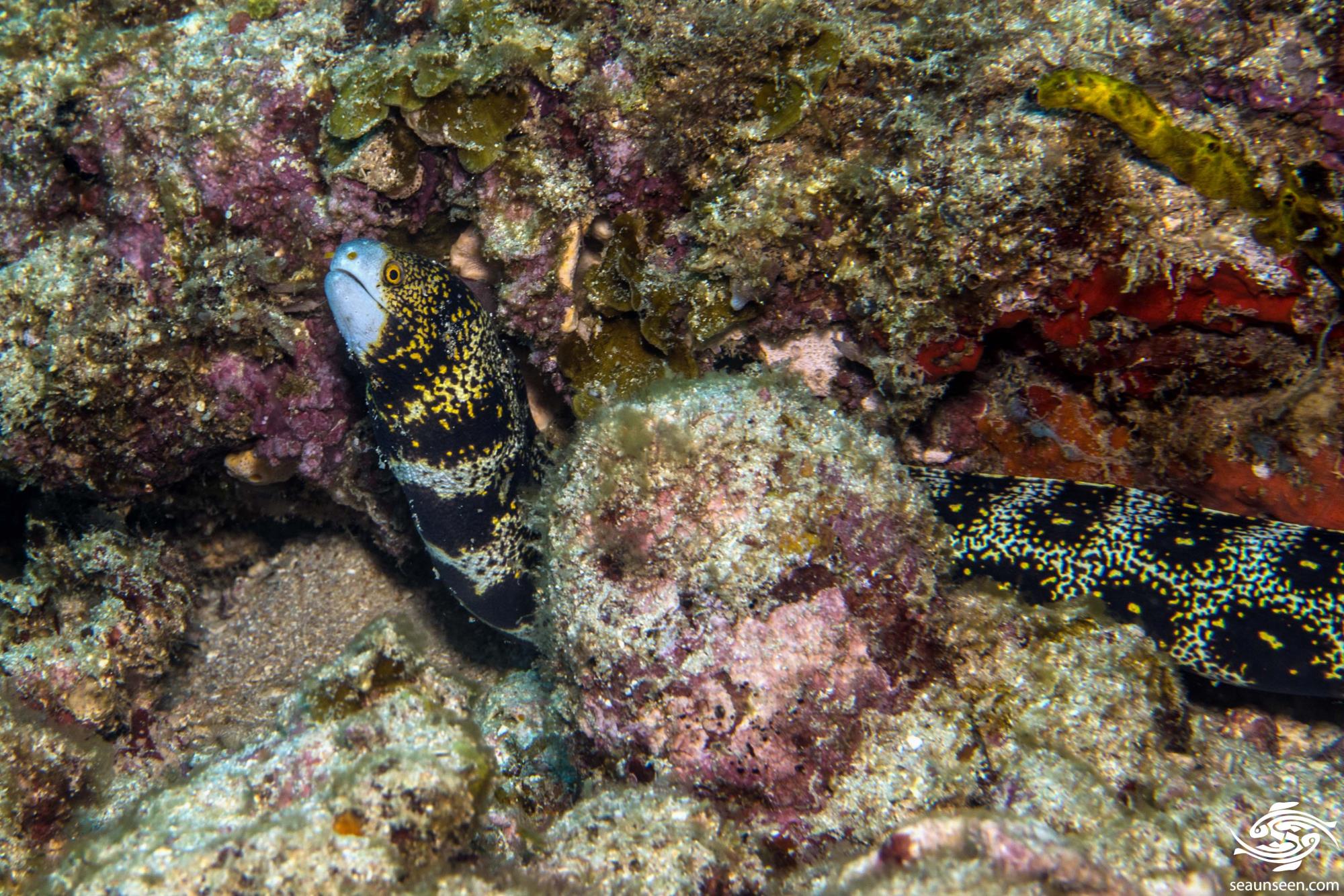 Snowflake moray eel’s, being attractive looking and relatively small and more peaceful than the other larger species of Moray Eel are a favorite with some aquarists. They will eat smaller crustaceans such as shrimp and crabs and are messy eaters so require a good filtration system.

Being carnivores they may also take smaller fish but are relatively easy to wean onto a frozen diet. Being eels they will certainly try and leave their tank and the top should be very well secured to prevent this. Many aquarists have come home to find their prized specimen dried out on the floor and it is best to avoid this.