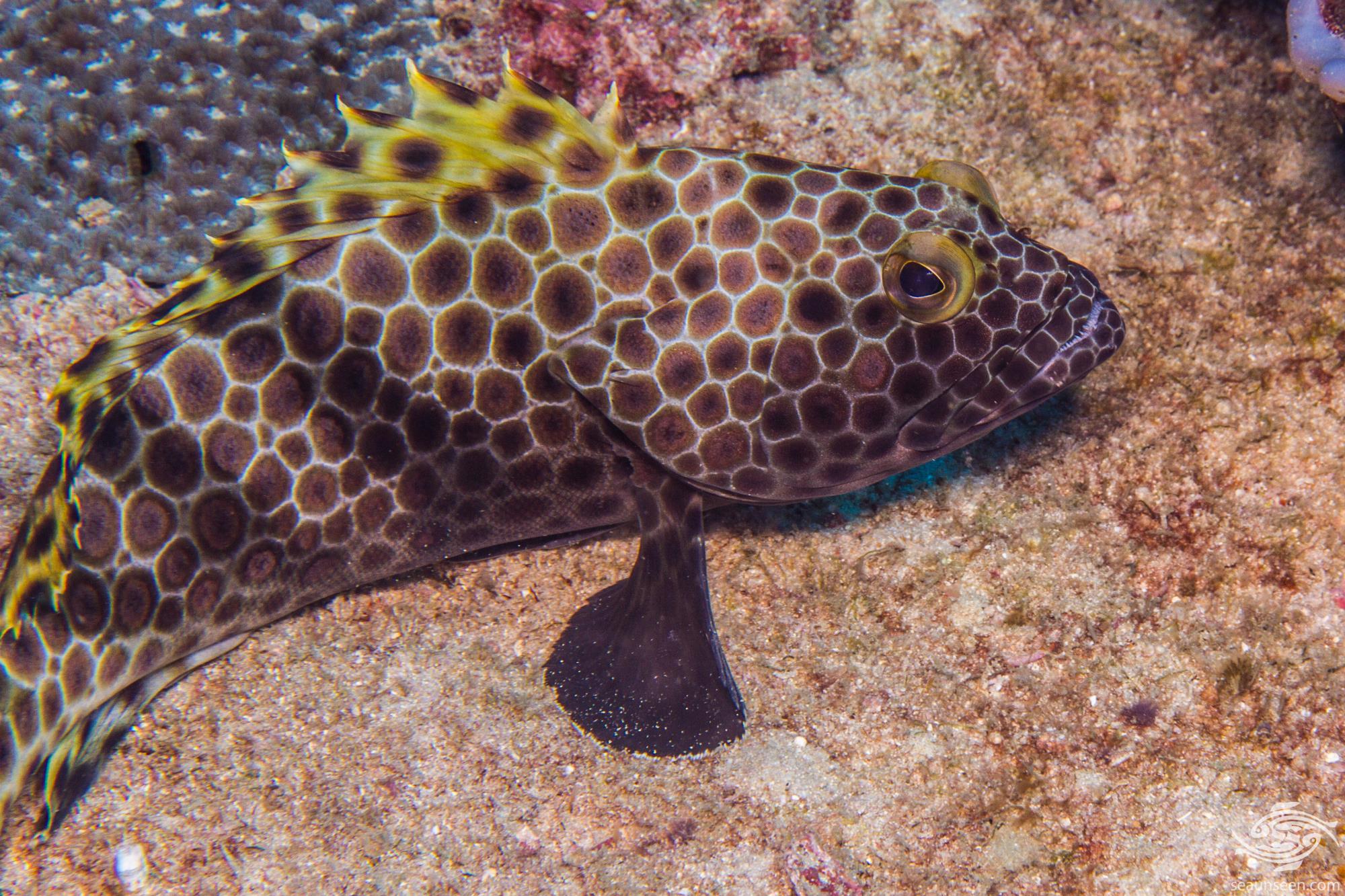 The Snubnose Grouper (Epinephelus macrospilos) is also known as the Large-spotted Rockcod, Bigspot Rockcod and Longfin Grouper. They are one of the eight species of reticulated groupers that live on coral reefs.

Because of their ability to both darken and lighten their coloration , these grouper can be difficult to distinguish. Snubnose Grouper are not as common as some of the other smaller groupers in Tanzanian waters, perhaps because of overfishing. 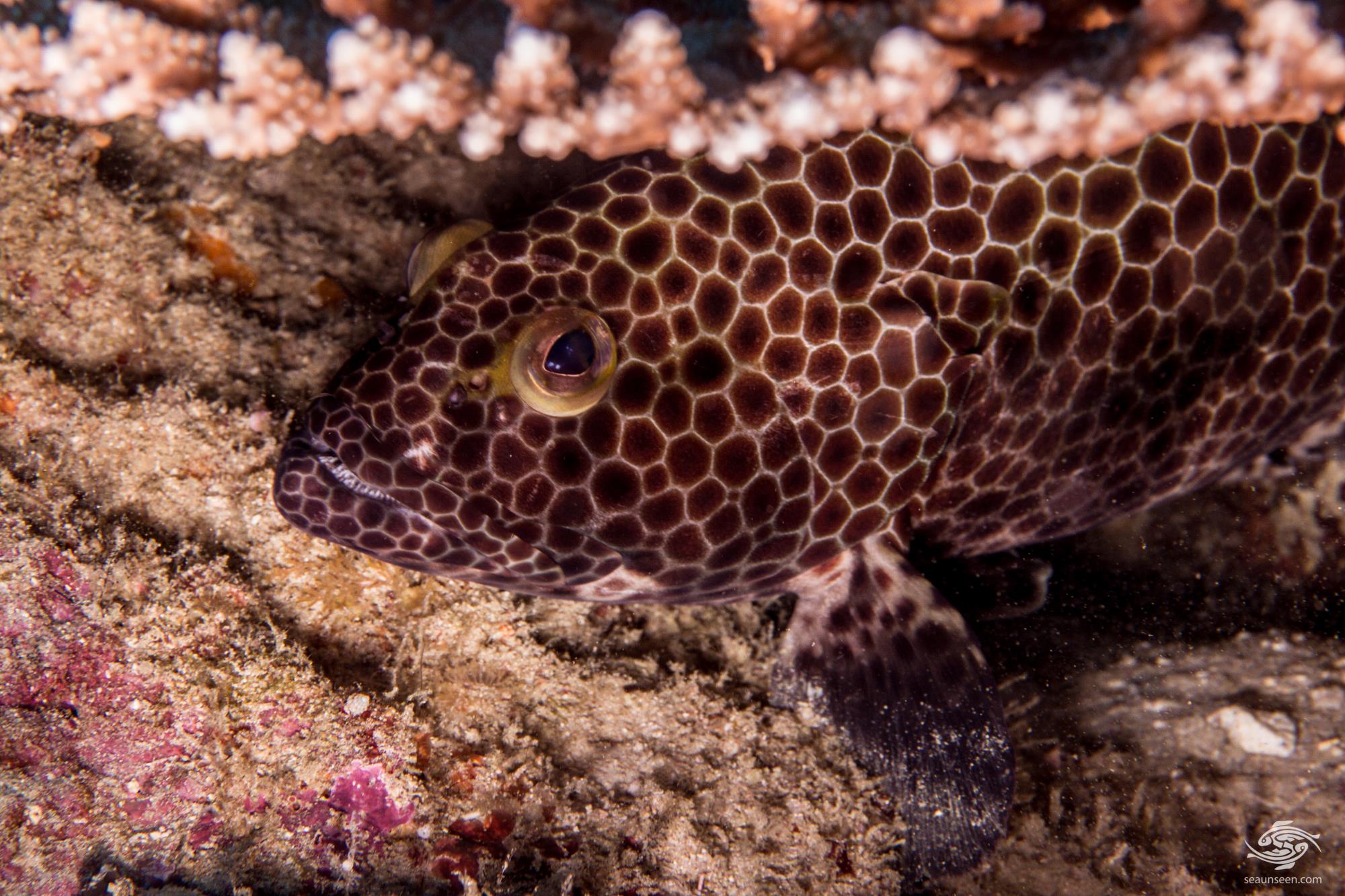 The Snubnose Grouper has a fairly typical grouper shape, as a juvenile  perhaps not quite as robust as other groupers with the body being proportionally slightly thinner.  As an adult male the head thickens somewhat as seen in the first image above. It’s typical coloration is a very light brown body with a large number of hexagonal dark brown blotches which form a distinctive honeycomb pattern. The dorsal fin has yellow on it that is only visible when the fin is lifted .   They grow up to 52 cm in length. The adult males are slightly larger than the females. 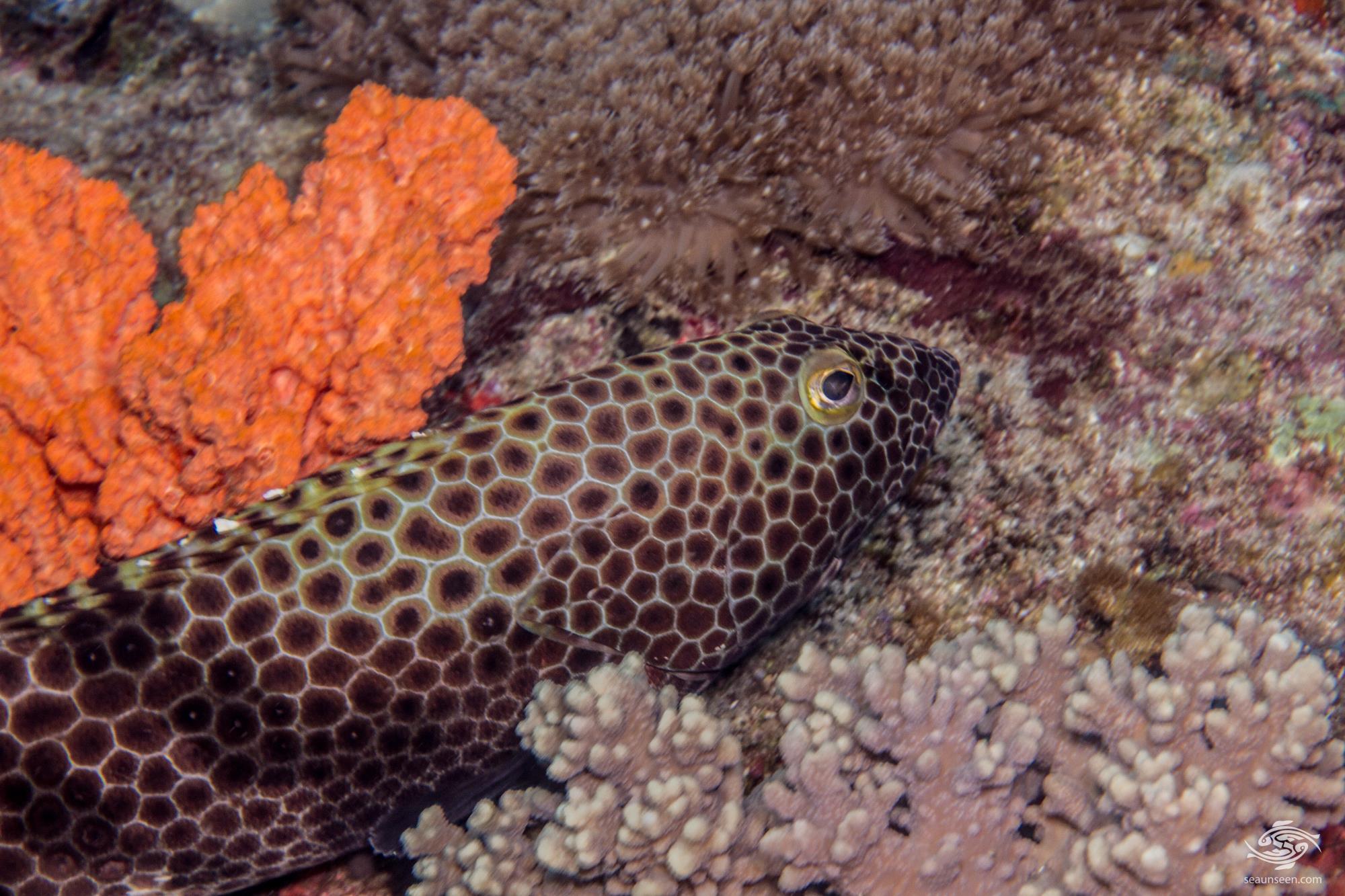 SNUBNOSE GROUPER IN THE WILD

The Snubnose Grouper is very reclusive in the Tanzanian coastal waters and as a rule tends to head for cover at the first sign of a diver. This is undoubtedly due to the practice dynamite fishing now fortunately stopped as of 2017. On the offshore islands of Mafia and Zanzibar they are not as shy. Occasionally one comes across a male who stands his ground when he sees a diver and lifts his dorsal fin to make himself look larger. They are almost always found solitary and it is speculated that the group spawn on the new moon. 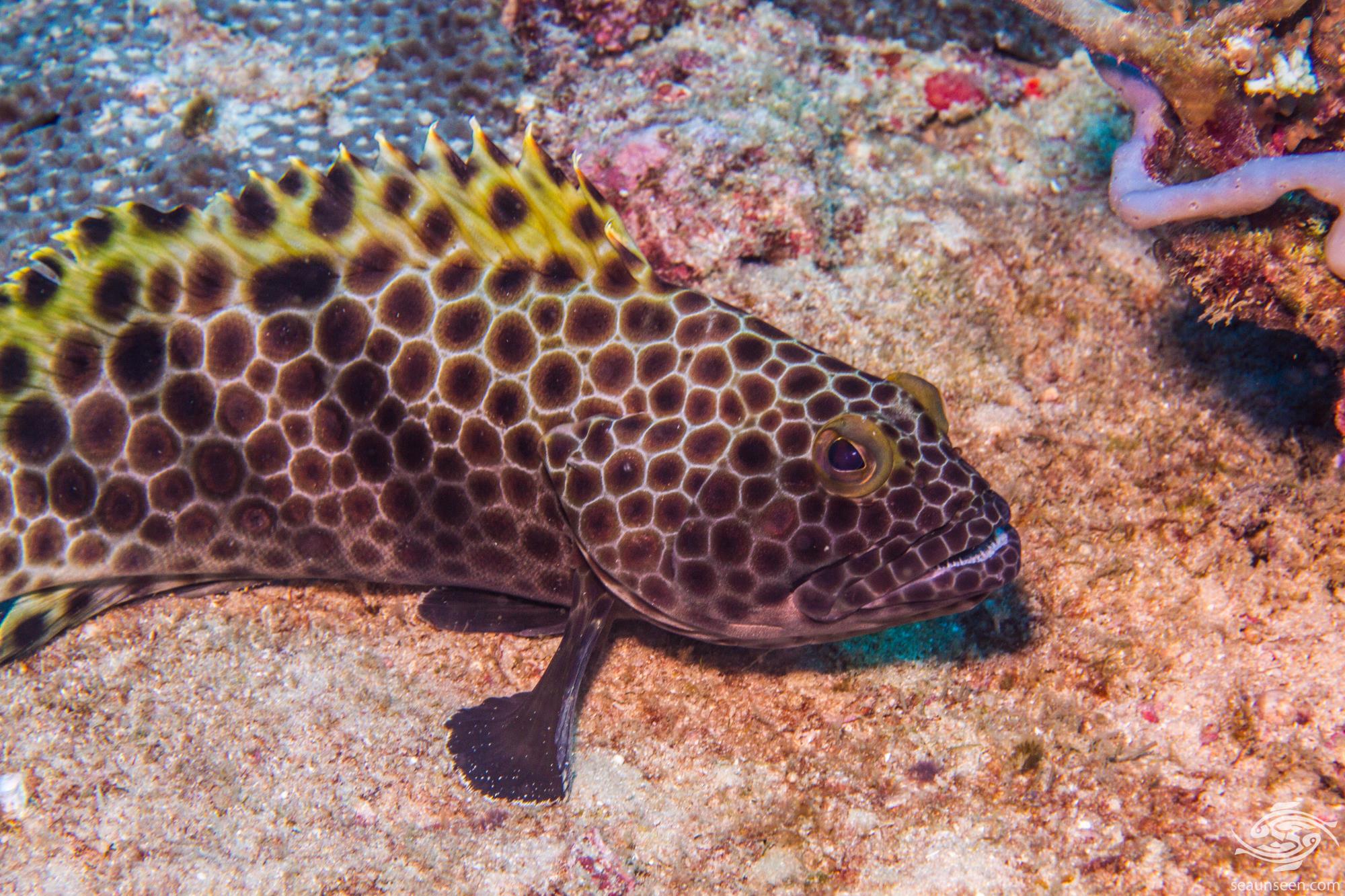 Snubnose Grouper are found on the East African coast from South Africa to Kenya across to Japan and the central Pacific. They are not found in the Red Sea and on the Asian mainland.

In 1956 they were introduced to Hawaii as a possible new food source.   In Tanzanian waters they are usually seen on coral reef from 15 meters downwards. 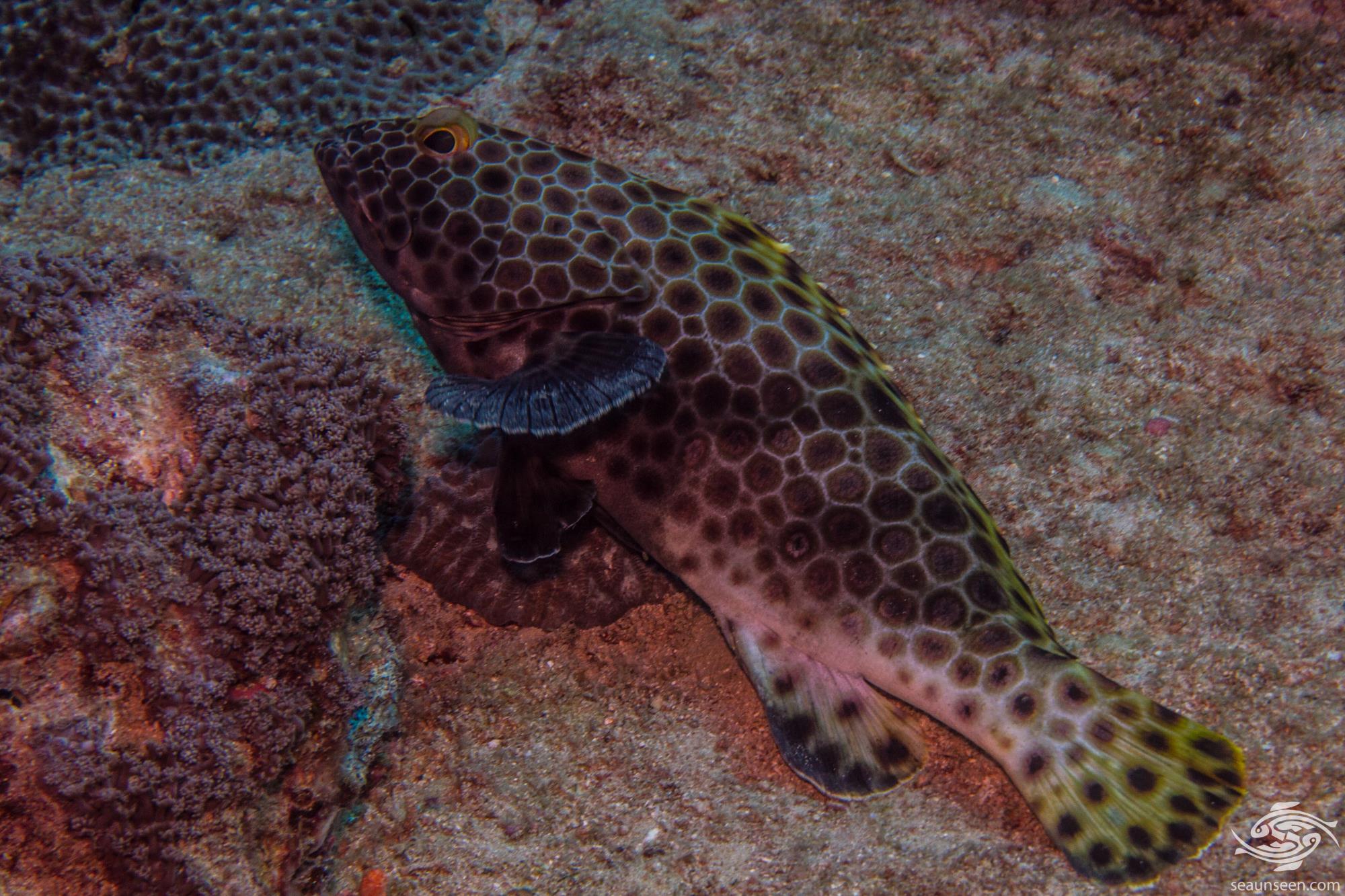 The main diet of the Snubnose Grouper is crabs with small fish making up 20 % of its diet.   They are ambush predators who vary their diet according to location and availability and as with most groupers are opportunistic and will take bait indicating that they will scavenge to some extent. 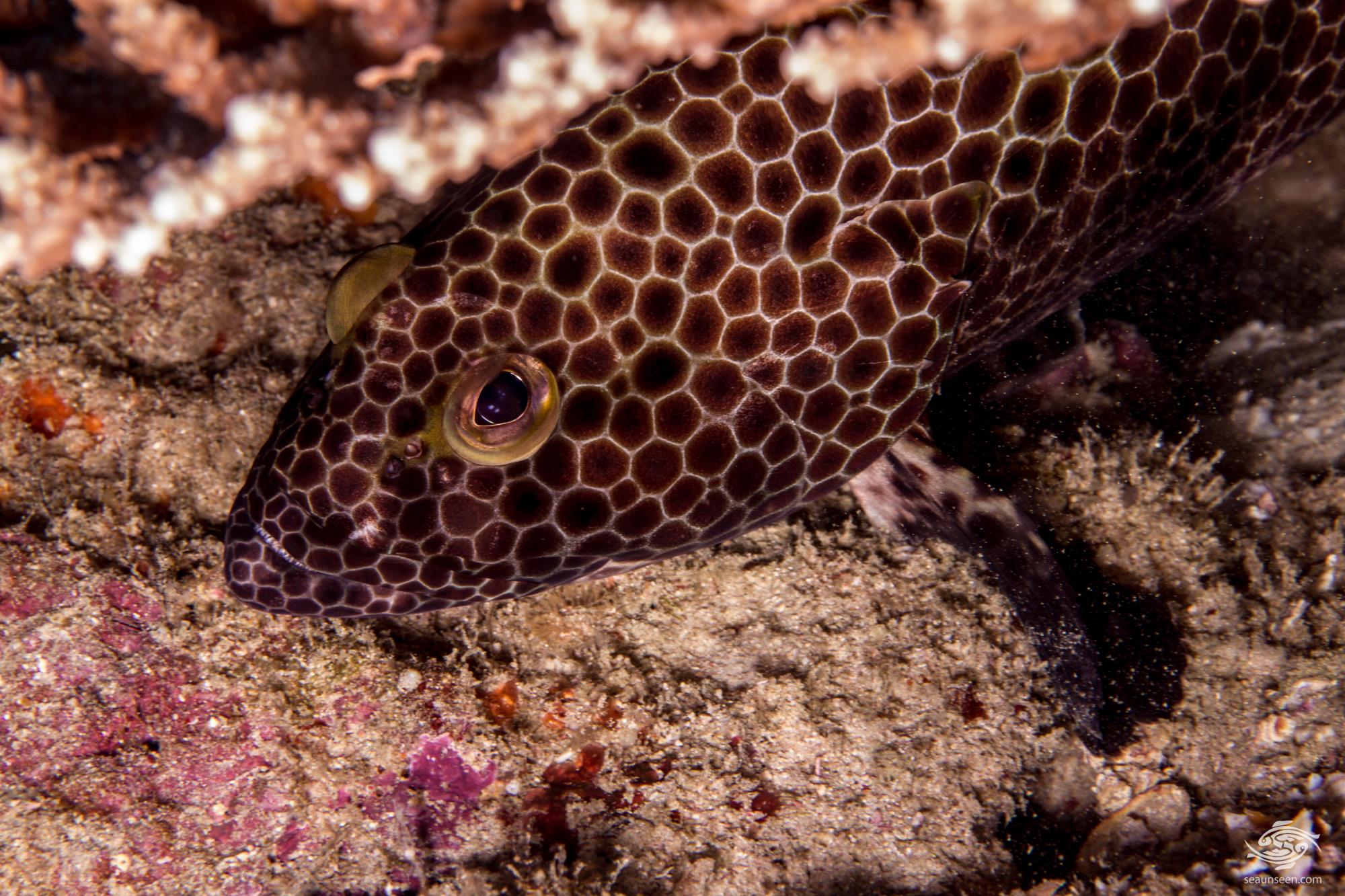 Snubnose Grouper are usually found solitary. Spawning is thought to take place in group spawning events.  They are protogynous hermaphrodites and even the adult males have the ability to change to a female if necessary. This allows them to be more resilient to overfishing. They also mature at younger ages than most other groupers. When the female is ready for mating the lower body swells with eggs as can be seen in the image above. 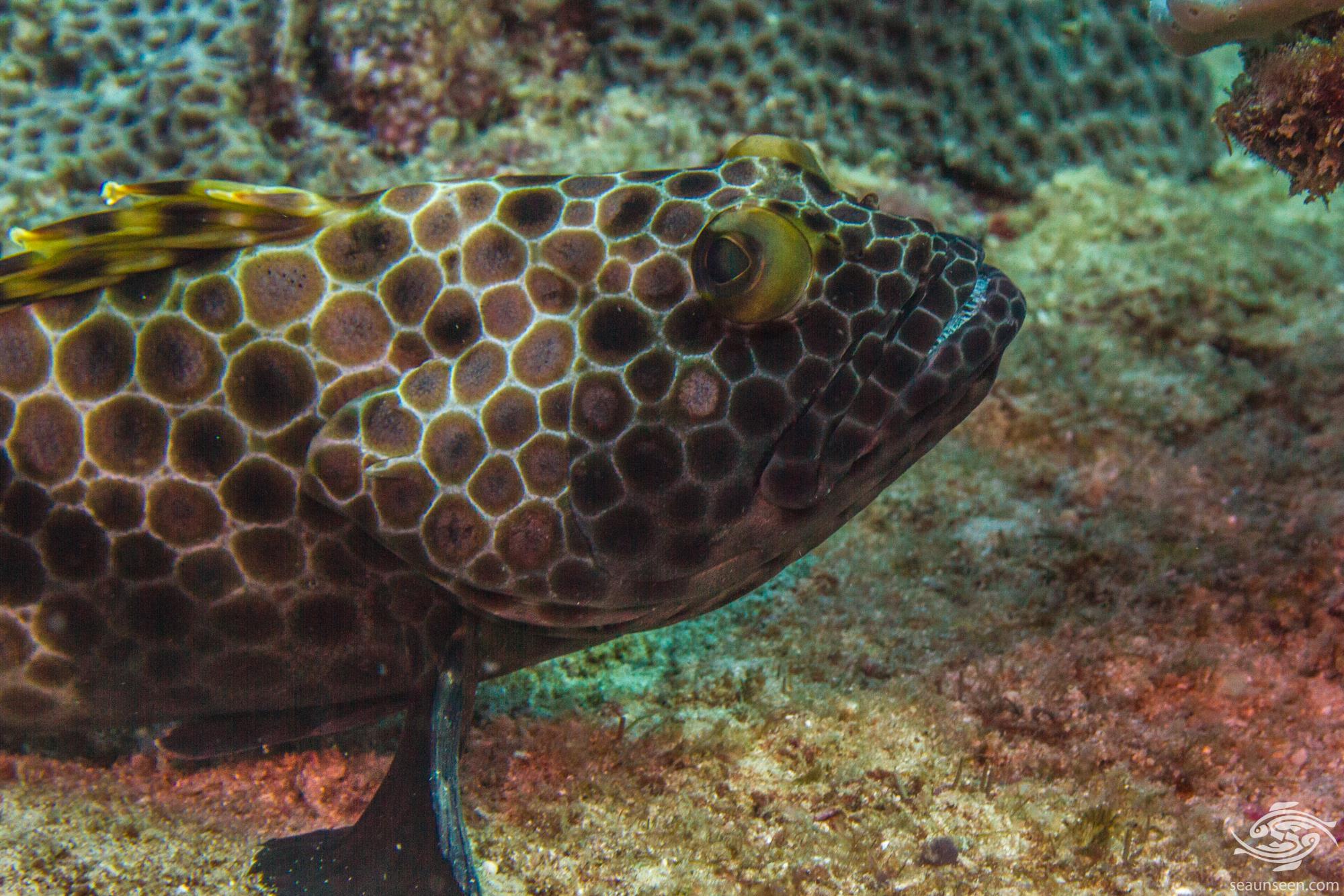 The Snubnose Grouper is certainly over fished by subsistence fishermen in Tanzania. Most inshore areas of the Tanzanian coast are heavily over fished.