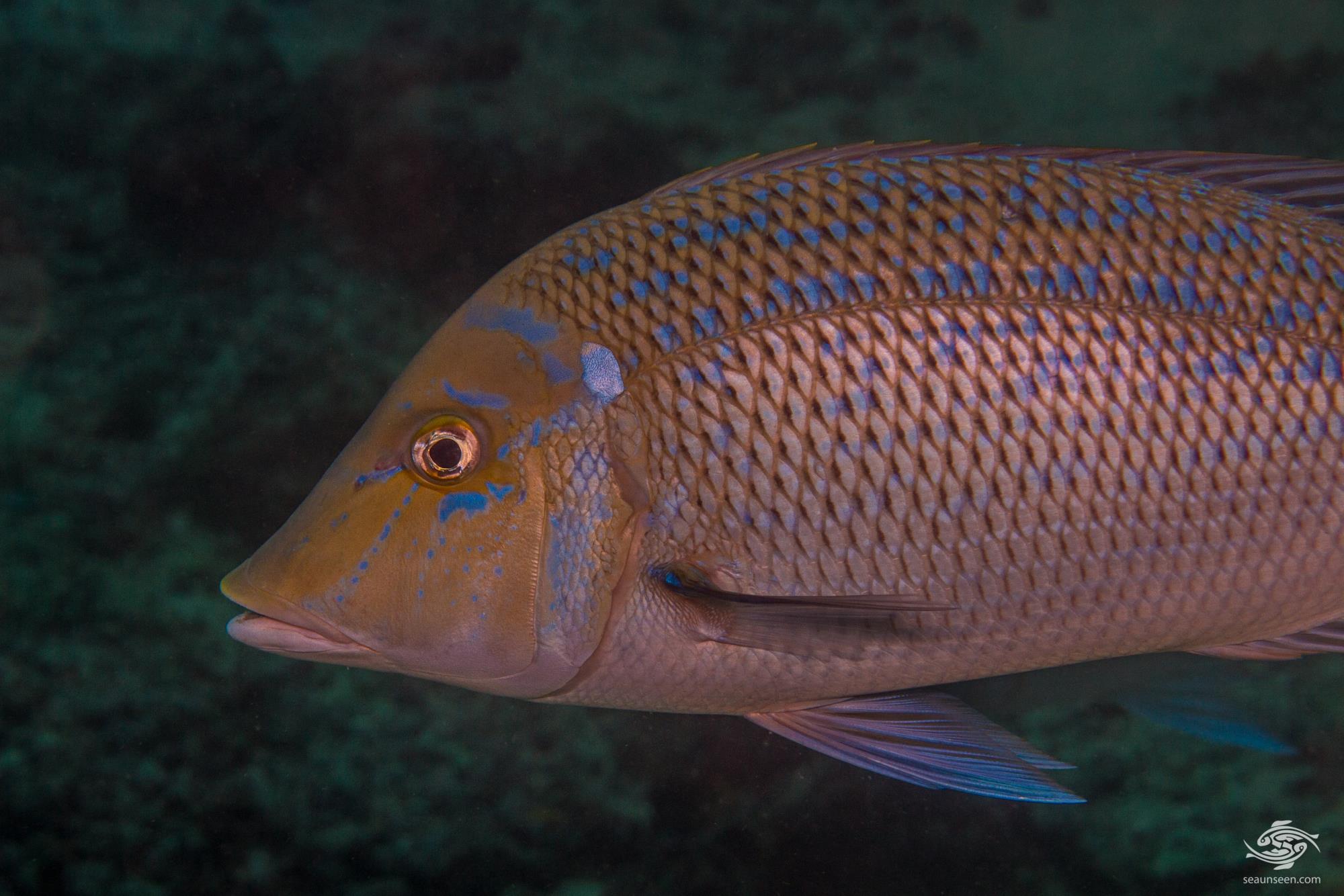 The Spangled Emperor (Lethrinus nebulosus) is also known as the Yellow Emperor, North West Snapper, Bridled Pig face Bream, Sha’ri and the Yellow Sweetlip . They are generally only seen in any numbers in the Marine Parks in Tanzania and population levels outside the parks are now low.

Spangled Emperor have a typical emperor body shape with a slightly humped back which curves down towards the jaw which is in line with the lower part of the body. In good light the lower body is a silver color and the upper part of the body and face is a bronze gold colour. The  body and face are covered in unconnected lines of blue marks which are more prominent on the upper body, making them quite an attractive fish underwater. The fins are translucent with a blue tint. The largest specimens we have seen have been around 45 cm and these in the Marine Park on Mafia Island. They do however grow up to 87 cm. 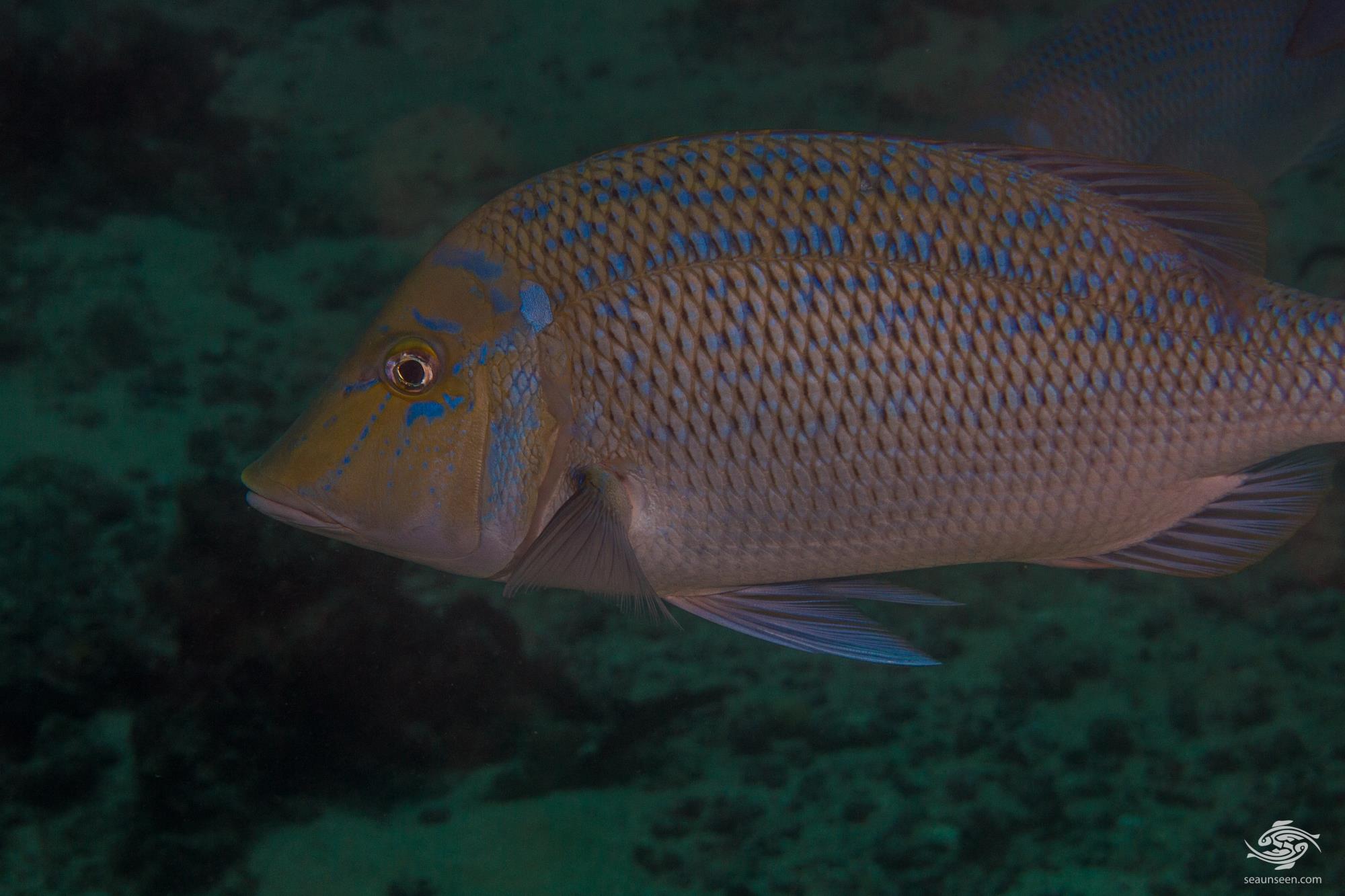 SPANGLED EMPEROR IN THE WILD

The Spangled Emperor is generally always seen solitary or on occasion in small groups of four to five fishes on the edges of reefs and in sandy rubble areas. 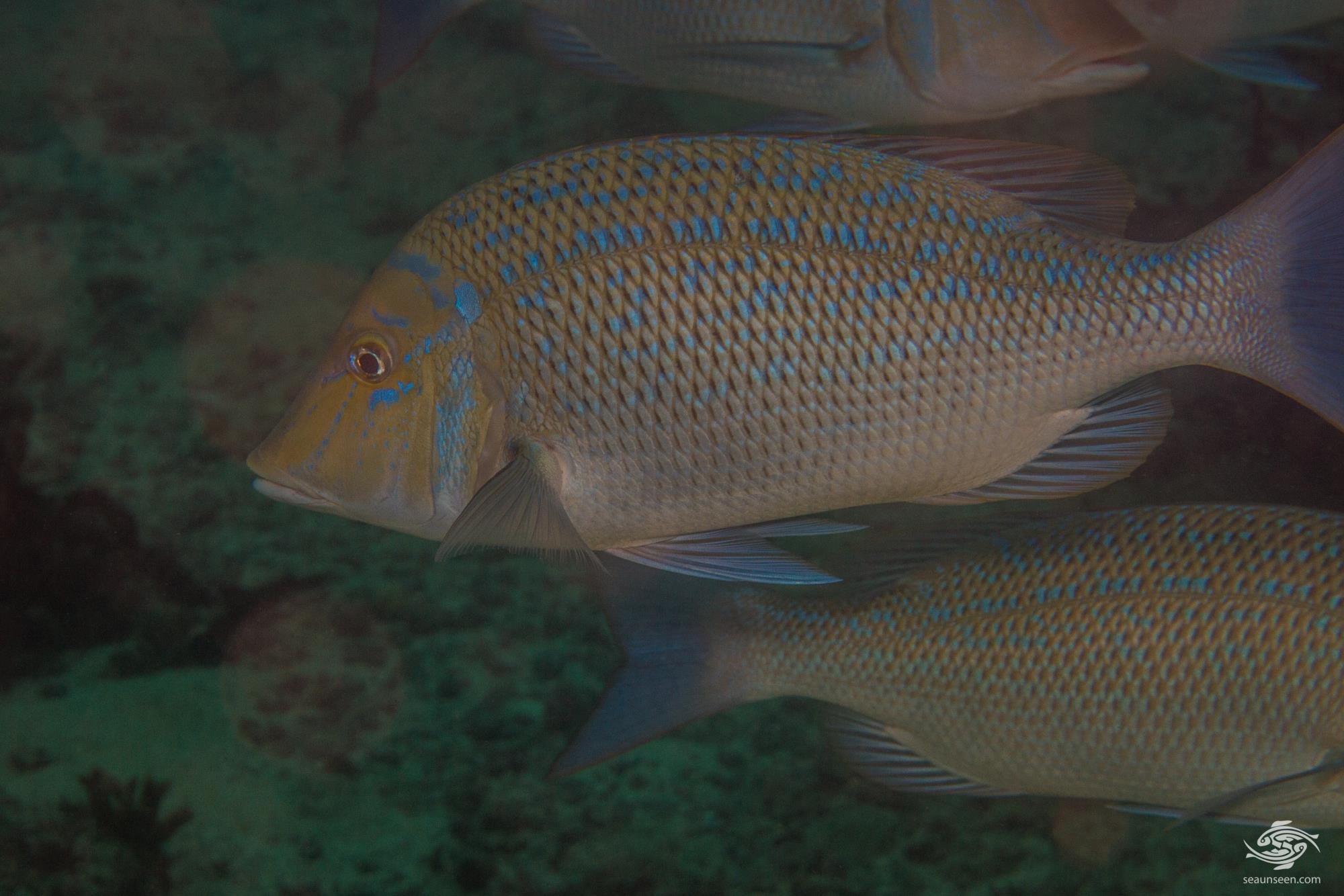 Spangled Emperor are widely distributed across the tropical Indo-Pacific, from East Africa up to the Red Sea across to Southern Japan and down to North Eastern Australia.  We have seen them  on reef sides and on rubble areas down to depths of approximately 20 meters although they are found deeper down to 75 meters. 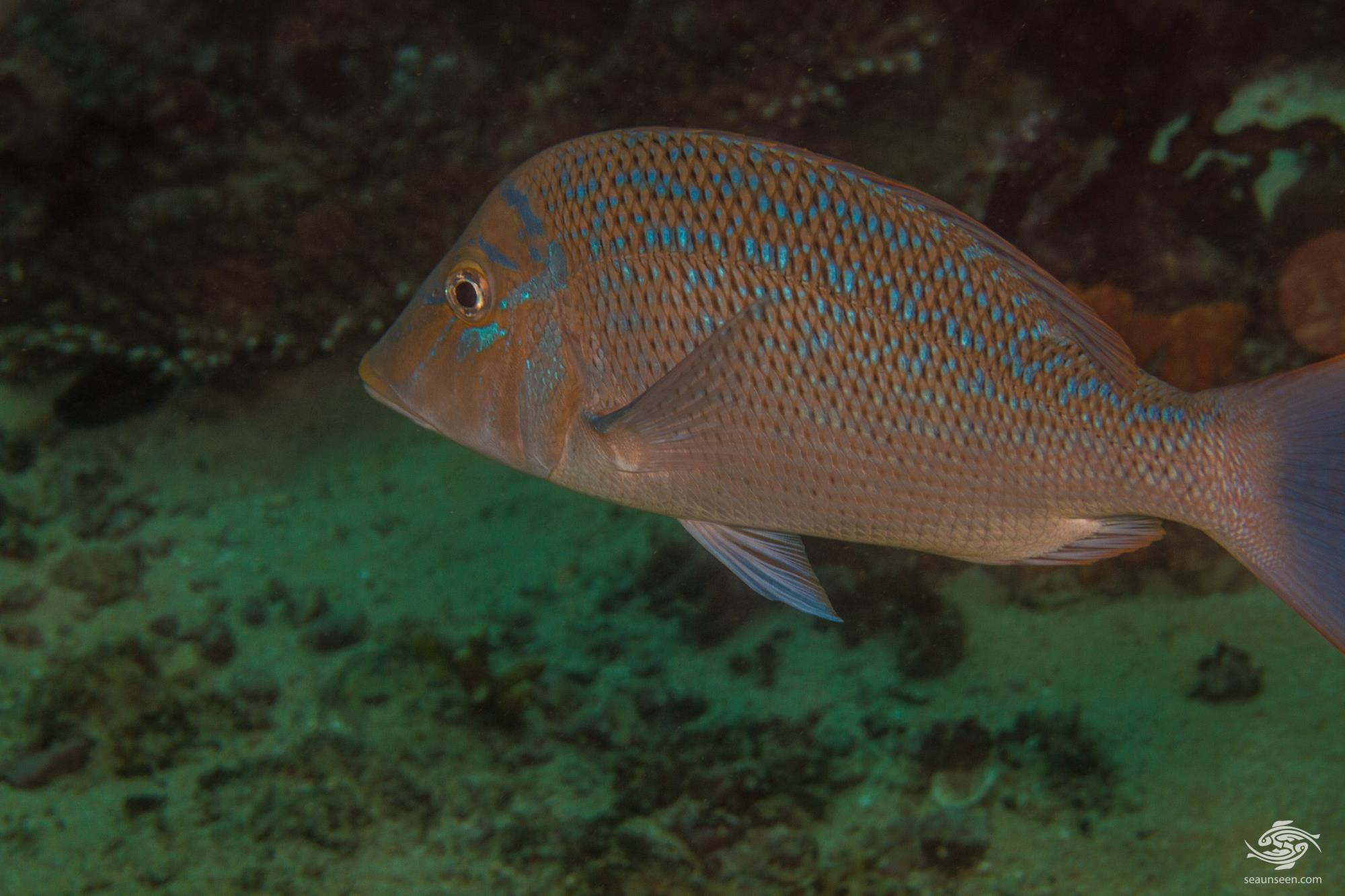 Spangled Emperor have a varied diet, feeding on mainly on crustaceans, mollusks and echinoderms but they will take small fish and polychaetae worms. Their diets vary with maturity and locally available prey items. They have been recorded entering brackish freshwater estuaries. 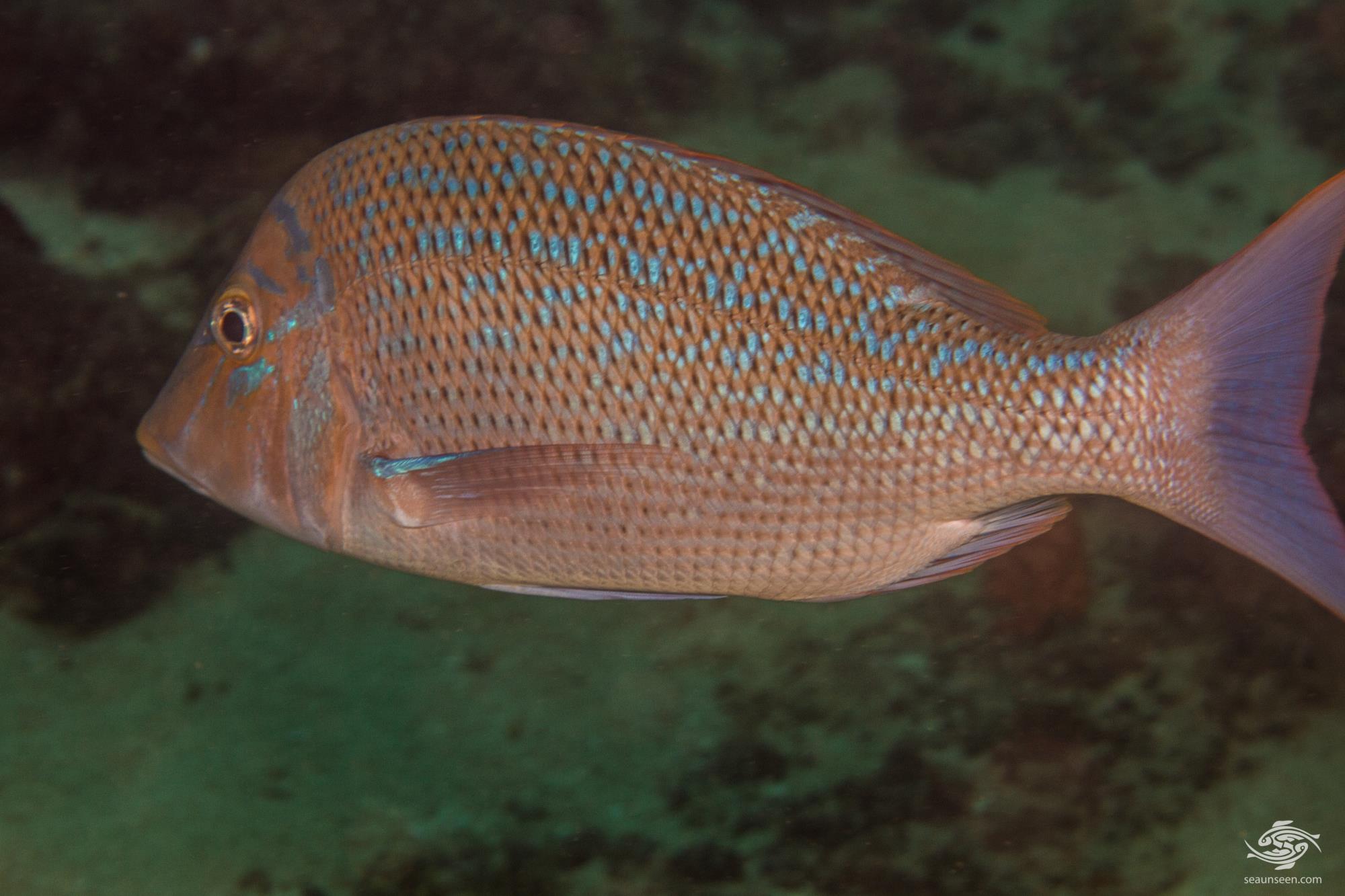 Usually Spangled Emperor are territorial, but they congregate in spesific areas for group spawning on certain tides and moon phases. As local fishermen are generally aware of these spots, overharvesting of the species occurs throughout its range. The eggs are released into the water table. The eggs which are round and transparent float and hatch after roughly 18 hours.

The females are sexually mature at 27.6 cm and males at 28.6 cm which makes them extremely vulnerable to extinction. They have been recorded in the wild at ages of up to 26 years. 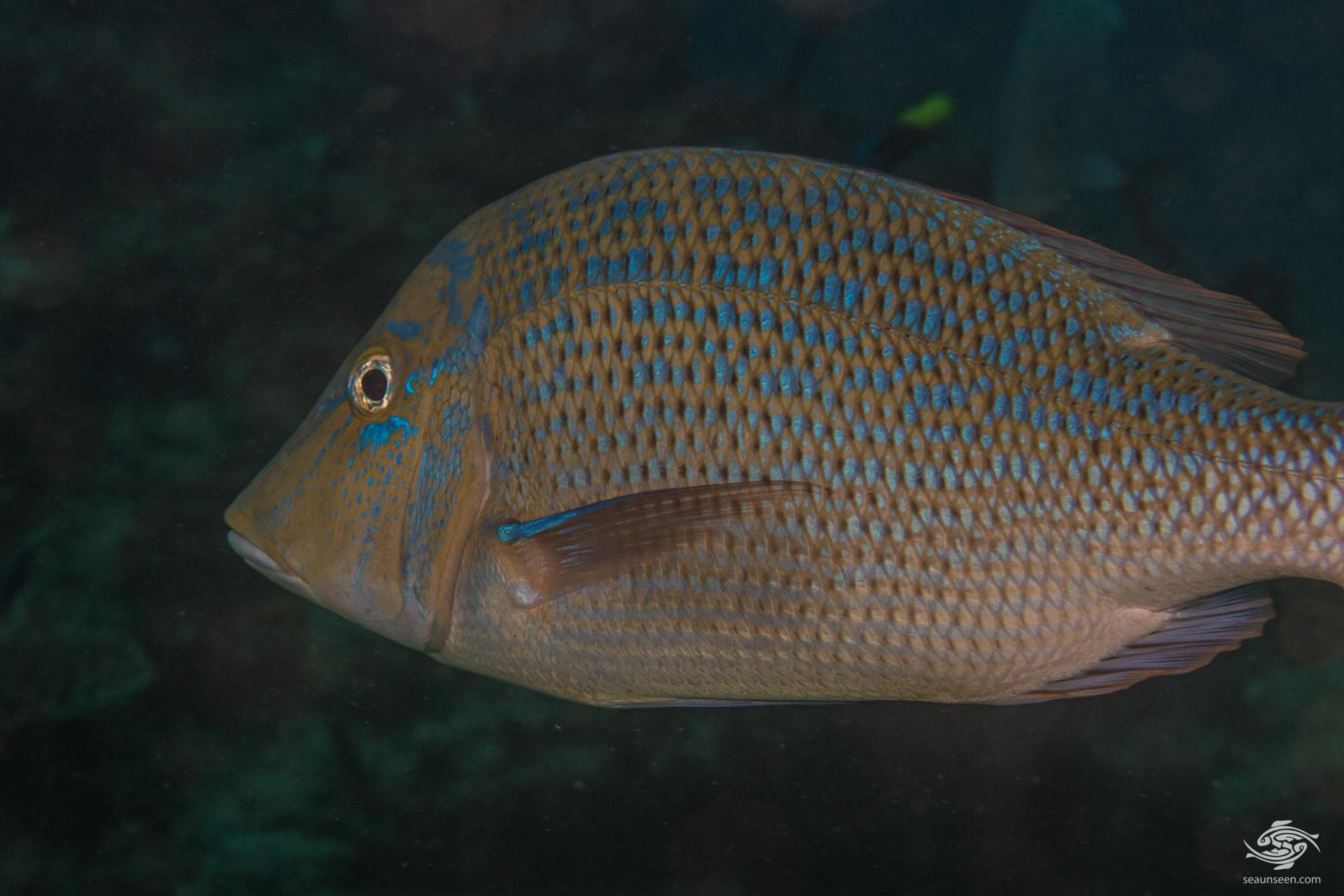 Spangled Emperor are over exploited commercially in most areas particularly in the Gulf area where it is known as Sha’ri,  although a study found they were underexploited in Indian waters.   Another study in Qatar found relatively high levels of mercury in the population in that area ad recommended that only three specimens should be eaten per week, although the levels were within acceptable levels for human consumption.

In Tanzania they are caught by fishermen in traps and on lines and are occasionally netted in the shallows. They are usually sold fresh. Many local fishermen are aware of their spawning times and locations and gill net them. This has a destructive effect on population levels.