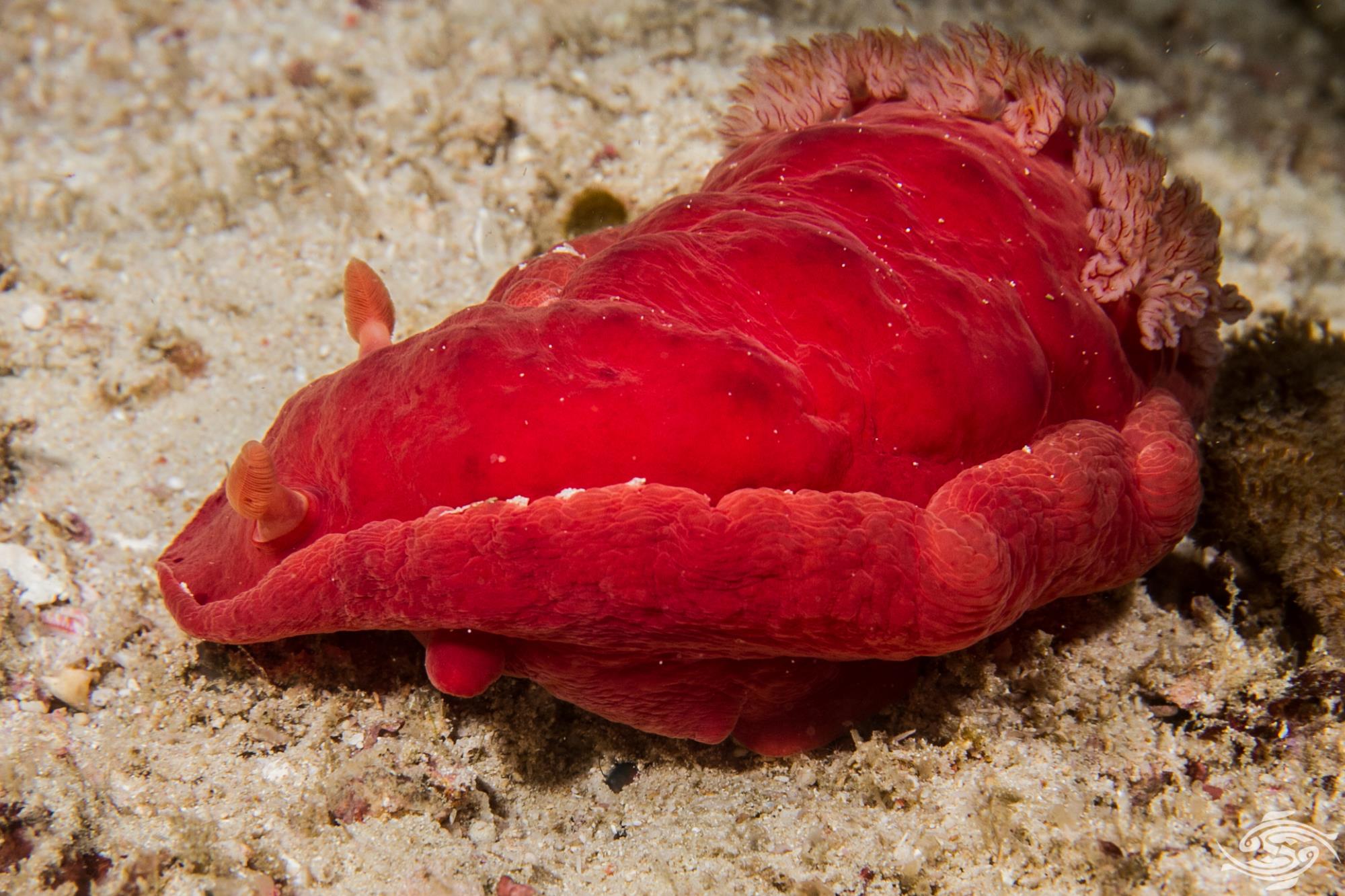 The Spanish Dancer Hexabranchus sanguineus is a dorid nudibranch, a marine gastropod mollusk. They obtain their common name from their resemblance when swimming, to the skirts of a Spanish Flamenco Dancer. Their scientific name means six blood coloured gills.

The name Nudibranch , pronounced ” nudibrank” literally means naked gills and the respiratory organs or gills can be seen on the rear of  the Spanish Dancer. Some species of nudibranch have pouches into which they can withdraw their gills but the Spanish Dancer cannot withdraw its gills. 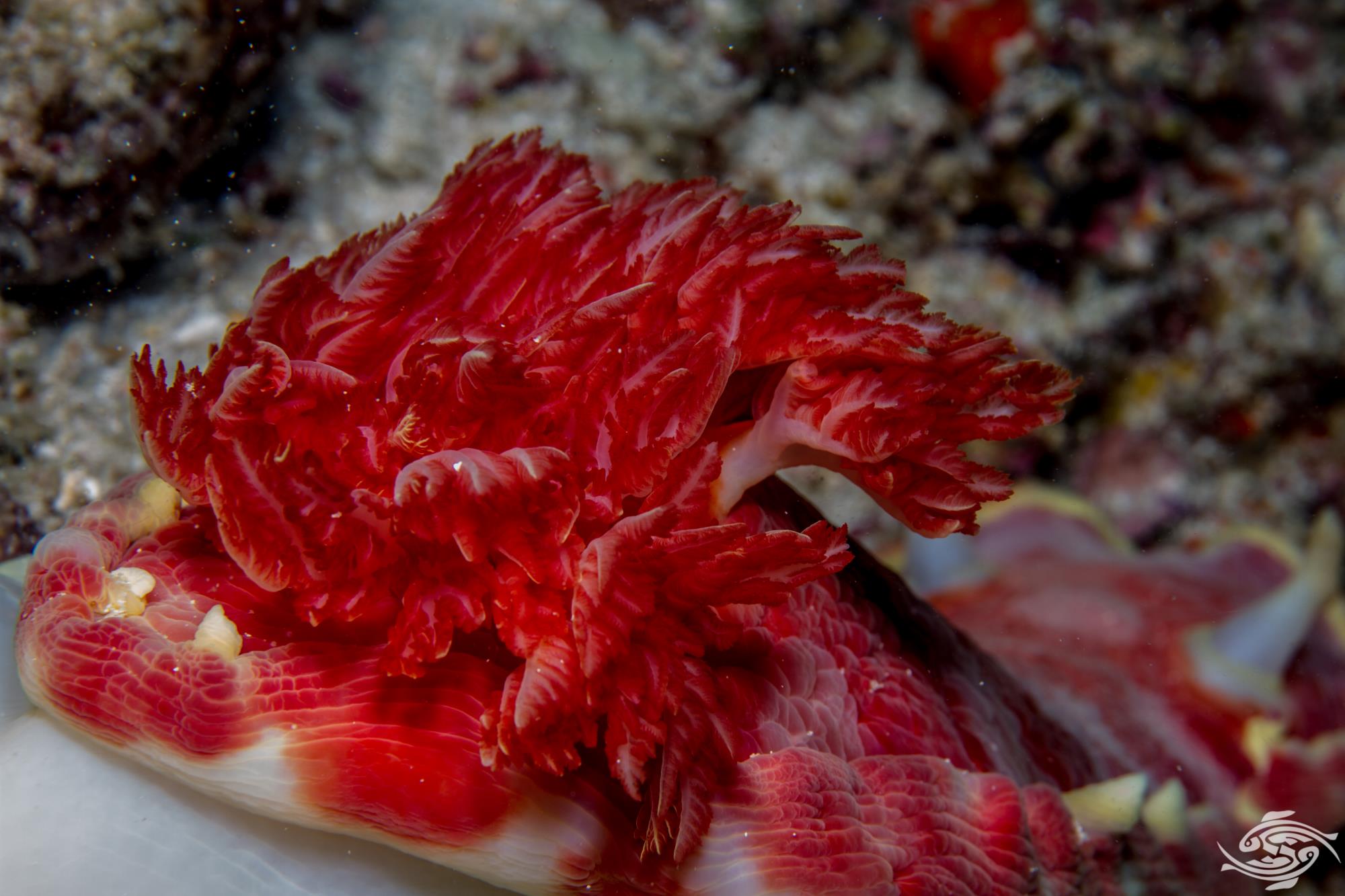 Spanish Dancer’s have an elongated oval shape. The colour varies greatly from a bright red to an orange with red spots. In between are red mottled with white and on occasion red mottled with an orange or yellow background colour. Often there are white marks on the upper surface of the mantle but these are only visible once the mantle is flared out. 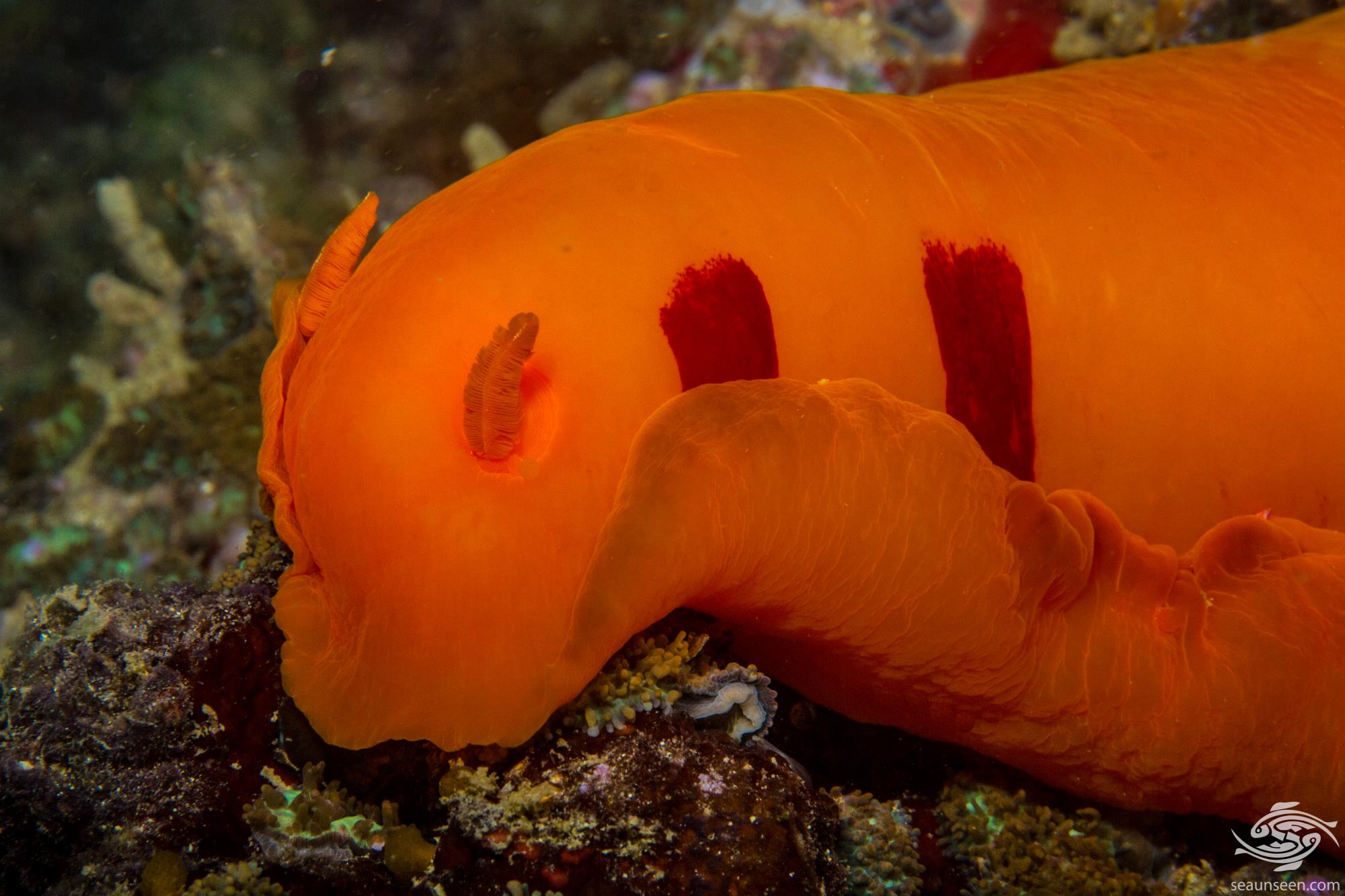 The rhinopores which are the protruberences on the front of the body and the gills usually match the main background colour but there are exceptions as can be seen in the image below.

The rhinopores are sensory organs that are comprised of a main stalk with numerous semi circular plates on either side.  This maximizes the surface area. Chemical sensors on the plates are able to detect minute traces of chemicals dissolved in seawater and are used to locate food sources and possibly other nudibranchs. 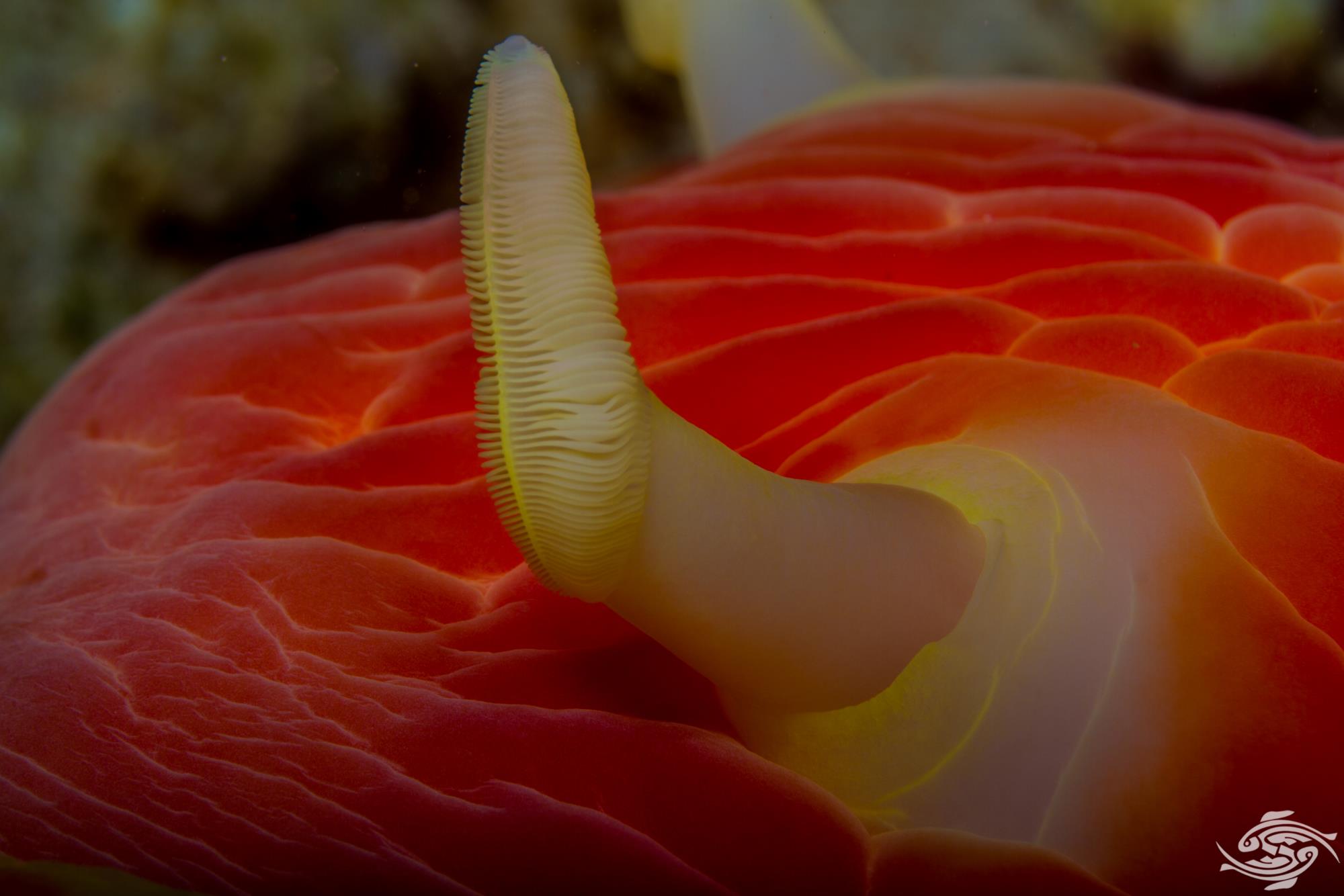 Spanish Dancers can grow up to 60 centimetres in length making them the largest known nudibranch, but they are usually smaller around 30 to 40 cm. The specimens in the images are all around 35 centimeters in length. When crawling along the bottom the mantle is folded back inwards towards the body. When they are uncomfortable they fold the mantle out and have the ability to swim by undulating the body. This is quite a sight to see and can be seen in the video below. See if you can spot the Emperor  Shrimp on the Spanish Dancer towards the end of the video. Note the white markings on the upper surface of the mantle that are not normally visible.

Some people believe that the Spanish Dancer’s are the only species of Nudibranch to swim, however this is not correct and nudibranchs such as the Bornella anguilla are also very good swimmers as can be seen in our post.

SPANISH DANCER IN THE WILD

The Spanish Dancer is a nocturnal feeder and is usually only seen out at night but on rare occasions they can be seen during the day, usually in a dark crevice. On the odd occasion though they are seen out in the open during the day. When lit up at night they usually head for the shadows and must have some light sensing ability.

The prominent rhinopores on the front of the Spanish Dancer are used to detect chemical scents in the water. These allow them to track down food sources and possibly may assist in finding others to mate with. The Spanish Dancer absorbs toxins from the sponges that it eats and the bright colours are a warning to potential predators that they are poisonous. They also have the ability to secrete toxic substances into the water which provides further protection against predators.

The Spanish Dancer is found across the tropical and sub tropical Indian ocean and in the west Pacific,from Africa to Hawaii and Australia to Japan. 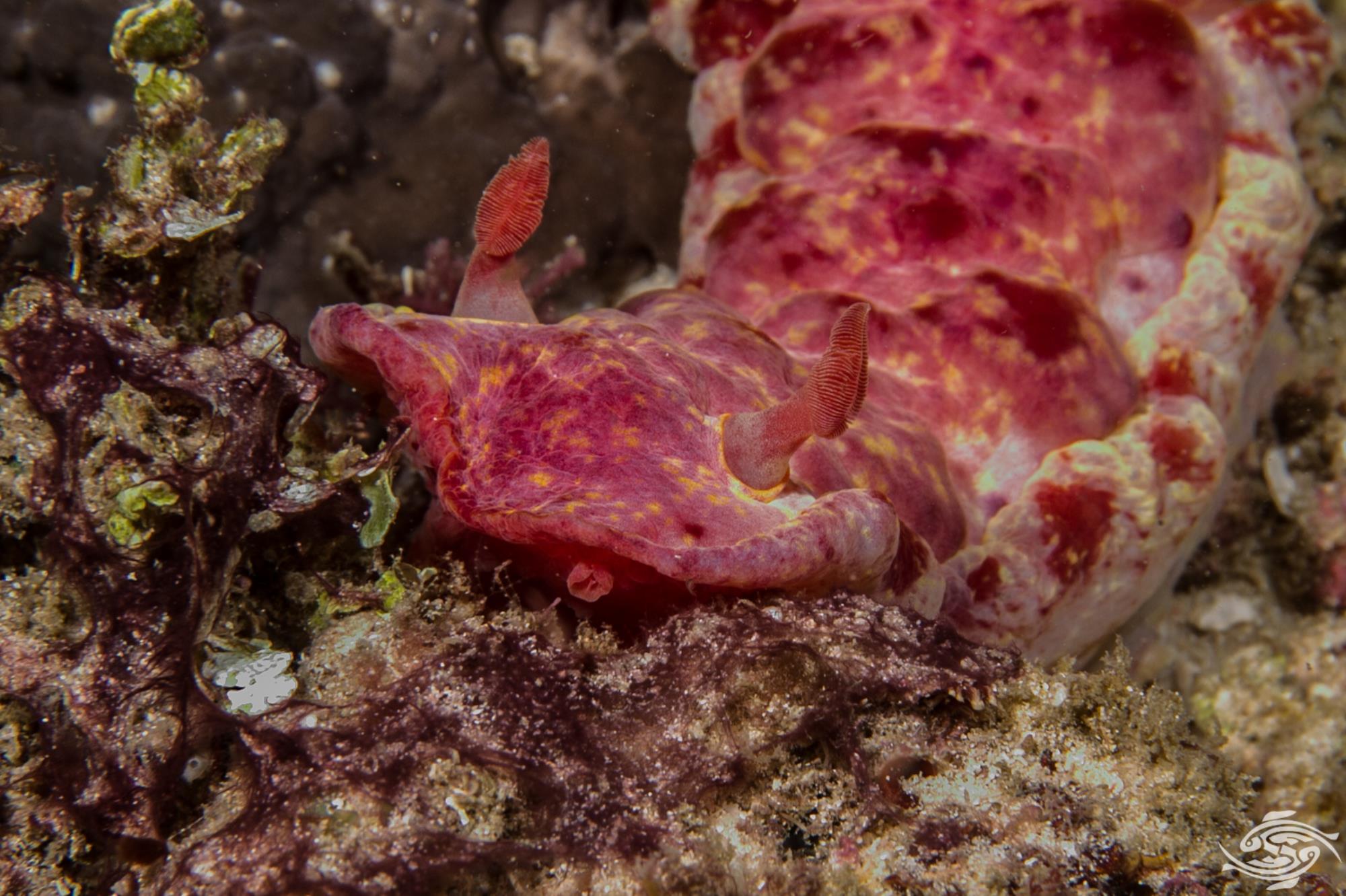 The Spanish Dancer’s are nocturnal feeders. They feed mainly on sponges and absorb toxins from the sponges which provide protection against predators. The Rhinopores which are the feather like appendages on the anterior portion of the body are sensory organs that detect chemical traces in the water. Much as our sense of smell would lead us to food, so the rhinopores  detect minute trace elements released by their favorite foods. This allows them to home in on food sources in the dark. 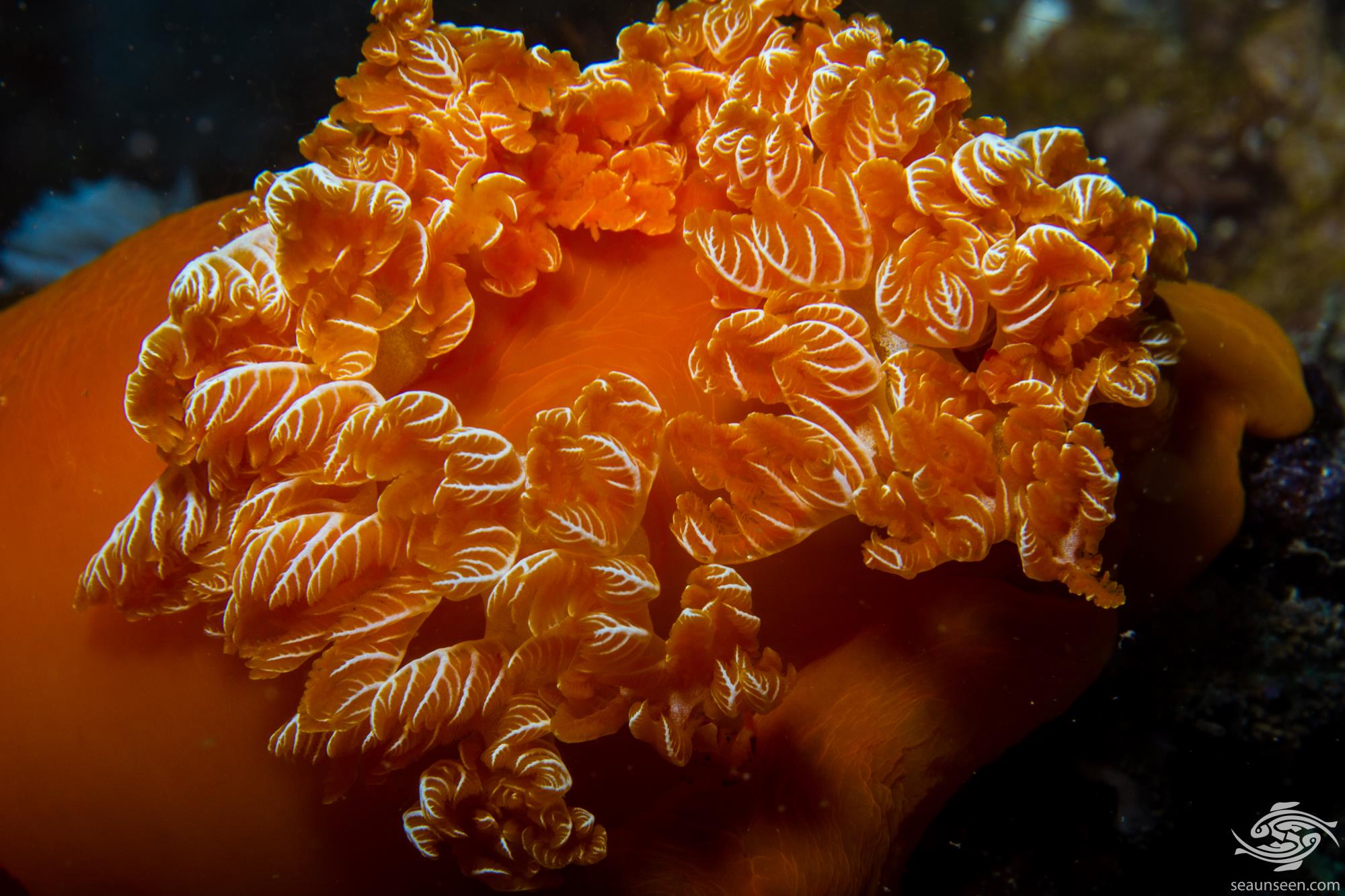 They are simultaneous hermaphrodites which gives the species the advantage that any mature specimen may mate with any other mature specimen. The reproductive organs are on the right side of the body. Mating takes place with each specimen facing its right side to the other in a head to tail position.  Eggs are laid on a solid substrate in the form of a long ribbon, which is curled in a rose like fashion as can be seen in the image below.

The egg ribbons contain powerful toxins and are brightly colored which deters predators from eating them. This allows the egg ribbons to be laid on a prominent spot on the reef. Usually they are on top of a rock or piece of dead coral. Being able to lay the eggs out in the open allows the eggs to be naturally aerated by water movement. As they age the egg ribbons tend to become more of a dark red brown colour. When the eggs hatch the larvae become planktonic before growing into adults. 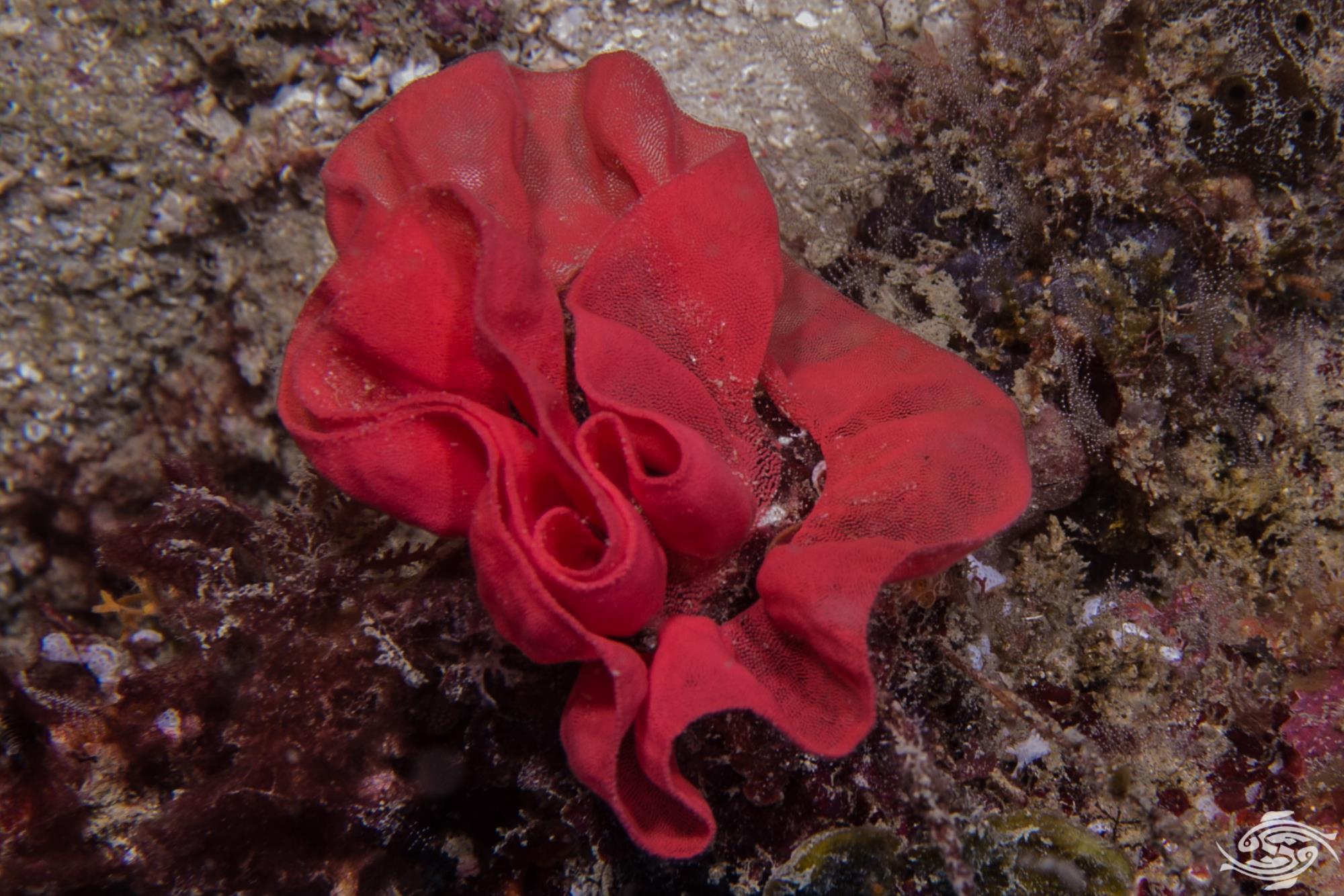 The Emperor shrimp, Periclimenes imperator is commonly found living on the Spanish dancer. Often they will hide under the mantle when they see a diver approaching. Sometimes there is more than one on a specimen. If you look carefully at the image below there is one on the nose and one near the gills. 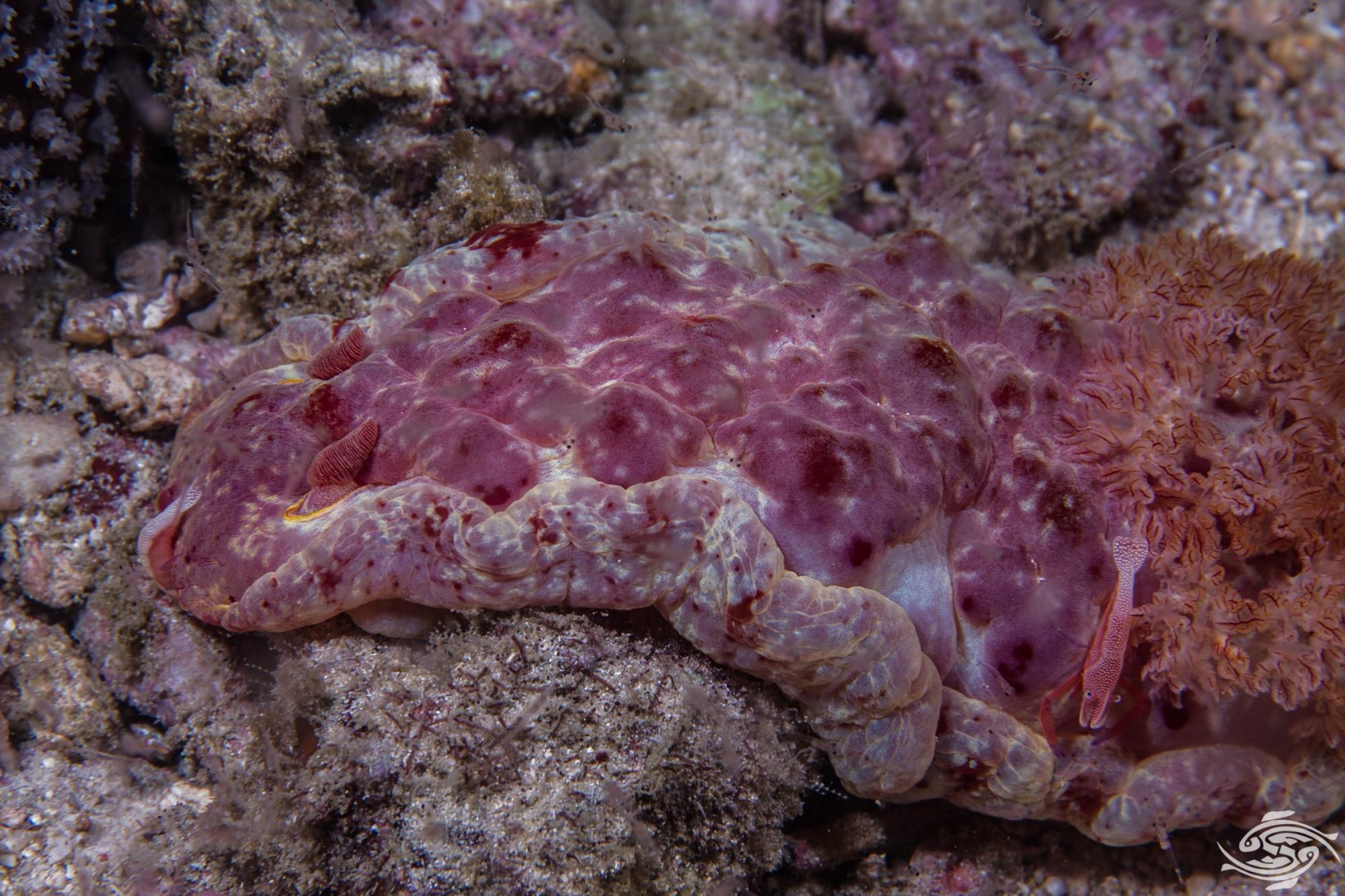 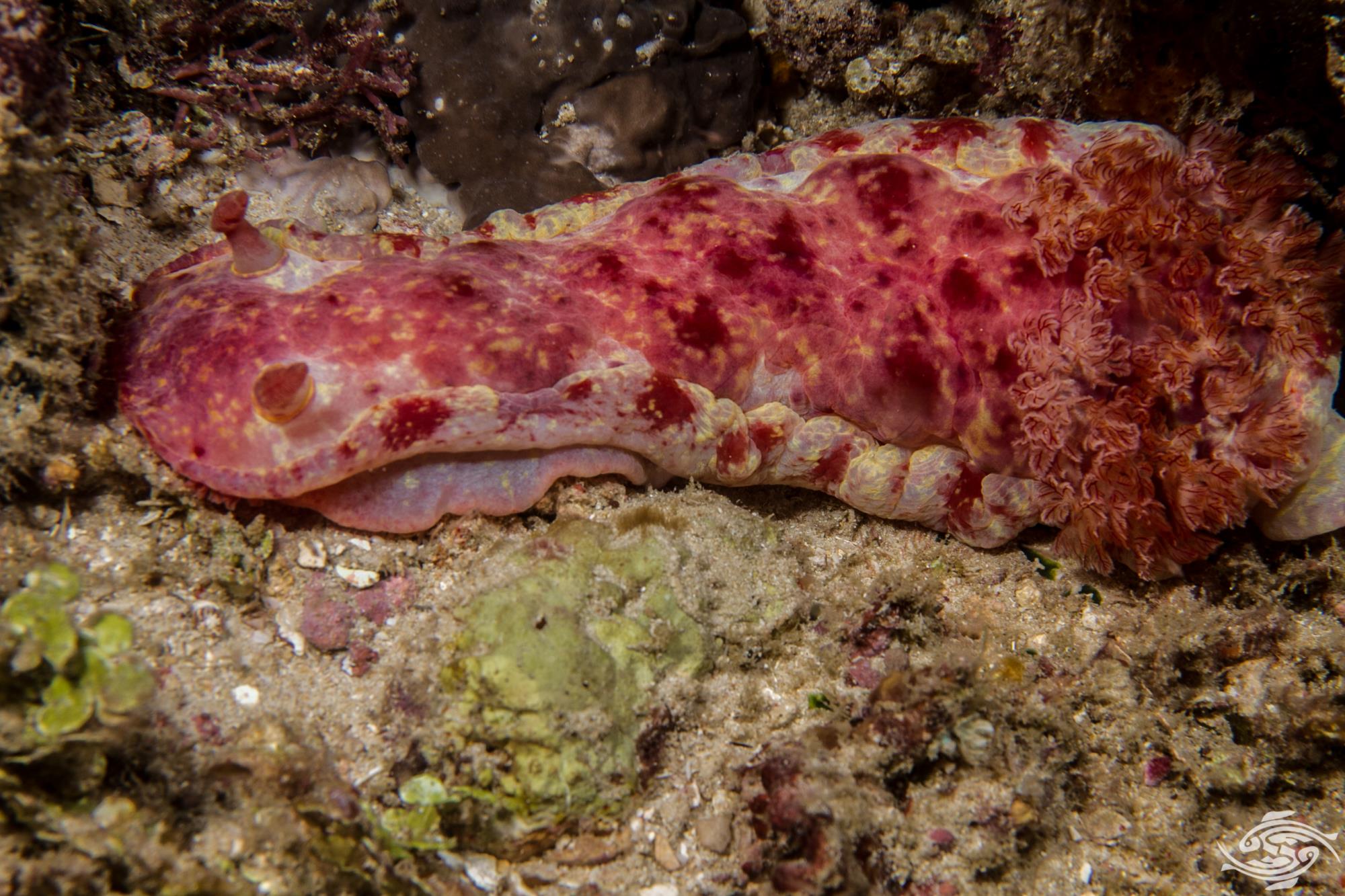 Because of their highly specialized diet of specific species of sponges, Spanish Dancers are not generally kept in aquariums. Although they are put out for sale and are purchased by some aquarists it is almost a certainty that they will die quickly in an aquarium. The odds of being able to provide them with the correct species of live sponges to feed on are close to zero. There is a very good article here which explains why one should not attempt to keep them or any other nudibranch in an aquarium. They are best left in nature and to purchase them is irresponsible.

SEE OUR OTHER POSTS ON NUDIBRANCHS HERE 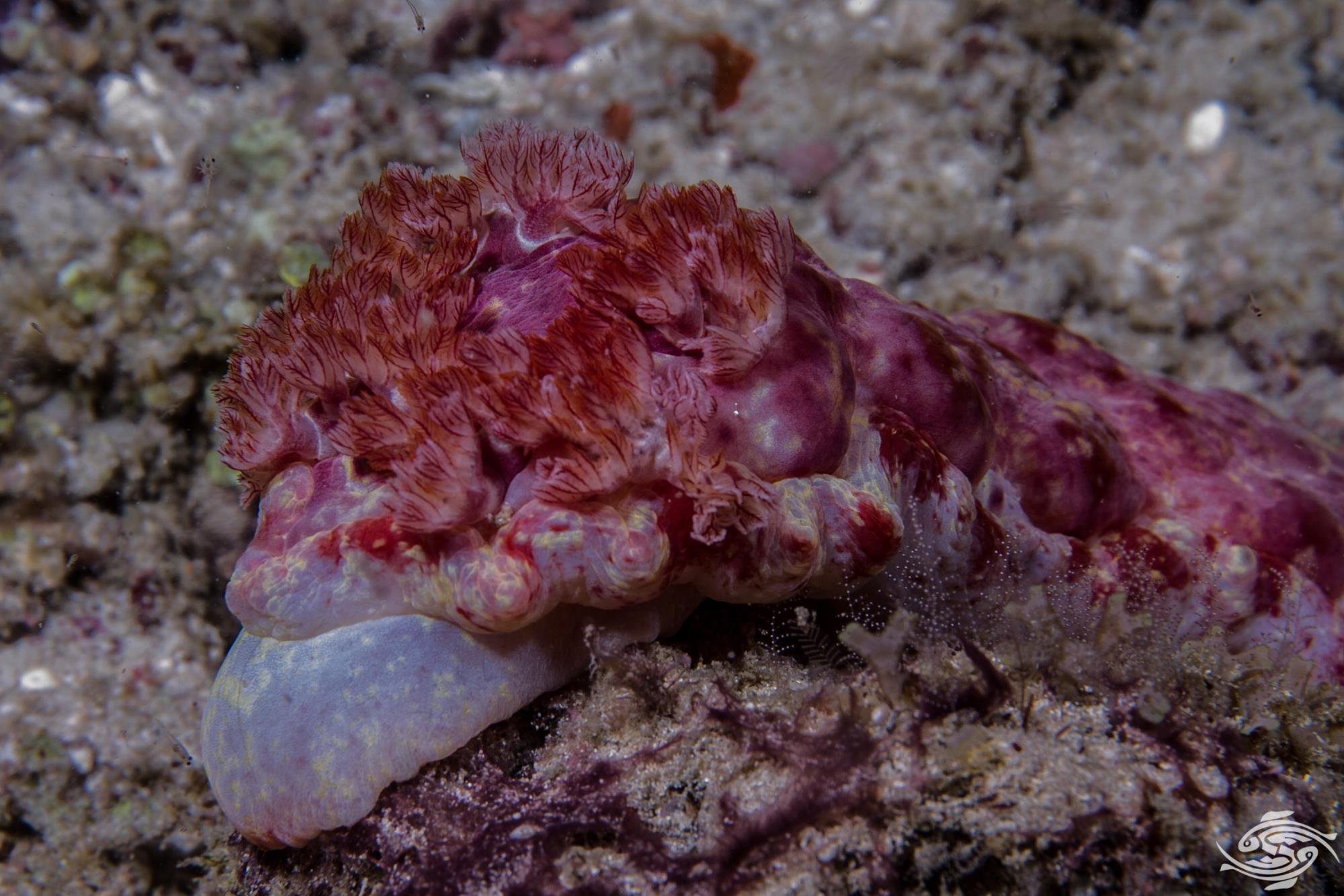 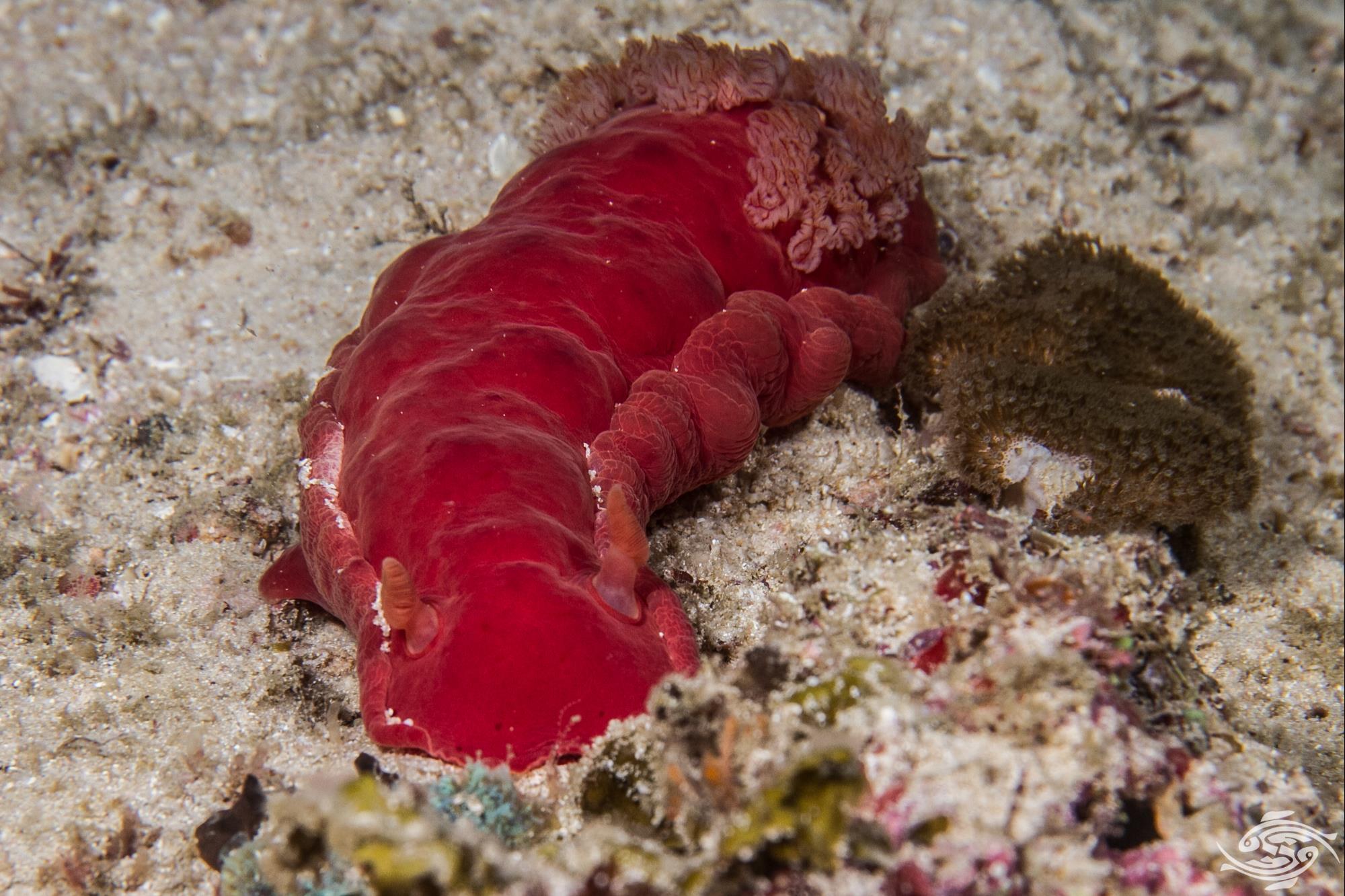