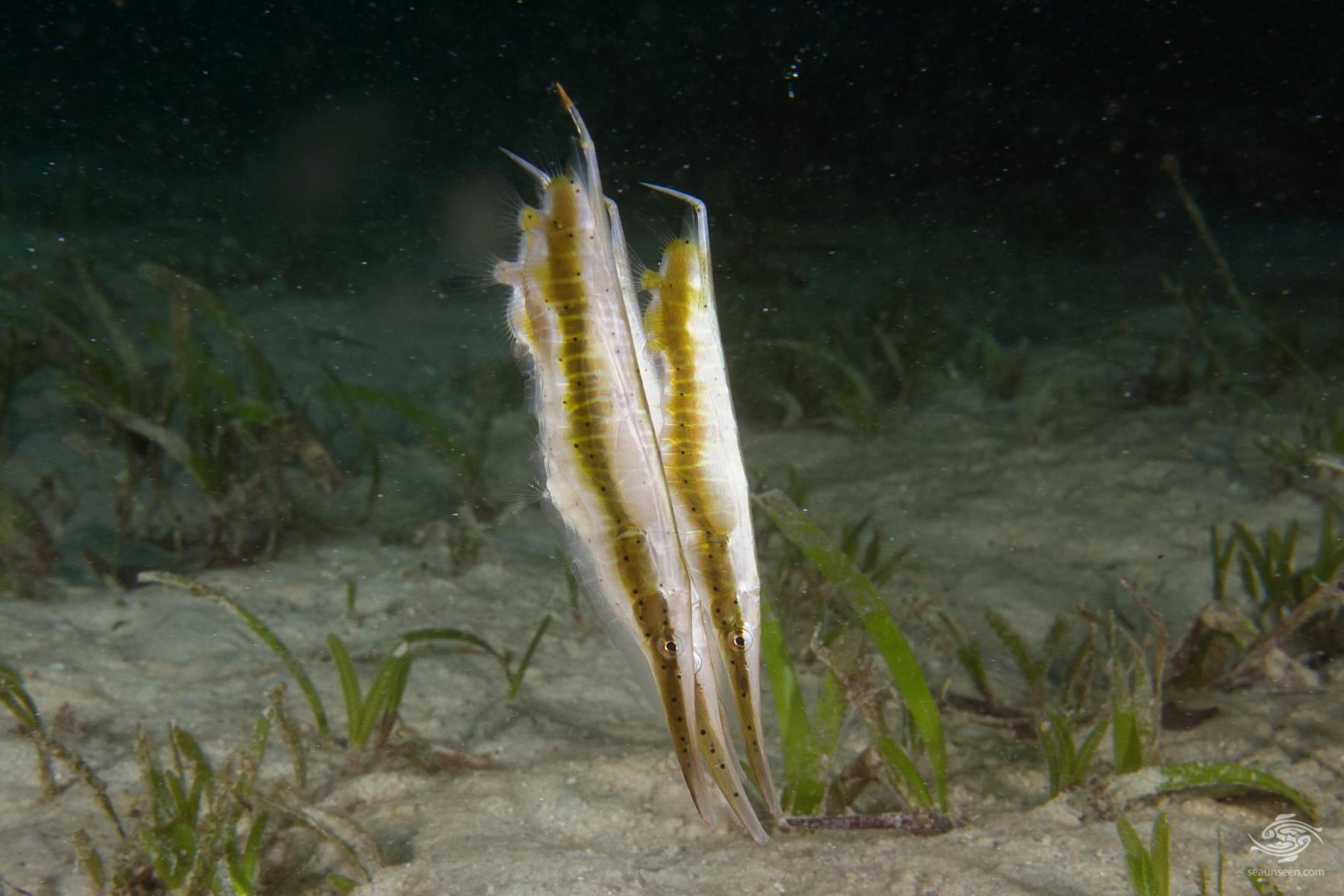 The Speckled shrimpfish (Aeoliscus punctulatus)  also known as the  Razorfish is related to the Seahorses and Pipefishes. They have a distinctive way of swimming with their heads in a downwards position. Despite the strange swimming motion they can travel at quite high speeds over short distances and do their high speed swimming semi horizontally.

Because of their swimming style they are quite unmistakable, there is no other fish that swims in this fashion. Parts of the body are transparent giving them a shrimp like appearance. The body is narrow with a sharp edge hence the name razor fish and is covered in bony plates. The caudal or tail fin is angled at almost right angles to the body which is rigid. Their fins are the sole means of propulsion and as the body is rigid.

They have a spike sticking out the back of the body that can be directionally adjusted. If one can get close enough to them , a non transparent green-brown colored section of the body can be seen through the transparent section. The darker part of the body has small spots on it hence the name. The mouth is narrow and tube like and curves downwards. They grow to a length of 15 cm but are generally around 10 cm long. 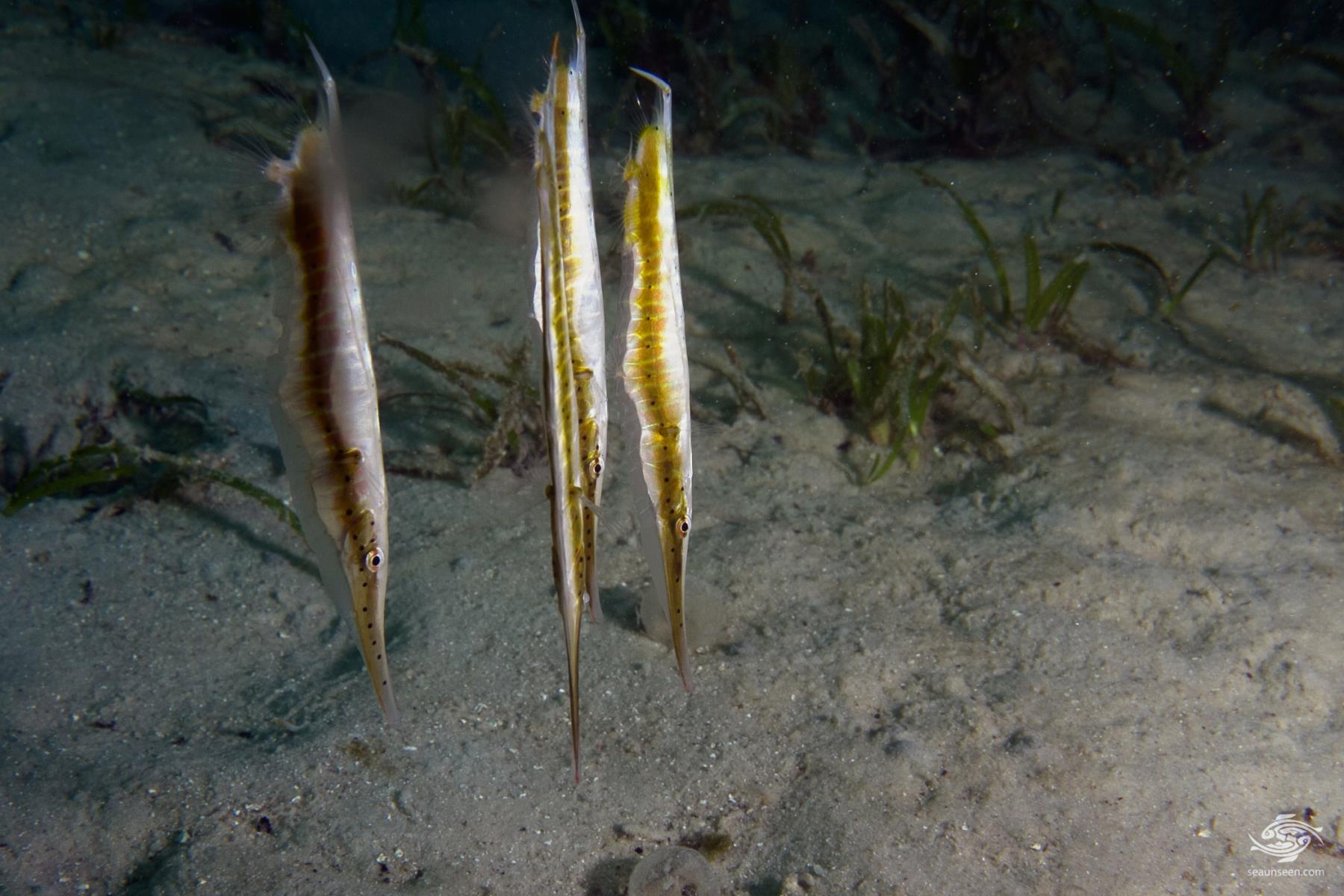 They are generally seen in groups, sometimes of twenty or thirty, swimming together in a a synchronized fashion. Speckled shrimpfish are extremely cautious of divers  and are quick to swim away and hide if one approaches them. They are quite alert and are really hard to get really close to.

They are found up the east coast of Africa from Algoa bay northwards, in Madagascar, up to the Red sea and Persian gulf across to the Seychelles and Maldive Islands.

Speckled shrimpfish are generally seen in shallow coastal waters on intertidal sandy flats and over beds of sea grass and reefs to a depth of 40 meters. Usually they are seen in the shallow waters and will hide in the coral or in the spines of long spined sea urchins. 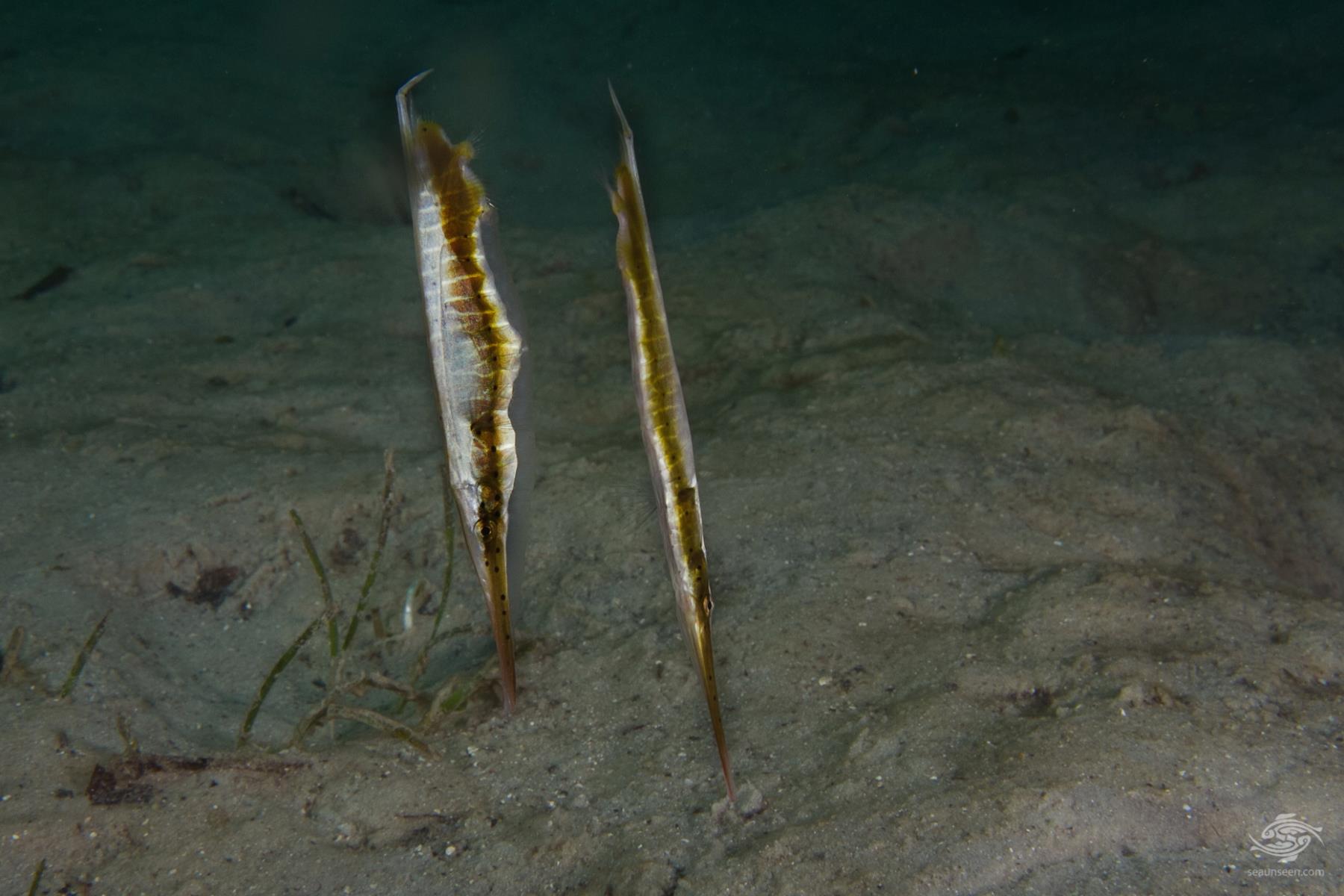 Speckled shrimpfish use their slender toothless mouths to suck up minute copepods, amphipods or similar organisms and feed on zooplankton as well.

Spawning takes place when males and females release eggs and sperm into the water table where fertilization takes place. Once the eggs hatch the juveniles head for protection in the coral or urchin spines. 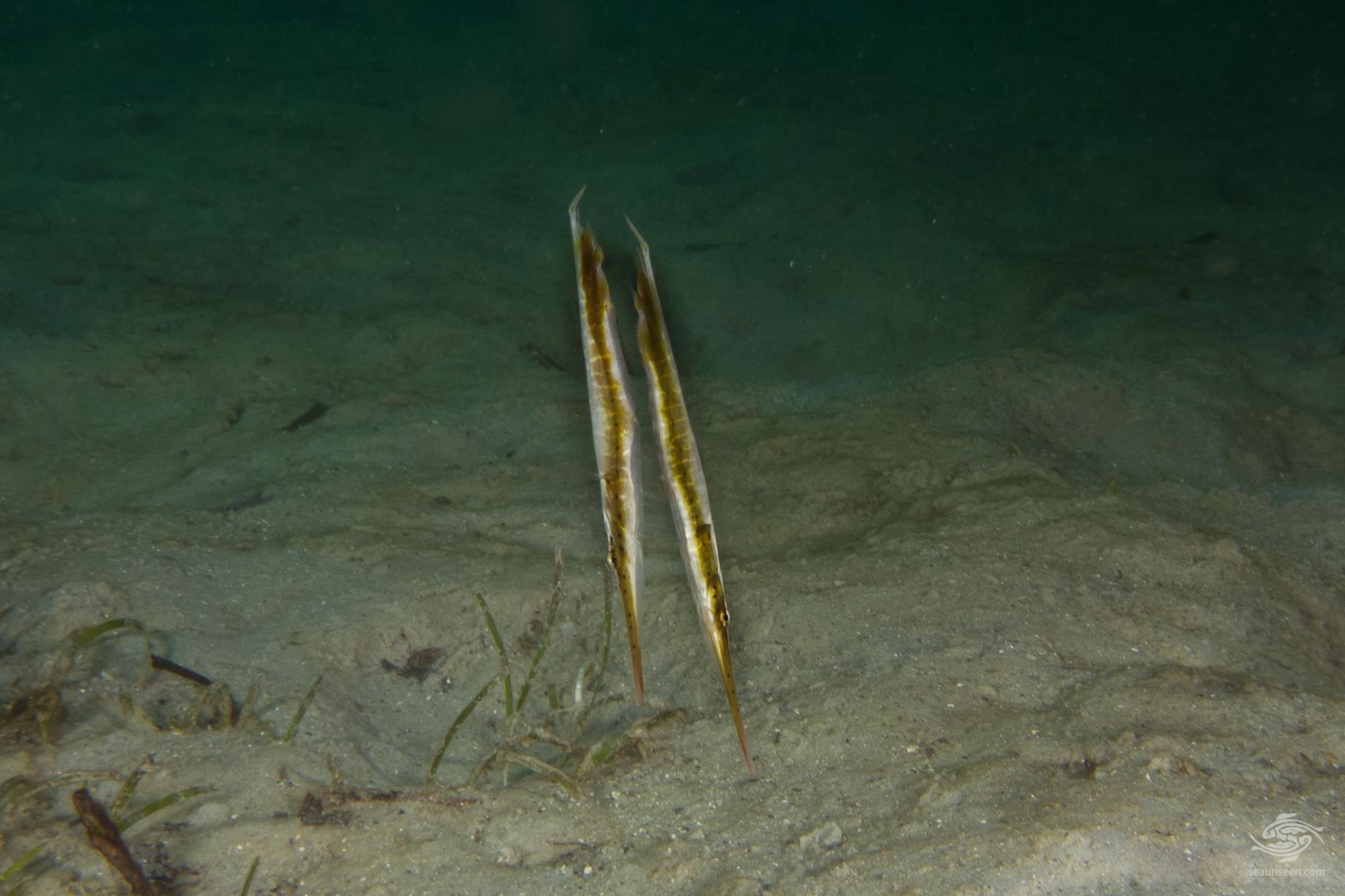 Speckled shrimpfish  seldom if ever accept prepared foods and have to be fed live food. They are most often seen in public aquariums because of the difficulty of feeding them. They need ideally to be fed four times a day with live food.

While it is possible to keep them in an aquarium the daily feeds can be time consuming. They can survive on a diet of vitamin enriched brine shrimp. It is quite an effort to keep them because of this. If kept they are happier in groups of four or five shrimpfishes. A small aquarium with moderate current and an overhang and some hiding spots is probably best. 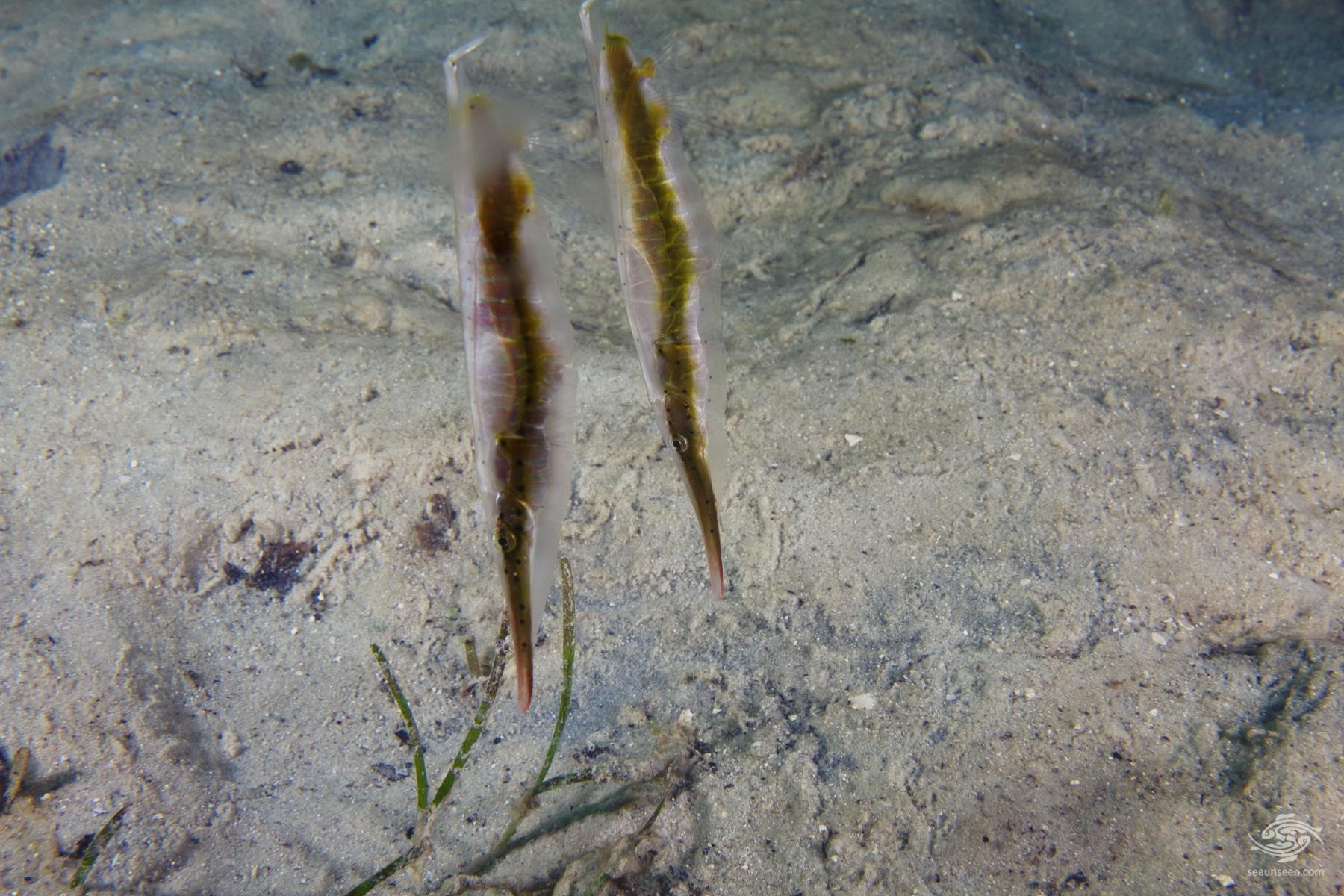