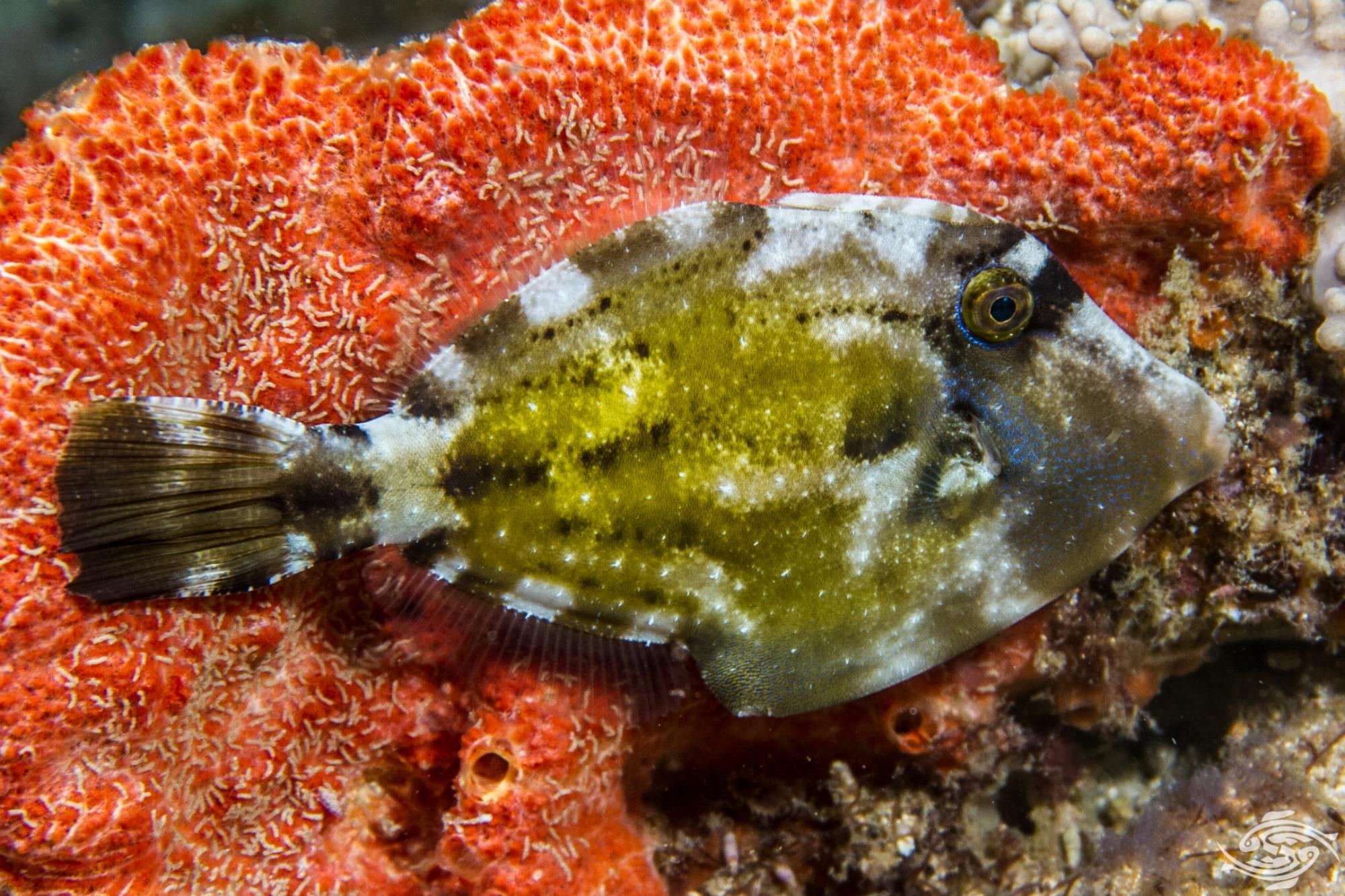 The Spectacled Filefish (Cantherhines fronticinctus) is also known as the Spectacled Leatherjacket.  They are very shy fishes that are difficult to approach closely and hardly ever stray far from shelter.

Filefish, also known as leatherjackets in Australia are closely related to Triggerfish and Pufferfish. Filefish are in the family Monacanthidae meaning one spine. This can be seen in raised position in the image below. Similar to Triggerfish, they have a prominent first dorsal spine which can be raised for defense or wedging themselves into a hole. Filefish obtain their name from their rough non overlapping scales which have small spikes on them. 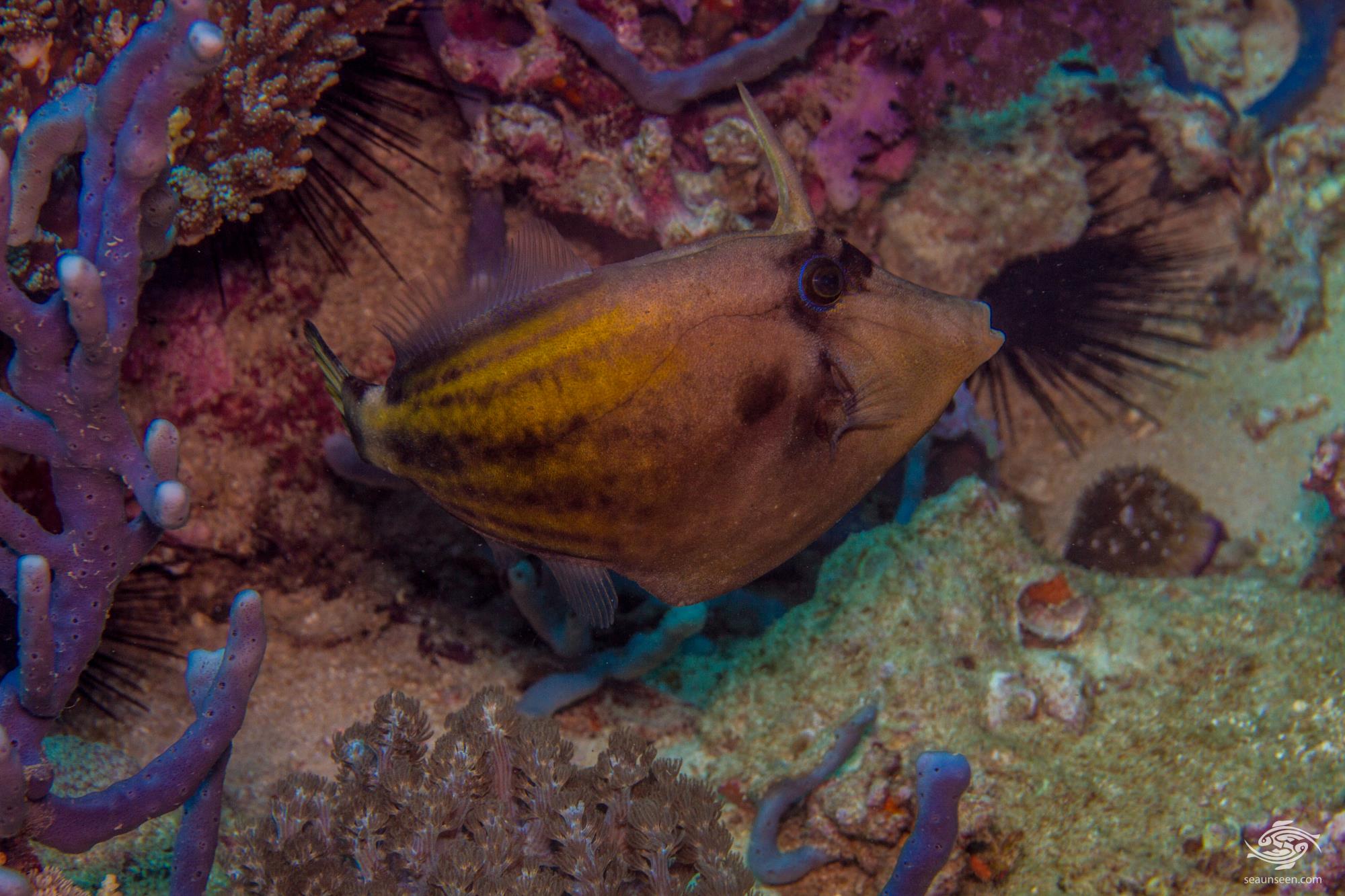 The body of Spectacled Filefish is laterally compressed and the eyes are set high up and away from the mouth. The dorsal fin is divided into two parts, the forward dorsal fin being narrow and elongated and capable of folding back into a groove on the dorsal area.

During the day the body is an overall yellow colour with brown spectacle like markings over the eye which is ringed in blue. There are dark irregular lines across the top of the body  and dark brown smudges across the mid body. The caudal area has a white vertical bar across it and the caudal fin has a dark bar on the beginning and then is yellow with black edges. As can be seen in the images they are capable of darkening the white bar on the caudal area. 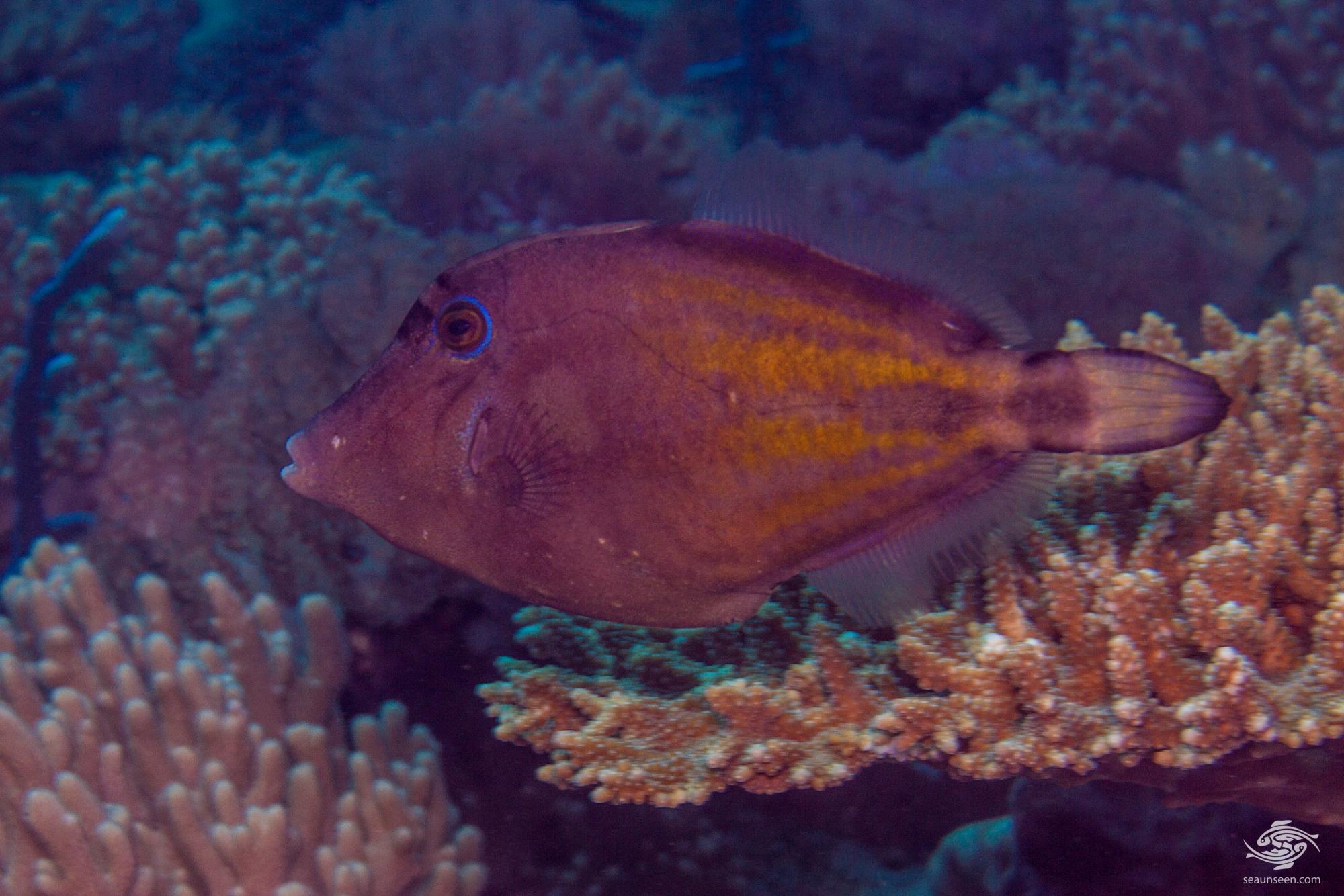 As with most Spectacled Filefish, they are able to vary the intensity of their colouration and at night when hiding the yellow sections go a green colour. Blue dots appear on the gill plate going forward onto the nose and the dorsal fin has white and green patches on it.  They grow up to 25 cm centimeters but are usually between 15 to 18 centimeters in Tanzanian coastal waters. 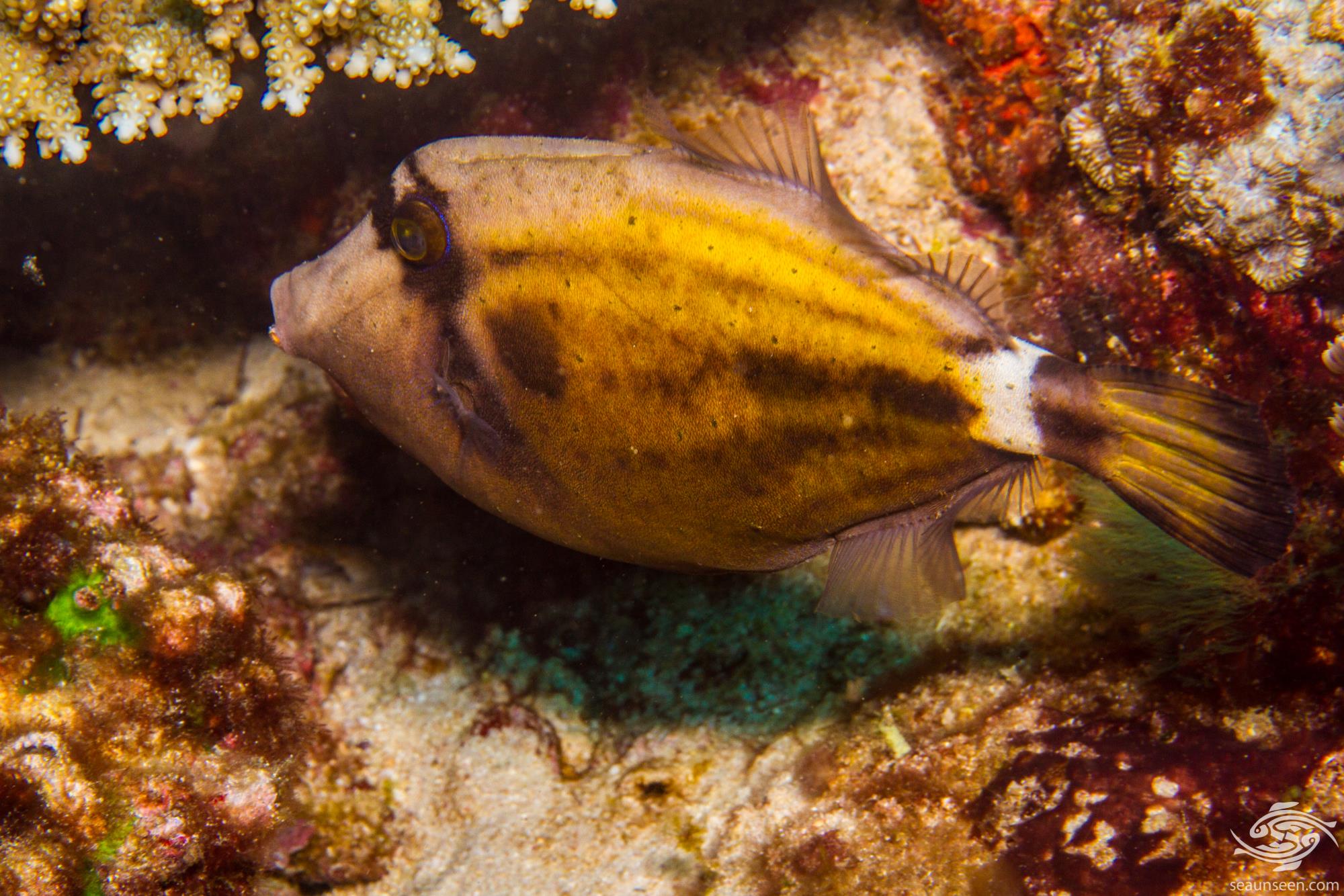 SPECTACLED FILEFISH IN THE WILD

The Spectacled Filefish is a very shy fish and is hard to photograph well because of their cryptic habits. Usually when they sight a diver they go straight into hiding. They will often raise their dorsal fin when they sight a diver. If they want to make a quick getaway the fin is lowered while the fish accelerates off. Spectacled Filefish are usually seen solitary but very occasionally one sees a pair together. 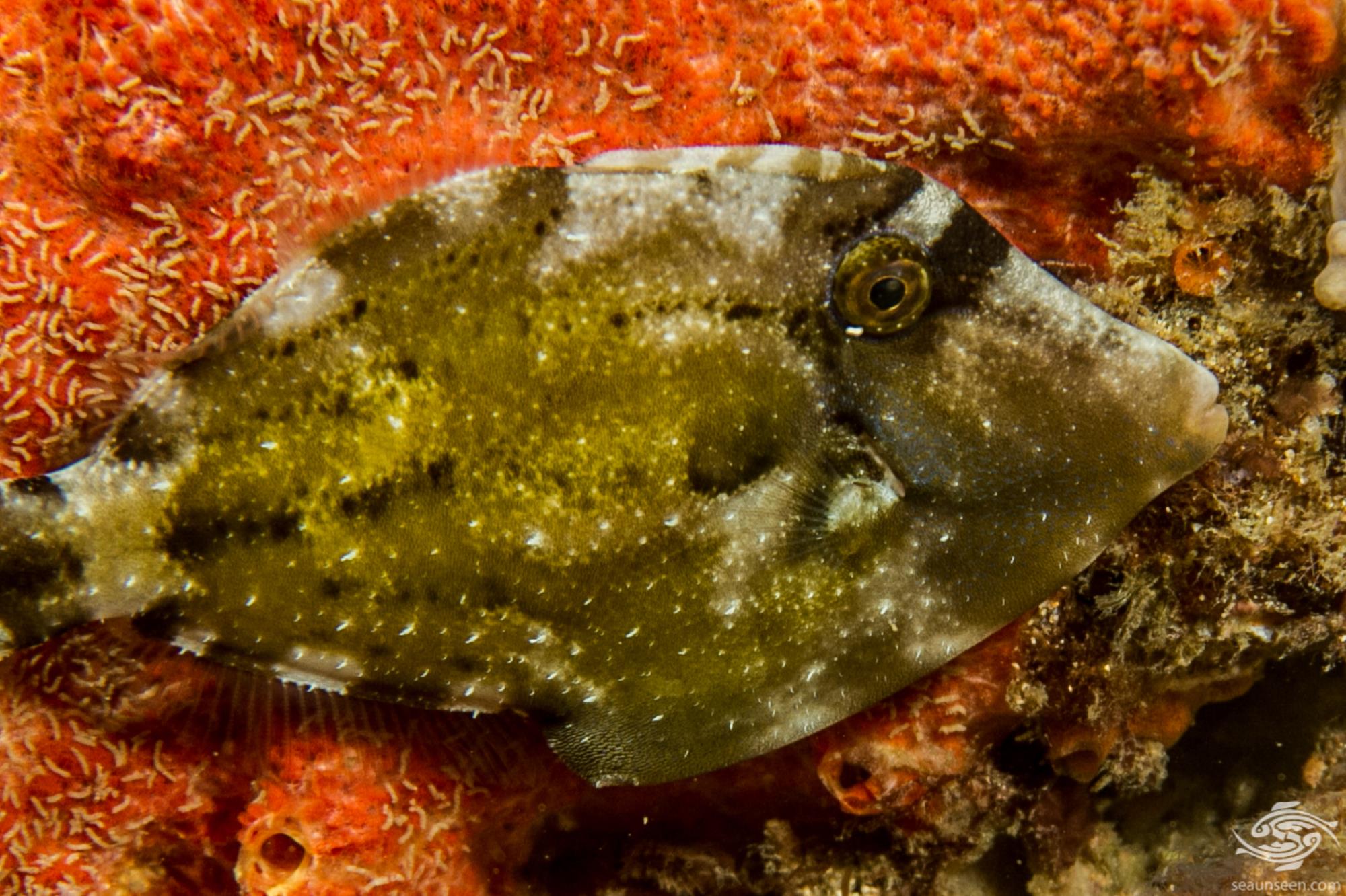 Spectacled Filefish are usually seen on reefs with good coral growth interspersed with rubble. They seem more common in the 5 to 12 meter depth range on reef tops with large amounts of sand and rubble. Their range stretches from the East African Coast across to Southern Japan and down to Australia but excludes the Red Sea, Persian Gulf, India and Thailand . 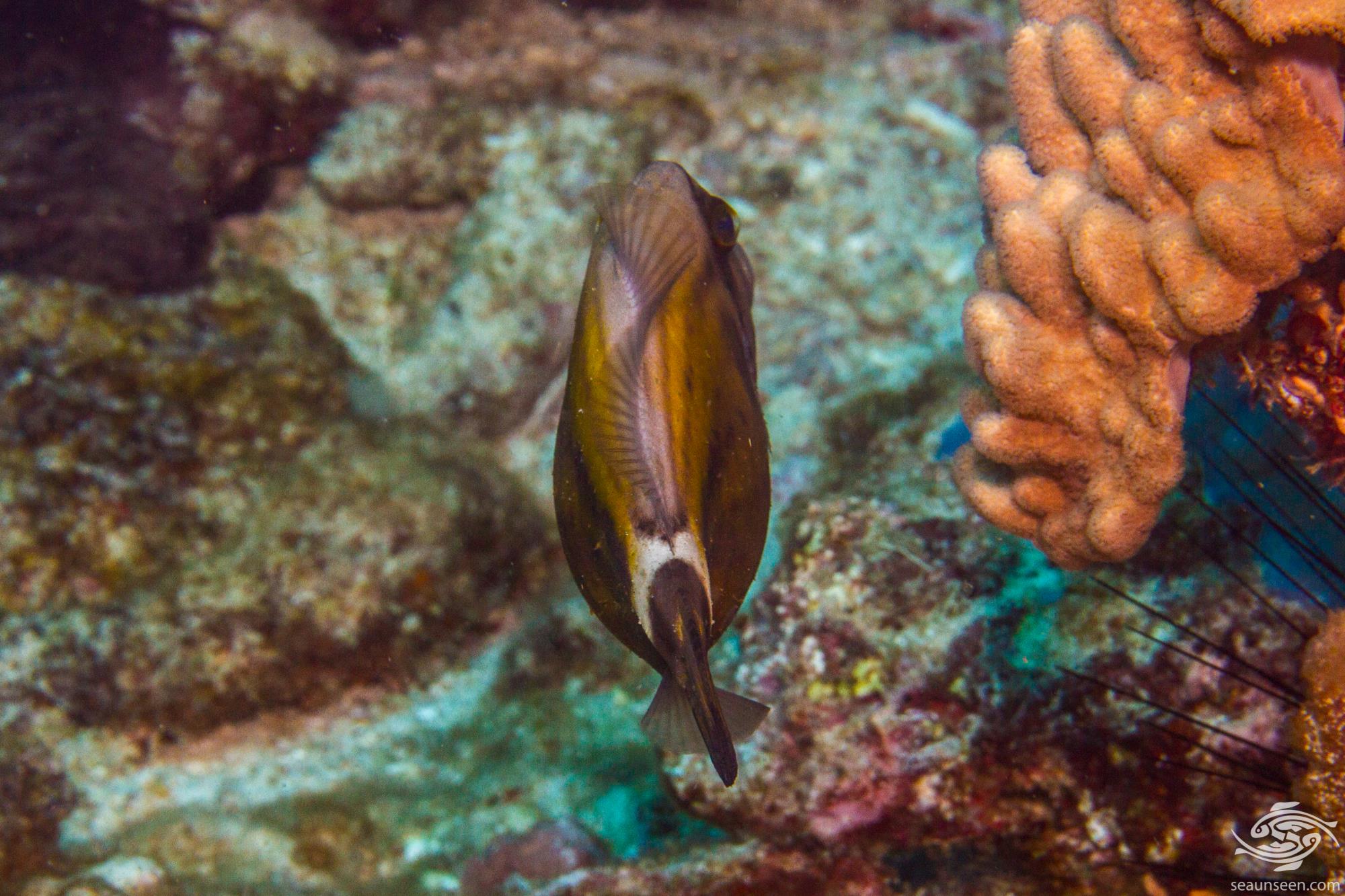 The diet of Spectacled Filefish consists of benthic invertebrates. 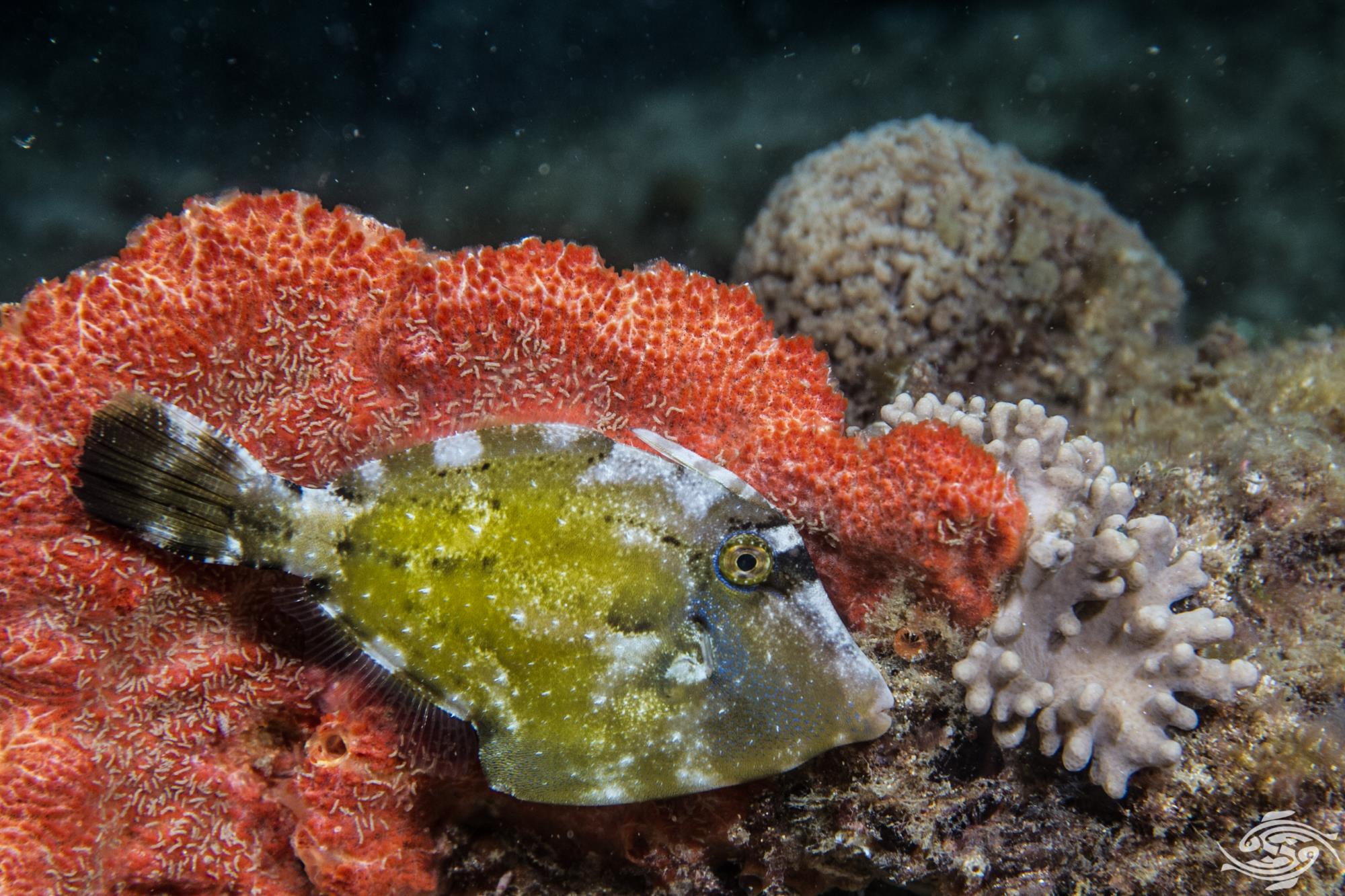 Spectacled Filefish do not seem to have been studied in any detail and very little is known of this reclusive fish.  However they probably follow the mating habits of other filefish. The Male follows the female, the female scouts out suitable areas to deposit the eggs. Once the female finds a suitable spot, usually in a toxic algae she thrusts her body into the algae. The male nuzzles the female and the eggs are laid and fertilized by the male. Laying the eggs in a toxic algae reduces the chances of predation of the eggs. The eggs are not cared for by the parents. 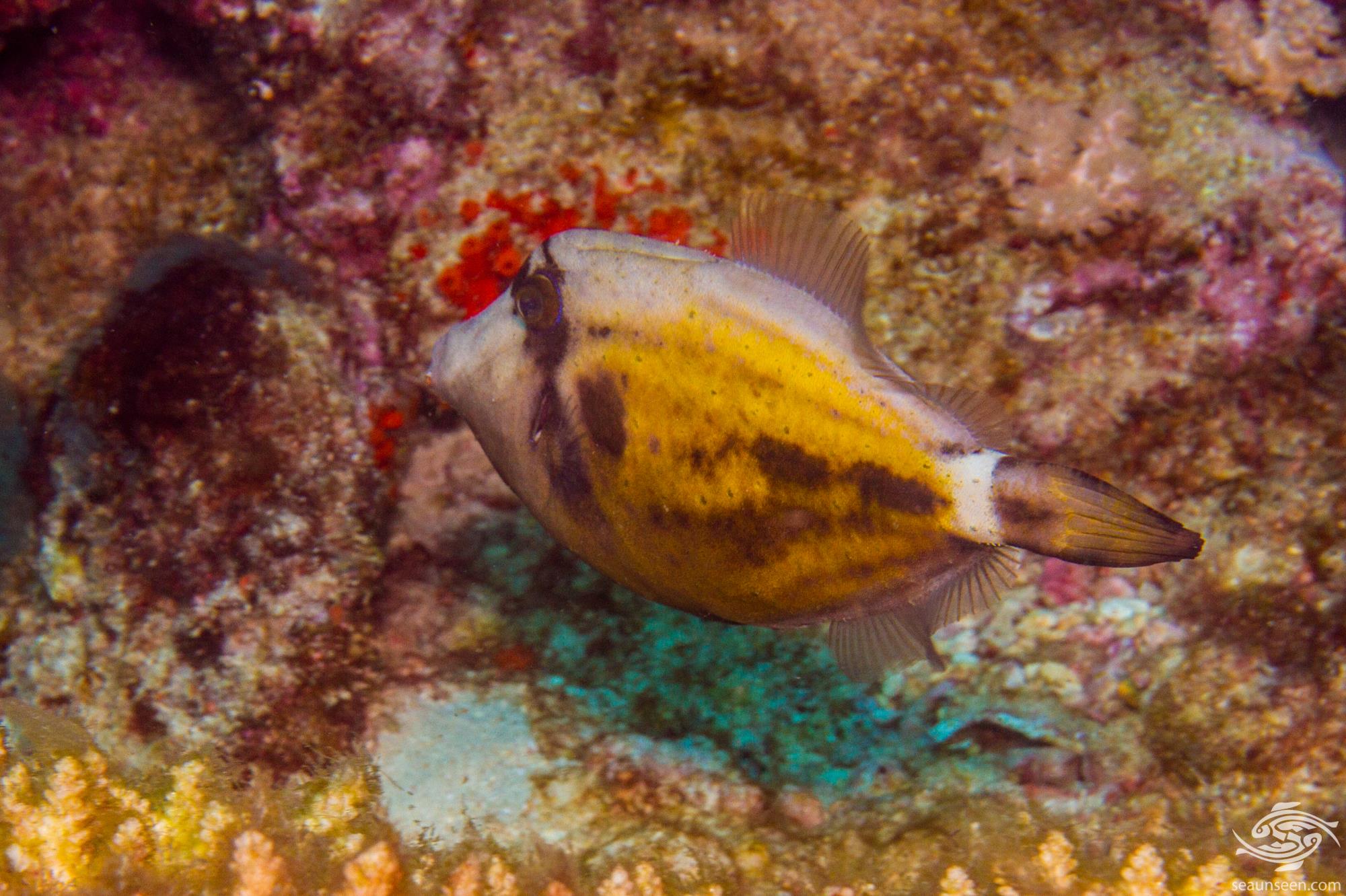 Spectacled Filefish are probably seldom kept in private aquariums. They are not reef safe and should be kept in fish only tanks. 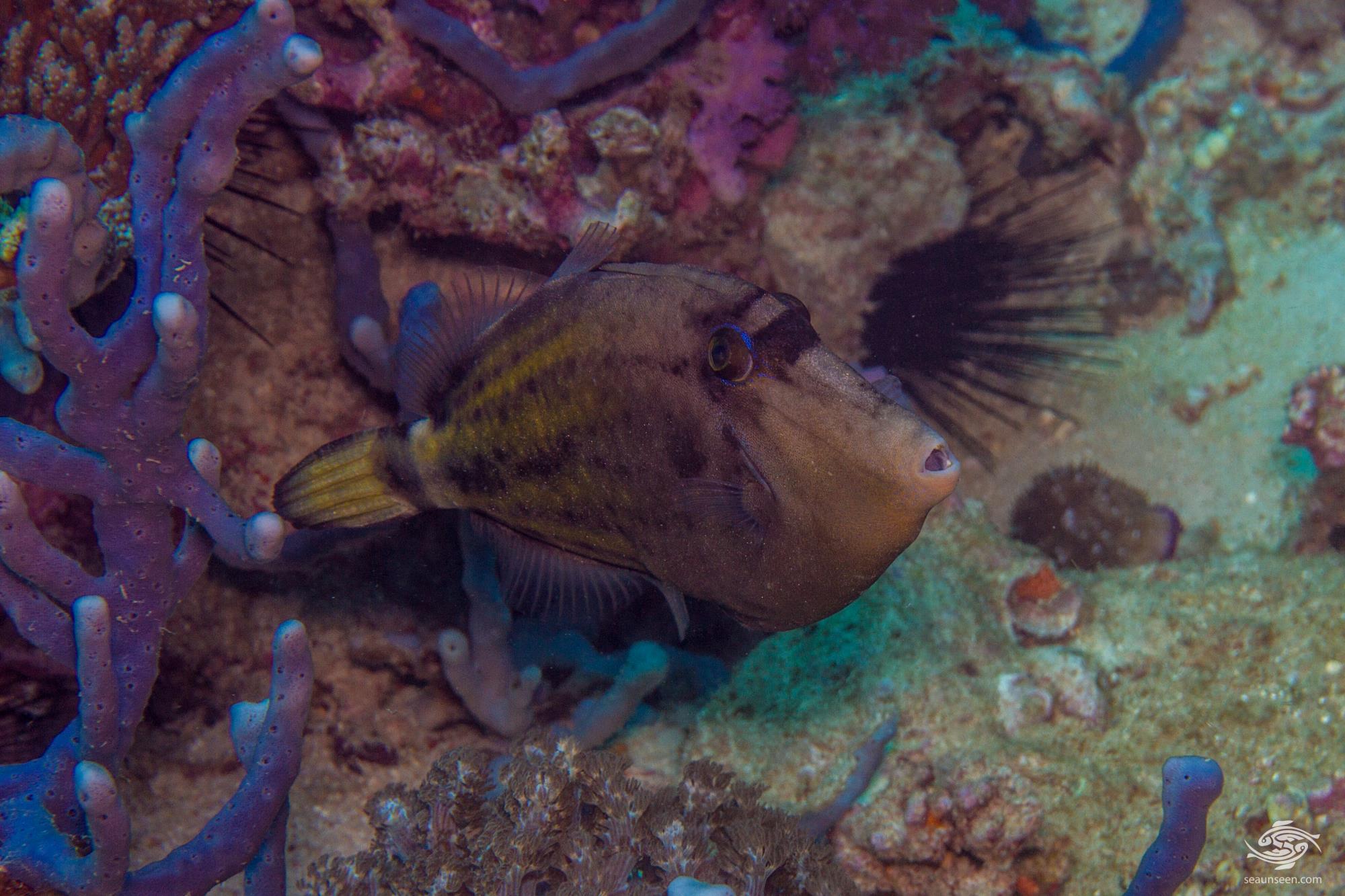