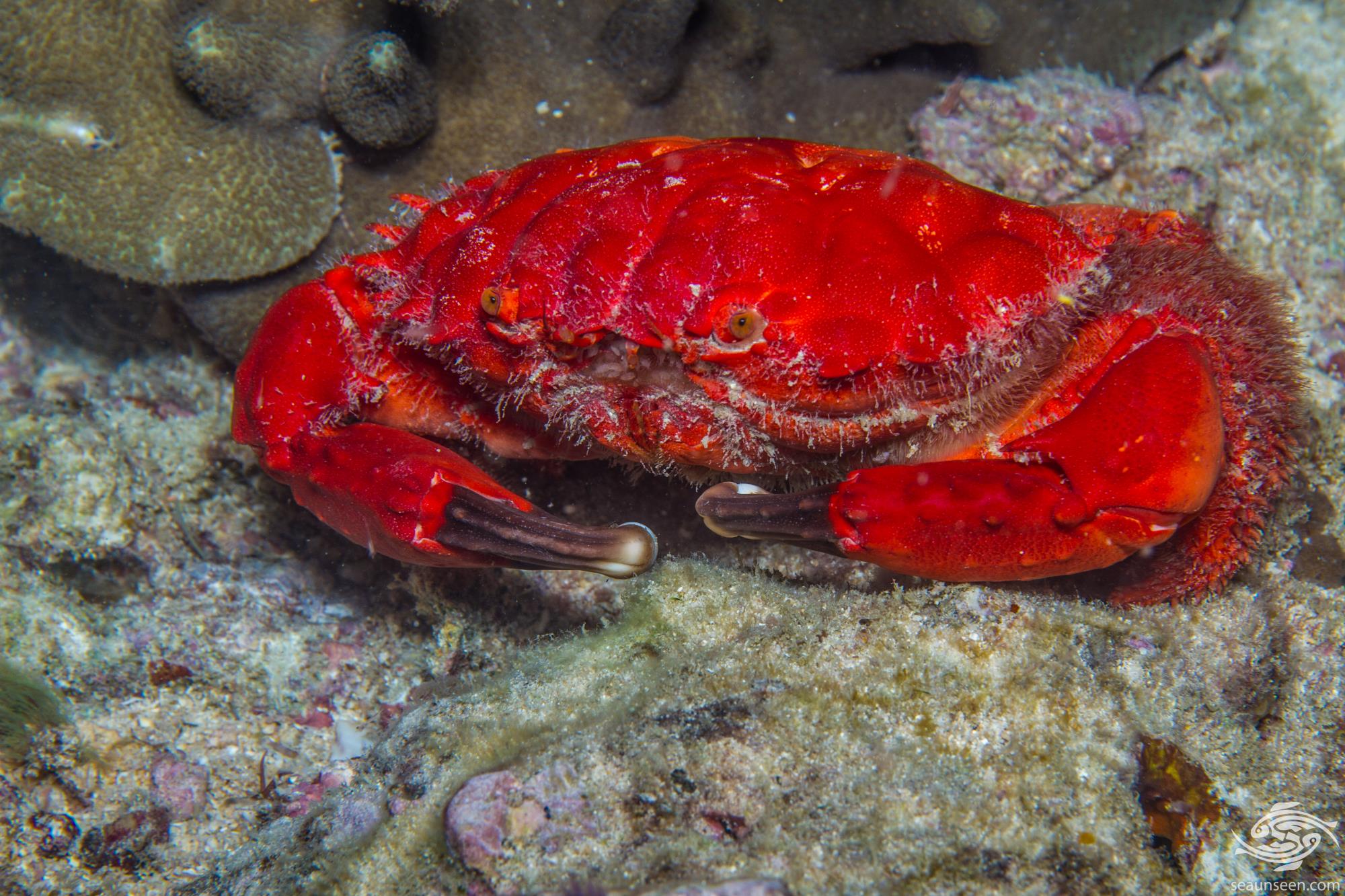 The Spiny Spooner Reef Crab (Etisus dentatus) is also known as the Red Reef Crab. They obtain their name from the spoon shaped endings of their chelipeds and the spiny carapace. If one looks carefully at the end of the claws one can see the spoon shaped depression in the end of the claw.  They are occasionally seen while diving at night on the Tanzanian coastline but are not common.

Many crabs in the Xanthidae family are known to be toxic and there is a strong possibility that the Spiny Spooner Reef Crab is at least mildly toxic, so one should never eat these crabs.  The poisons are very similar to those of Pufferfish and may be produced by symbiotic bacteria in the crab. The poisons are nerve poisons and are not broken down by heat.

Spiny Spooner Reef Crab have a body that is wider than it is long. The top of the carapace is covered with a distinctive bumpy pattern which distinguishes it from other similar species.  There are usually seven large spines on the front of the carapace, often with smaller ones in between. The walking legs are hairy and all the specimens we have seen have been a bright red color.  They grow to a maximum width of 12 cm.

The claws are fairly large and robust proportionally but not as large as other similar related species. The inside of the claws have teeth on them and the ends are spoon shaped. 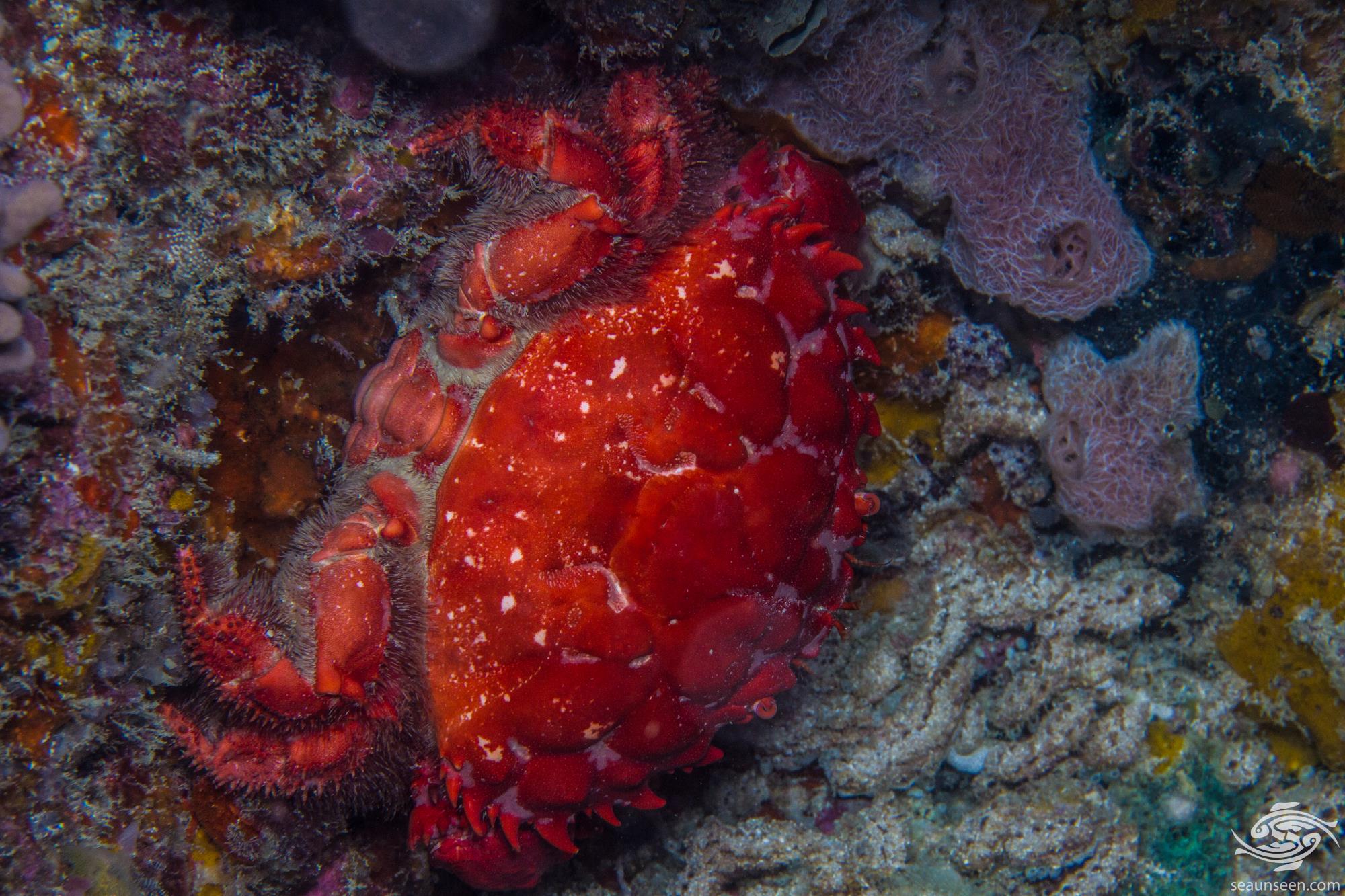 In Tanzania the Spiny Spooner Reef Crab are only seen on night dives on the top of reef flats at around 10 to 15 meters in depth. They are usually seen on a prominent spot on the reefs sitting out in the open and do not move once lights are put on them. This makes them easy to photograph. This behavior may be explained by their potential toxicity when eaten. 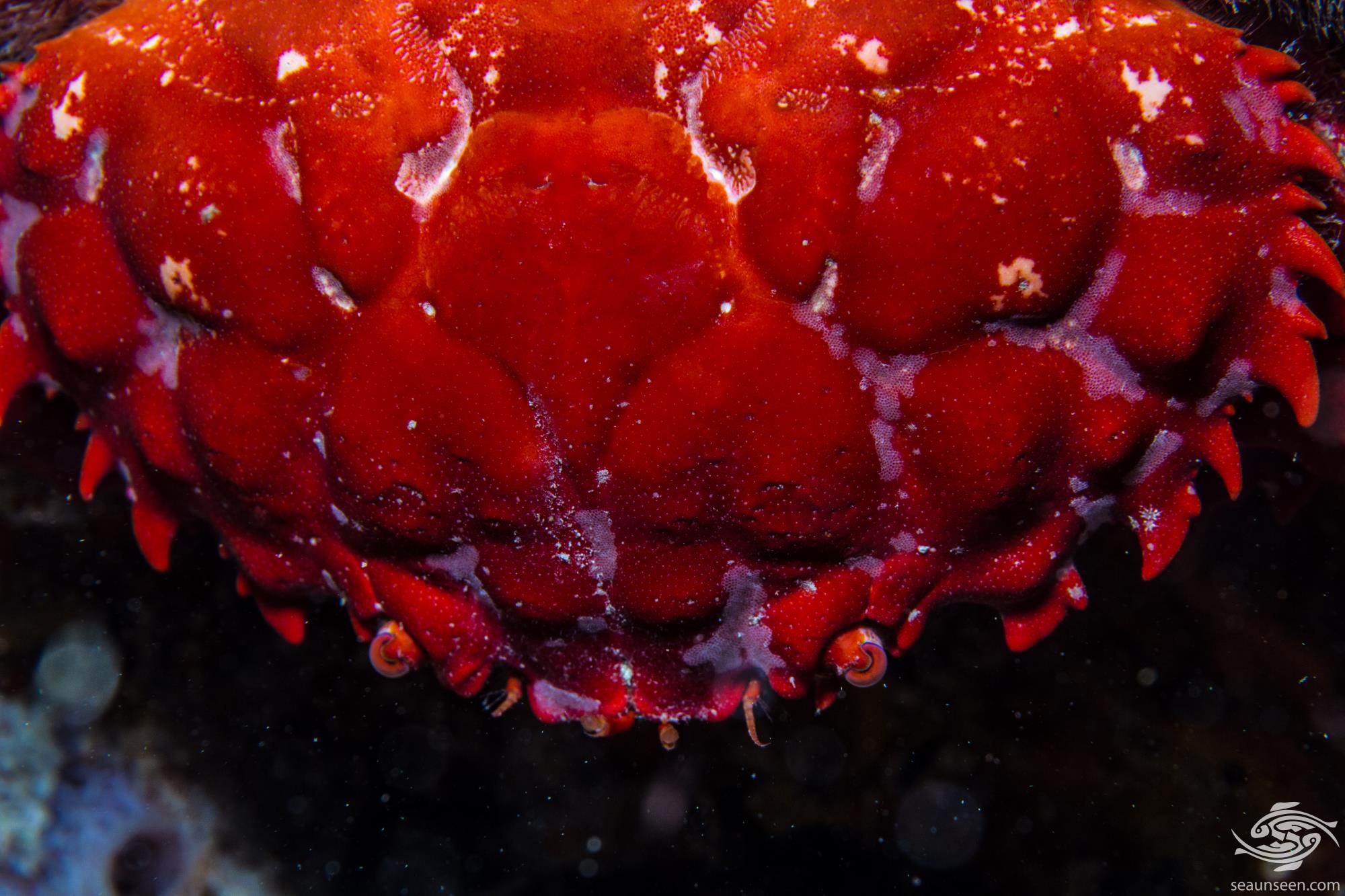 Spiny Spooner Reef Crab are found across the Indo West Pacific area from the East Coast of Africa across to Hawaii, north to Southern Japan and south to Australia. They are found from the intertidal zone down to twenty meters. We have only seen them on reef flats between 10 to 15 meters. 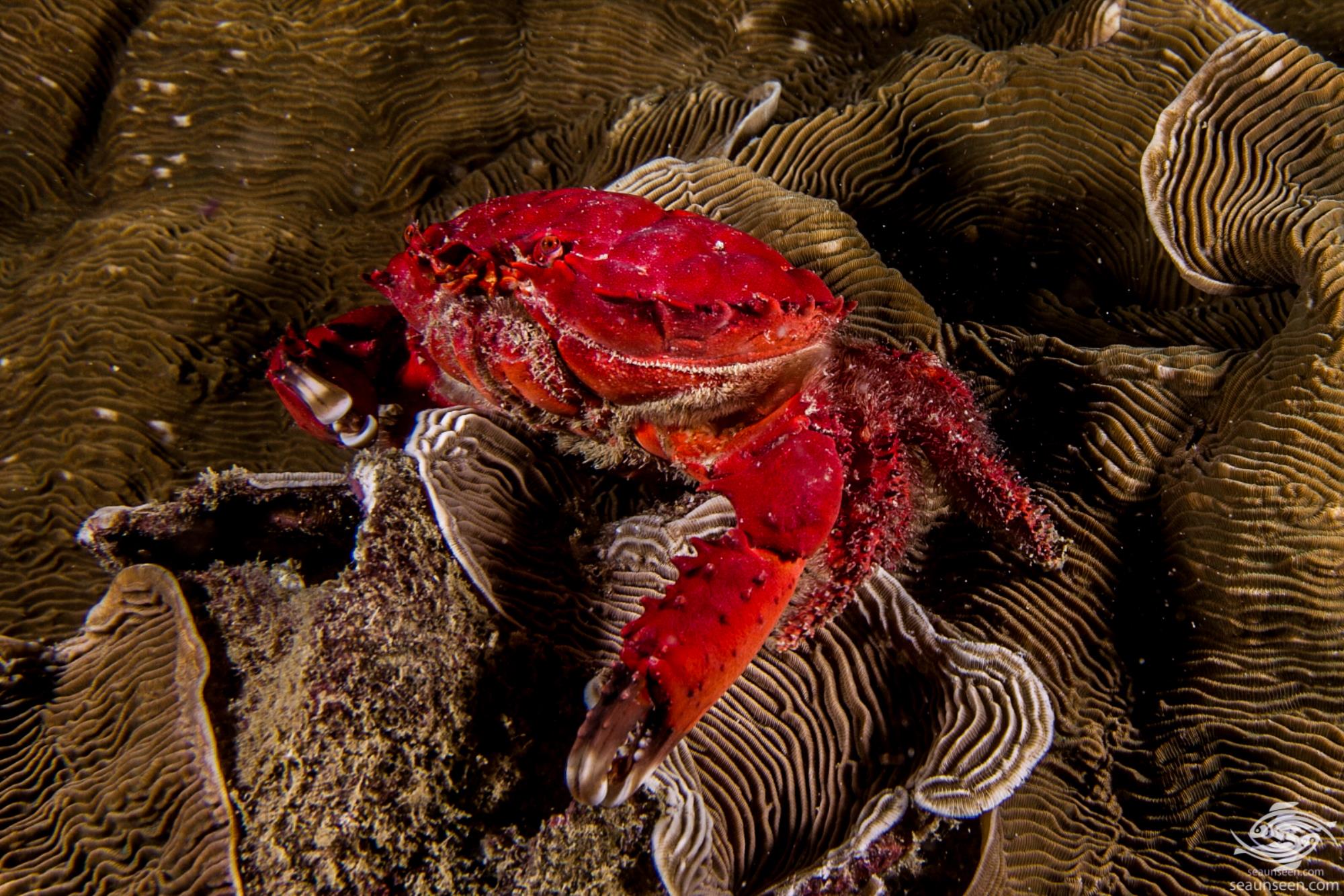 The claws of the Spiny Spooner Reef Crab have depressions in them that are spoon shaped and these are used to scoop meat out of mollusks which they have crushed with the teeth higher up in the claw.   They feed on various types of mollusk. 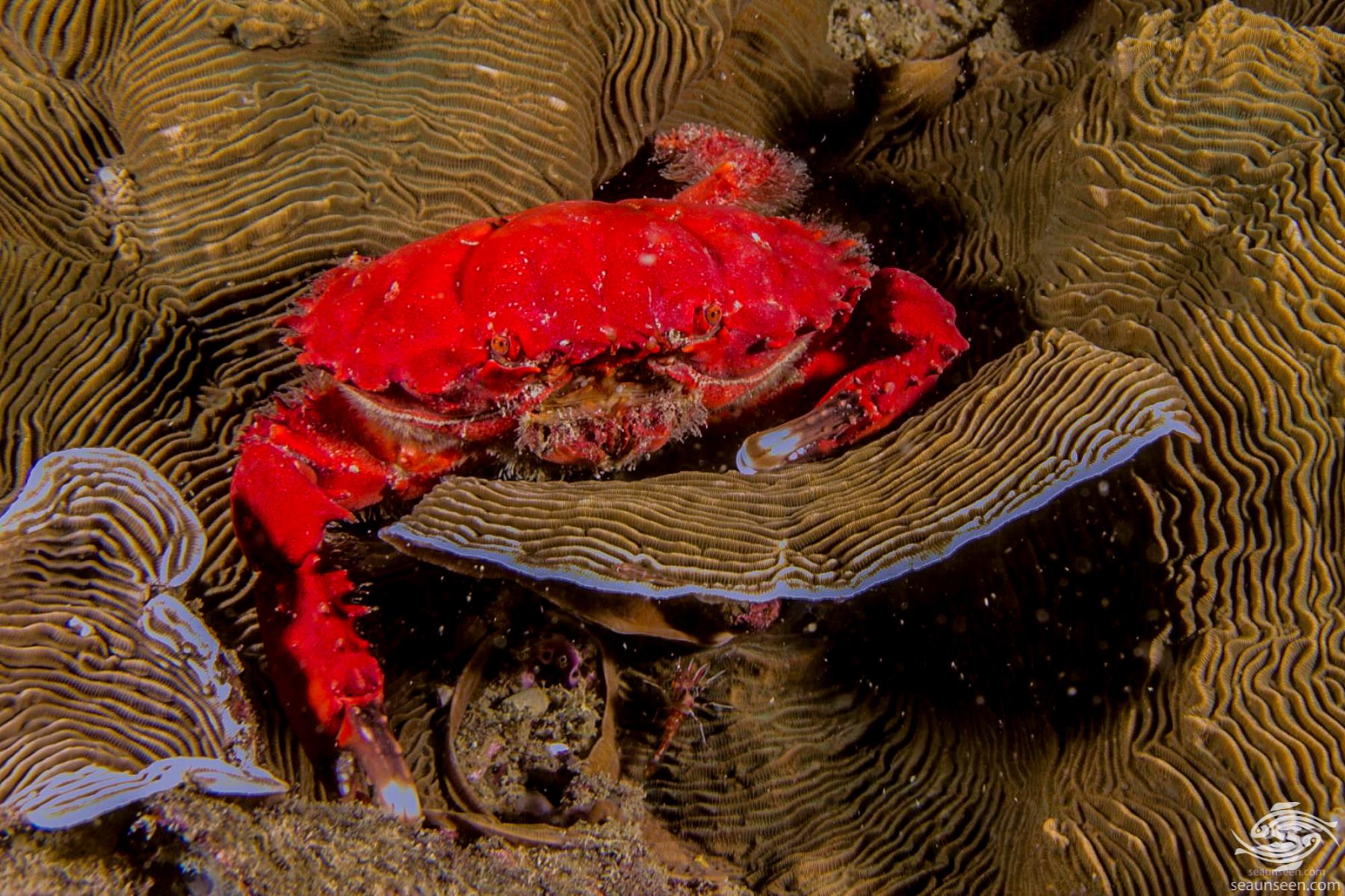 Little if anything is known of the mating habits of these crabs . Mating appears to be a prolonged process and the eggs on the female are fertilised by the males and then stored under the telford of the female until hatching.

Once they hatch the larvae go through a planktonic stage before settling down and growing into their adult form. 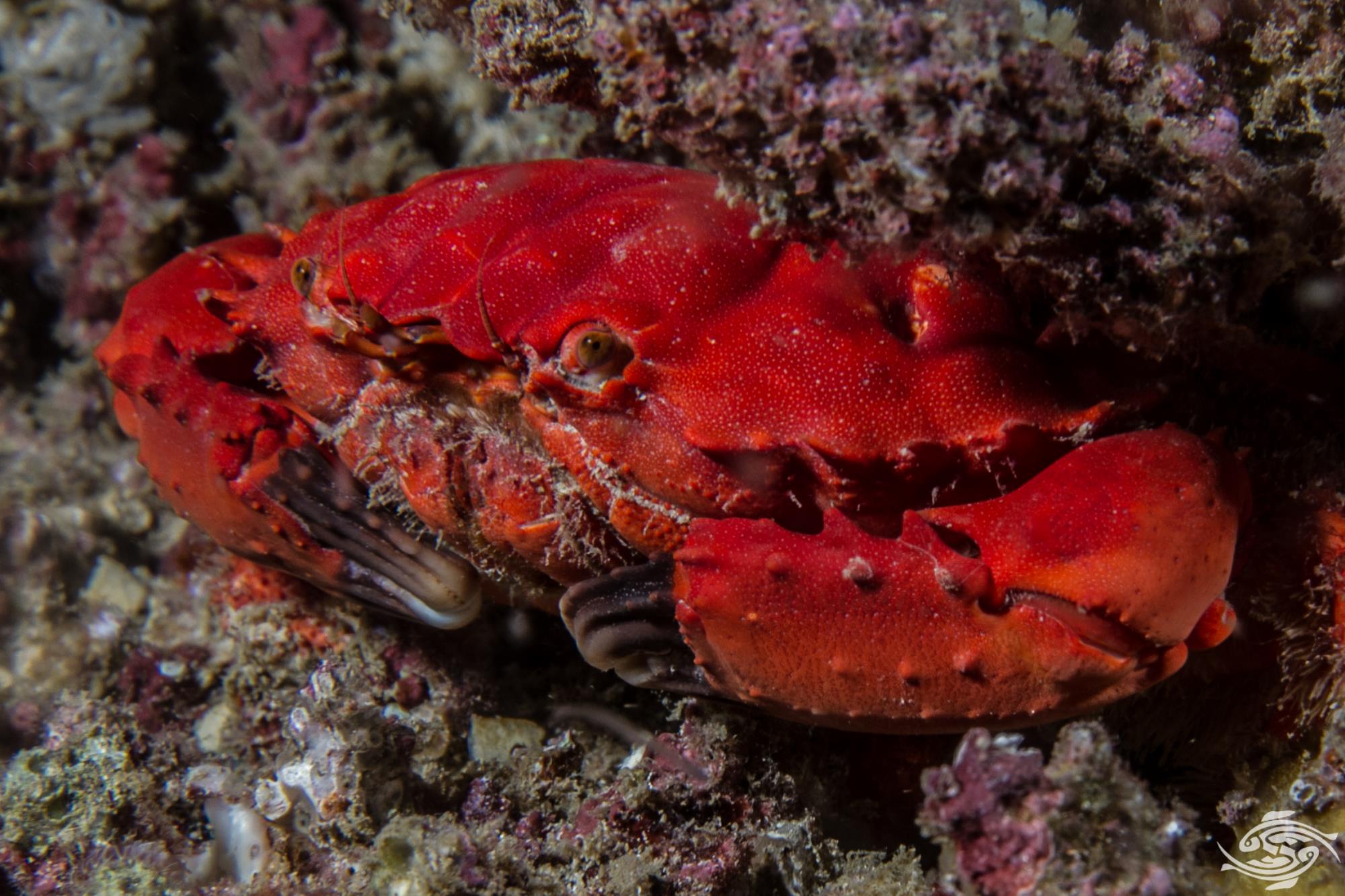 The Spiny Spooner Reef Crab is not exploited commercially because they are potentially poisonous. There is no literature on the toxicity of Etisus dentatus, however Etisus splendidus a very similar species is known to be at least mildly toxic. 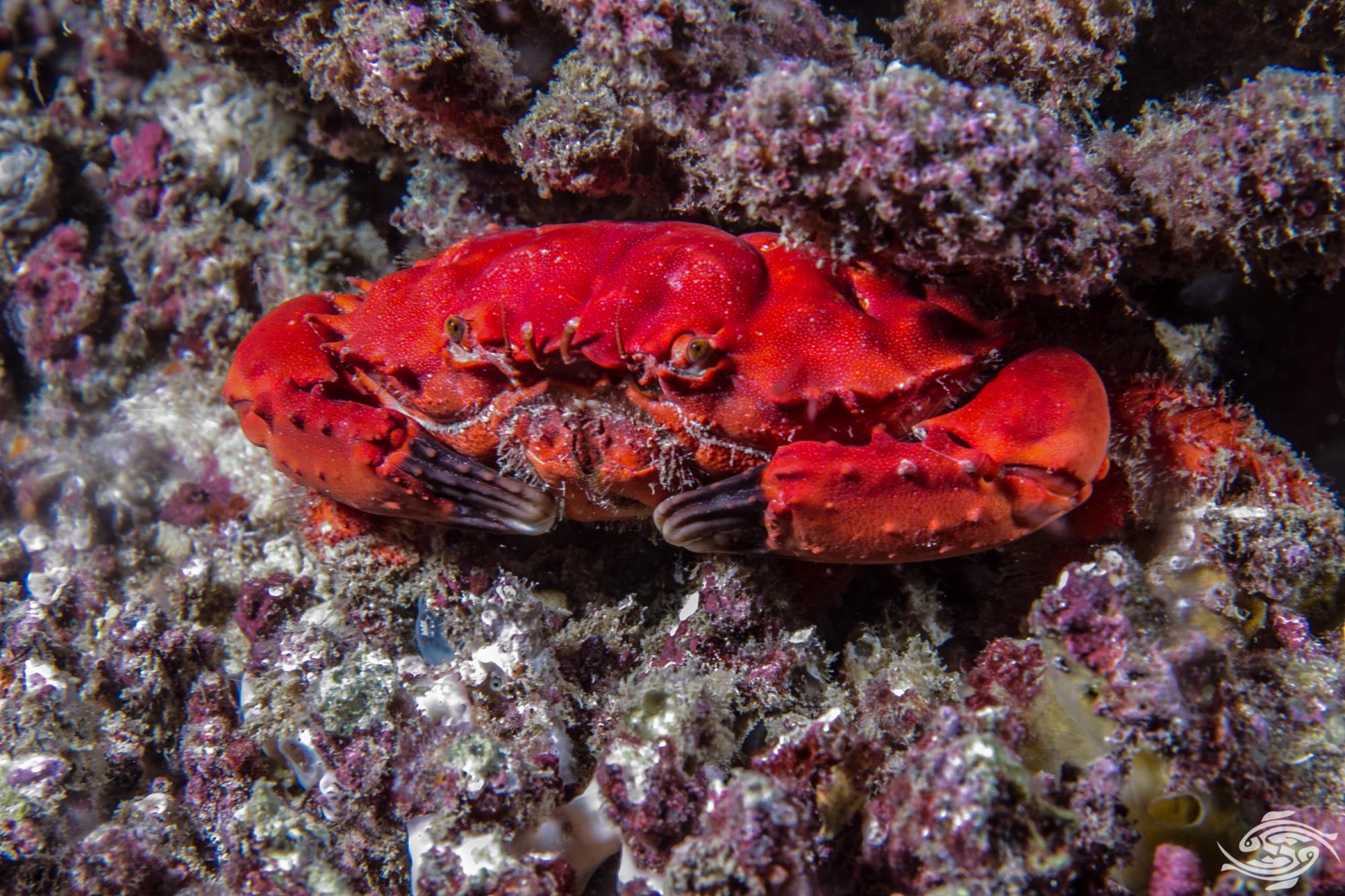