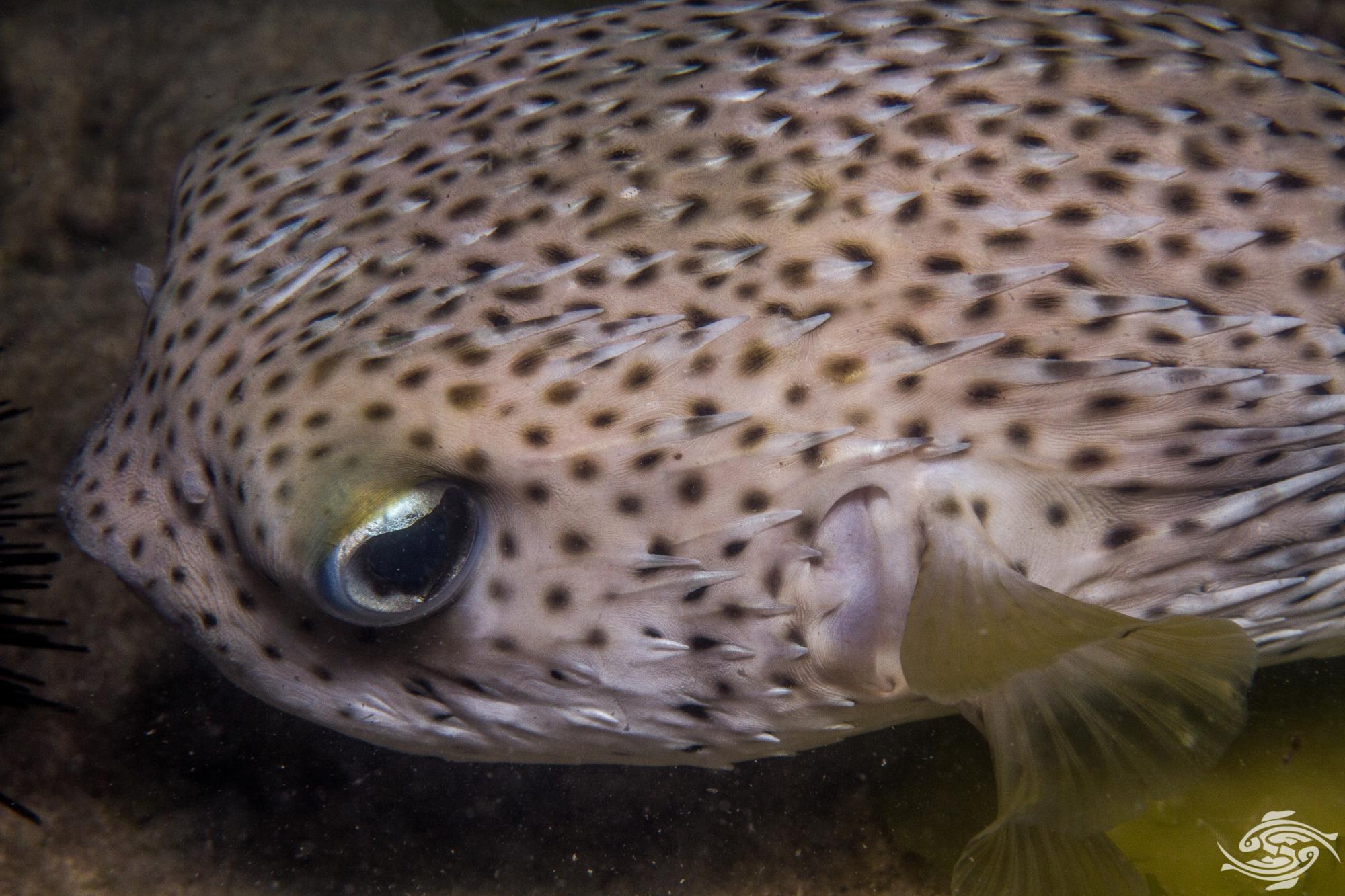 The Spot-fin porcupinefish (Diodon hystrix) is also known as Spotted porcupinefish, Black-spotted porcupinefish or simply as the Porcupinefish.  They obtain their name from the spots on their fins and the large number of spines on their body.  As with many other puffers, they have a symbiotic relationship with types of bacteria such as Pseudoalteromonas tetraodonis. This bacteria produces tetradotoxin which is a powerful neurotoxin. These tetradoxin’s are found in their skin and internal organs. 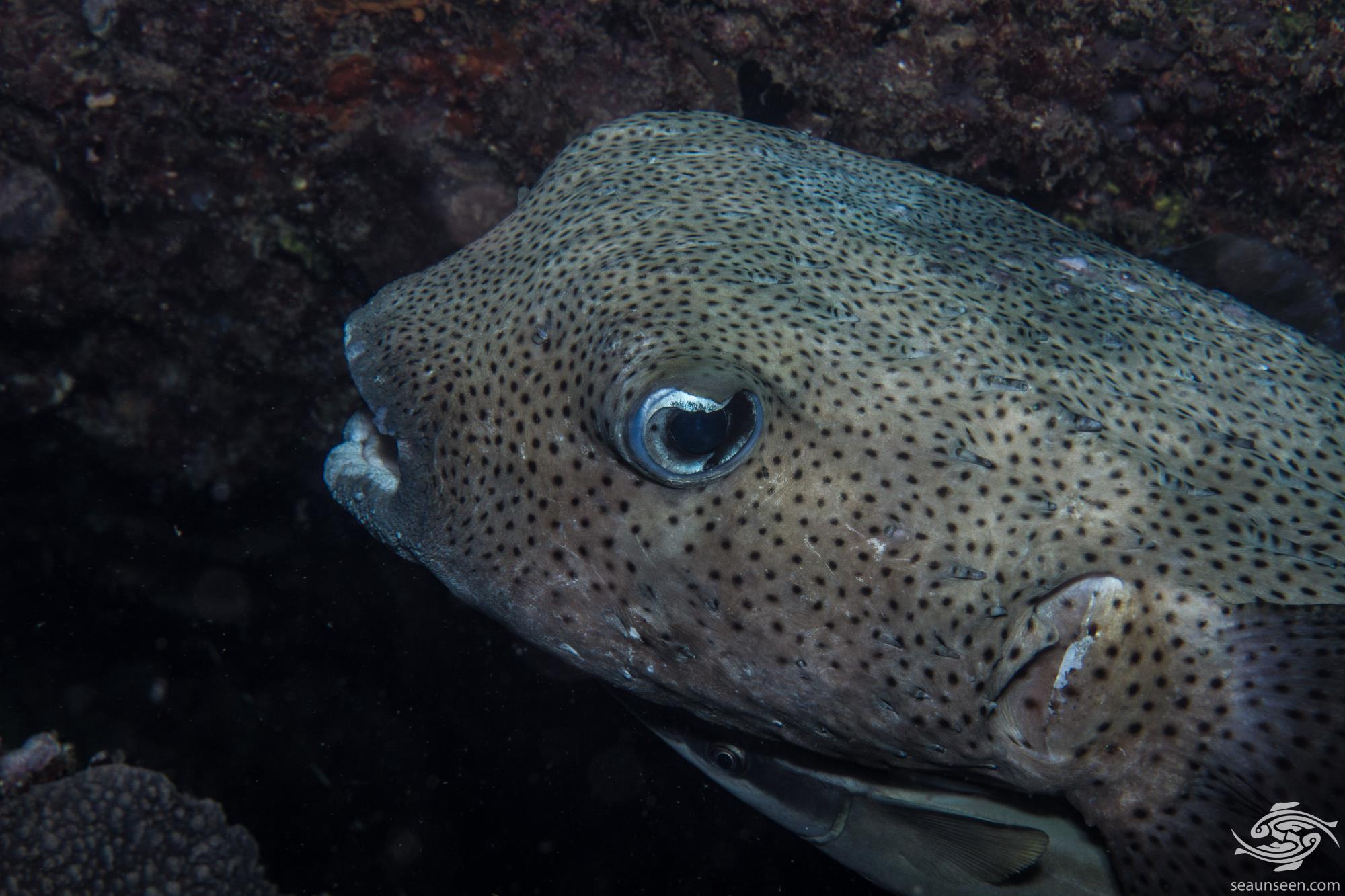 Spot-fin porcupinefish have no scales or lateral line and have a set of slightly protruding nostrils on the snout. The background colour is usually a light brown colour and they have numerous brown-black dots spread across the body and fins, but they also have the ability to darken their colouration.  This is usually done when at rest during the day, presumably for camouflage purposes.  When disturbed during the day their colour quickly lightens.

This darkening of the colouration can be seen in the image below. They have no pelvic fins and the fins are semi translucent with black dots which gives them their name . They have the ability to move their eyes independently and have good vision. Full grown they can grow up to 90 cm in length although they are normally smaller. As with all pufferfish or blow fish as they are sometimes known, they have the ability to take water into their stomach to swell themselves up, making it harder for a predator to fit them in its mouth. They also have the ability to raise their spines. 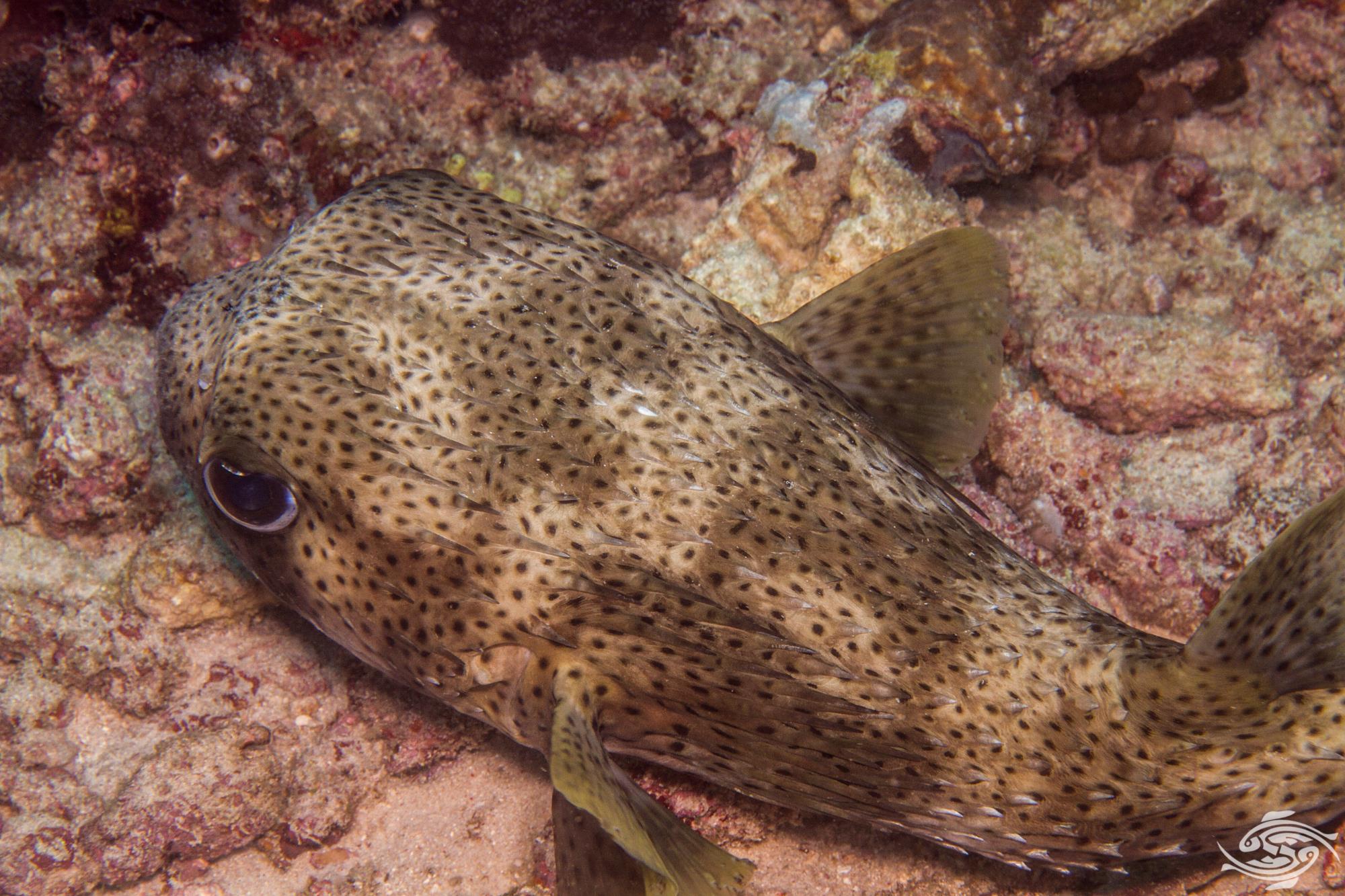 At night they are usually seen swimming just above the reef.  During the day they are often seen resting on the substrate, usually quite well hidden. Despite their poisonous defense they take no chances. If a diver nears them they will usually duck into a hole and are hard to approach too closely. They will normally swim off at a slight angle allowing one of their eyes to point backwards to watch you. They are usually solitary. With their beak they can give a powerful bite and great care should be taken handing these fish. 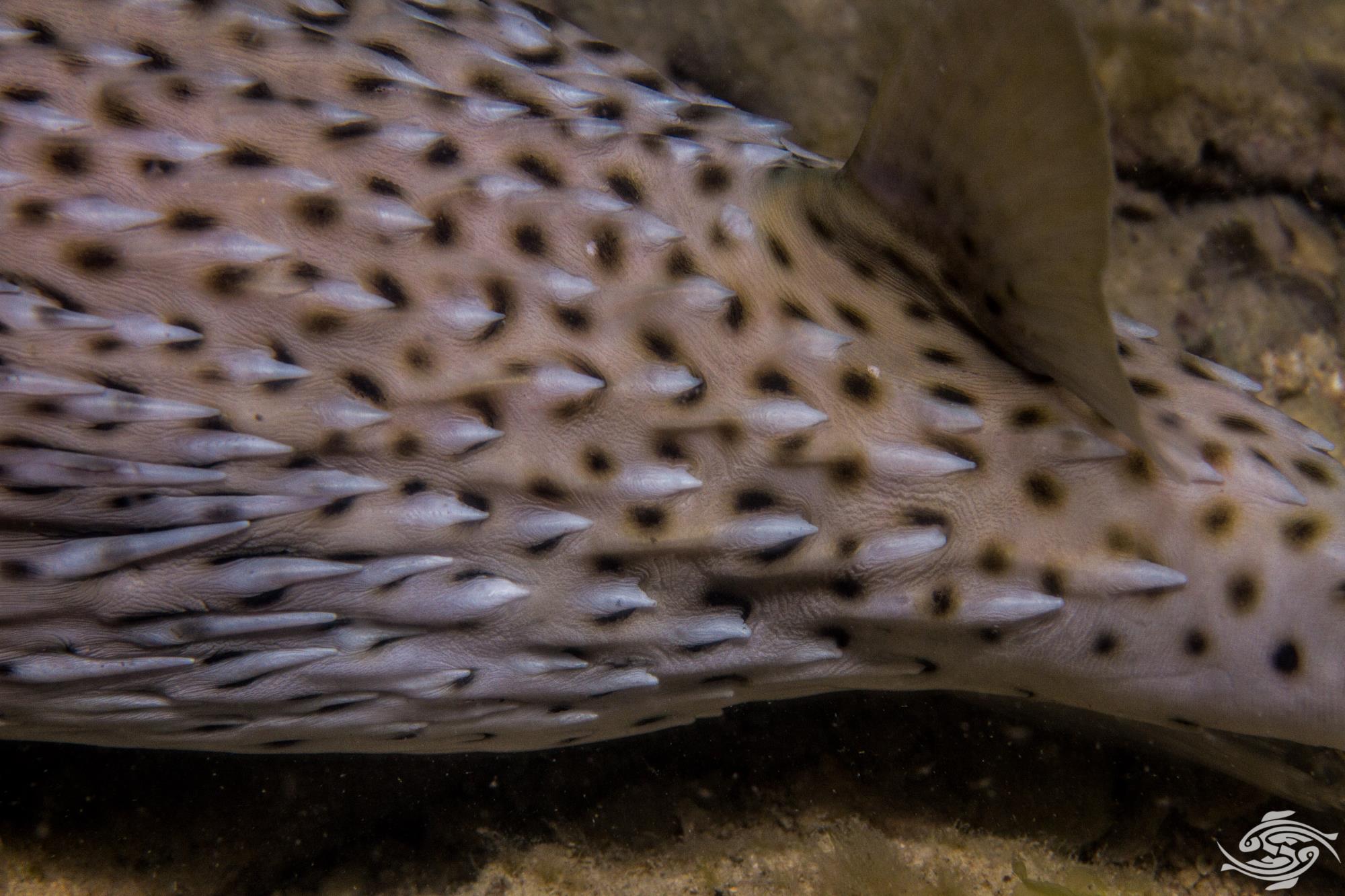 Spot-fin porcupinefish are found across the tropical and temperate regions including the Mediterranean, usually close to the reef and in lagoons to a depth of 50 meters. 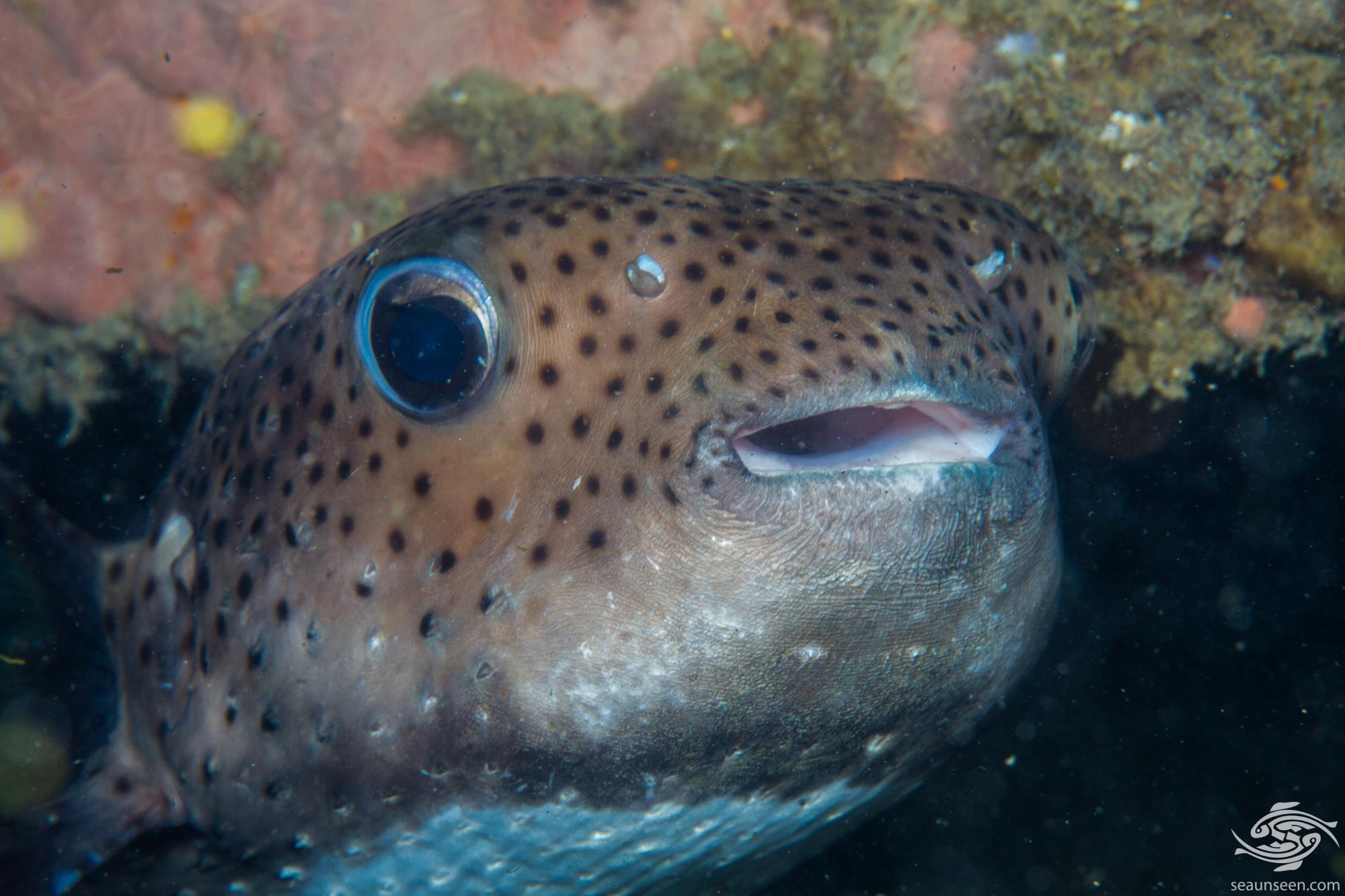 Spot-fin porcupinefish are nocturnal predators, using their impressive looking teeth to feed mainly on snails, hermit crabs, and sea urchins. They have four teeth which are fused into a sharp edged beak and the teeth continue growing throughout their life. They have a very powerful bite which allows them to crush the shells of their prey. Large predators such as sharks, dolphin and some gamefish prey on them. 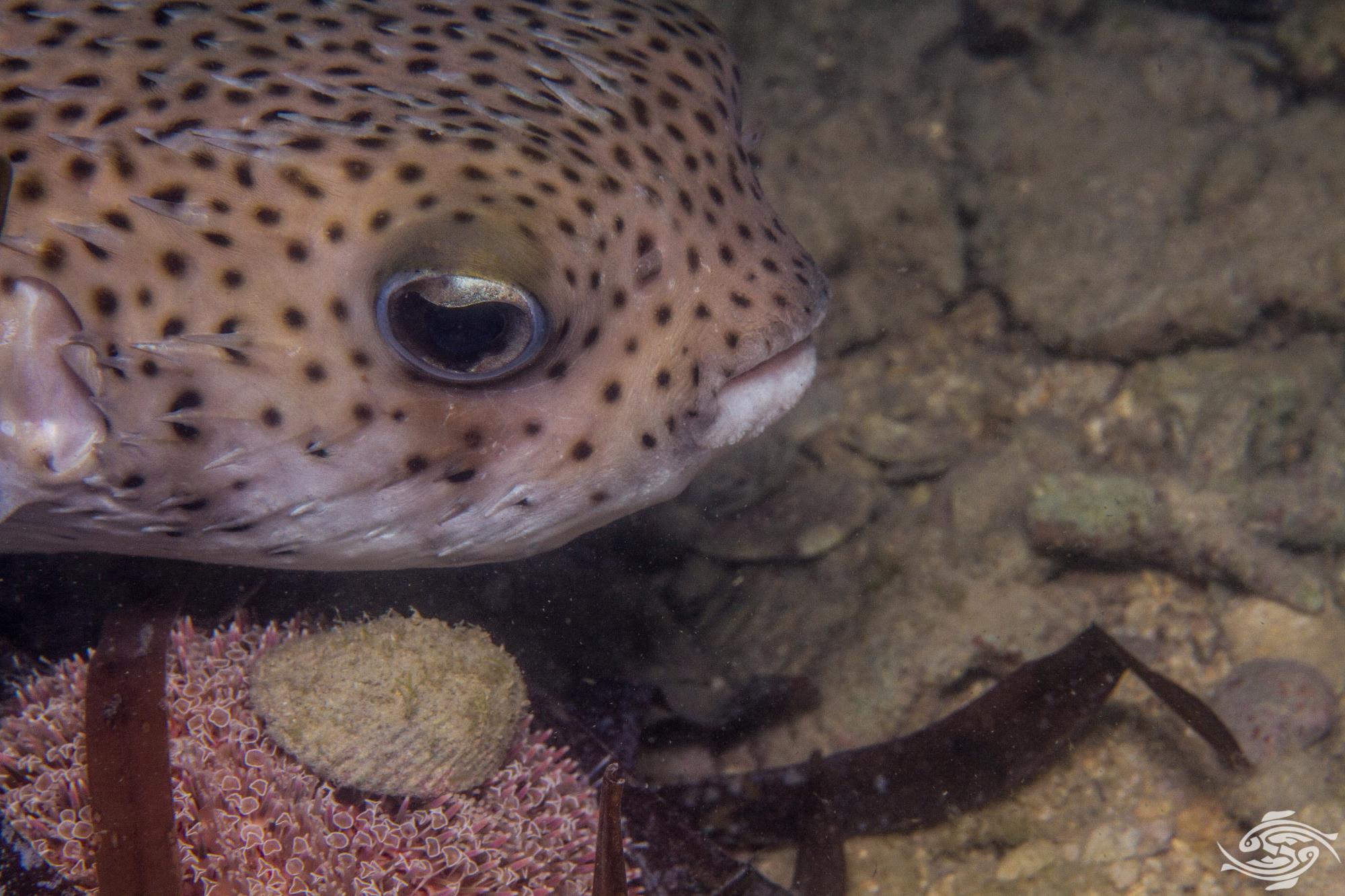 Pufferfish are considered a delicacy in Japan and are bred commercially, so we know something of their behaviour. The eggs are laid in the water table by the female and are fertilised by the male. The eggs which are spherical float for several days and then hatch. The hatchlings live off the yolk sack for several days and then become pelagic. They are often associated with sargassum weed.  This pelagic stage probably accounts for their world wide distribution, as they are swept around by the ocean currents. Once they reach a certain size they head to shallower water and become benthic. 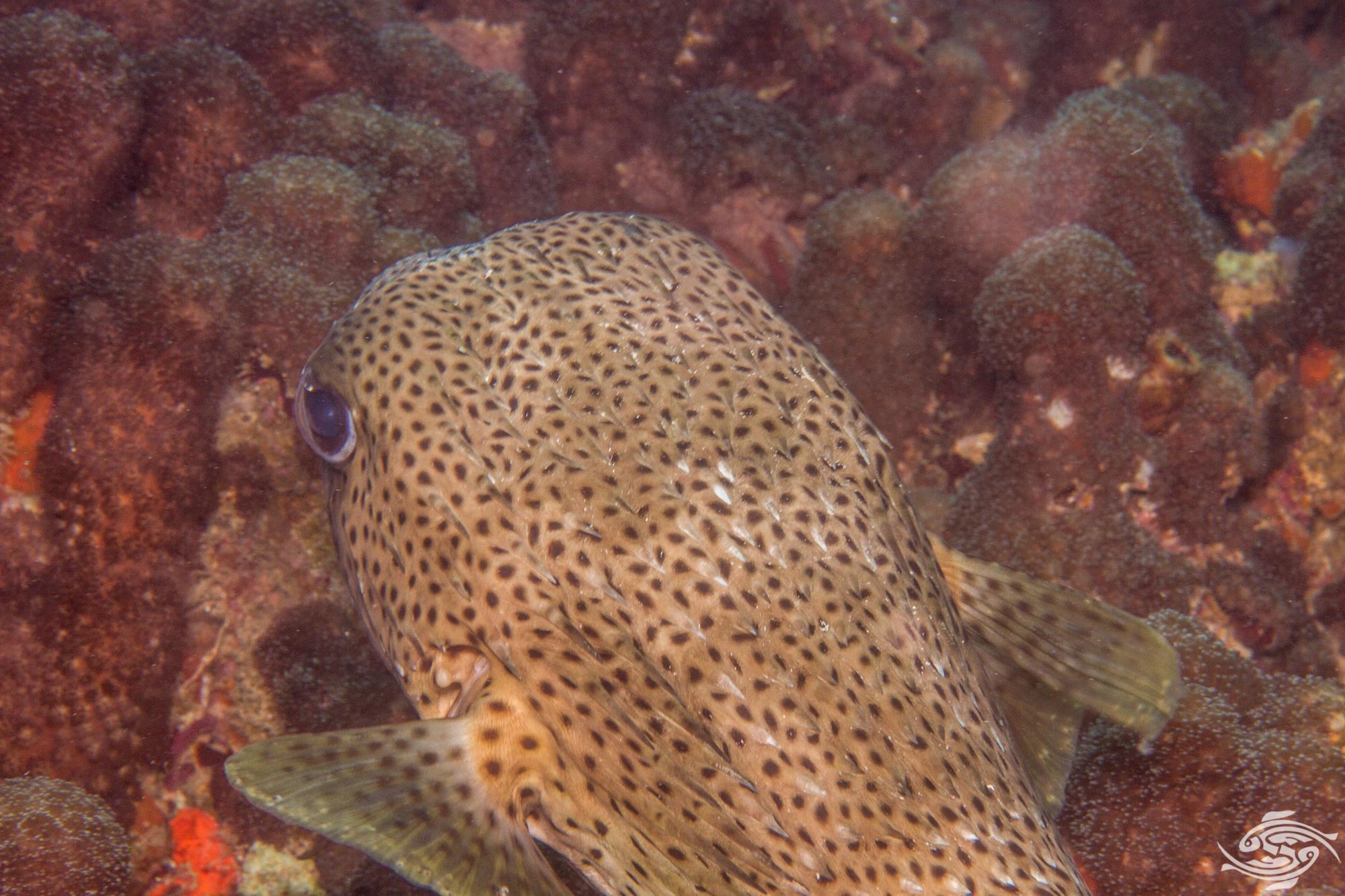 Spot-fin porcupinefish are kept by some aquarists, but because of their constantly growing teeth, they require regular feeds on hard shelled food to prevent the teeth from growing too far and becoming unusable. They are not aggressive fish, but may attempt to eat smaller sickly fishes and may nip long finned fishes. Because of their potential size they require a very large tank. They will also eat most invertebrates and may damage corals. They generally only appeal to specialist collectors. 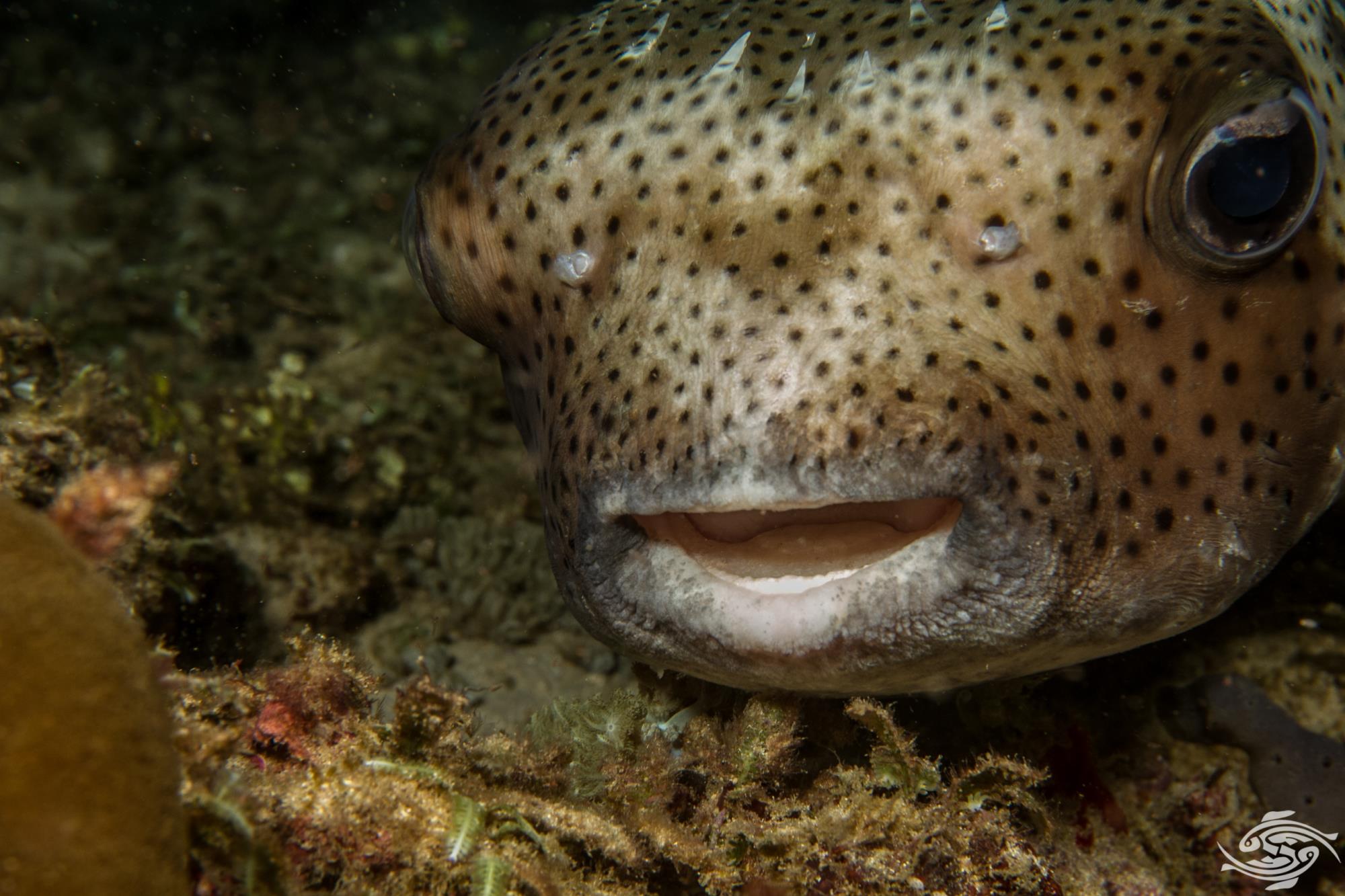 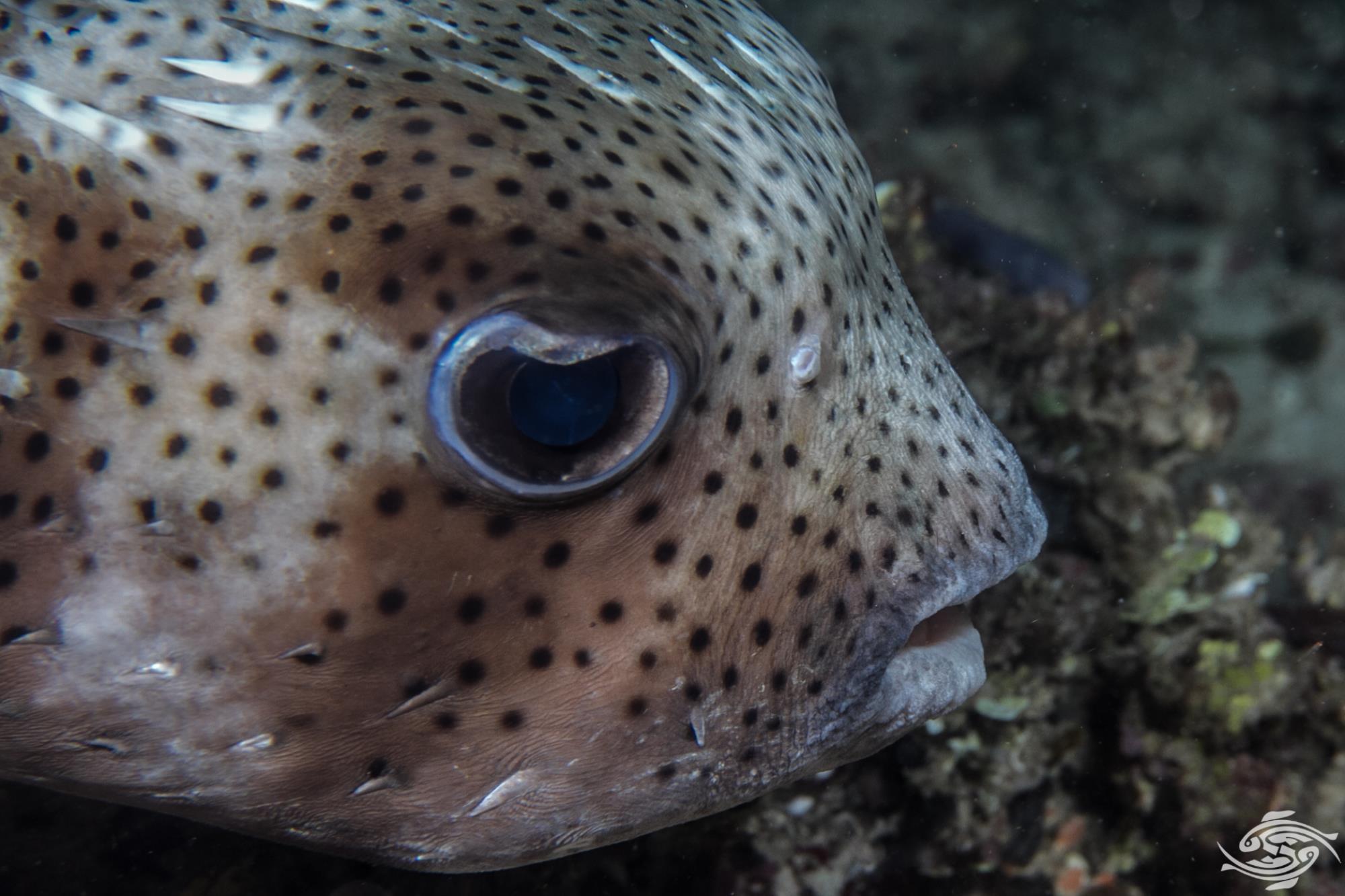 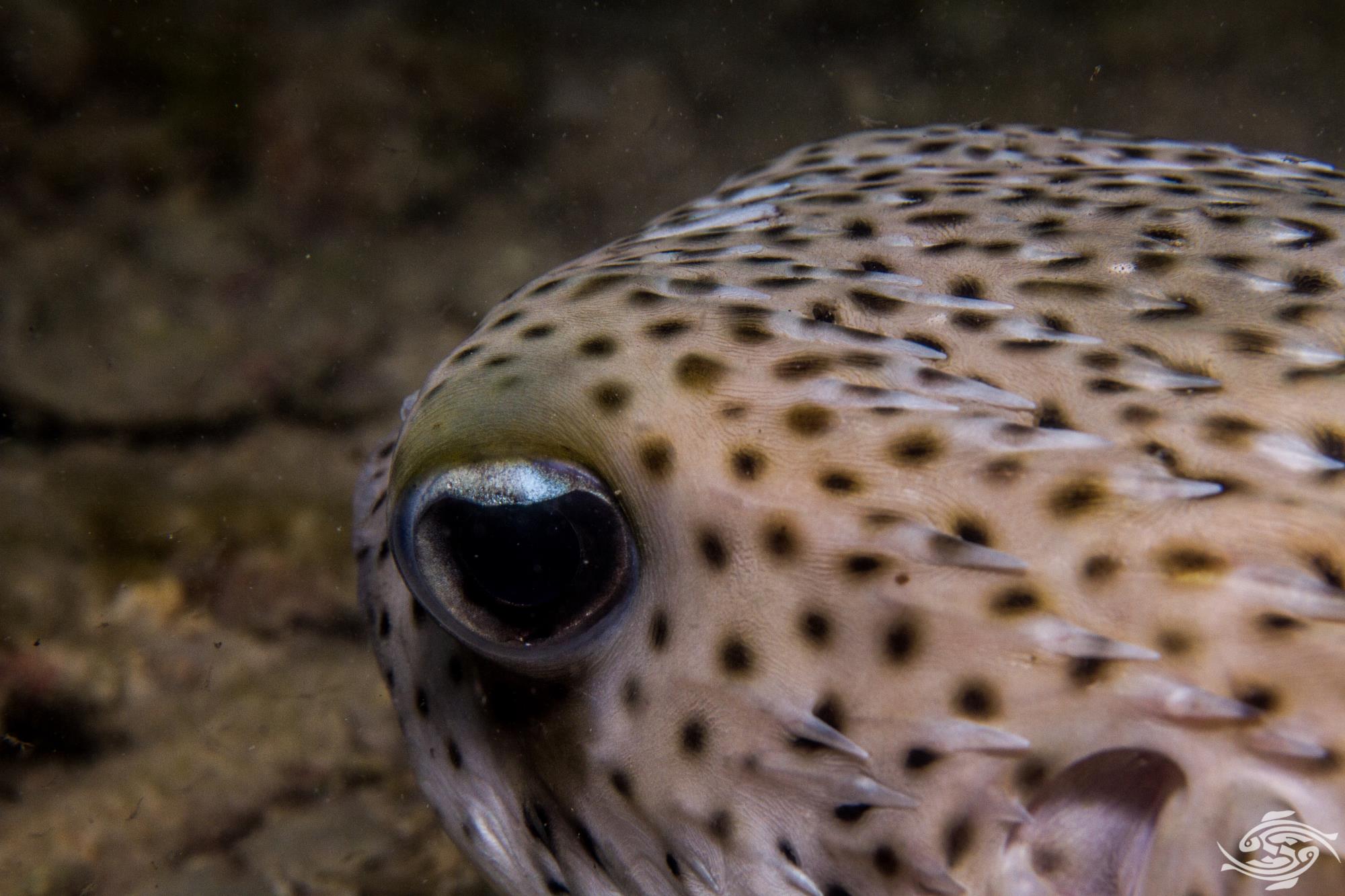 See our other posts on Pufferfish here