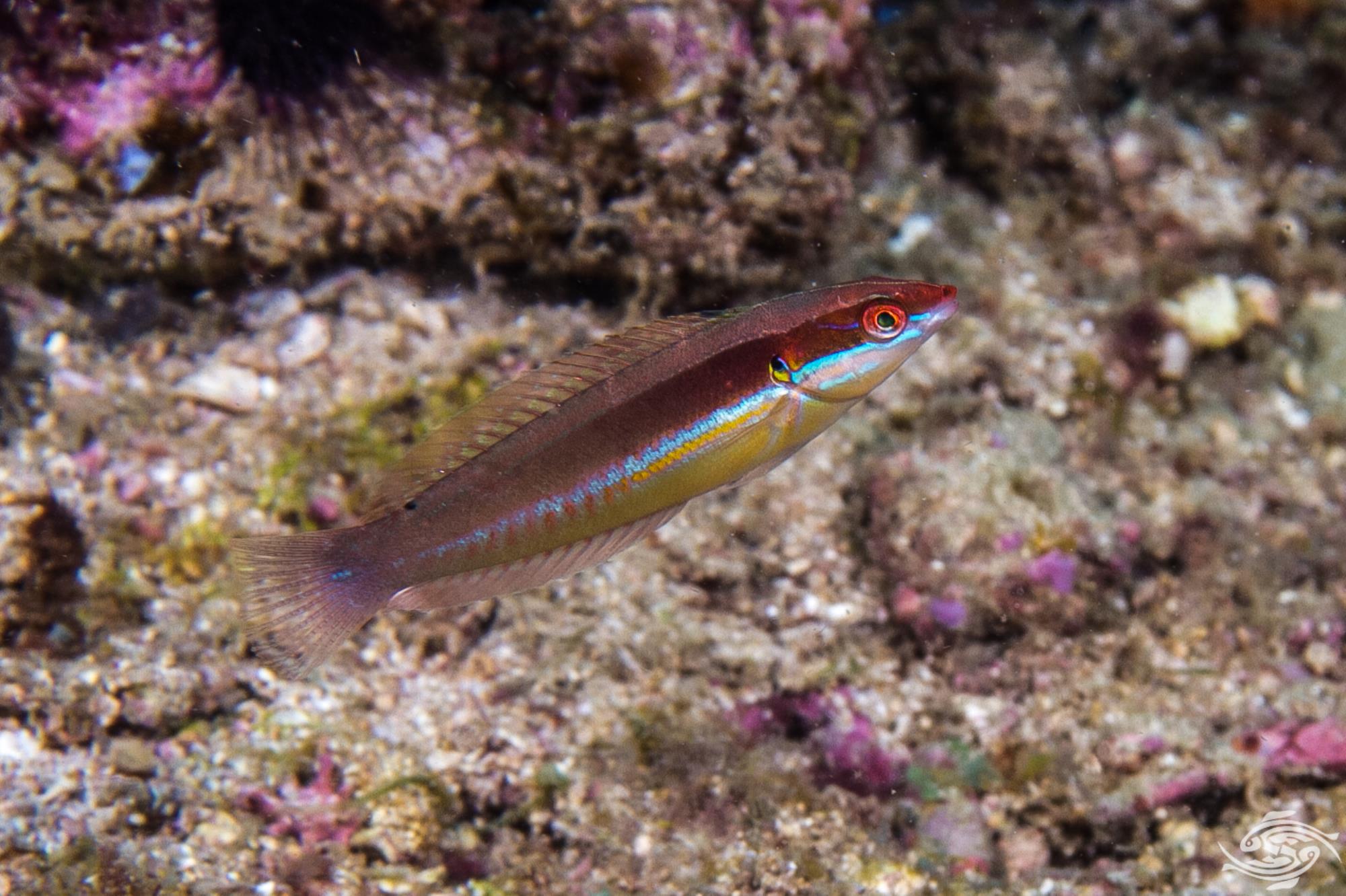 The Spot-tail Wrasse, Coris caudimacula is also known as the Spot tail coris. They are fairly common inhabitants on the reefs and rubble areas of East Africa. 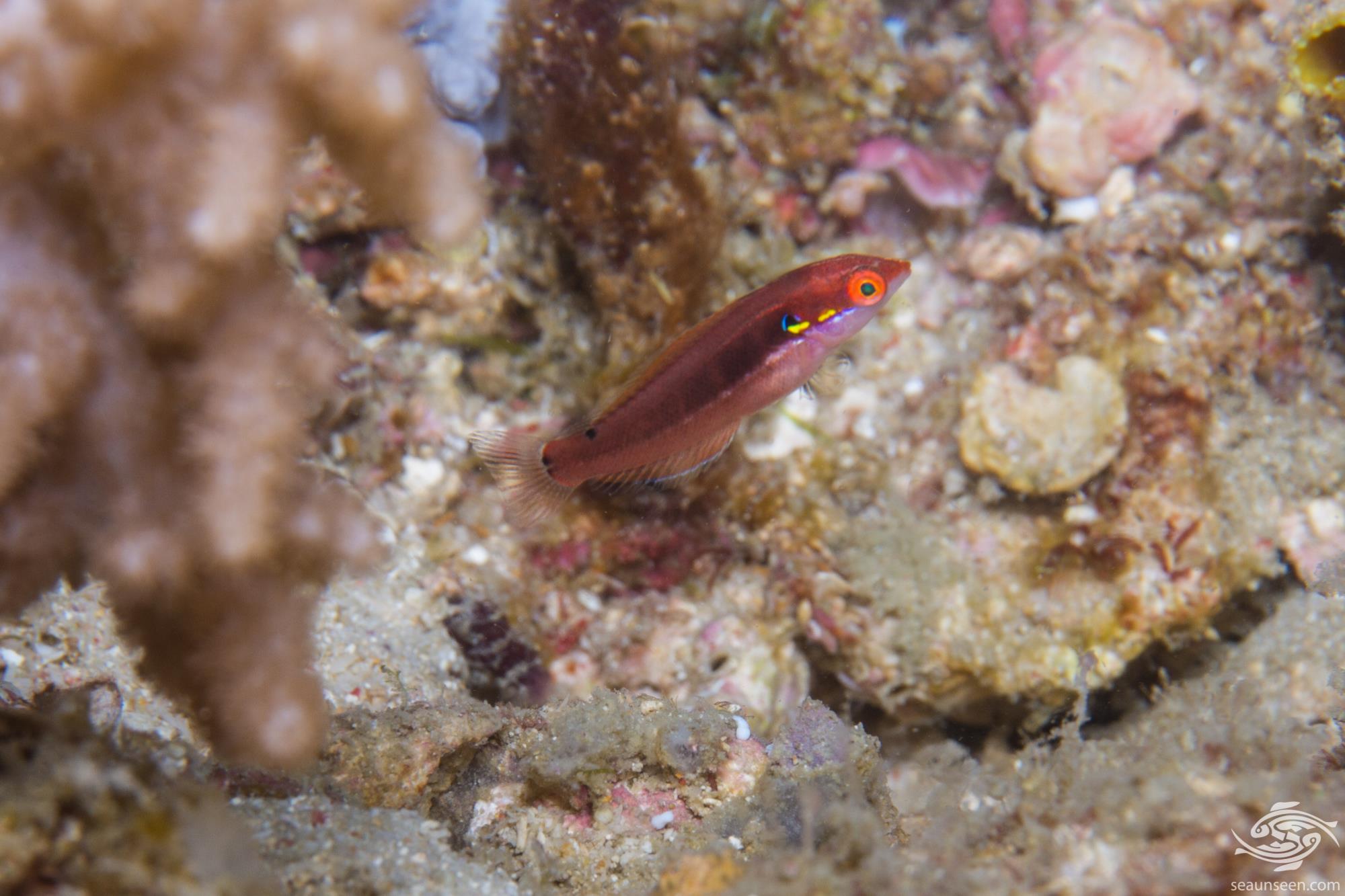 There is a large degree of colour variation in this species, some are extremely colourful and others are fairly dull. The body is elongated and the juveniles are generally as seen in the image above with a red brown upper body and a yellow lower body. A blue line divides these two colours,  extending backwards from the eye.  The spot on the tail which gives them their name is not always prominent. On the top edge of the gill cover is a yellow and black spot. As the fish ages into a mature female so bars develop on the lower body as do four light coloured bars on the upper body which extend downwards slightly onto the lower body. In most specimens the lower body goes a blue or green colour with light red vertical bars. Orange and pink horizontal lines begin developing on the upper body. 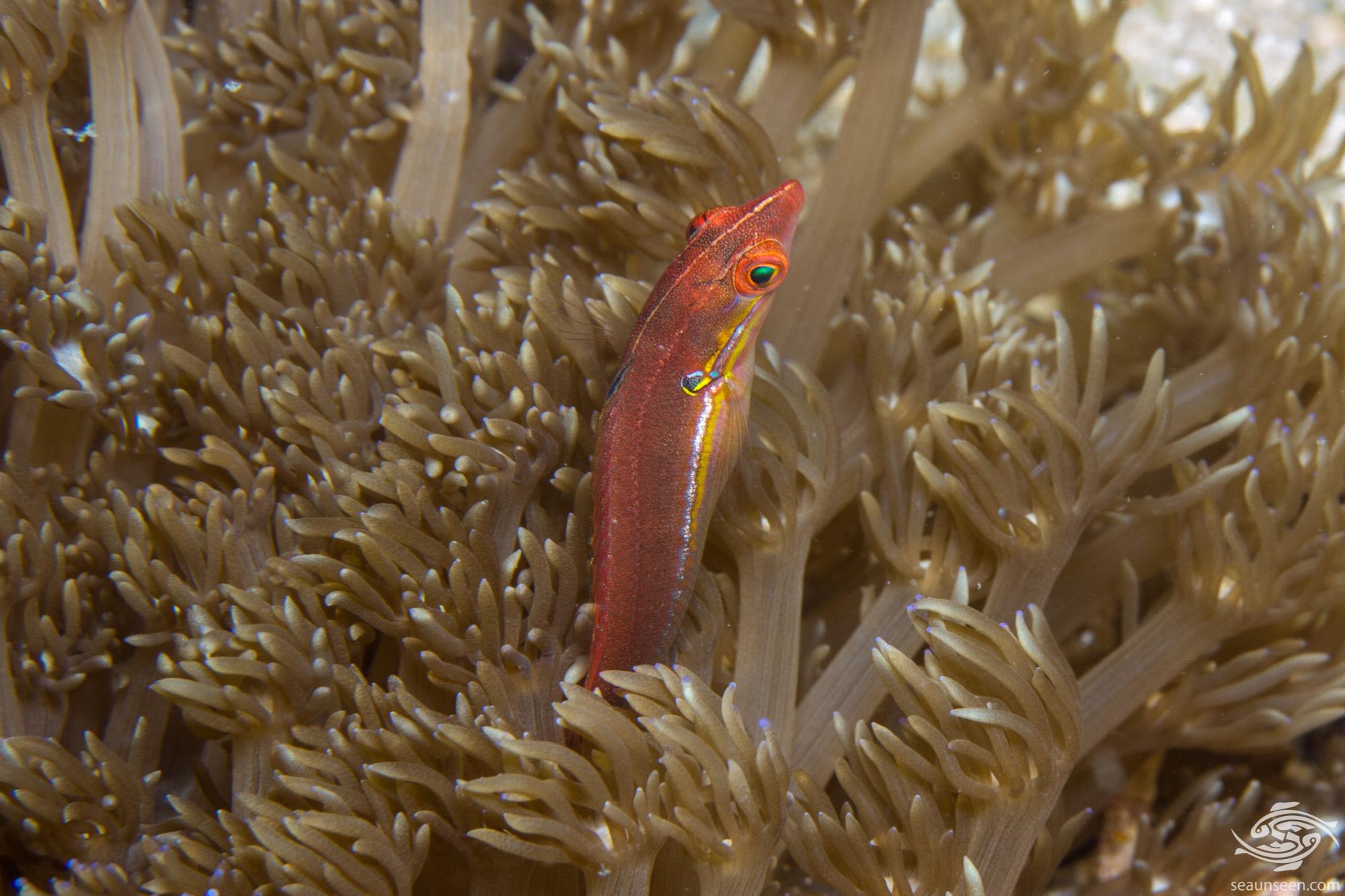 In the absence of a male in the area the larger female will turn into a male and the dorsal fin becomes elongated on the front. On the males the front dorsal spine is usually black. Most females do not have a black area there and it is not known if this is part of the change over of sexes or not. On some specimens the spot on the tail is completely absent but most will have the spot. Males can grow up to 20 cm in length but this is rare, usually they are around 15 cm. The images in the post have been kept in order of fish size to show the transformation.

Diving on the beds of seagrass in Dar es Salaam, Tanzania we have found what may be a colour variation of the Spot-tail Wrasse or possibly a new coris species. They closely resemble the Spot-tail Wrasse aside from the green colouring.  The behaviour of this colour variation is however different to that of the normal, in that they never swim above the substrate and hide in the grass making them difficult to spot. If anyone else has seen this variation please let us know. 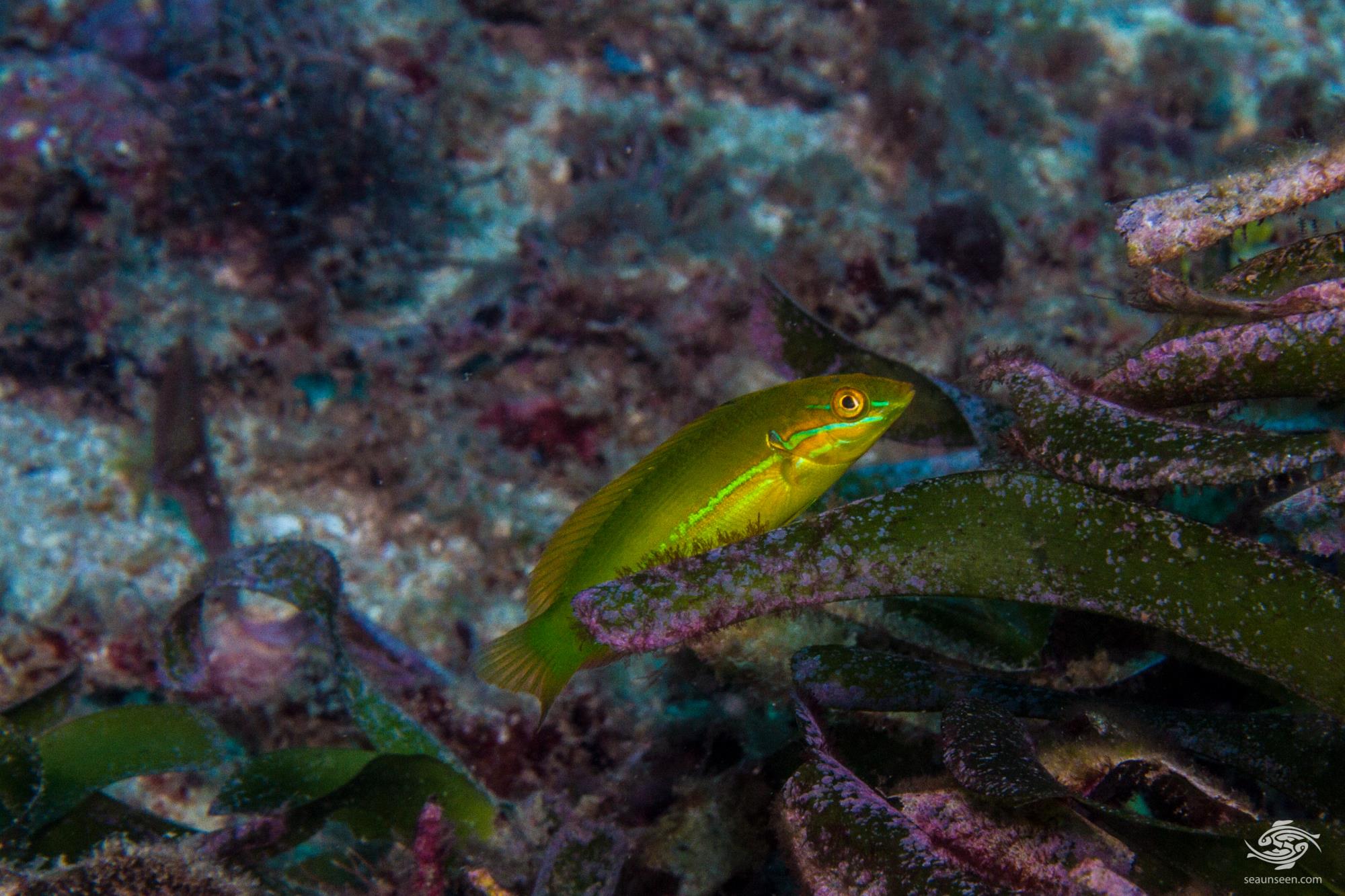 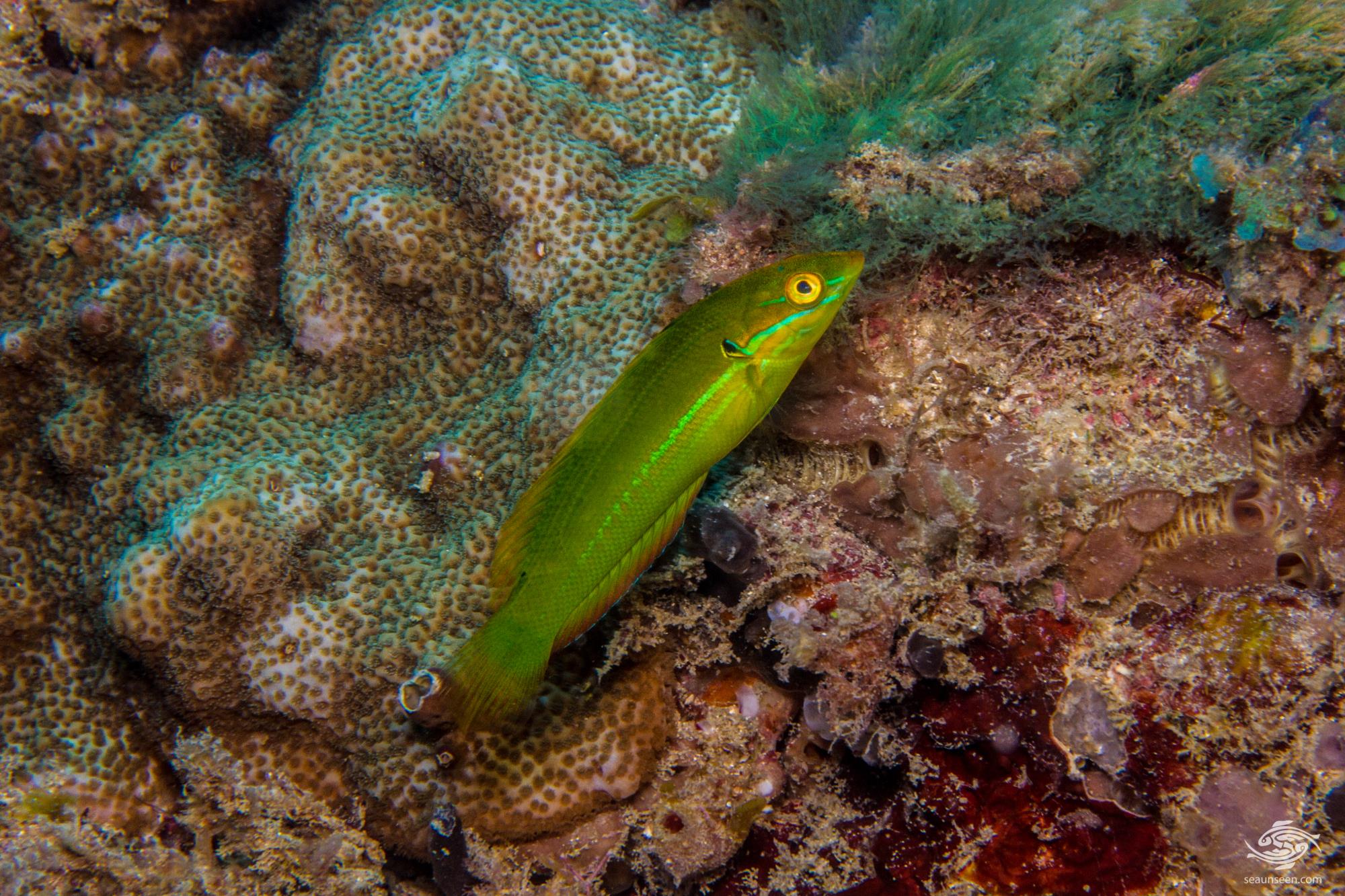 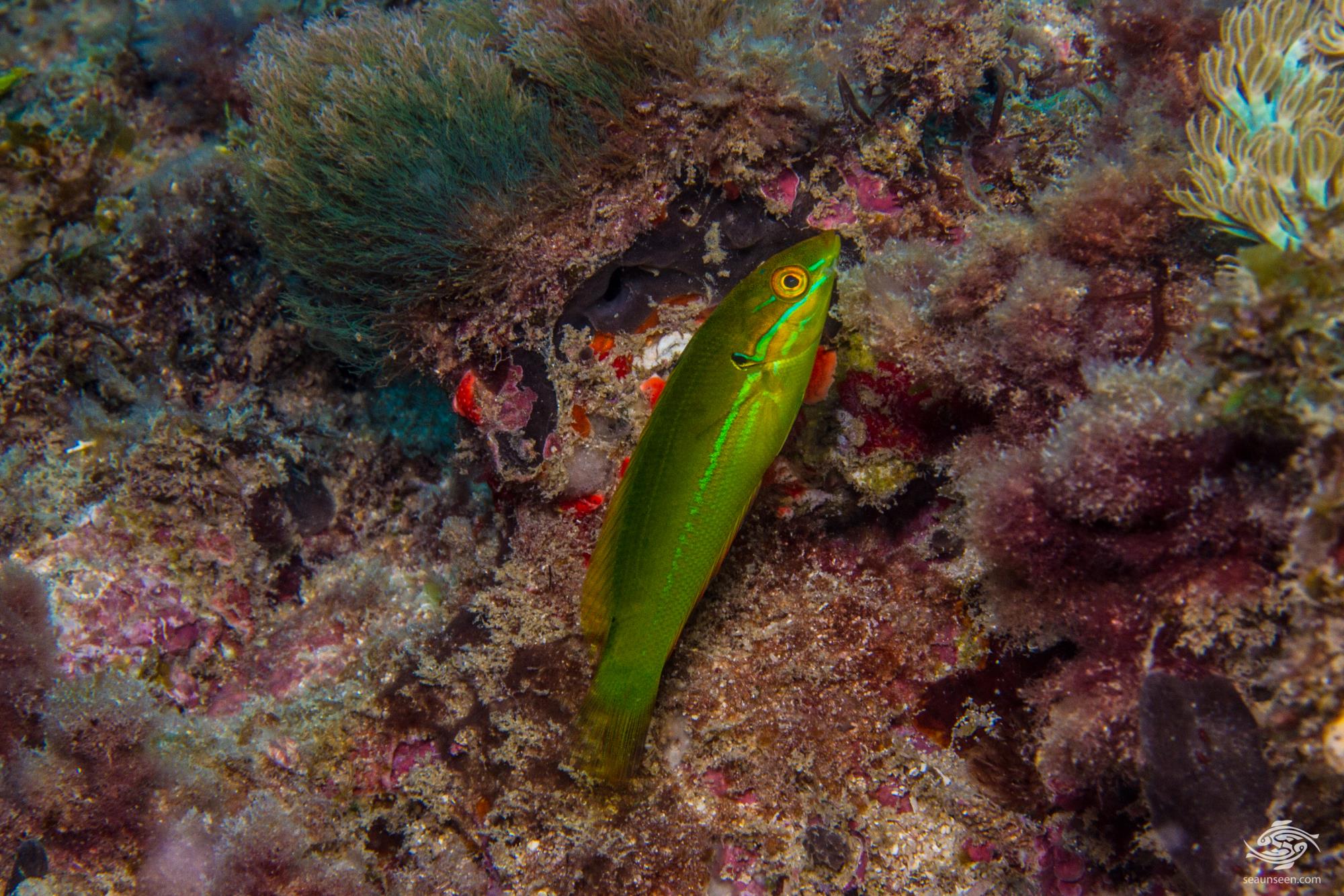 The Spot-tail Wrasse  is fairly common in Tanzanian waters, both on reefs themselves and on surrounding rubble. The juveniles are sometimes seen in small groups of two or three but as they age so they tend to become solitary.  Generally there will be several females in an area and one male. We have never seen two males together but often see two juveniles or a juvenile and a female together. They are fairly fast moving fishes and will usually swim low on the reef not far from cover. 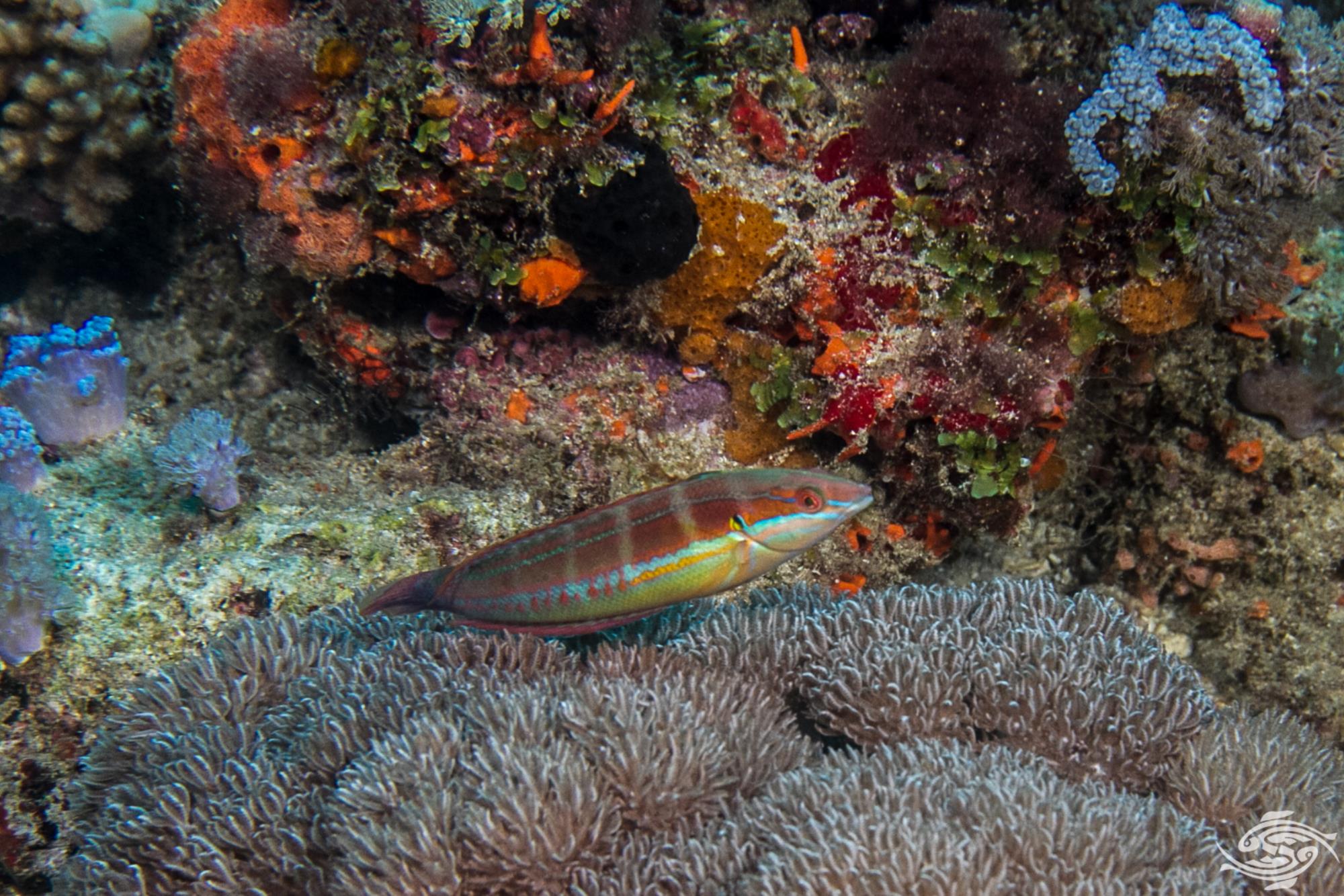 The Spot-tail Wrasse is found across the Indian Ocean into the west Pacific, on the north west Australian coast and north to Sumatra and Bali. 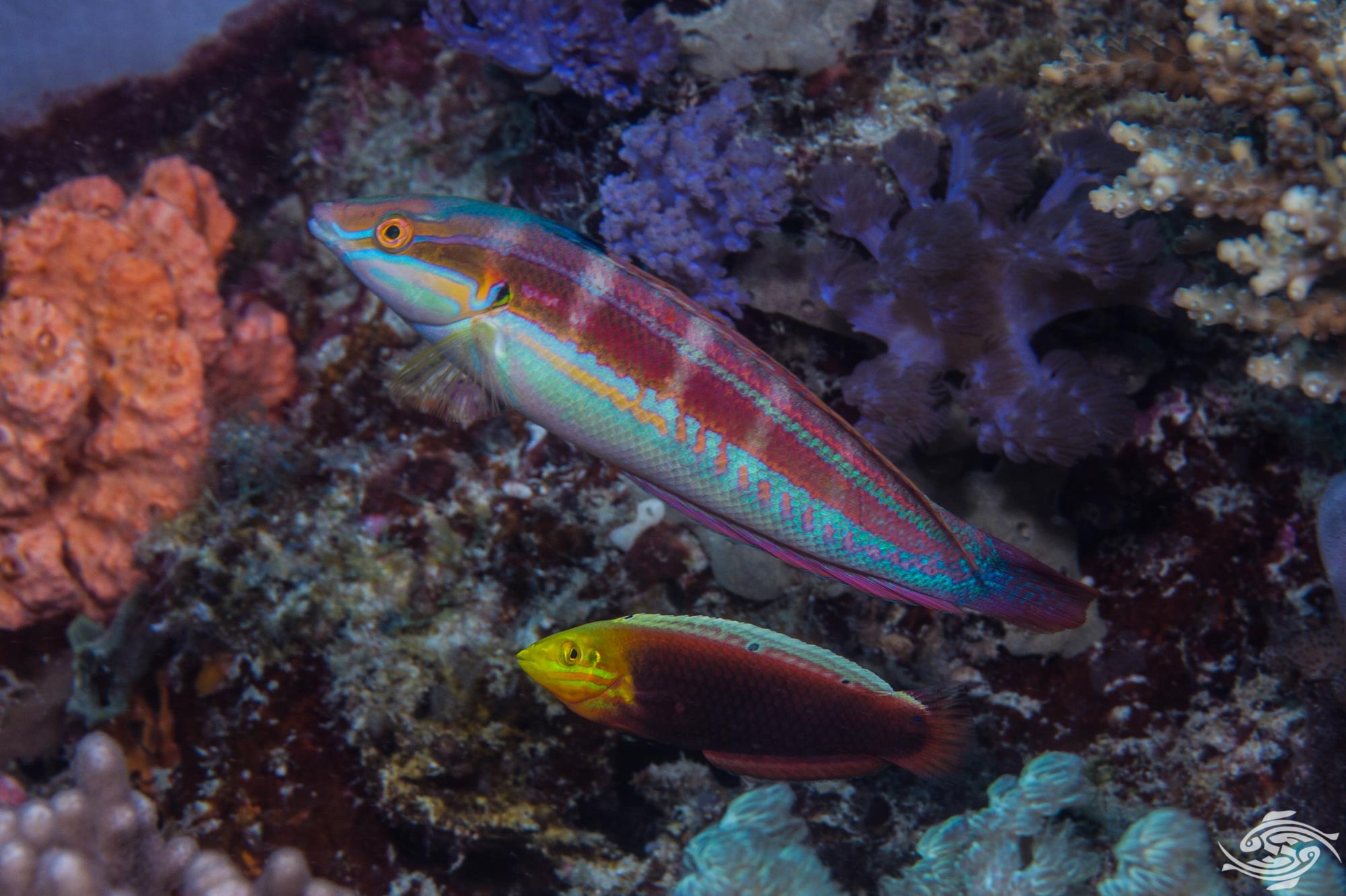 The Spot-tail wrasse feeds on small crustaceans, molluscs and other benthic organisms. 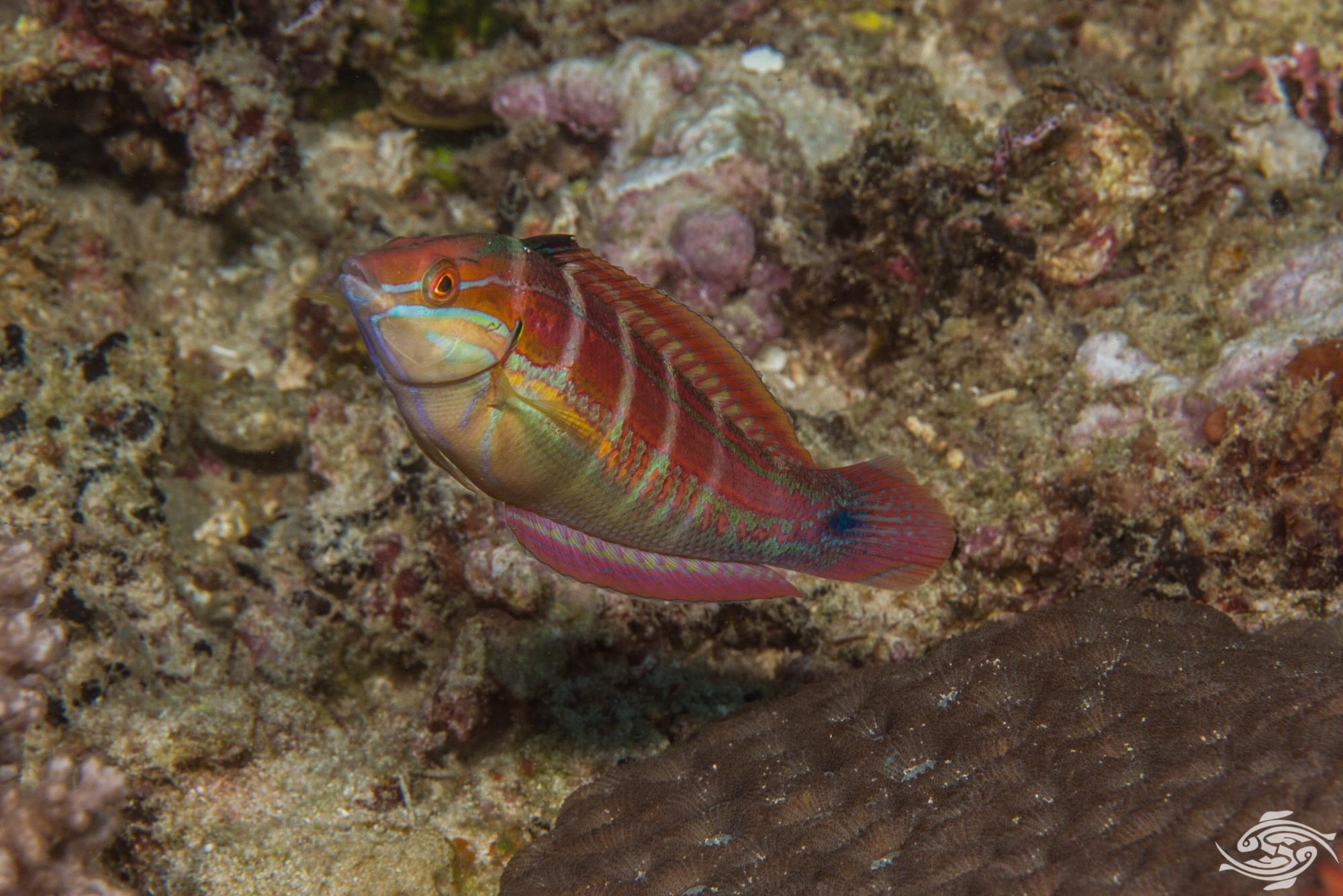 Little seems known of their mating habits, there are usually several females in an area and a single male that constantly moves around his territory. 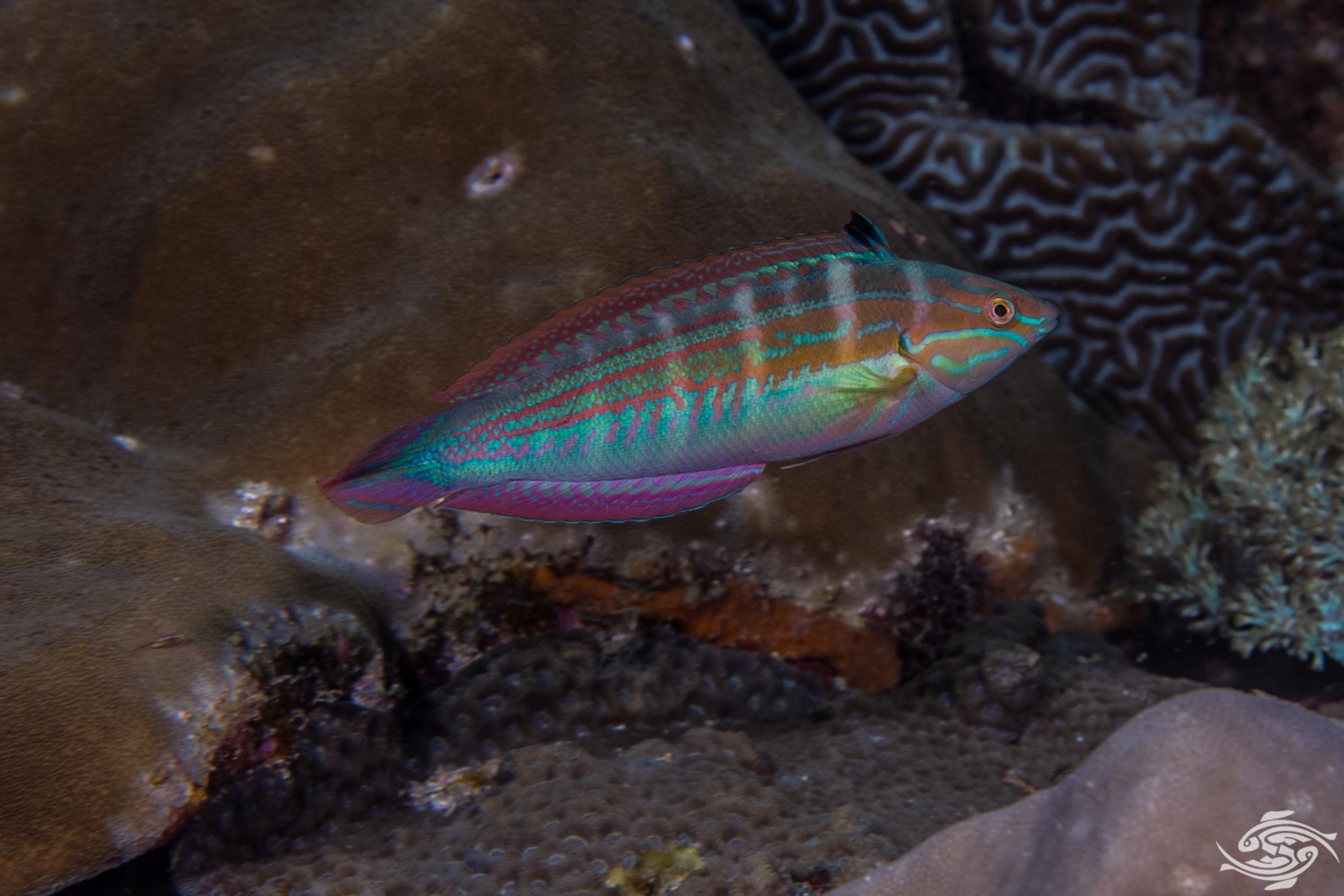 Spot-tail wrasse are kept in aquariums, usually by individuals who catch their own fish. They do not seem to be marketed commercially or certainly not on a large scale. As with many wrasse they will bury themselves in the sand when threatened and will only emerge once the are comfortable.  By all accounts they are relatively easy to keep but will probably not be reef safe and may become territorial. 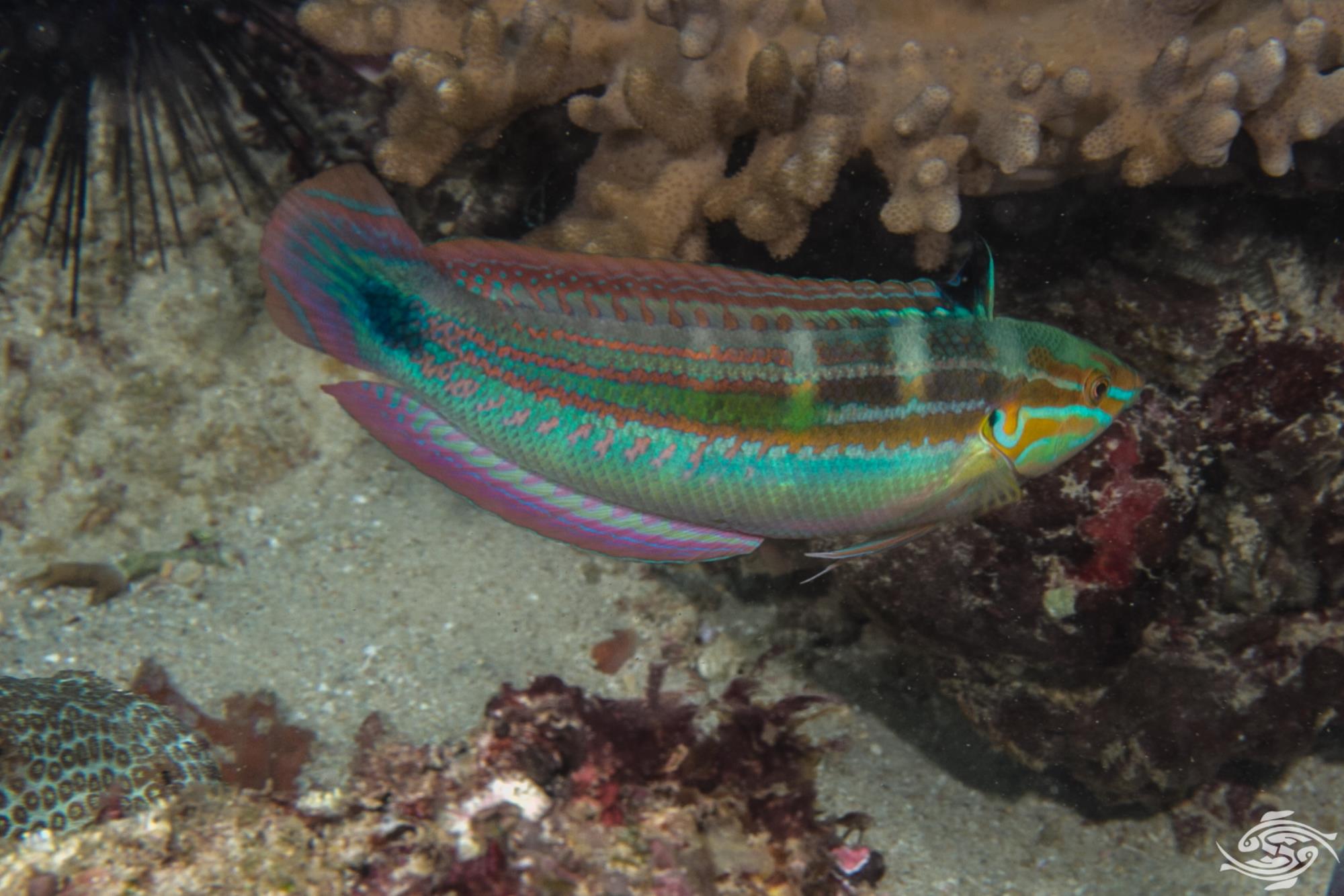 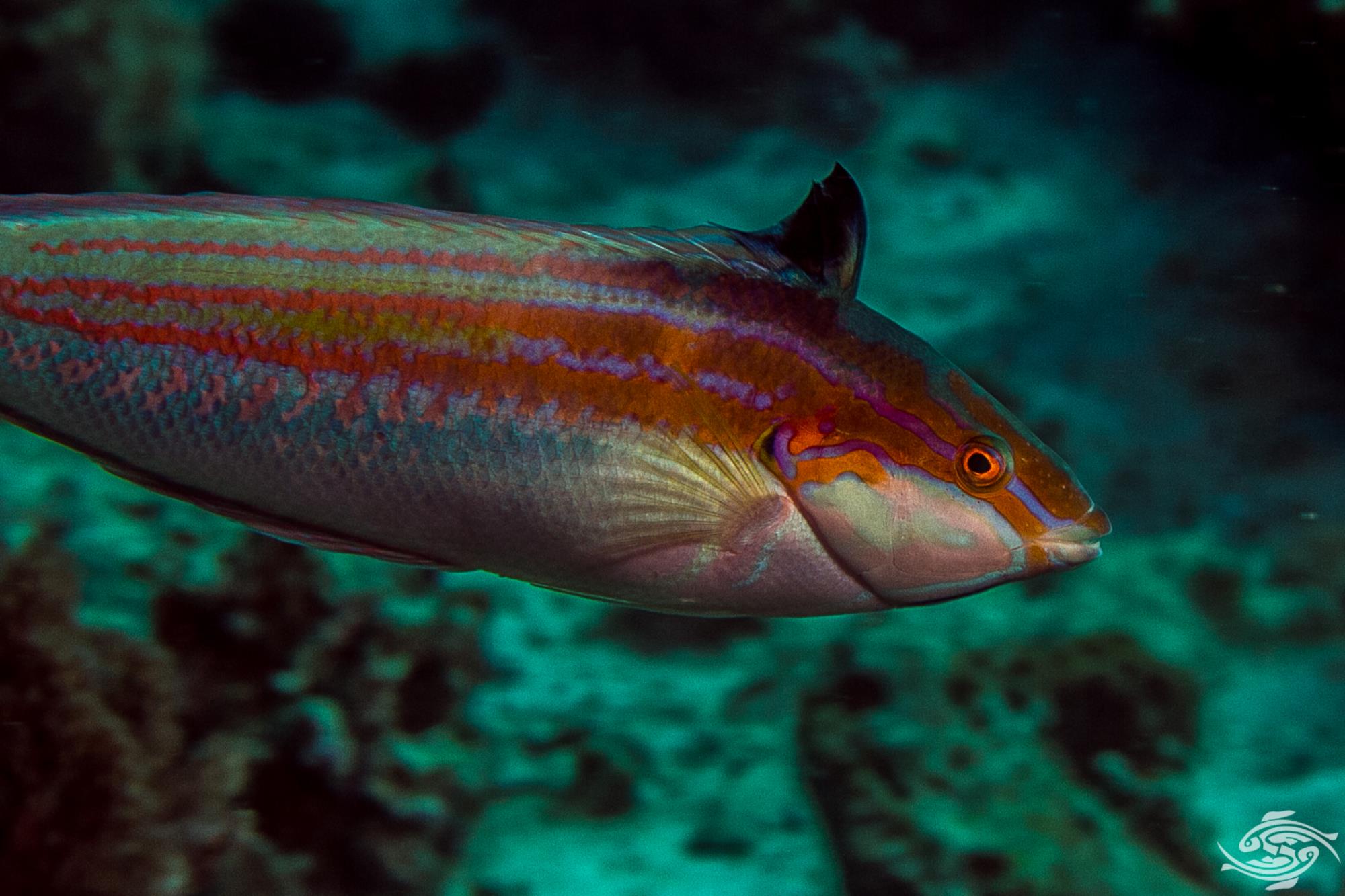