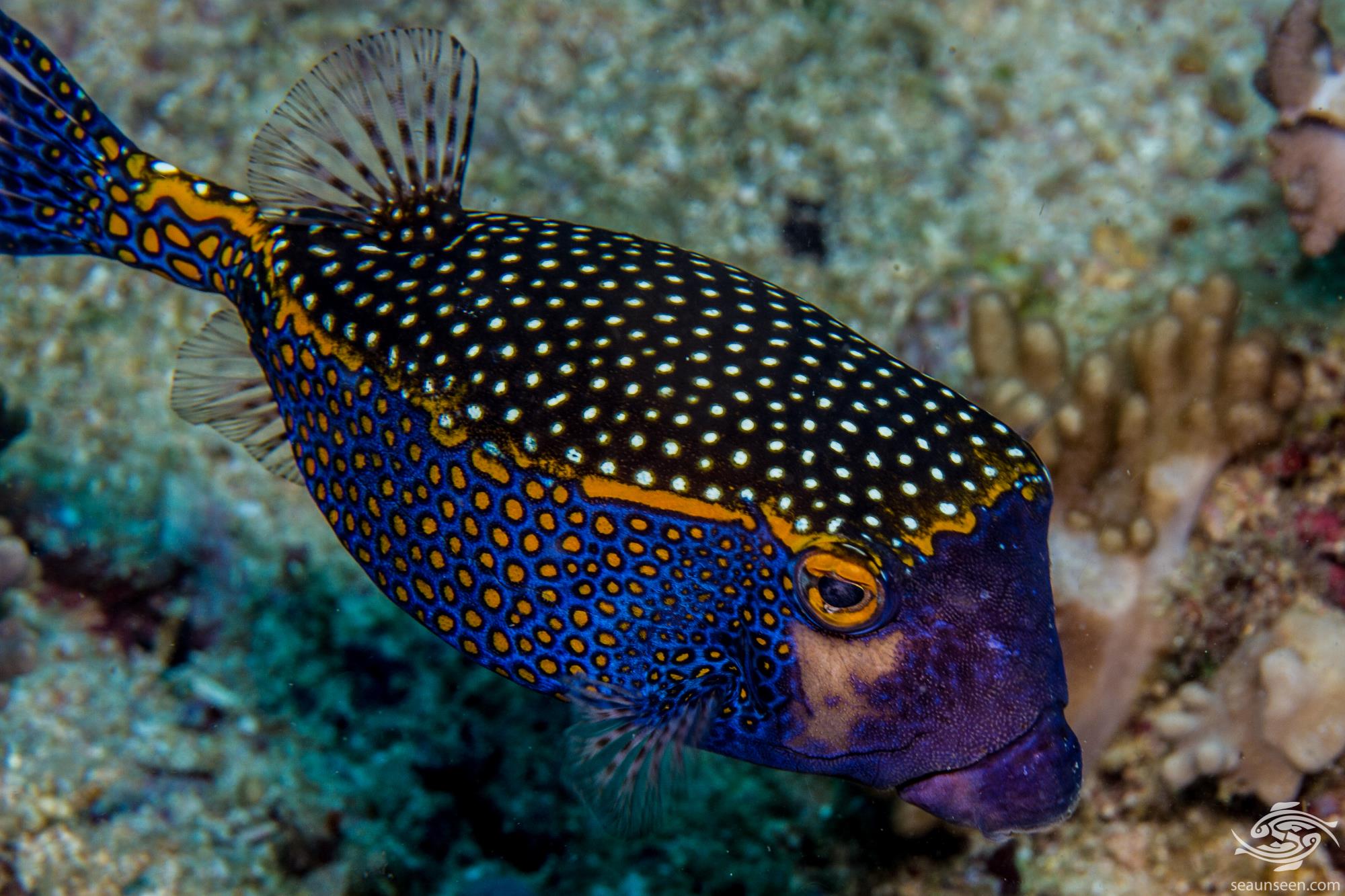 The White spotted boxfish (Ostracion meleagris) is also known as the spotted boxfish, blue boxfish and black boxfish. The variation in names is because that the fish has strong sexual dimorphism, the male and female have very different colouration. This can be seen in the image of the male above and the female below.

Boxfish are closely related to Pufferfish or Blowfish which have symbiotic relationships with poisonous bacteria. These bacteria are found in their skin and some organs and provide them with protection against predators.   Boxfish have a slightly different strategy and when threatened excrete a poisonous slime from specialized cells.  They advertise this toxicity by being brightly colored, a strategy known as aposematism.  There is a very interesting article here on the mechanism that the poison seems to use, namely attacking the red blood cells of the predator via the gills. 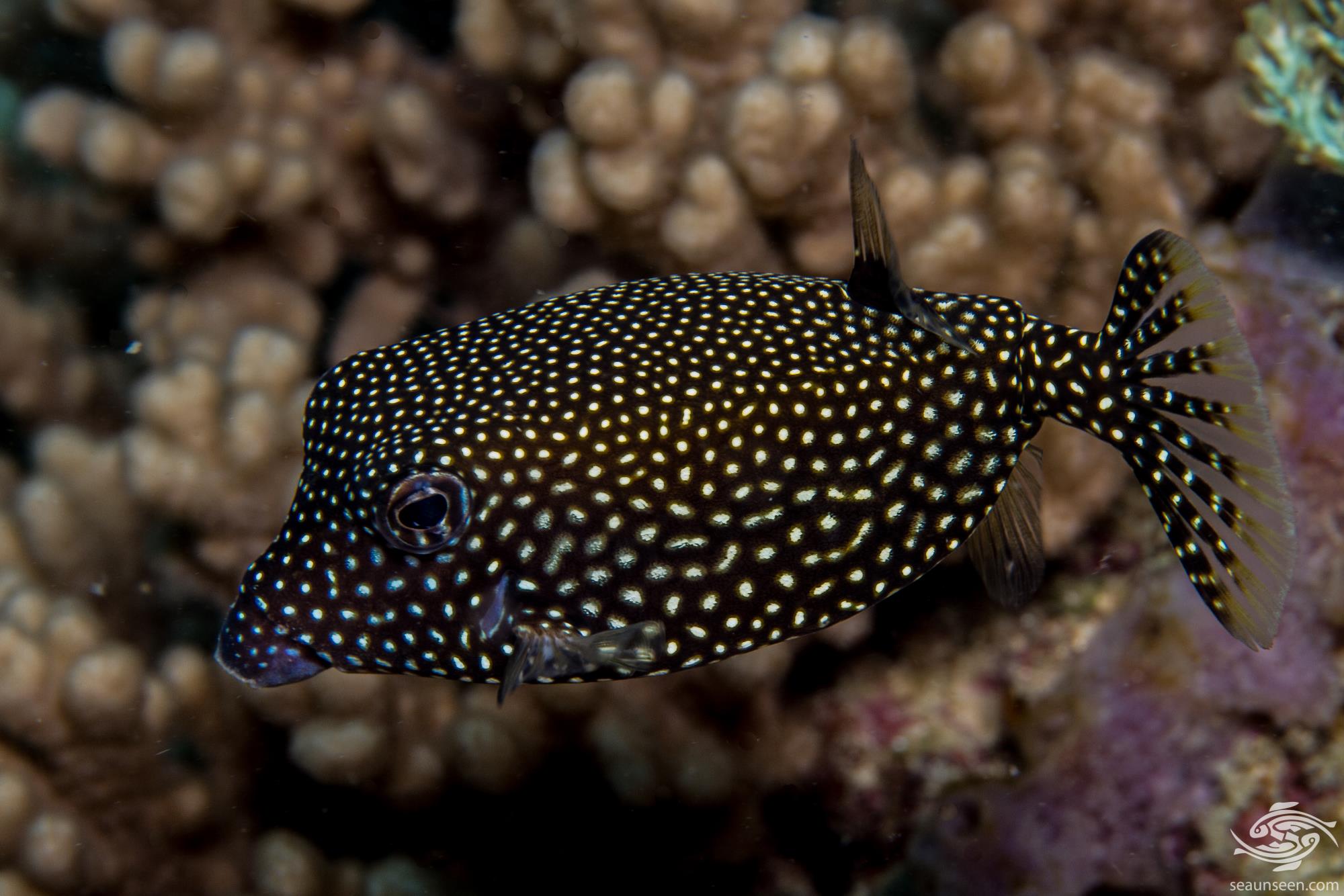 For further protection their plate-like scales are fused together to form a solid box-like carapace and the fins, tail, eyes and mouth protrude from this. Due to the armor, the fish are slow moving and rely on their pectoral fins for propulsion. As with most box fish the white-spotted box fish is quick to hide in any convenient hole when approached and will often turn once in its hiding place, hovering in position to view the diver.

The male is by far the more colourful with a blue lower body and a yellow line around the upper body.  The top is black with white or yellow dots.  The female is entirely black with whitish / yellowish dots. Juveniles with male coloration are not known and either the males develop their colors as they grow or the fishes are all born female and have the ability to change sex. They grow to roughly 15 centimeters (5.9″) in length.

White spotted boxfish are found across the Indo pacific area mainly in lagoons and on seaward and protected reefs from a depth of 1 to 30 meters. They live in small haremic groups with one male to several females and forage on their own. The males are territorial and will attempt to chase off other males. The juveniles are often seen in the spines of urchins. 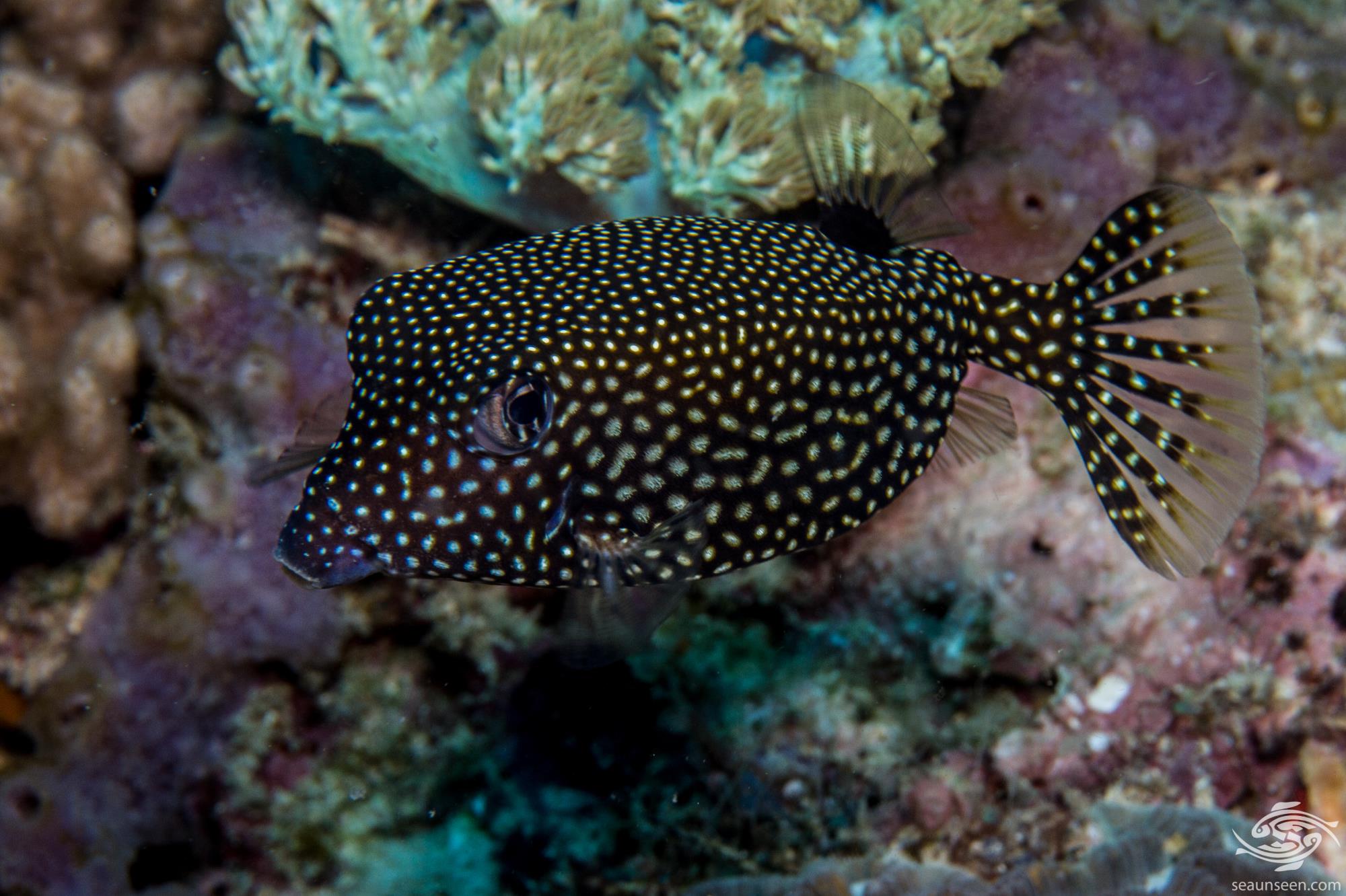 Their diet consists of sponges, worms, tunicates as well as other small invertebrates. 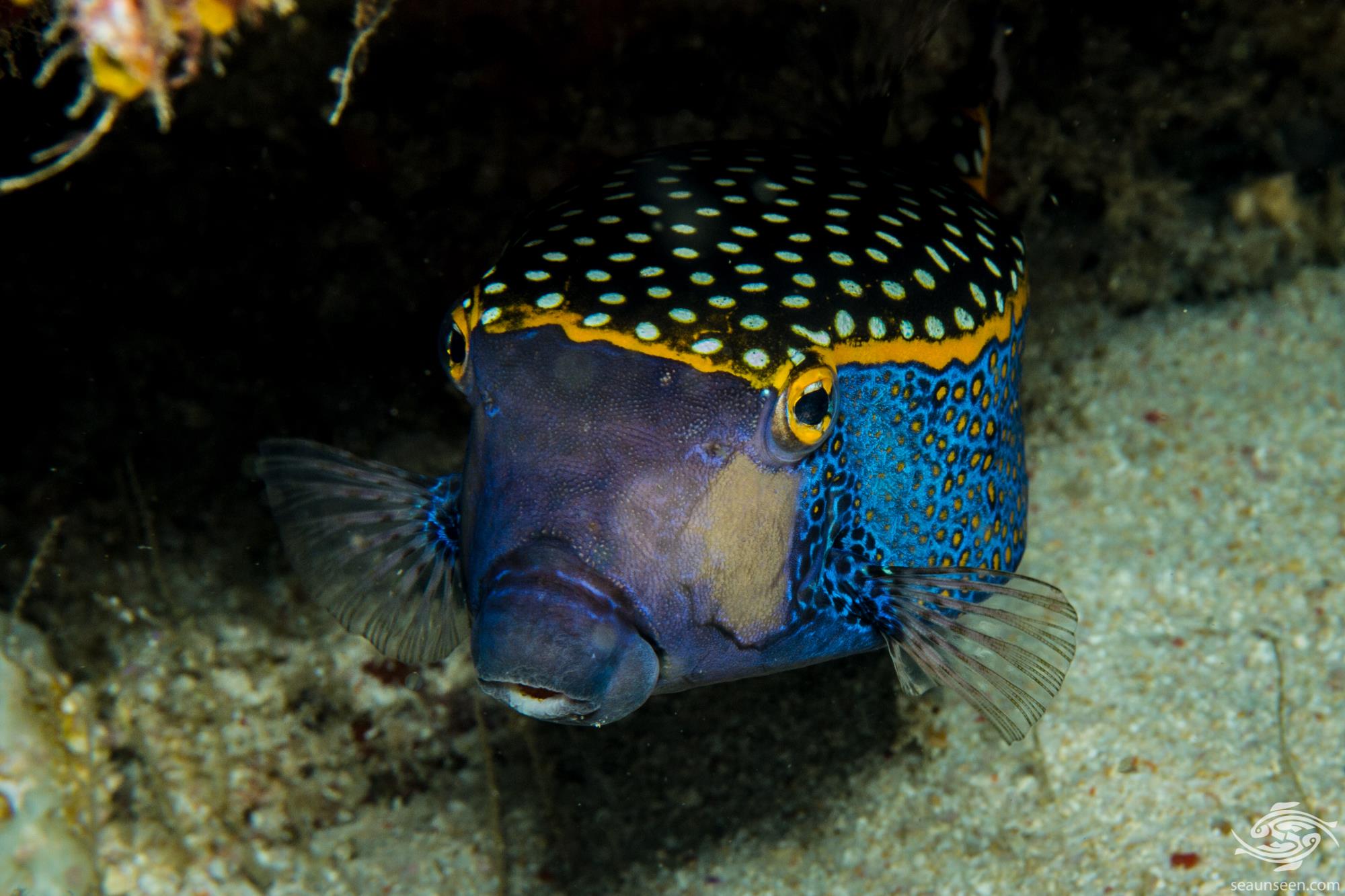 The males are territorial and will have several females in their territory. Spawning has been observed and takes place several feet above the reef. The male approaches a female and bumps her. If she is receptive she will follow him upwards. The eggs are released into the water table. Juvenile males are never seen in the wild. Either the juvenile male starts off looking like a female or they are sequential hermaphrodites. In the image below it appears as though the specimen is part way through the change from male to female supporting the theory that they are sequential hermaphrodites. 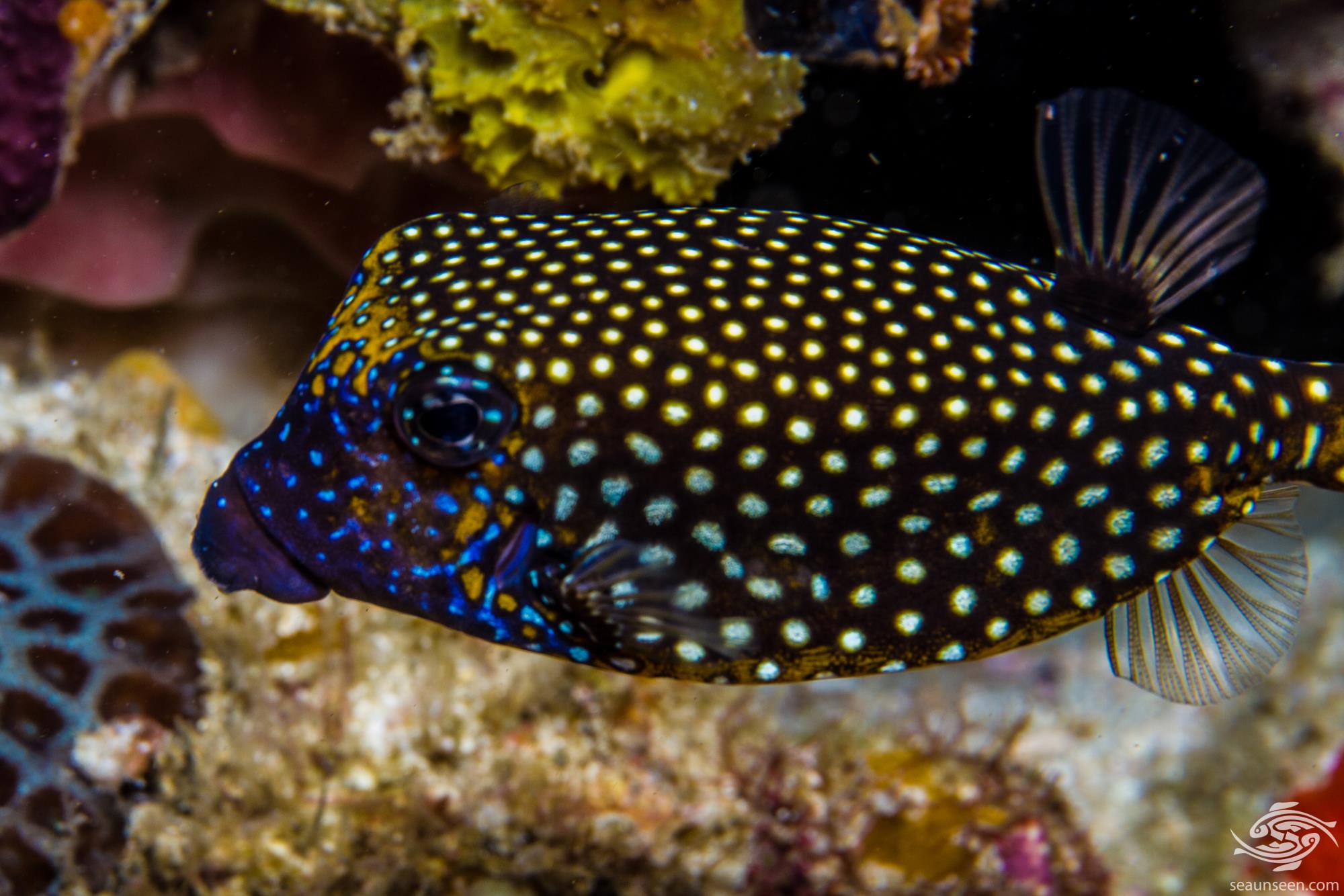 Males may fight with each other in the presence of females. 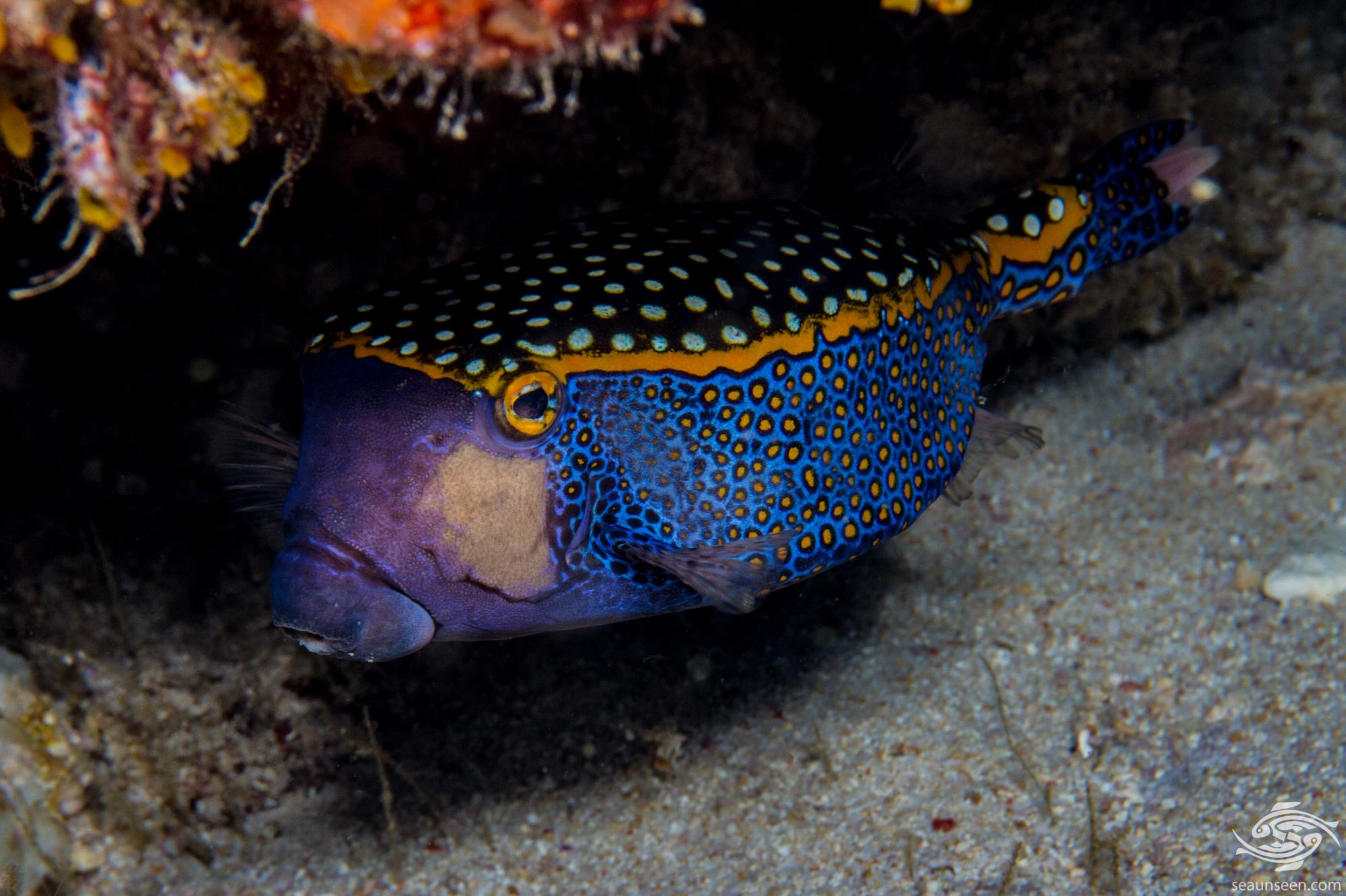 White spotted boxfish have the reputation for releasing toxins into an aquarium and should only be kept by experienced aquarists as they can easily destroy an aquarium. Sudden movements or loud noises can easily stress them. For aquarists who decide to take the risk of keeping this particular species of boxfish, they should ensure that the boxfish is not stressed in any fashion by other fish. That said, boxfish have a lot of character and can be fun fish to have in a particular type of aquarium. They reportedly learn to jet water into the air at feeding time. They are relatively easy to move onto frozen foods, flakes and algae. 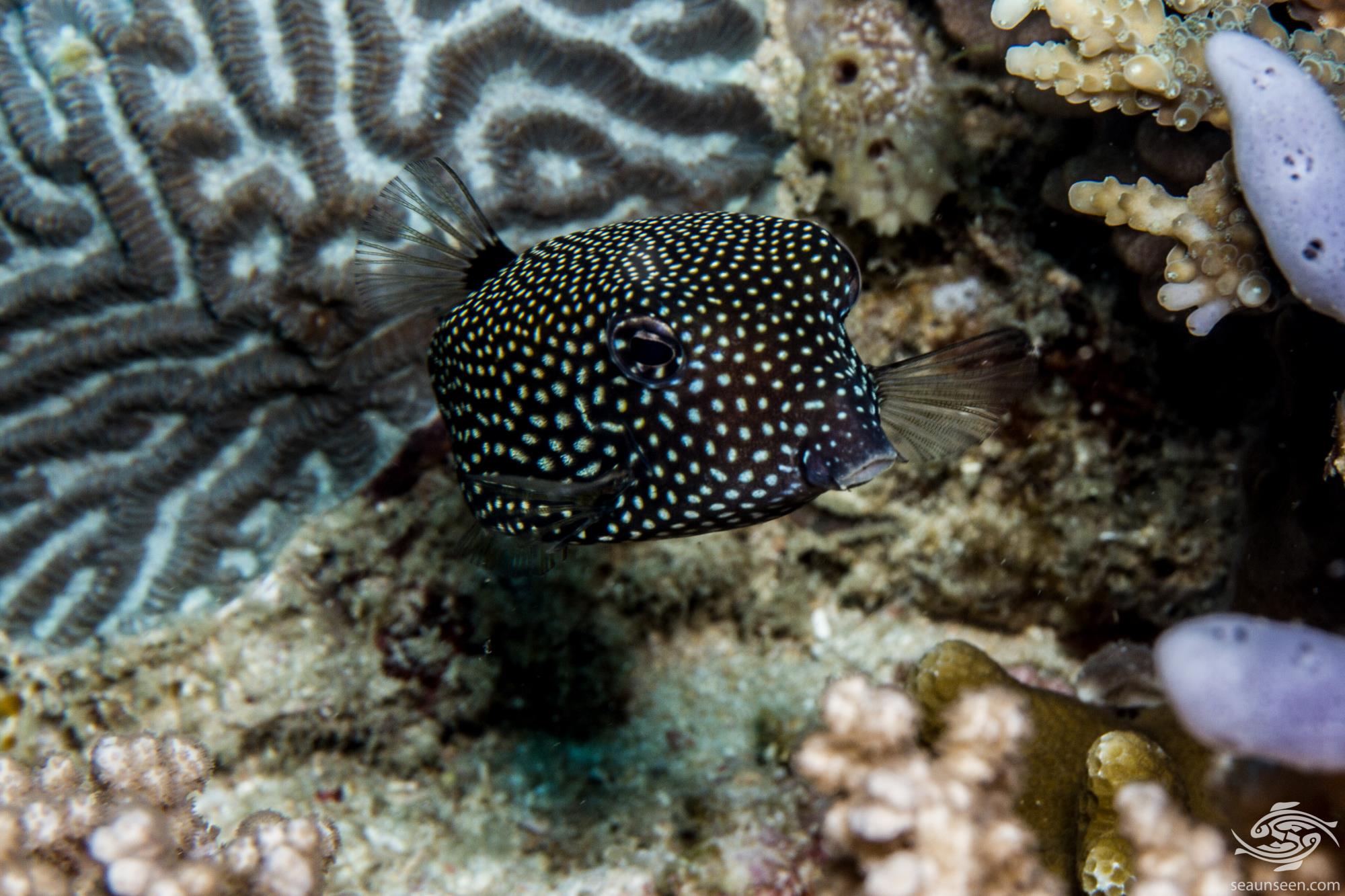