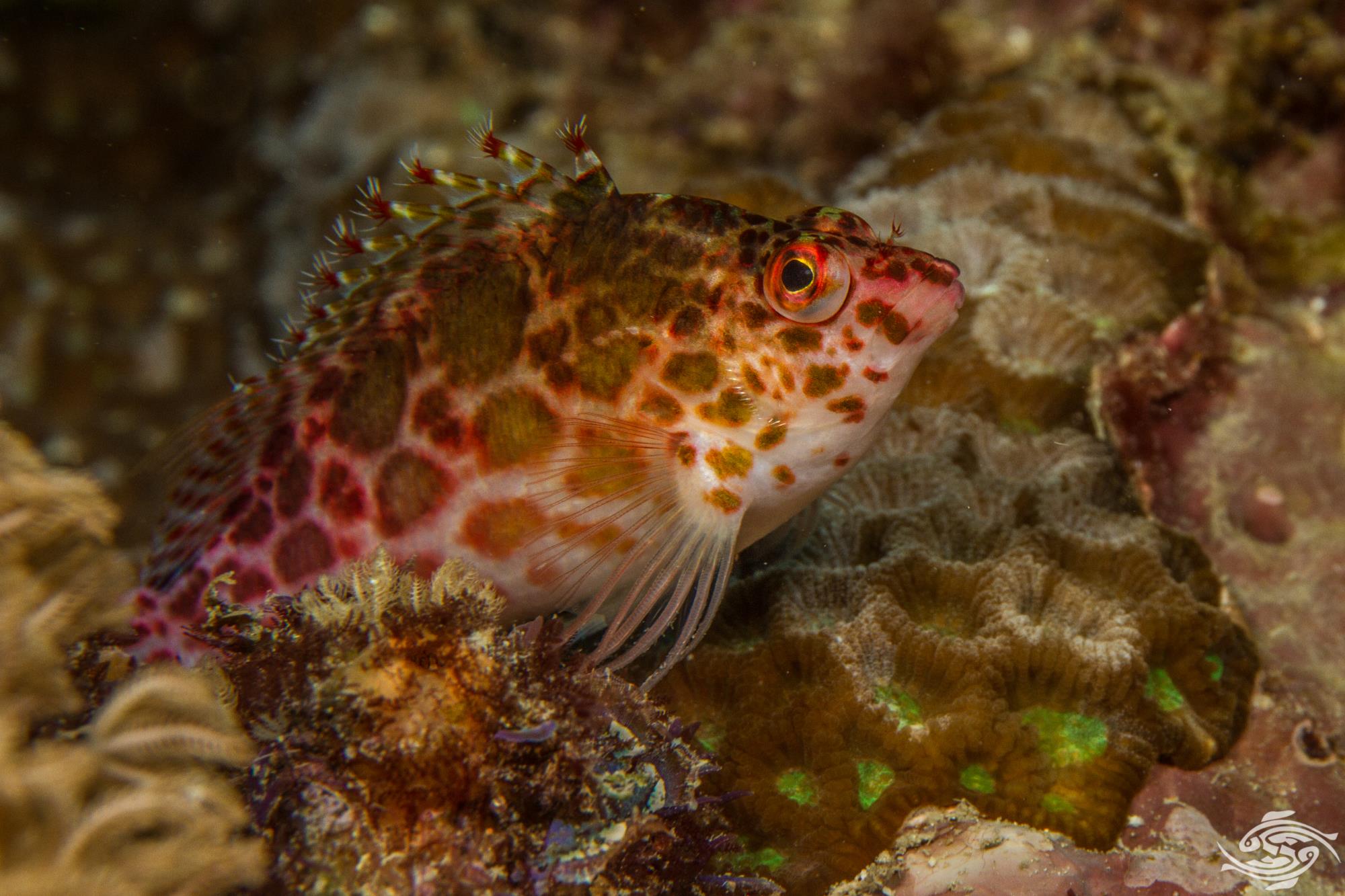 The Spotted Hawkfish Cirrhitichthys oxycephalus, is also known as the Pixy Hawkfish. As with other hawkfish they have a habit of sitting in strategic raised spots on the reef, with their head sticking out. From there they view their territory and pounce down on unsuspecting prey, very much as a hawk would, hence their name. In Tanzanian waters they are the most common Hawkfish. 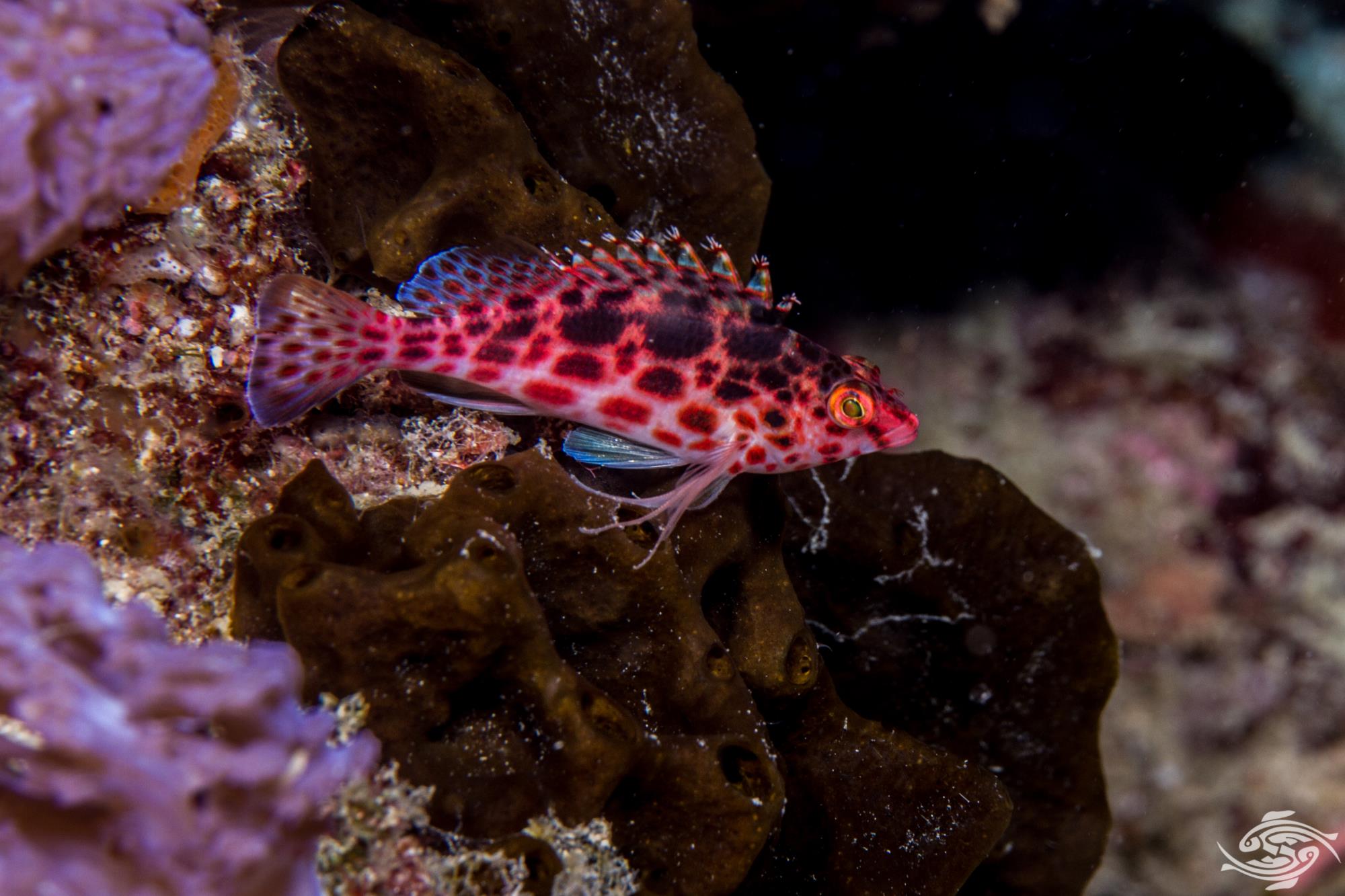 The spotted hawkfish is a white color with irregular red brown spots on the body and tail.  Some specimens are more of a red color whereas others have light brown spots. This can be seen in the images below. Tufts of cirri are found on the top of each dorsal spine. The tails are rounded and truncated, the pectoral fins are comparatively large and are without scales. They can grow up to 9 centimeters but are seldom seen this size in the ocean. They are very similar in looks to the Pale Tail Hawkfish ( Cirrhitichthys aprinus) but can easily be distinguished by the lack of spots on the Pale tail hawkfish. Some specimens seem to have a blue tint on the dorsal fins and this may be a sexual colouration. This can be seen in the image above. 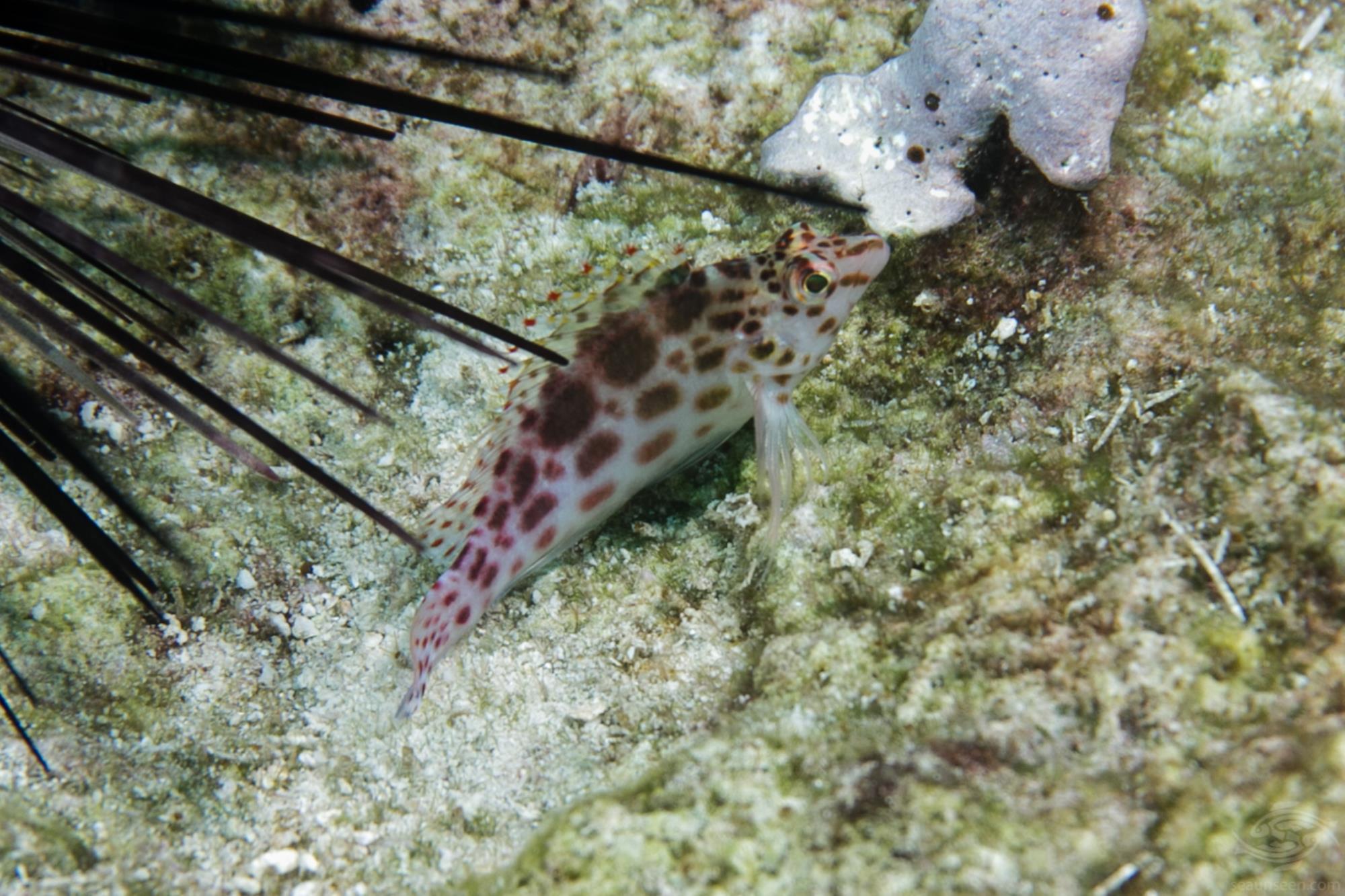 With large and skinless pectorals, spotted hawkfish, are able to perch on corals which would often sting other fish. This provides them a measure of protection on their perches. They are usually always solitary and will defend their territory against others of their species. On very rare occasions two may be seen together. Males which are slightly larger than females maintain a territory surrounded by a harem of females. They are slightly more reclusive than the other larger Hawkfish and are quick to go into hiding. 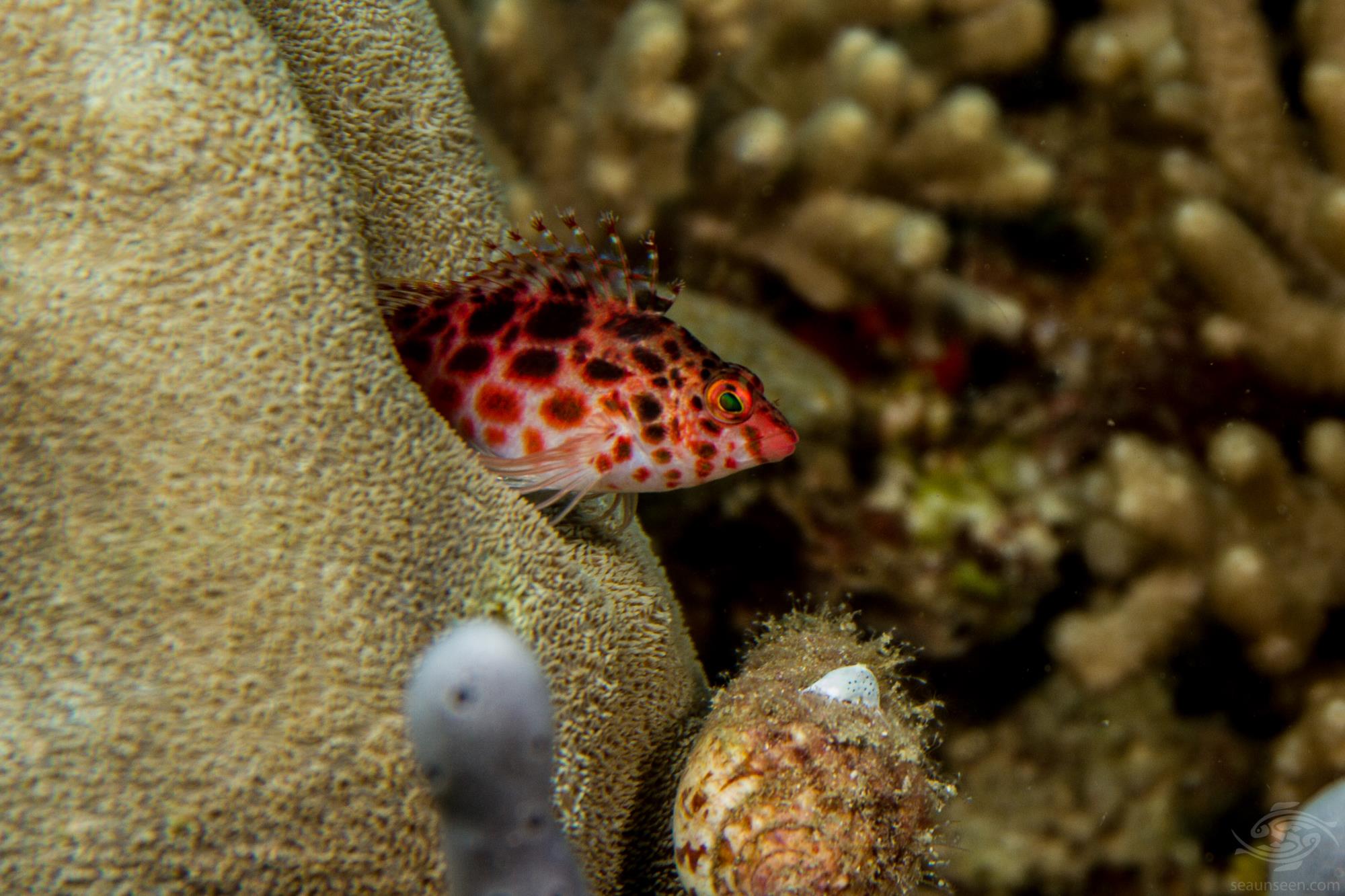 Spotted Hawkfish are found across the Indo Pacific area mainly on coral reefs. 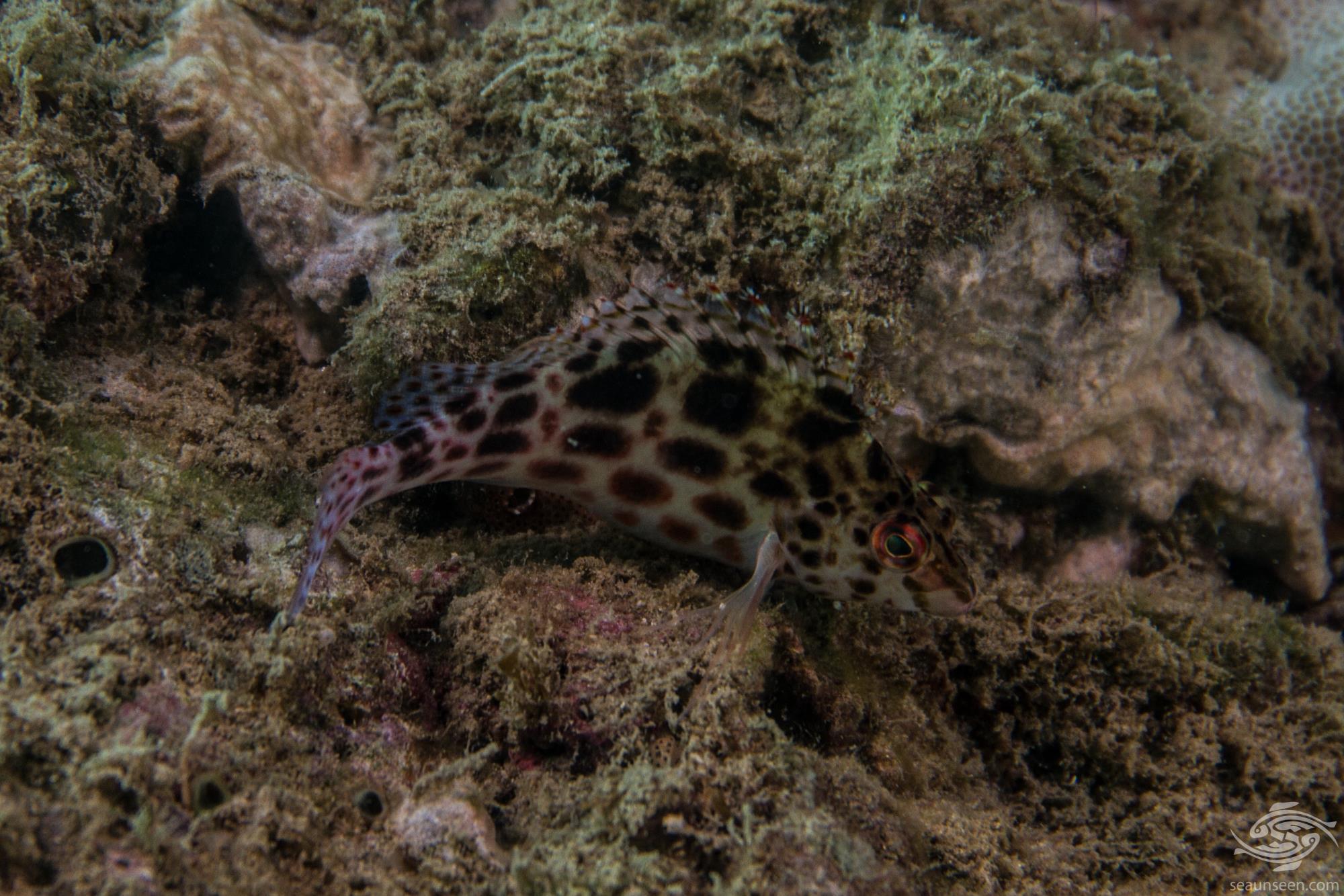 This fish is a predatory carnivore as its name suggests and its main diet consists of small fishes and crustaceans, such as shrimps and crabs. If one sits and watches them, they regularly dart into the 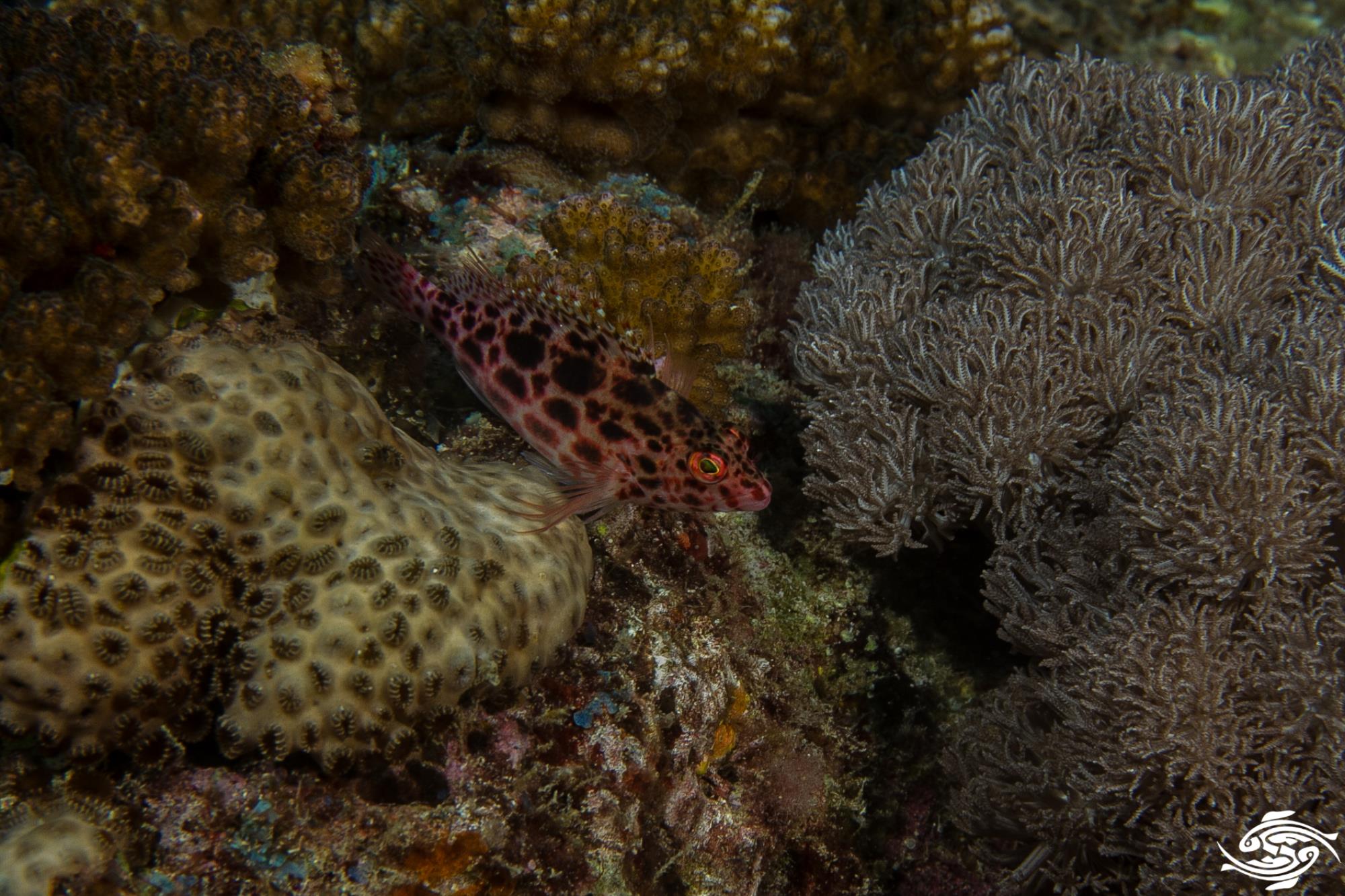 Spotted hawkfish are easy to keep and are ideal for beginners. Note that they actively hunt crustaceans and smaller fish, so it should be the last fish introduced to a semi-aggressive to aggressive community of fish. The Spotted hawkfish is highly territorial and will harass new aquarium additions including other hawkfish as well as fish that are much larger than itself. Their diet in an aquarium should include a variety of marine meats, frozen preparations, and live feeder shrimp. 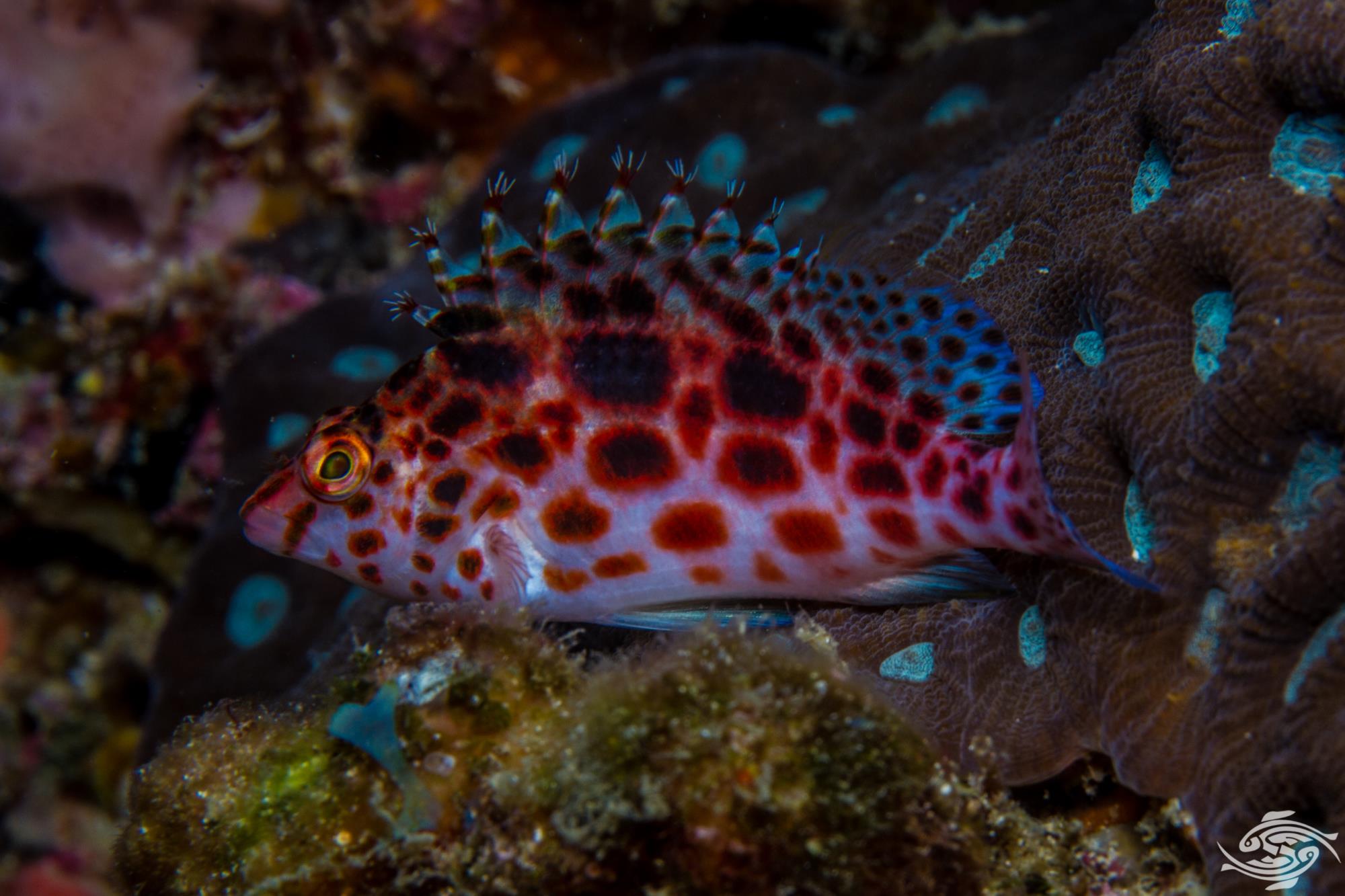 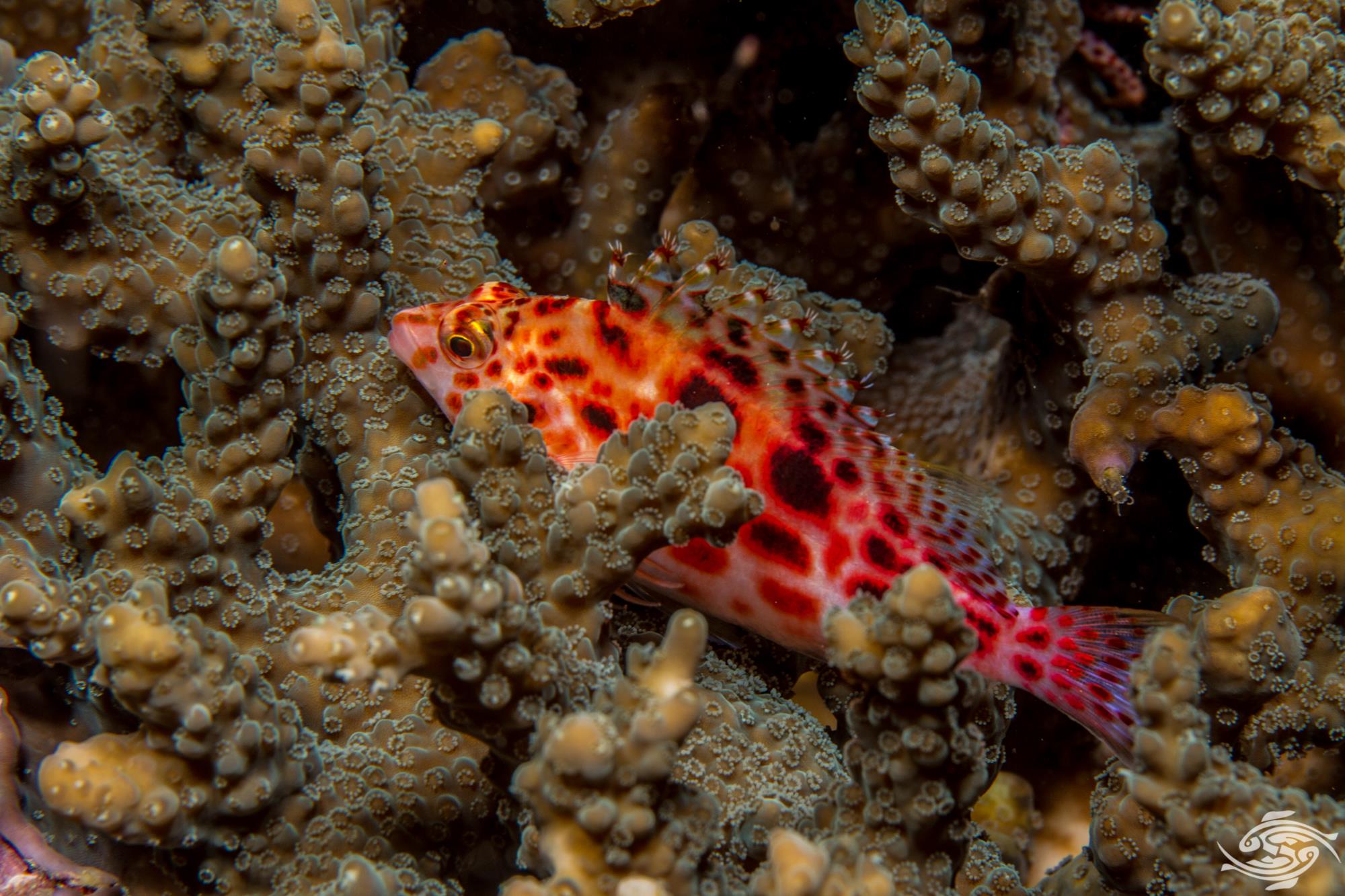 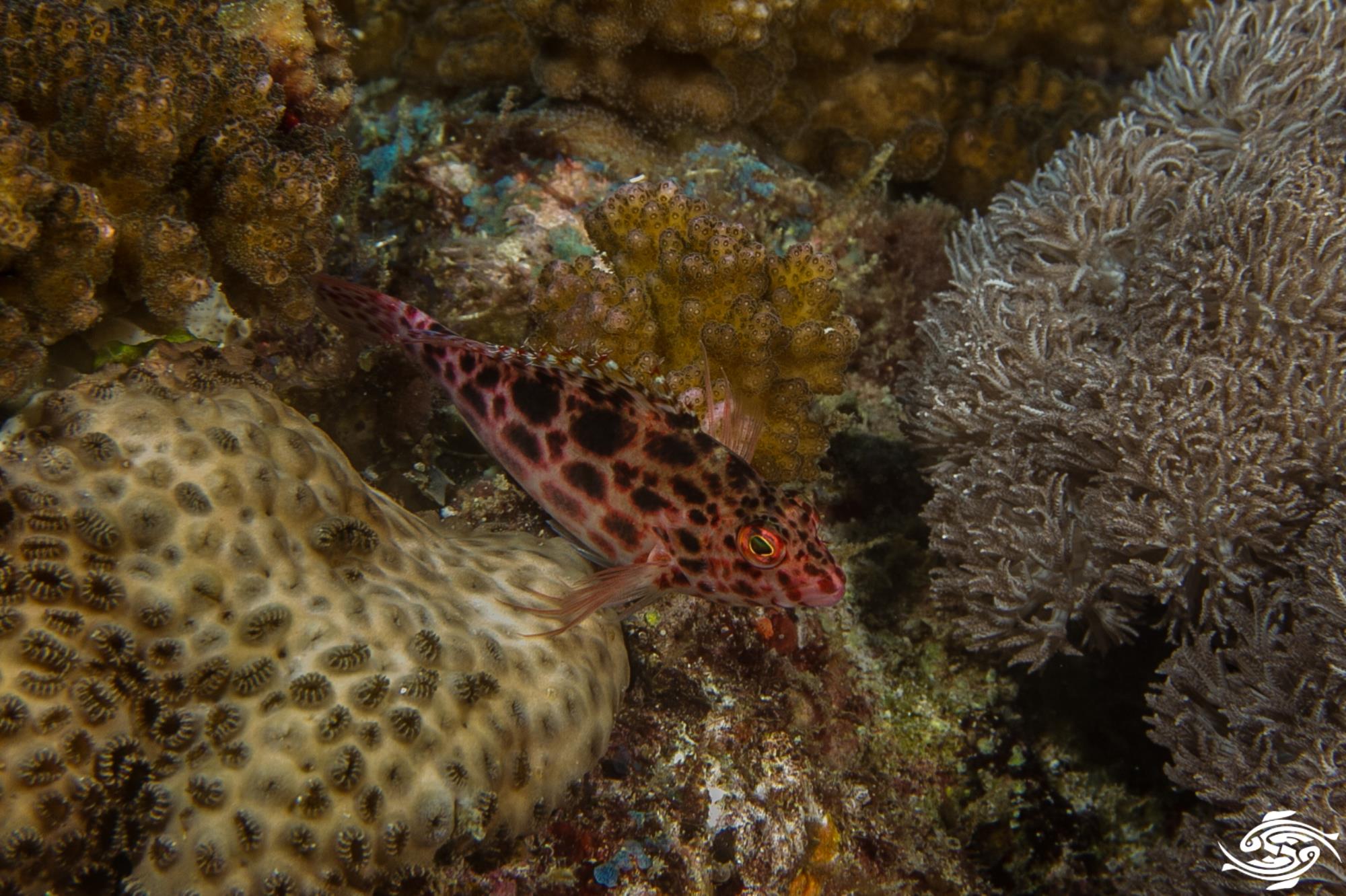 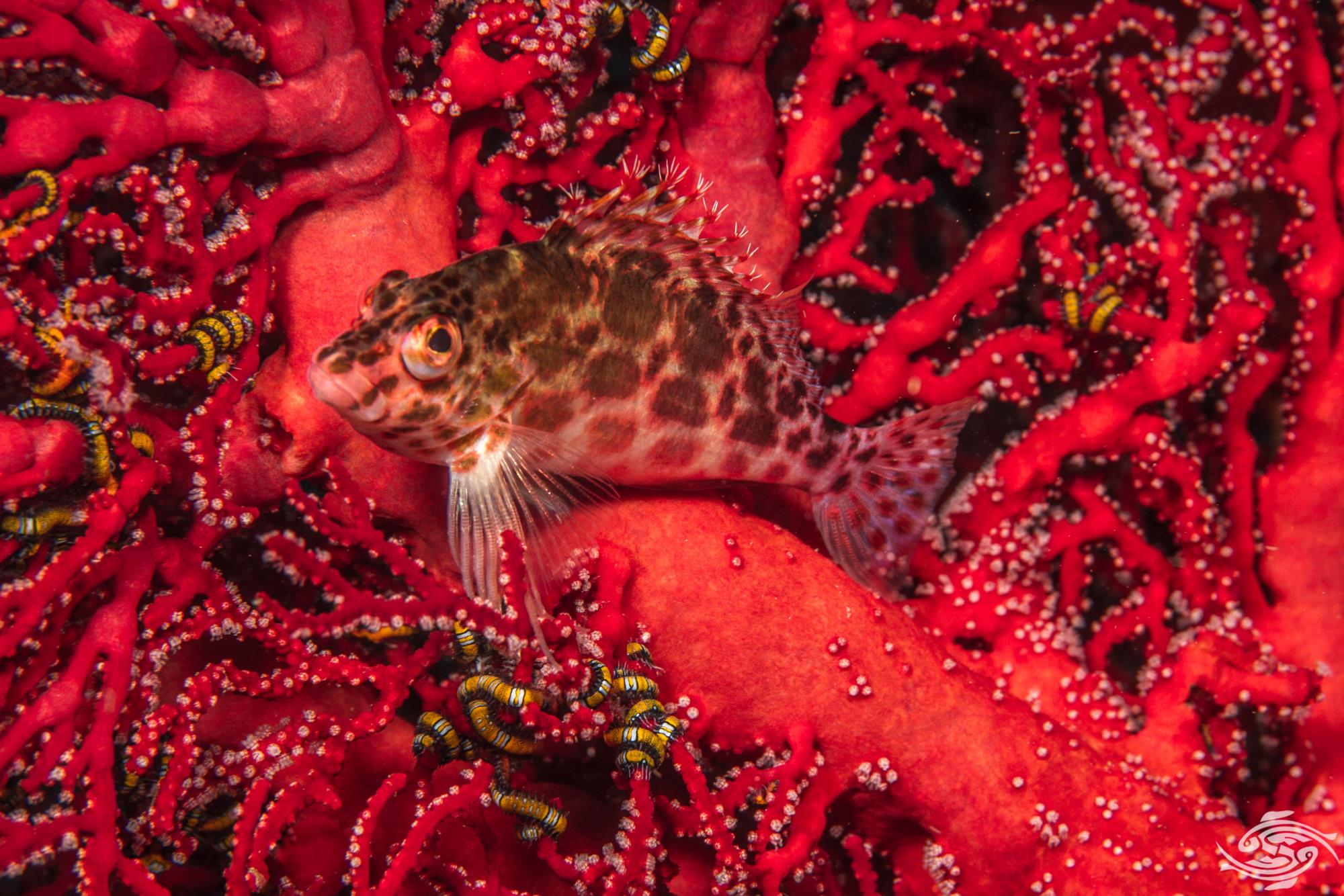