The Squat Shrimp-Facts and Photographs 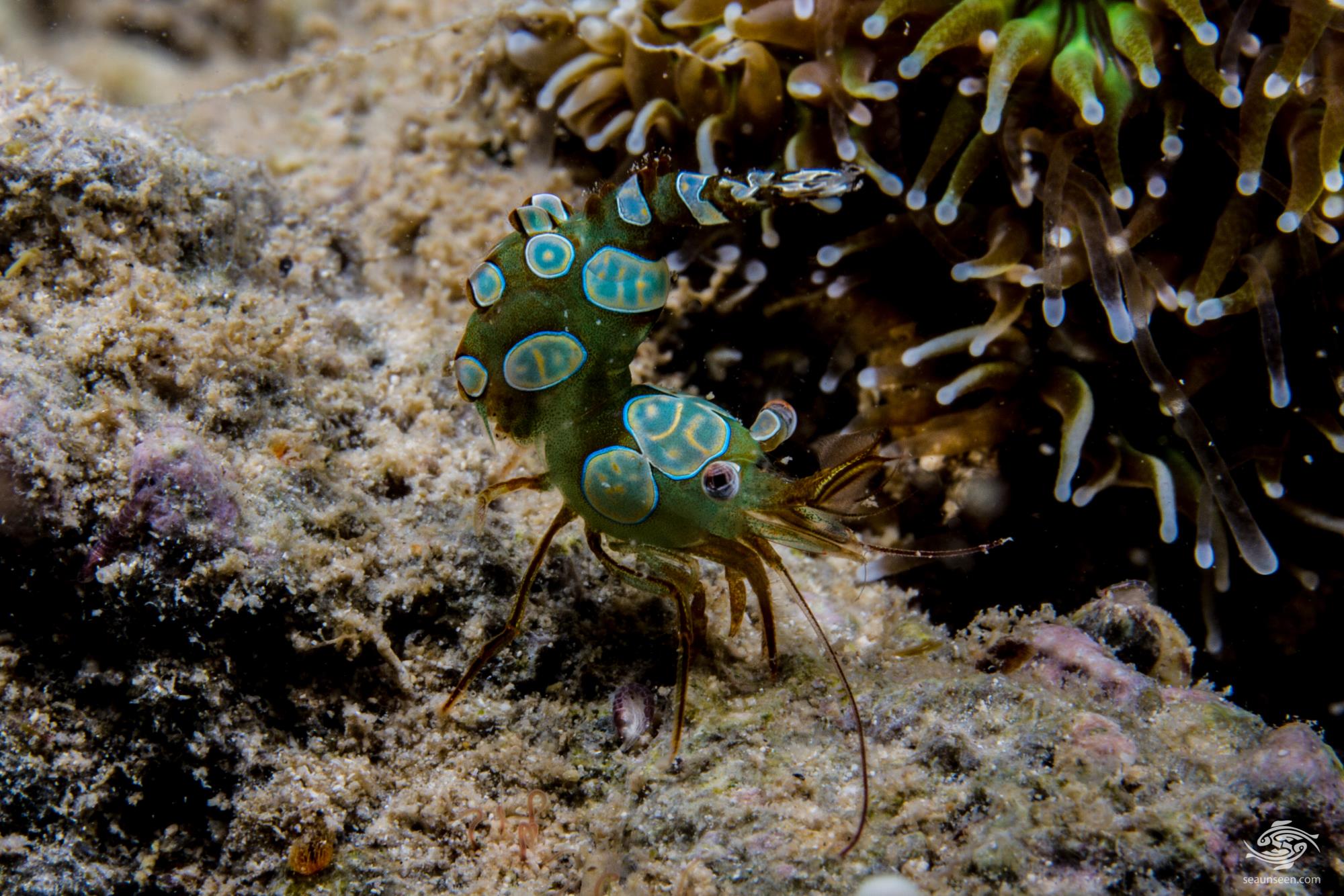 The Squat Shrimp (Thor amboinensis) is also known as the Sexy Shrimp. They are small colorful shrimp that form a comensual relationship with various species of anemone. They have a habit of holding their abdomen above their head and wagging the tail giving them one of their common names.

In East African waters they are commonly found around and in Carpet Anemones, in particular Haddons Carpet Anemone (Stichodactyla haddoni) and the Adhesive Anemone (Cryptodendrum adhaesivum). We have also found them around and on the Beaded Anemone ( Heteractis aurora)  and the Bubble-tip anemone. 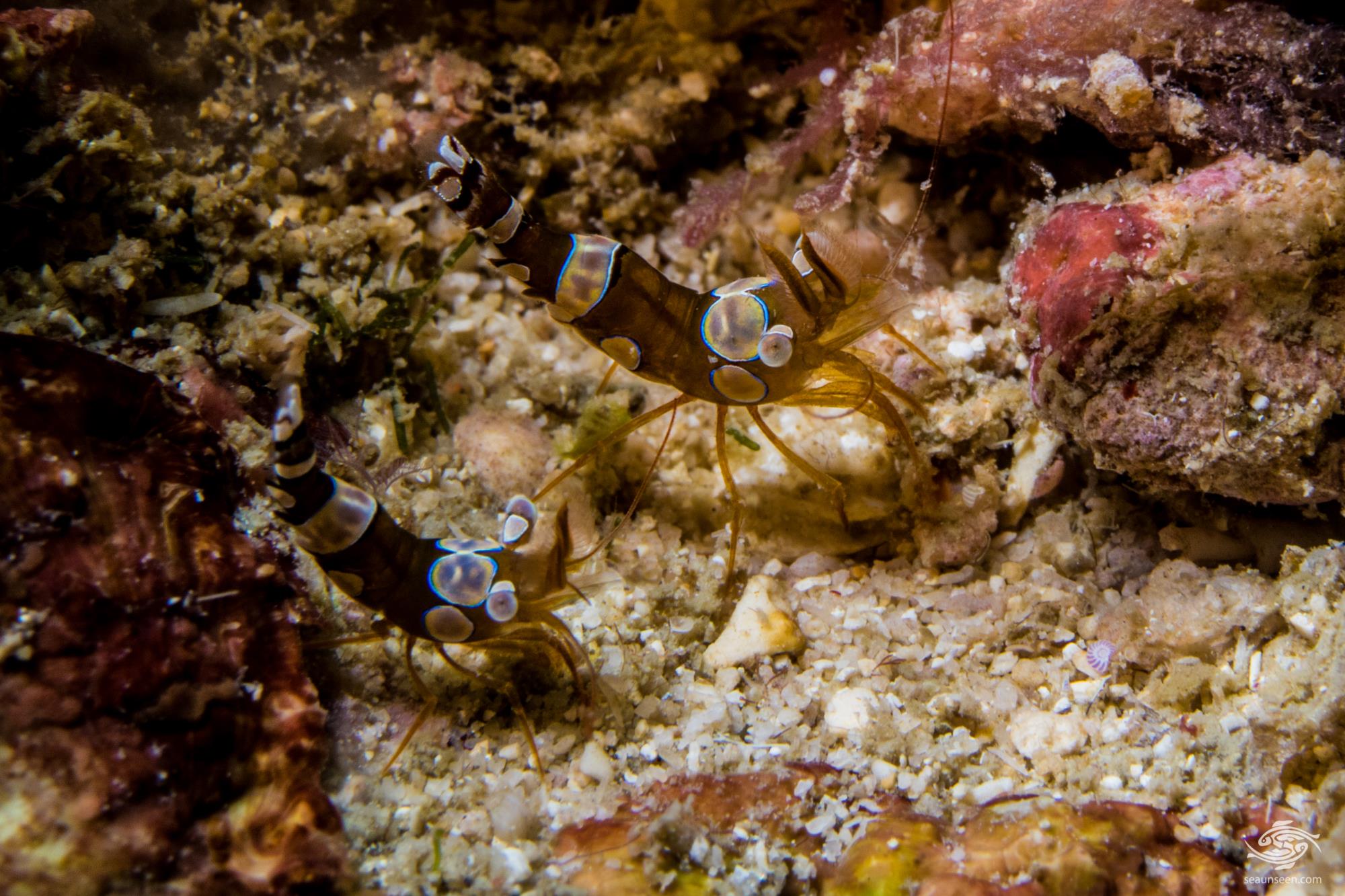 The Squat Shrimp has a maximum body length of 13 millimeters. The usual base body color is a light brown color but in Tanzania there are also specimens with a green colored body as can be seen in the images.  On these green specimens there are irregular blue circular marks on the body that are ringed in white and yellow. In the center of these marks there are  yellow lines and dots. On the brown coloured specimens the colours in the center of these marks is slightly different.

There are two or sometimes three similar colored bands around the tail area and the tail fan has similar coloured markings on the top and the bottom. There are three sets of walking legs and a set of legs with small pincers known as chelipeds and a proportionally longer set of feelers. 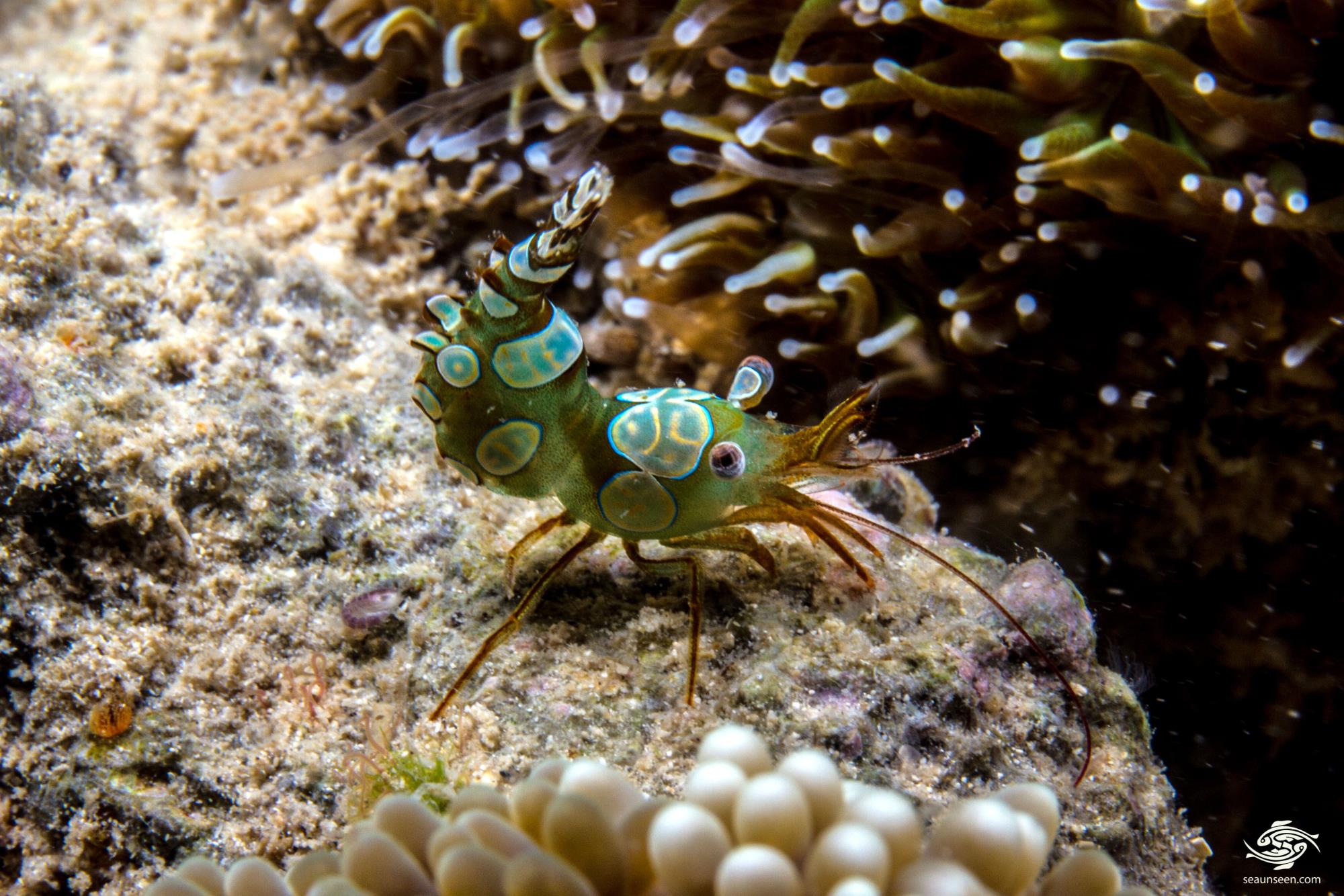 THE SQUAT SHRIMP IN THE WILD

There are usually five to eight on an anemone but on one large Adhesive Anemone we once saw around forty spread around the anemone. They often sit just off the anemone and will scamper back onto the anemone or underneath it if they feel threatened. At night one finds them further away from the anemone. 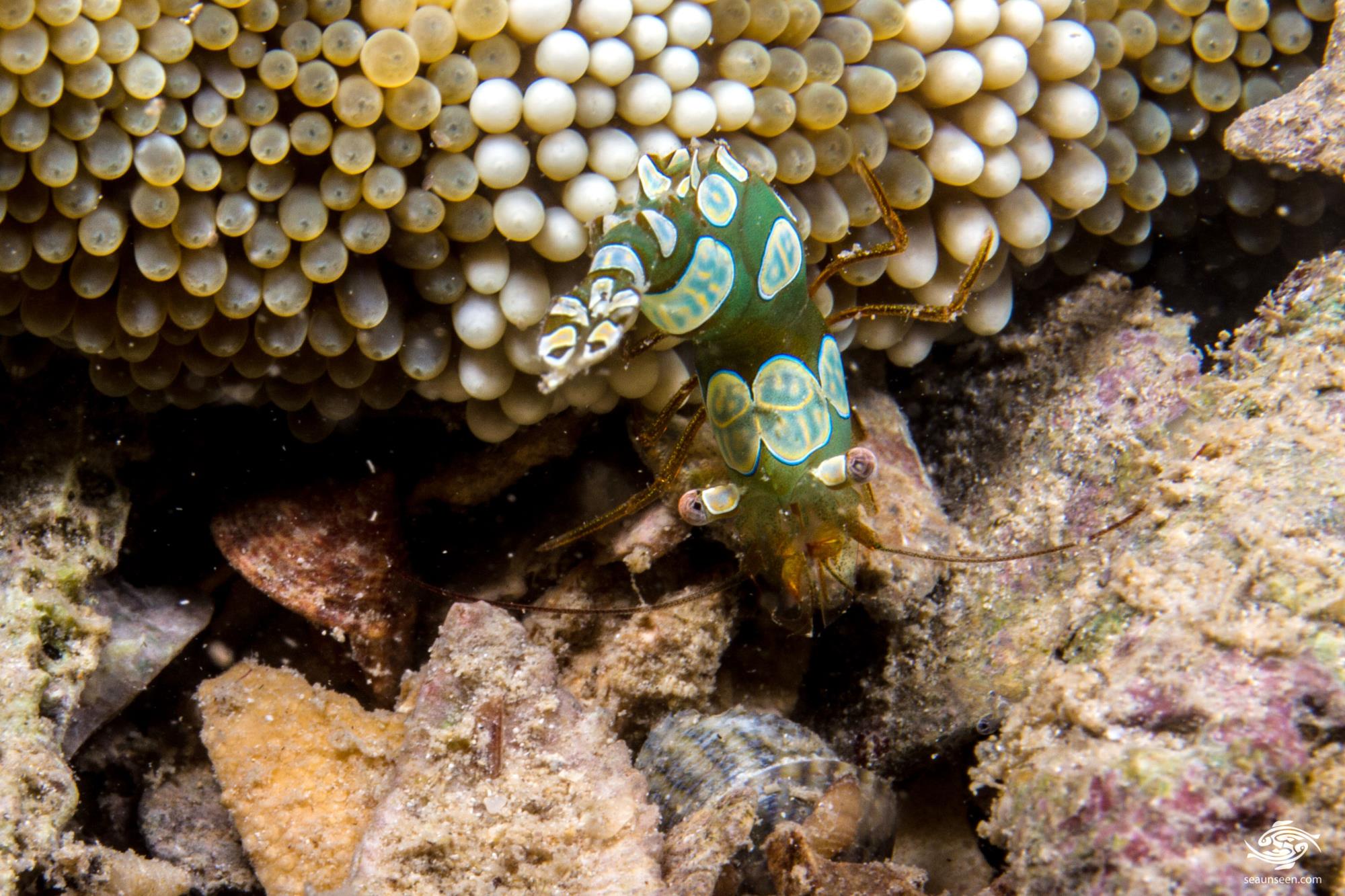 The Squat Shrimp have a wide distribution and are found across the Indian and Pacific oceans , the Caribbean and the Gulf of Mexico and some of the Atlantic Islands including the Canaries and Madeira. In Tanzania we have seen them from 1 meter to 25 meters in depth. 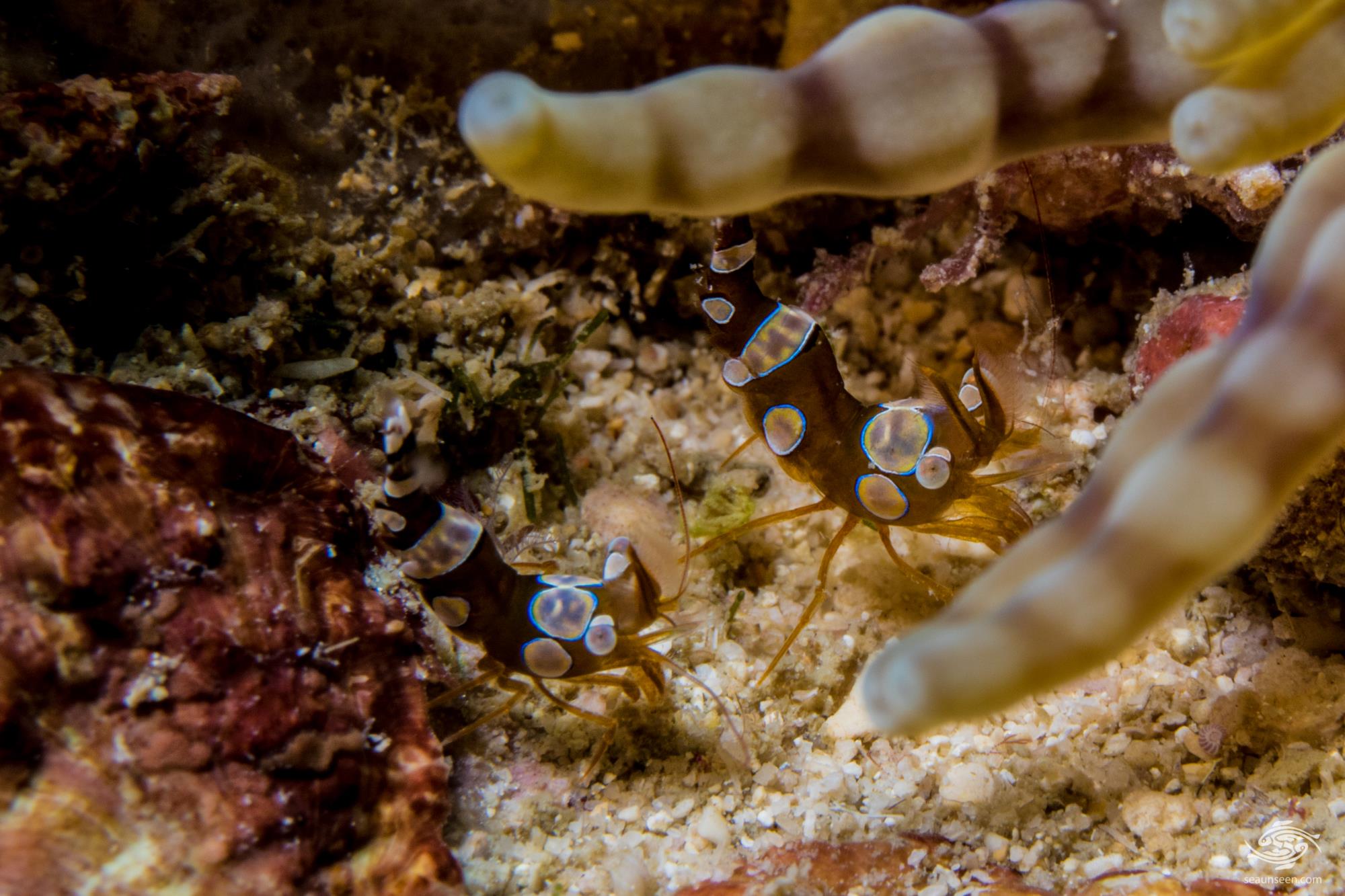 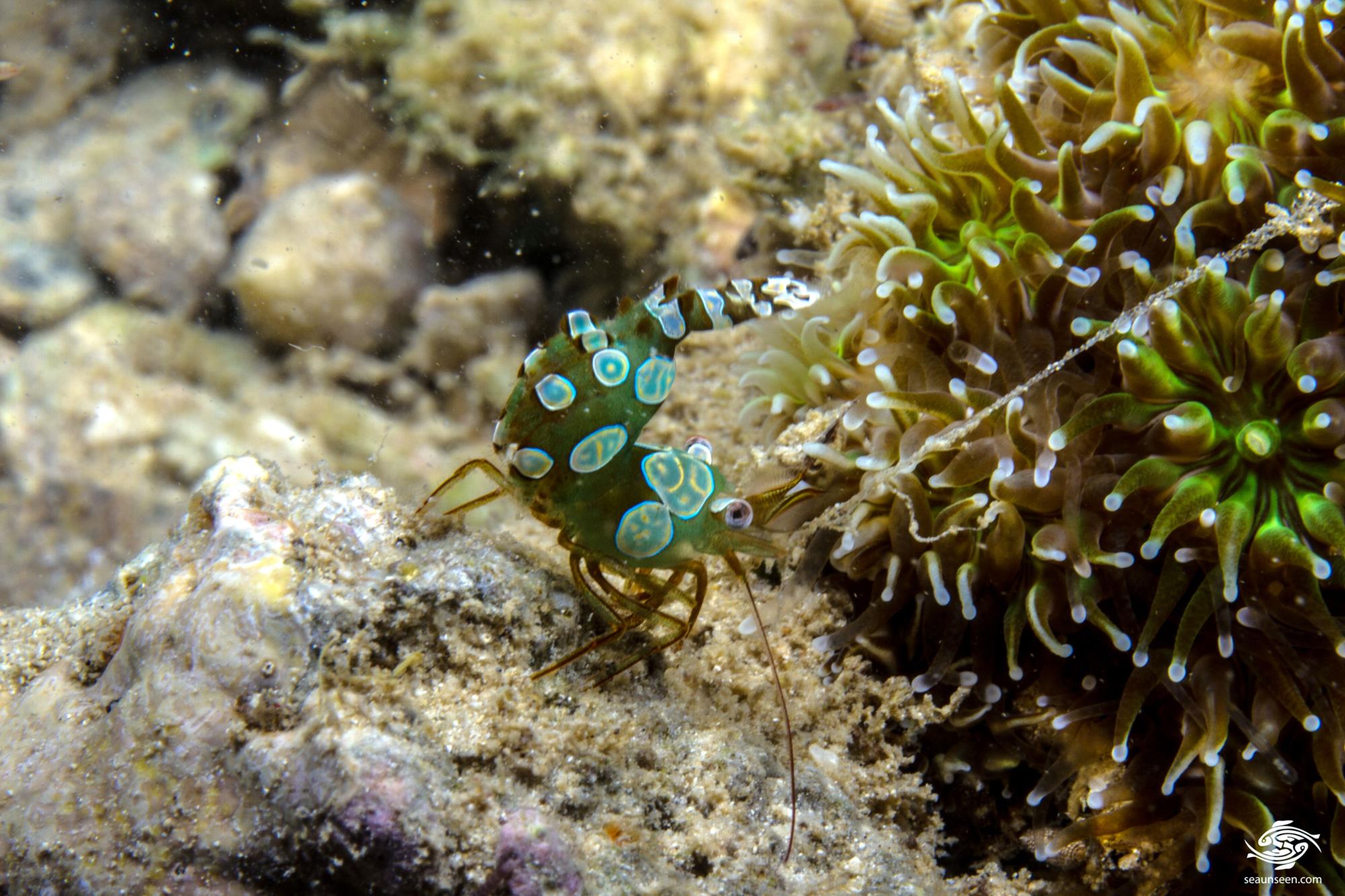 The Squat Shrimp are protandric hermaphrodites and start off as males with the larger specimens turning into females. Once they mate the eggs are extruded onto the spinnerets of the females. When the eggs hatch there are several larval stages that the larvae go through. They seem to be relatively easy to breed in captivity. 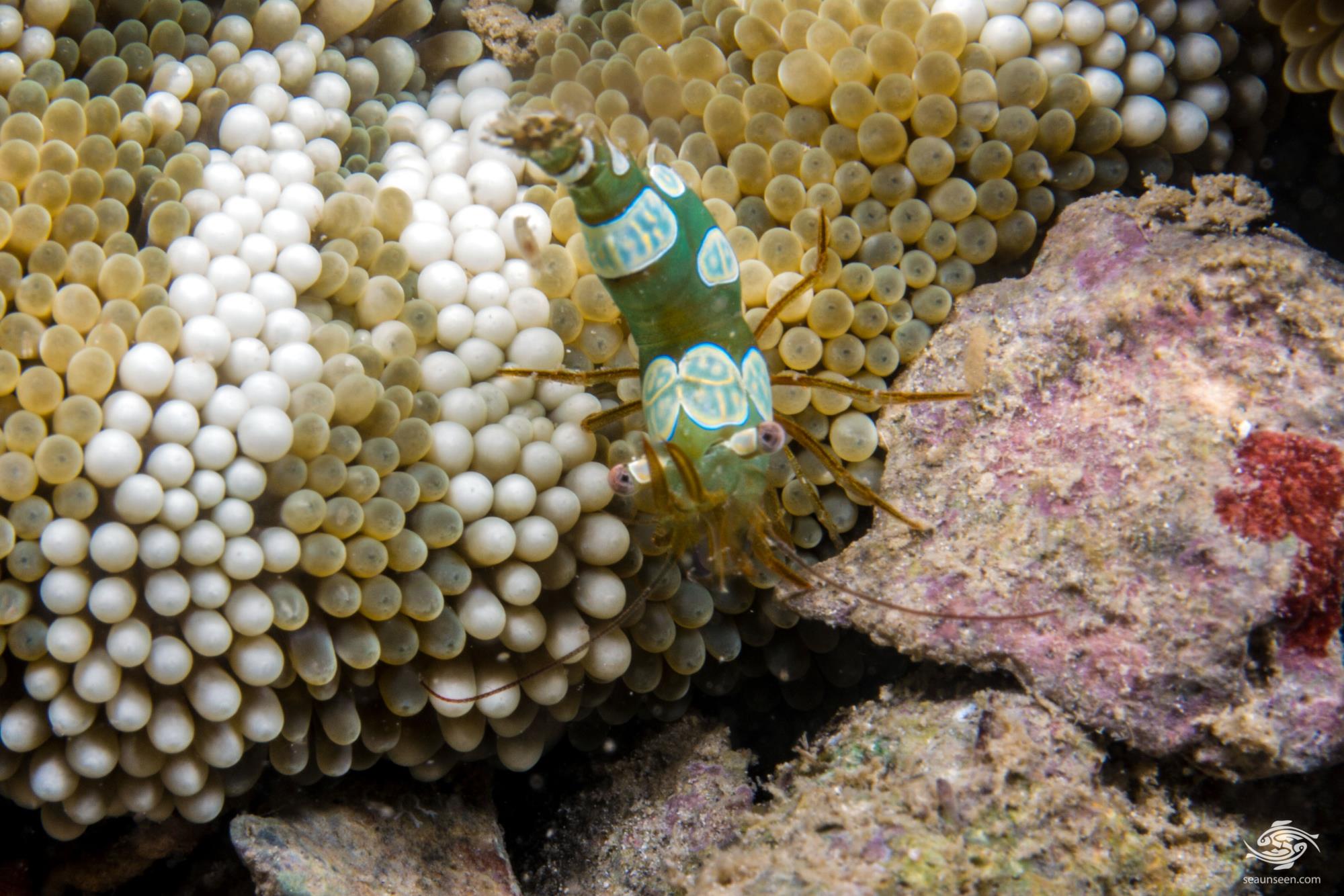 Squat Shrimp are popular with some aquarists, particularly in Nano tanks and are fairly easy to keep. Because of their size and vulnerability in a confined space, one has to be careful with the choice of fishes that they are kept with. If they are fed regularly then they will not pick on corals and other invertebrates.