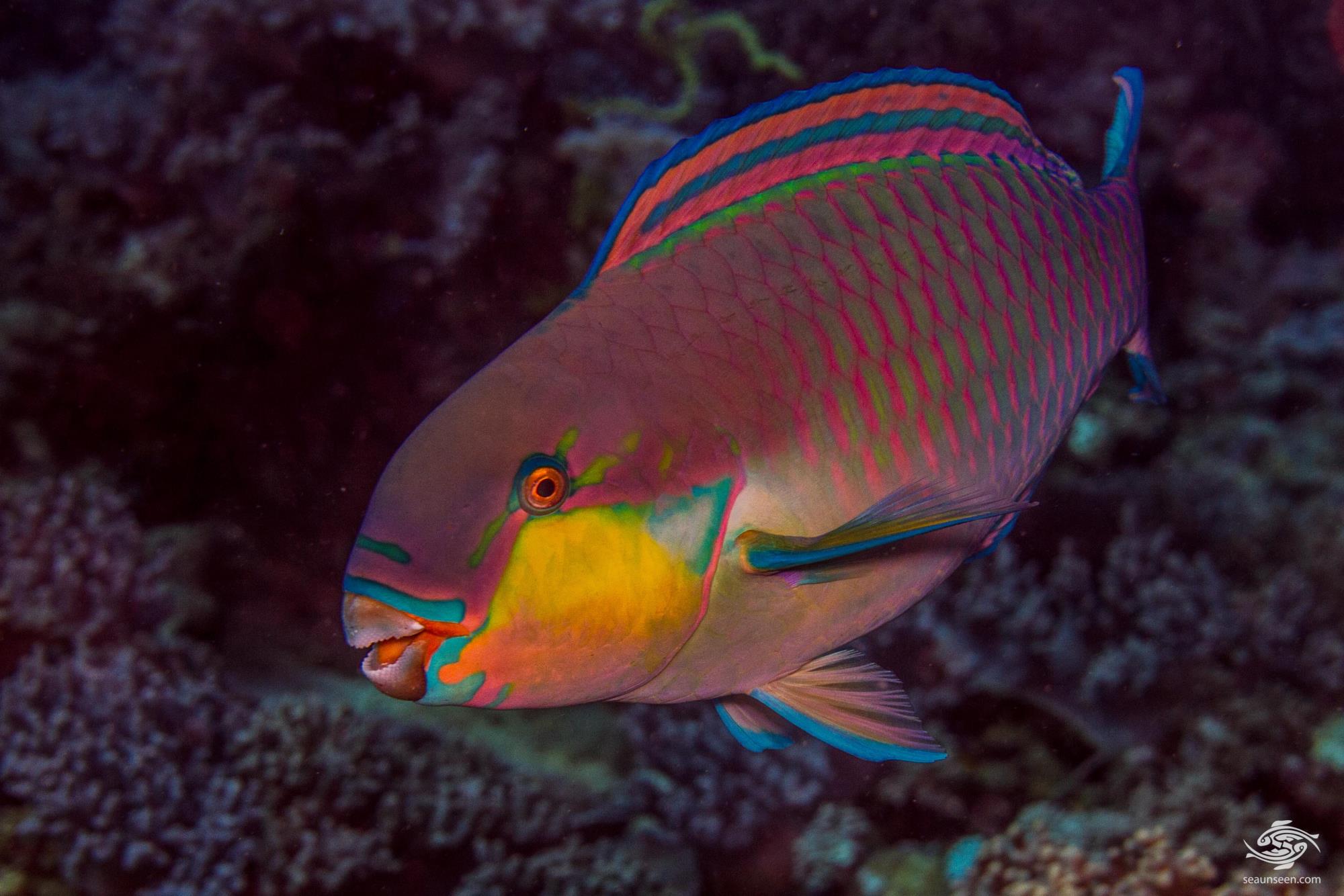 The Steephead parrotfish (Chlorurus strongylocephalus) is also known as the Roundhead Parrotfish. Parrotfish obtain their name from their teeth which are fused into a beak. This species is part of a complex of species along with Chlorurus gibbus from the Red Sea and Chlorurus microrhinos which is found in the west-central Pacific.

Within the various species of  Parrotfish which are part of the Labridae family there is considerable divergence in looks between the juveniles and the adults and some females based on social cues change into so called Supermales which are very colorful. Additionally there are regional variations  in looks which seem to be great in this species because the males in Tanzania seem to have different colors to those from elsewhere.  This combined with their ability to change their colors particularly at night to some degree, creates a large amount of confusion as to which species is which.  To put this into perspective in 1956 Schultz recognised 57 species in the West Indian ocean alone and today there are 29.

Most have been described on multiple occasions in various areas with this species having been described on at least three occasions by different scientists in different parts of the world.  It can often be exceedingly difficult to determine which species is which. As one can see below in chronological order of growth the changes are dramatic.  These images will only be indicative of color patterns for Tanzania. 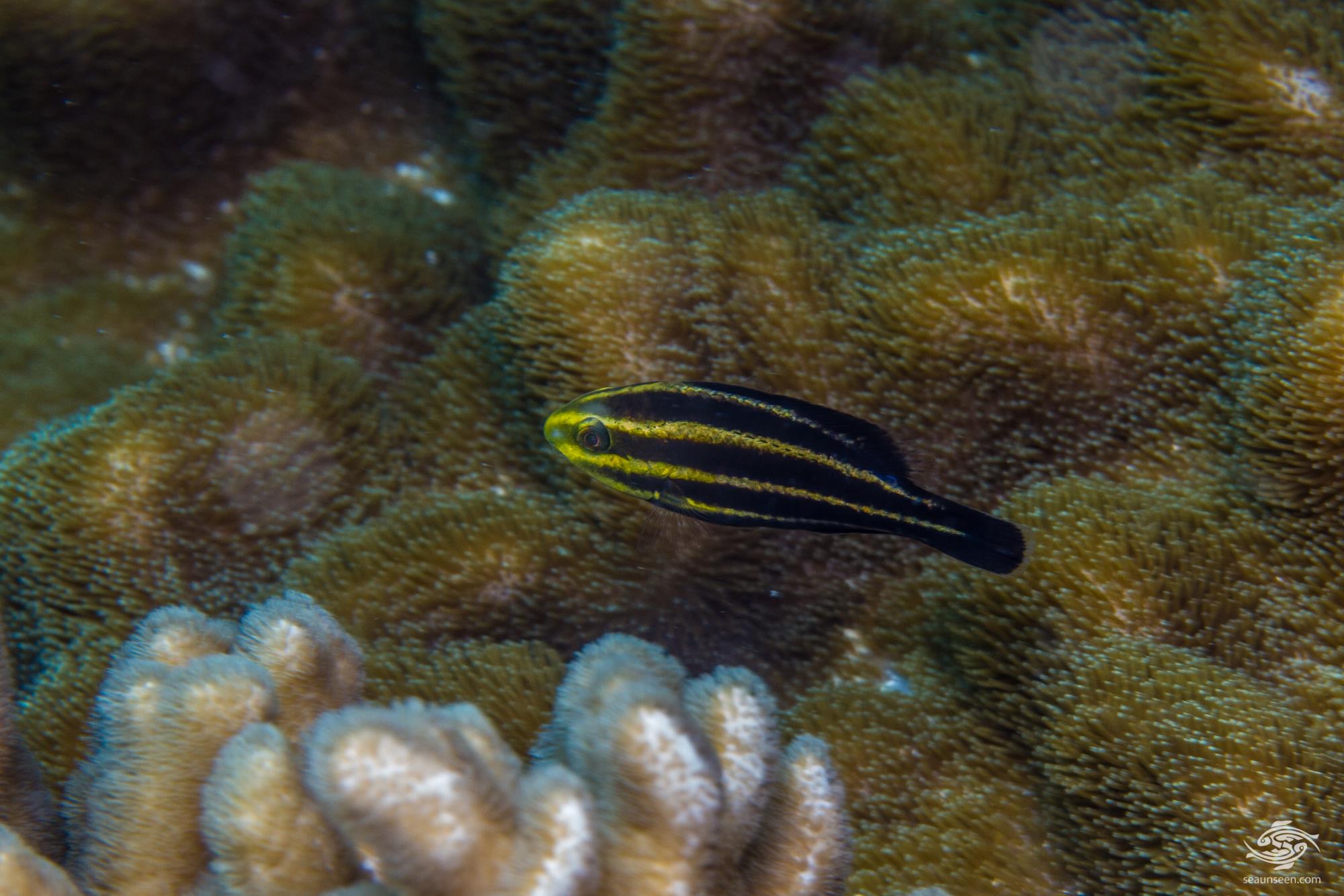 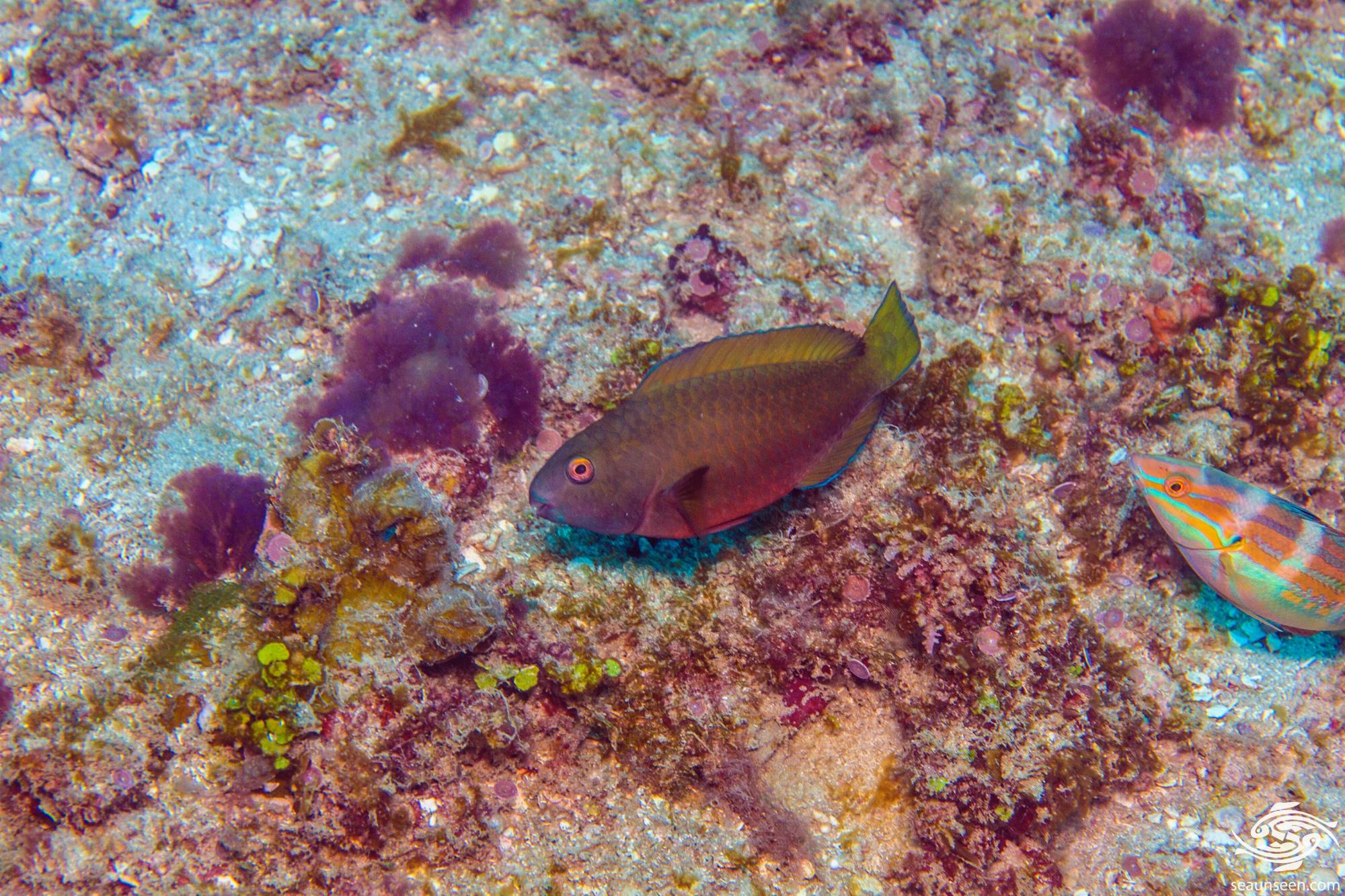 As they age so blue lines develop around the mouth and blue develops on the mid section of the caudal fin. 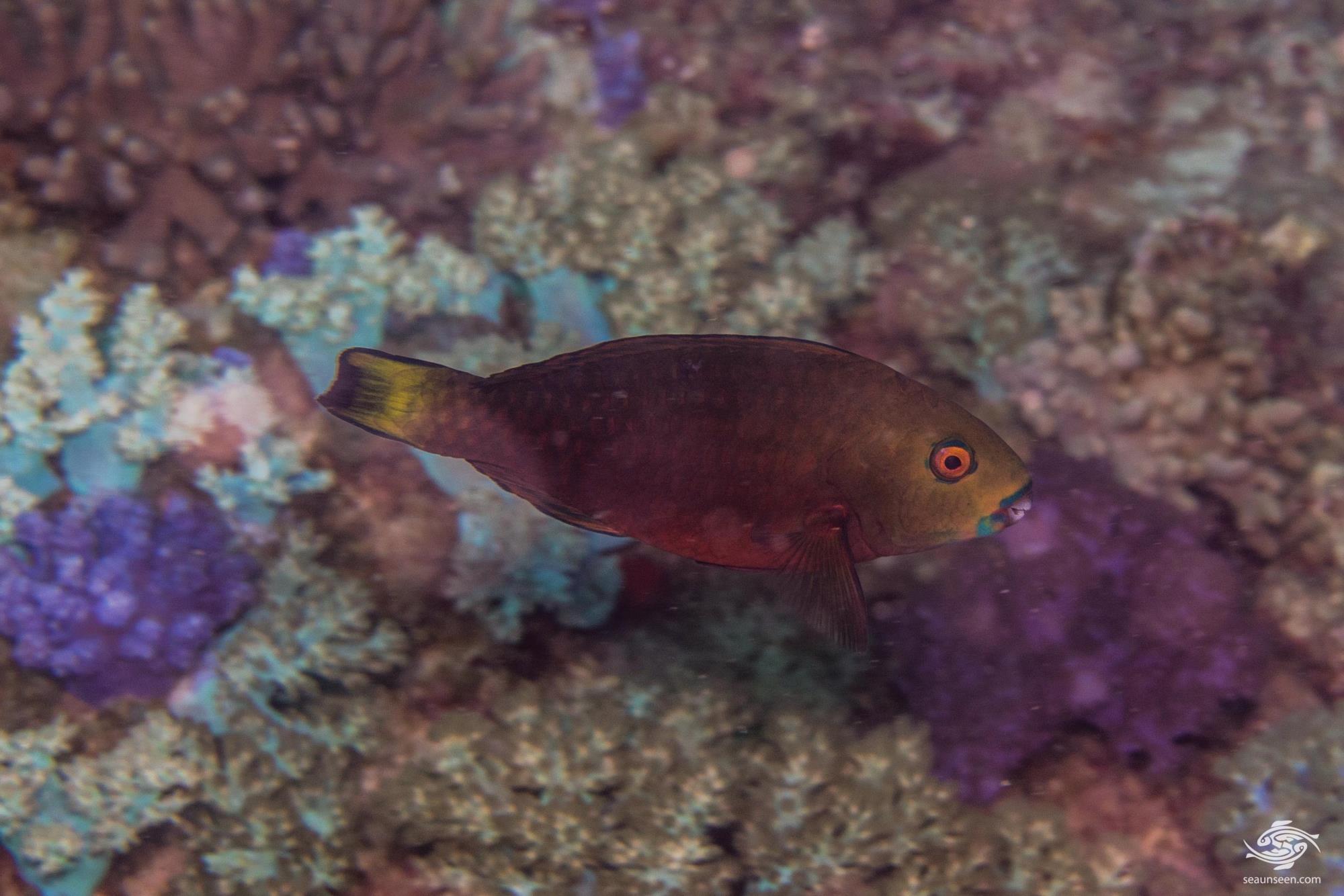 With further growth these features become more prominent and a blue circle develops around the eye. The body begins to lighten from the head and tail going more yellow. 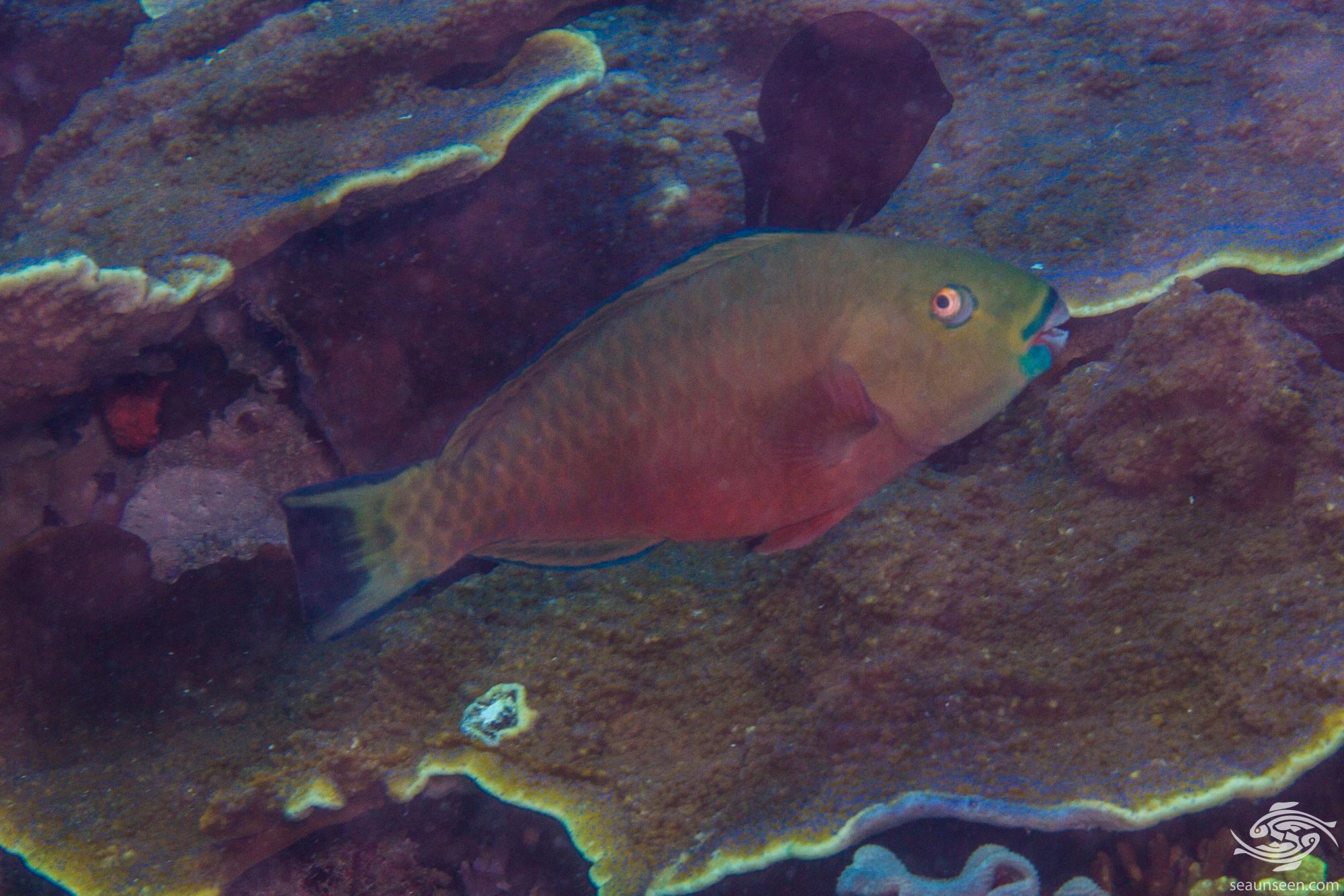 Eventually they mature into an initial phase as seen below. The body is predominantly yellow with darker orange scale edges in the lower mid body. With the yellow and blue edging they make a very attractive Steephead parrotfish. 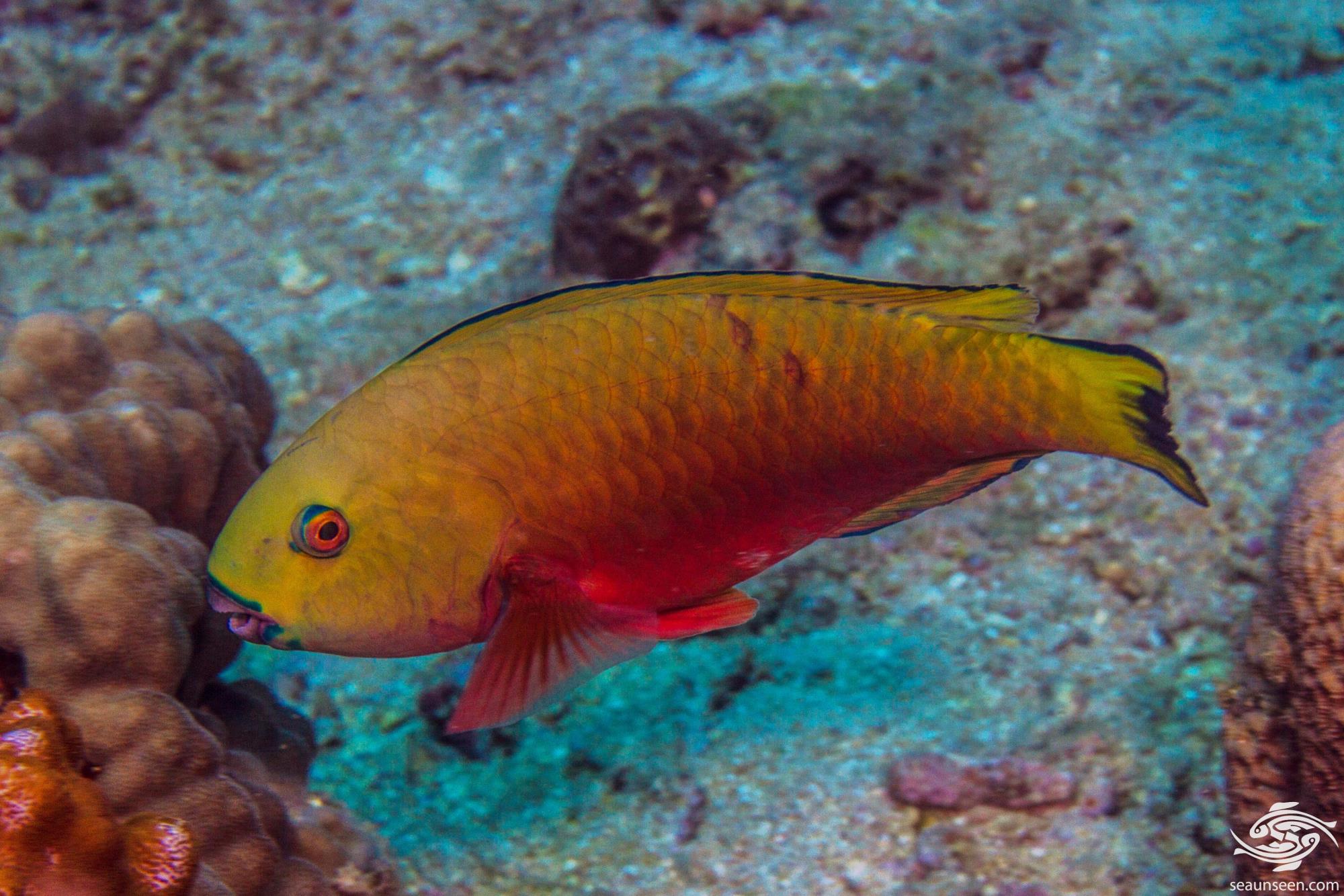 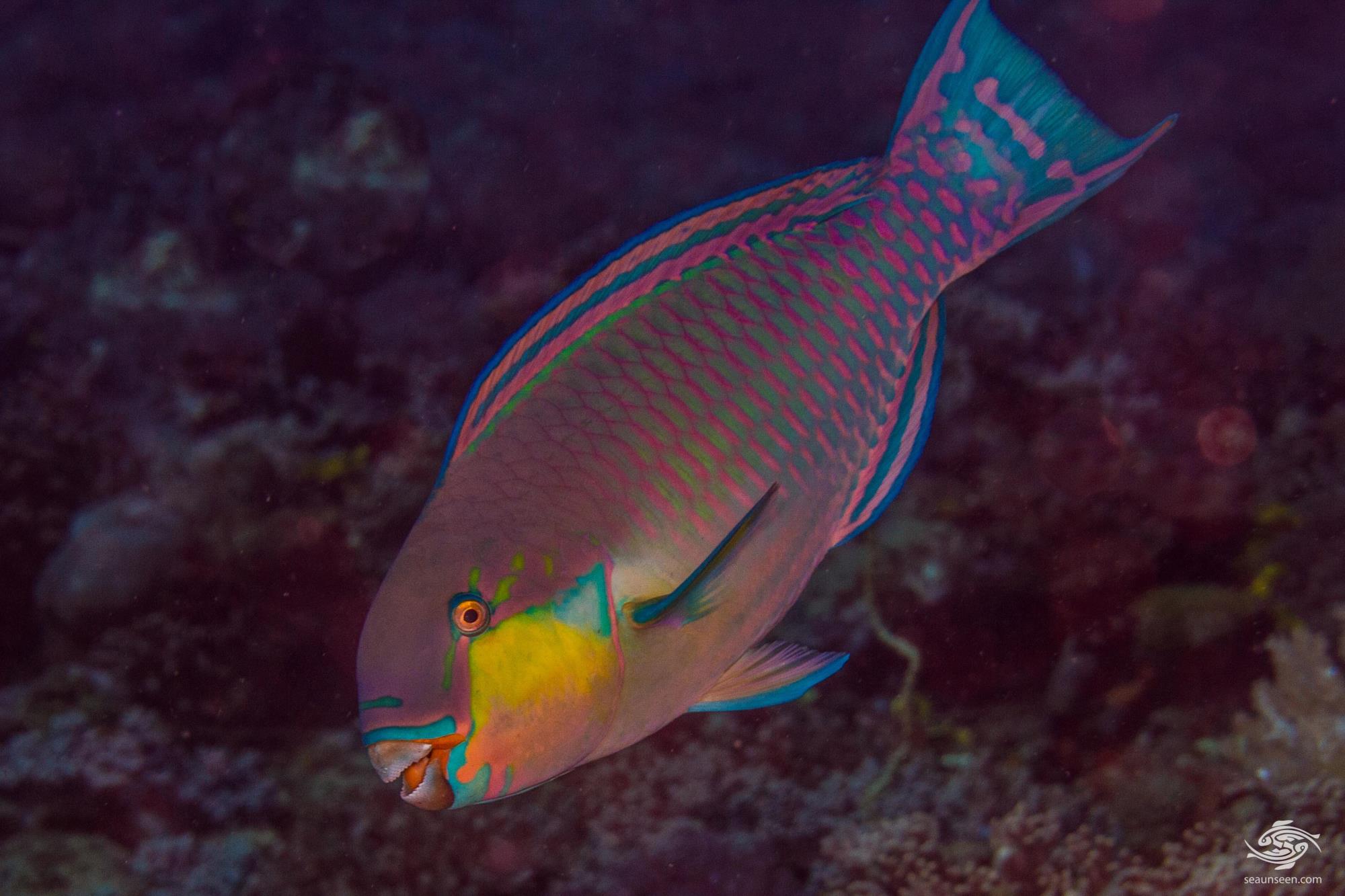 The males grow up to 70 cm although these are today extremely rare and usually only seen in marine parks. A large male of this size is pictured below. Some yellow has developed on the rear back towards the caudal area and the filaments on the caudal fin have lengthened substantially. A stunning looking Steephead parrotfish. in Tanzania likely only to be seen in the Marine Park on Mafia Island where this specimen was photographed or on remote reefs. 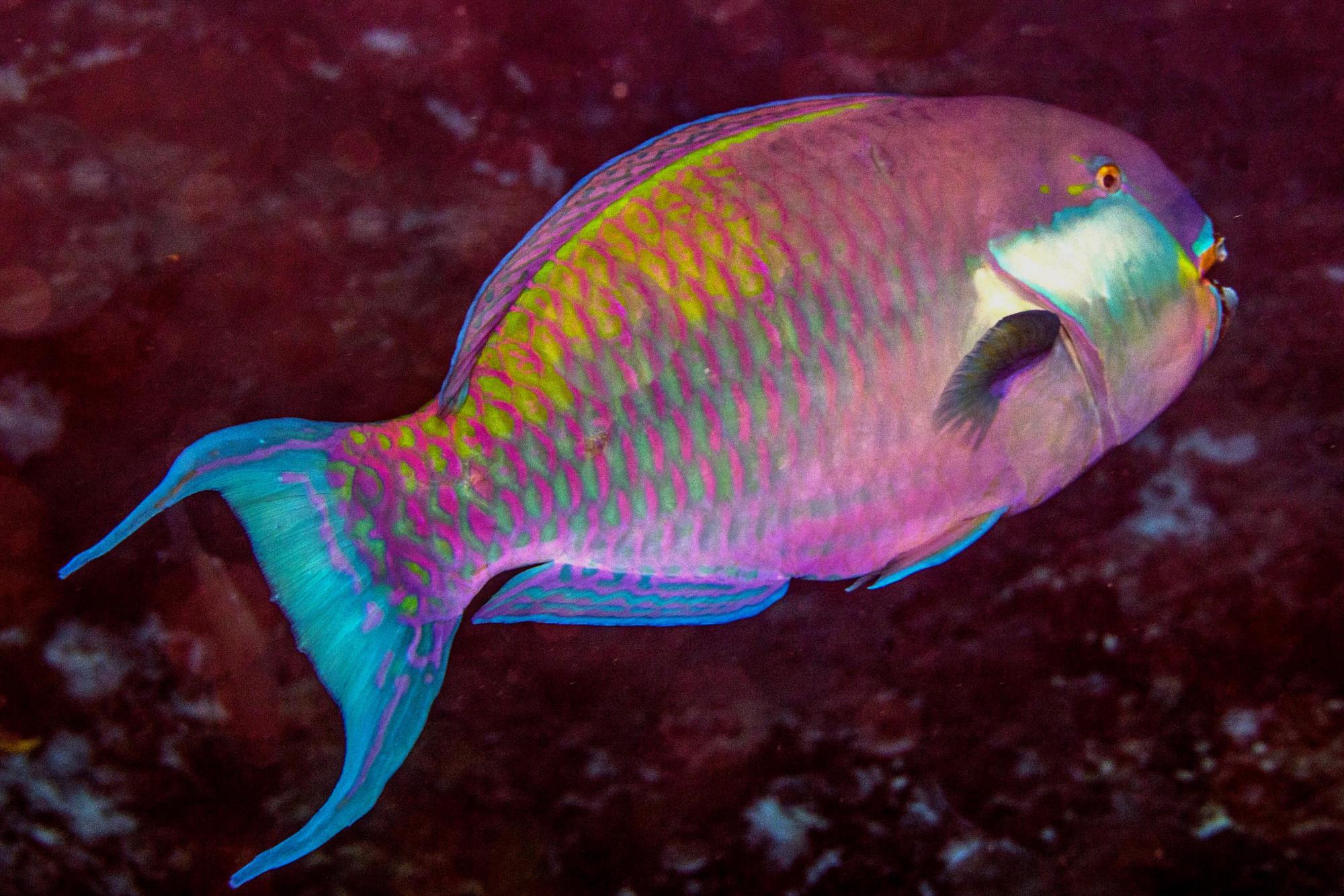 STEEPHEAD PARROTFISH IN THE WILD

As a juvenile the Steephead parrotfish can be seen feeding on the shallower reefs at around 10 to 15 meters with groups of Rabbitfish , Goatfish, Wrasse and smaller Surgeonfish.  They are fairly rare and are not common in Tanzania. They are always seen solitary and we have never seen more than one at a time. The younger males are occasionally seen around 15 meters but the large adults we have only seen around 25 meters. 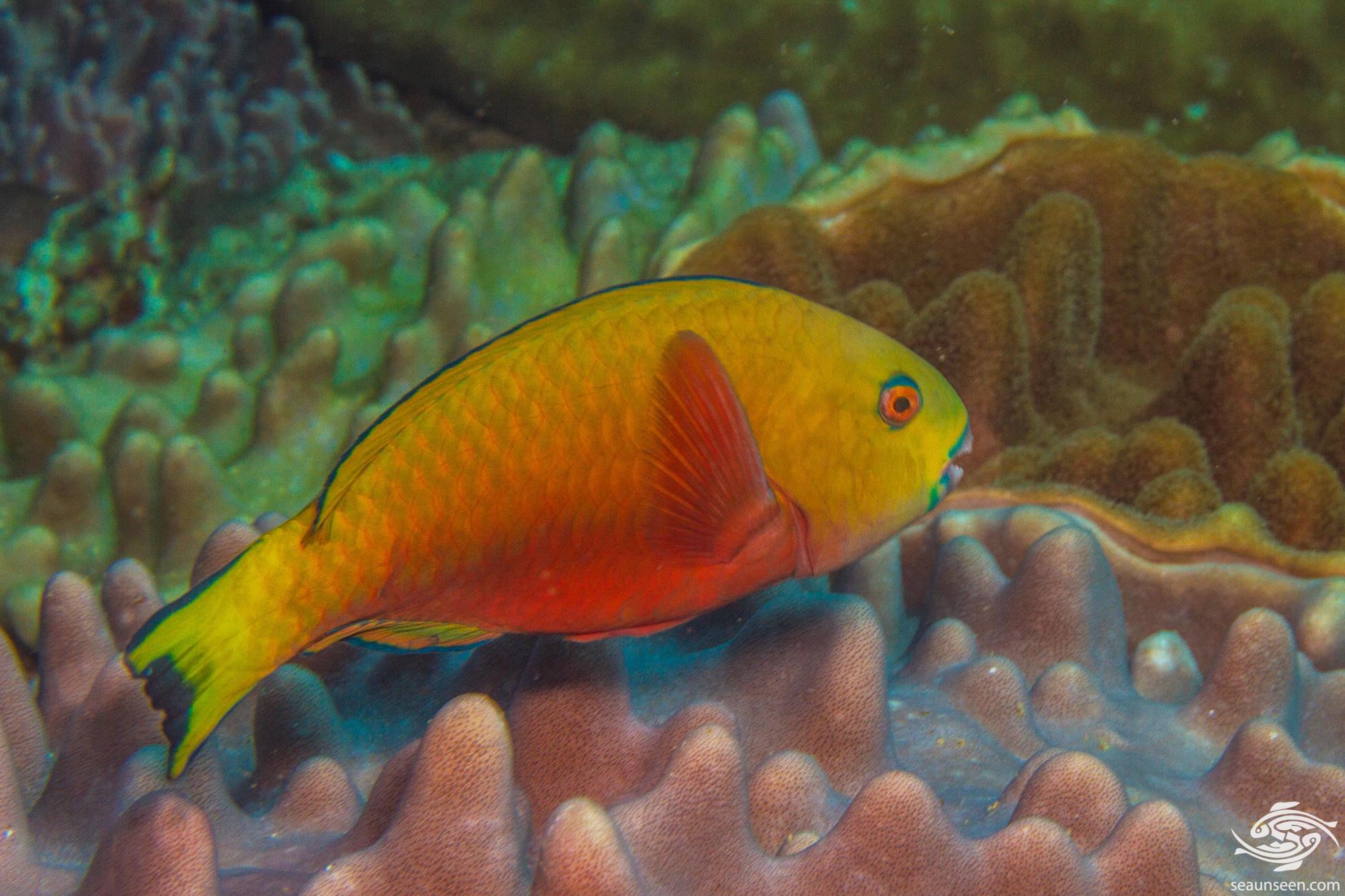 The Steephead Parrotfish is found from Mozambique northwards up the East African coast up to the Gulf of Aden and across to Western Indonesia. 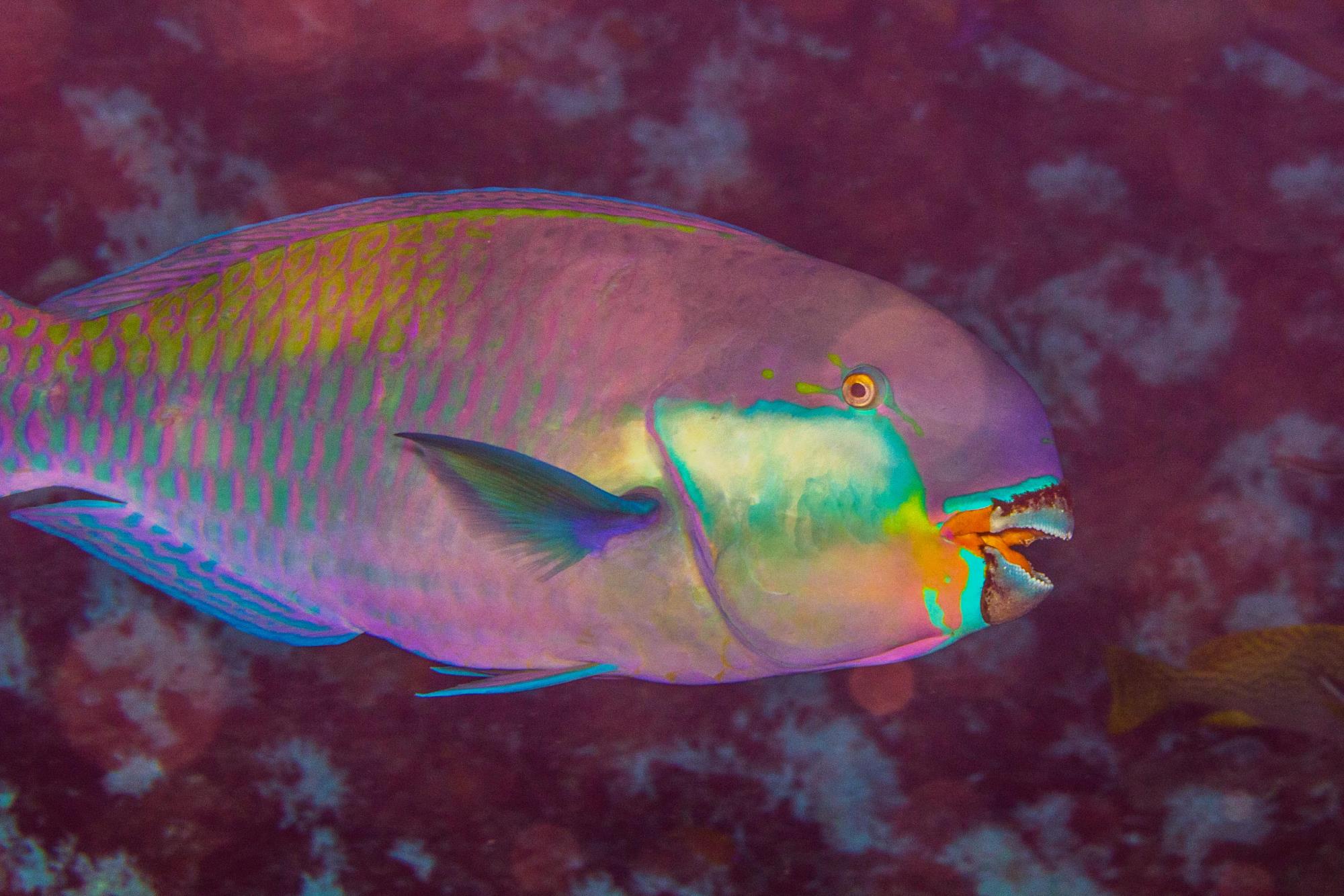 The Steephead Parrotfish as with most other parrotfish feed on a variety of  filamentous algae which is scraped off dead coral using their powerful beaks. These scrapings which are mainly comprised of inorganic matter are further ground down by bony teeth plates and then go into a long specialized alimentary canal where nutrients are extracted.  The inorganic matter is expelled as fine sand. 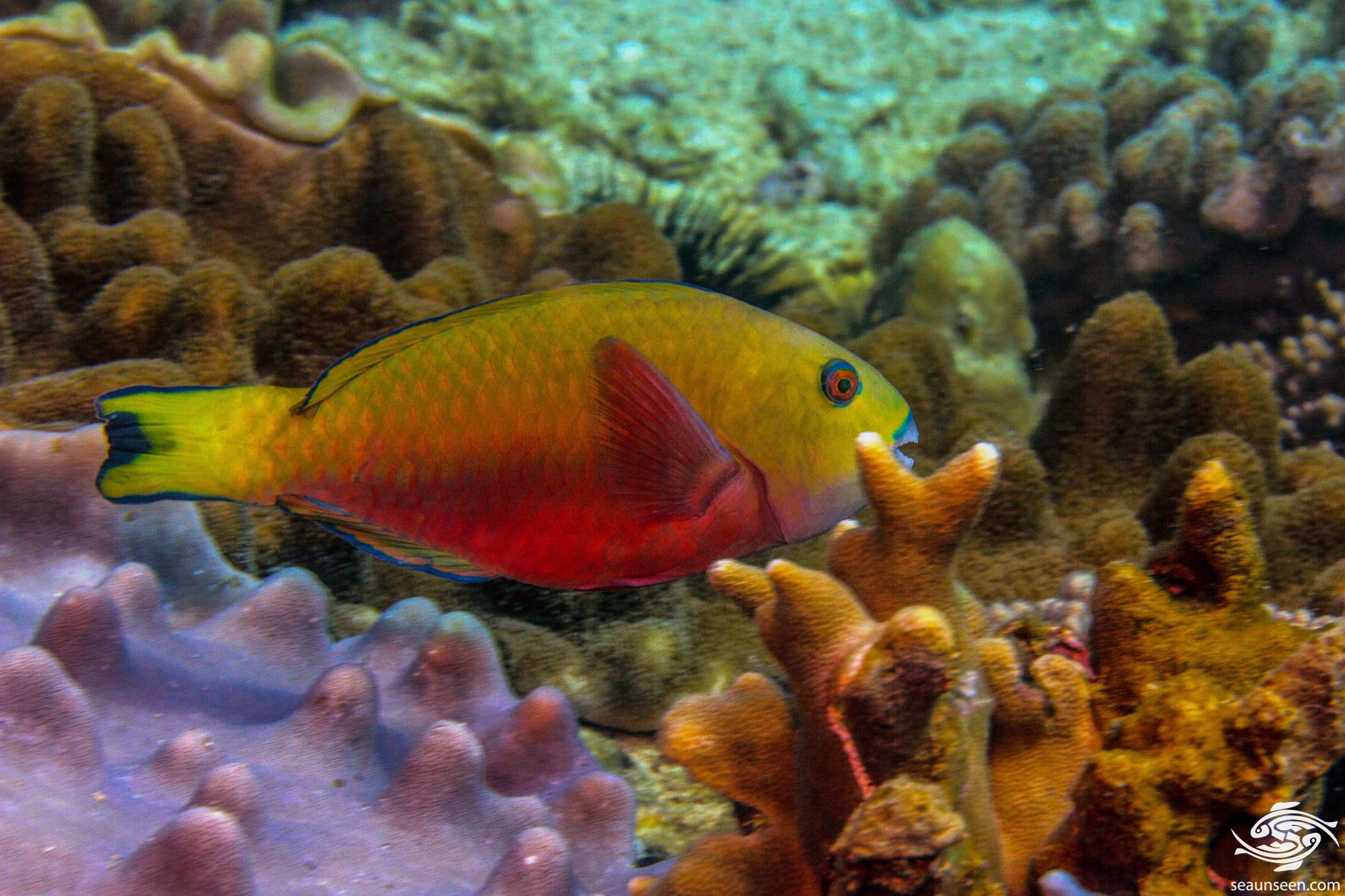 Steephead Parrotfish are not commonly kept in aquariums although some public aquariums may occasionally keep them for public display. This is both a function of their size and the difficulty in providing them with food. 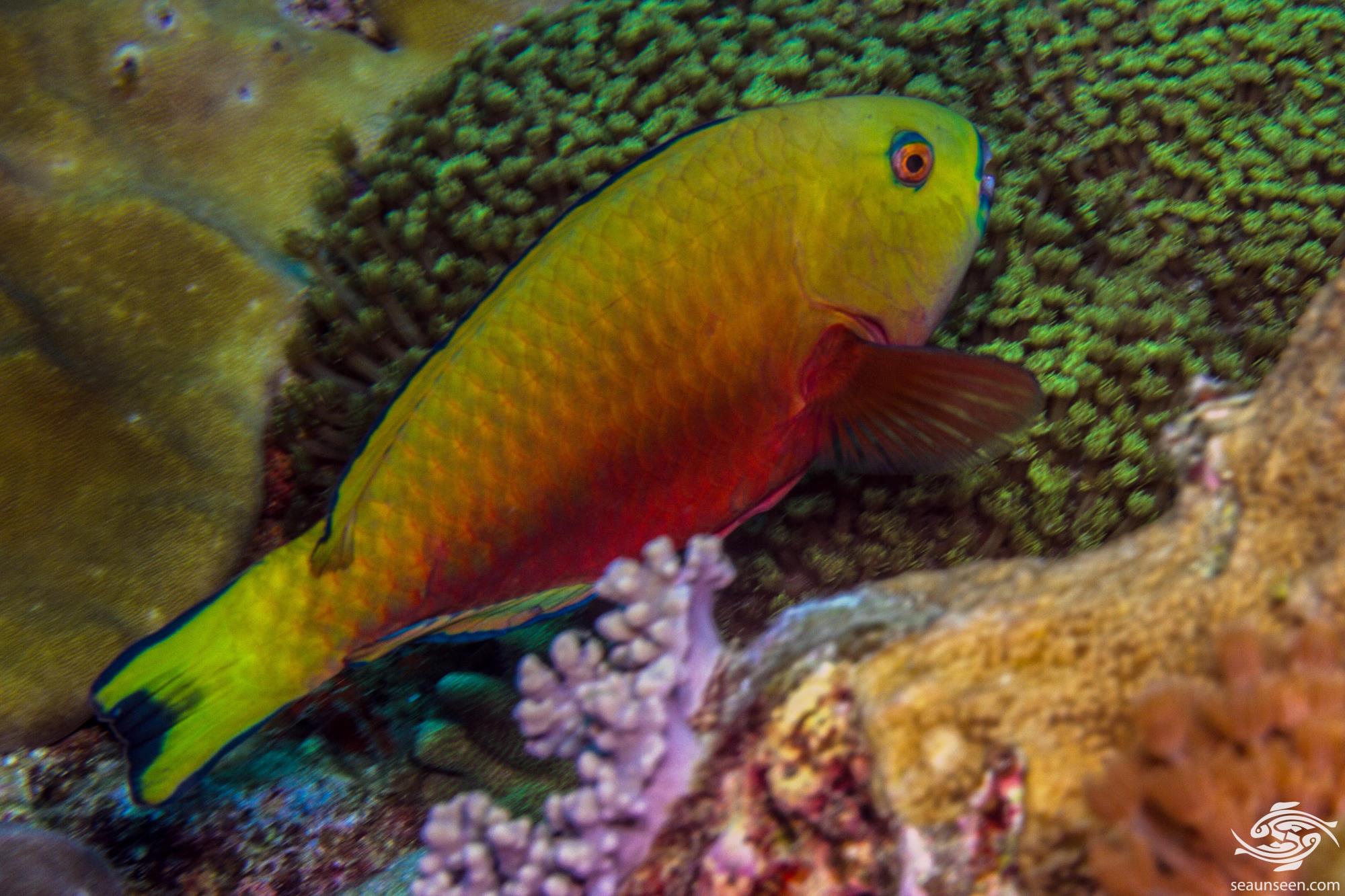 All the Parrotfish are heavily exploited in Tanzania both by trapping and netting. Parrotfish carry a heavy premium on price, and make very good eating as a rule.