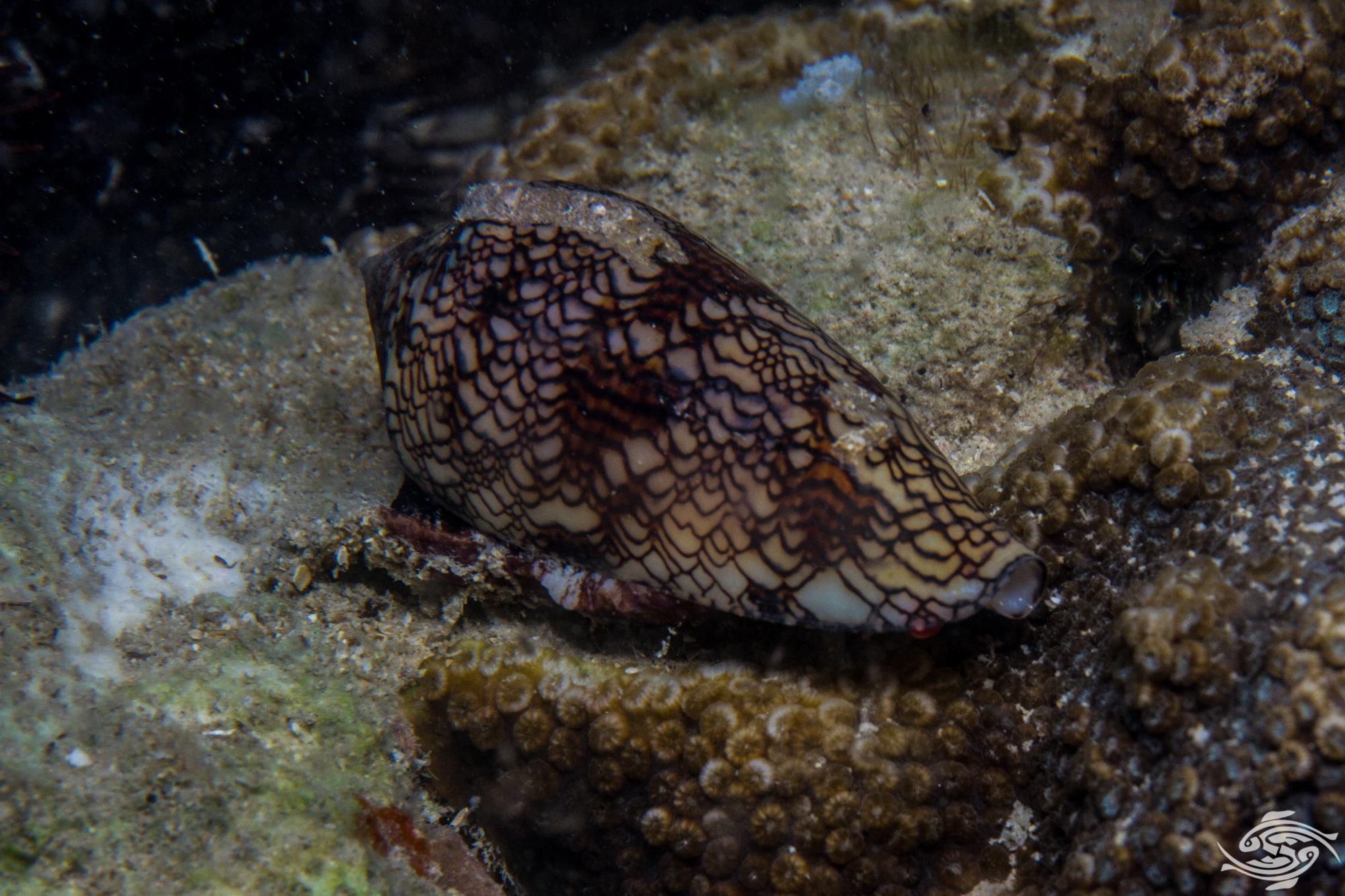 The Textile cone shell Conus textile is also known as the cloth of gold cone shell. As with all the cone shells, they are carnivorous and predatory, preying on other mollusks.  In order to quickly disable their prey they have evolved a specialized dart like tooth on their radula, which can be likened to a tongue.

After detecting prey a proboscis is extended towards the prey from the radula and the dart is then ejected with muscular force at the prey. Toxins known as conotoxins containing peptides are pumped through the dart into the prey. These almost instantly immobilize the prey.

The Textile Cone shell along with the Geographic Cone have the distinction of being one of the most venomous creatures on earth and they have been responsible for numerous fatalities across the world.  Fortunately they are nocturnal and seldom if ever come out during the day and humans do not often come into contact with them.

Most fatalities occur when they are tramped on or handled on the beach. In areas with big swells the shells are sometimes pushed up on the beach by the waves. Having a very attractive shell, people pick them up and in self defense they will sometimes dart the person.

One should never ever pickup a cone shell, with the larger specimens the dart has the ability to penetrate a wetsuit and gloves. It is not sensible to test to see whether ones gloves are thick enough.  They are best left well alone.

The venom results in intense pain, swelling, muscle paralysis and breathing failure. The effects can reportedly be delayed. As a young child visiting the Transkei coast in South Africa, we once arrived on the beach when they were taking a body away. The person had picked up a Textile Cone shell lying on the beach. I was shown the shell in question and given a lecture on why one should never ever pick one up.

The lesson has stuck with me ever since. When diving at night one should exercise great care not to be pushed onto corals or rocks that may have one of these snails on it. And never pick one up, it is not worth the risk.

Textile cone shells  as their name implies have a cone shaped shell. They grow up to 10 cm in length and have an attractive pattern.  There are several sub species of Textile cones which differ slightly in appearance but they all have dark brown lines on them which create rough triangular patterns on them. The background color varies from white to light brown.  Depending on local conditions the shell may be partly overgrown and they may be difficult to identify. 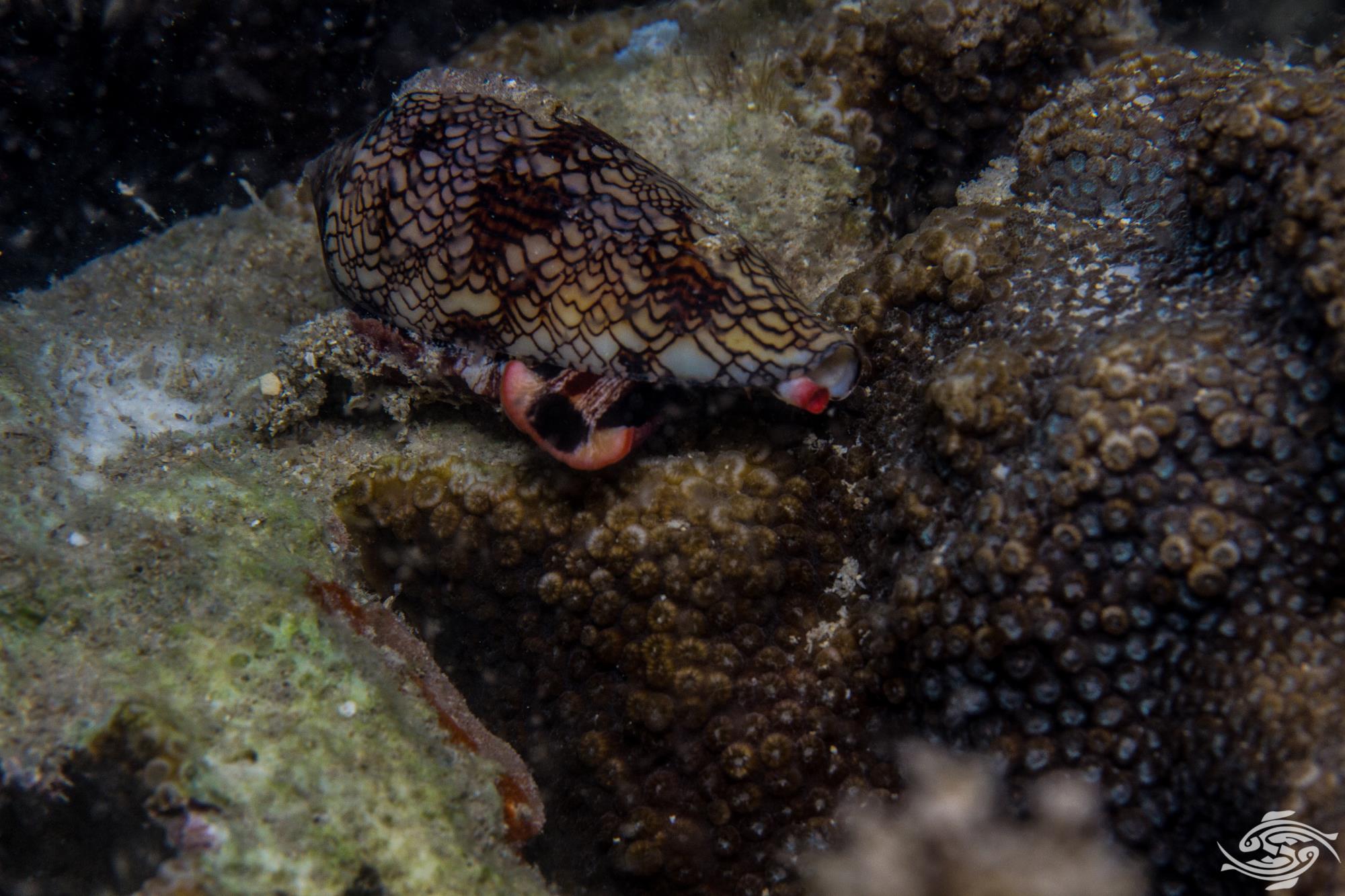 Textile cone shells are found across the tropical areas of the Indo west Pacific. They seem to frequent the rubble areas around and between coral reefs where there is abundant algae growth for their prey. 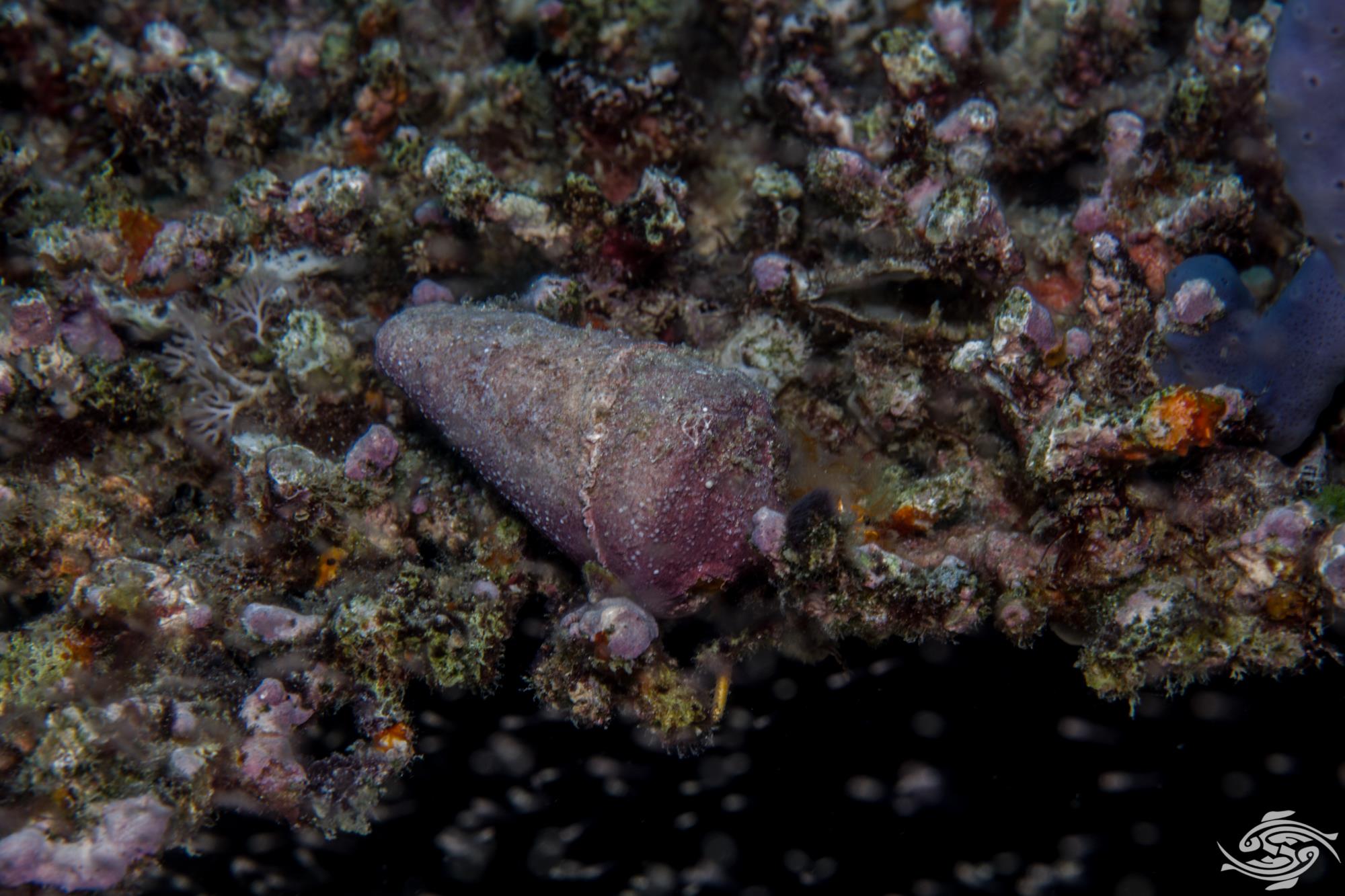 Textile cone shells mainly feed on other mollusks. After darting them they envelop them with their mantle and digest them. They have the ability to vary the amount of poison they inject dependent on the size of the prey. 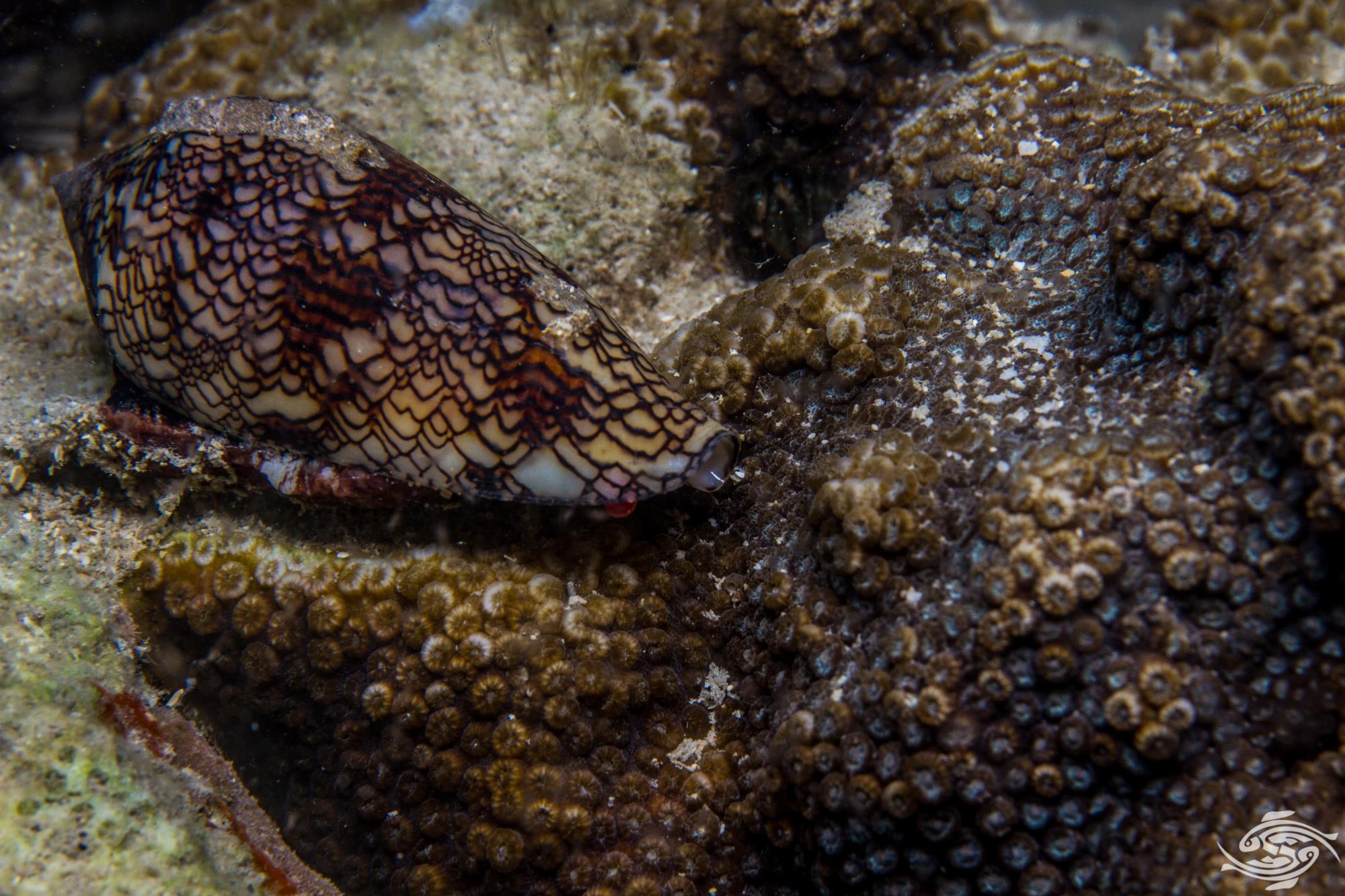 Because of the dangers involved one should simply never touch one of these shells. 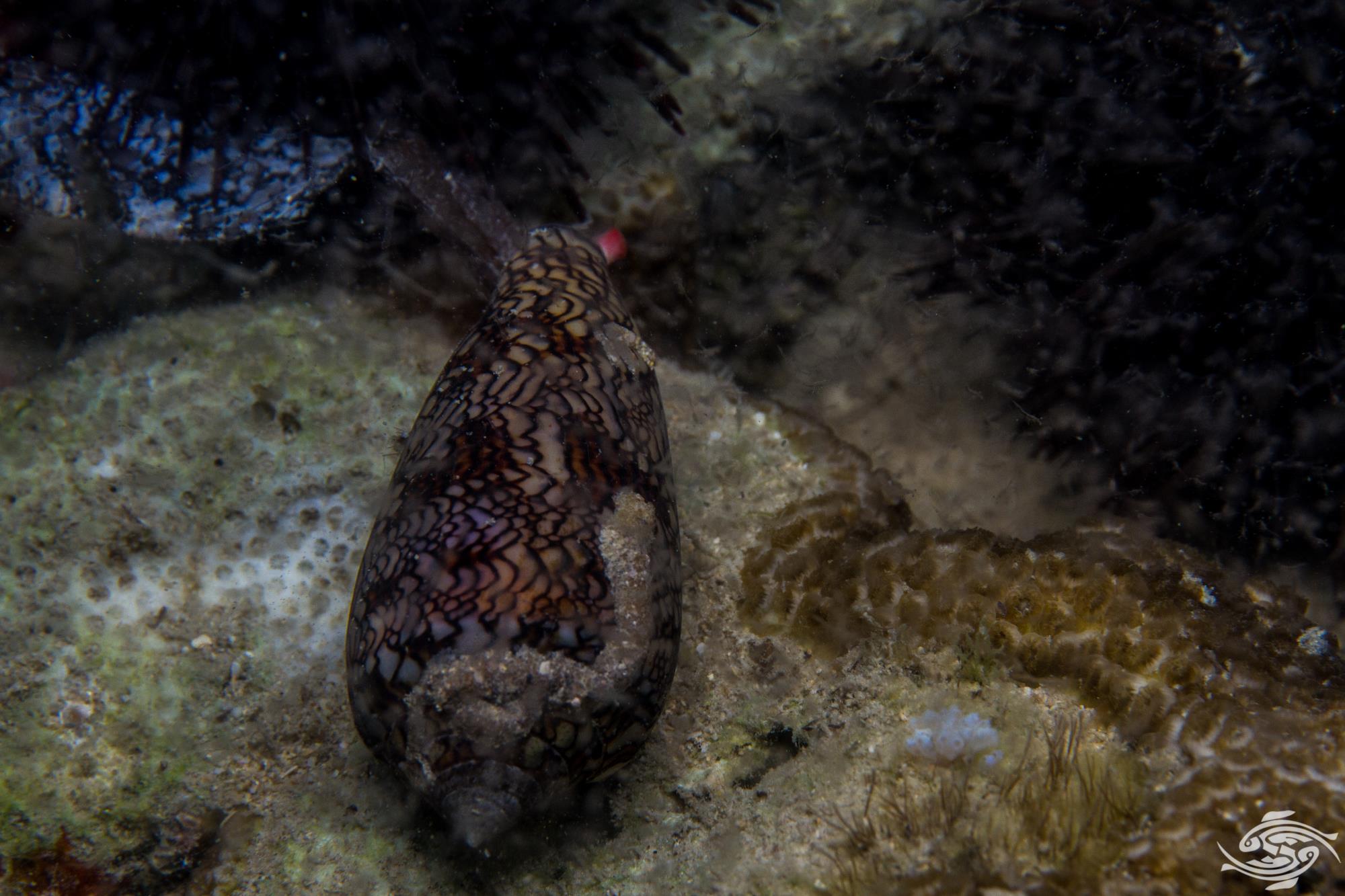 If you are scuba diving the smart thing to do is get to the surface as soon as safely possible. Once the effects of the poison kick in this may not be easy. After that get to a doctor as fast as possible. Any part of the sting attached to the body should be removed as fast as possible to limit poison intake. If medical attention is not available, then hot water as hot as one can take it can be used on the affected area, this because the poison is protein based and heat breaks up the protein chains. 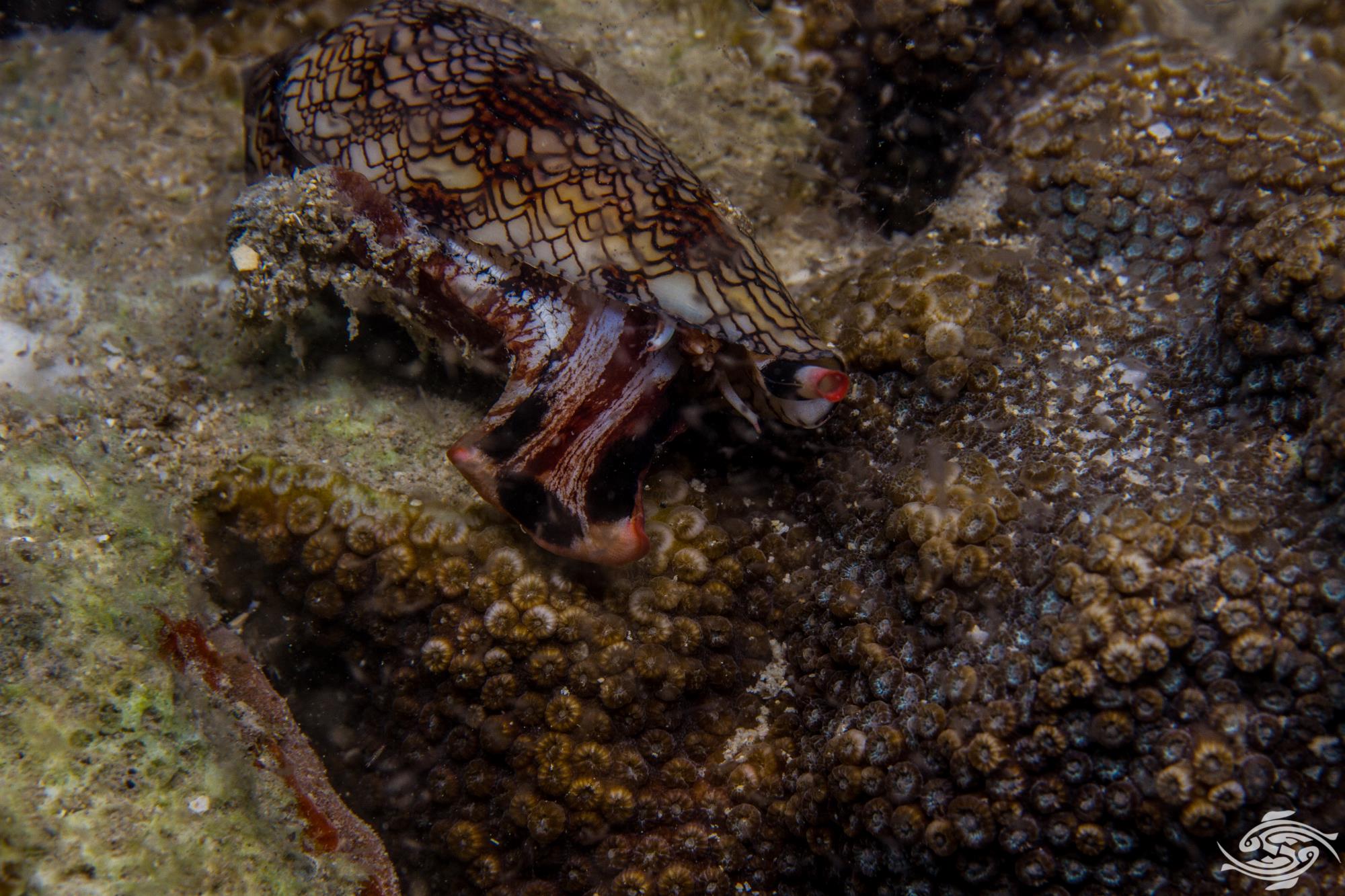 The shells being highly attractive are sought after by collectors which puts pressure on the population.  They are available for sale on the internet for roughly USD 1.10. They are much prettier in the ocean and that’s where they should be. Certain species of Hermit crabs are adapted to cone shells and taking them out the ocean deprives them of a home.

Interestingly the venom of some species of cone shells is being tested as a pain killer for humans. It is reportedly stronger than heroin and non addictive. 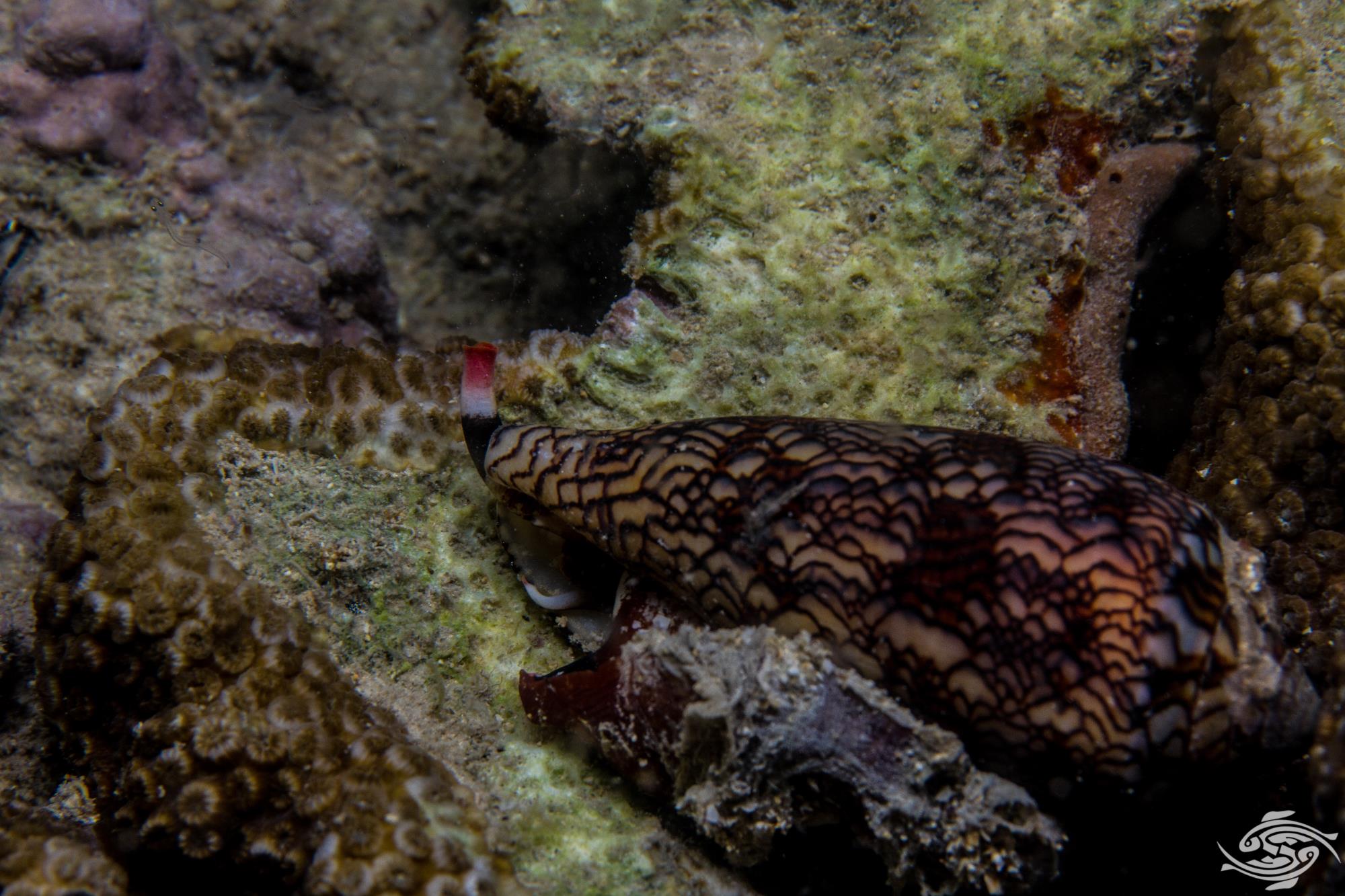