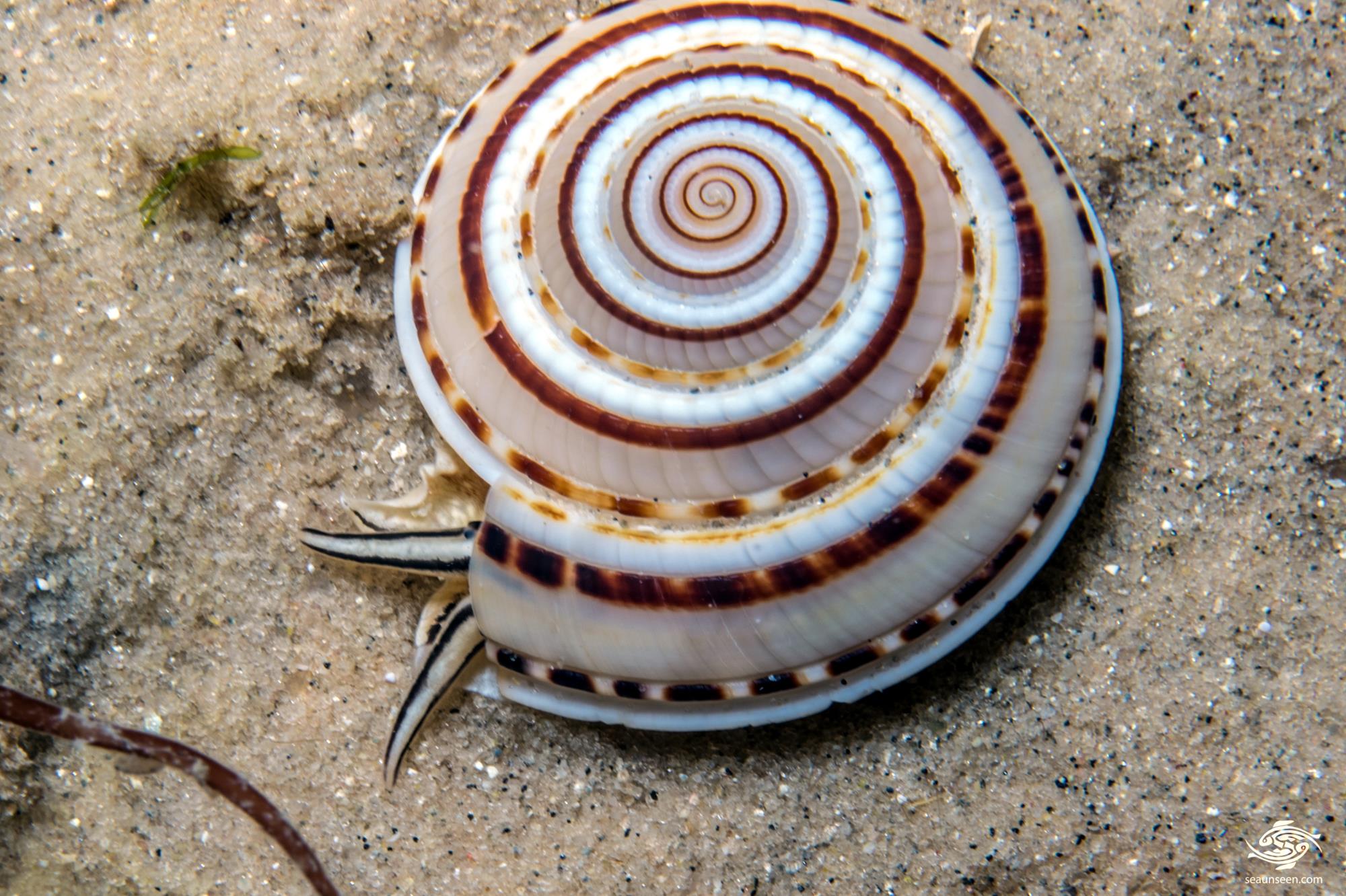 The Sundial shell (Architectonica perspectiva) is  also known as the Perspective Sundial shell and the Clear Sundial shell.  They are marine snails in the super family Architectonicoidea and were first described by Linaeus in 1758.  The family have been around for a long time and fossilized shells have been found from the Miocene period in India. They are quite commonly seen at night on sandy areas in the shallows in Tanzanian waters.

The shells are distinctively disc shaped being round with a broad flat base and flattened spire which curves clockwise from above. There are three continuous brown and white bands which follow the spire They grow up to 6 cm in diameter. Viewed from above the circular shell with the alternating white and brown bands resembles a sundial giving them their common name. The mollusk its self is white with black edges and they are shy and do not appreciate light being put on them. 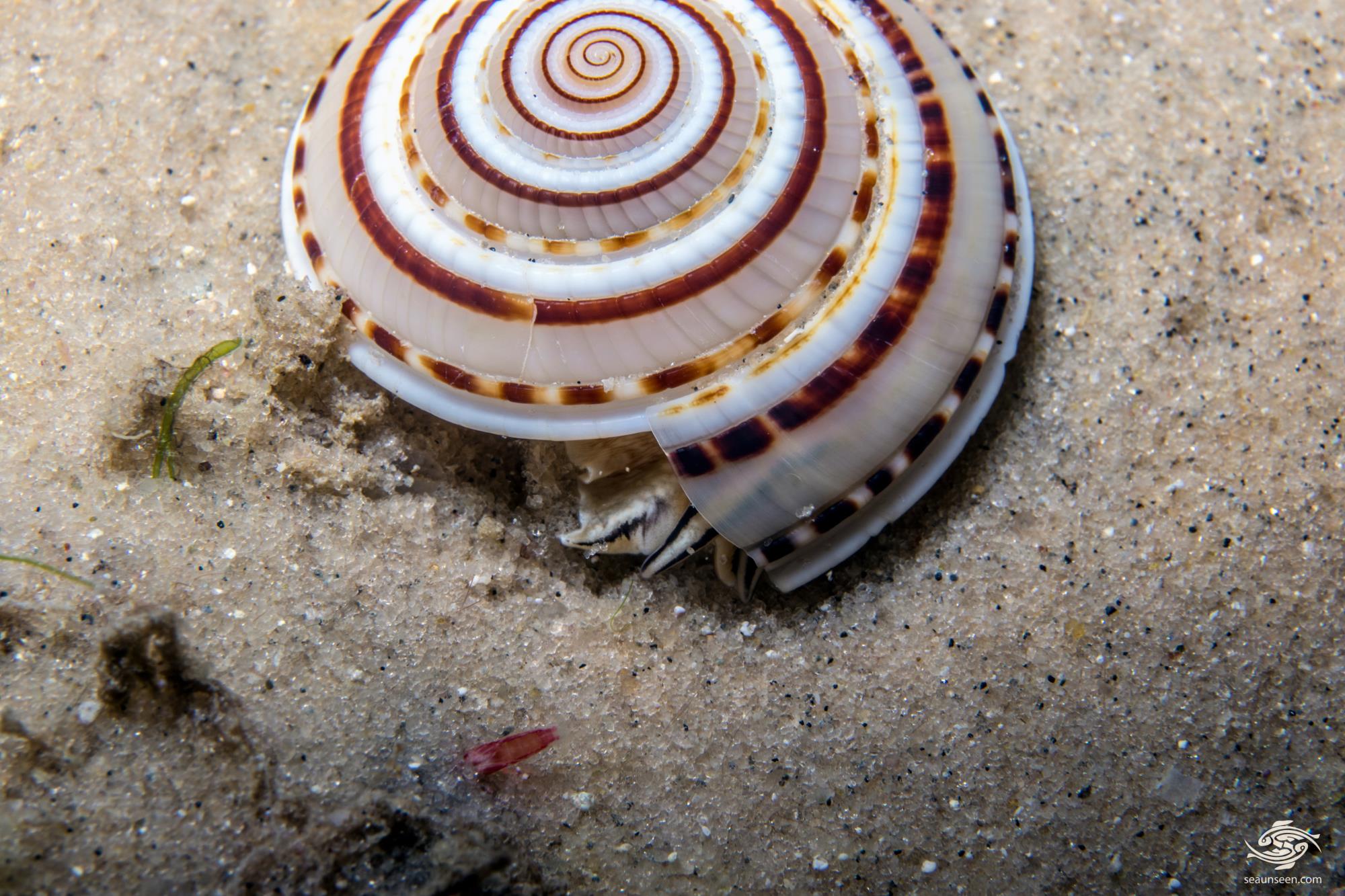 SUNDIAL SHELL IN THE WILD

Sundial shells are usually seen at night or towards dusk moving across open sandy areas.  There seems to be very little literature on these shells and there appear to be few if any studies done on them. 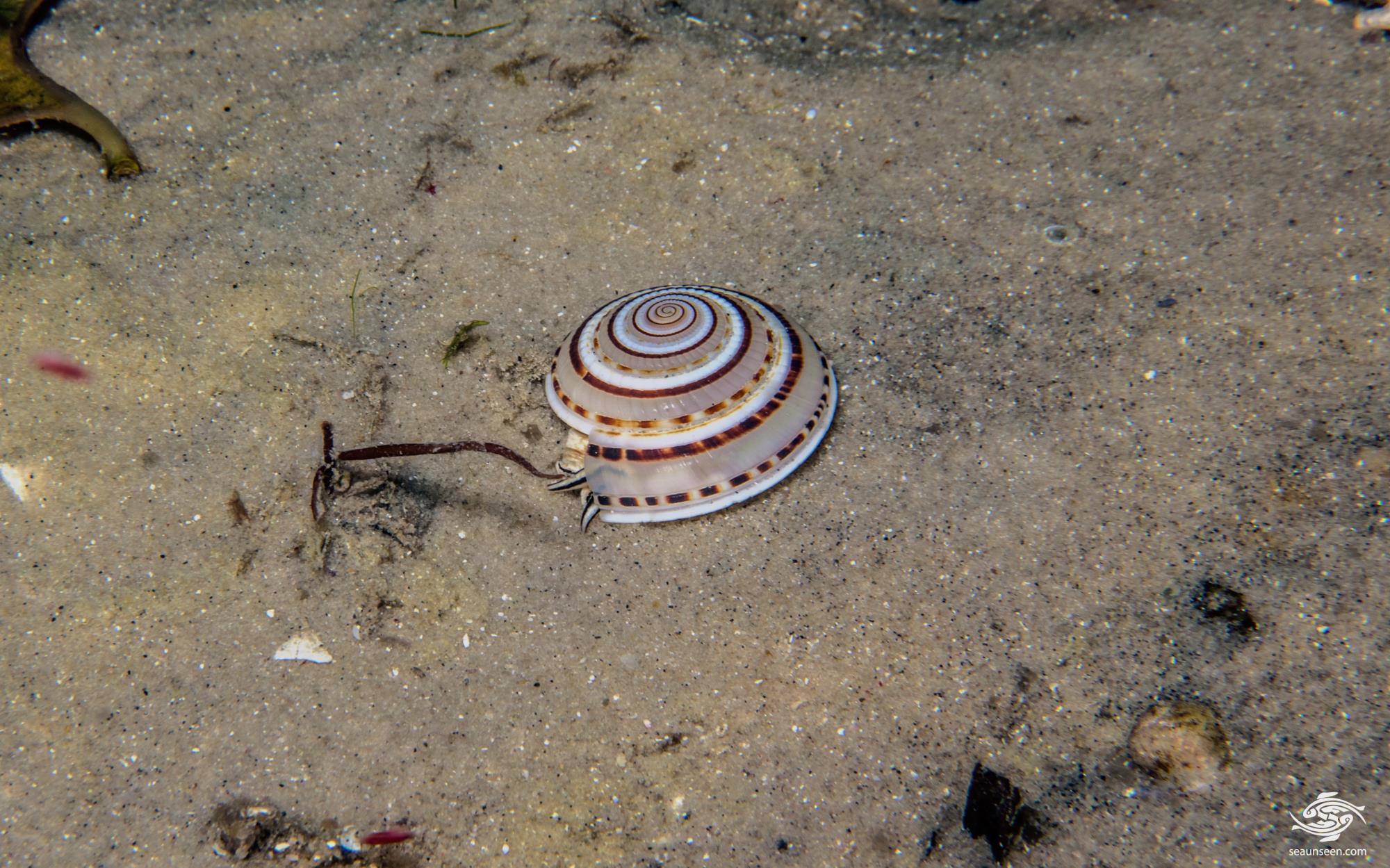 Sundial shells are common across the Indo-Pacific area and are reportedly more common from 30 meters to fifty meters in depth but shells have been dredged at over 100 meters.  The specimens in this post were photographed in some five meters of water on Mafia Island in the channel between the main island and Chole Island where they are reasonably common in summer. 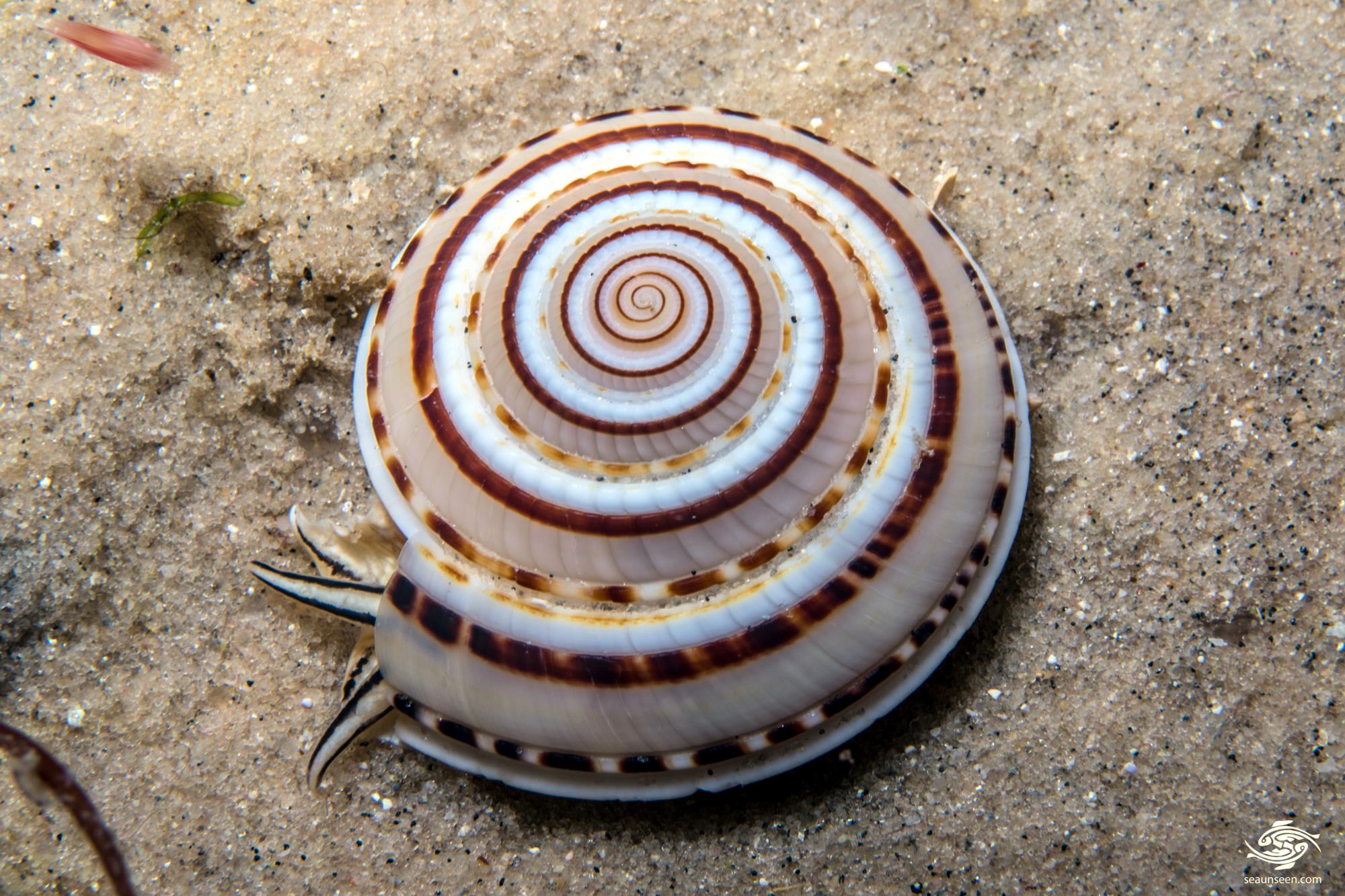 Sundial Shells are predators which feed on burrowing anemones , zoanthids, sea pens and some species of coral. 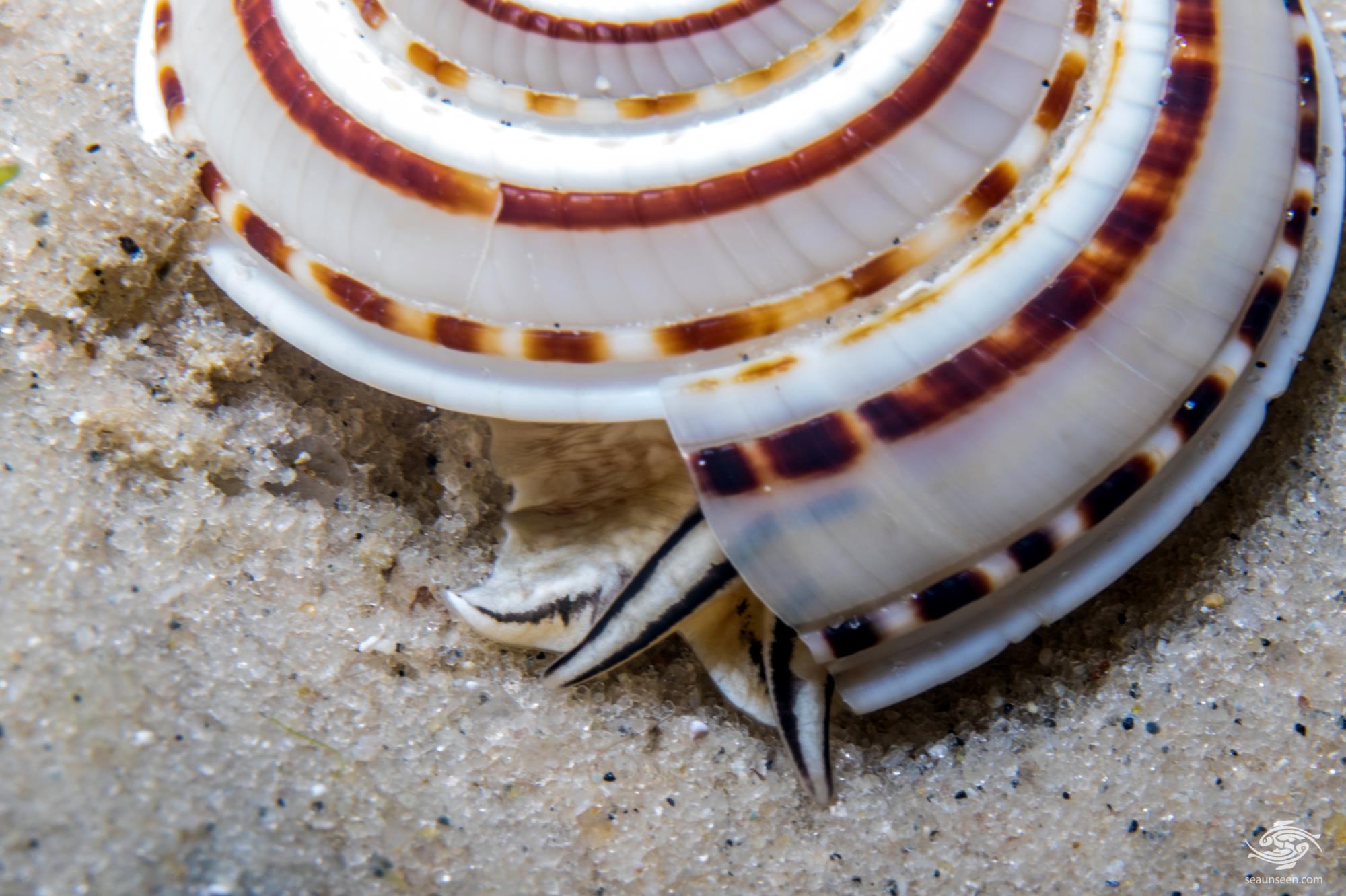 There seems to be no information published on their reproductive habits and for such a visible and attractive looking species this is unusual. 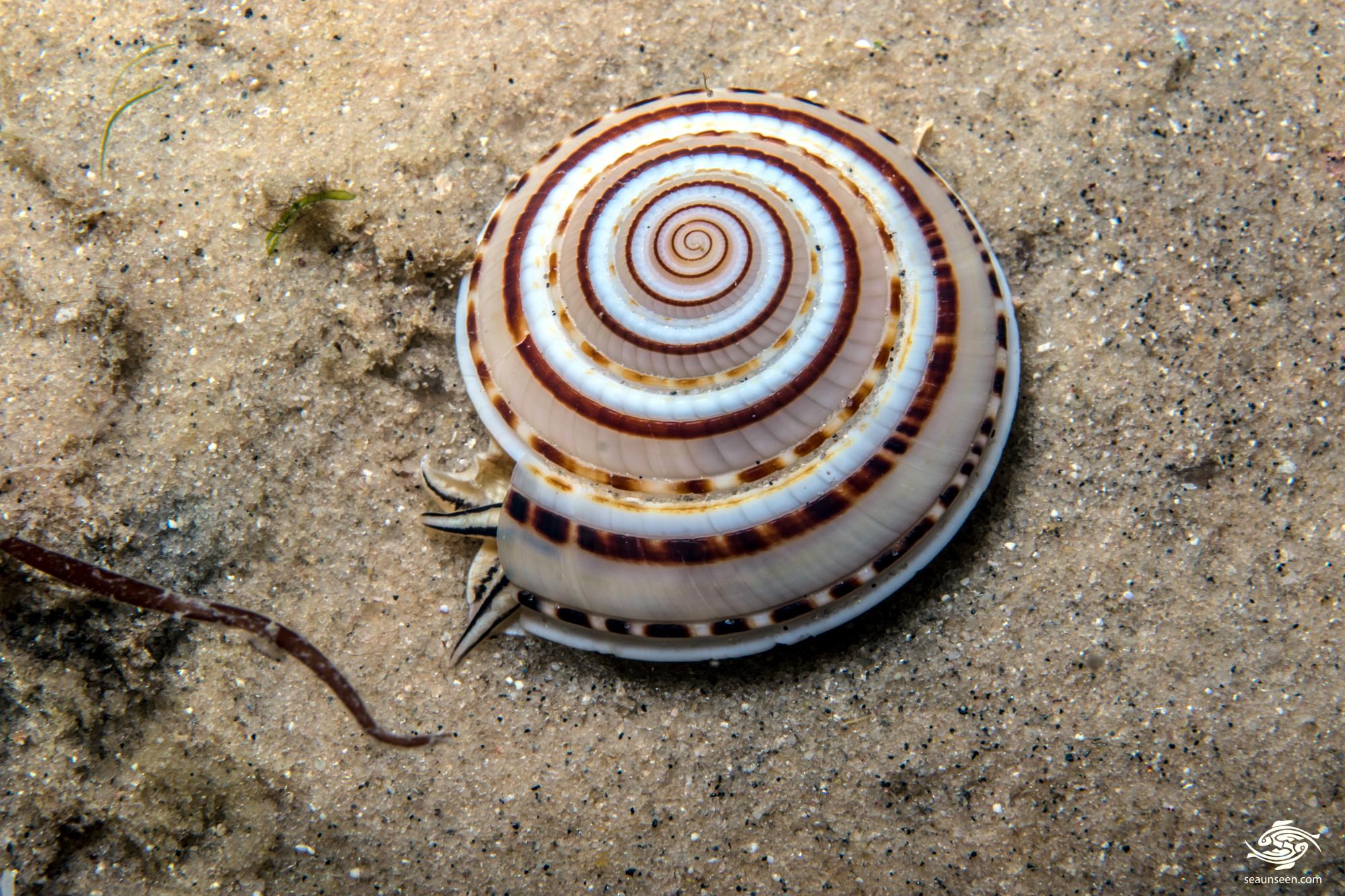 Once common throughout most of their range, they are now much less common due to shell collecting and destruction of their habitat through development and other activities such as dynamite fishing and dredging.

The shells are very attractive and are popular amongst shell collectors. They are however far more beautiful alive.  The shells are sold on many internet sites for approximately six dollars for ten large shells indicating that they are being harvested on a large scale somewhere in the world. Thankfully shell collecting is becoming less popular across the world as people become more environmentally sensible. There is however an unfortunate trend towards inanimate objects having healing powers and Sundial shells are sold by some websites on the basis of the ” healing vibrations ” they put out.