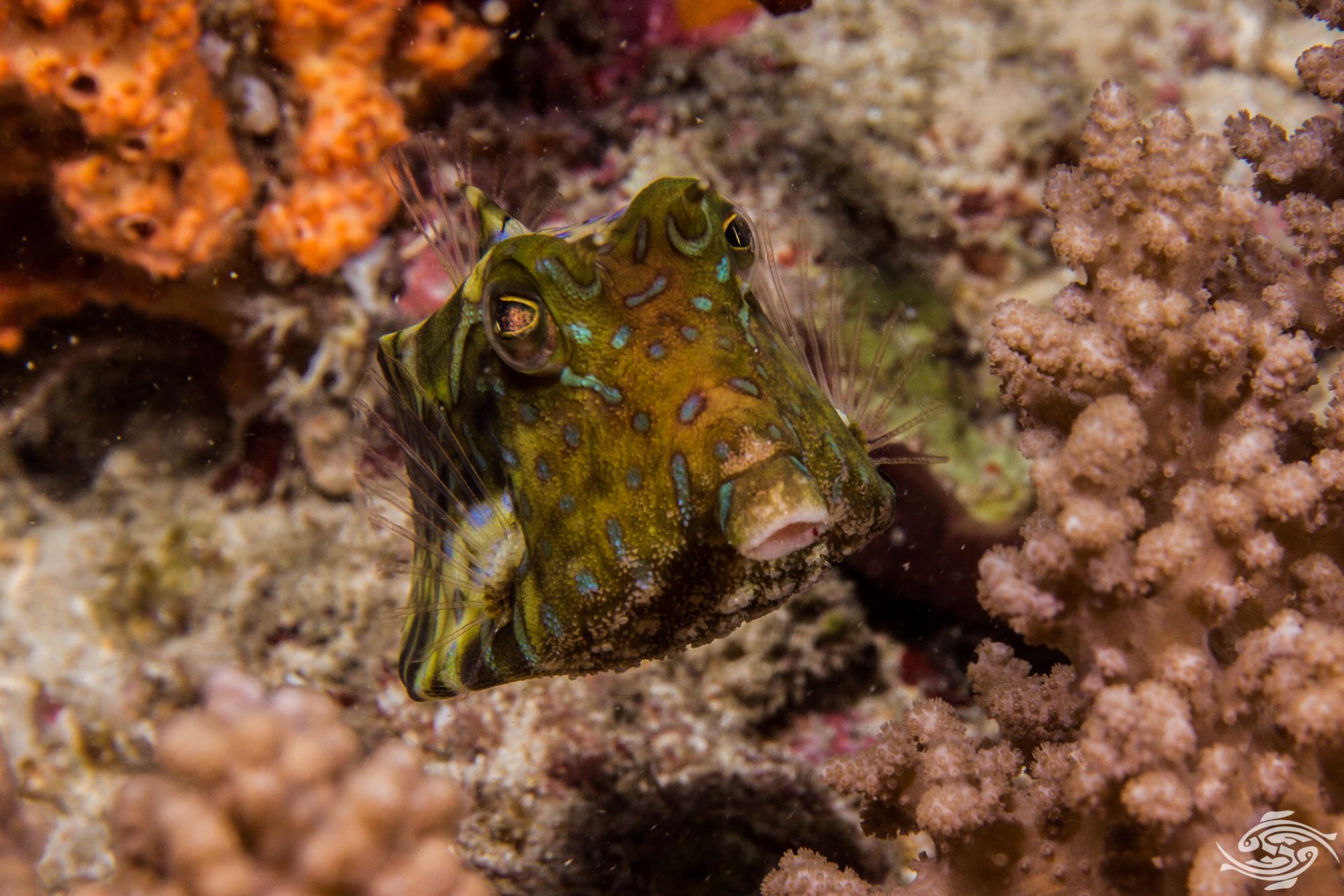 The Thornback cowfish, Lactioria fornasini is also known as the Spiny-backed Cow-fish, Thornspine Cowfish and the Thorny-back Cowfish. Their plate-like scales are fused together to form a solid box-like carapace and the fins, tail, eyes and mouth protrude from this. 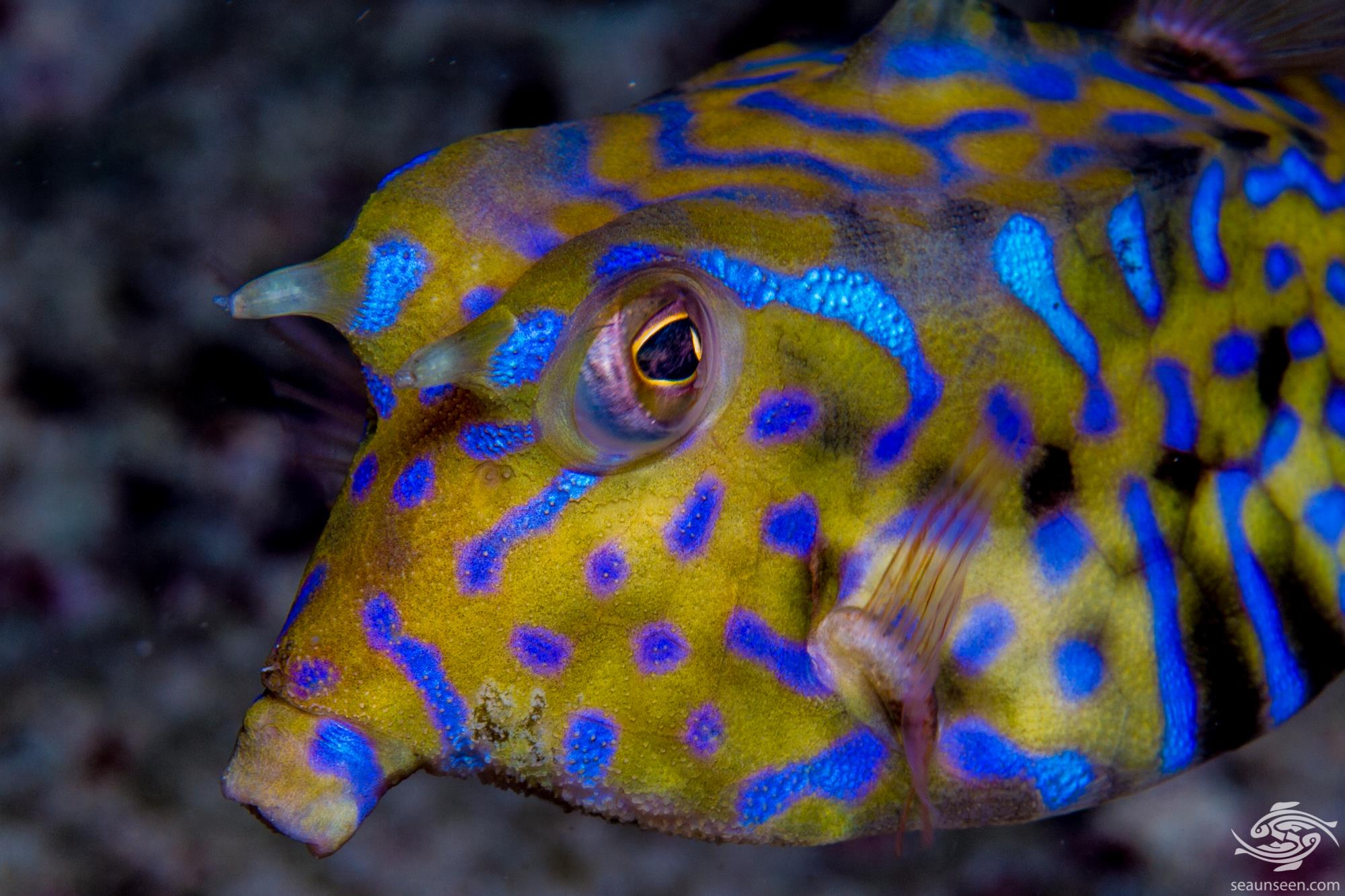 Due to the armor, the fish are slow moving and rely on their pectoral fins for propulsion. Cowfish are closely related to the Pufferfish or Blowfish. Although they do not have the ability to puff themselves up, they have similar toxins as to puffers. They have a symbiotic relationship with types of bacteria.

These bacteria produce ostracitoxin which is a powerful neurotoxin. The ostracitoxin’s are found in their skin and internal organs. In addition to being poisonous they have the ability to secrete the ostracitoxins into the water when stressed. This acts as a chemical defence when they are attacked by predators. 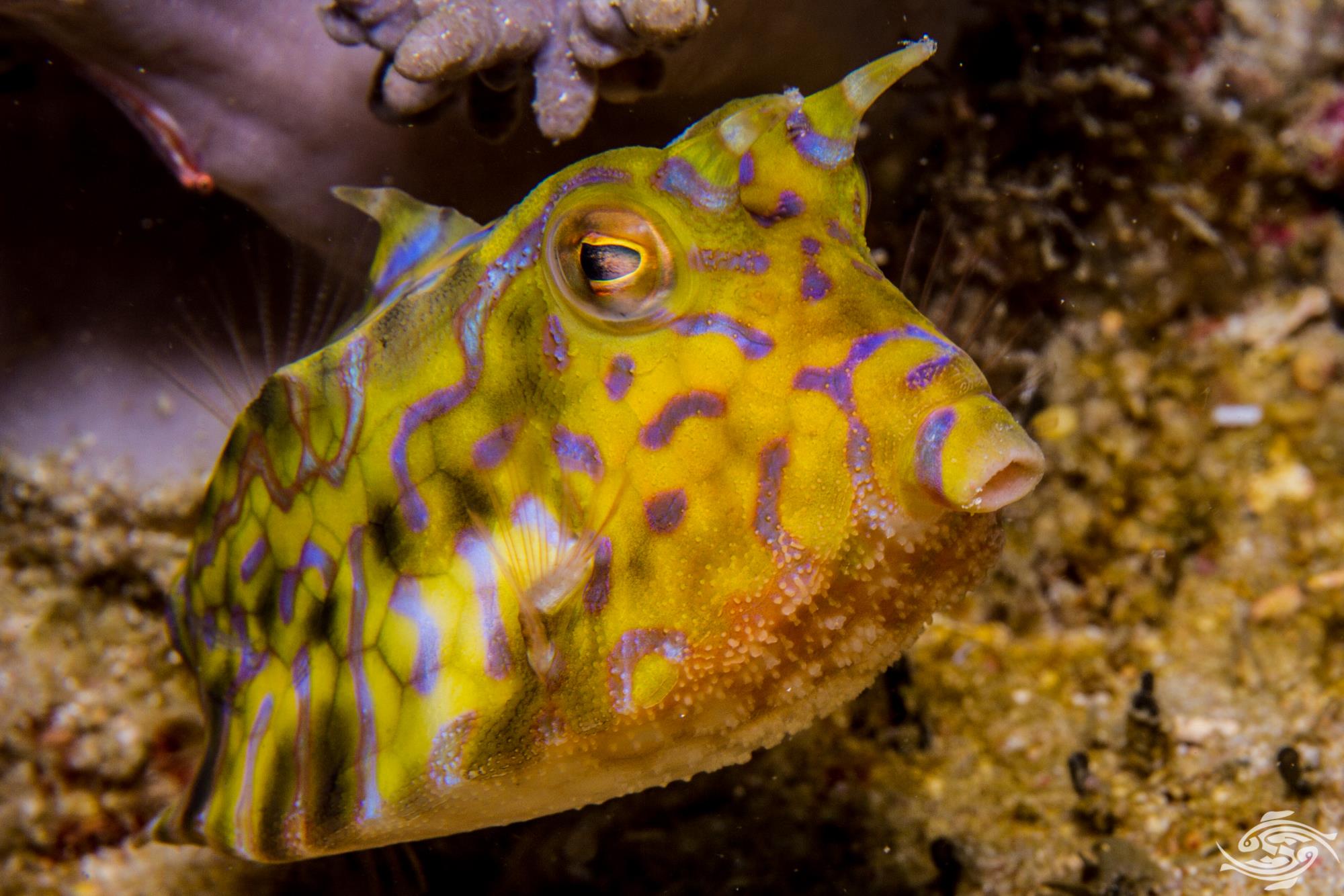 The Thornback cowfish have a very unusual box shaped body. Two spine like horns face forward above the eye and they have a tubular shaped mouth that protrudes forward. In the middle of their back they have a further spine pointing backwards. This resembles a thorn and gives them their name. On the lower rear section of the body two further spines face backwards.  The sides of the body are deeply grooved which streamlines water flow across the body. Their colors are highly variable and they are able to change color to camouflage themselves.

The upper body and sides are covered with a series of  hexagon markings usually in a brown black colour. The background colors vary from a yellow or green yellow with blue markings to a grey with blue marks. Sometimes the blue can be replaced with a purple colour. The facial area is a similar colour to the rest of the body, but without the hexagonal markings. They grow to roughly 15 centimeters (5.9″) in length. 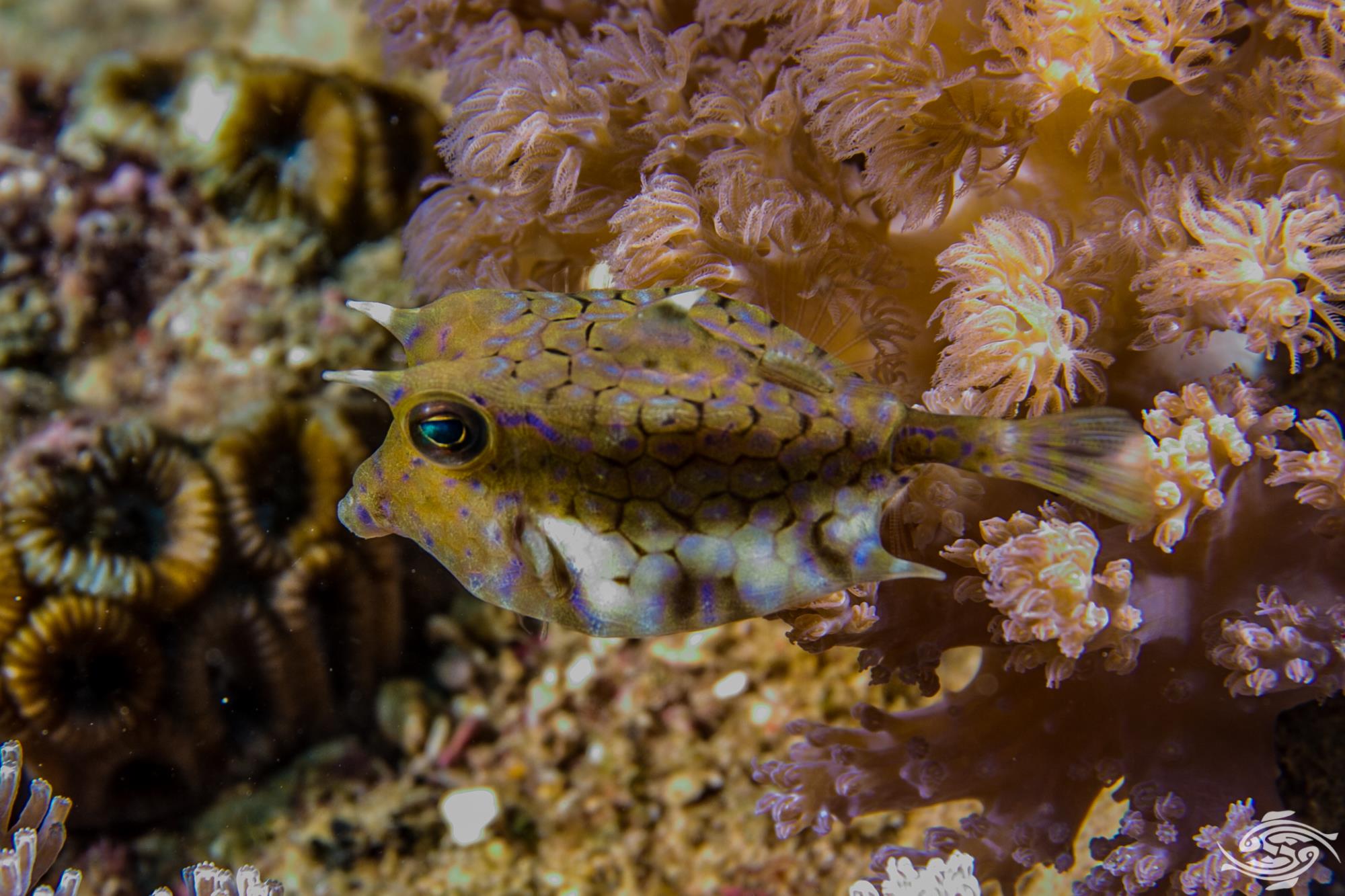 As with most boxfish the Thornback cowfish is quick to hide in any convenient hole or hiding spot when approached and will often turn once in its hiding place, hovering in position to view the diver. They usually swim low on the substrate and often hide in soft corals when they see a diver. 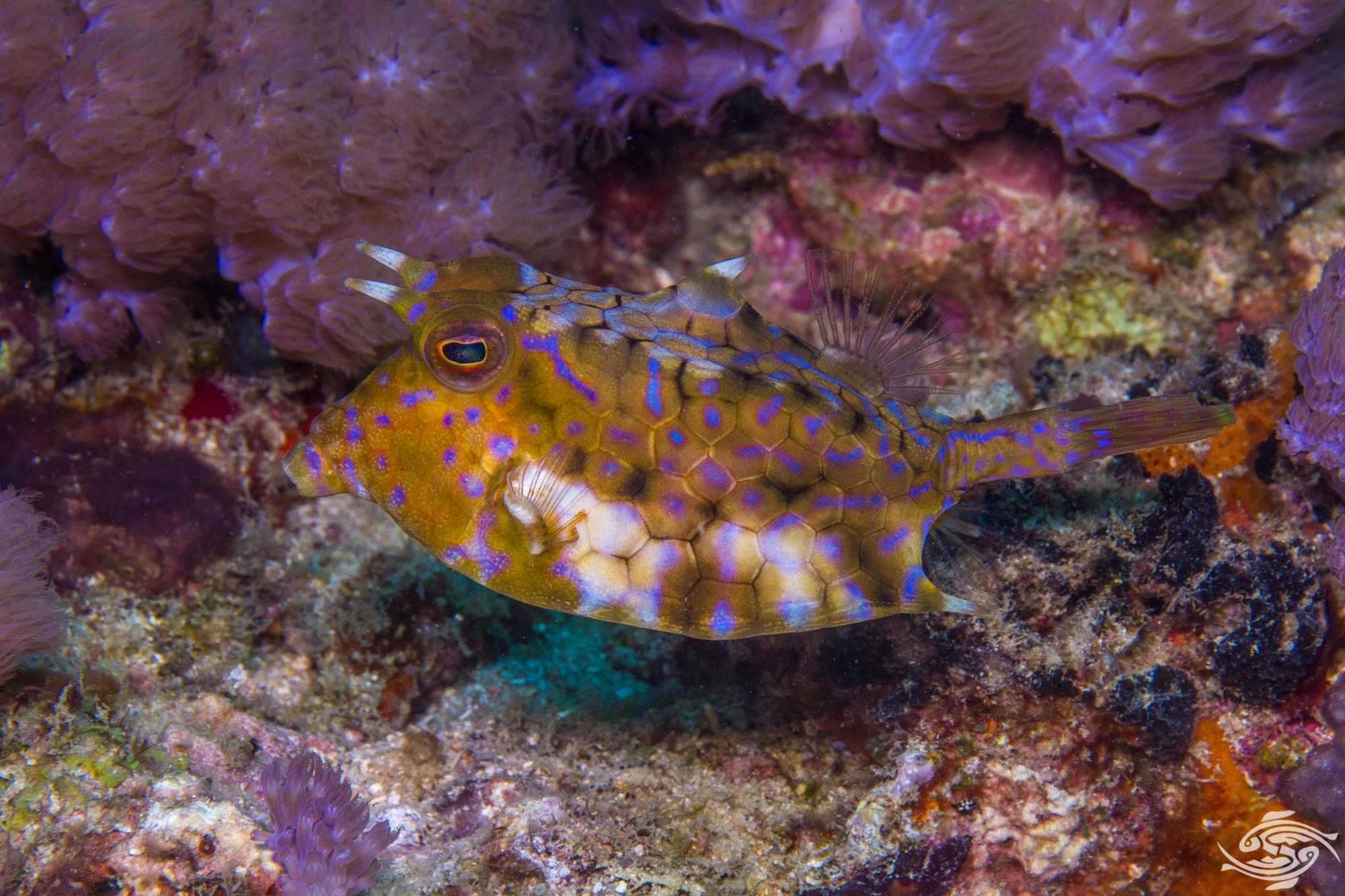 Thornback cowfish are found across the Indo pacific area. They are found mainly on seaward semi protected reefs from a depth of 1 to 30 meters although they are more common between 12 to 18 meters. 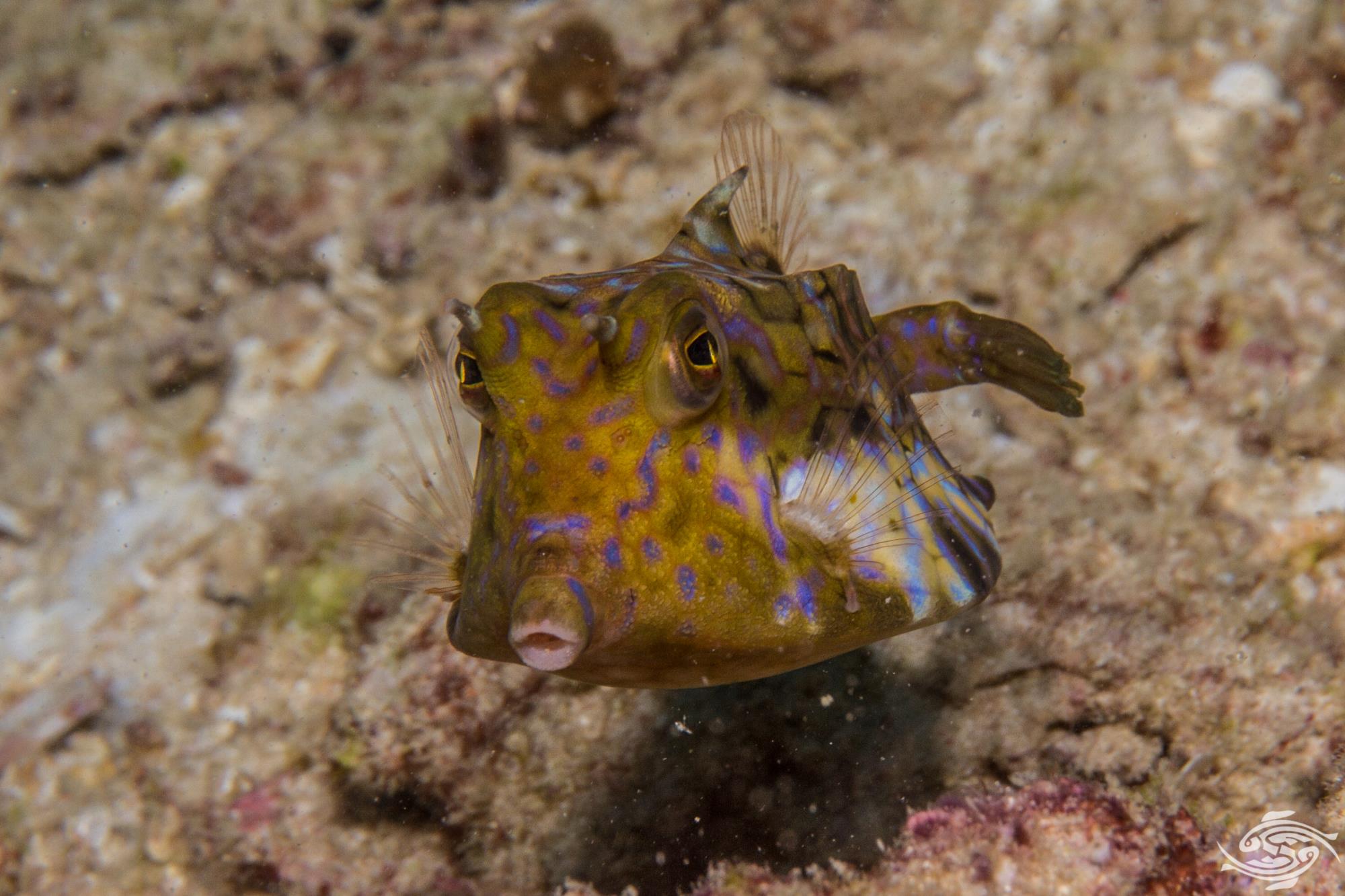 The diet of the Thornback cowfish consists of small invertebrates. They use their tubular shaped mouth to siphon their prey into their mouths. Most of their feeding is done across the bottom but occasionally one sees them feeding slightly higher on coral bommies. 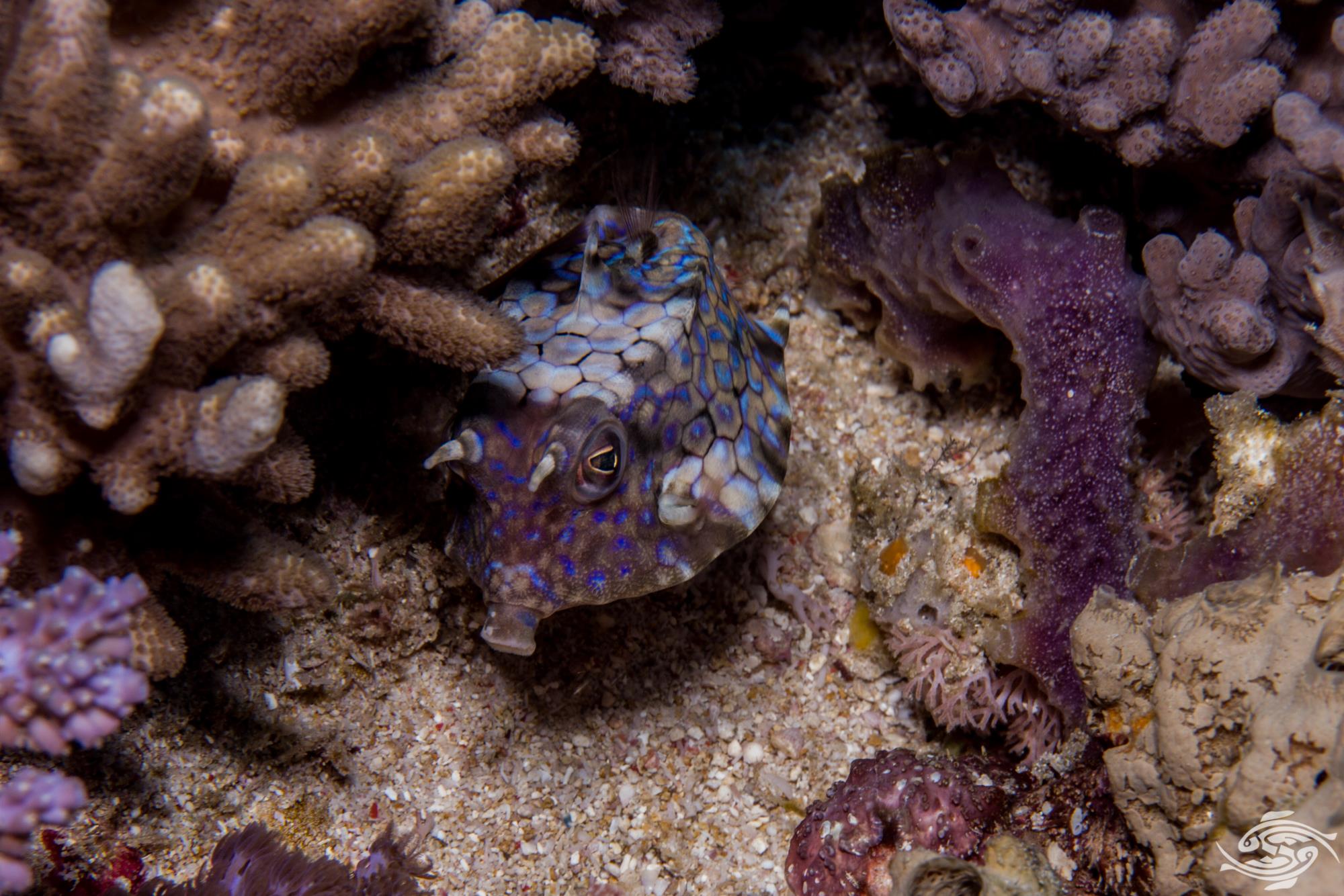 The male Thornback cowfish are territorial and are thought to have several females in their territory. When breeding takes place the eggs are released into the water table. Once the eggs hatch, the fry develop into small boxfish. They have been captive bred. 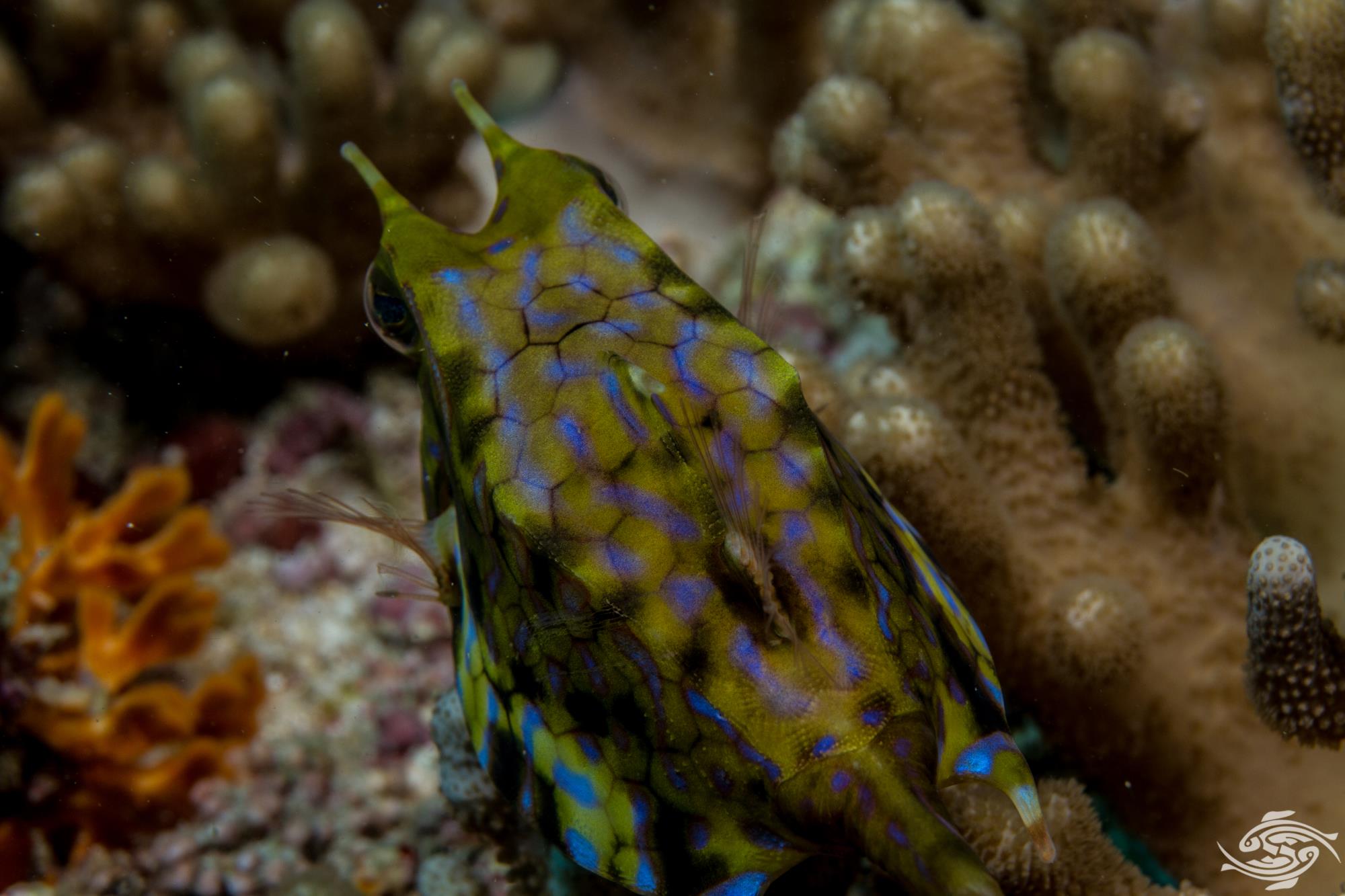 Thornback cowfish can release toxins into an aquarium and should only be kept by experienced aquarists. They can easily destroy an aquarium if they release toxins. Sudden movements or loud noises  can stress them and they are not suitable for high traffic aquariums. For aquarists who decide to take the risk of keeping this particular species of cowfish, they should ensure that the boxfish is not stressed in any fashion by other fish. Keeping a large amount of water in reserve in case a water change is necessary may also be a good idea.

Thornback cowfish are now being captive bred. Research done in Japan on pufferfish has identified the bacteria which create the toxins within them. By keeping these bacteria out of their diet of commercially bred pufferfish, they no longer produce the toxins.  Captive bred specimens of the Thornback cowfish should theoretically not pose a risk in tanks. This may lead to them becoming more popular in the future.

Cowfish have plenty of character and can be a fun fish to have in an aquarium. They are relatively easy to move onto frozen foods, flakes and algae. They may attack certain corals but are peaceful with other fish species. 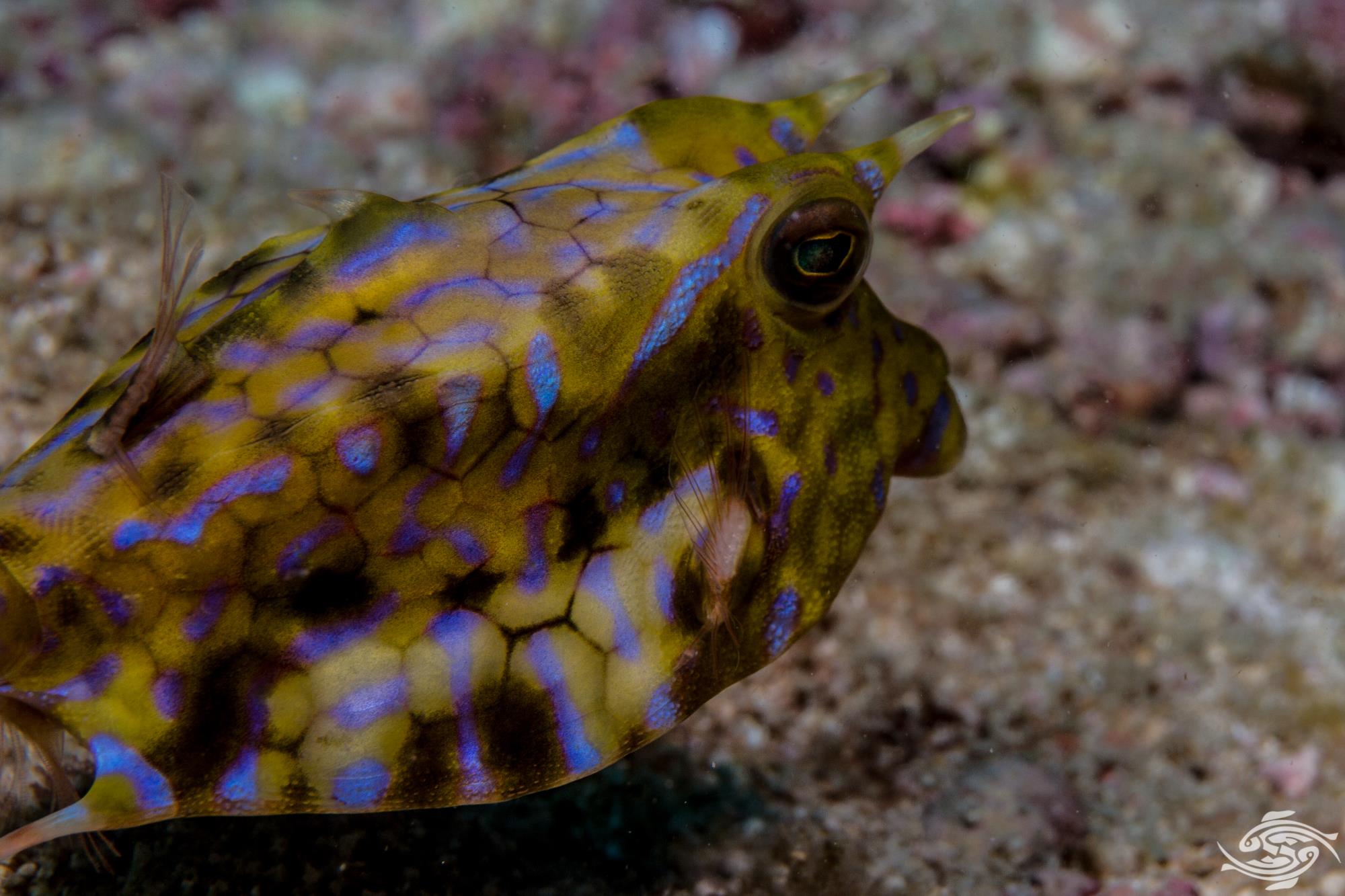 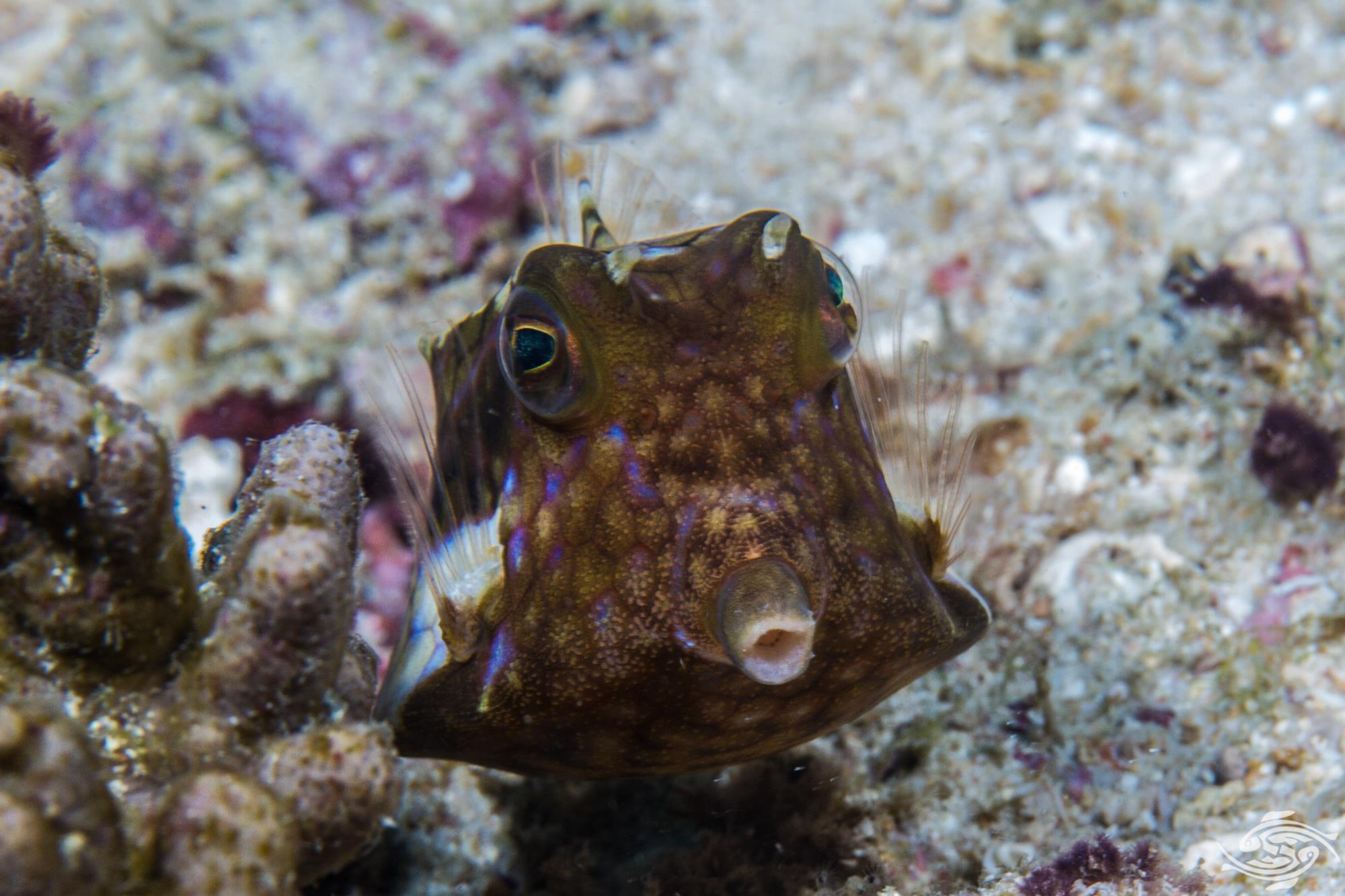