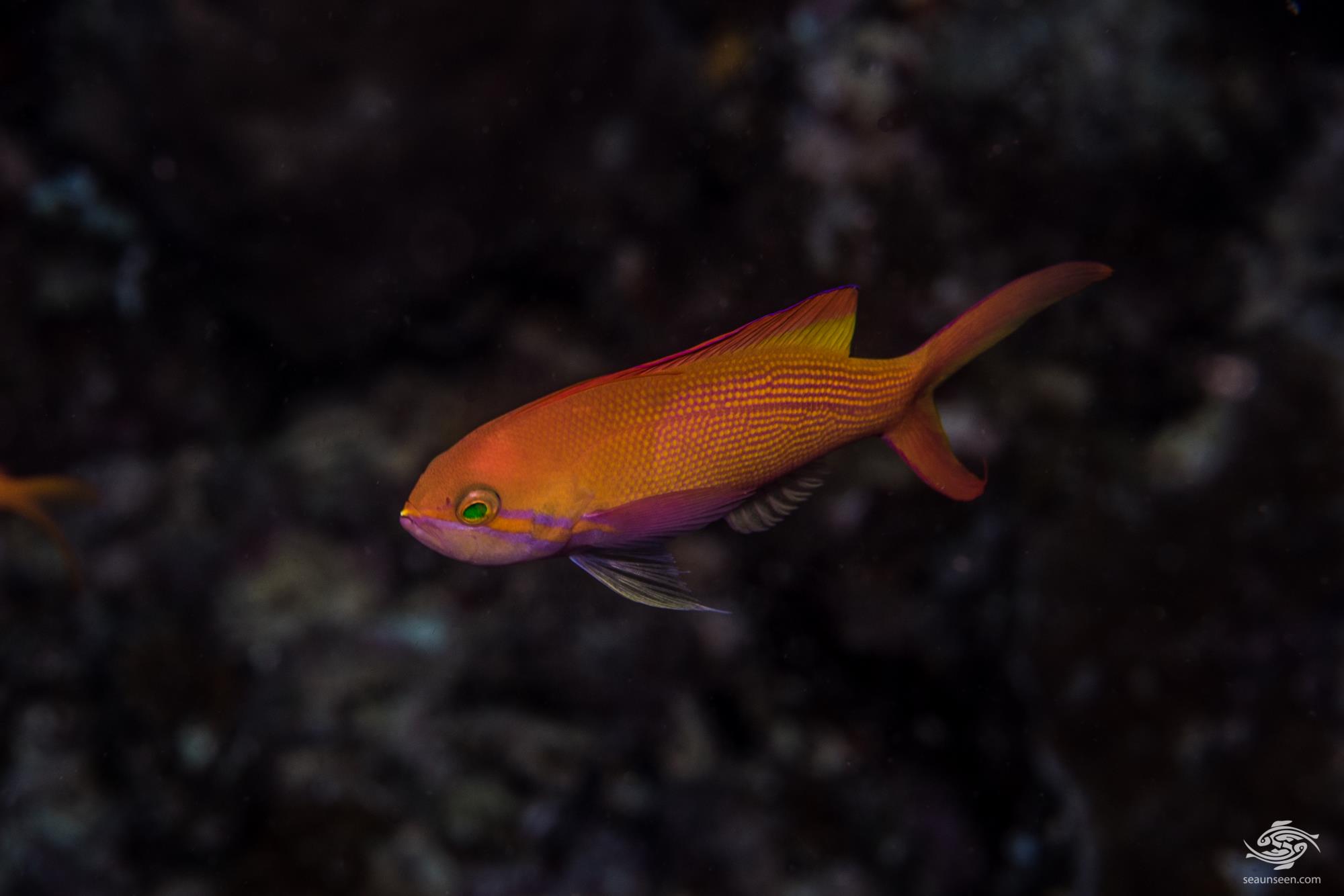 The Threadfin Anthias (Nemanthias carberryi) is also known as the Threadfin Goldie and Carberryi Anthias. They are not at all common in Tanzanian waters and we have only found them in a few locations on walls and features to the east of Mafia Island at around 35 meters downwards and on walls to the east of Fanjove Island.

Threadfin Anthias are the only species in the Nemanthias genus and were described by JLB Smith in 1954.  There are a considerable number of color variations across their range and even in a small area such as Mafia there are variations in the colors in the shoal.  If one looks at the images of Threadfin Anthias in the Fishbase website one can get an idea of the variations between the different areas. At the bottom of the post are images of the color variations we have found swimming among the shoals. There is considerable variation as one can see. 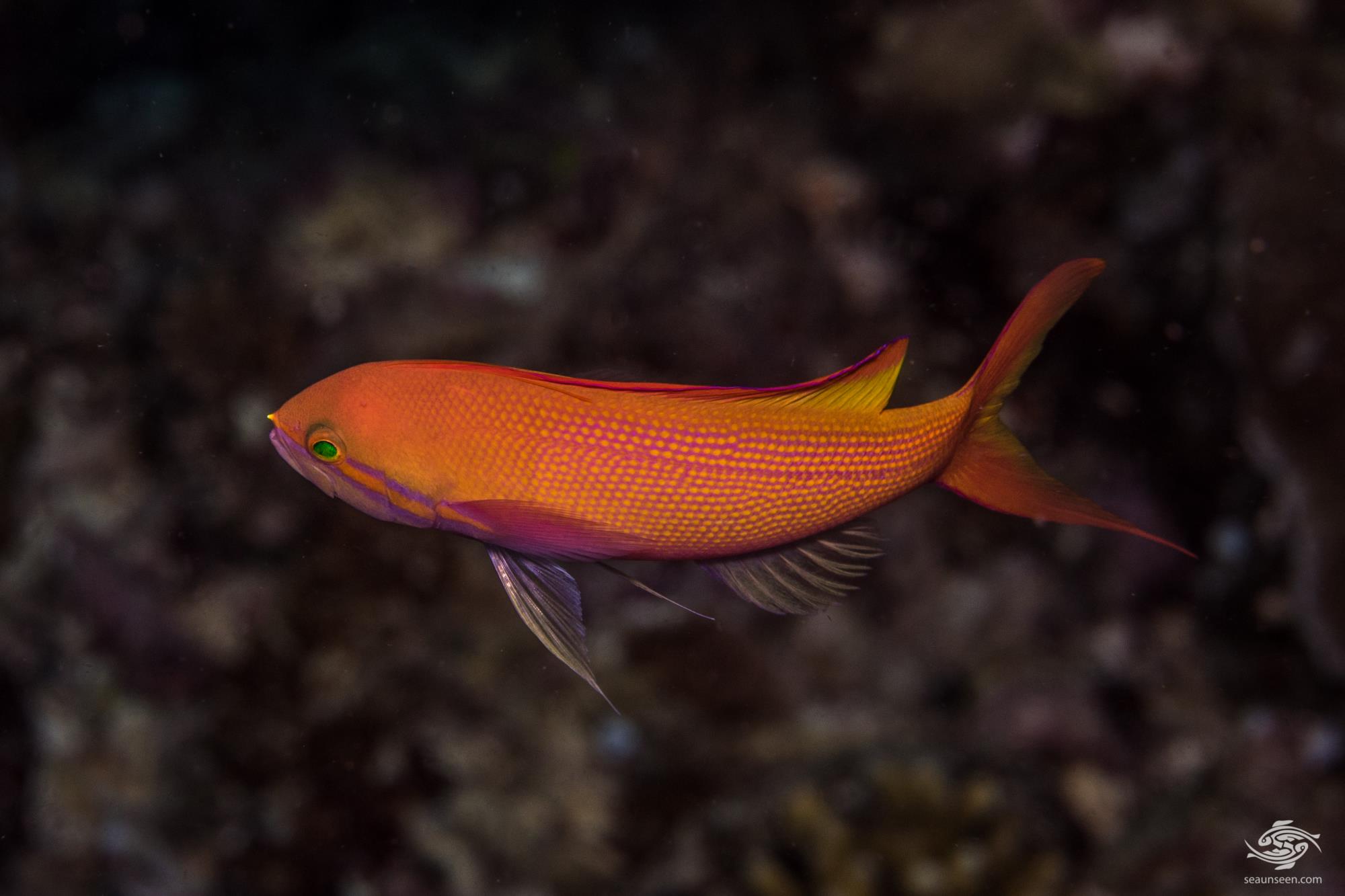 The Threadfin Anthias has a fairly typical Anthias shape but is more slender. They exhibit sexual dimorphism with the females being smaller than the male. Essentially there is considerable variation in the colors, the specimens in the images in the post have the average coloration of those found in Tanzania and those in the bottom section under color variations in the same shoals are quite different.  They grow up to 14 cm in length. 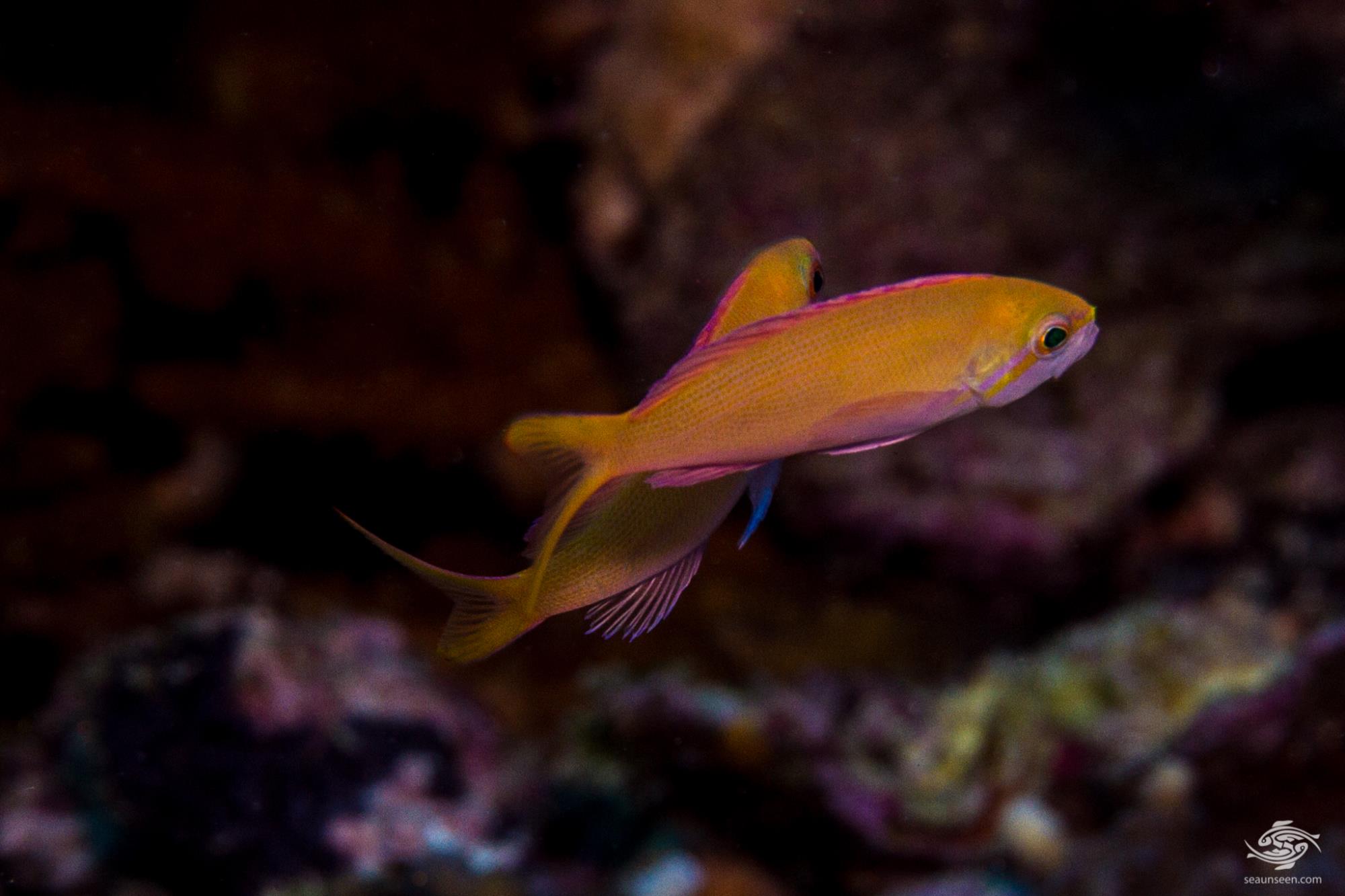 THREADFIN ANTHIAS IN THE WILD

The Threadfin Anthias often shoal with the common Sea Goldies (Pseudanthias squamipinnis) and sometimes the shoals are mixed.  In other areas they are in isolated shoals of some hundred odd fish with no other species present. They are relatively easy to get close to and as long as one does not make any sudden moves they will generally mill around without going into hiding. 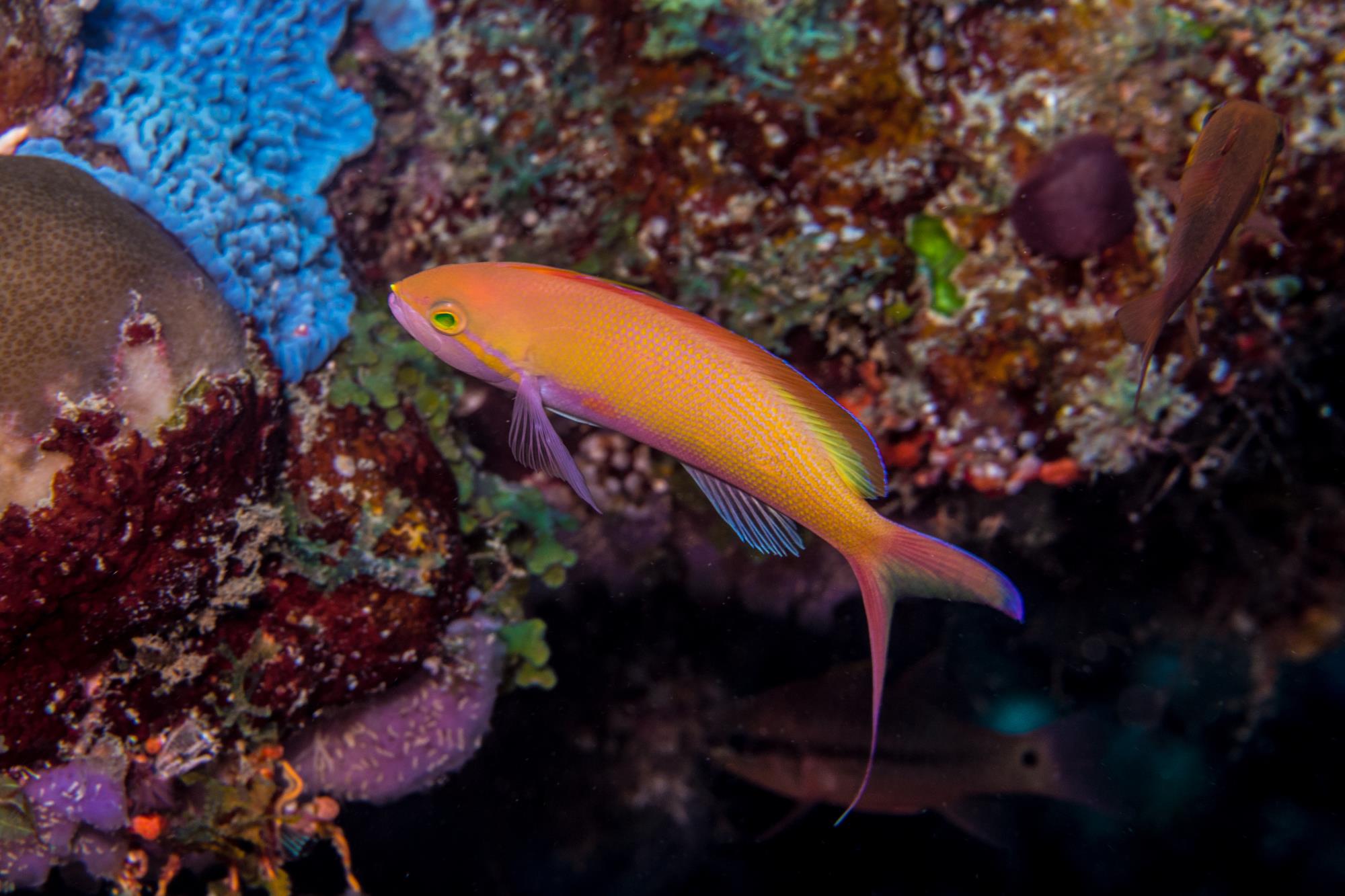 Threadfin Anthias are only found in the western Indian Ocean from South Africa north to Somalia, parts of the Red Sea,  parts of the Arabian Gulf, across to the West Coast of India including Madagascar,  Comoro’s and the Maldives. 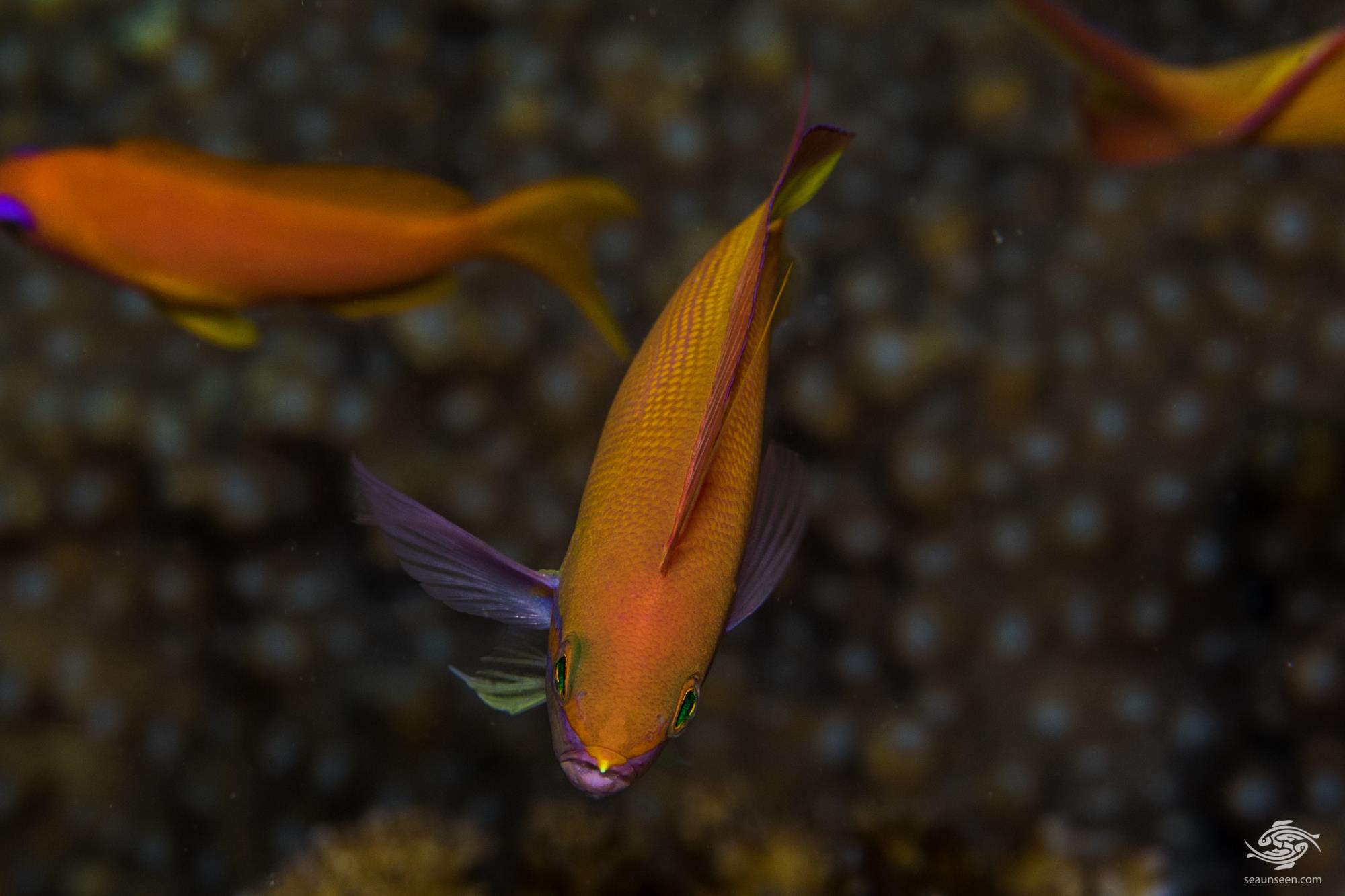 The main diet of the Threadfin Anthias is plankton.  They usually shoal close to a feature and make short darts into the water table to feed on plankton. 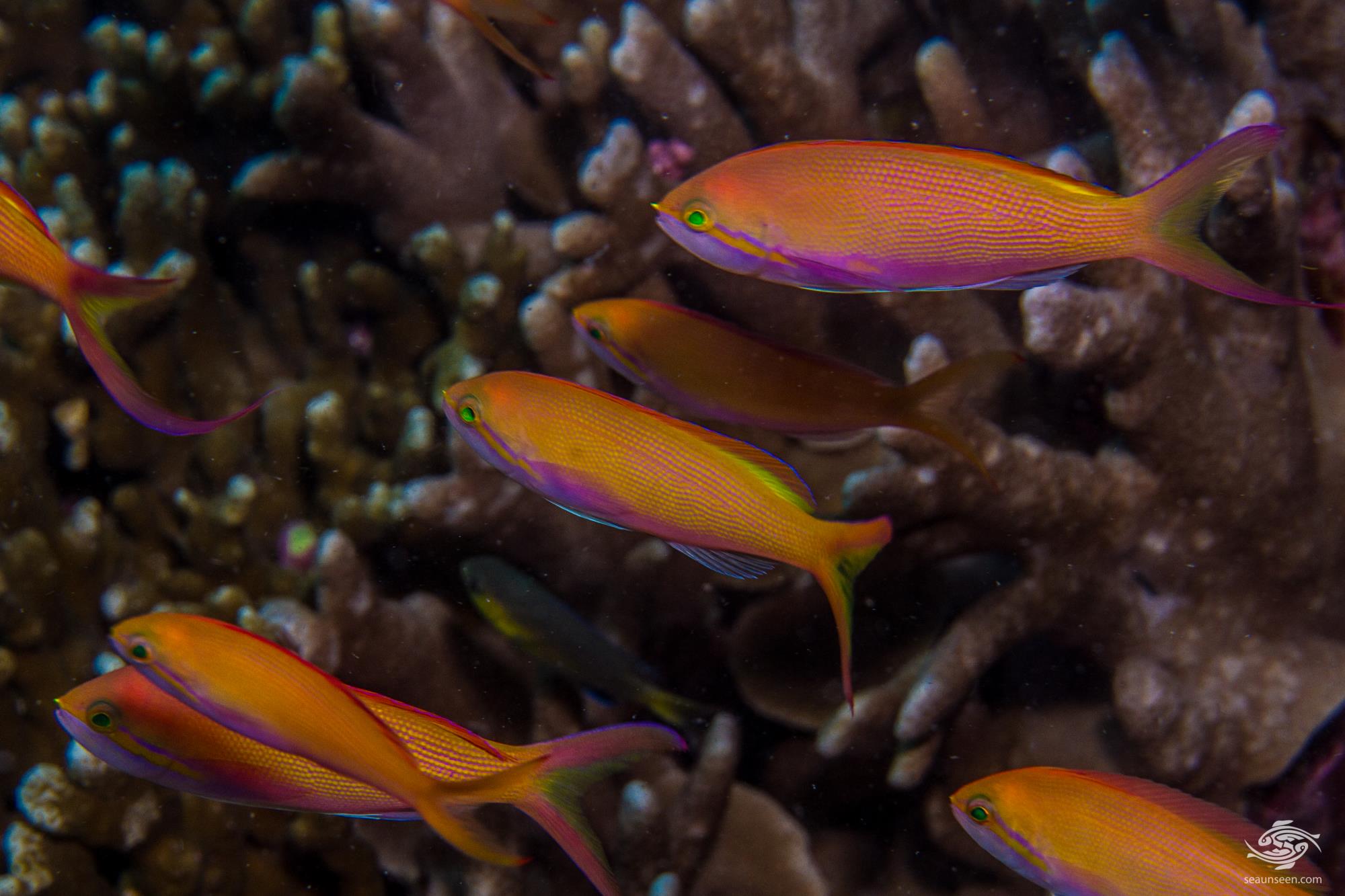 Threadfin Anthias are found in shoals with haremic groups of a male and several females. Spawning takes place between couples. If the male for some reason disappears then the dominant female will turn into a male. 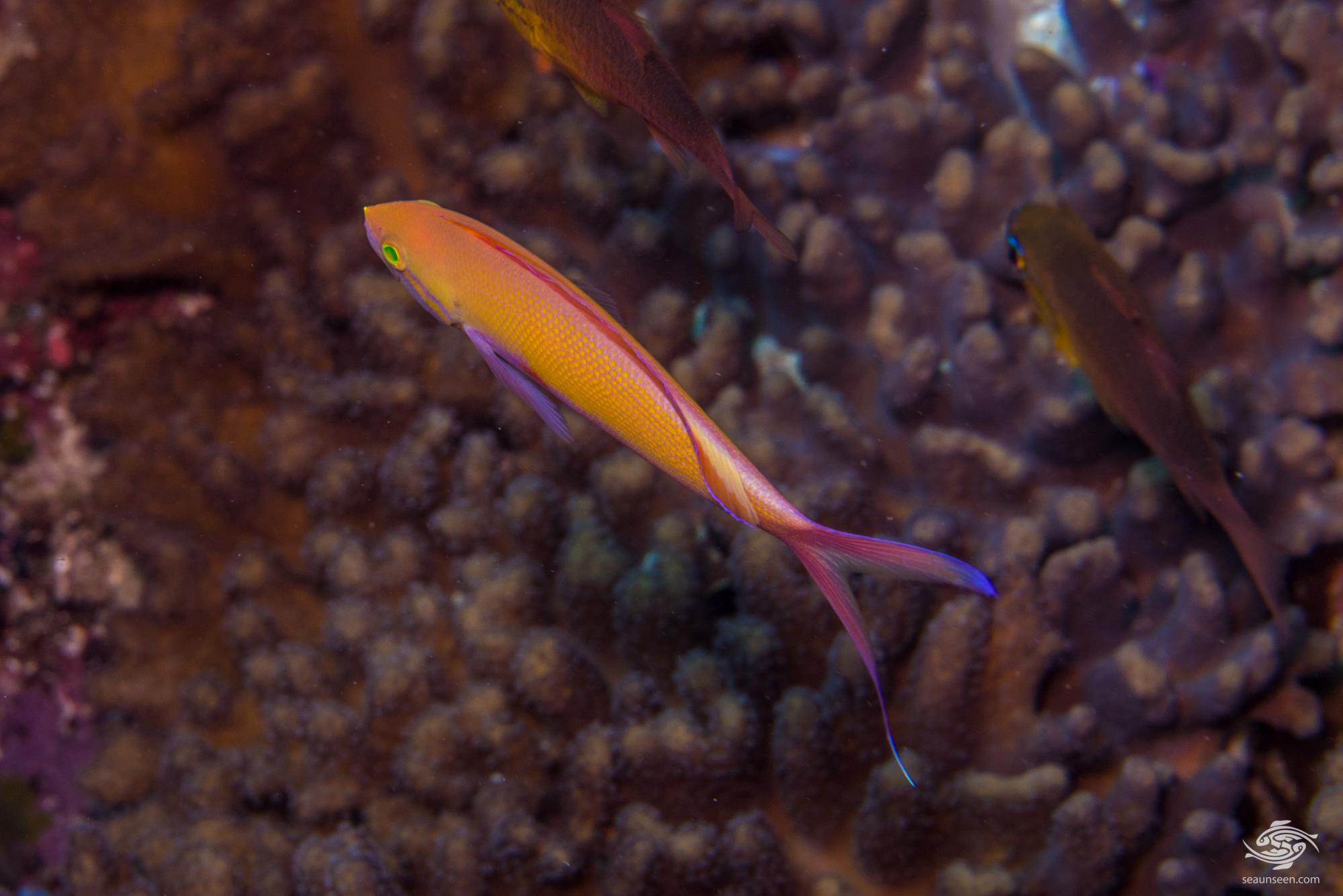 Threadfin Anthias are fairly common in the trade, mainly being caught in the Maldives. They are best kept in small groups , if there is no male in the group the largest female will change into a male. They feed in the open water above the substrate and will be happier if they have some swimming room in the tank along with some good hiding places. They may jump so a well sealed tank is a good idea. They are relatively easy to keep and feed. Good article here on them.

The bulk of the Threadfin Anthias fish in the shoals are as seen above.  Swimming within the shoals we have found the specimens below.  It is difficult to pick out a single fish swimming in a shoal so some of the images are not good. Also fish in the shoal obscure other fish.  These specimens have all been at around 35 meters and one cannot stay there too long. 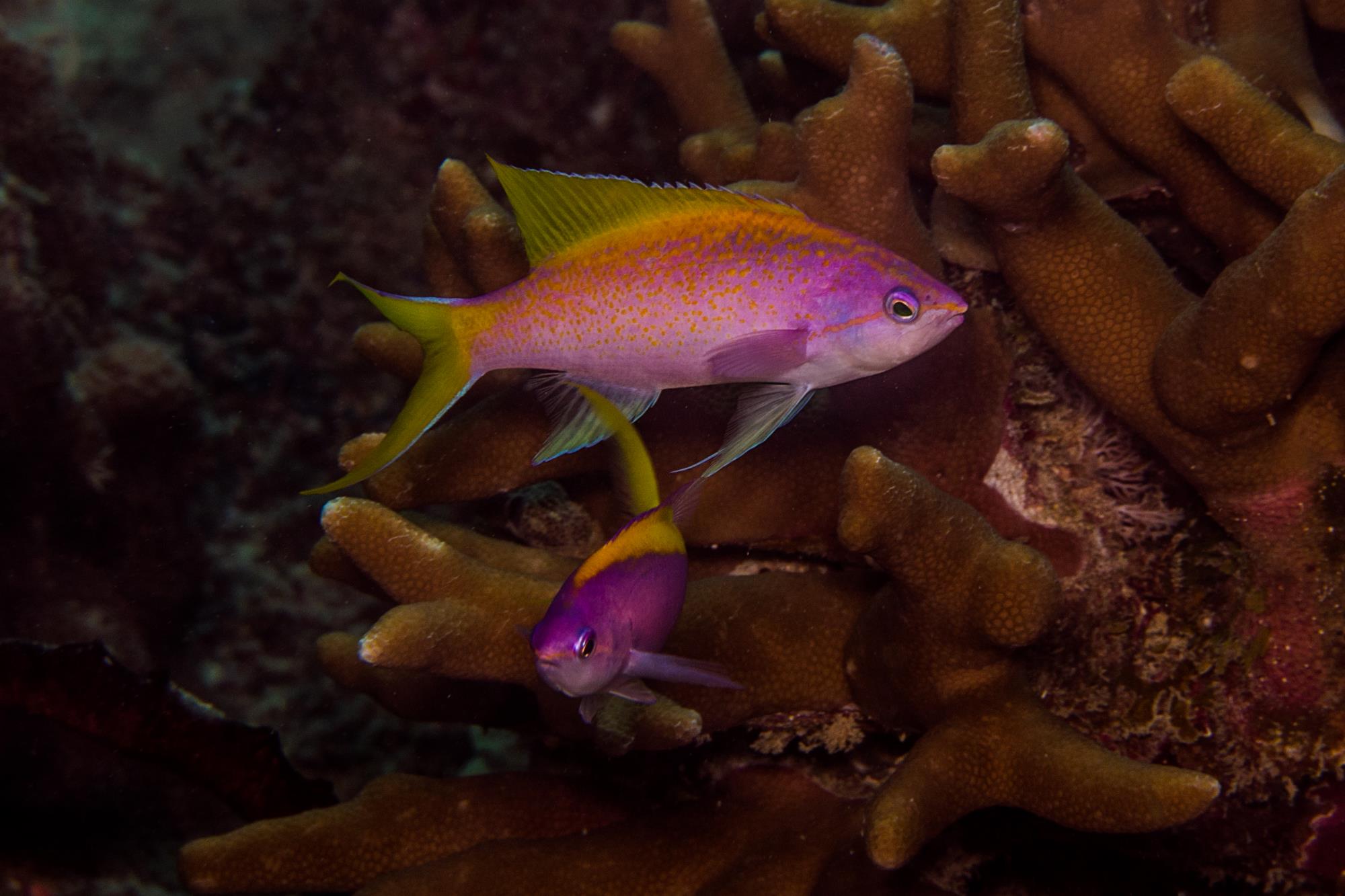 Two specimens above with unusual color variations swimming within the shoal, both were stunning looking Threadfin Anthias fish. The bottom specimen had purple across the body with yellow across the dorsal area. 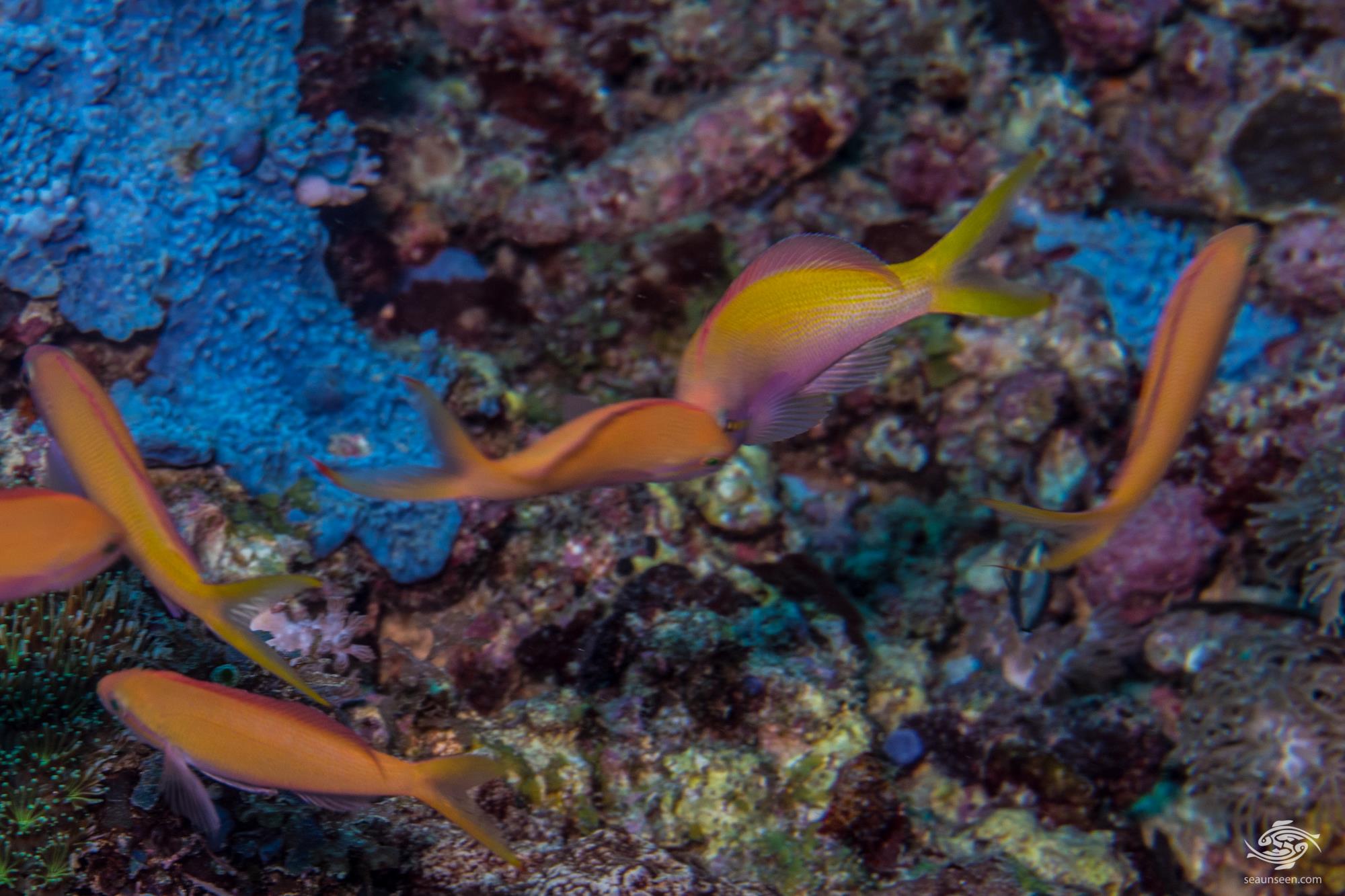 The specimen above was far lighter and more yellow than the others, unfortunately photo bombed by another Threadfin Anthias fish. In the image below some of the females are green  around the head area. 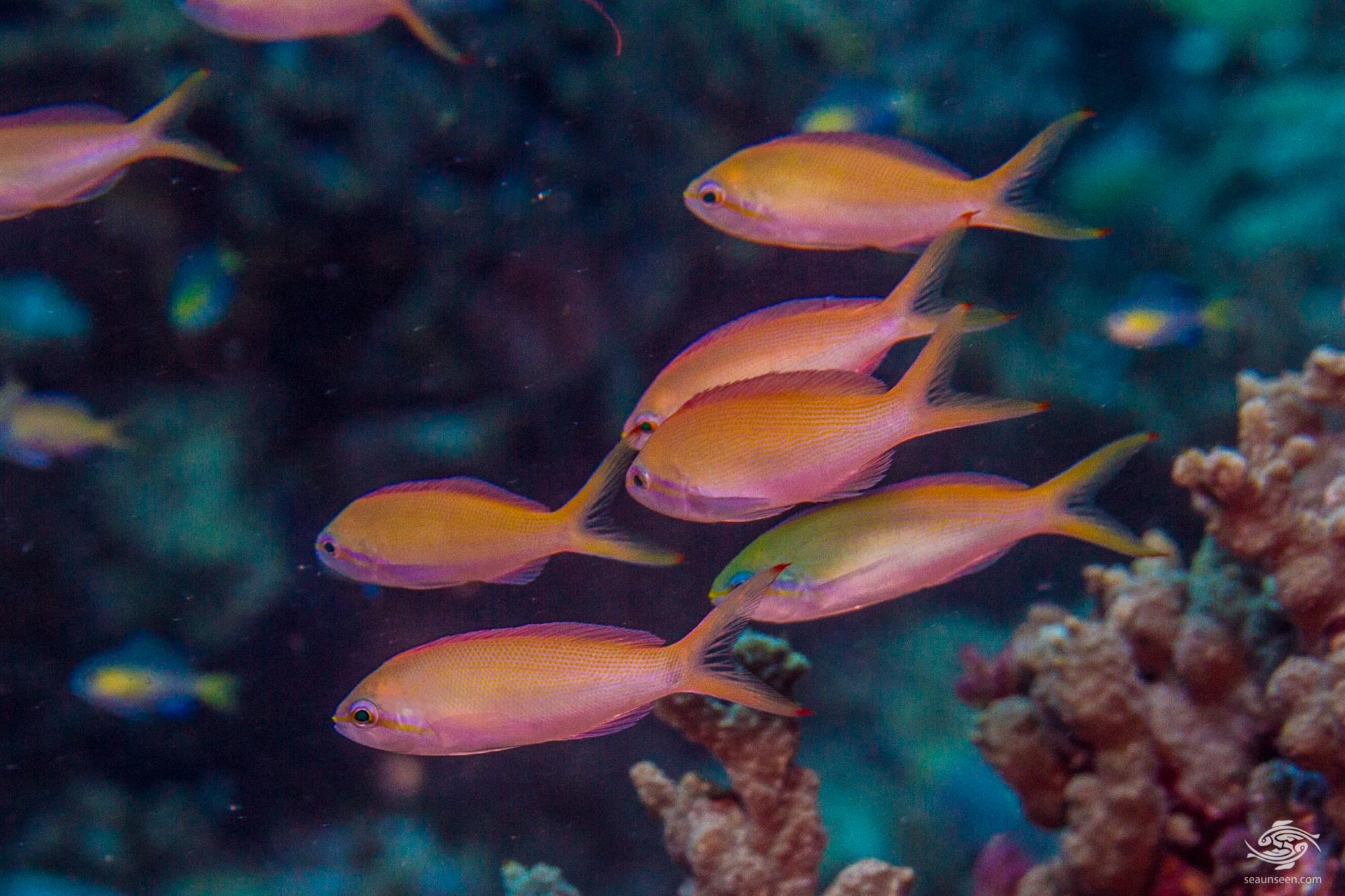