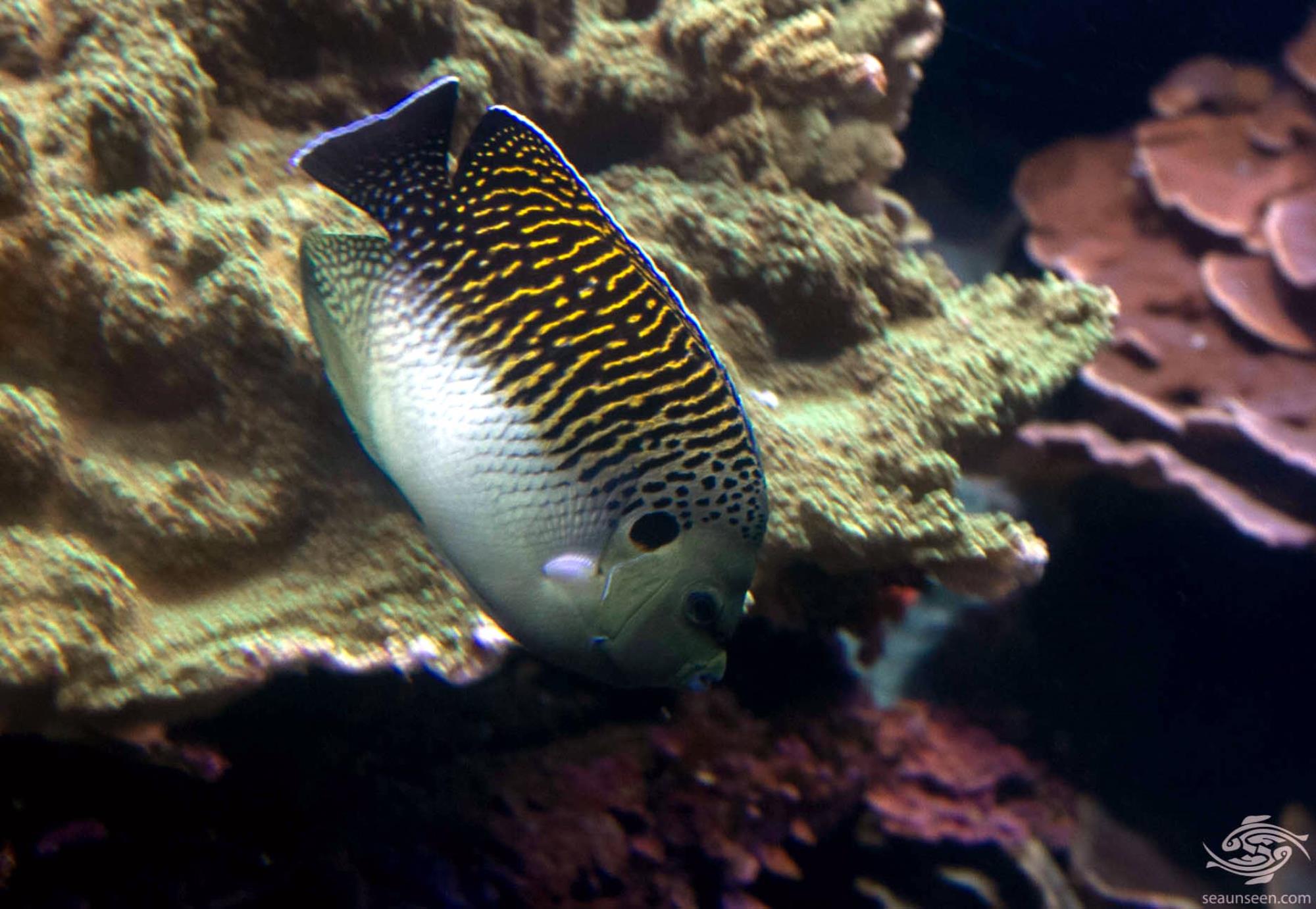 The tiger angelfish Aploemichthys kingi is one of the lesser known angelfish. As their name implies they are quite striking fish and are highly sought after by specialist marine aquarists.

On the adult the upper part of the body and caudal fin are a dark brown to black color with irregular wavy verticle yellow lines that become dotted towards the caudal fin. Towards the head the black goes into dotted lines and there is a prominent black dot behind the gill. The lower body is white or silver and dotted black lines extend down the lower body. There is a prominent black line between the eyes. A white line extends across the top of the dorsal fin and around the caudal fin. The mouth protrudes slightly.
Adults grow to around 21 cm in length. Juveniles which are seldom seen, resemble a butterflyfish and have a prominent black eye spot ringed in yellow on the rear of the body. 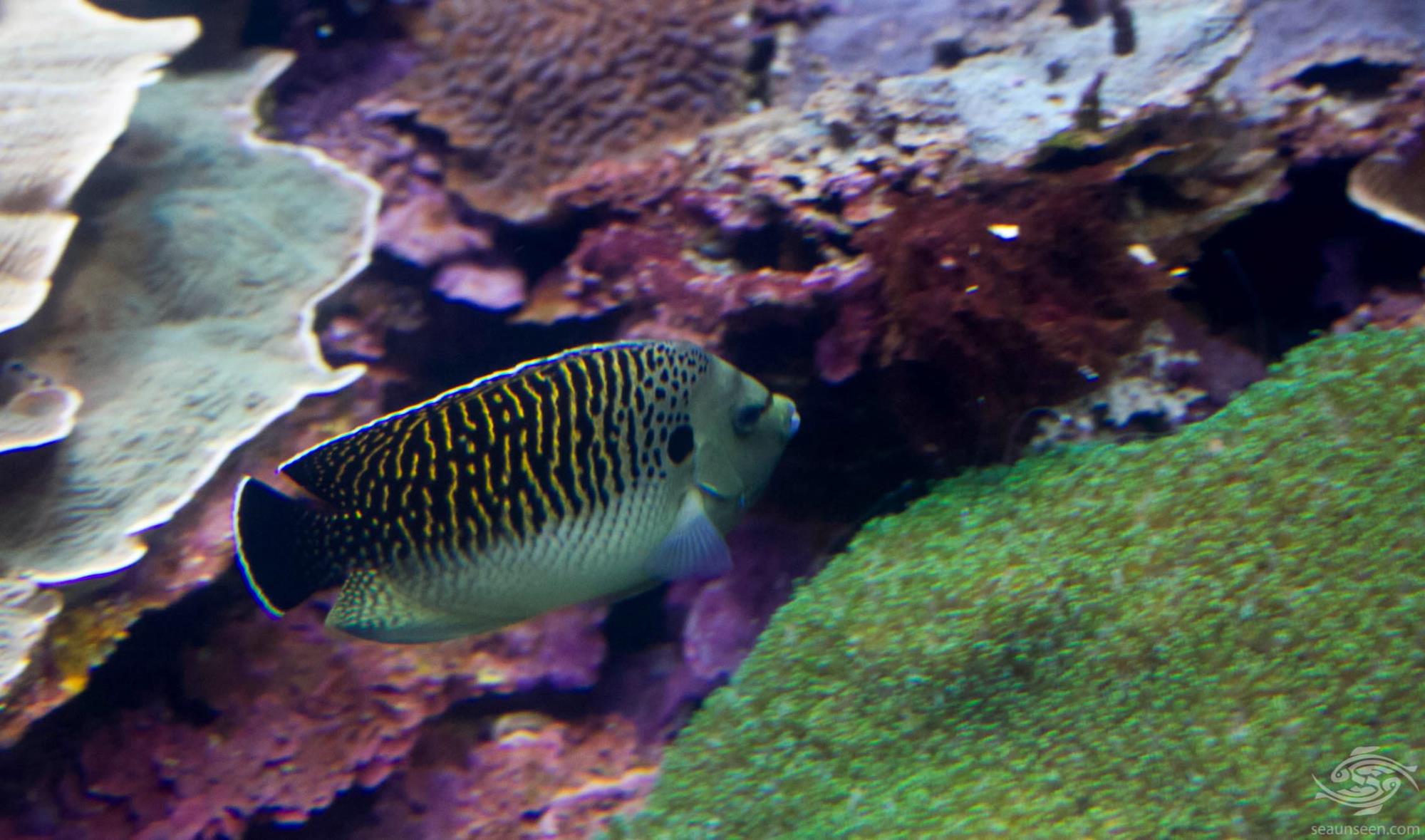 Because of the depths that these fish are found at little is known of their behavior. They are usually solitary and are found in areas with  lots of sponges. The juveniles are often seen at around 10 to 15 meters but the adults seem to prefer colder water and are found from 25 meters downwards. 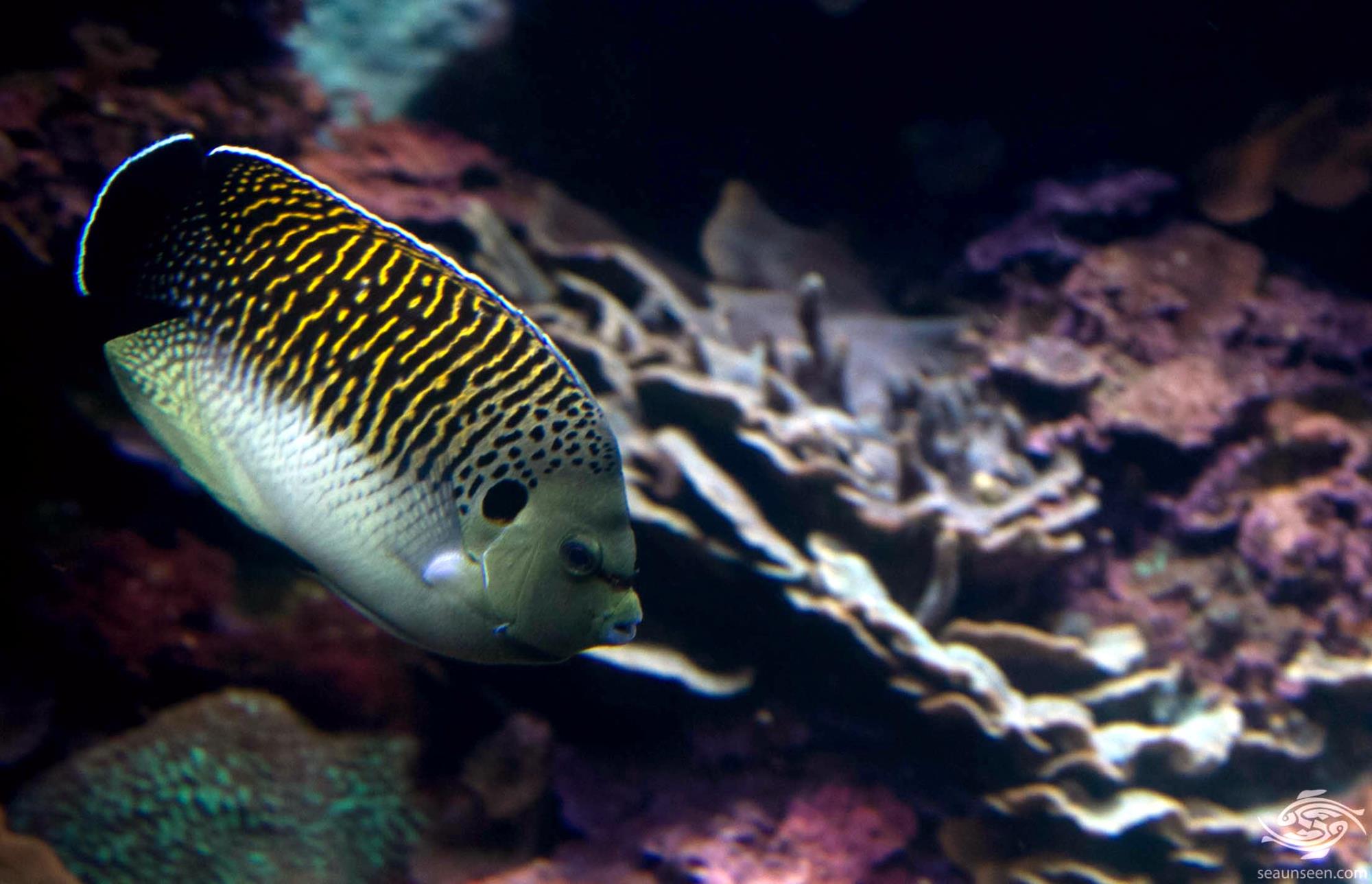 The Tiger Angelfish is usually found in areas with high concentrations of sponges and their natural diet is thought to be mainly sponges and tunicates.

Little is known of their reproductive behavior due to their rarity and the depths that they are found at. They are occasionally found in small haremic groups. 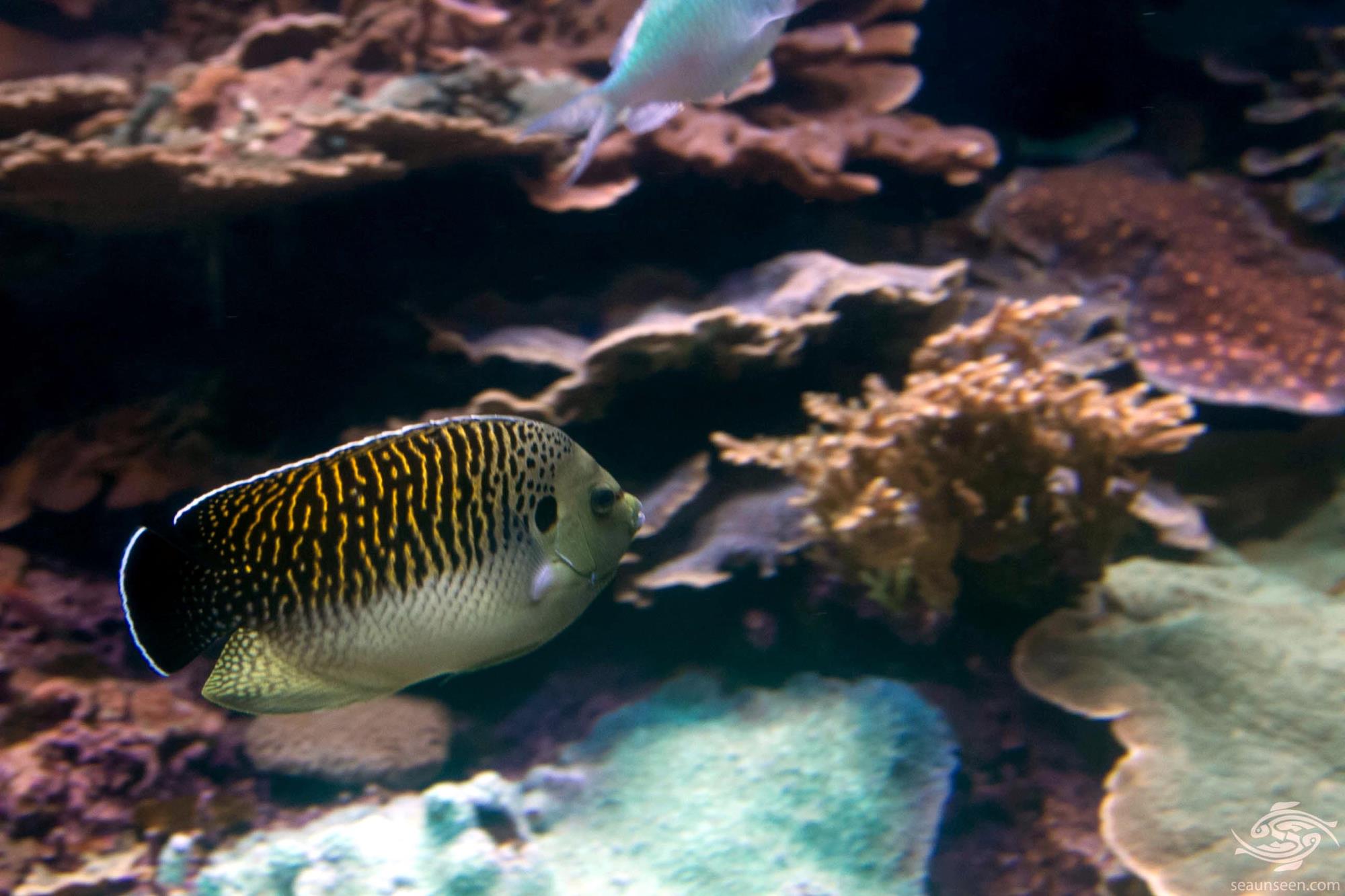 Tiger Angelfish are highly sought after by specialist aquarists and command hefty prices that few people can afford. They seem to enjoy cruising around a tank in a  pattern that changes after every few rotations. They will definitely be happier in a bigger tank and do not seem to be aggressive towards other reef fishes. Because of their solitary nature and given the price of these fishes, it is probably safer to only have one in a tank. They are not fussy eaters  and are easy to keep. Prices are high outside of South Africa and collectors have been reported to pay as much as USD 30000 for a healthy specimen. 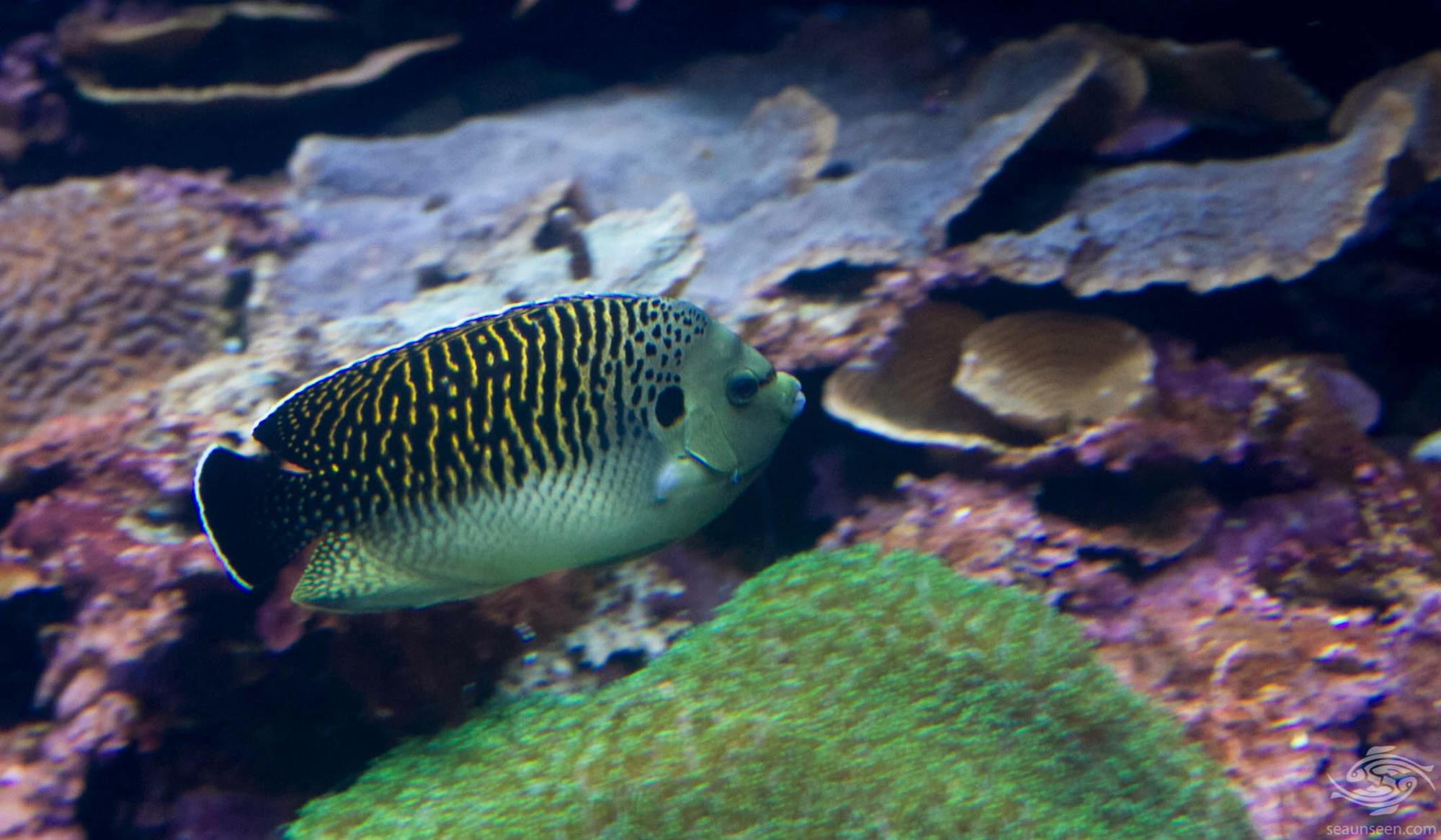