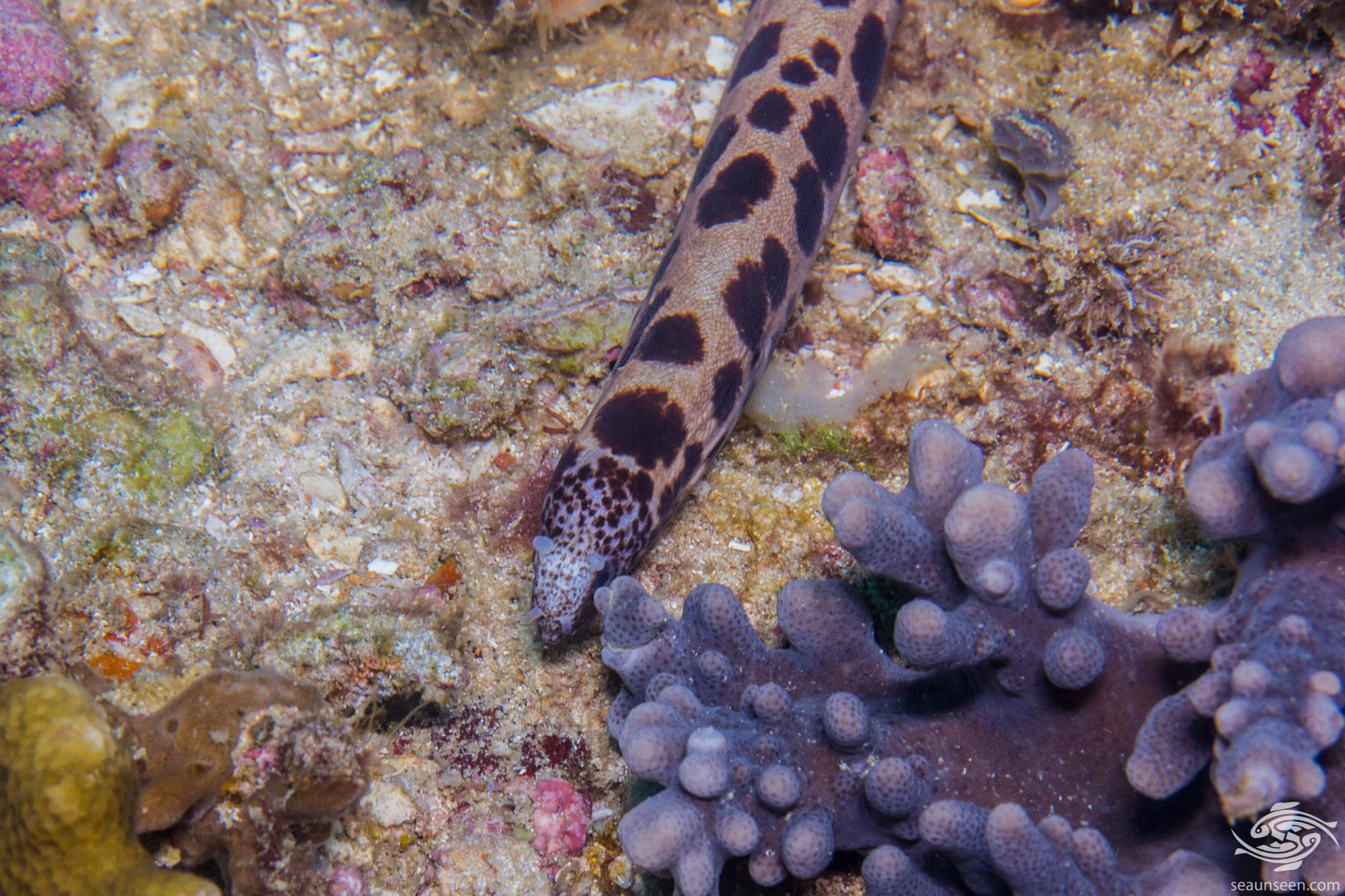 The Tiger Reef Eel (Scuticaria tigrina) is also known as the Tiger Snake Moray Eel and the Tiger Moray Eel . They are reclusive eels and are not commonly seen out in the open during the day. Usually one only sees a small part of their head sticking out of their hiding spot. 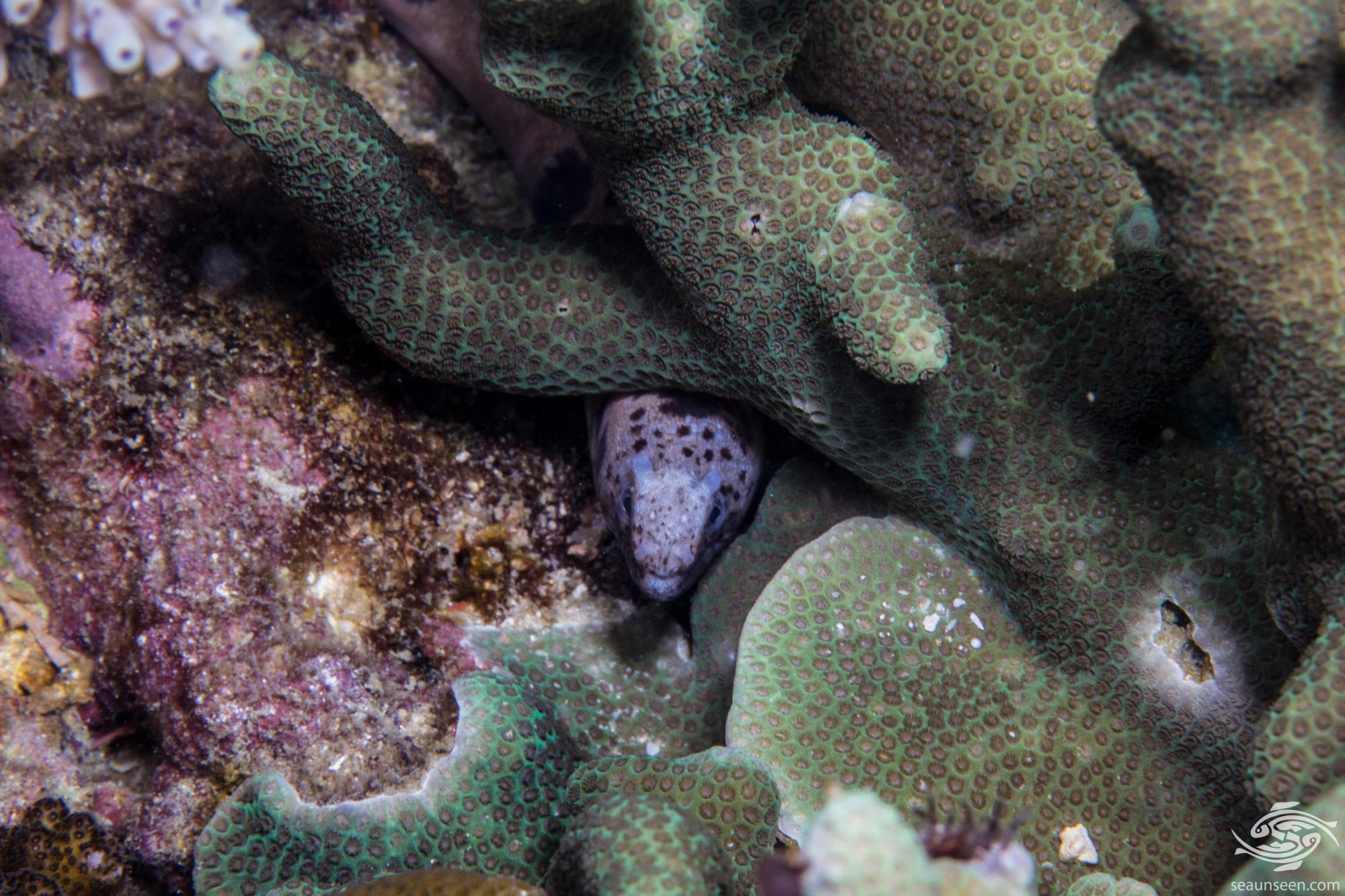 The Tiger Reef Eel grows up to 140 cm in length.  Its serpentine shaped body has a light yellow brown background color covered with a series of irregular dark brown blotches on the sides and top. The head is white and covered with smaller brown dots. Given that Tigers have stripes on them it is hard to understand how this eel was named tigrina. They dorsal fin is only visible towards the rear of the body.

The mouth is proportionally small for moray eels and has small teeth for grinding or crushing the hard shells of much of their prey. 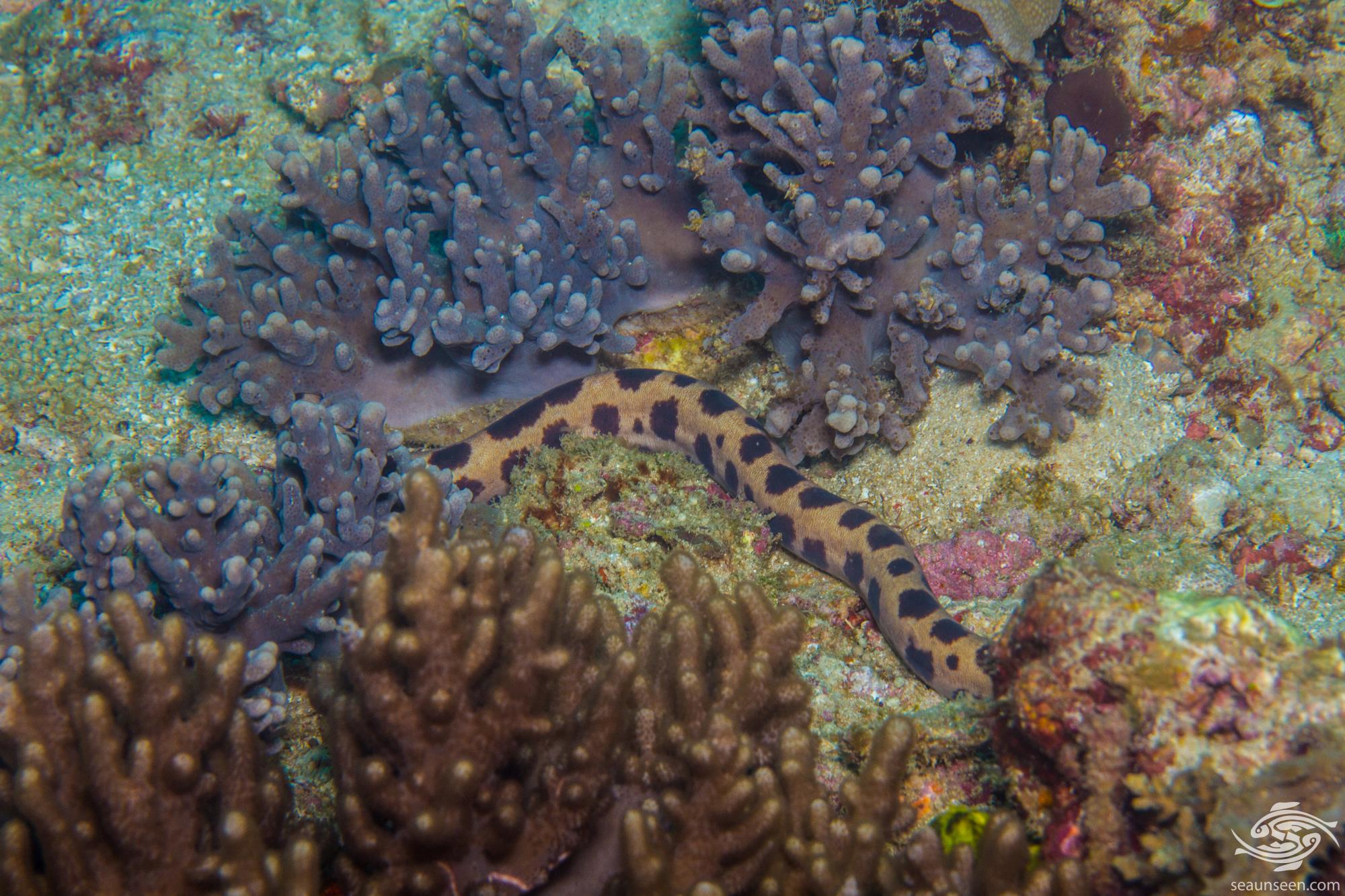 TIGER MORAY EEL IN THE WILD

Tiger Reef Eel are usually nocturnal feeders and spend the days in crevices in the rocks. Occasionally they will be seen with their heads sticking out the crevices during the day. Even at night they are highly reclusive and disappear into a crevice at the first sight of a light. It is rare to see them out in the open during the day as in the images in the post. 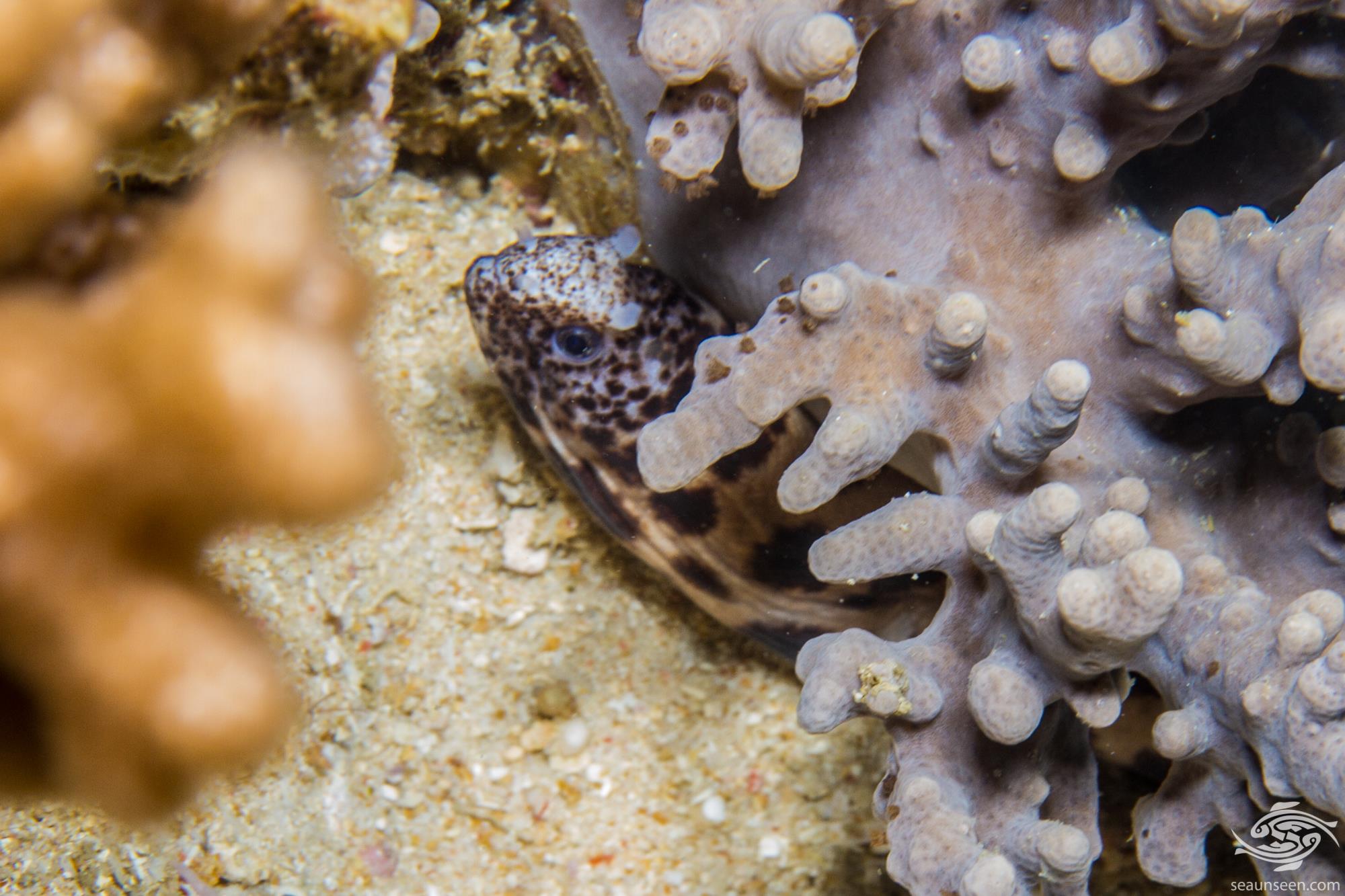 Much of the bite damage occurs when one pulls ones hand back after being bitten. Many experts state that one should not pull back, however they should go try it themselves. The bite is usually sudden and unexpected and it is natural to pull away from it.  I have personally seen one diver who lost the use of his thumb from a giant moray bite but that is unusual.

Some morays secrete mucus over their scaleless skin, which in some species contains toxins. Tiger Reef Eel have a thick skin and a large number of cells that secrete mucus epidermis.

The Tiger Reef Eel is widespread across the Indo-Pacific area, being found from the East Coast of  Africa , Red Sea included, across to the Hawaiian islands and Mexico. North to southern Japan and south to Australia.
They are found on sand , rocky reefs, coral reefs and occasionally in lagoons provided there is shelter. They are found from depths of 5 to 20 meters. 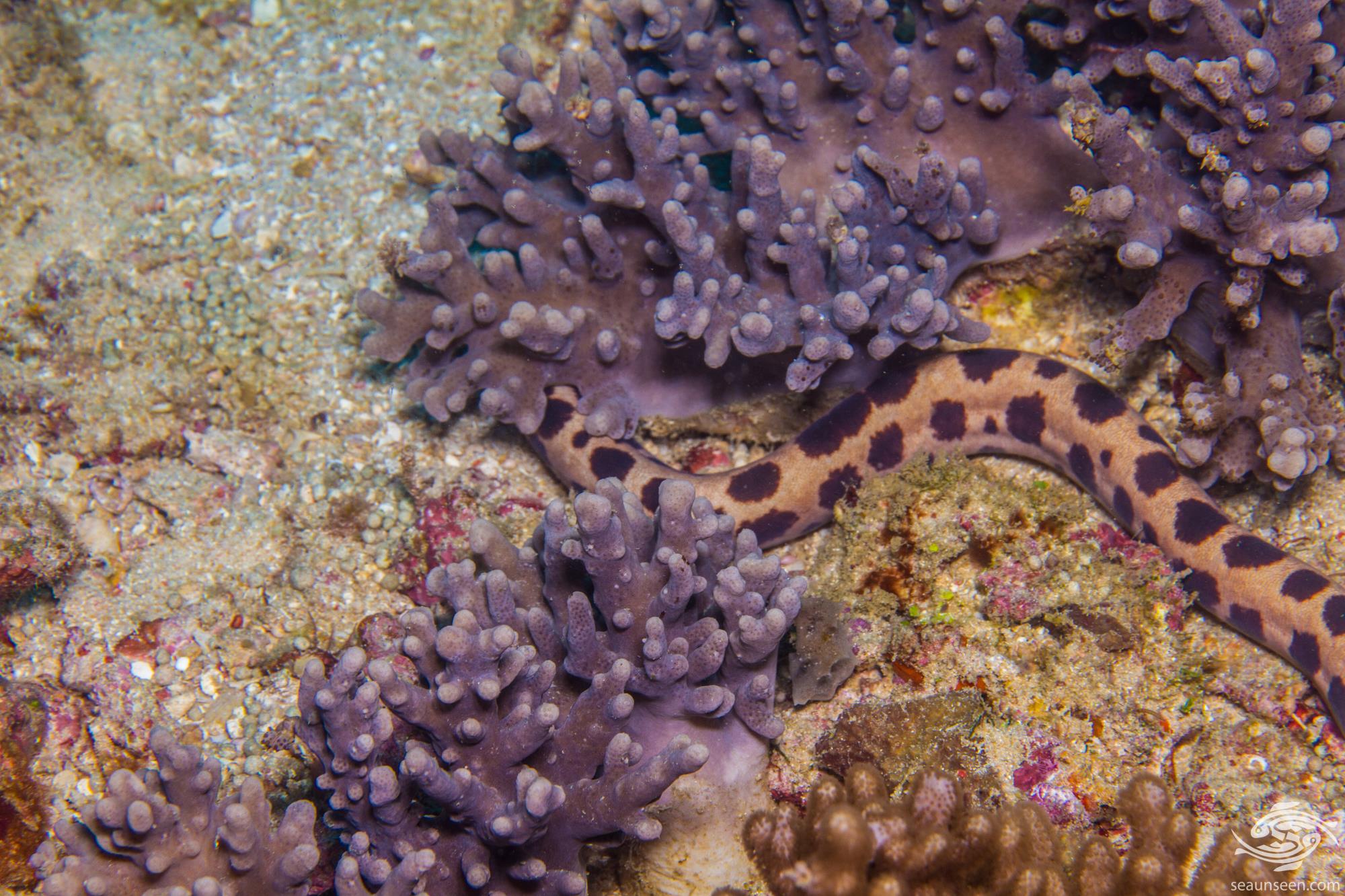 The Tiger Reef Eel is carnivorous, and does most of its hunting at night.  They feed mainly on small fish and crustaceans. Moray Eels have relatively poor eye sight but they have an excellent sense of smell that they use to detect their prey.

Moray eels have a second set of jaws in their throat called pharyngeal jaws, which also have teeth. When feeding, morays latch onto the prey with their outer jaws. They then push their pharyngeal jaws which are set back in the pharanx, forward into the mouth. They then grasp the prey and pull it into the throat and stomach. Moray eels are the only fish that use pharyngeal jaws to capture prey.

Their main hunting tool is their excellent sense of smell which makes up for their poor eyesight. This means that weakened or dead creatures are the moray eel’s favoured food.

Studies have shown hermaphroditism in morays, some being sequential and others  synchronous which can reproduce with either sex. Courtship usually occurs when water temperatures are high. After posturing to each other they wrap their bodies around each other and simultaneously release sperm and eggs. Once Tiger Reef Eel hatch the larvae float in the ocean for around 8 months before becoming elvers and eventually a moray eel. 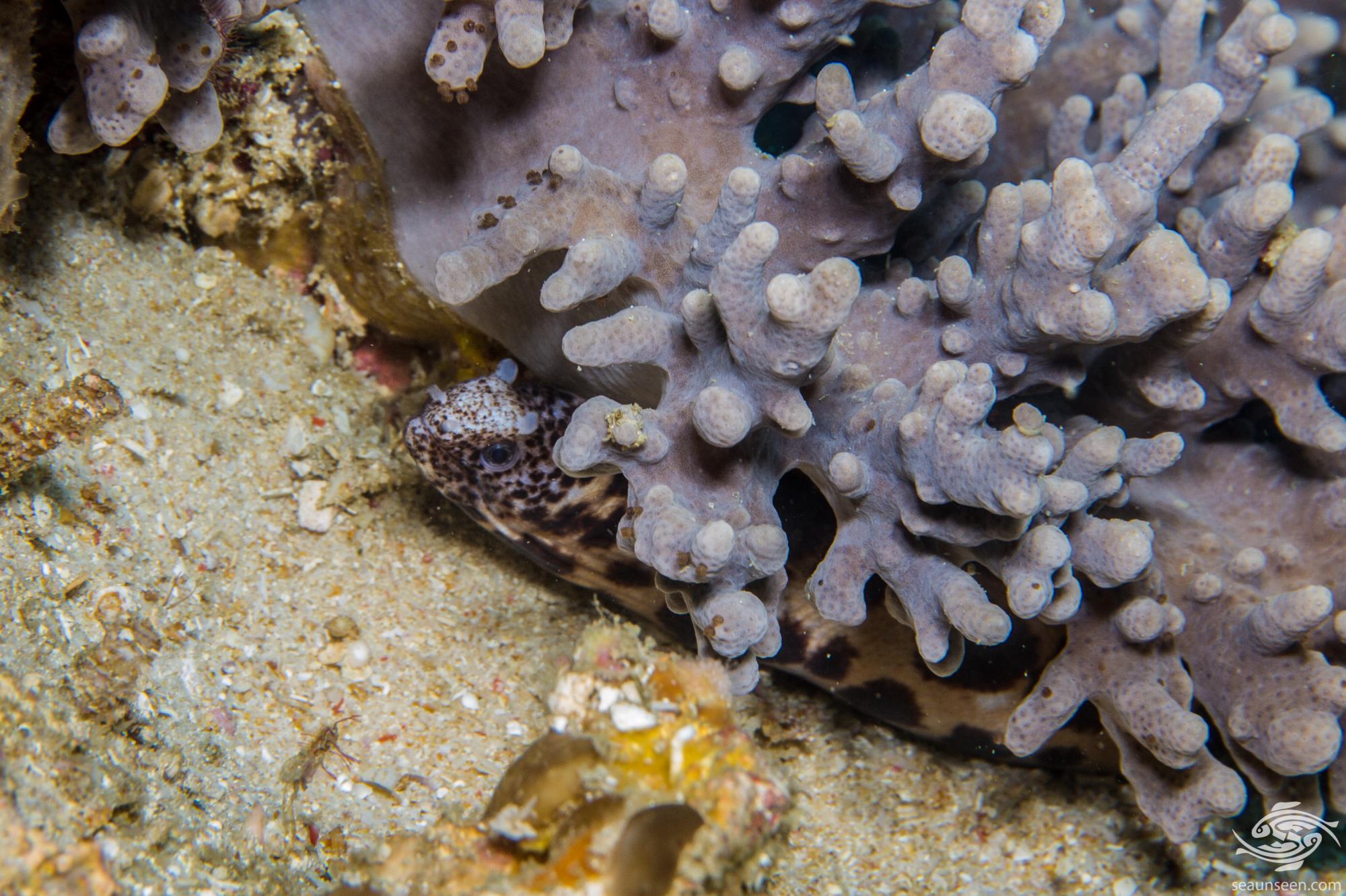 Tiger Reef Eel, being unusual looking, relatively small and more peaceful than the other larger species of Moray Eel are a favorite with some aquarists. They will eat smaller crustaceans such as shrimp and crabs and are messy eaters so require a good filtration system.

Being carnivores they may also take smaller fish but are relatively easy to wean onto a frozen diet. Being eels they will certainly try and leave their tank and the top should be very well secured to prevent this. Many aquarists have come home to find their prized specimen dried out on the floor and it is best to avoid this.
SEE OUR OTHER POSTS ON MORAY EELS HERE