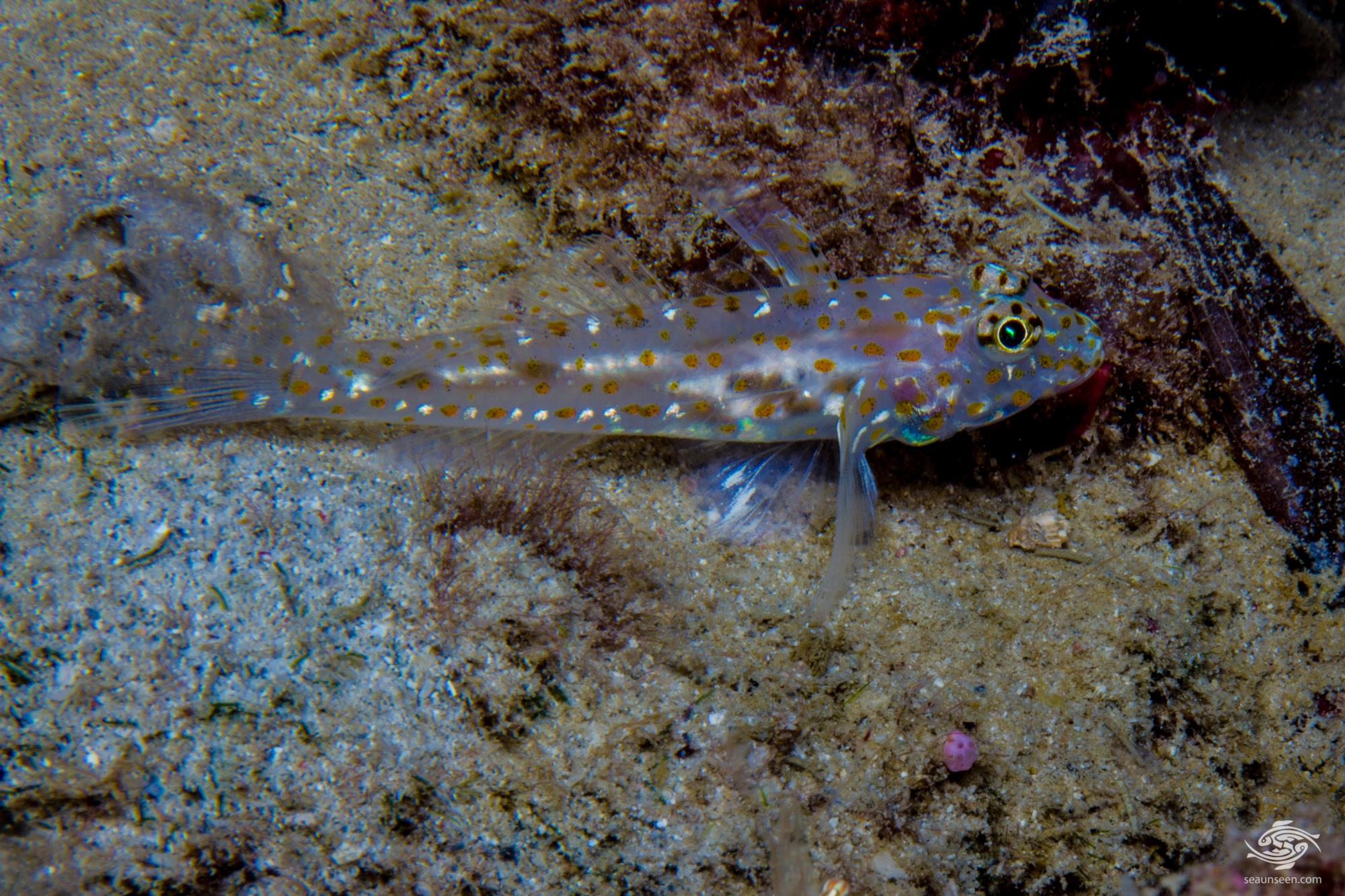 The Transparent Cave Goby (Fusigobius pallidus) is also known as the Pale Sand Goby. They were initially described as Coryphopterus pallidus but were reclassified by Randall in 2001 as Fusigobius pallidus. One of the paratypes for the species was from Mafia Island which is where these specimens were photographed.

We have seen them further south of Mafia Island near Fanjove Island but to date not on the Tanzanian mainland coast. They obtain their name pallidus from the pale coloration of the preserved samples when researchers first collected them. Their common name is derived from their transparency and habit of hiding on the floor of small caves and they are usually either found under an overhang or in a small cave.

As with other gobies they lack swim bladders which given that they spend most of their time on the substrate are not needed and although they do not have a lateral line, they have sensory organs around the head.

The Transparent Cave Goby Goby has a typical tapered cylindrical goby shaped body although it is somewhat proportionally shortened  compared to some other gobies. The body and fins are translucent and there are a series of orange and brown speckles spread across the body and on the dorsal and caudal fins. The internal organs are visible through the flesh. The first dorsal spine has a single spot on it. The eyes are ringed by a series of outwards radiating brown lines with an inner yellow ring. They grow up to 6 cm in length. 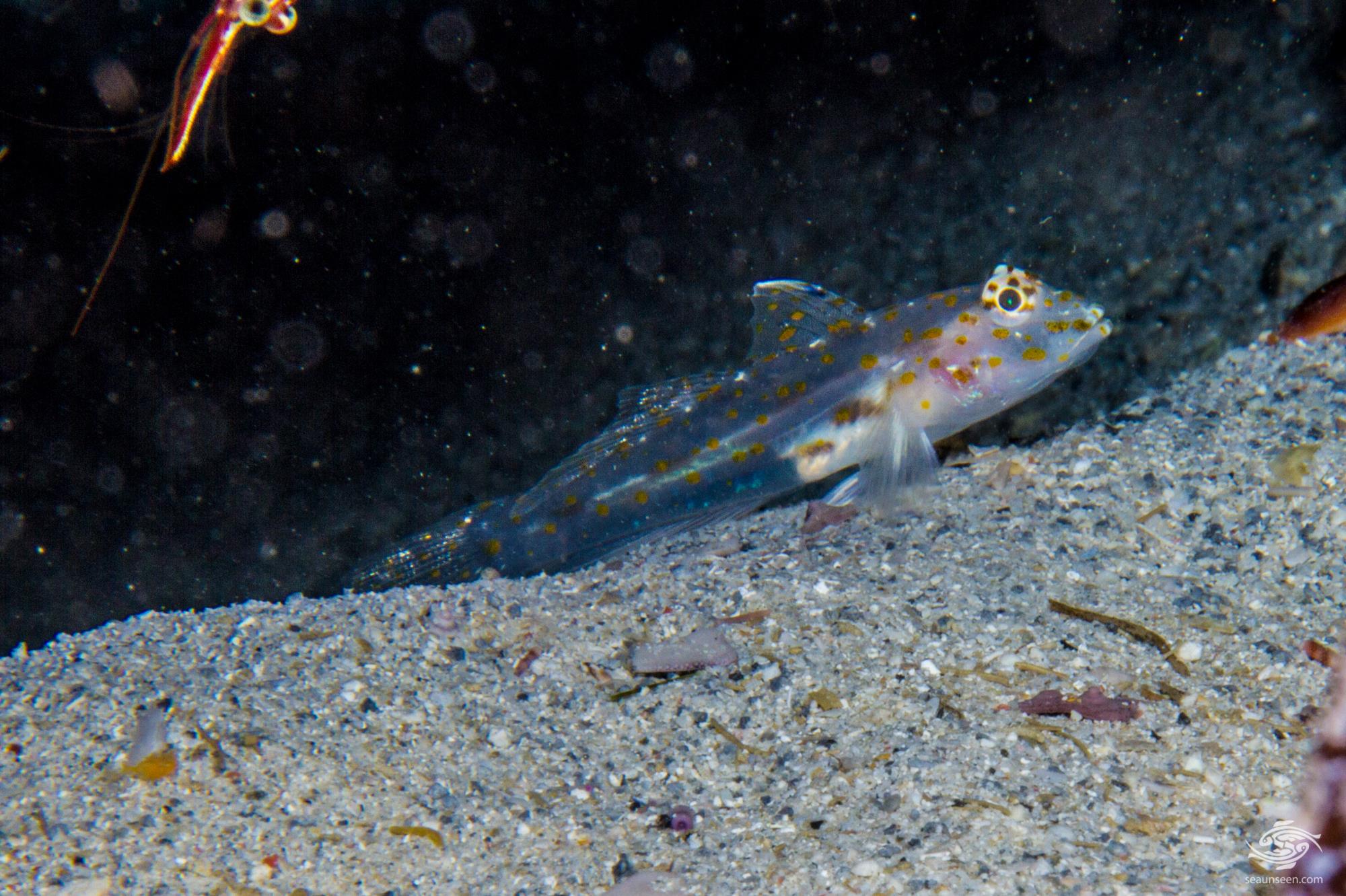 TRANSPARENT CAVE GOBY IN THE WILD

The Transparent Cave Goby is fairly common in some areas. They are usually seen sitting on the sand in areas where the reef and sand meet. Typically they will sit under an overhang or in a small cave and if one approaches they will initially sit dead still but if one approaches too closely they retreat further under the shelter of the reef in short hops.  There will usually be several specimens in an area but they tend to keep a distance between each other. Rarely will one see two close together and they are usually at least some 20 to 30 cm apart. 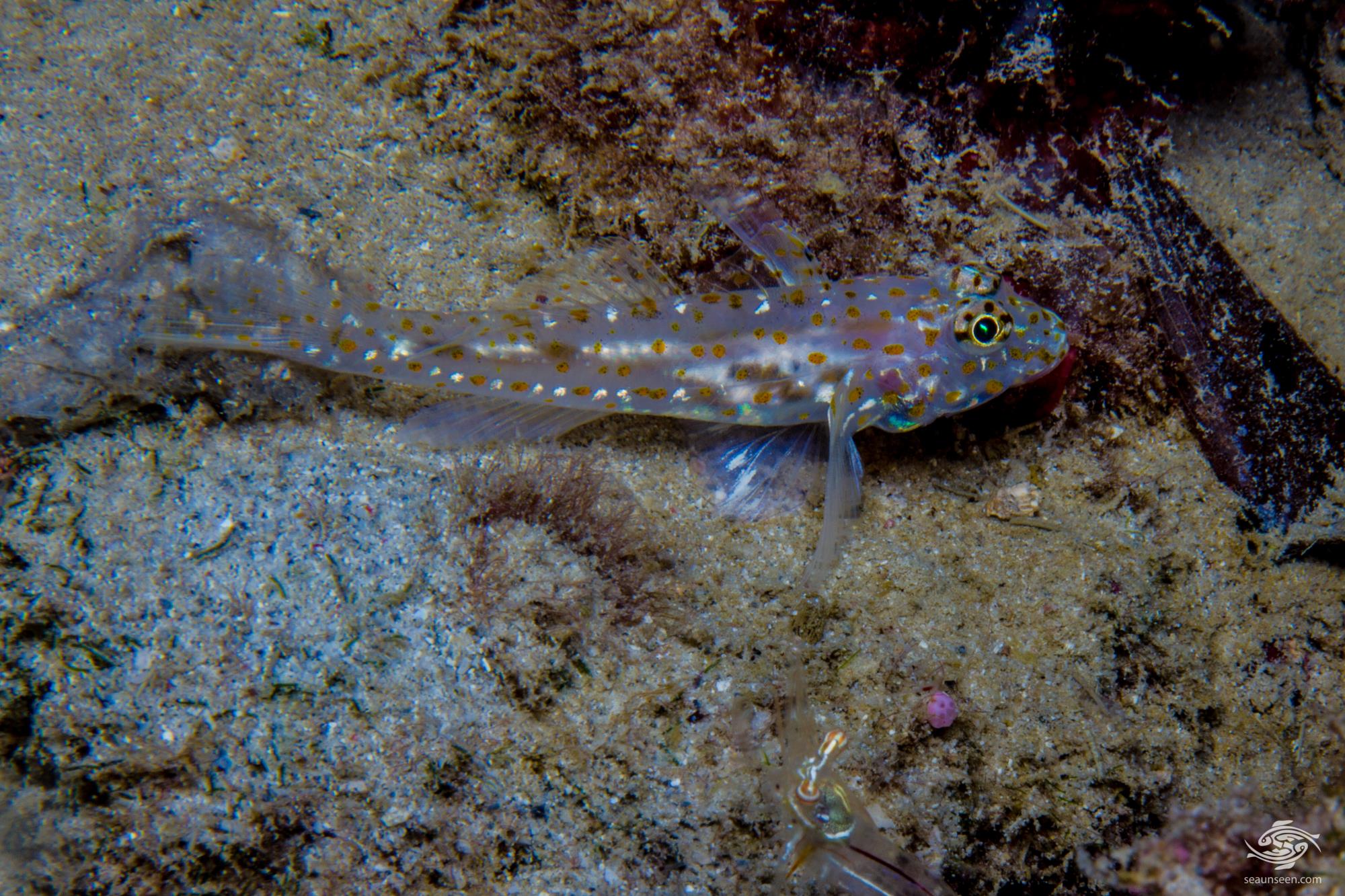 The Transparent Cave Goby is found across the Indo west Pacific area from East Africa to the Philippines. They are mainly seen on sandy areas in small caves or under overhangs. They are more common from 15 downwards and we have seen them down to 22 meters. They are however reported to 48 meters. 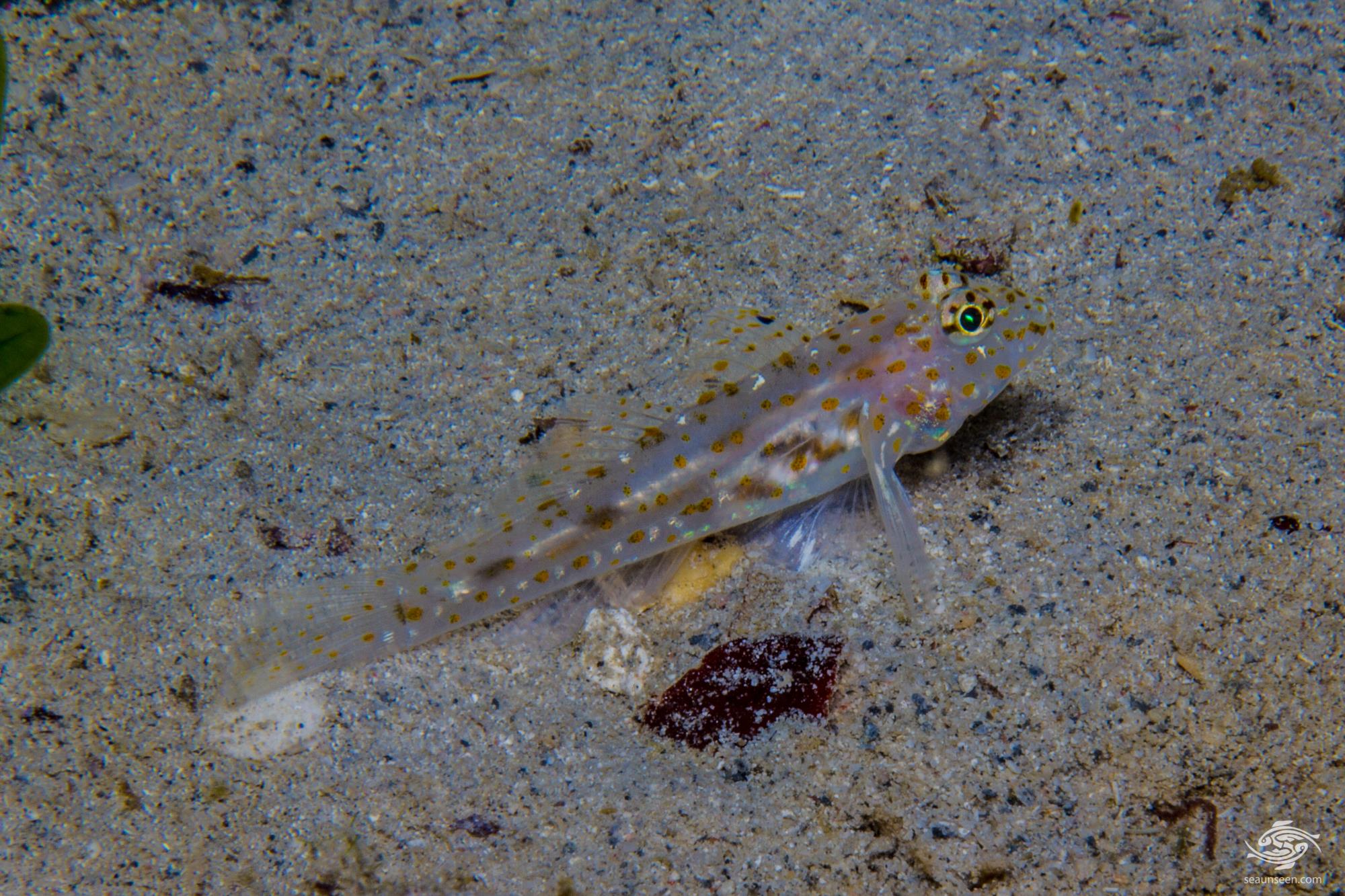 From personal observation only , they seem to sit on the sand and make jumps onto the sand to capture prey, presumed to be small microorganisms that live in the sand. These are probably copepods, ostracodes, amphipods, nematodes or foraminiferans. 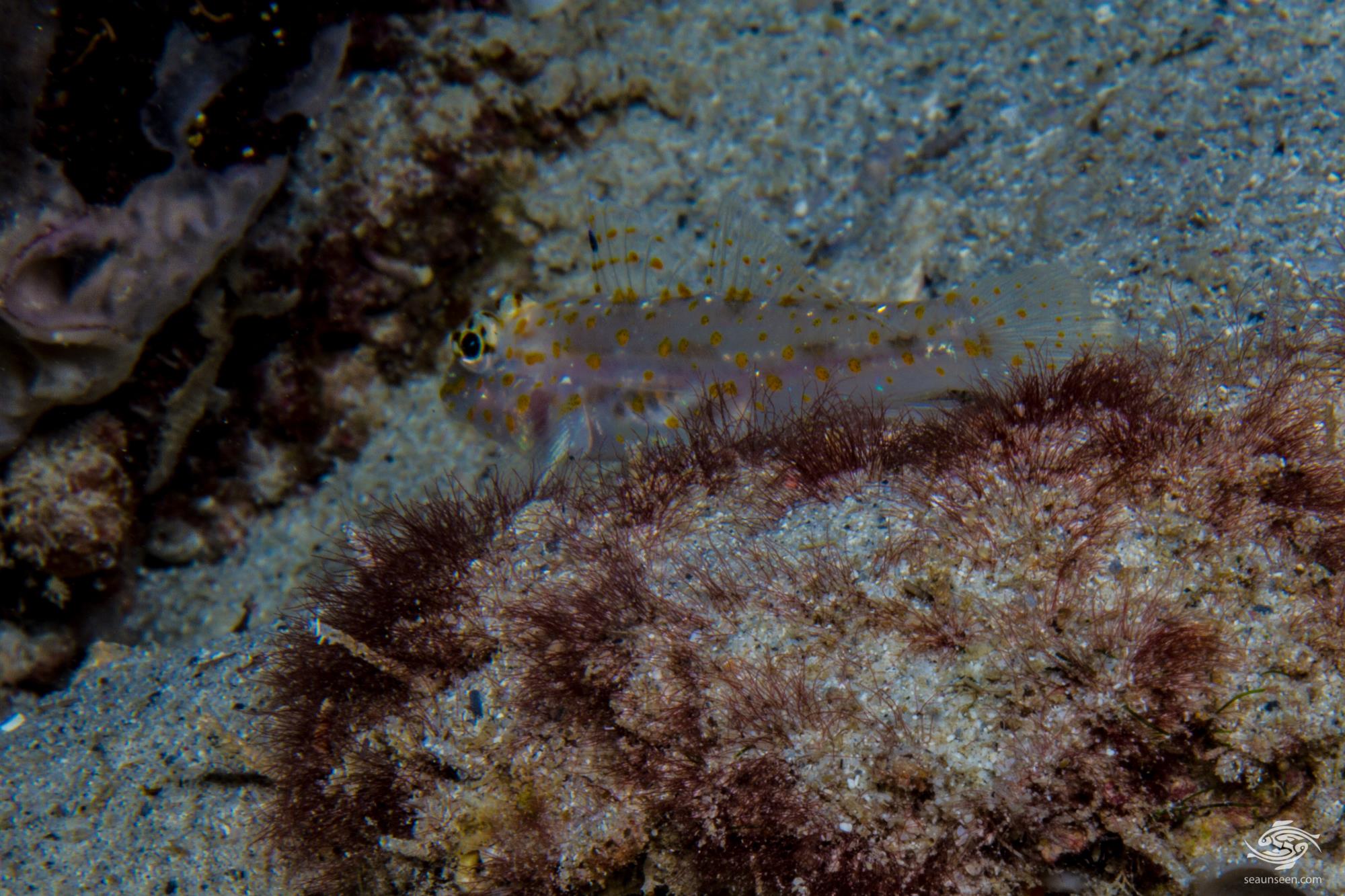 Little seems known of their breeding habits although they are now being bred by Ora Farms in the United States. This is good news and relives pressure on wild populations.

From observing them in the wild they would probably slot into an aquarium very well. They seem to be territorial and although groups are found in the same spot under overhangs they seem to keep their distance from each other. The company Ora who captive breed this species estimate that each specimen has a territory of roughly one square foot which bears out with observations in the wild.