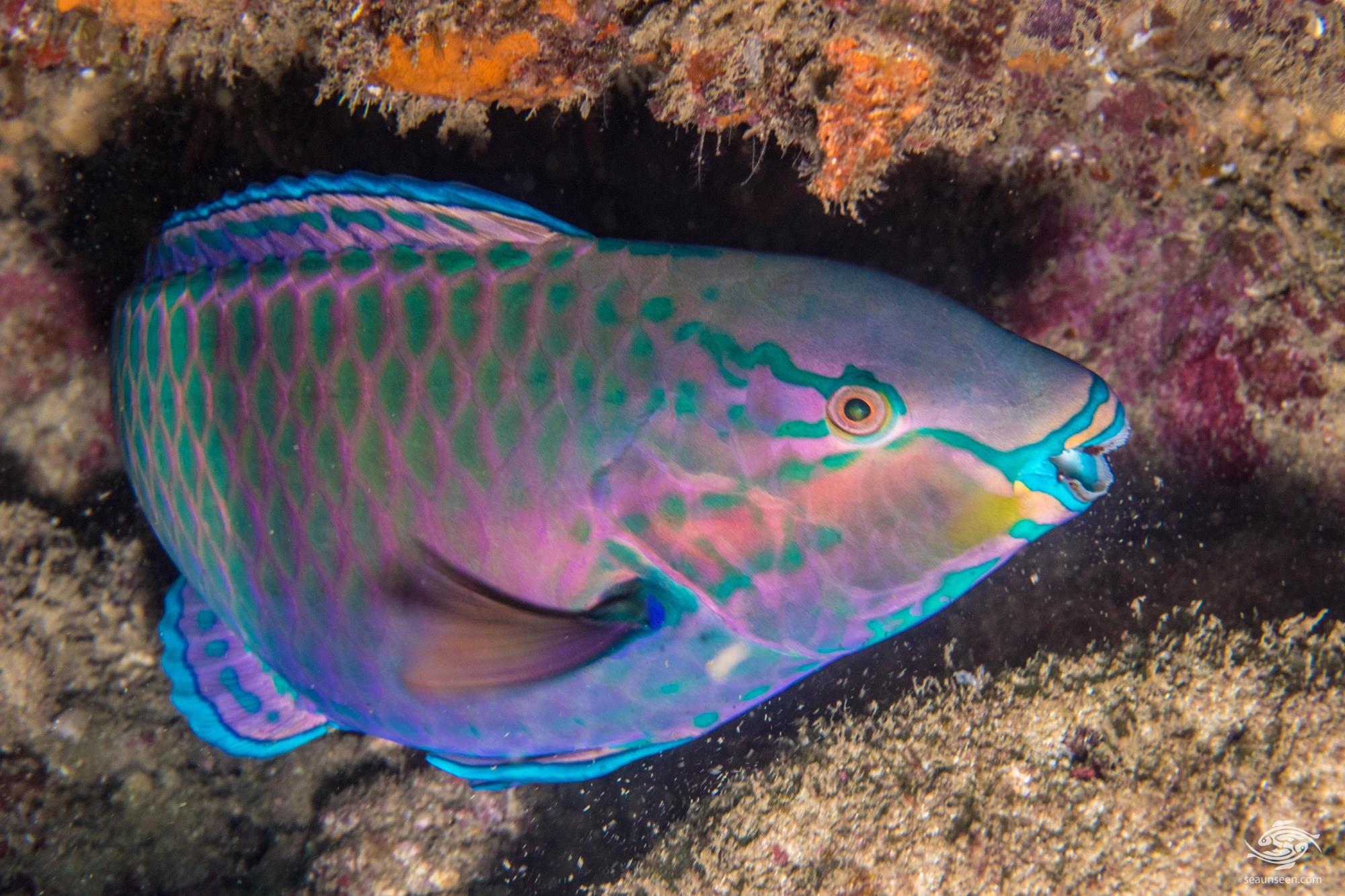 Within the various species of  Parrotfish which are part of the Labridae family, there is considerable divergence in looks between the juveniles and the adults. Additionally there are regional variations  in looks which combined with their ability to change their colors which is particularly striking at night, creates a large amount of confusion as to which species is which.

To put the situation into better perspective, Tricolor Parrotfish are sequential hermaphrodites. At birth both males and females are present and these are referred to as primary males and females.  The coloration varies between the primary males and females and these are less colorful and are sometimes difficult to tell apart. Then there are the secondary males,  born female who change their sex when prompted by social cues such as the absence of another secondary male. These secondary males are often referred to as supermales because of the potential brightness of their colors.  During breeding season these males are able to intensify their colors. As one can see in the images below, these colors appear most intense at night.

Most species of Tricolor Parrotfish have been described on multiple occasions in various areas, with this species  having been described at least six times by different scientists in different parts of the world.  It can often be exceedingly difficult to determine which species a specimen is depending on the age of the fish. All the specimens in this post were photographed in Tanzanian waters and the same species may vary in appearance elsewhere. 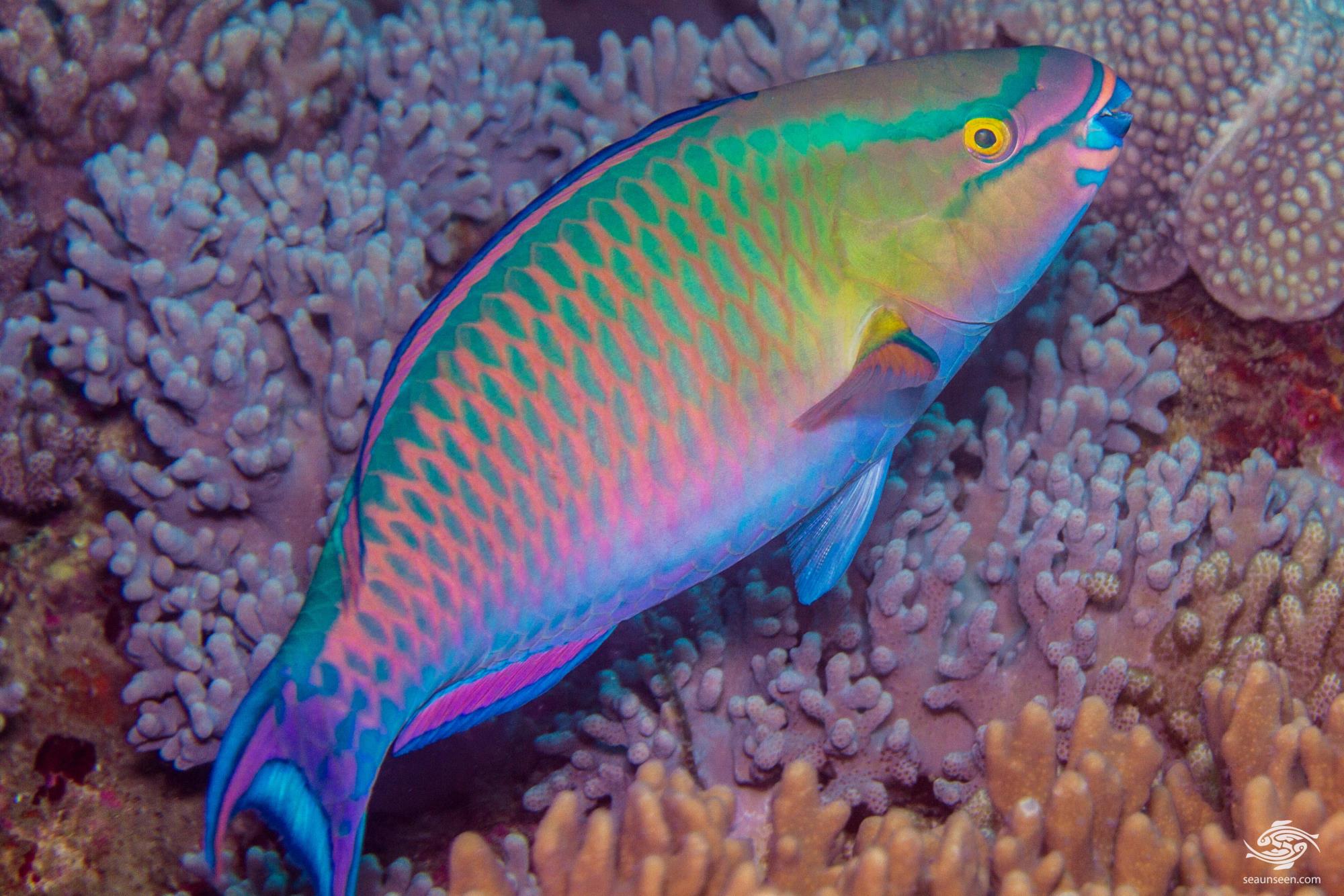 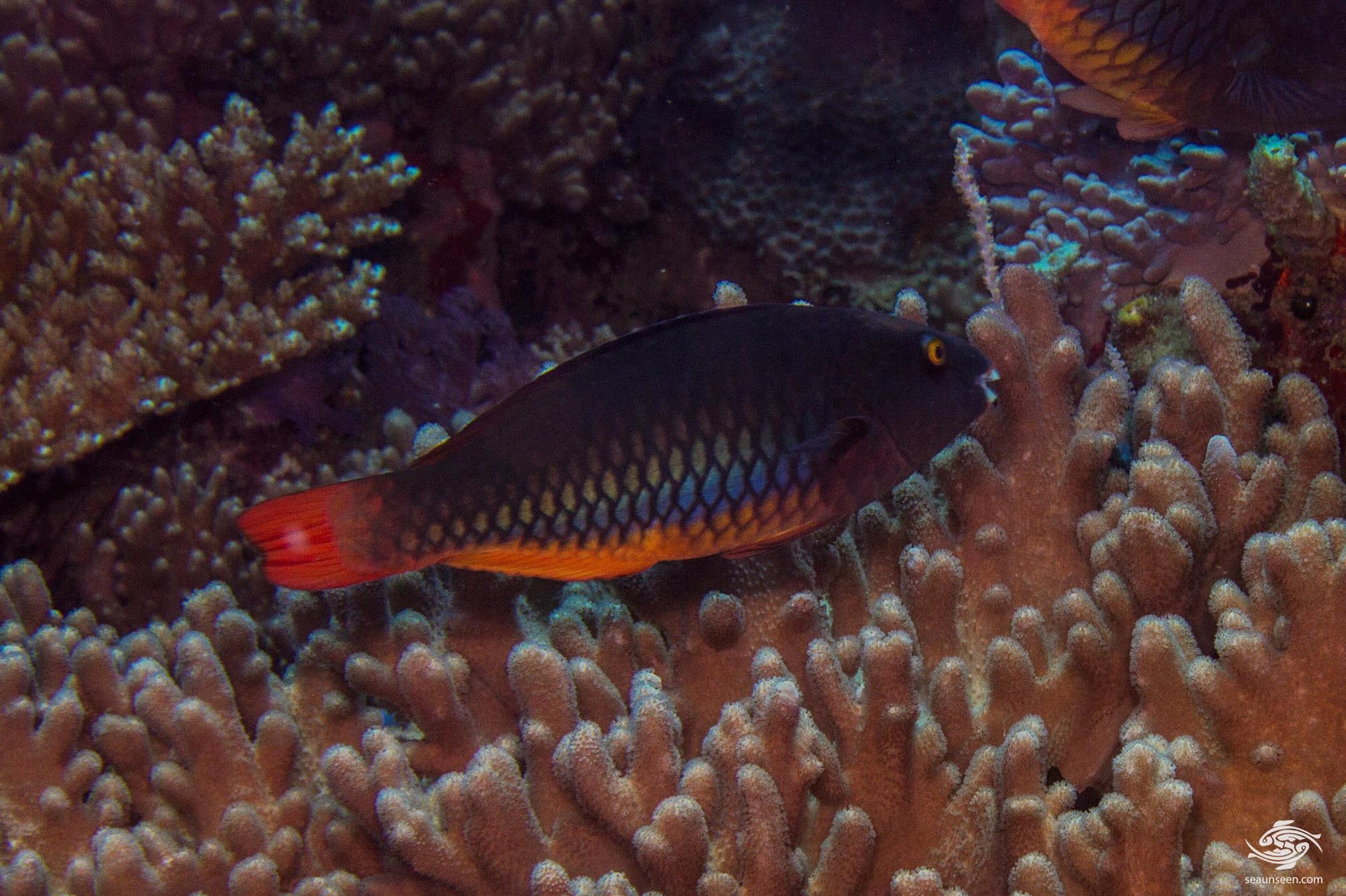 As they mature pictured below, so they develop a pale spot on the on the forehead.  This may be a precursor to changing  into a terminal phase male. 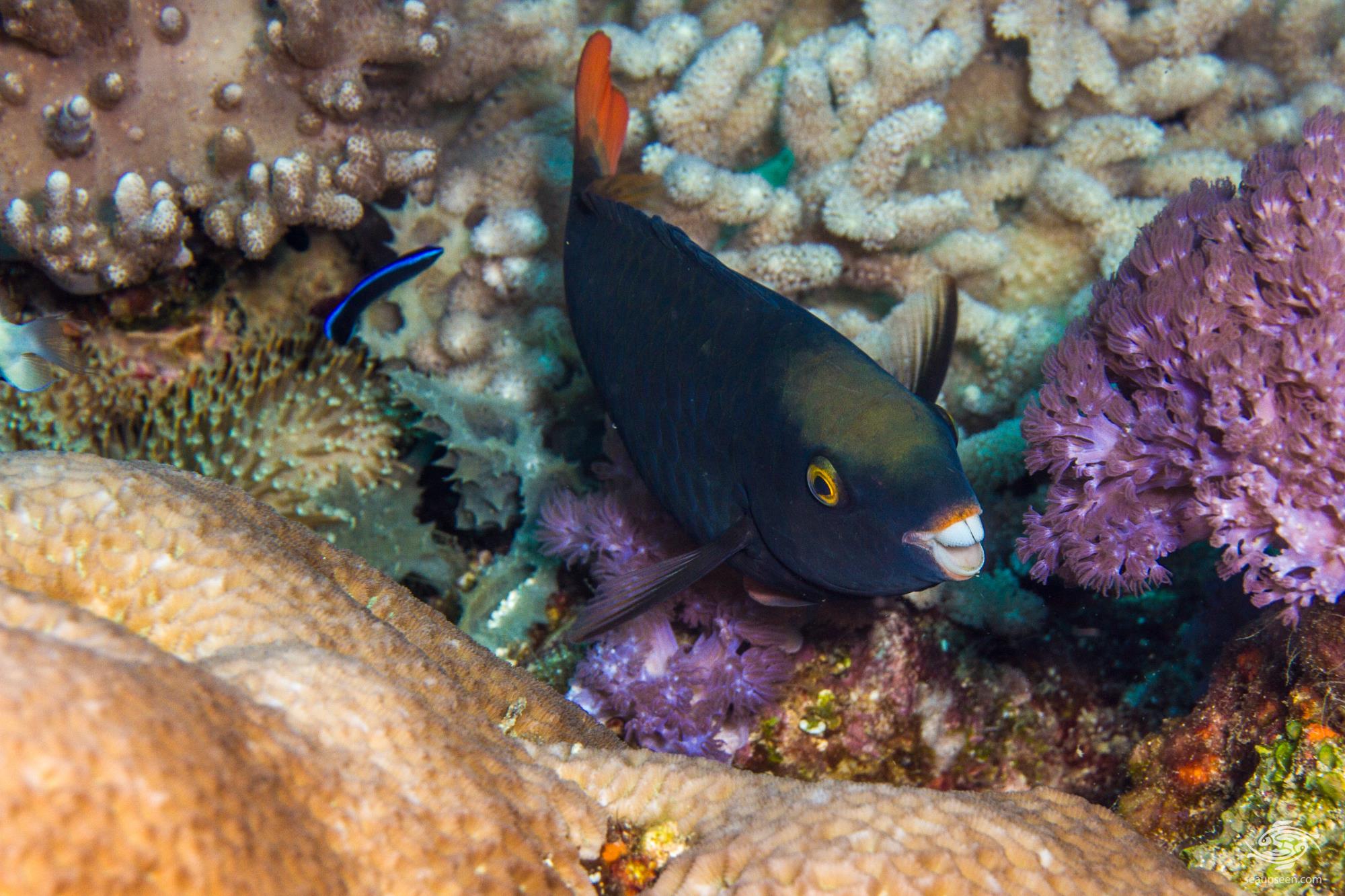 With males as pictured below, from the side view which is the normal view one has , the easiest identifying features are the lines around the face and mouth.  The teeth are usually blue, above the mouth there is a blue or green line which runs just above the mouth back under the eye.  Below this is a moustache shaped orange or pink line. Below the mouth there is a blue line circling the lower mouth, then a pinky or orange line followed by a short blue line.

Above the eye of Tricolor Parrotfish there is a green line that runs around the front of the forehead which fades as it goes back towards the dorsal area. This line is not always that distinct.  The Tricolor Parrotfish body is however much more variable in color but is predominantly green/ blue with pink edged scales. The caudal fin has a distinct purple or pink line along the inside of the light blue upper and lower rays which sometimes seems to join up. 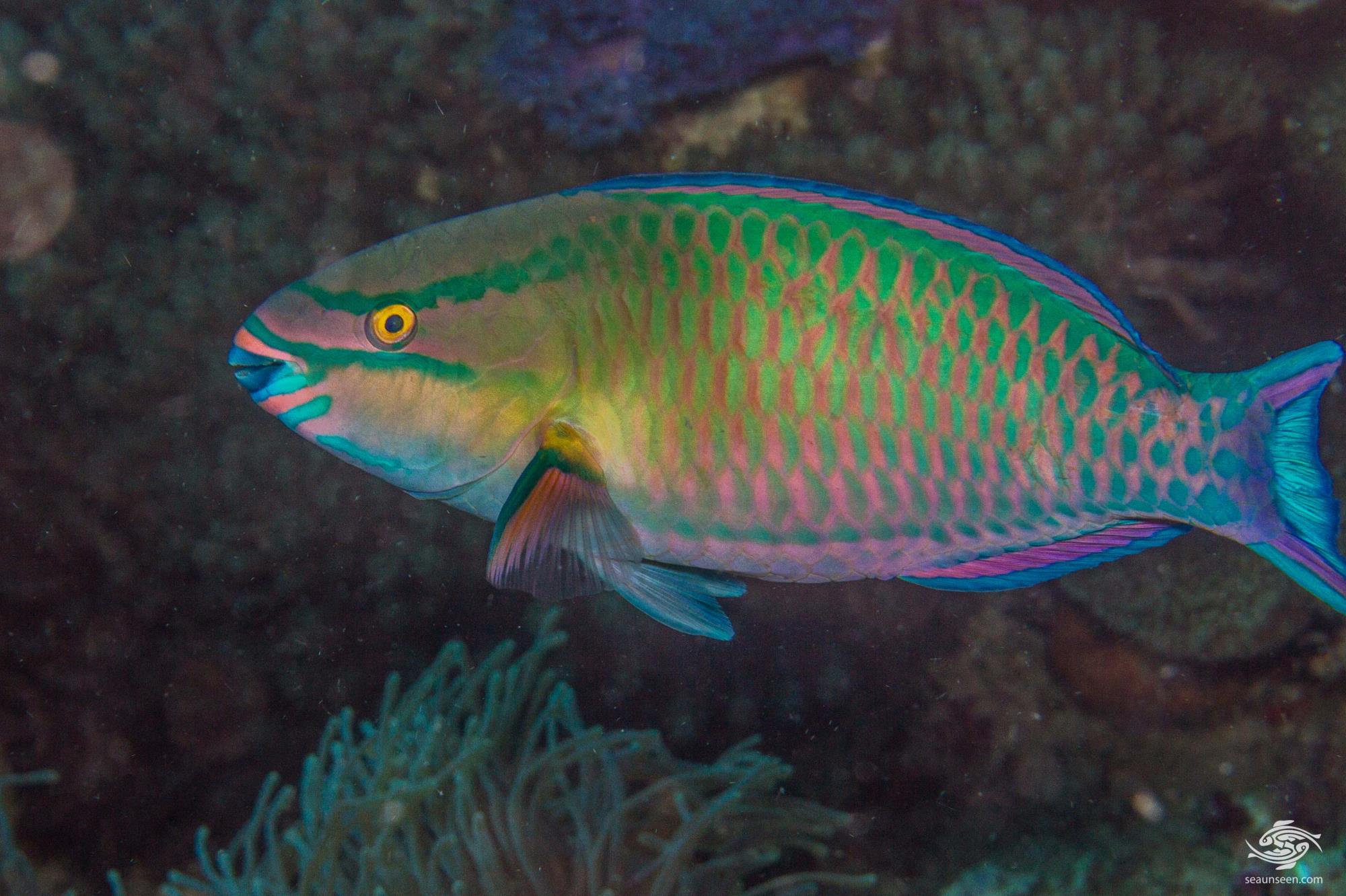 The pattern of lines around the Tricolor Parrotfish mouth can be seen in a frontal view below and there is actually what closely resembles an orange moustache above the mouth , ringed in blue with a further blue line running around below the mouth. The strobes have whitened the teeth from the normal blue. Note the teeth protruding from the sides of the upper jaw. These are probably used in threat displays when the larger males compete for females and would certainly be capable of inflicting damage. 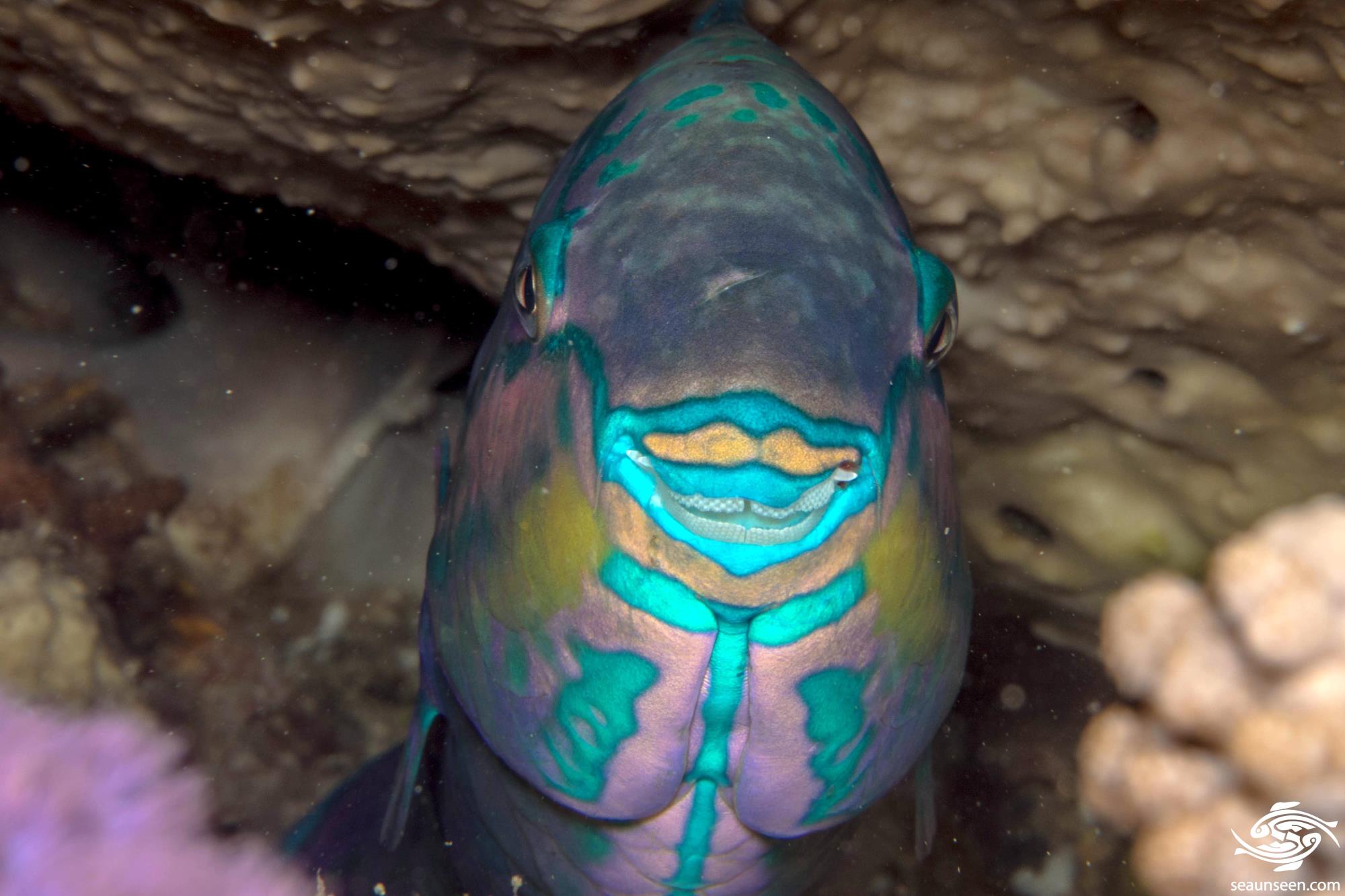 To give one an indication of this fishes ability to vary the color of its body and the patterns on it, below are images of four different specimens taken at night. The coloration below one often sees during the day with the pink becoming more predominant on the mid rear body.  A distinct lightening can be seen on the rear of the body with wide purple bar appearing mid body. 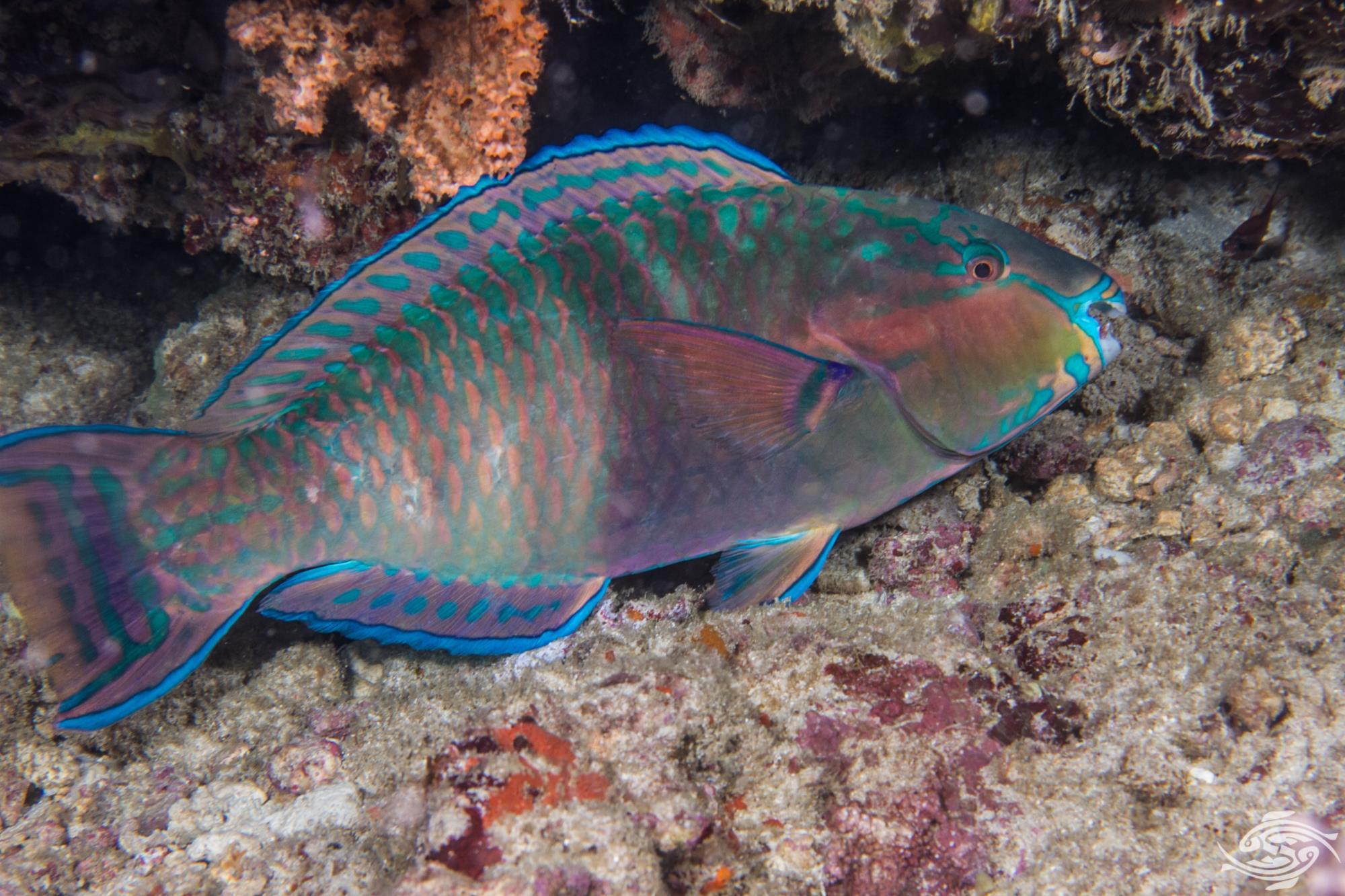 The two specimens below have modified their colors further and sometimes one sees the short pink lines on the rear of the body during the day. This pattern seems to be the most common coloration at night. 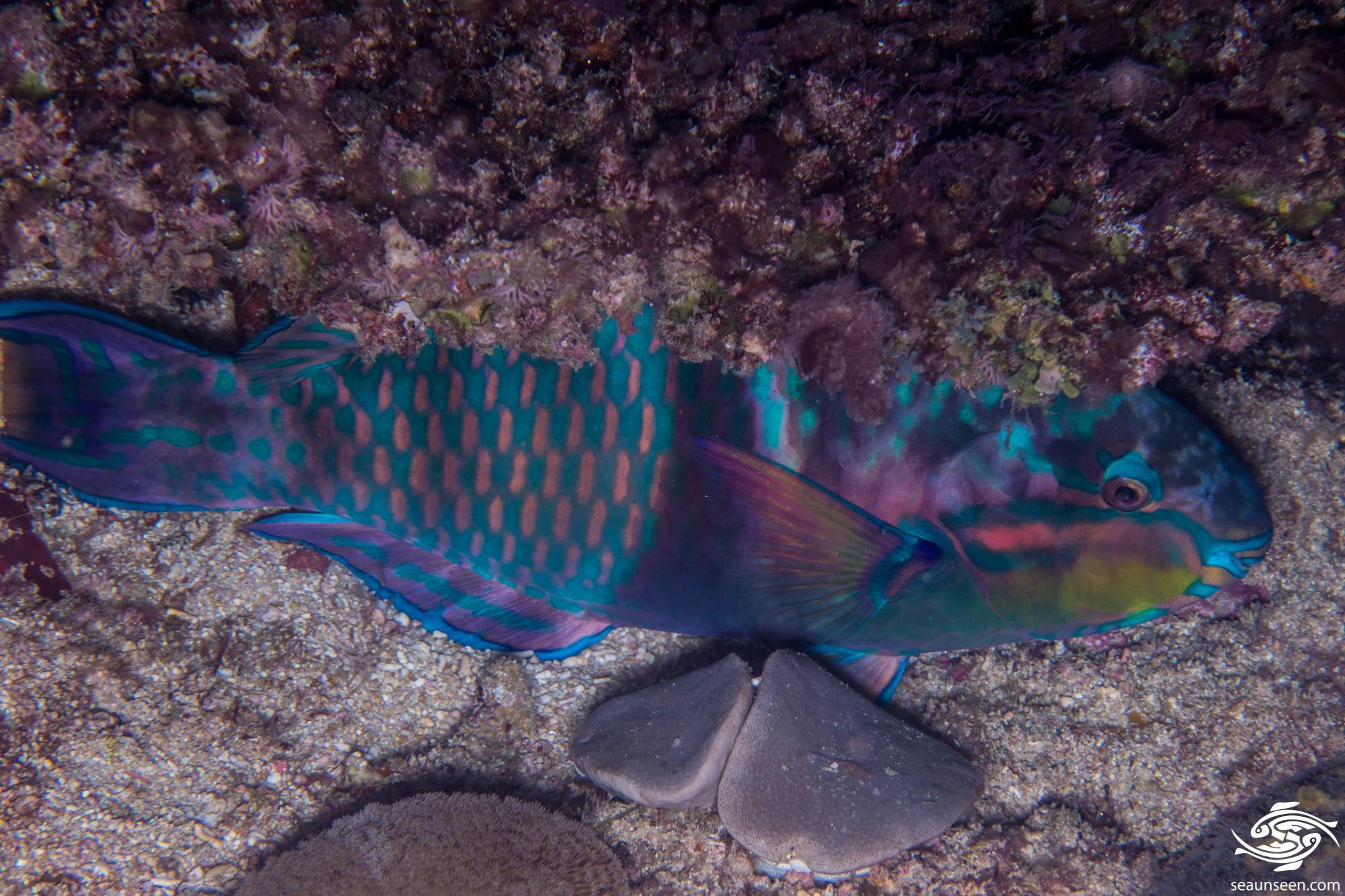 All in all though this fish has impressive color changing abilities and the lines on the face are perhaps the easiest way to identify them. 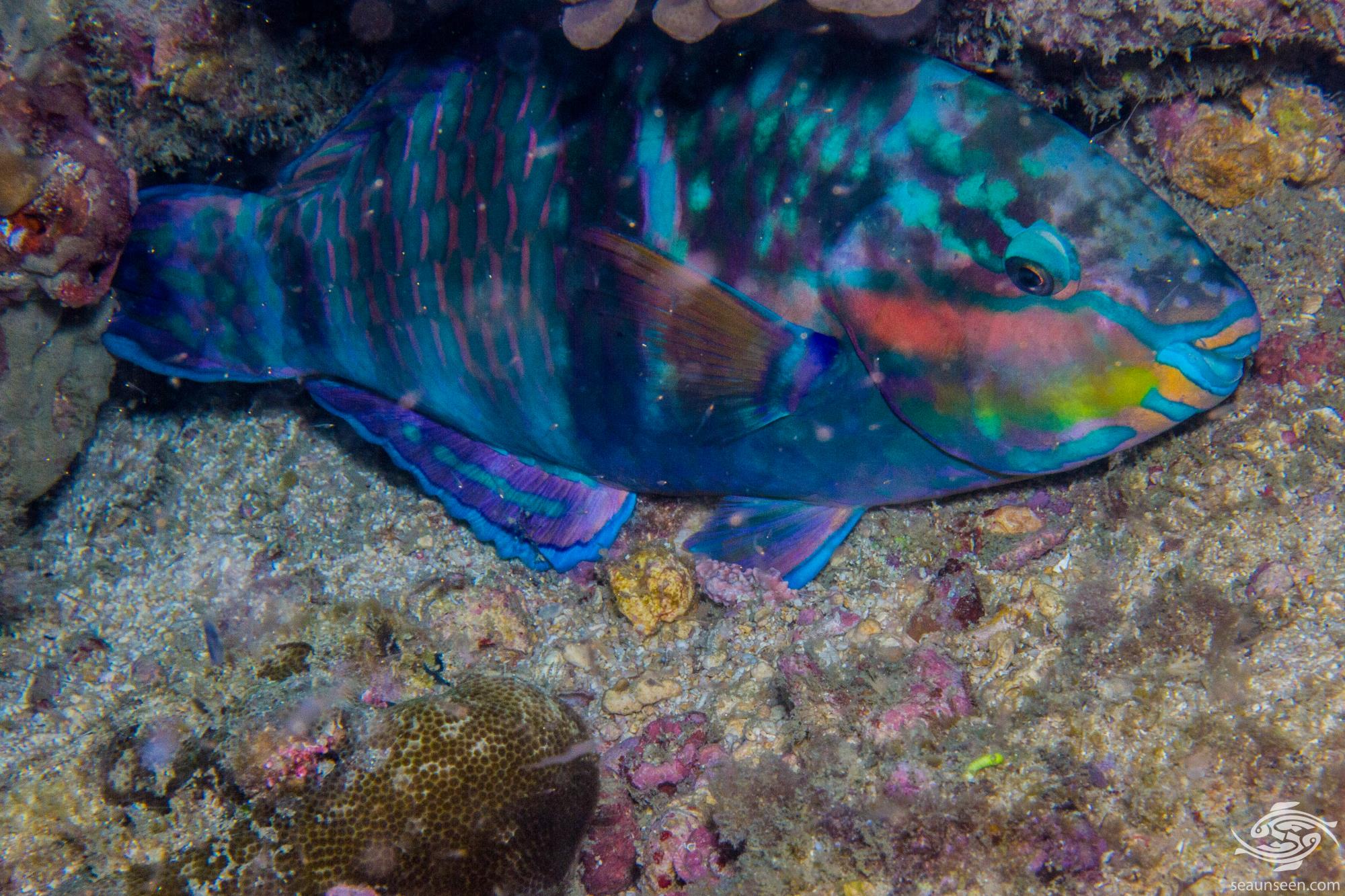 The image below is a specimen photographed at night during the mating season and the colors are particularly vivid. 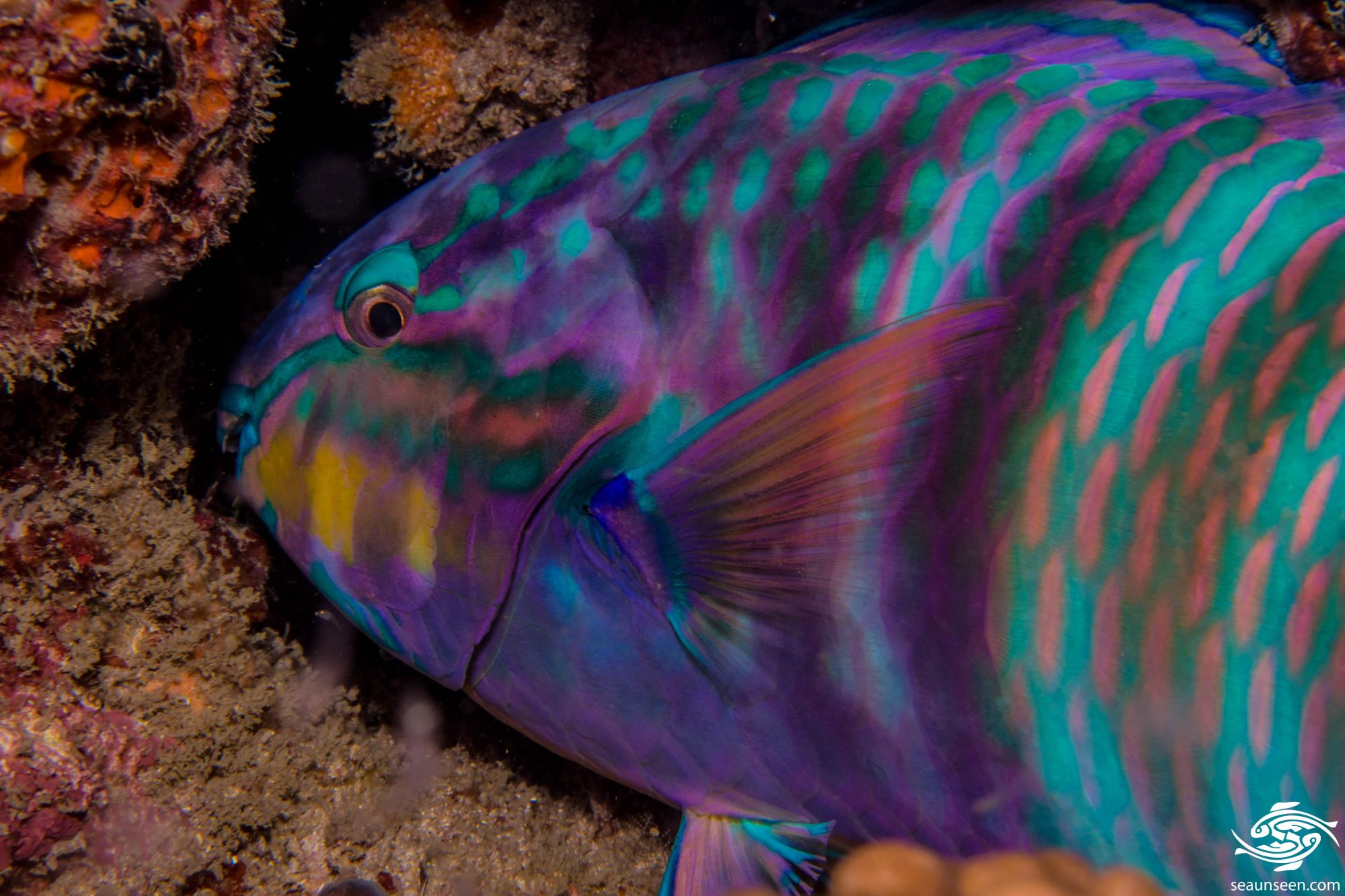 TRICOLOR PARROTFISH IN THE WILD

As a juvenile the Tricolor parrotfish often feeds on the shallower reefs at around 10 to 15 meters with groups of Rabbitfish , Goatfish, Wrasse and smaller Surgeonfish.  They continue this habit even as they mature into males. The females are singular or form groups of two or three specimens. 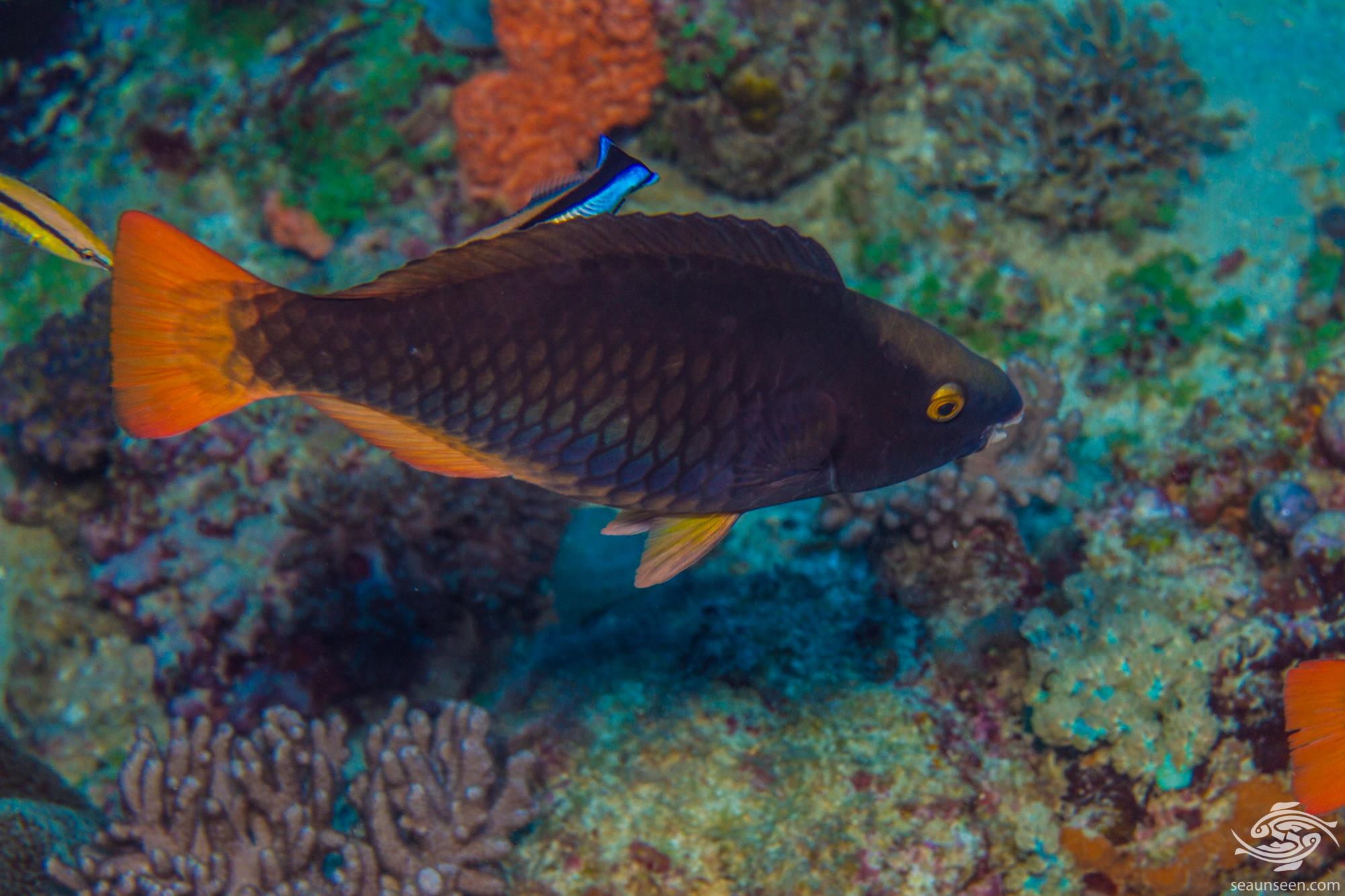 The Tricolor Parrotfish is found across the Indian Ocean from East Africa into the Pacific as far south and east as the Great Barrier Reef and across to the Pacific Islands including .  They are found as far north as the Ryuku Islands south of Japan. They have also migrated into the Eastern Mediterranean up the Suez canal and have been found in Lebanon. 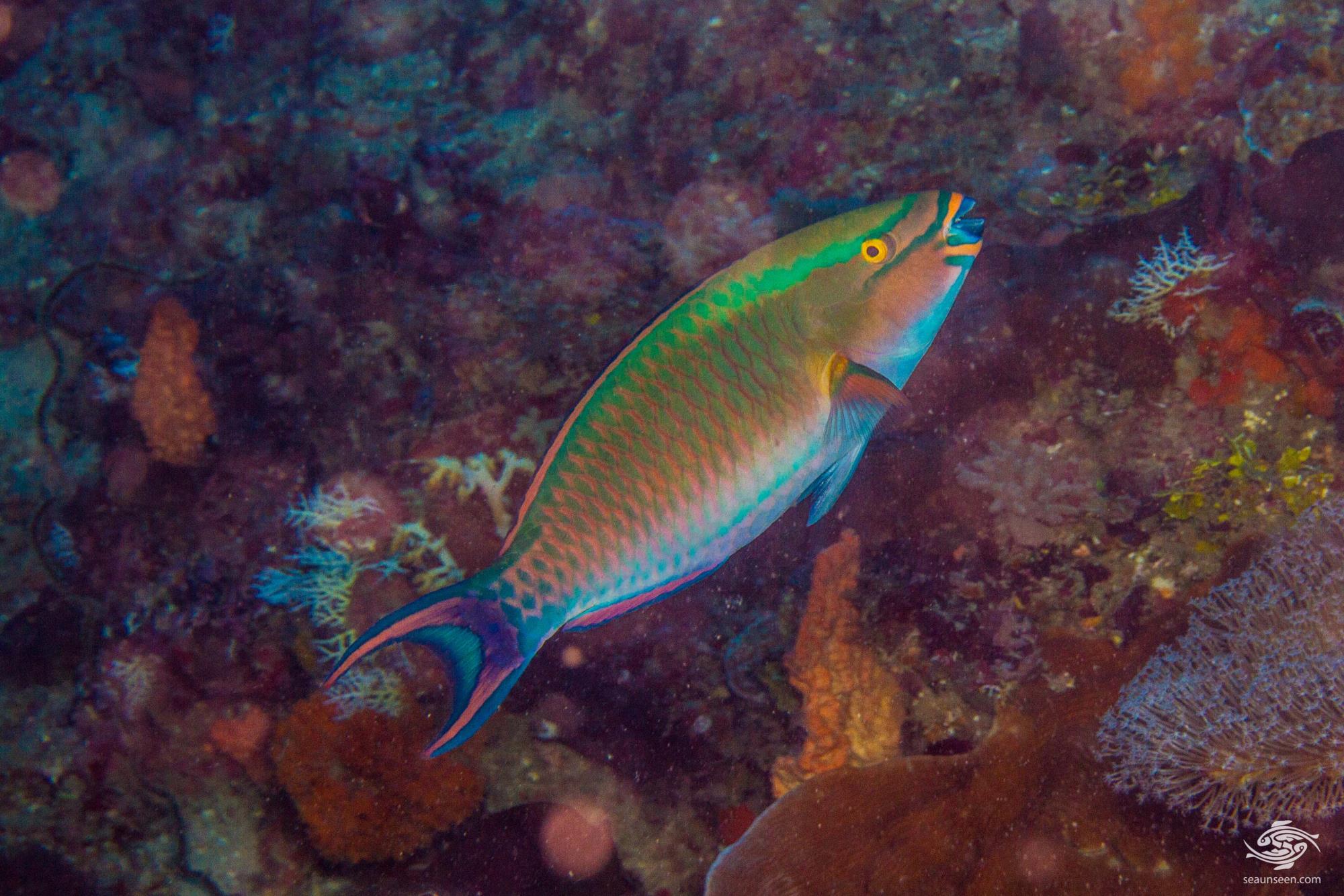 The Tricolor Parrotfish feed on a variety of  filamentous algae which is scraped off dead coral using their powerful beaks. These scrapings which are mainly comprised of inorganic matter are further ground down by bony teeth plates and then go into a long specialized alimentary canal where nutrients are extracted.  The inorganic matter is expelled as fine sand. 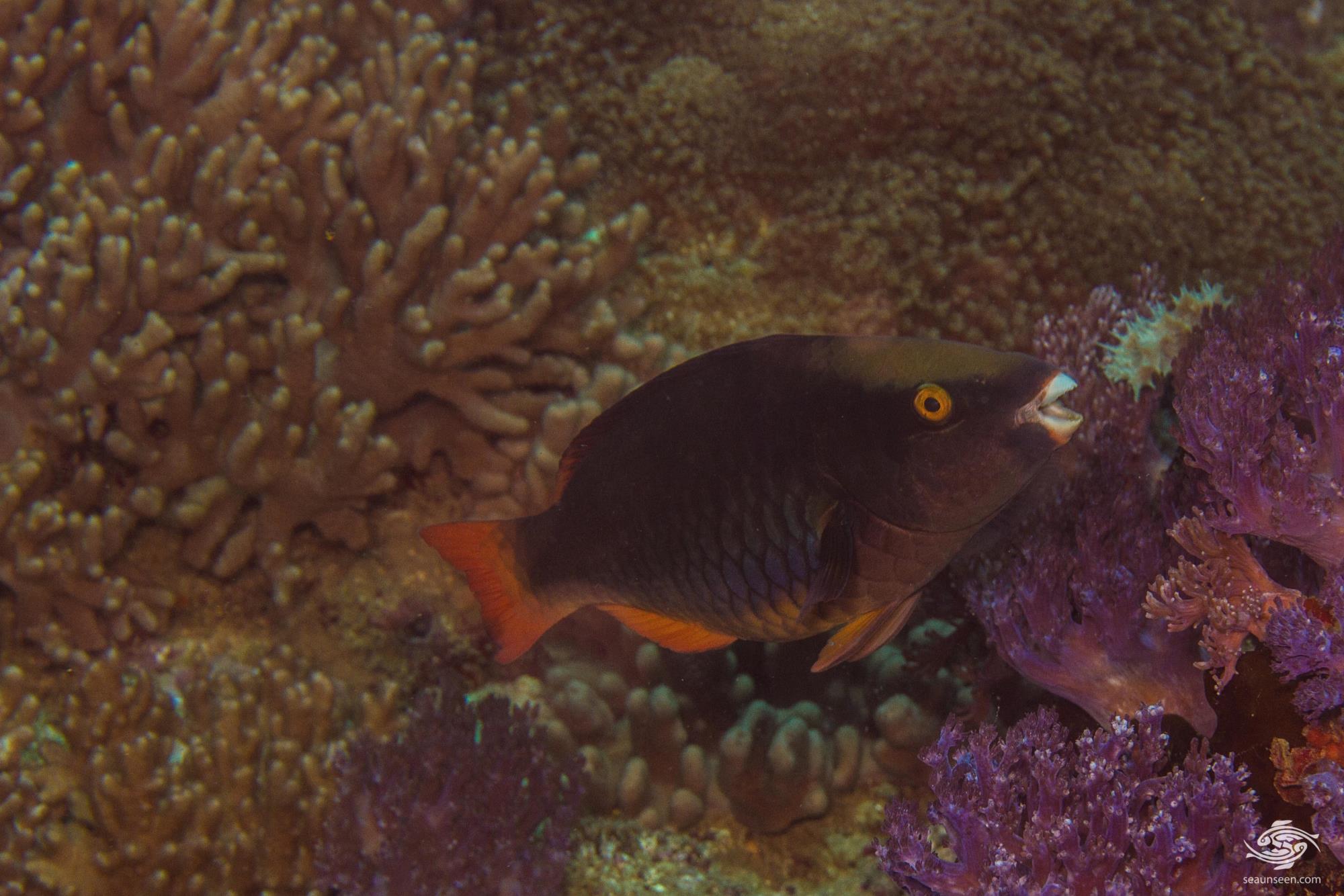 Parrotfish are sequential hermaphrodites and most initial phase specimens are females and the terminal phase are males.  Individual pairing takes place and the eggs are released into the substrate.  During the breeding season which seems to occur between spring  and autumn. During this time the males become more territorial and will chase smaller males out of their territory.

Interestingly in a genetic study done in the Philippines in three different areas full siblings and half siblings were found at sites more than 500 km apart. This indicates that the eggs or larvae are widely distributed by the currents. 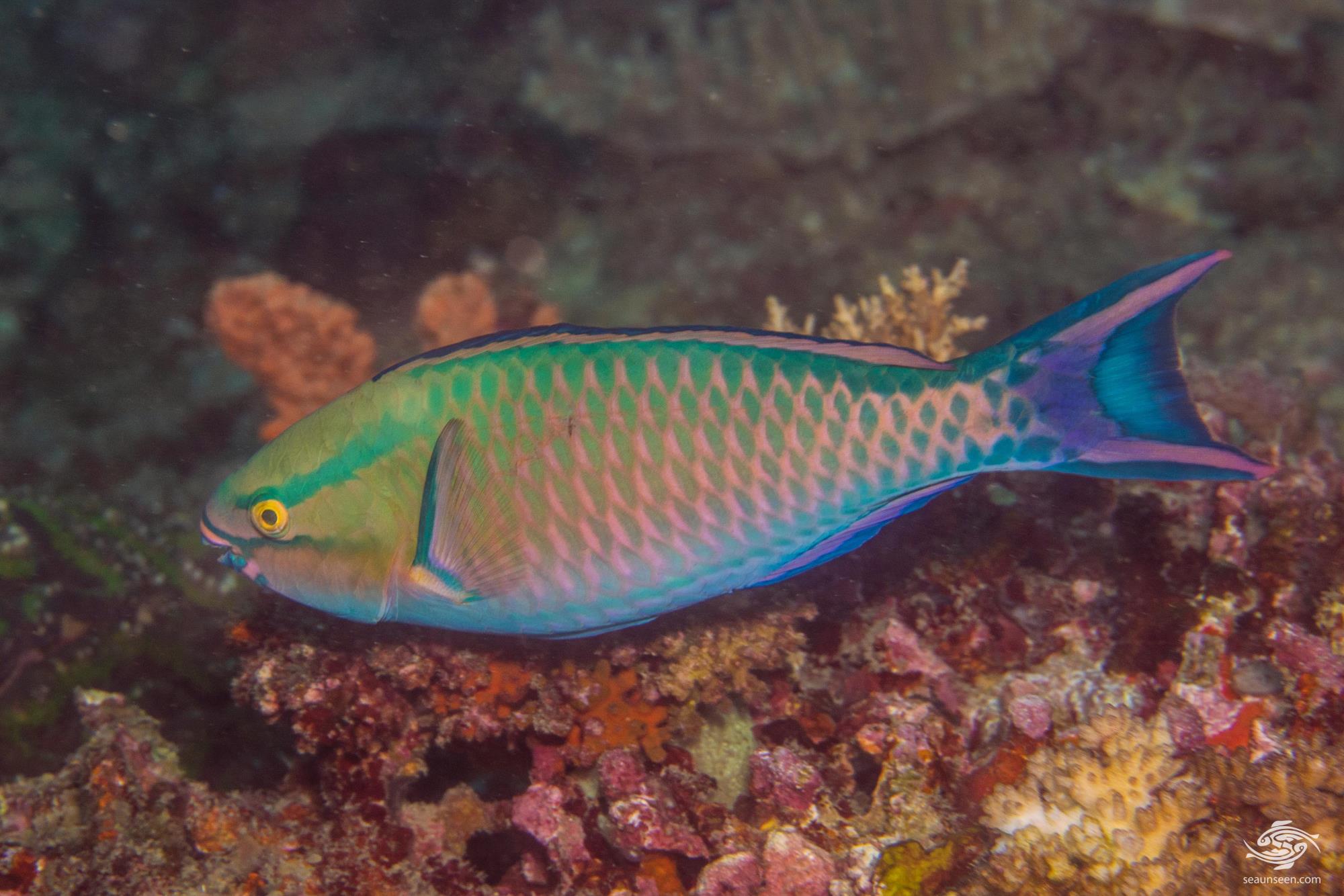 Tricolor Parrotfish are not commonly kept in aquariums although some public aquariums may occasionally keep them for public display. This is both a function of their size and the difficulty in providing them with food. 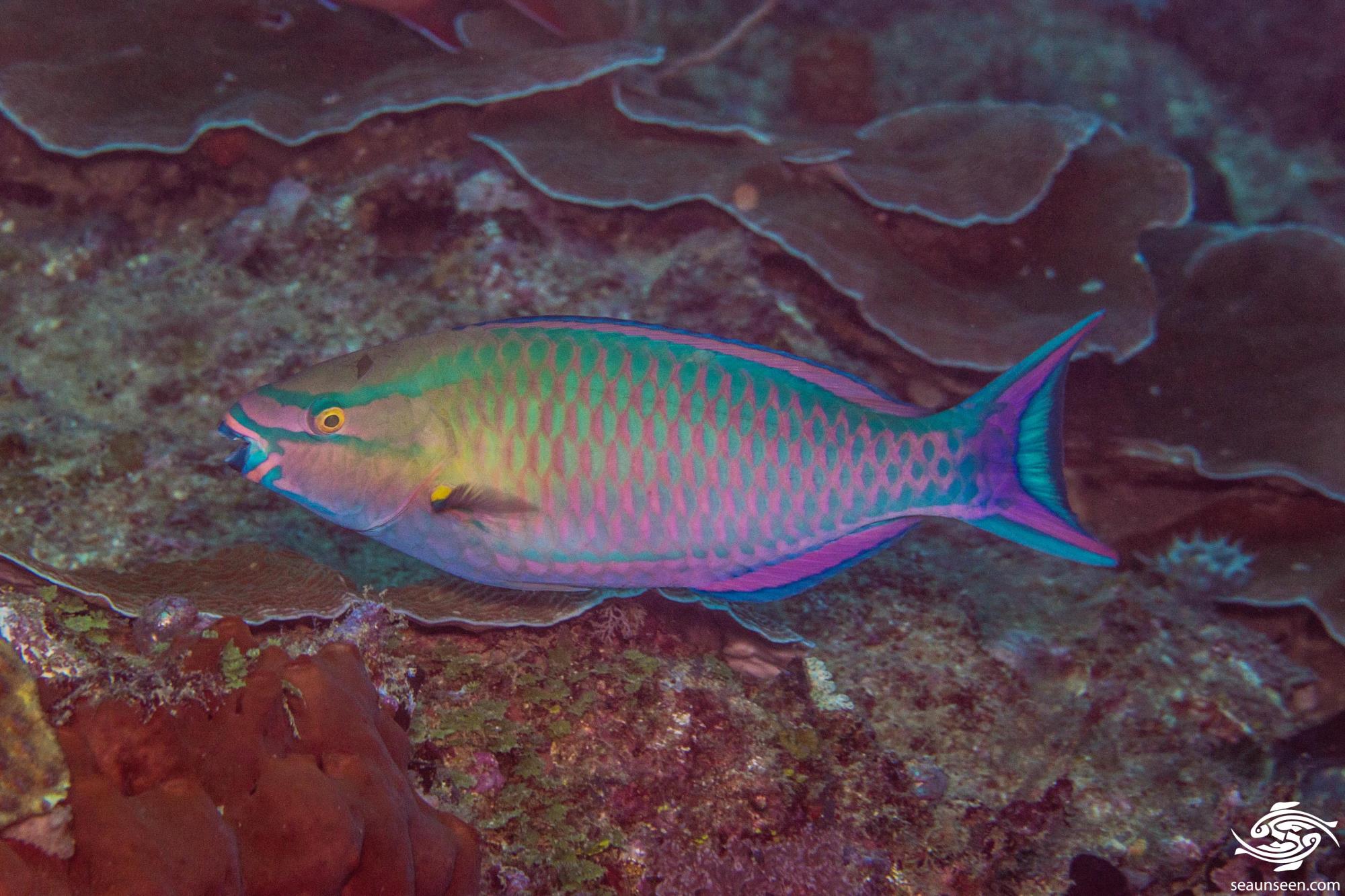